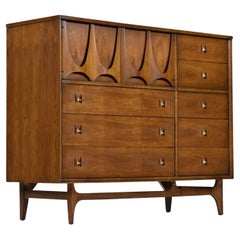 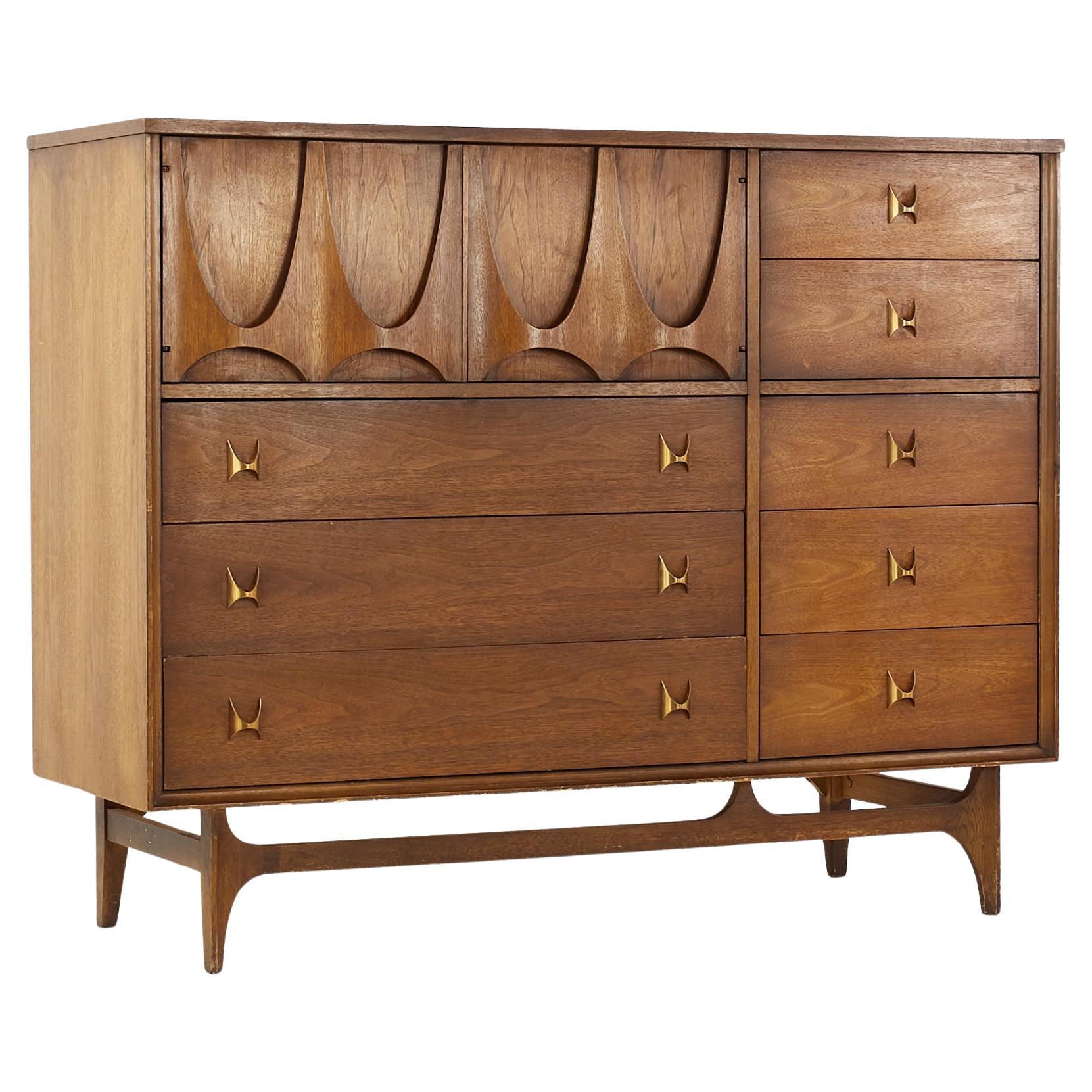 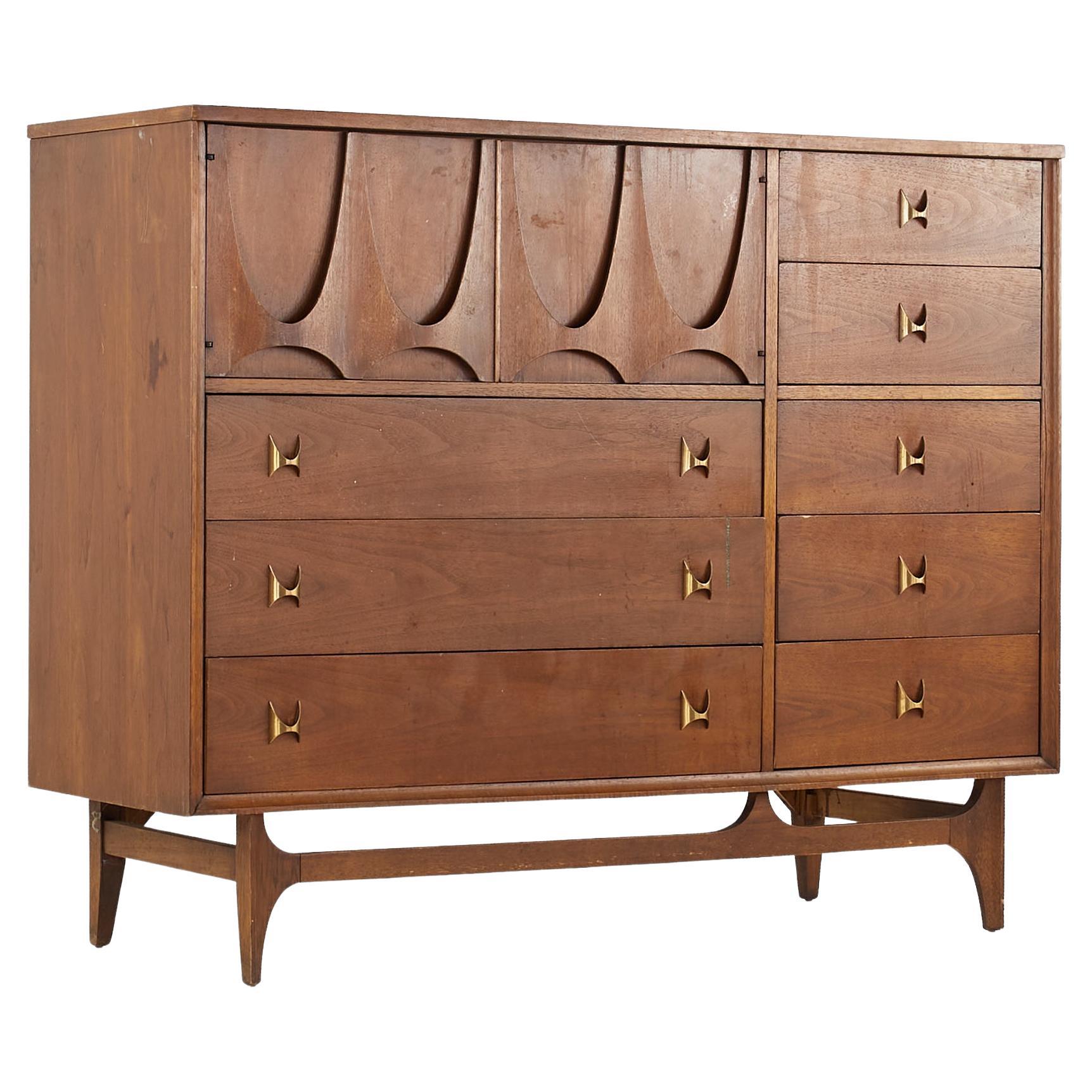 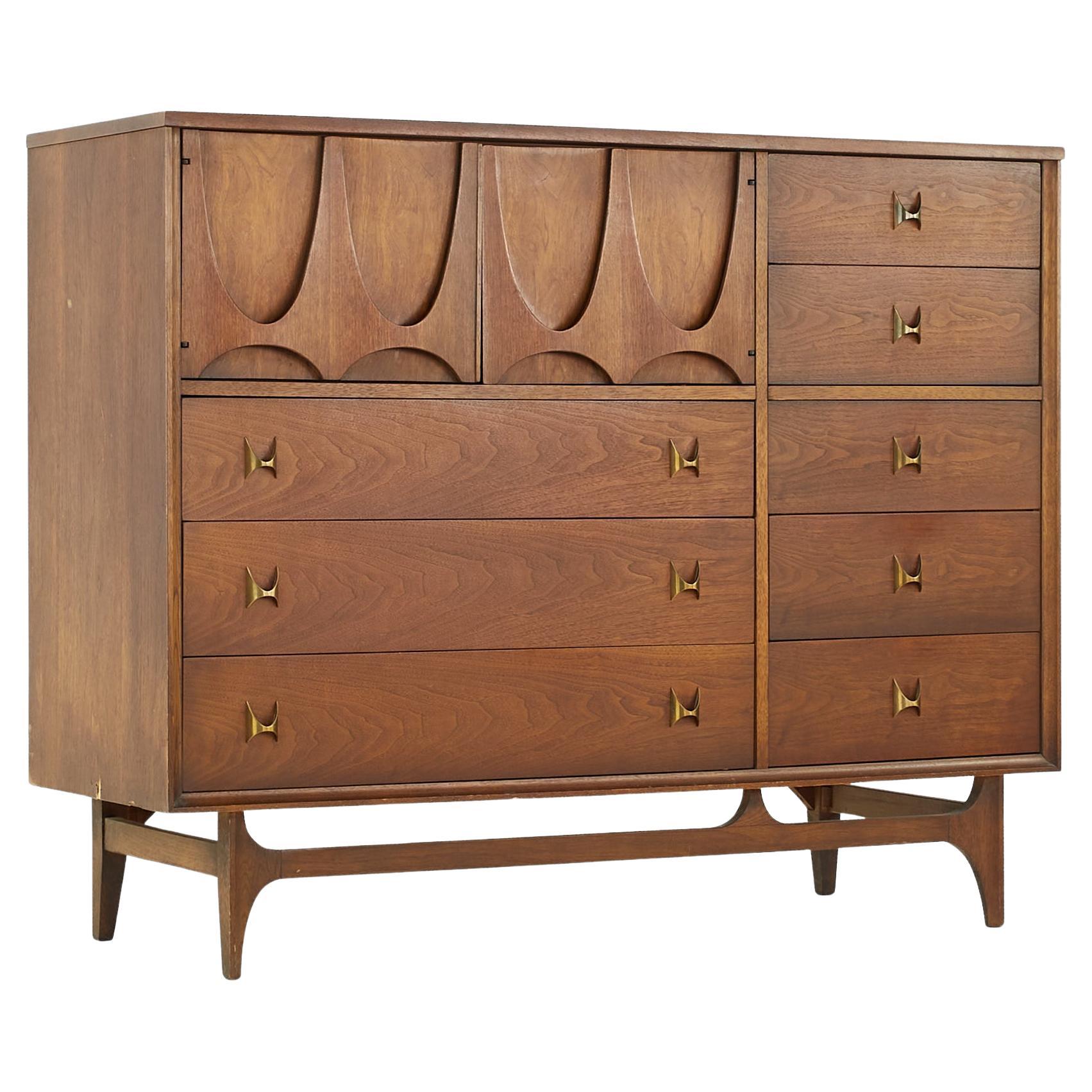 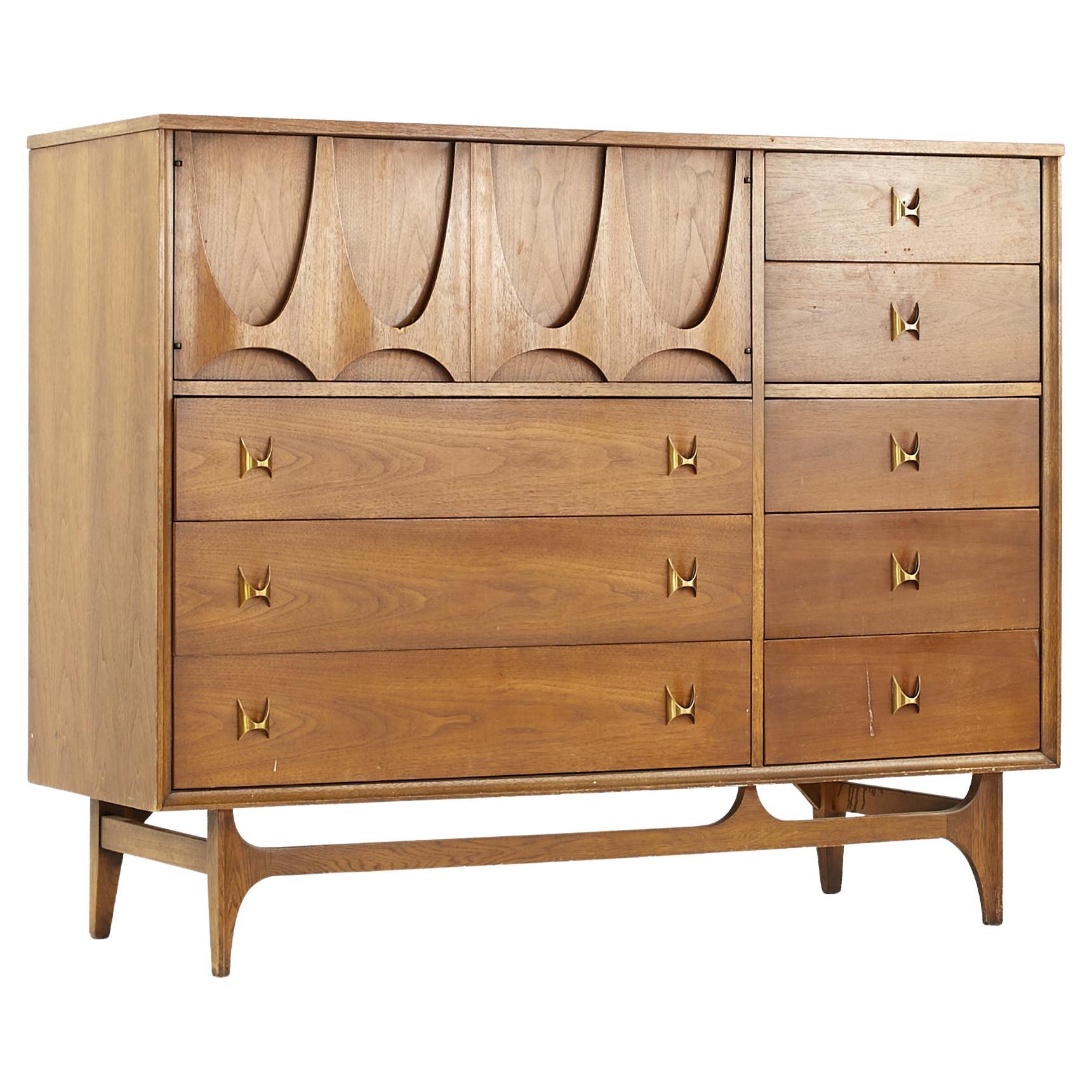 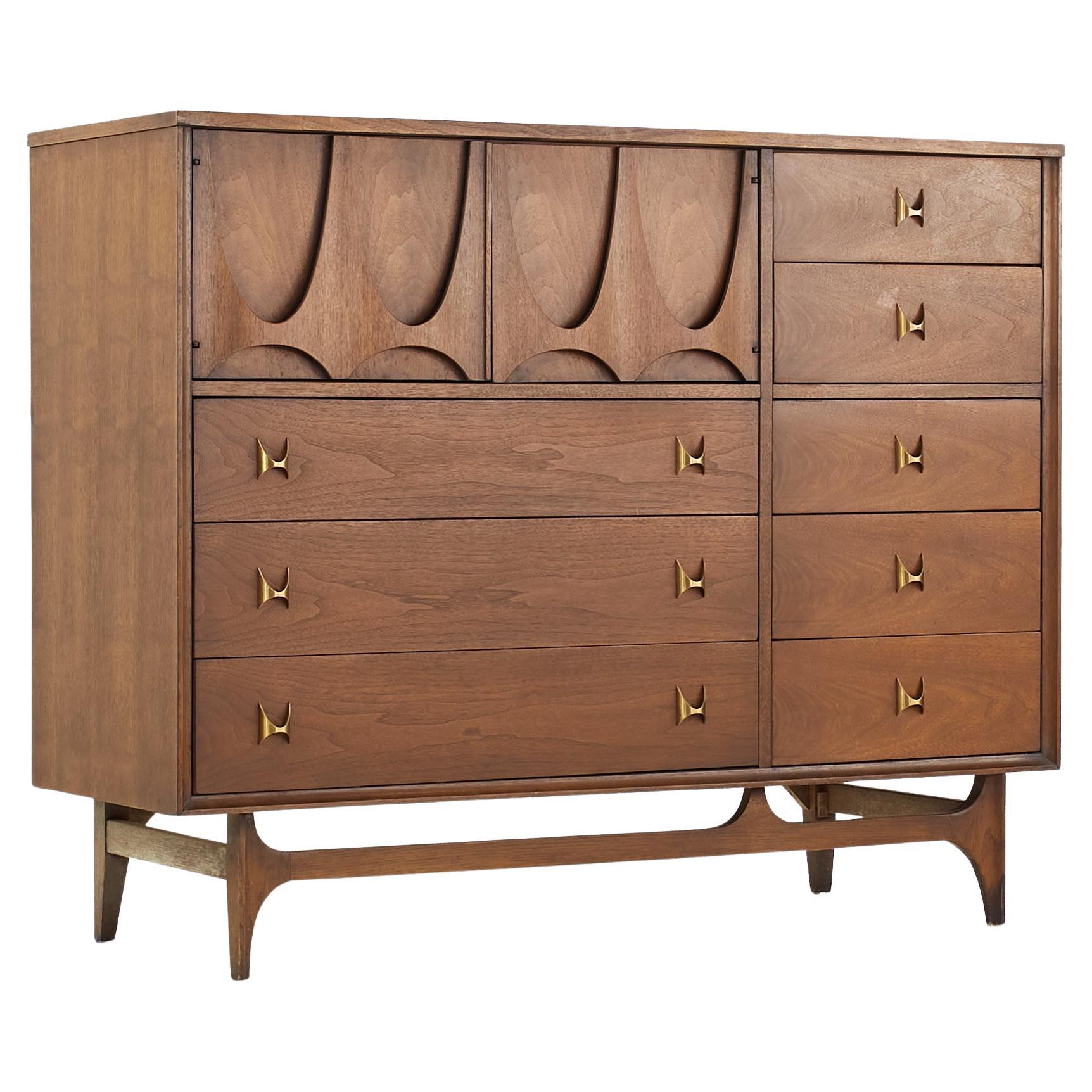 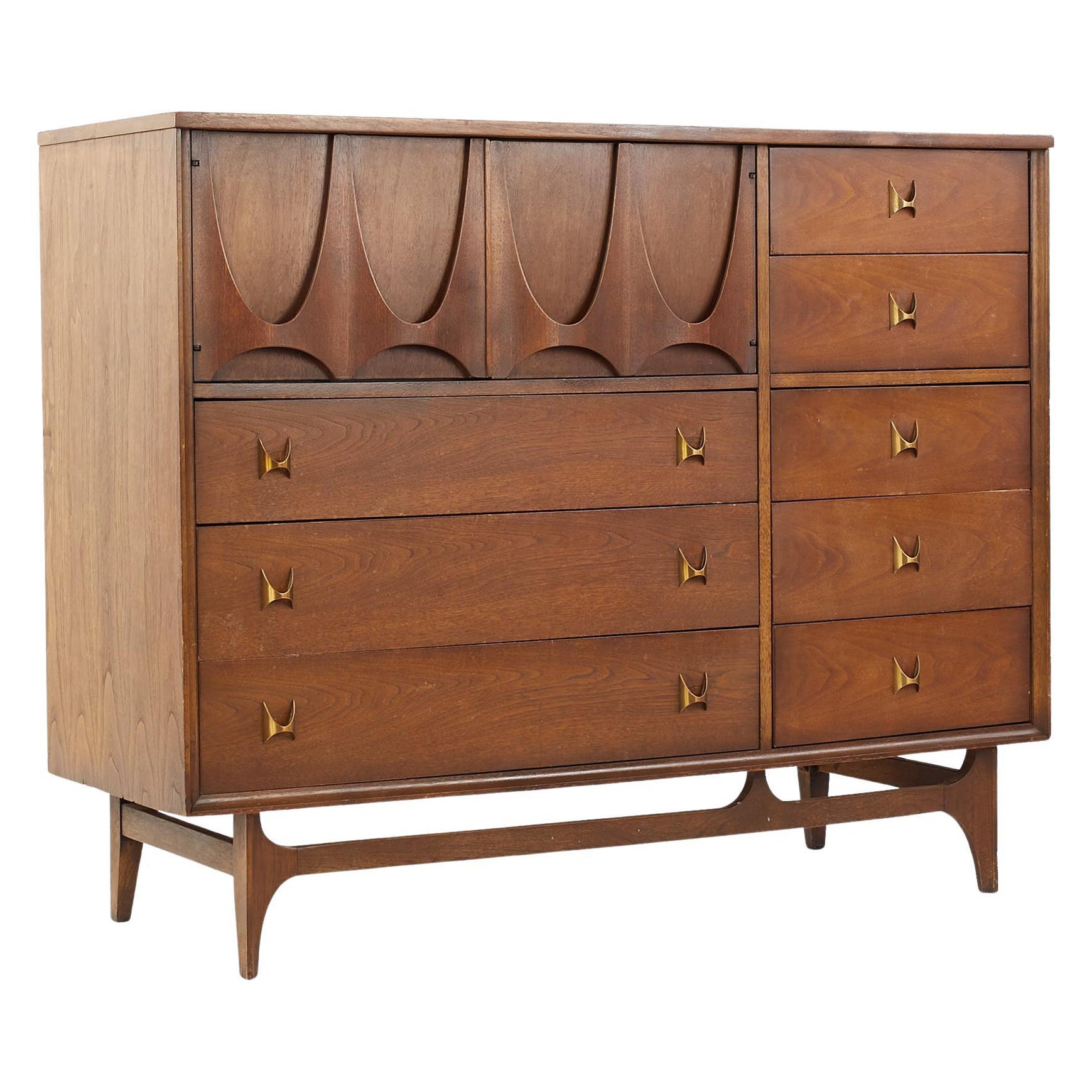 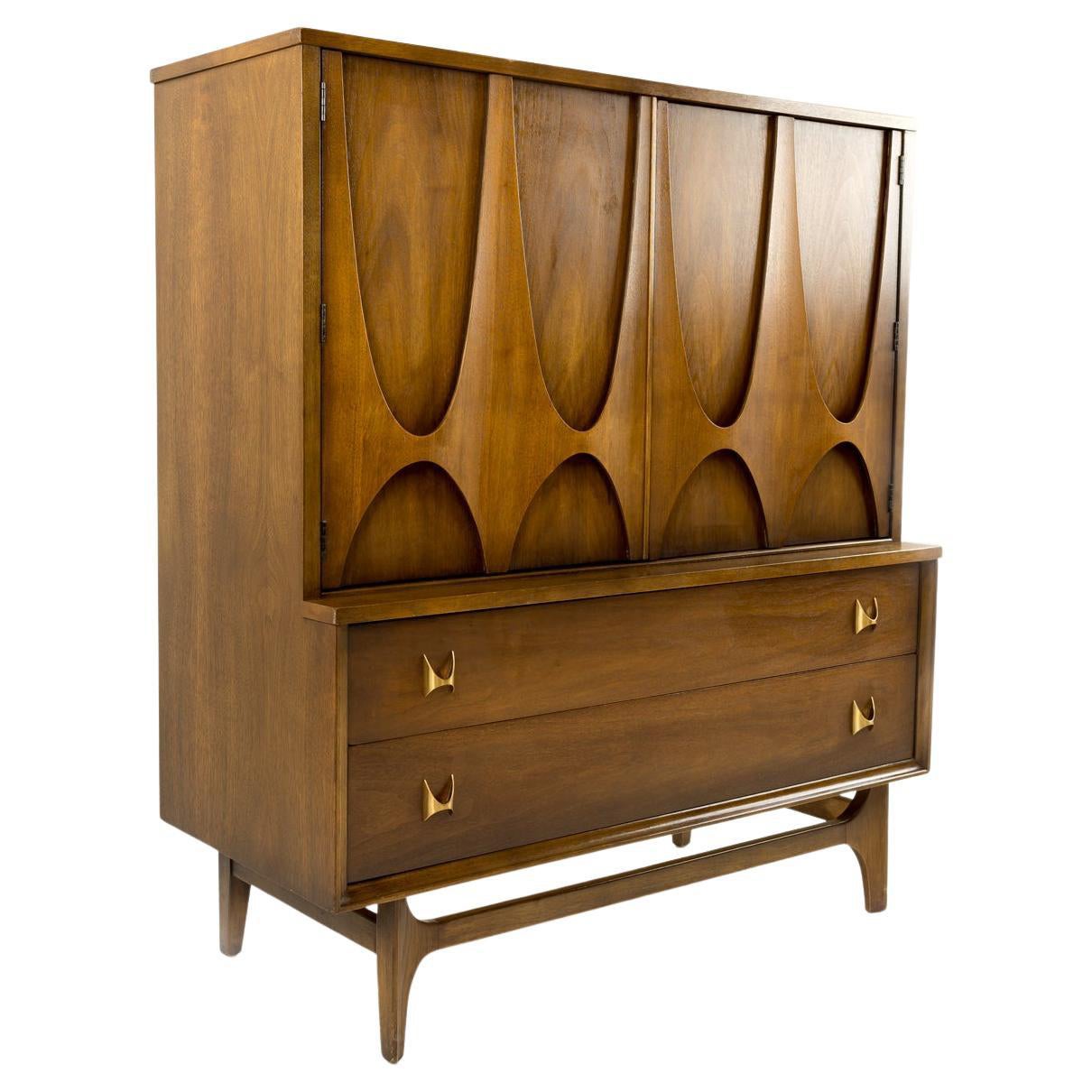 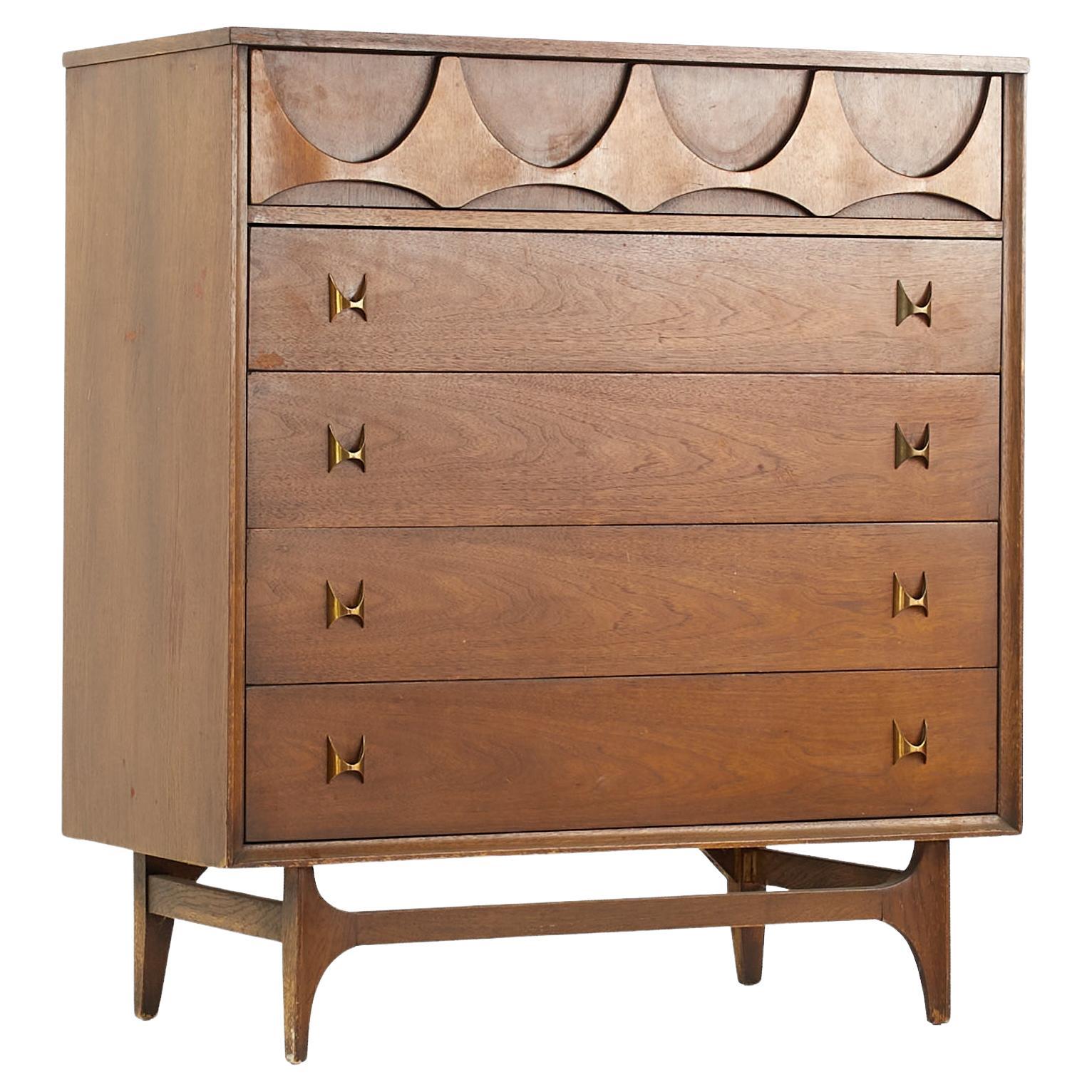 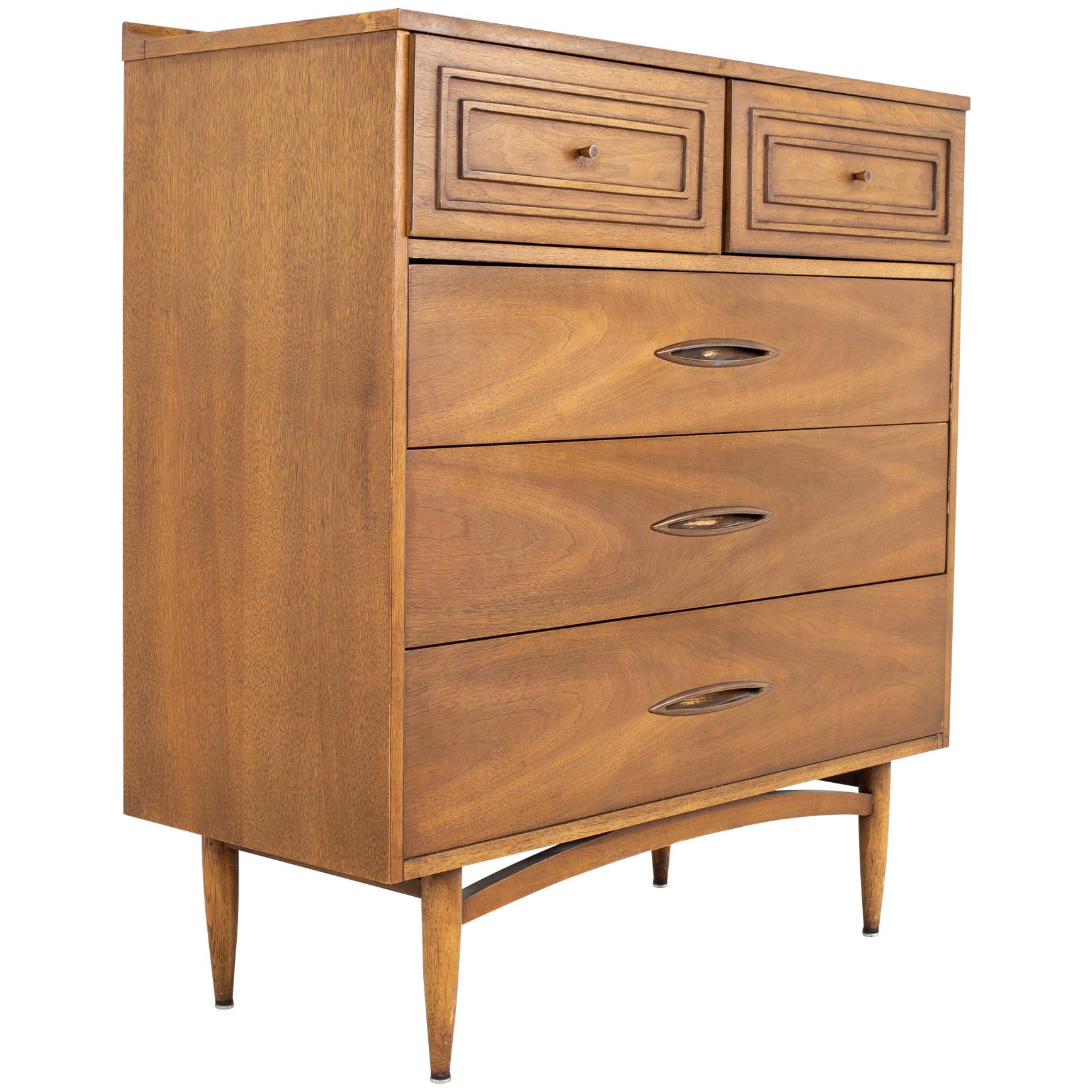 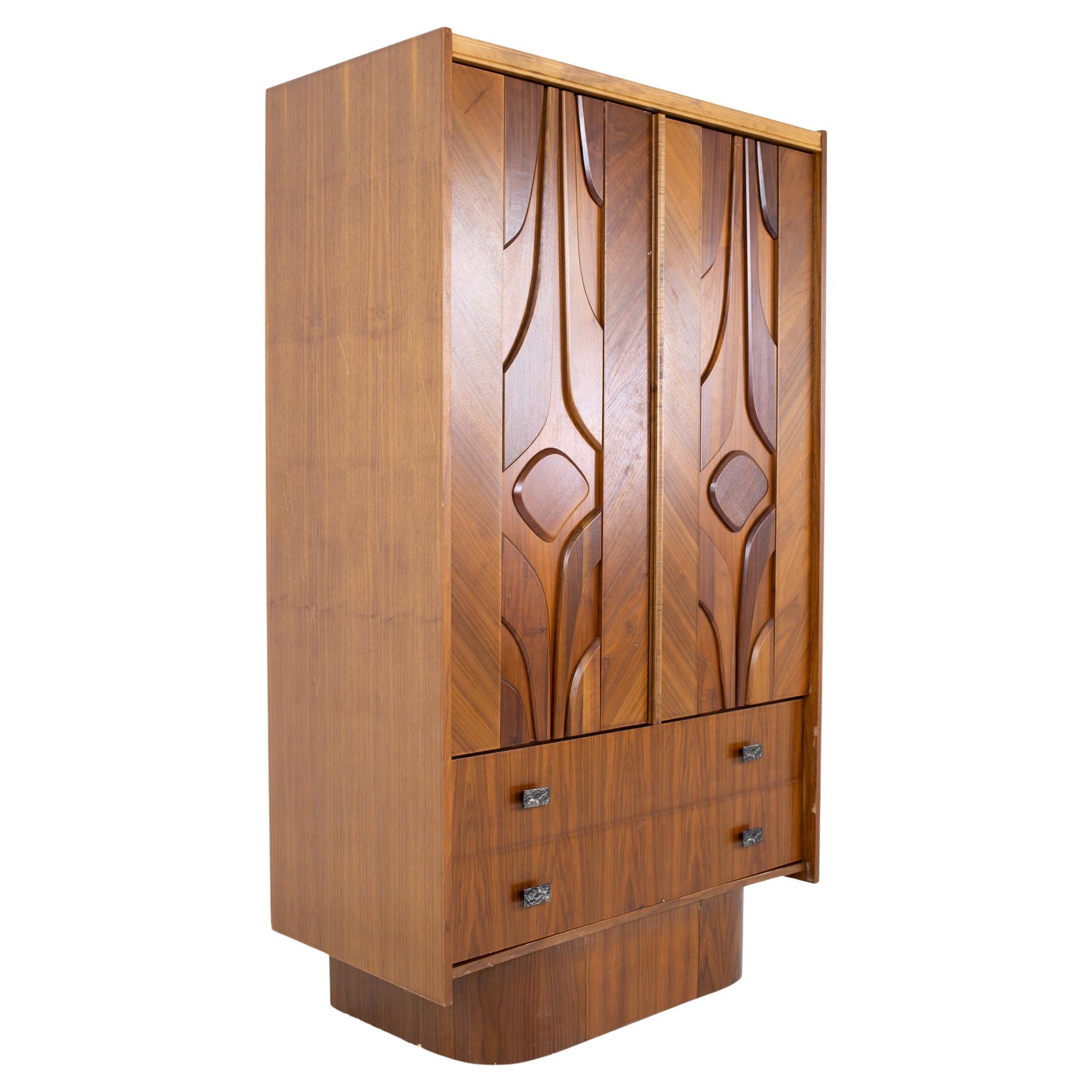 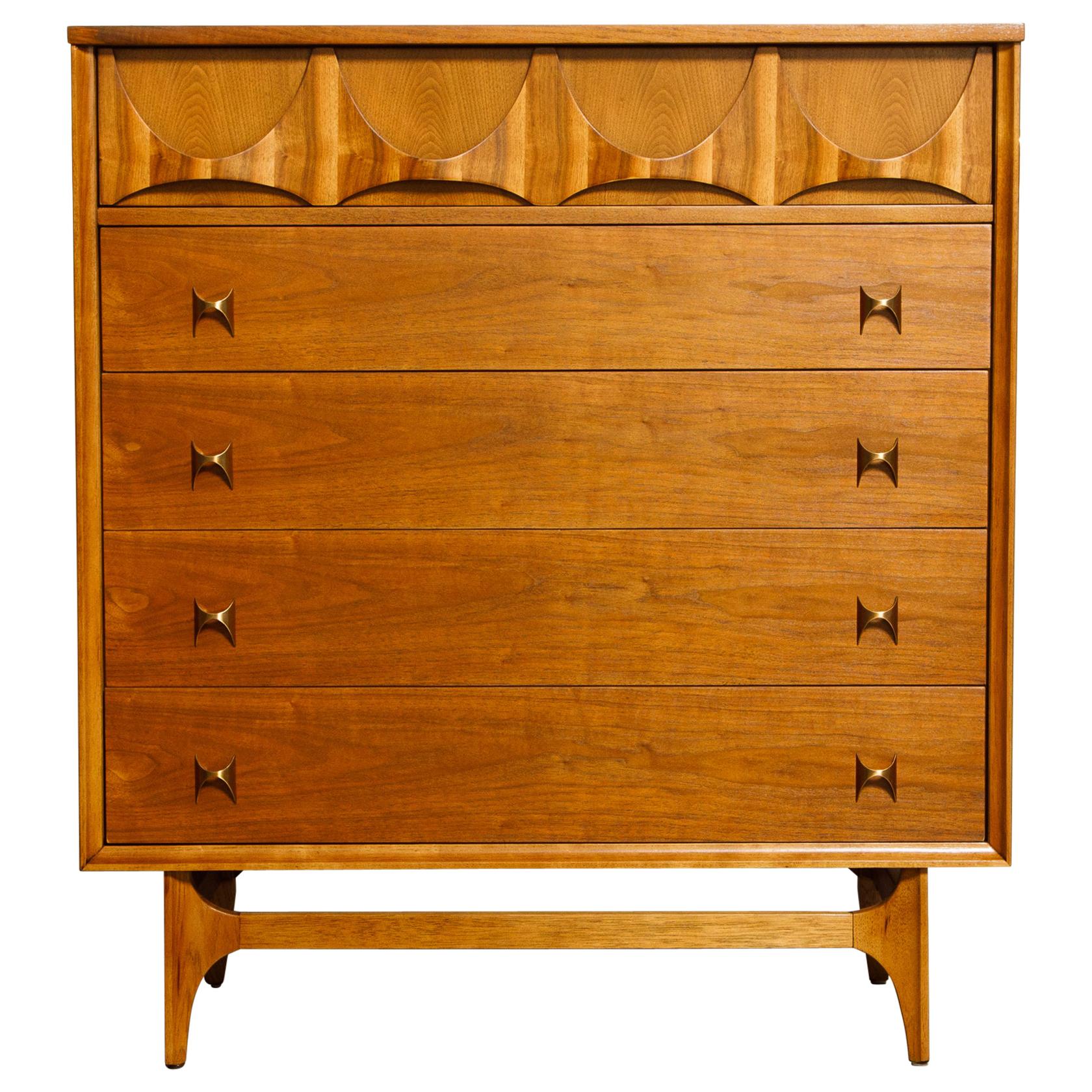 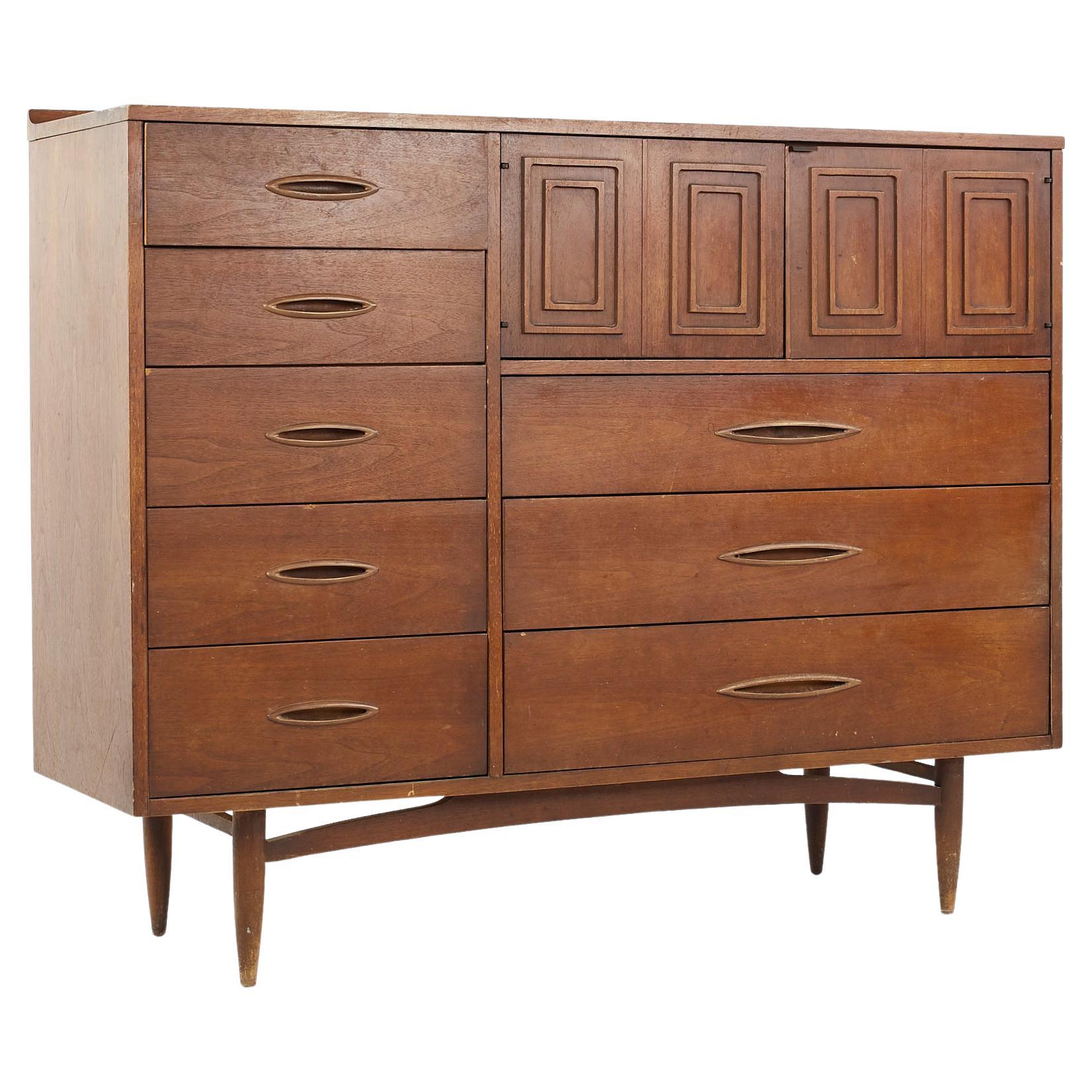 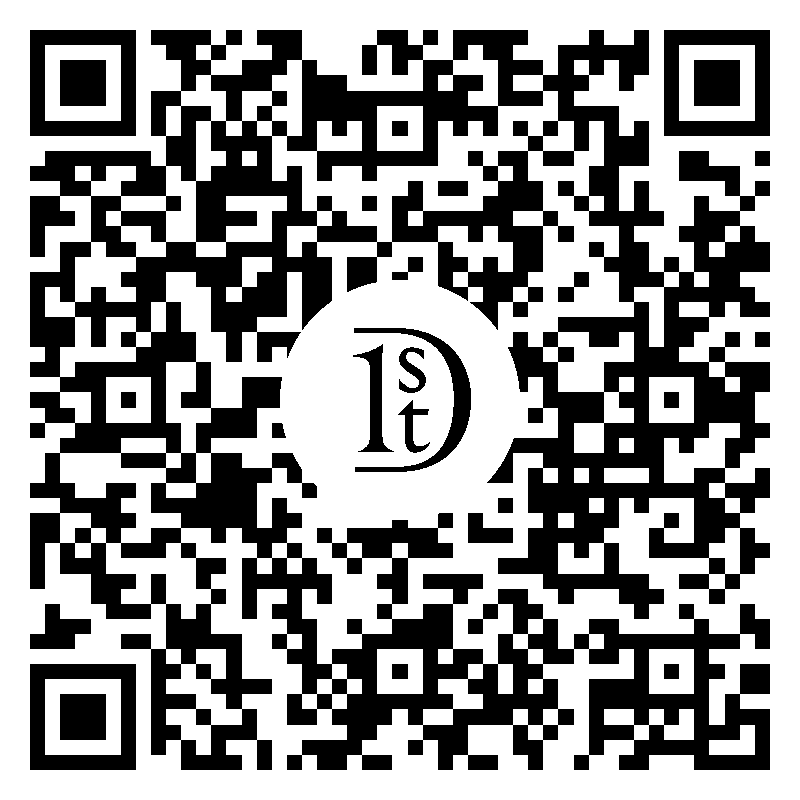 This "Magna" dresser was delicately restored to preserve the original patina. The Brasilia line has elevated to a high-end status that has made these pieces very sought after and subsequently harder to find. We love this line and have never seen two pieces that look identical. Not only because of the variations in walnut grain, but the way that they age. We did our absolute best to recondition this armoir while preserving the rich, oily patina. The top was professionally refinished by our in-house cabinet shop to match the original and untouched sections. We're certain you won't be able to tell the difference. It's a delicate balancing act to maintain originality while also recondition issues that need improvement. It's a process we are continuing to perfect. Otherwise detailed top to bottom, inside and out. The metal tracks have been oiled to make sure the drawers open effortlessly. We're certain you won't find a more sublime example of this dresser anywhere. Mid-Century Modern Broyhill Brasilia Magna Dresser chest of drawers. Vintage 1960s. One of the most sought after American furniture lines of the period. Walnut wood construction with Oscar Niemeyer's iconic inverted inverted diamond arches. In addition to the plentiful drawers, the top left features open cabinet space. Open the sculpted, hinged, arch doors to reveal vertical dividers. All original brass hardware in excellent condition. The Brasilia line by Broyhill was created in 1962. The signature lines and waves of Brasilia furniture were inspired by the distinct architecture of the city of Brasilia, the capital of Brazil. The city of Brasilia was planned and developed between 1956 and 1960. When viewed from above, the city’s shape resembles a plane or bird, which is mimicked on much of Broyhill’s original fabric and tiles. Most of the city’s architecture was the vision of a man named Oscar Niemeyer. Some of his most notable works are the Palacio de Alvorada and the Cathedral of Brasilia. These both feature clean lines and simple, modern design. What stands out most about the architecture is the use of hyperboloid structures, as in the cathedral and it’s parabolic columns, which are said to represent two hands moving upwards towards heaven. This particular building is one of Brasilia’s most recognizable attractions, due to its unique design and grand scale. When viewing the architecture of Brasilia, it is clear to see the inspiration in the design of the Broyhill Brasilia line of furniture. This line was first featured at the Seattle World’s Fair in 1962 representing the city of Brasilia. These unique pieces were created throughout the 1960s in various forms similar to this Brasilia Magna Dresser. 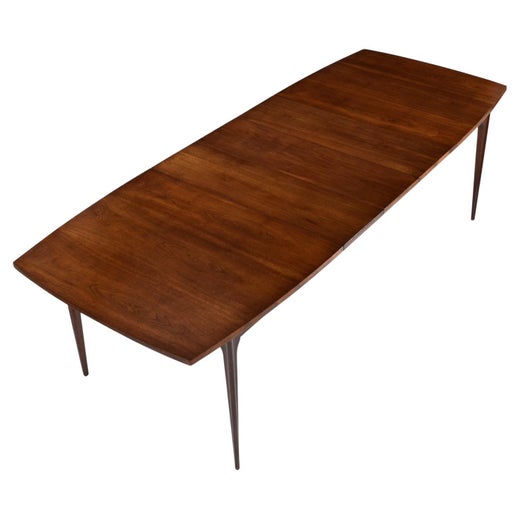 Oscar Niemeyer made modernist architecture sexy. In his signature designs, such as those for the planned capital city of Brasília, Niemeyer created a distinctively buoyant architectural vocabulary of sweeping curves, flowing lines and organic forms (attributes that also characterize his seductive furniture). As expressions of faith in the power of modern architecture and design to foster progress, Niemeyer’s buildings have a kind of heroic poetry.

“I am not attracted to straight angles or to the straight line, hard and inflexible, created by man,” Niemeyer would write in his memoirs. “I am attracted to free-flowing sensual curves.”

Nowhere would Niemeyer demonstrate his love of curvature more expressively and elegantly than in his designs for the principal buildings for Brasília, a project begun in 1956. The dramatic Congressional Palace features two stark towers flanked by a domed structure and a bowl-shaped edifice, for the upper and lower legislative houses. He placed the Palácio da Alvorada (the presidential residence) on a small peninsula jutting into a lake, so that the sequence of parabolic columns on its facade casts a mirror image on the water. Niemeyer’s grandest achievement was the city’s cathedral, a stunning composition of 16 arched vertical supports with tinted-glass interstices.

Four years after Brasília was completed, in 1960, Brazil’s elected government was overthrown in a military coup. Niemeyer, a member of the Communist party, was harassed continually by the junta. He left the country and did not return until democracy was restored, in 1985.

While in exile, in the early 1970s, Niemeyer began collaborating on furniture designs with his daughter, Anna Maria Niemeyer. Their best known pieces are seating furniture — the Alta lounge chair and ottoman and the Rio rocking chaise, which have flowing bases made of sheets of lacquered wood or stainless steel, share the aesthetics of Niemeyer’s architecture.

The Alta’s deep, oversized seat pads nod — much like the chair designs of Niemeyer’s countryman Sergio Rodrigues — to the Brazilian penchant for long, languorous conversations. Examples of both designs are priced at about $20,000, depending on age, condition and materials. As you will see on these pages, Oscar Niemeyer’s furniture designs are sleek, sculptural, comfortable and elegant — as well as a compact emblem of the work of one of the great architects of our time. 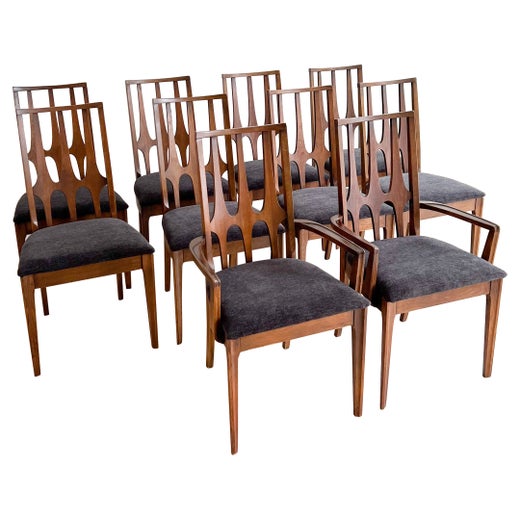 No other American mid-century furniture line has become as synonymous with a certain type of curvilinear decoration as Broyhill’s Brasilia group. While its revered cabinets, dressers, dining chairs and more were made in the United States, the inspiration for the distinguishing characteristics of vintage Broyhill Brasilia furniture can actually be found in Latin American architecture.

Broyhill Furniture Industries was launched in Lenoir, North Carolina by brothers Thomas H. and James Edgar “Ed” Broyhill. Ed had been working for his brother’s furniture manufacturing company, the Lenoir Furniture Corporation, which produced bedroom furnishings in the 1920s, when a nearby supplier’s factory, Bernhardt Chair Company, burned in a fire. Ed founded Lenoir Chair Company and expanded its operations while remaining an employee at Lenoir Furniture Corporation. He subsequently partnered with Thomas and together they purchased Harper Furniture Company, a local producer of Colonial Revival-style furniture, in 1929. By the 1940s, Broyhill Furniture Industries had absorbed more factories and gained footing as a strong competitor of Lenoir’s Kent-Coffey Manufacturing Company and a rebuilt Bernhardt Furniture.

In the mid-1950s, responding to changing tastes and to an appetite for what is now universally known as mid-century modern furnishings, the firm launched its Broyhill Premier line with the Sculptra series. Sculptra pieces featured a square-within-a-square motif and horizontal cat’s-eye-shaped drawer pulls. Later, in 1962, the Broyhill Brasilia furniture group debuted at the Seattle World’s Fair. The collection was heavily inspired by Oscar Niemeyer’s modernist buildings for the eponymous Brazilian capital.

About the Seller
4.9
Located in Chattanooga, TN
Platinum Seller
These expertly vetted sellers are 1stDibs' most experienced sellers and are rated highest by our customers.
Established in 2010
1stDibs seller since 2016
454 sales on 1stDibs
Typical response time: <1 hour
More From This SellerView All
People Also Browsed
You May Also Like 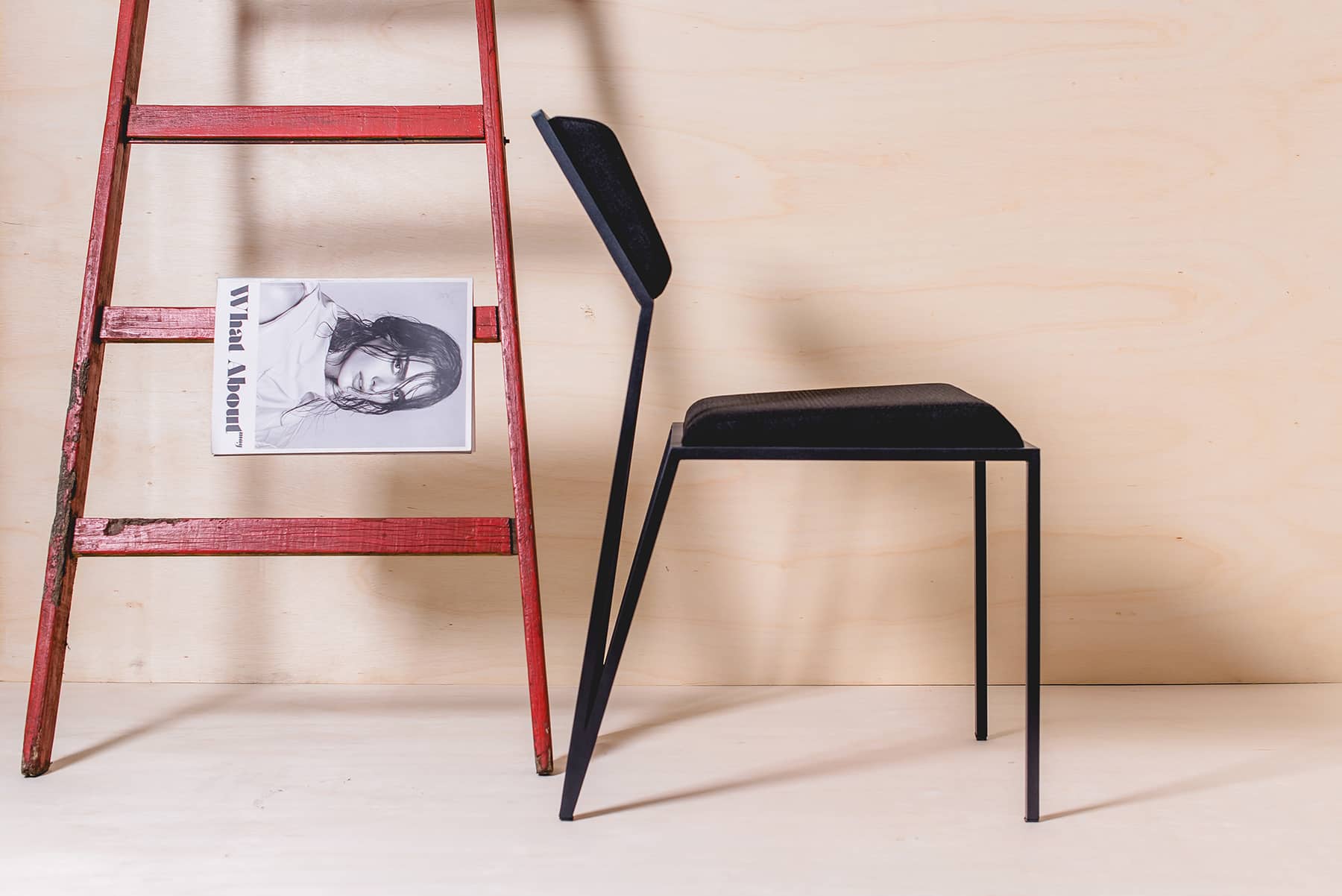