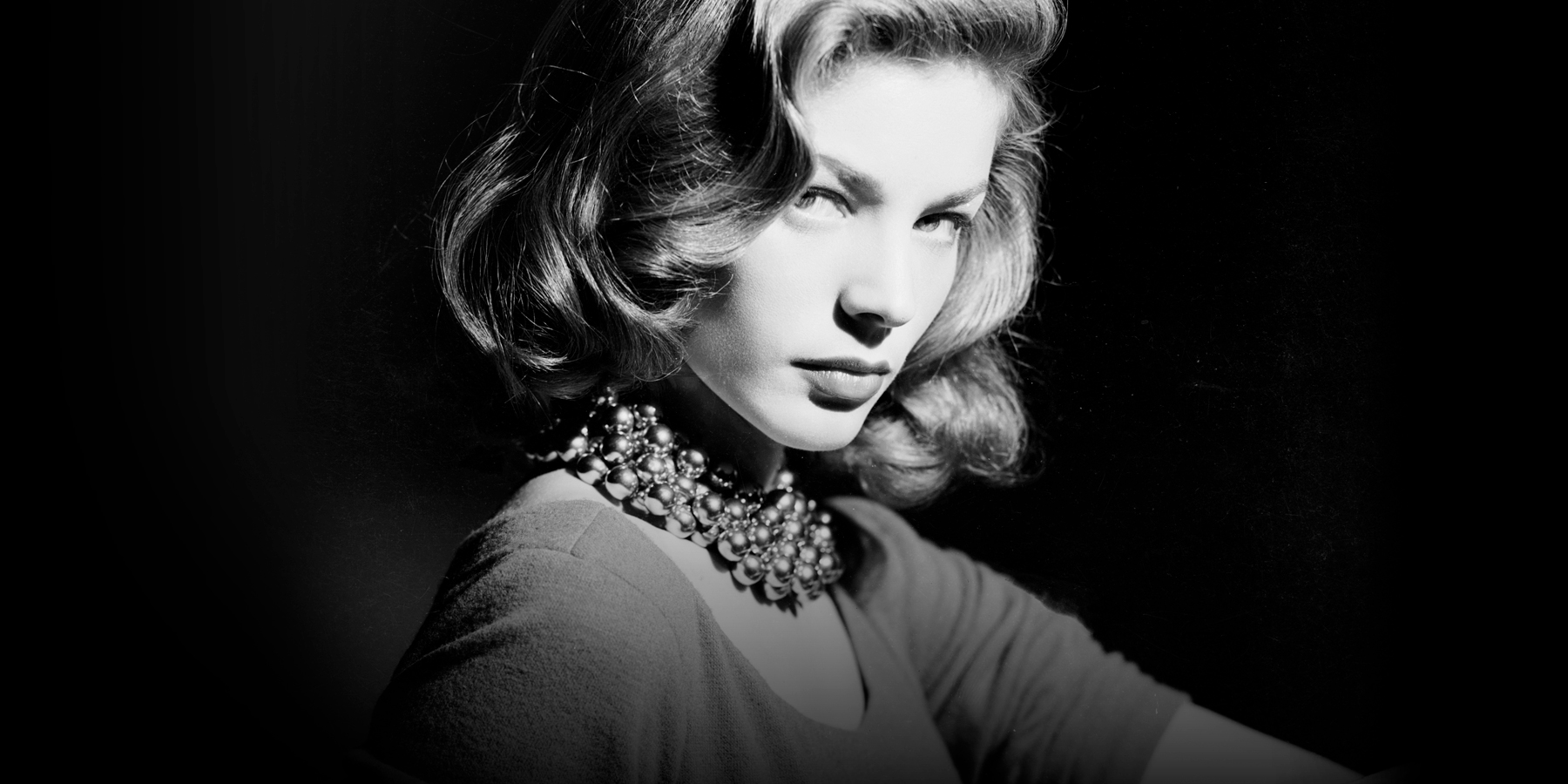 Classy, elegant, and entertaining. That's how screen siren Lauren Bacall envisioned a show at New York's Fashion Institute of Technology of her couture collection, which she bequeathed to the institution. Now realized, the FIT exhibit showcases 16 prized outfits of Bacall, who died in August at the age of 89. 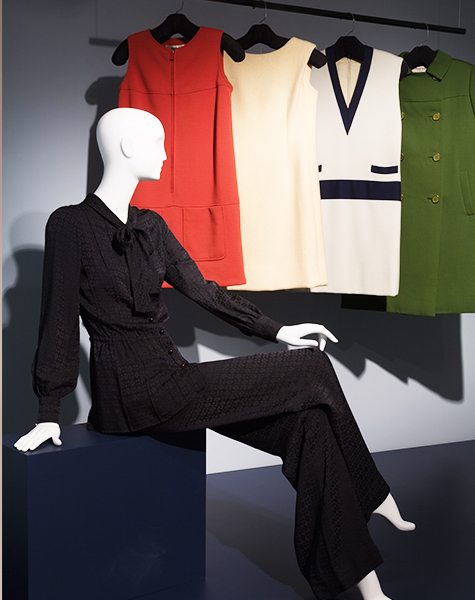 March 16, 2015A current show at New York’s Fashion Institute of Technology, which shines the spotlight on the wardrobe of the eternally stylish Lauren Bacall, includes this silky black ensemble by Emanuel Ungaro (all images courtesy of the Museum at FIT unless noted). Top: The screen siren, who died last August at age 89, made her name with such films as 1944’s To Have and Have Not (photo via John Kobal Foundation/Getty Images)

Let us forget, for a moment, the smoldering Lauren Bacall “Look” — her chin lowered to her chest, fierce eyes peering up from beneath lowered lids amid face-framing waves of golden-brown hair, groomed brows and bold red lips — and pay homage to her equally stirring fashion sense. Although her casual elegance was in many ways inseparable from her physical beauty, Bacall, who died last August at the hearty age of 89, chose attire that would complement and not supplement her appearance.

The tough-talking dame of such films as To Have and Have Not, The Big Sleep, Key Largo and Designing Woman, Bacall considered fashion shows to be “boring,” but she nonetheless amassed an iconic collection of couture and ready-to-wear pieces that firmly established her in the fashion firmament. From 1968 to 1986, Bacall donated 700 pieces from her formidable closet to New York’s Fashion Institute of Technology (FIT), which prior to her death had already planned an exhibit of her garments. The notion pleased Bacall. The spunky yet modest screen siren’s one request? That it reflect the wit and esprit of her friend Diana Vreeland: “classy, elegant and entertaining.”

Bacall would be amused by the result, a show called “Lauren Bacall: The Look” that runs through April 4 at The Museum at FIT. Above all, she prized refined gracefulness, and FIT’s pithy tribute — a student-curated, carefully selected 16 outfits, drawing on pieces primarily from the 1960s and ’70s, in addition to numerous film clips and images by such photographers as Louise Dahl-Wolfe — encapsulates what the fashion designer Peter Som recently called Bacall’s embodiment of “this idea of effortlessness. It’s like she was never trying too hard, and I think that is sometimes the most difficult thing to achieve…an innate sense of how to wear things, or not. How she carried that off was magic.” 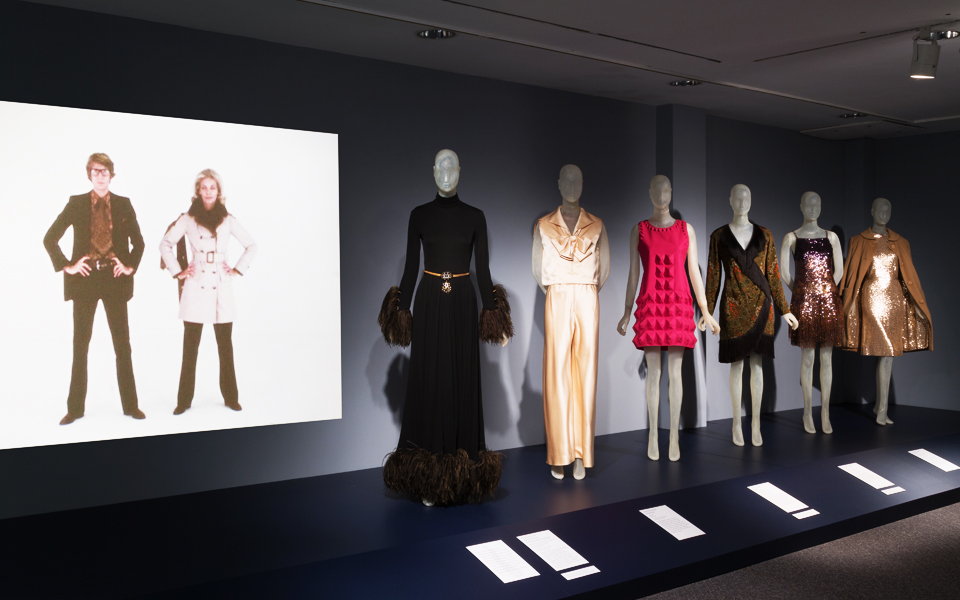 A selection of of Bacall’s garments are displayed alongside a still from a 1968 television special called Bacall and the Boys, in which the actress examined work by such fashion designers as Pierre Cardin, Emanuel Ungaro, Christian Dior’s Marc Bohan and Yves Saint Laurent, who’s seen with her here. 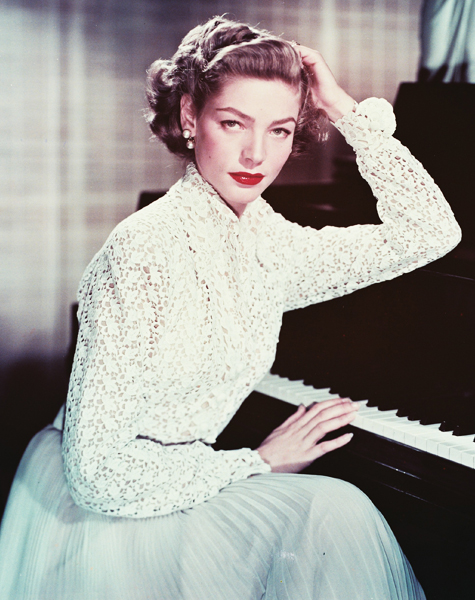 Born as Betty Joan Perske in the Bronx, Bacall first achieved success as a fashion model in New York — Diana Vreeland claims to have discovered her for Harper’s Bazaar, on whose cover Bacall appeared in 1943, shot by Louise Dahl-Wolfe. Photo by Silver Screen Collection/Getty Images

Indeed, the FIT exhibit captures the ease Bacall evidenced in always seeming to know exactly what clothing worked best for her. Unlike, say, Audrey Hepburn and her strong association with Hubert de Givenchy, Bacall was never wed to a single designer. Instead, she preferred to pluck an array of pieces from a group of talents she referred to as “her boys”: Marc Bohan (for Christian Dior), Pierre Cardin, Yves Saint Laurent, Emanuel Ungaro and Norman Norell. She was also partial to Halston, once quipping “I like to have Emanuel, Yves and Halston, all three, in my pocket wherever I go…just not in the same pocket.”

Despite its best efforts, Hollywood never fully got a grip on Bacall. She bucked the studio system, making only a handful of films and preferring instead to remain in her hometown of New York City, ensconcing herself at The Dakota amidst such neighbors as Leonard Bernstein and John Lennon. Her fashion code was “inherently New York,” observes FIT director Valerie Steele, with “its ability to blend the classic with the glamorous. There’s a certain sophistication.”

As a young model for a Seventh Avenue clothing manufacturer, the Bronx-born Bacall liked to scour the racks of Loehmann’s with her mother, looking for the odd piece by a famous designer like Norell. Later, she would form a friendship with the couturier, whom she admired for his precise sense of tailoring. A 1958 evening ensemble from the exhibit exemplifies the Norell-New York-Bacall axis: a conservative, light-brown cashmere “subway coat” that opens to reveal a shimmering silk jersey made of individually hand-sewn sequins. The contrasting pieces work brilliantly together — particularly when one removes the rather demure coat to great dramatic effect. It’s a perfect blending of the classic with the extravagant. 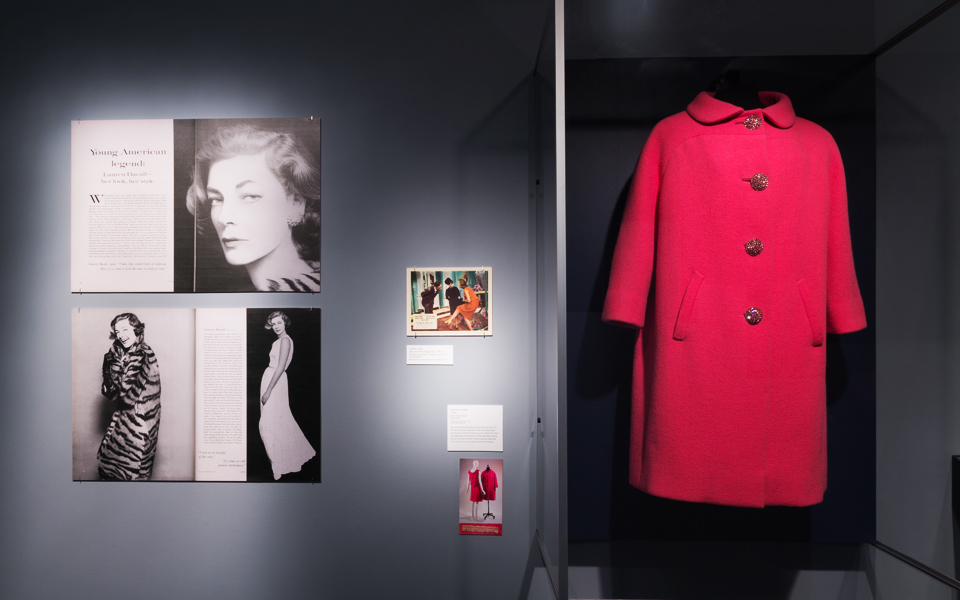 The show displays a 1959 Vogue spread featuring Bacall, photographed by Richard Rutledge, alongside a Norman Norell coat she wore in the 1964 film Sex and the Single Girl.

Not that Bacall shied away from the occasional risk. She fancied Pierre Cardin at the peak of his ’60s popularity. A sleeveless, pink, three-dimensional dress on display from 1968 is constructed so that all its geometric squares pop out from beneath. Made of a synthetic known as Dynel, which Cardin called “Cardine,” the material could be crushed, washed and even burned without losing its shape. It was ideal for the pragmatic, peripatetic Bacall when she traveled to London to see her good friend Henry Moore (she owned a number of his works) and to Paris to meet with Jean Schlumberger about a bauble or to catch the occasional couture show. “Today’s well-dressed woman can dress in a paper bag if it’s made of Cardine,” Bacall proudly proclaimed.

“I like to have Emanuel, Yves and Halston, all three, in my pocket wherever I go… just not in the same pocket.”

Of course, even if she admitted that she saw herself as lanky and big-footed, Bacall could look smashing in a Hefty bag. On-screen or off, she could slay such high-testosterone men as Humphrey Bogart or Jason Robards. (She famously endured tumultuous marriages to both, neither of whom were what you’d call a wallflower.) Interestingly, she often integrated a masculine touch into her wardrobe, favoring high-waisted, wide-legged trousers; loose blouses; and pantsuits that, thanks to her tall, sleek beauty, “didn’t come across as butch,” notes Steele. A stunning example from the show is a 1973 Ungaro trouser ensemble, a relaxed incarnation of the sharp pantsuits Bacall first wore in the ’40s. “It could have been just as easy for her to wear clothes reflecting her femininity as an alternative to these hyper-masculine men in her life,” Steele observes. Bacall eschewed embellishments, though her silhouette was far softer than, say, that of Marlene Dietrich or the always-trousered tomboy Katharine Hepburn. “Put a ruffle on me and I’m finished,” Bacall declared. “It’s the worse possible look.”

Even after she soared overnight to world-wide fame following the release of Howard Hawks’s 1944 classic To Have and Have Not, the rather ballsy Bacall warred with Warner Brothers. From the start, she refused to allow anyone to remake her appearance. Her individualism never waned. She scoffed if a stylist or costume designer tried to rule her aesthetic. Nor would she ever become synonymous with one particular style. Her mantra was simple: understated but glamorous. And that, perhaps, is why Bacall wore her clothes so well — and never let them wear her.