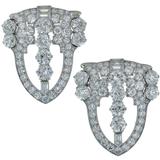 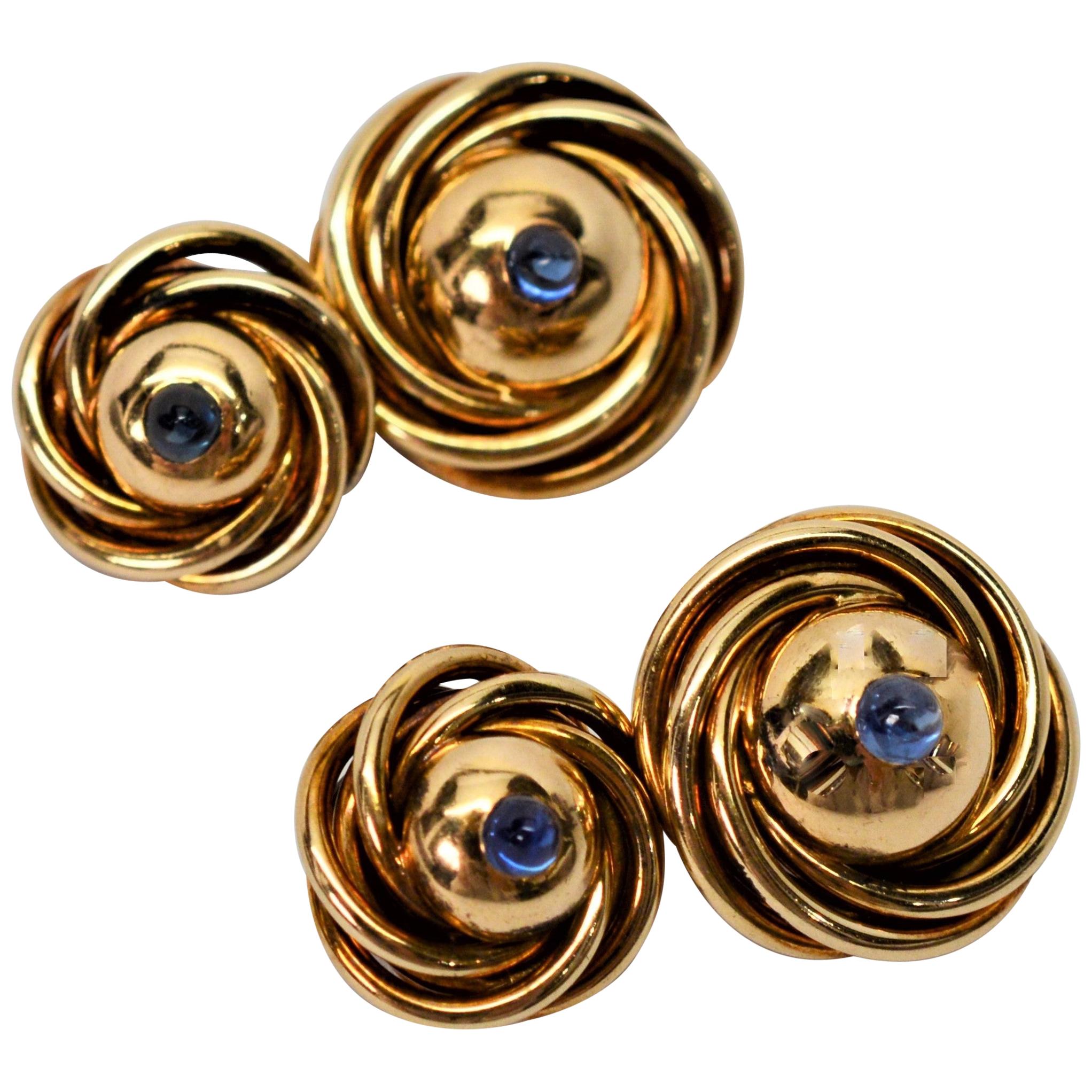 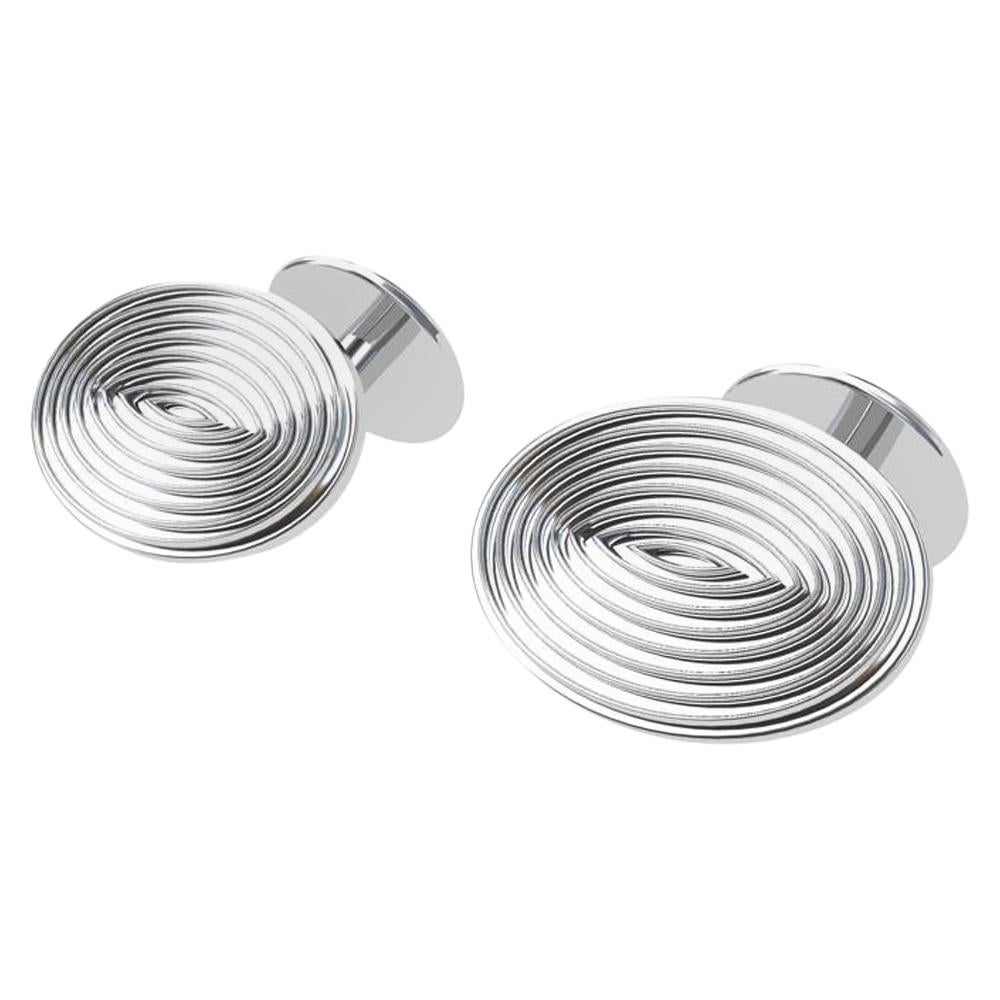 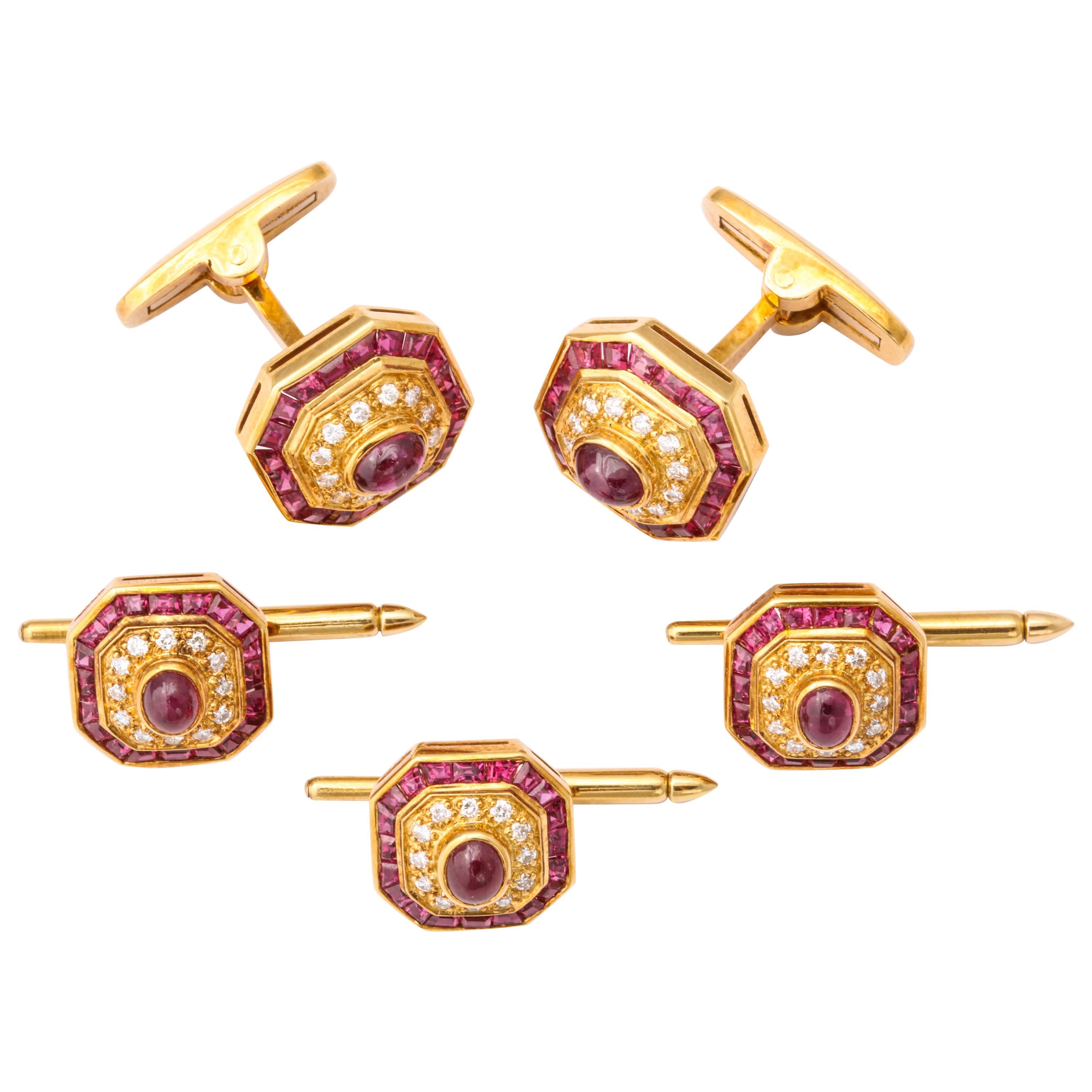 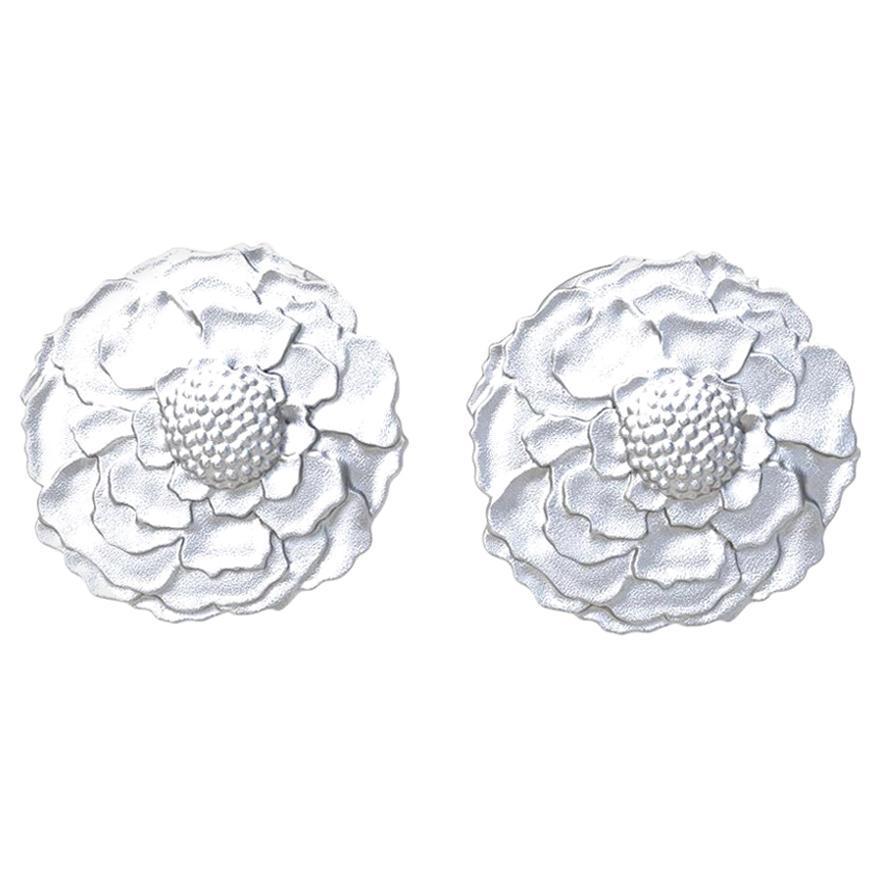 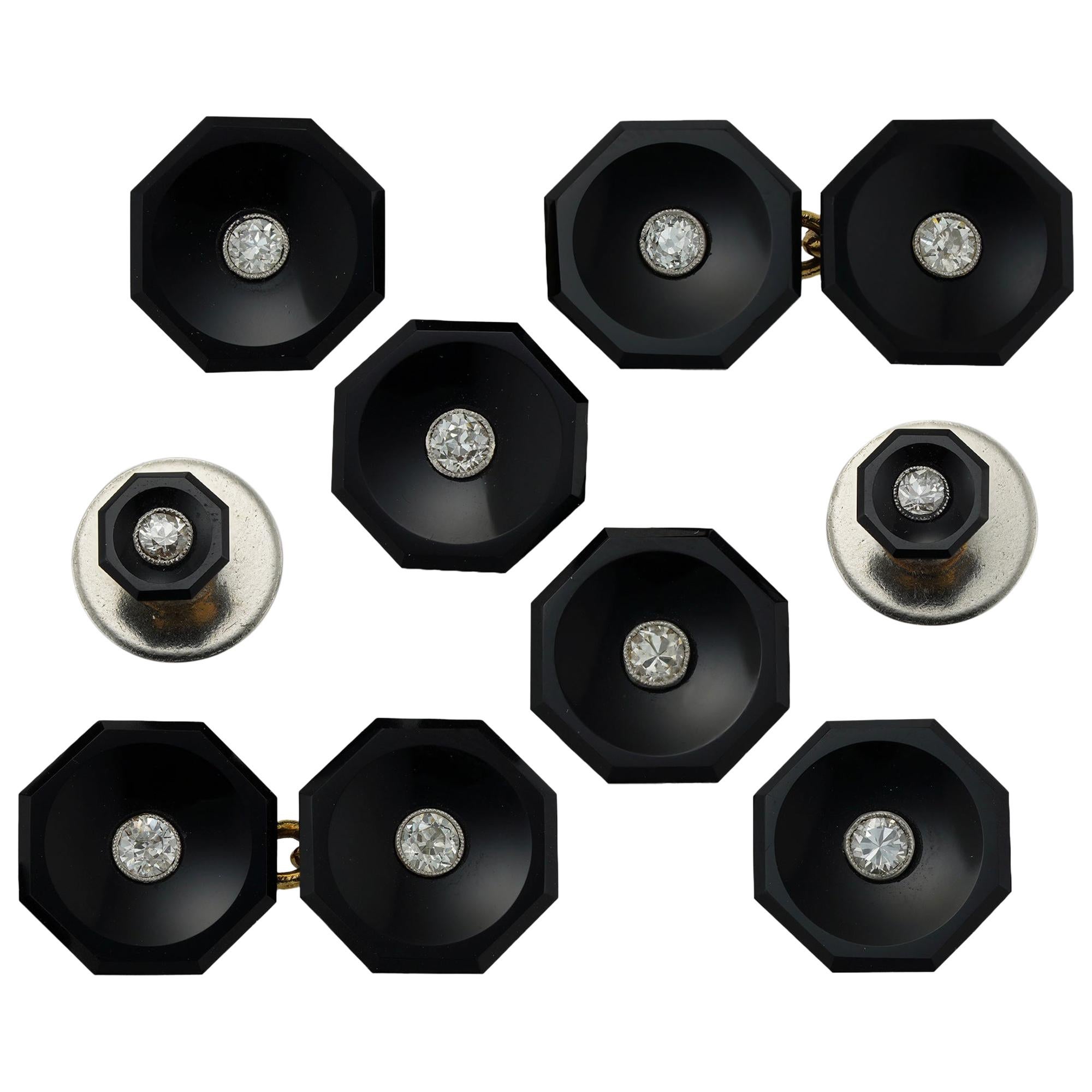 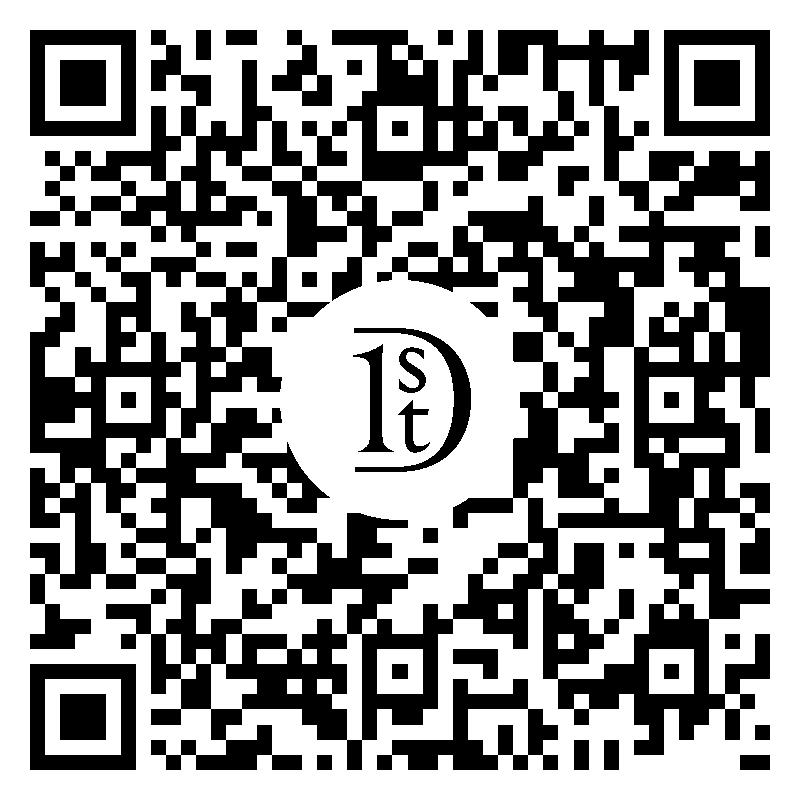 A dress set composed of a pair of cufflinks, four buttons, and three studs, each with a round moonstone set with a cabochon sapphire • 11 cabochon sapphires • In the original Raymond Yard box • Cufflinks diameter: 7/16 inch; buttons diameter: 5/16 inch; studs 3/8 inch The earliest known button, found at Mohenjo-daro in the Indus Valley, was a small round decorative ornament made of shell around 5,000 years old for sartorial flourish. The typical buttonhole was invented in the mid-thirteenth century, as clothing became closer fitting and buttons were used to accentuate the figure. In 1250, buttons were prized as luxury objects and laws and guilds restricted their use. During this medieval period, buttons meant power and luxury. The Italian term for a place powerful leaders meet is still stanza dei bottoni, “room of the buttons.” In the seventeenth century, Louis XIV, famously loved fine jewelry, and had many sets of diamond buttons, including a coat with 123 diamond buttons, diamond-encrusted buttonholes, and diamond sprays extending from the buttonholes. By the Art Deco period, the Industrial Revolution and mass production had made buttons less expensive and easier to obtain and they were common on most articles of clothing for every class. The great French and New York jewelers, however, still fashioned elegant dress sets of luxurious materials for the men who purchased fantastic jewelry for their wives. While buttons and cufflinks provided a limited design surface, the jewelers created pieces with geometric clarity and bold colors to accent male evening attire. Besides a watch and perhaps a ring, a dress set was the only wearable jewelry for a man in the 1920s. With a client base that included America’s wealthiest and most socially prominent families, Yard created tasteful and elegant jewels of the highest quality. Yard’s elegant designs are sought after and cherished today. This dress set is particularly beautiful, composed of rounded moonstone set with a cabochon sapphire, the buttons are meant to glisten in the low light of an evening event and catch the eye. Just as sartorially elegant as when they were created a century ago, this dress set would be a beautiful addition to any collection. 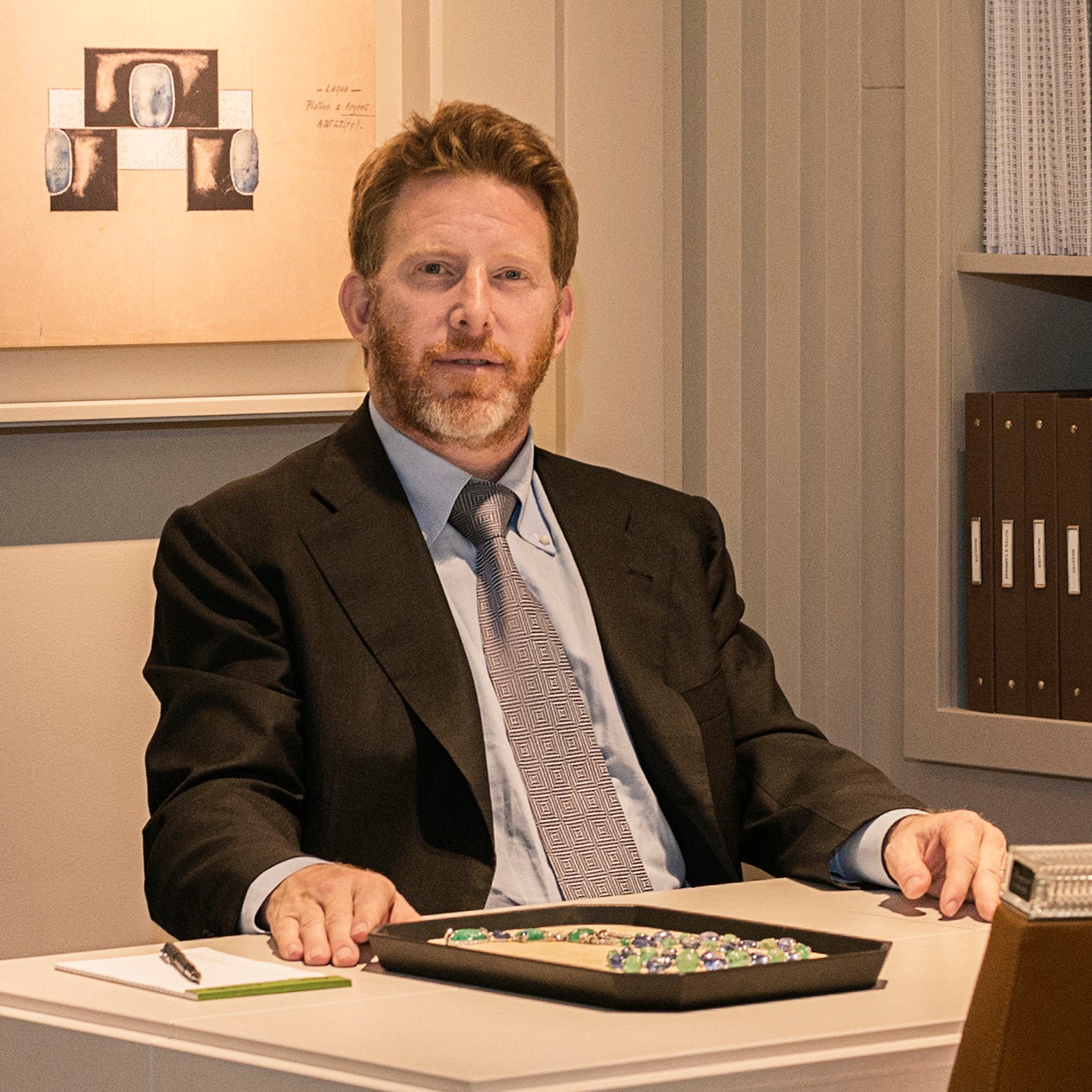 Recognized Seller
These prestigious sellers are industry leaders and represent the highest echelon for item quality and design.
Diamond Seller
These expertly vetted sellers are 1stDibs' most experienced sellers and are rated highest by our customers.
Established in 1920
1stDibs seller since 2020
6 sales on 1stDibs
Typical response time: 6 hours
More From This Seller

$1,450
Free Shipping
Platinum Optical Art Cyclops Cuff links
By Thomas Kurilla
Located in New York, NY
Platinum Cyclops Optical Art Cuff links. These are inspired from Optical Art works from the 1960's. It is a form of abstract art and is closely connected to Kinetic and Constructivis...
Category

$2,750 / item
Free Shipping
Ruby and Diamond Cuff-Links
Located in New York, NY
A cuff-links set adorned by diamonds set in yellow gold with pave diamond and rubies Made circa 1970
Category