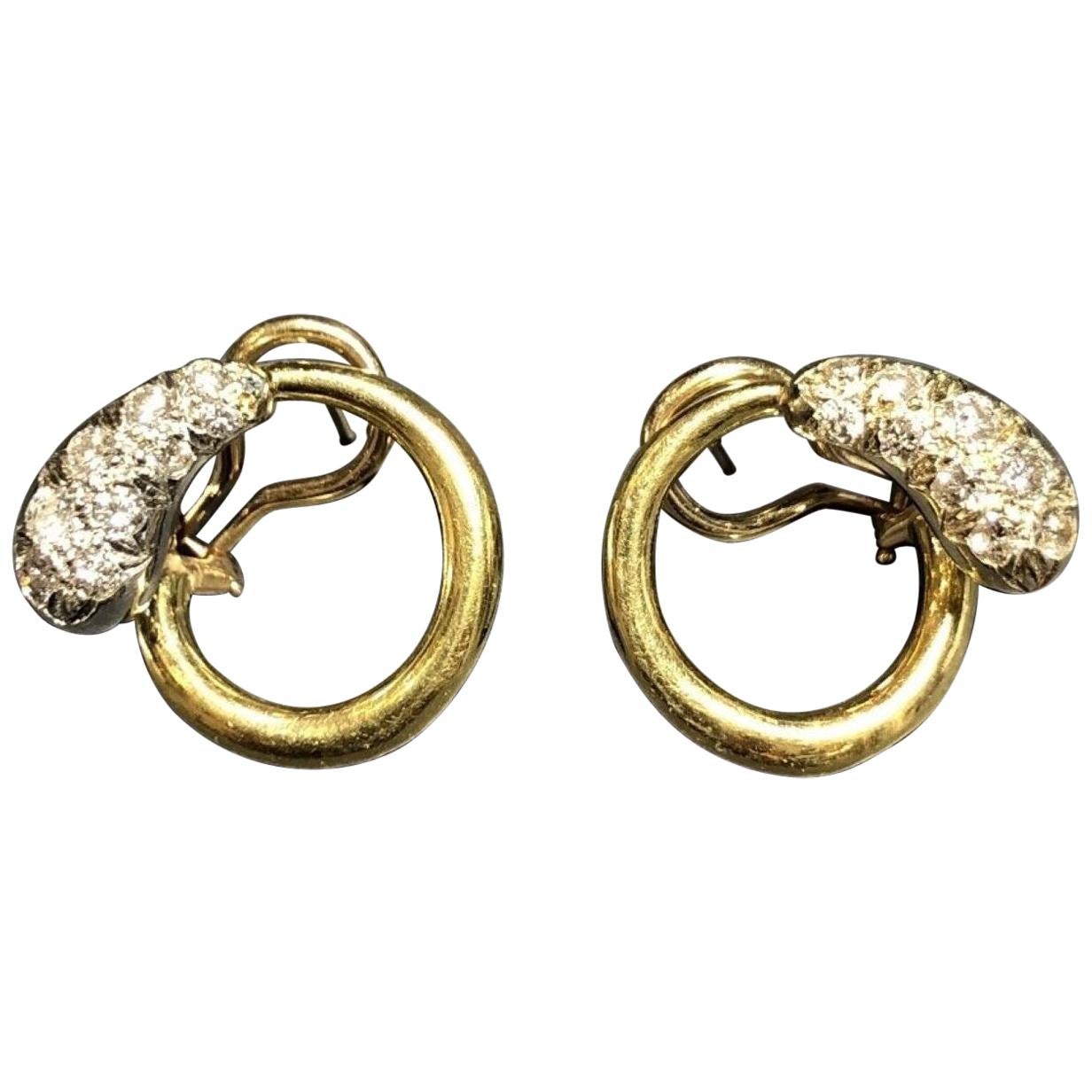 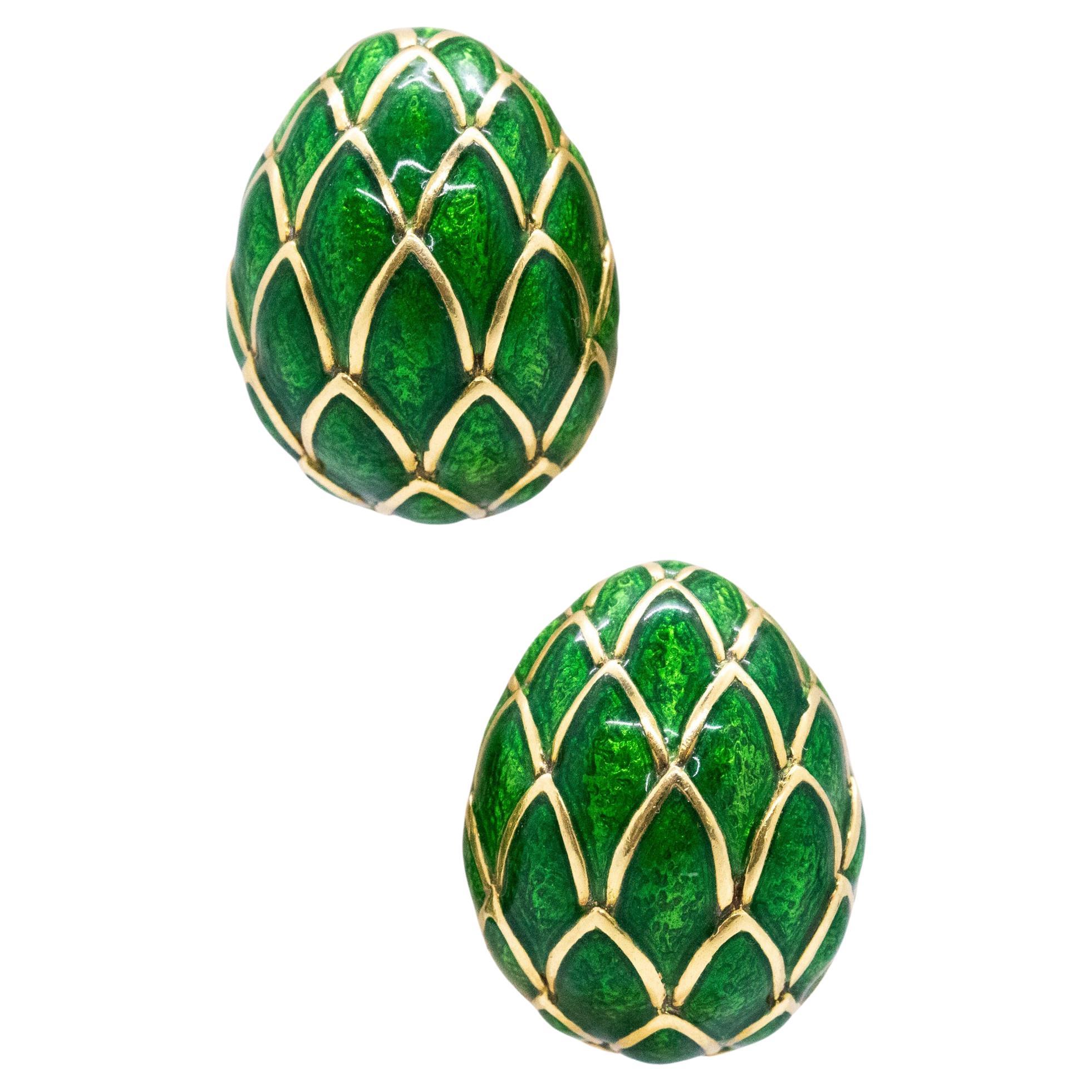 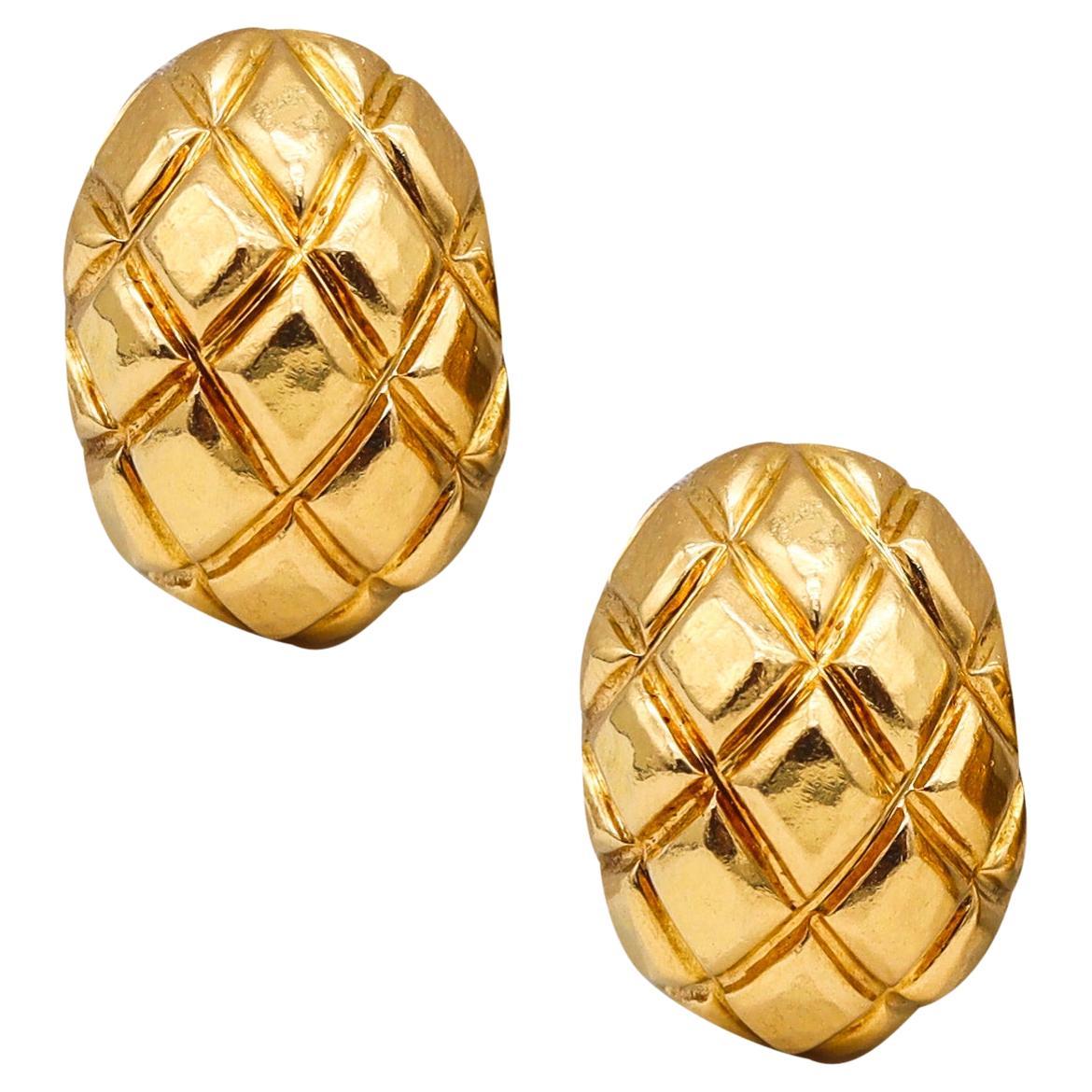 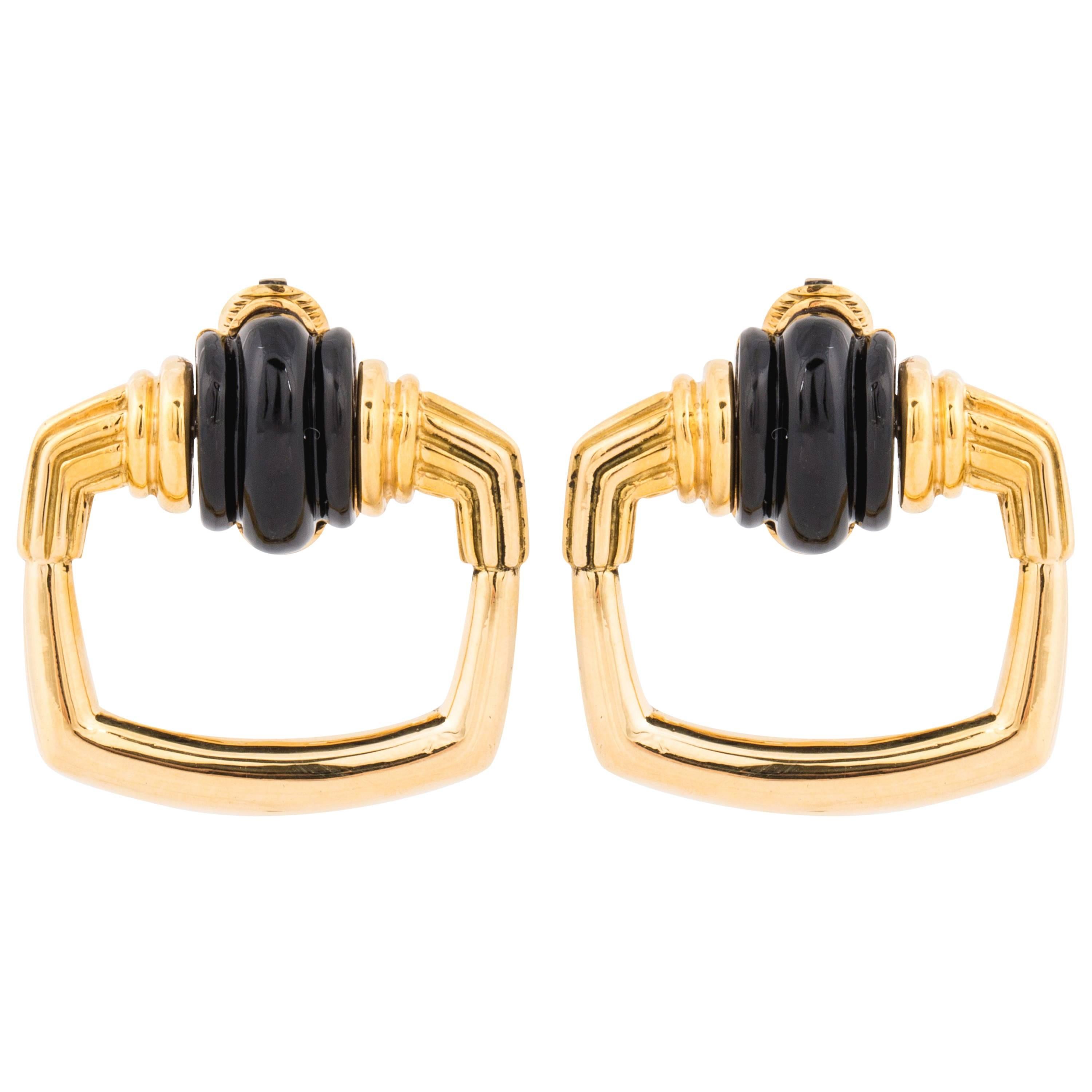 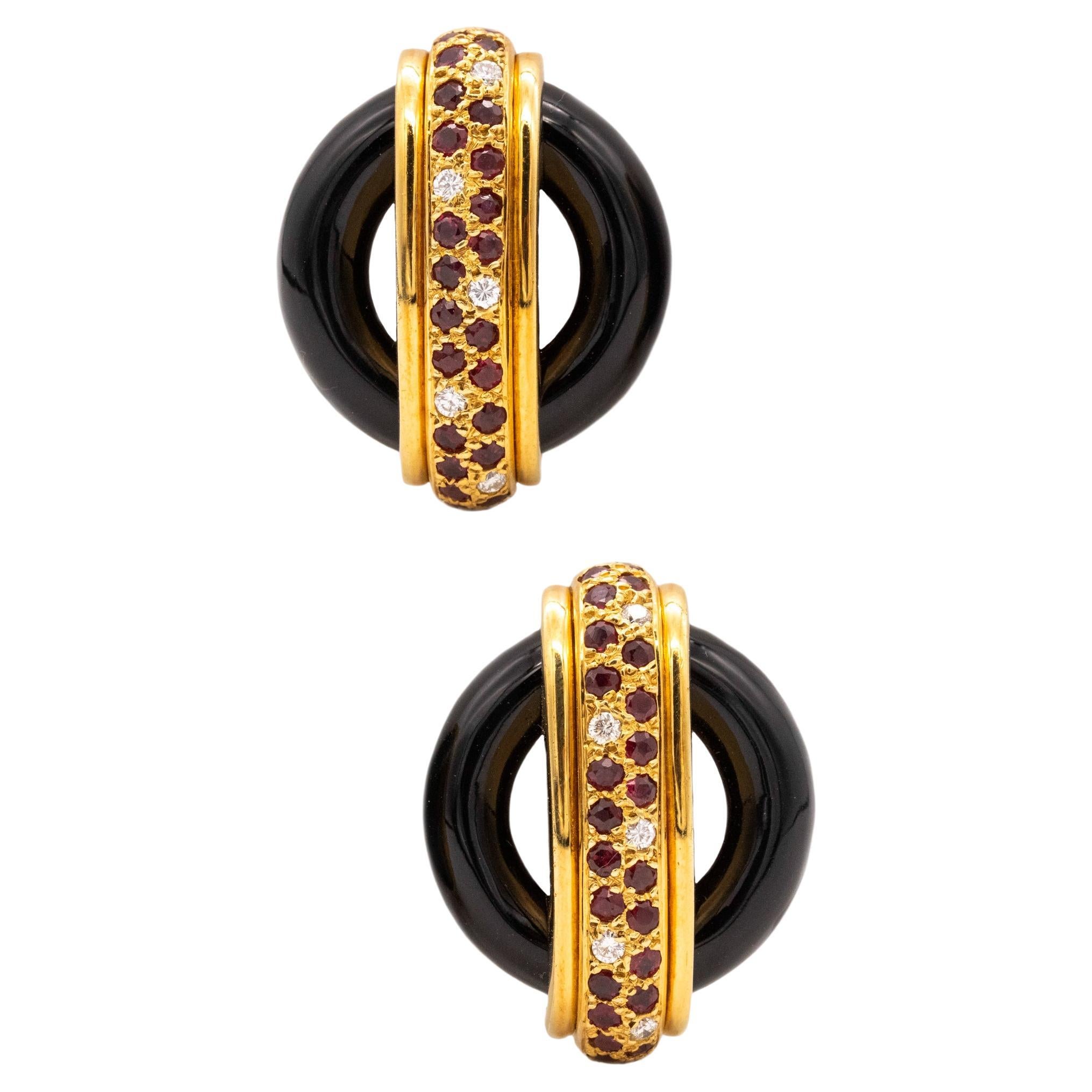 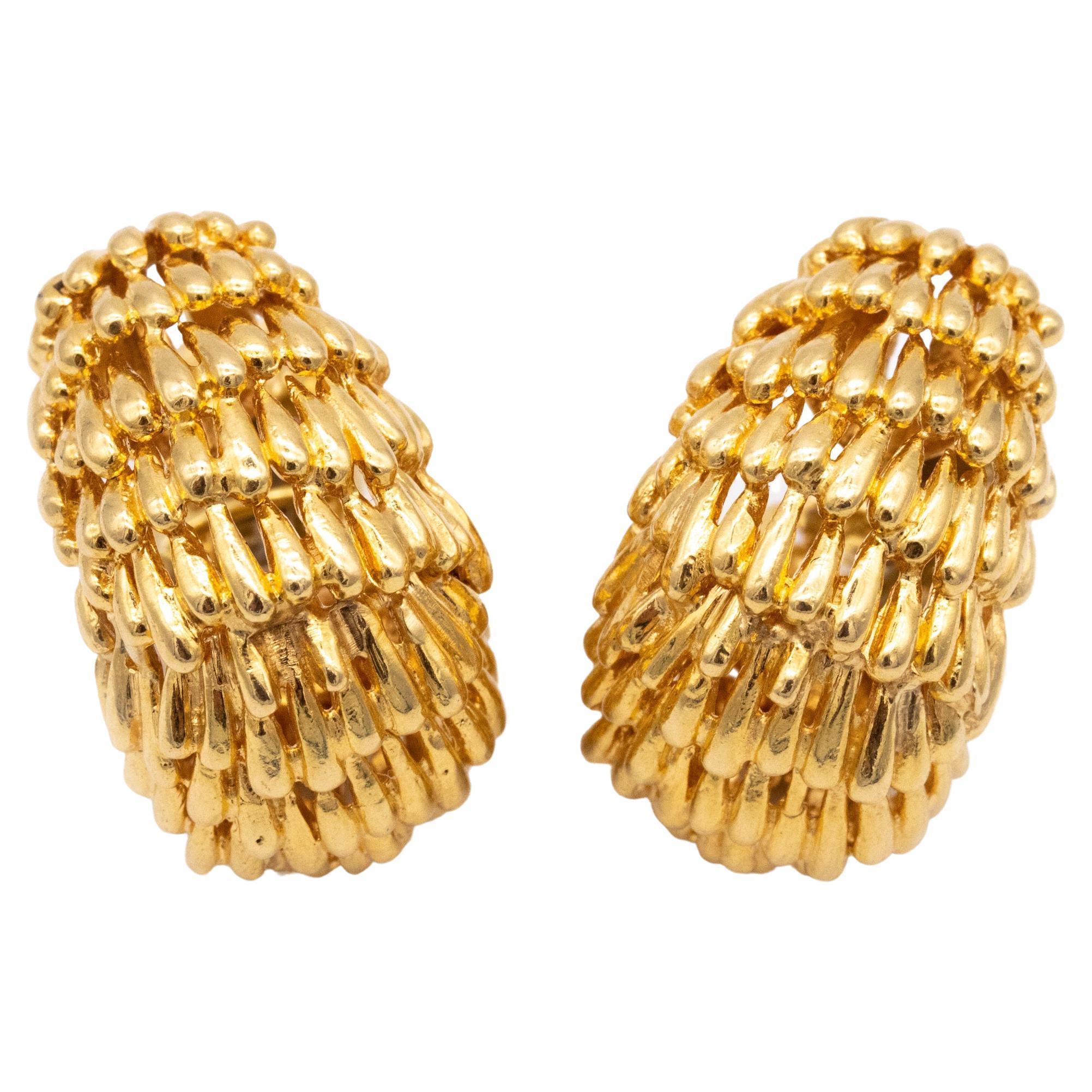 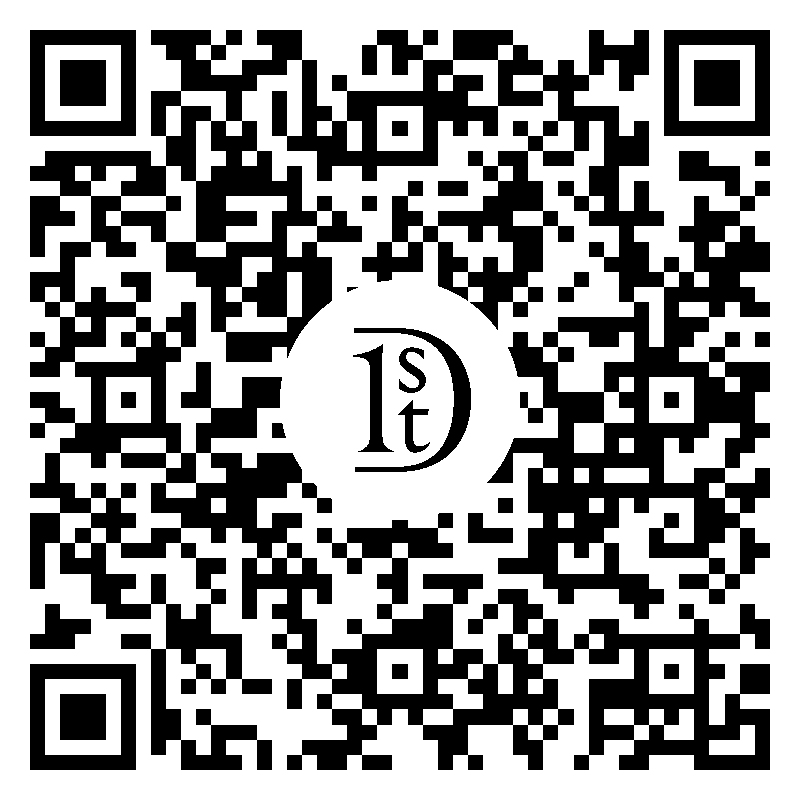 A pair of Earrings designed by Aldo Cipullo (1942-1984). Great quilted pair, created in New York city at the atelier of Aldo Cipullo, back in the 1970's. This pair of clips-earrings has been crafted in solid yellow gold of 18 karats, with high polished surfaces. Suited with omega backs for fastening clips and the posts option for pierced ears can be easily added. Mount, with 8 round brilliant cut diamonds, 0.12 carats, F color, VS-2 Clarity. They have a combined weight of 16.2 Grams and a measurements of 20 mm by 20 mm. Stamped, with the maker's mark, the gold assay hallmark and signed, "A. CIPULLO 18KT". Aldo Cipullo (1942-1984), was an Italian born jeweler. He born and was raise in a family of designers with jewelry traditions, his father was the owner of a jewelry factory and his brother Renato Cipullo made jewelry designs for Christian Dior. Aldo, was the creator of the popular and iconic Cartier bracelets, love and the nail, still until today considered ones of the best designs of the 20th century. He work as a designer in New York, for David Webb (1960-1969) and Cartier (1969-1975). In 1975 he found his own company as a freelance designer. They are in excellent condition. INVENTORY REF: E0000AEMM/.3894 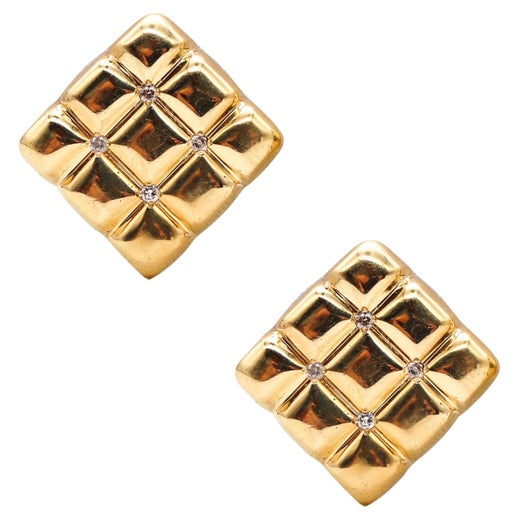 In a jewelry-design career spanning just over two decades, Aldo Cipullo created a portfolio of iconic pieces. And decades after his death, his most famous, the Cartier Love bracelet, remains a best seller.

A life devoted to jewelry seemed preordained for Cipullo, who was born in Naples in 1935 and raised in Rome. His father, Giuseppe, manufactured costume jewelry, and Cipullo, the eldest of five siblings, began selling goods for the family business at age 15.

In 1959, Cipullo left postwar Italy for New York City. He had found the right place at the right time to ply his prodigious talent and navigated between some of the most prestigious jewelers situated on the city’s most glittering thoroughfares, 57th Street and Fifth Avenue. Cipullo’s first stop was the workshop of David Webb, a favorite among the mid-century beau monde. Webb, who was one of America’s most influential and best-loved jewelry designers, became a mentor for the new arrival, advising him to call himself a designer despite his bench jeweler job description.

Tiffany & Co. came next. Cipullo alighted at the design studio in 1964, becoming — along with Sonia Younis, Don Berg and Donald Claflin — part of a youthquake that brought fresh ideas to the stately American brand.

At Tiffany, Cipullo came into his own as a designer with an original point of view, developing a facility across a broad swathe of motifs and inspirations that included lifelike florals, stylized African animals and masks, modern geometries — and hardware, expressed in a series of key-shaped brooches that offer the first glimpse of a theme he would return to later. By the end of the 1960s, he was designing some of Tiffany’s crown jewels, pieces in its Blue Book high-jewelry collection, often using lapis, coral or turquoise. These colorful opaque gems were among the materials that would become hallmarks of his work.

According to the designer’s brother Renato Cipullo — a coauthor with jewelry journalist Vivienne Becker on Cipullo: Making Jewelry Modern (Assouline) — when the term of a two-year contract with Tiffany neared its end in 1969, the brand passed on a gold bracelet design Aldo presented to the house. Though Tiffany wasn’t ready to raise Cipullo’s profile, another suitor would soon pick up the piece and give it, and in turn Cipullo, a major public platform. He struck a deal with Michael Thomas, president of Cartier New York, to carry some of his designs — including the new bracelet — exclusively.

Becker recounts the history of the Cartier Love bracelet in the book: Cipullo frequently said that the Love bracelet was born of a sleepless night contemplating a love affair gone wrong and his realization that “the only remnants he possessed of the romance were memories.” He distilled the urge to keep a loved one close into a slim 18-karat gold bangle. The Love bracelet combined hardware with elements of symbolic Victorian jewelry and the chastity belt, plus the ritual of meaningful adornment.

The bracelet, along with its designer, was just the tonic that Cartier needed at the start of the 1970s, a moment when the venerable brand was seeking an injection of youthful jet-set glamour. Cipullo’s winning streak with the brand continued, even as he designed for his own studio, Aldo Cipullo Ltd., which he established in the early part of the decade.

The Love design — which also yielded a ring and a necklace — was not Cipullo’s sole hardware-inspired jewelry for Cartier; his unisex Juste un Clou (“just a nail”) bracelet takes the form of a curved nail. When he died, at the age of 48, from a double heart attack, Cipullo was only getting started. Nevertheless, he left a profound legacy.

About the Seller
New to 1stDibs
Joined in the past six months.
No Reviews Yet
Located in Miami, FL
Vetted Seller
These experienced sellers undergo a comprehensive evaluation by our team of in-house experts.
Established in 1995
1stDibs seller since 2022
14 sales on 1stDibs
Typical response time: 14 hours
More From This Seller

$8,500
18kt Yellow Gold with Amethyst Earrings
Located in GALLARATE, IT
Fashion earrings for any occasion. The design is very accurate and unique. Our mission is to combine colorful stones and unique shape and design. Earrings in yellow gold 18 Karat wit...
Category