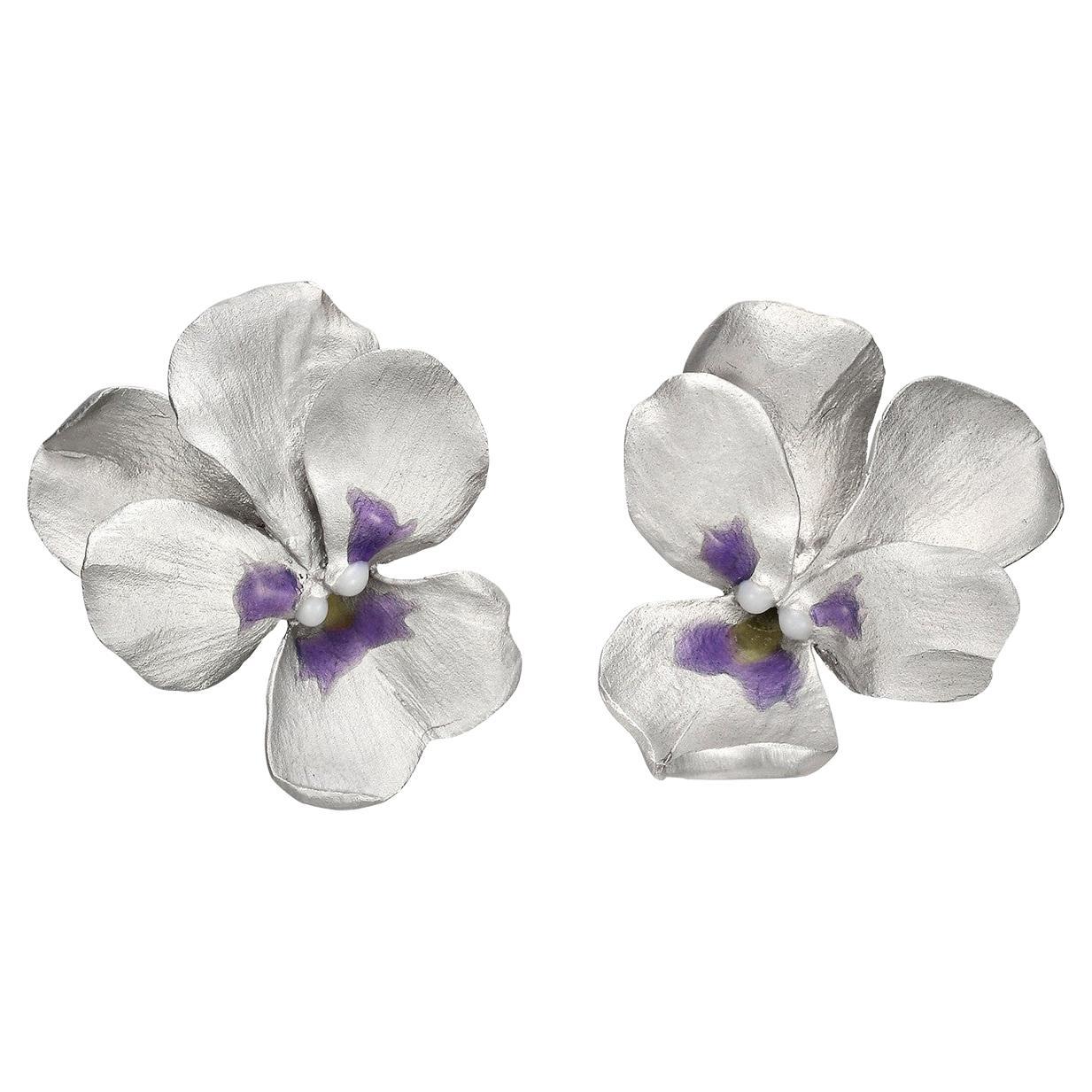 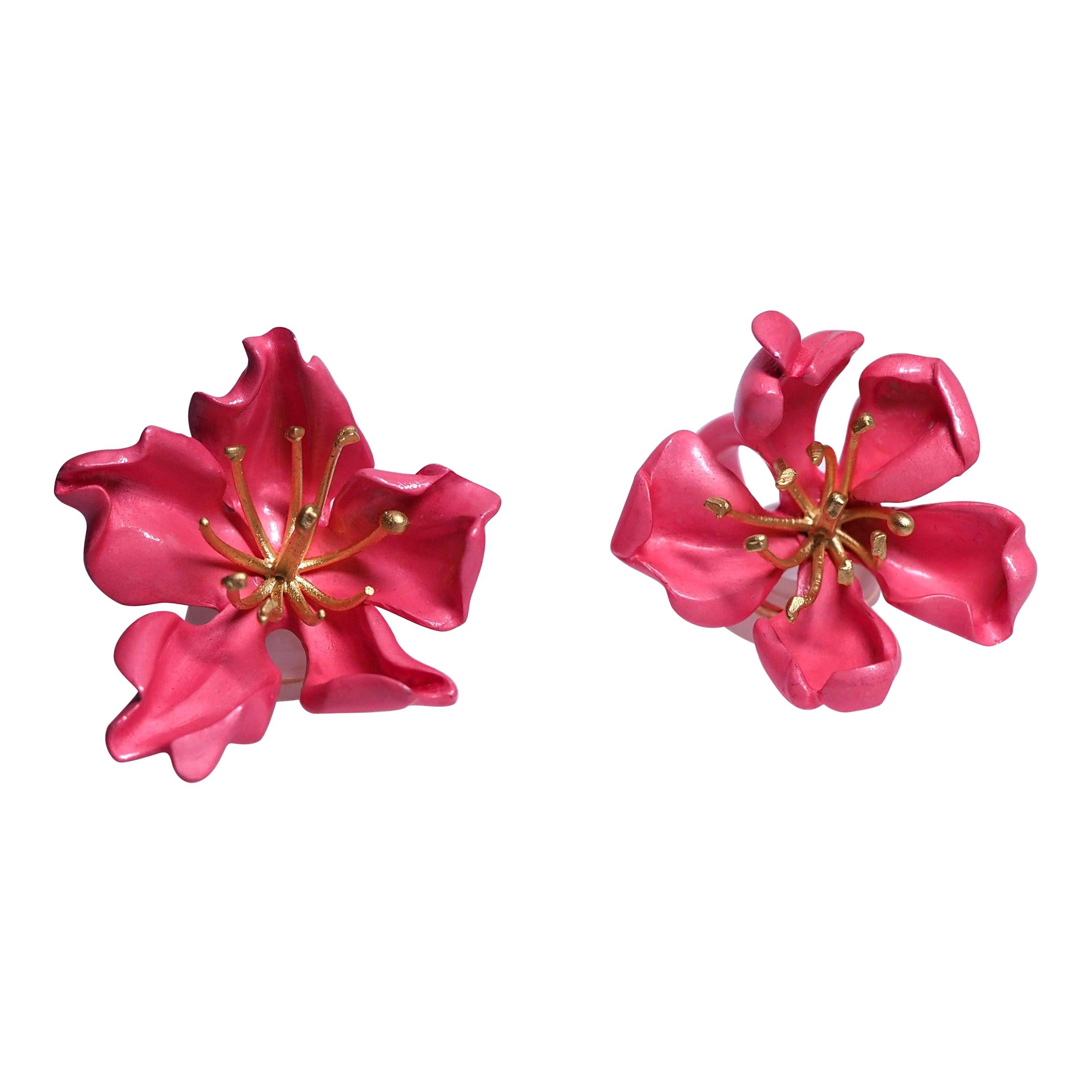 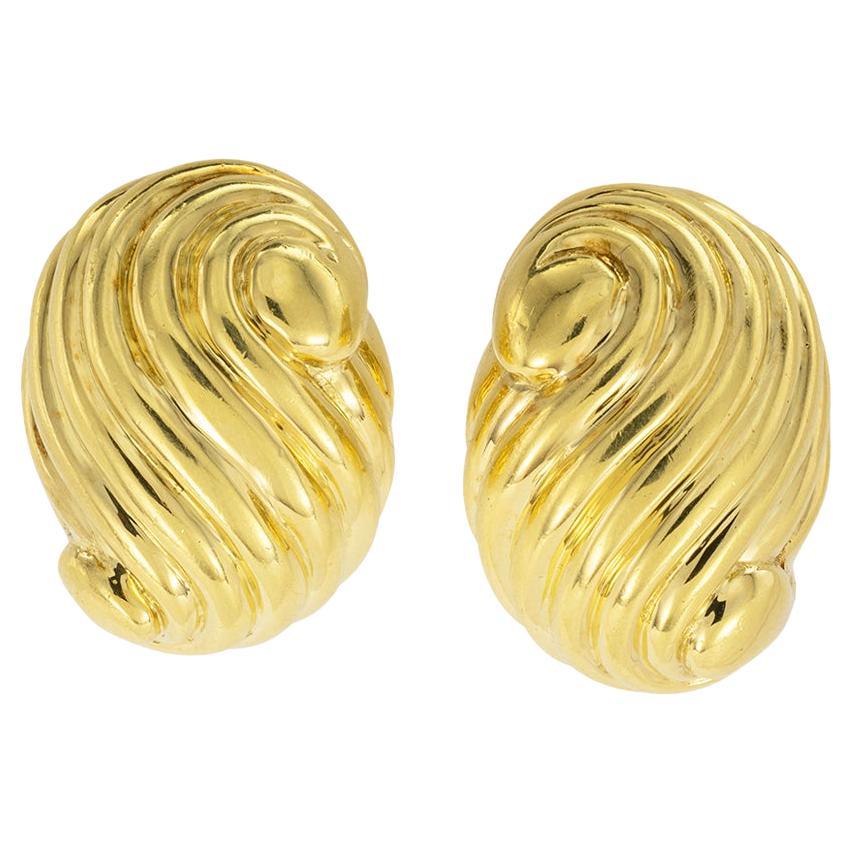 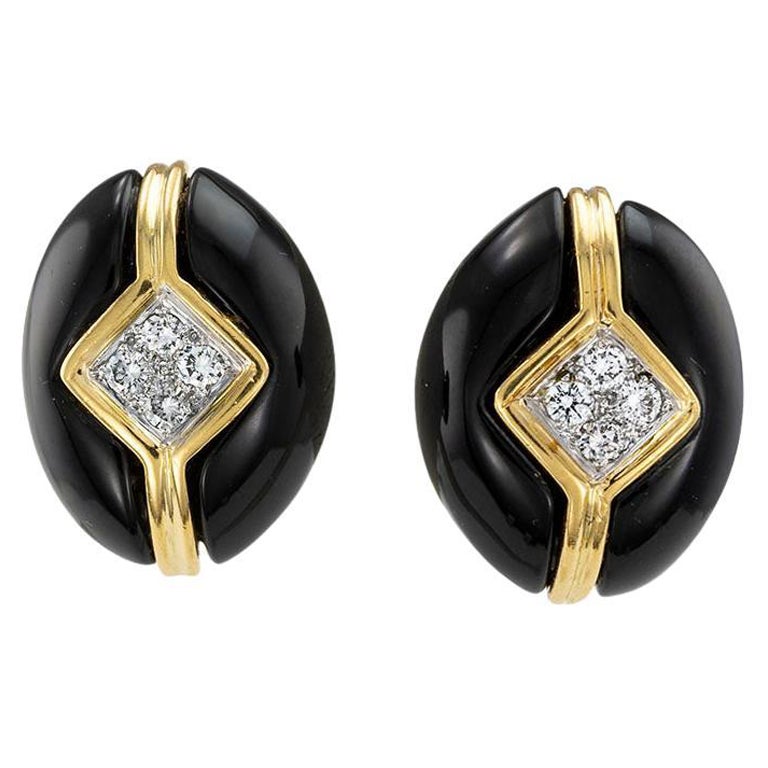 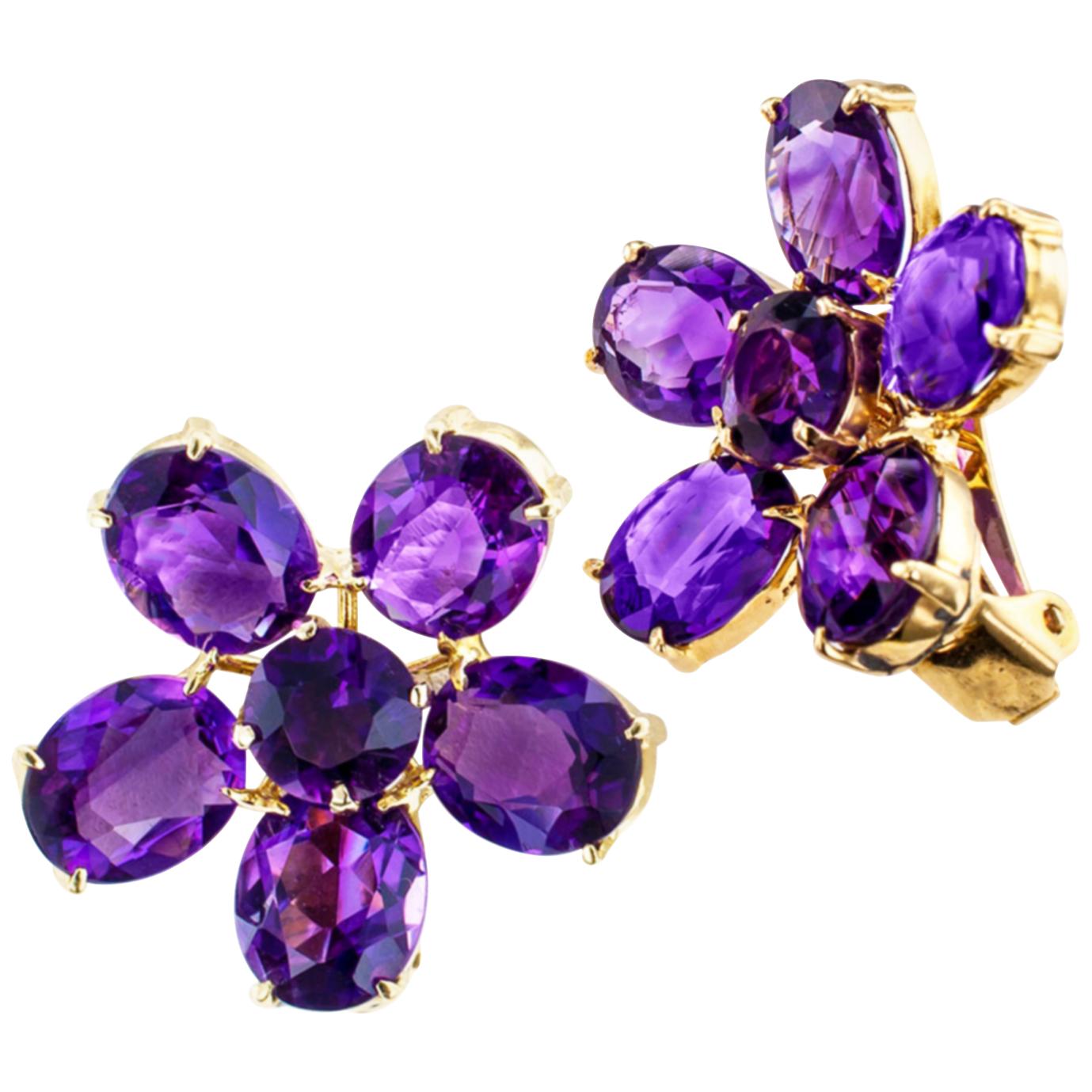 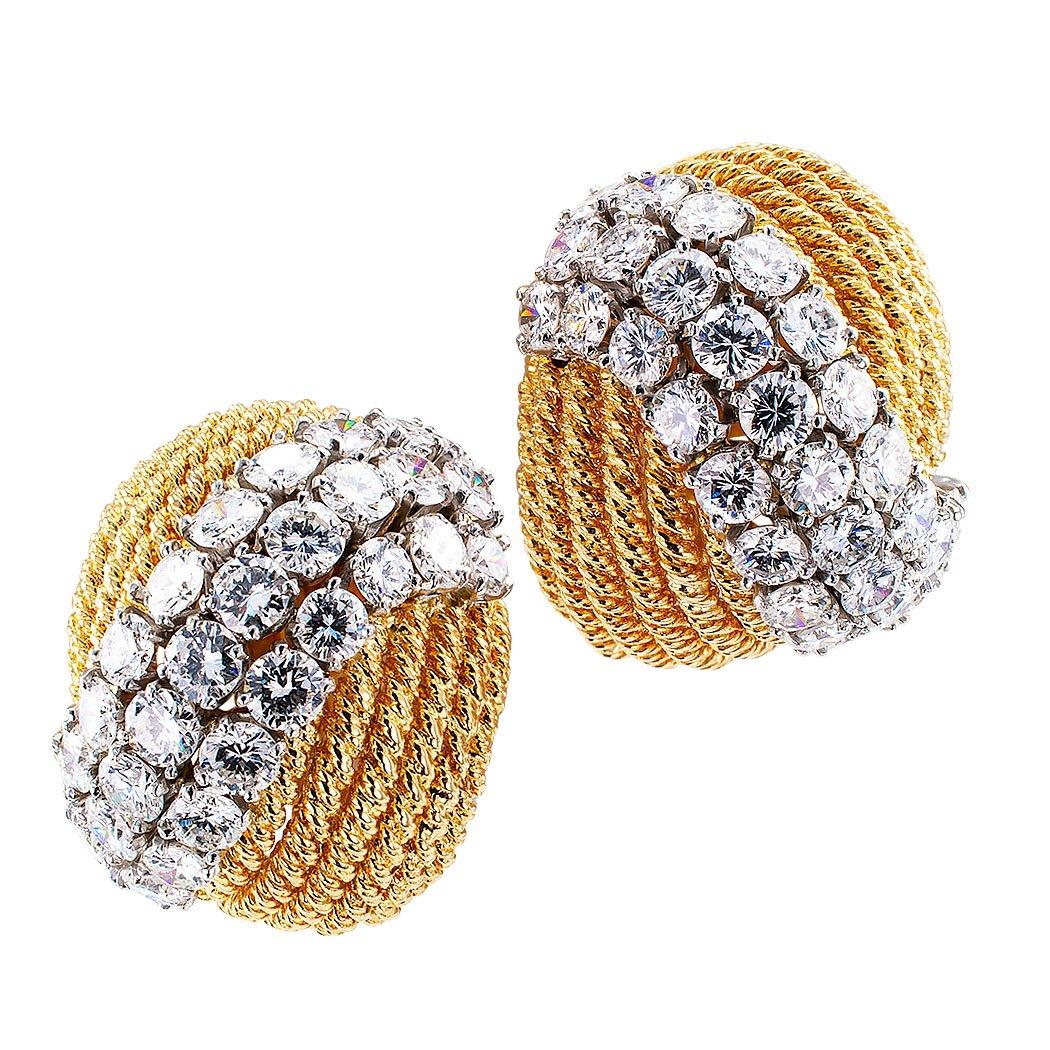 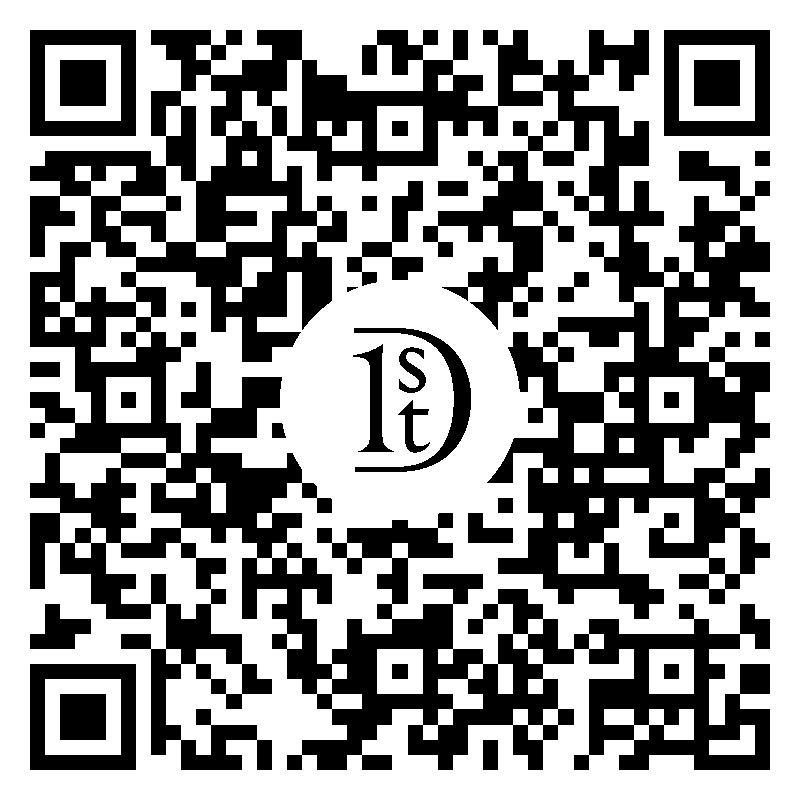 Jar Valerie Black Aluminium Earrings Wearable sculpture made and signed by JAR (Joel Arthur Rosenthal) in his Place Vendome studio, which is by appointment only. These “Valerie” earrings are rare and collectible. Excellent condition with its original suede pouch. May be positioned several ways both in front of and crossing front and back of the lobe. Dramatic and Chic. 1-3/4 X 1-5/8 inches in size. 18k gold. Signed JAR Paris, numbered. About JAR Joel Arthur Rosenthal was born in New York City. He graduated in art history from Harvard in 1966 before moving to Paris. He initially worked in the film industry, and then opened a needlepoint shop, where his clients included Hermès and Valentino, and where his work with multi-colored yarns would have a lasting effect on his designs. After working with Bulgari in New York, he returned to Paris and opened a shop in the Place Vendôme in 1977; his initials, JAR, the only source of identification on the façade. Mr. Rosenthal works with his partner, Pierre Jeannet, to create exquisite jewels, superbly crafted in unique settings. His work is meticulous and imaginative, incorporating stones in unexpected color combinations. Only 70 to 80 jewels are created each year, for an exclusive clientele. In November 1987, in celebration of his 10th anniversary in Paris, Mr. Rosenthal held an exhibition of his work at the National Academy of Design in New York City. In November 2002, a retrospective of 400 jewels was held at the Gilbert Collection, Somerset House, in London.

$11,675
David Webb Yellow Gold Clip on Earrings
By David Webb
Located in Los Angeles, CA
David Webb yellow gold clip-on earrings circa 1970. We are here to connect you with beautiful and affordable antique and estate jewelry. SPECIFICATIONS: Contact us right away if...
Category

$5,900 / set
Onyx Diamond Yellow Gold Clip-On Earrings
Located in Los Angeles, CA
Black onyx diamond and yellow gold clip-on earrings circa 1980. Contact us right away if you have additional questions. We are here to connect you with beautiful and affordable a...
Category

$1,410 Sale Price
30% Off
Blue Sapphire Yellow Gold Clamshell Clip-on Earrings
Located in Los Angeles, CA
Estate blue sapphire and yellow gold clamshell clip-on earrings circa 1960. Contact us right away if you have additional questions. We are here to connect you with beautiful and ...
Category

$1,250 / set
Diamond Yellow Gold Ribbon Bow Clip On Earrings
Located in Los Angeles, CA
Diamond and yellow gold ribbon bow clip-on earrings 1990s. Contact us right away if you have additional questions. We are here to connect you with beautiful and affordable antiqu...
Category