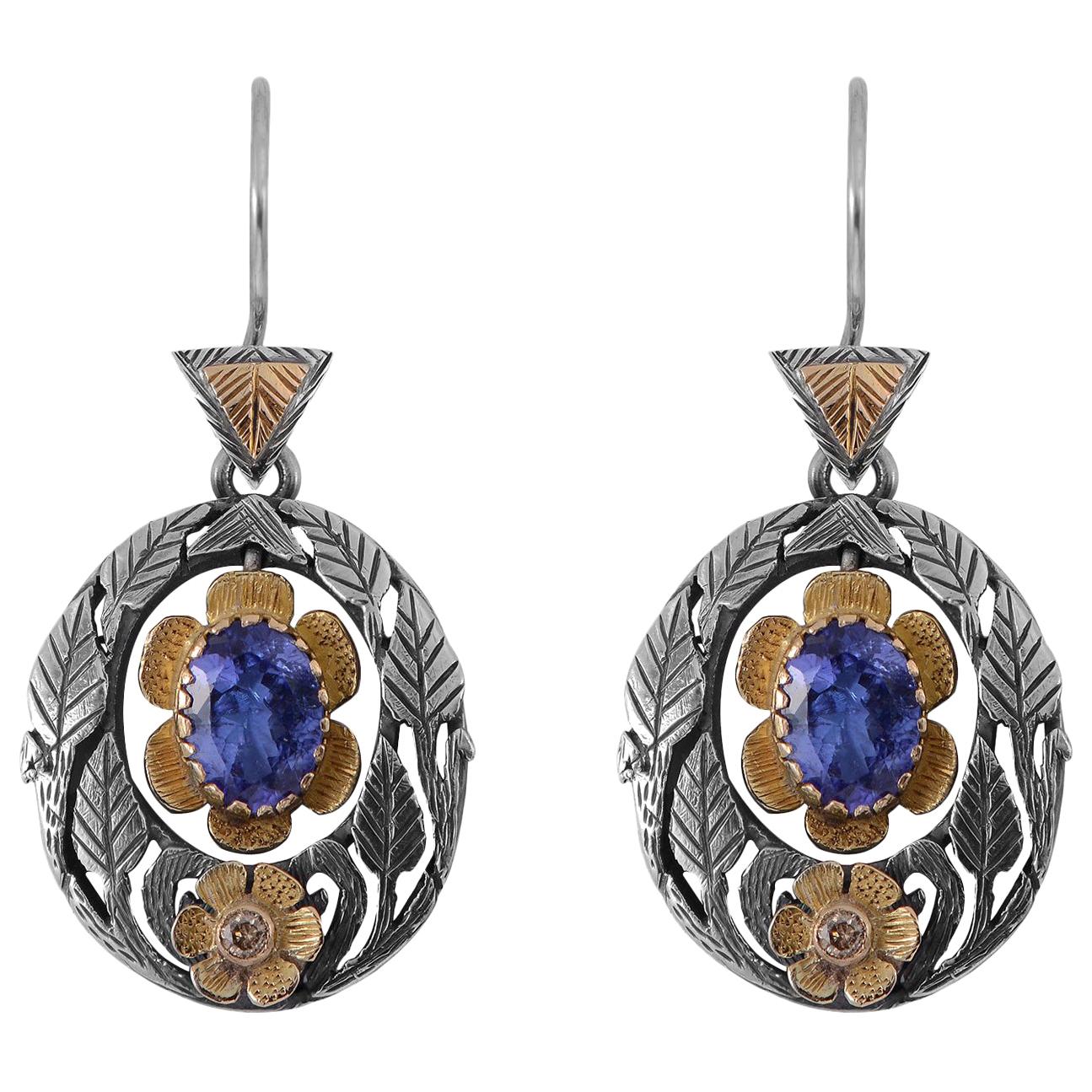 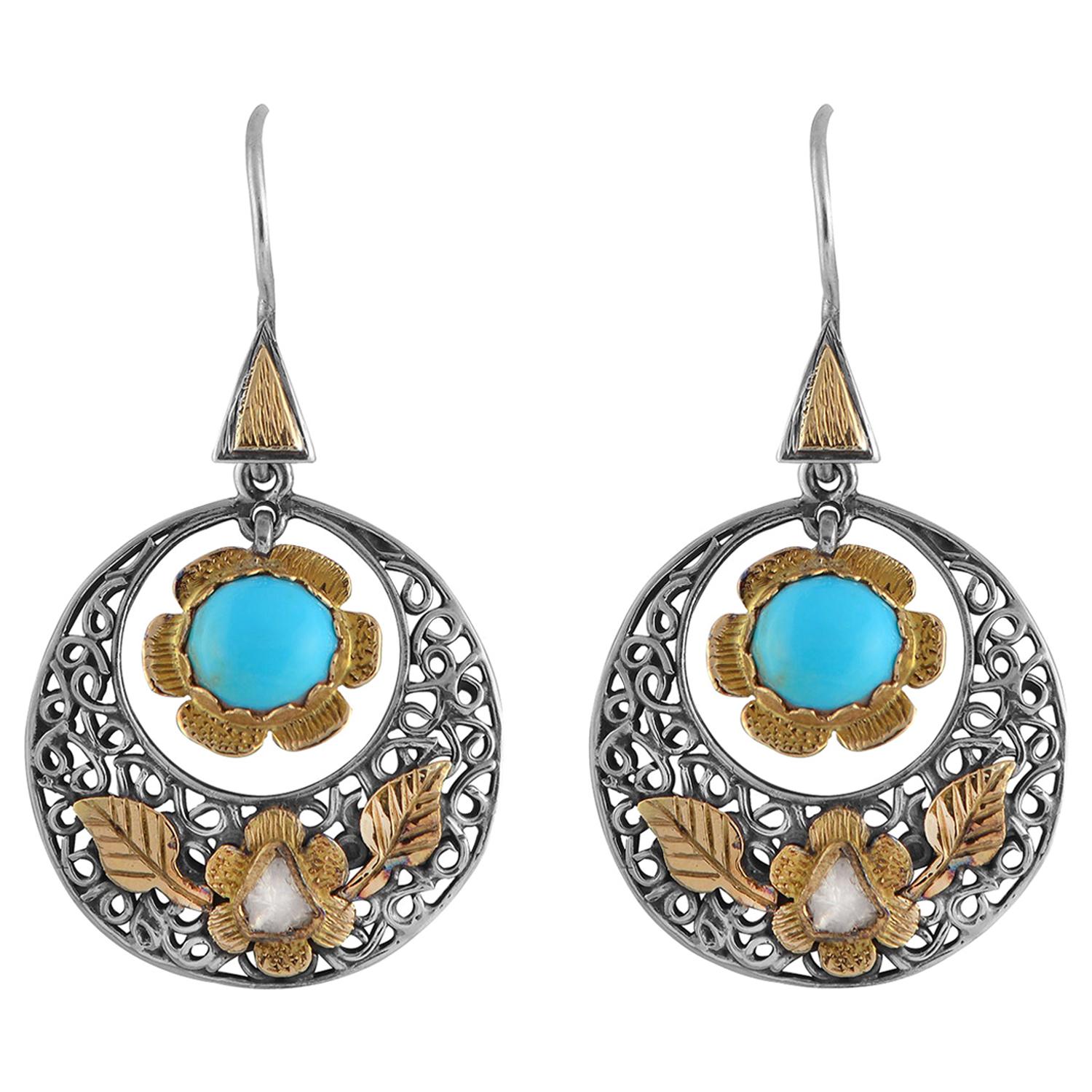 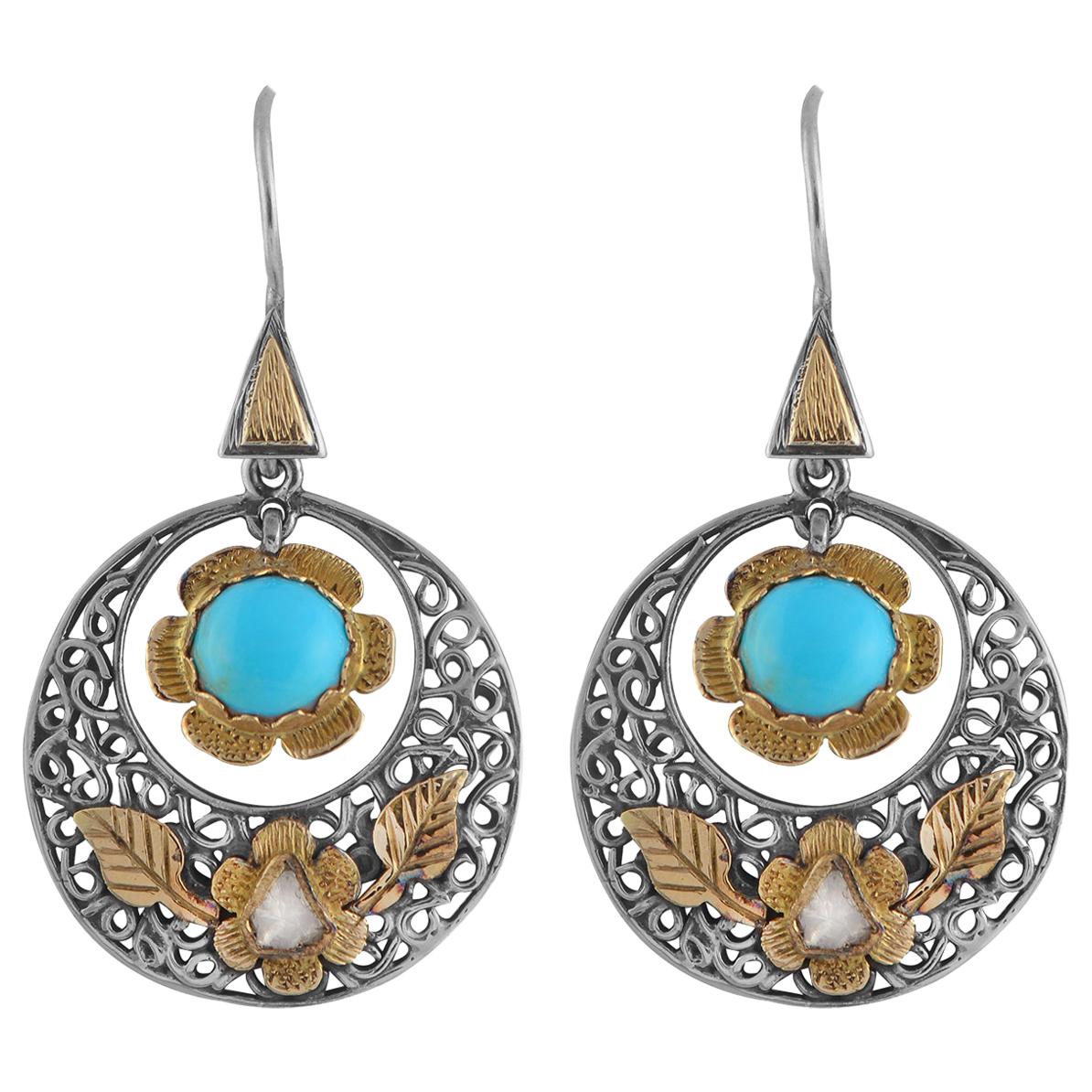 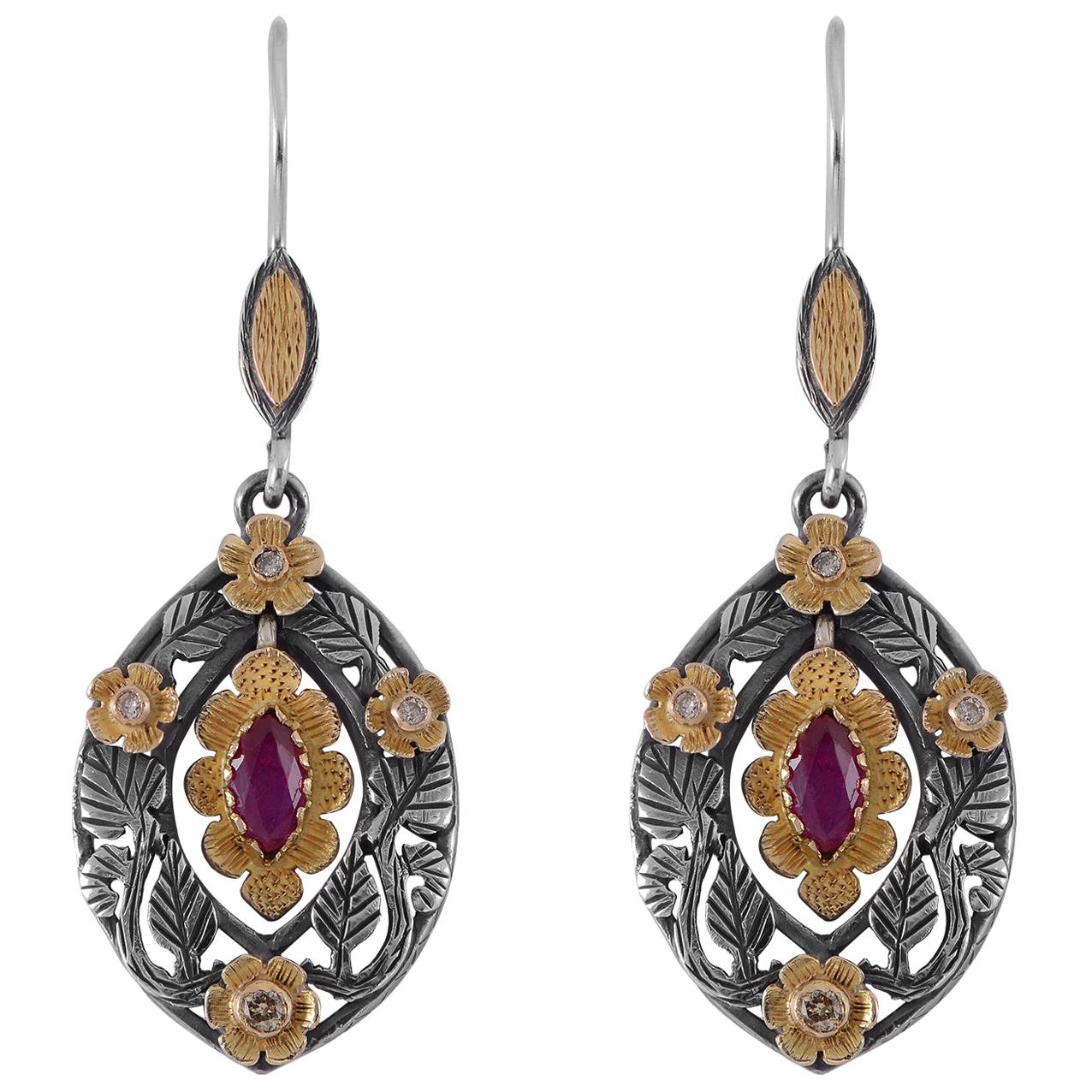 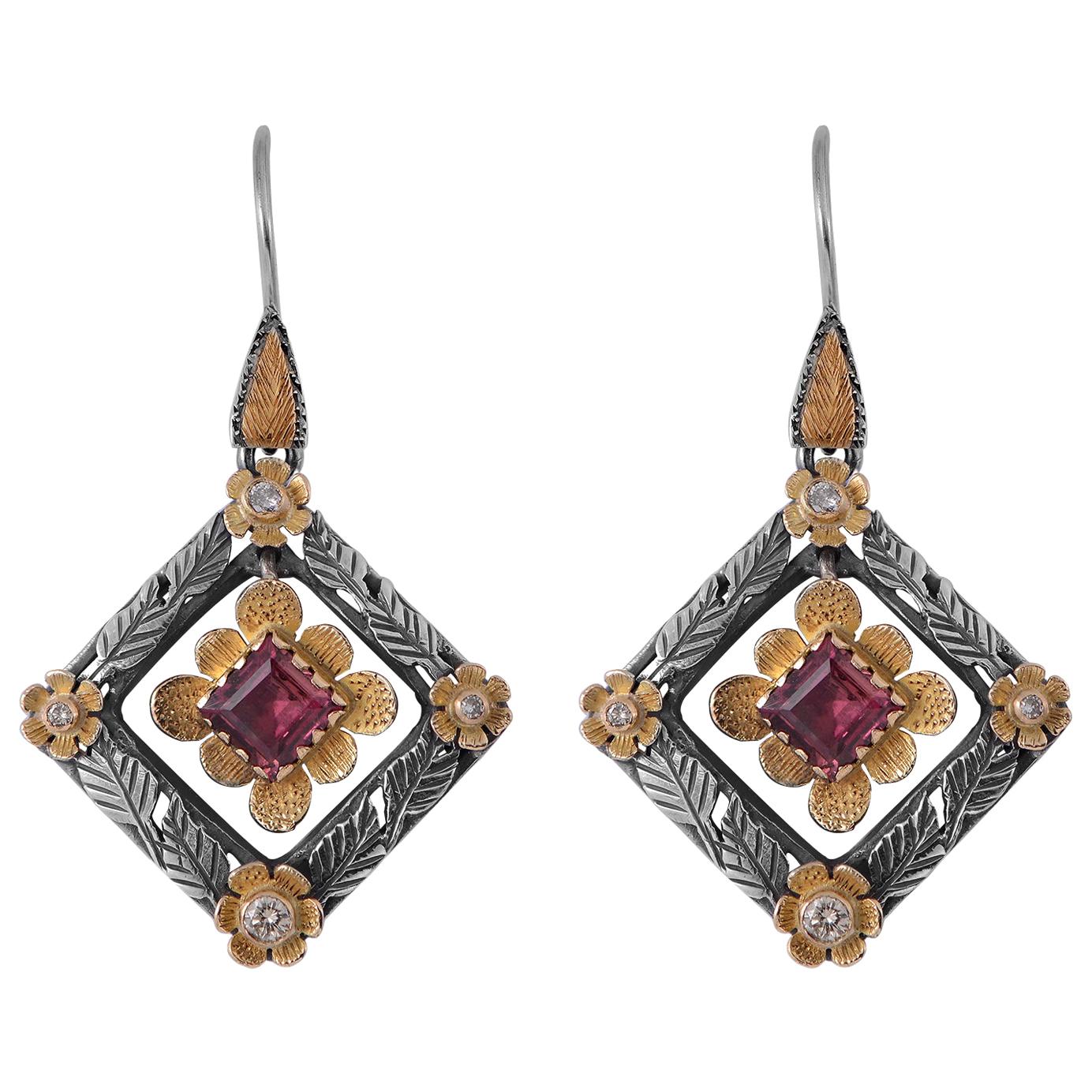 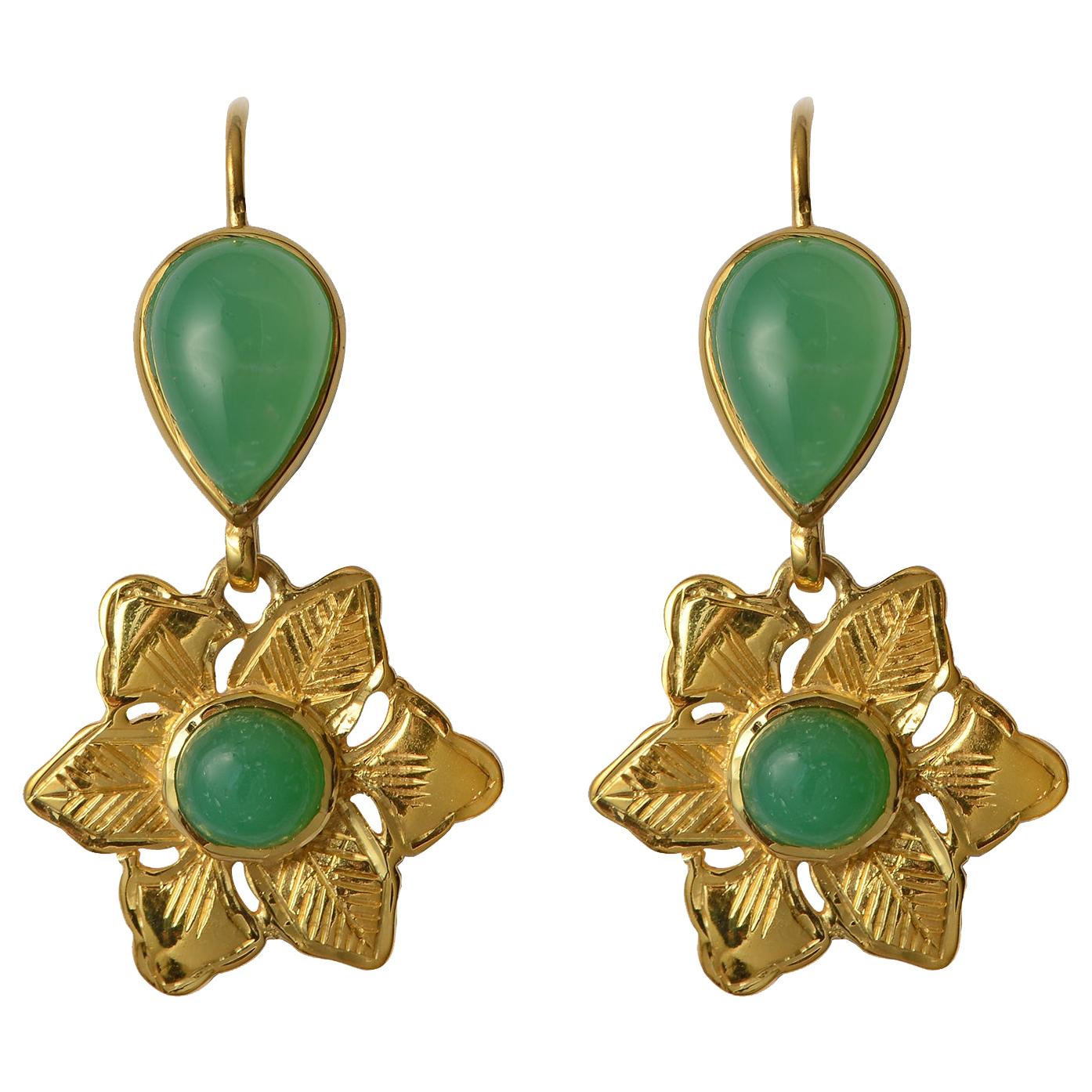 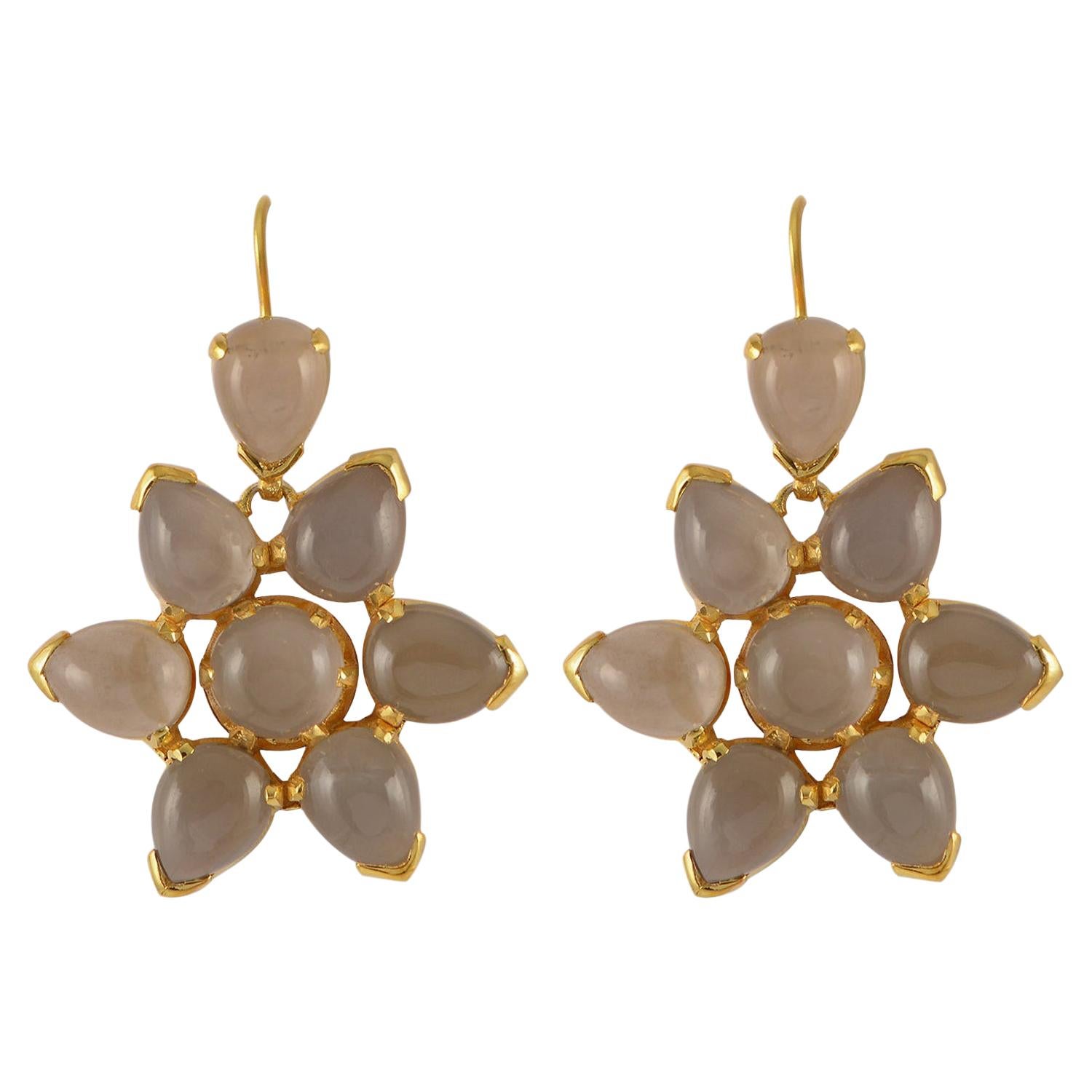 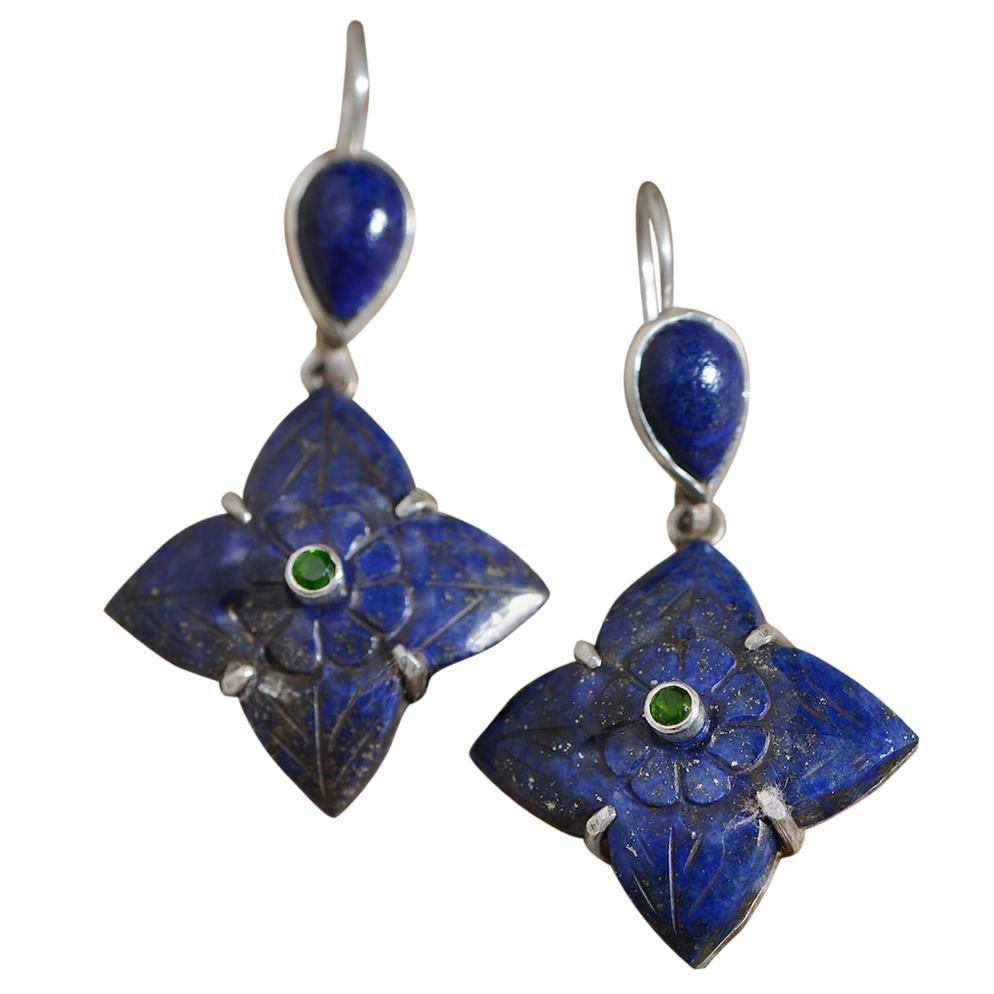 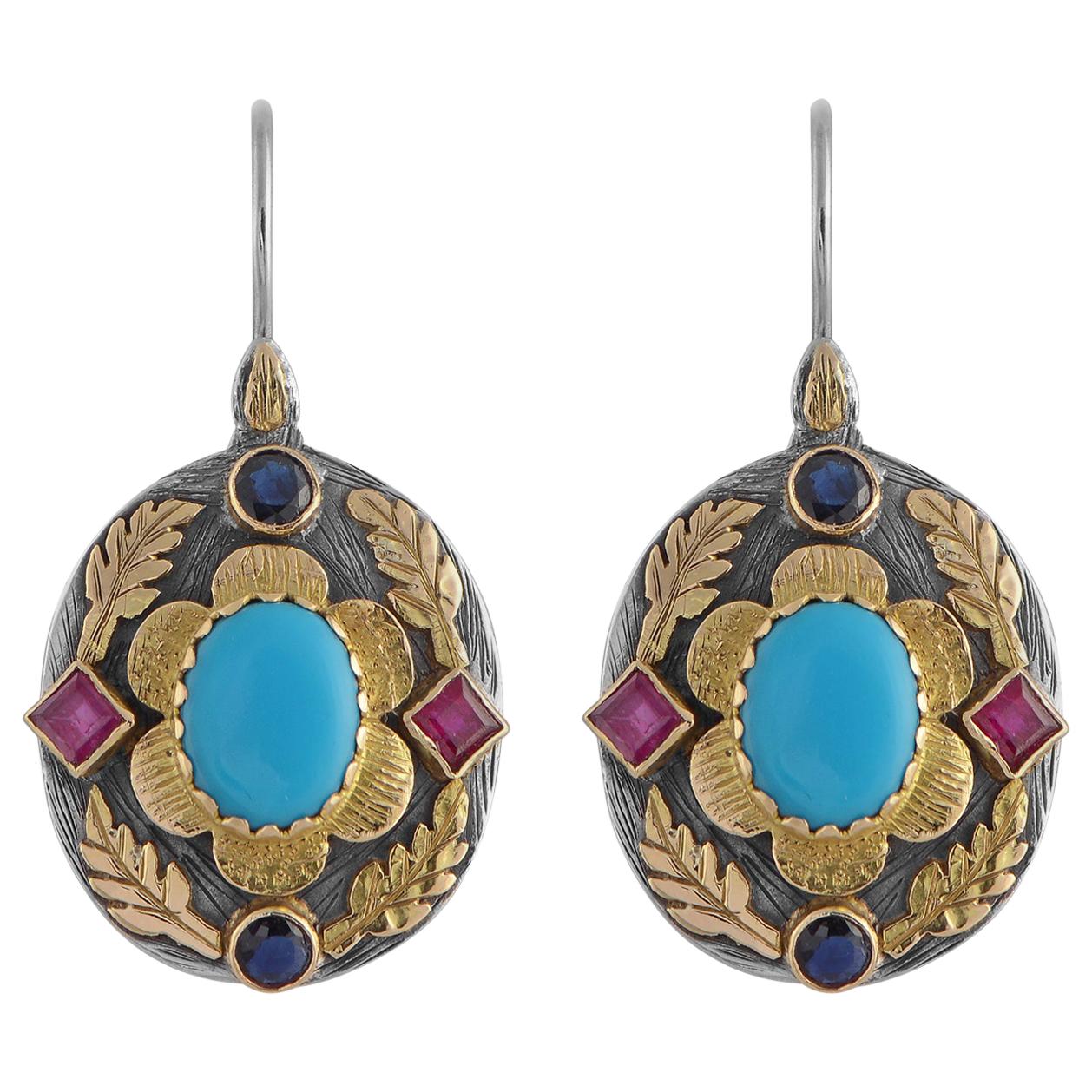 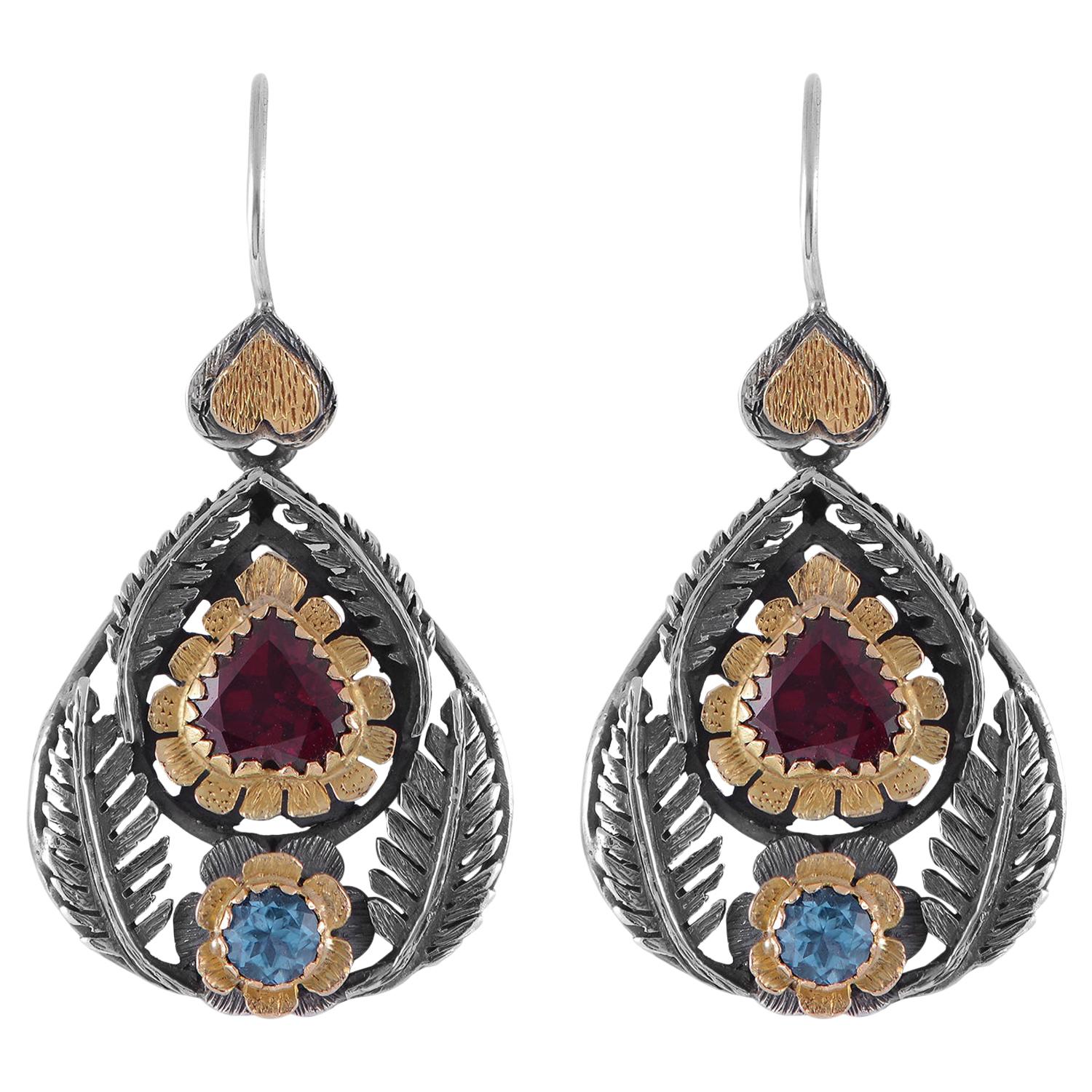 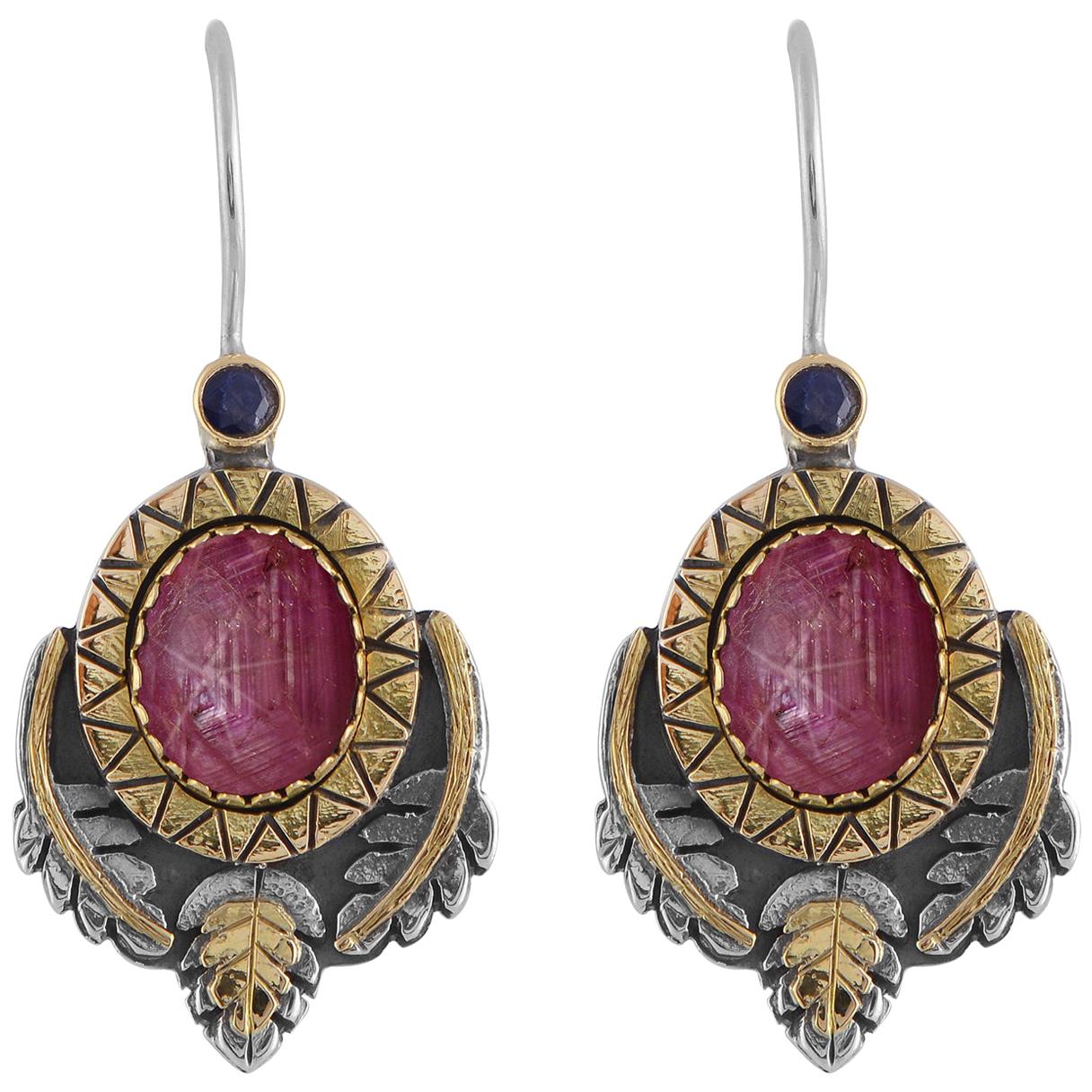 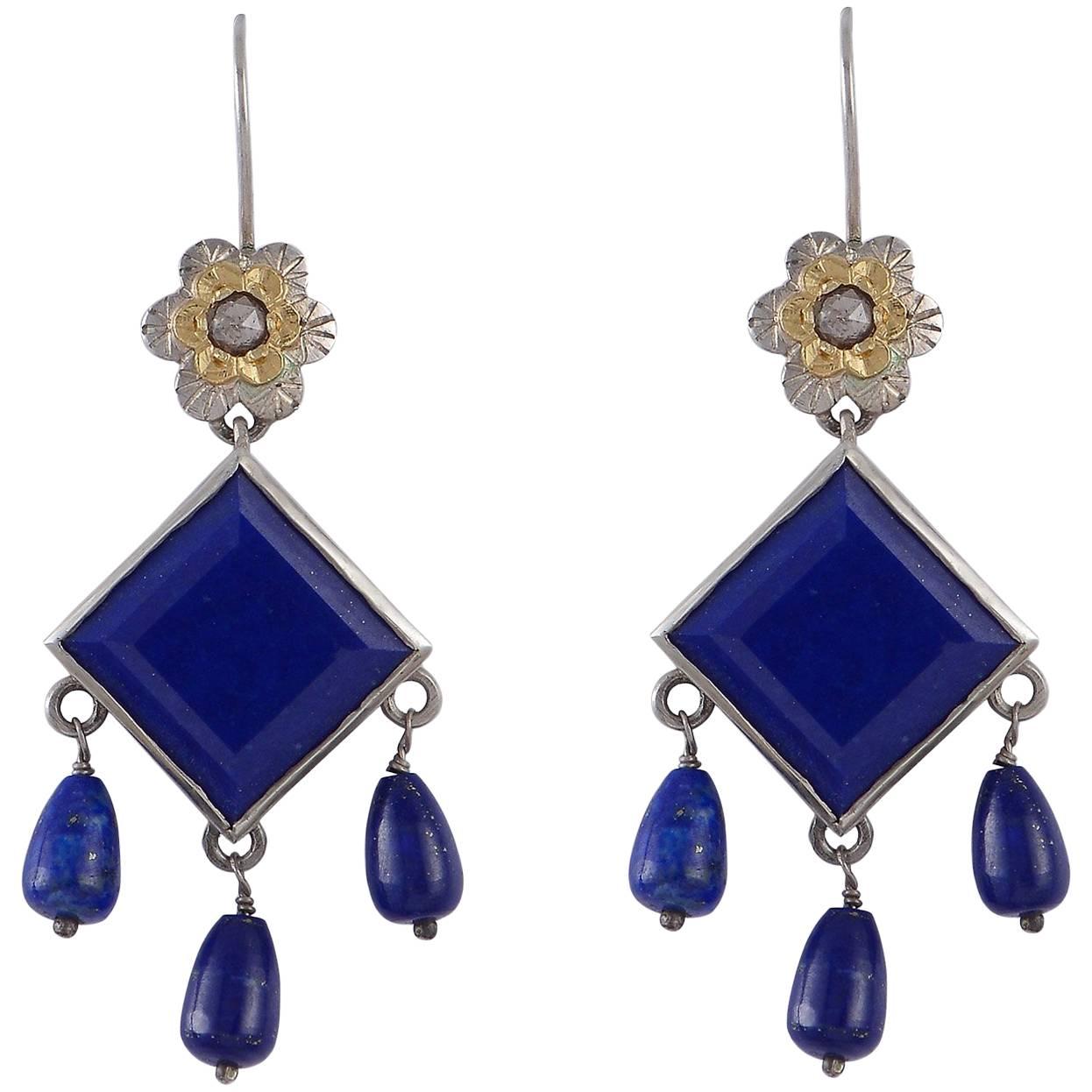 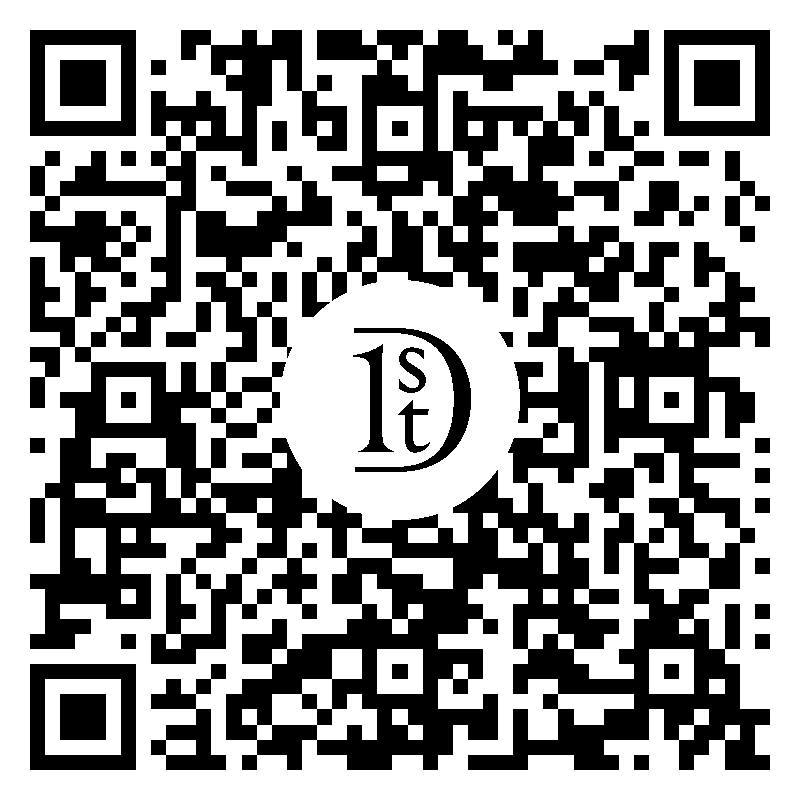 These exquisite one of a kind Emma Chapman Pearl Diamond Tsavorite 18kt Gold Dangle Earrings, have been handmade in our workshops. They feature pearls which are embedded with full cut diamonds set in an 18kt gold flower. The earrings also have tsavorites at the top and the bottom which are set in intricate hand engraved 18kt gold and oxidized sterling silver. They have a matching pendant and earrings. Earrings dimension - 38mm from top of earrings hook x 24mm

Emma Chapman is an award winning designer of Best Luxury Handmade Jewellery Designer - UK. She uses gorgeous gemstones, precious metals and old couture techniques, to create unique, regal heirloom treasure for the 21st century. Her signature style is haute-bohemian in flavour, exotic and glamorous. It is inspired by mystical and spiritual symbols, drawing on ancient geometric motifs and patterns of Islamic Art and the decorative motifs of the Moghuls. All the jewellery is exquisitely handmade by master goldsmiths and stone –cutters, in her family run workshops in Jaipur, and has been featured in numerous magazines including Vogue, Harpers, Tatler, Elle and Conde Nast Traveller. She was originally discovered by Hilary Alexander, Fashion Director of the Telegraph and chosen as one of the most promising new designers of today. Since then she has exhibited numerous times at London Fashion Week, Premiere Classe Paris and in New York. She is a strong believer in supporting local craftsmen and keeping these dying arts alive, by bringing them into the 21st Century. These craftsmen have made jewellery for all the Royal Families of India over the centuries. She has a home in Jaipur as well as the UK where she spends several months of the year. Emma Chapman’s designs are a contemporary twist on classic traditions of royal adornment, they are rock treasure for today, one of a kind high fashion statements which are individualistic and dramatic. 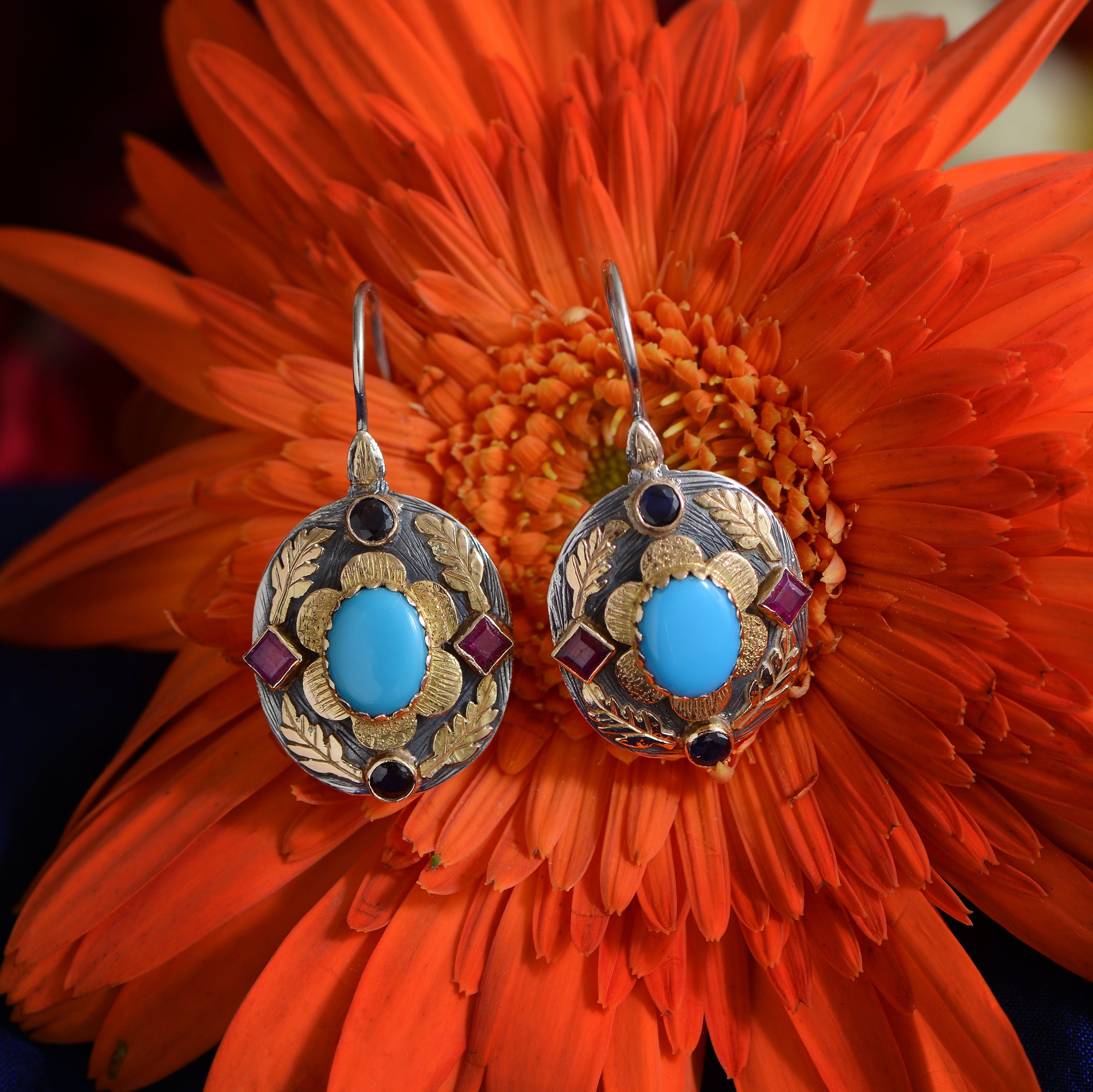 About the Seller
5 / 5
Located in Frome, United Kingdom
Vetted Seller
These experienced sellers undergo a comprehensive evaluation by our team of in-house experts.
Established in 2008
1stDibs seller since 2017
114 sales on 1stDibs
Typical response time: 8 hours
More From This Seller

$2,560 Sale Price
20% Off
Free Shipping
Caviar 18 Kt & Sterling Large Round Dangle Earrings, Round 18kt/925 XL Earrings
Located in Austin, TX
These precious earrings are a MUST BUY! These earrings were handmade with 18 karat yellow gold that have been bonded with a sterling silver disk. The 18 kt yellow gold round earring...
Category