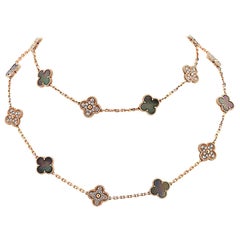 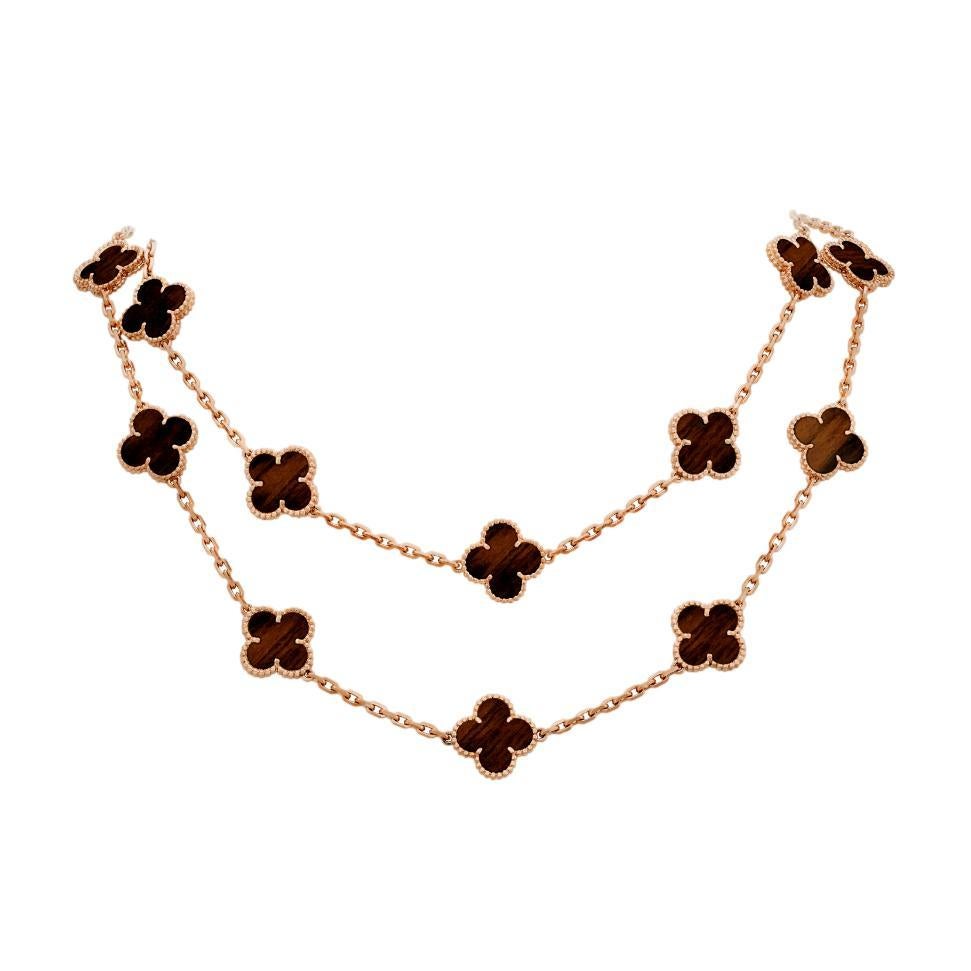 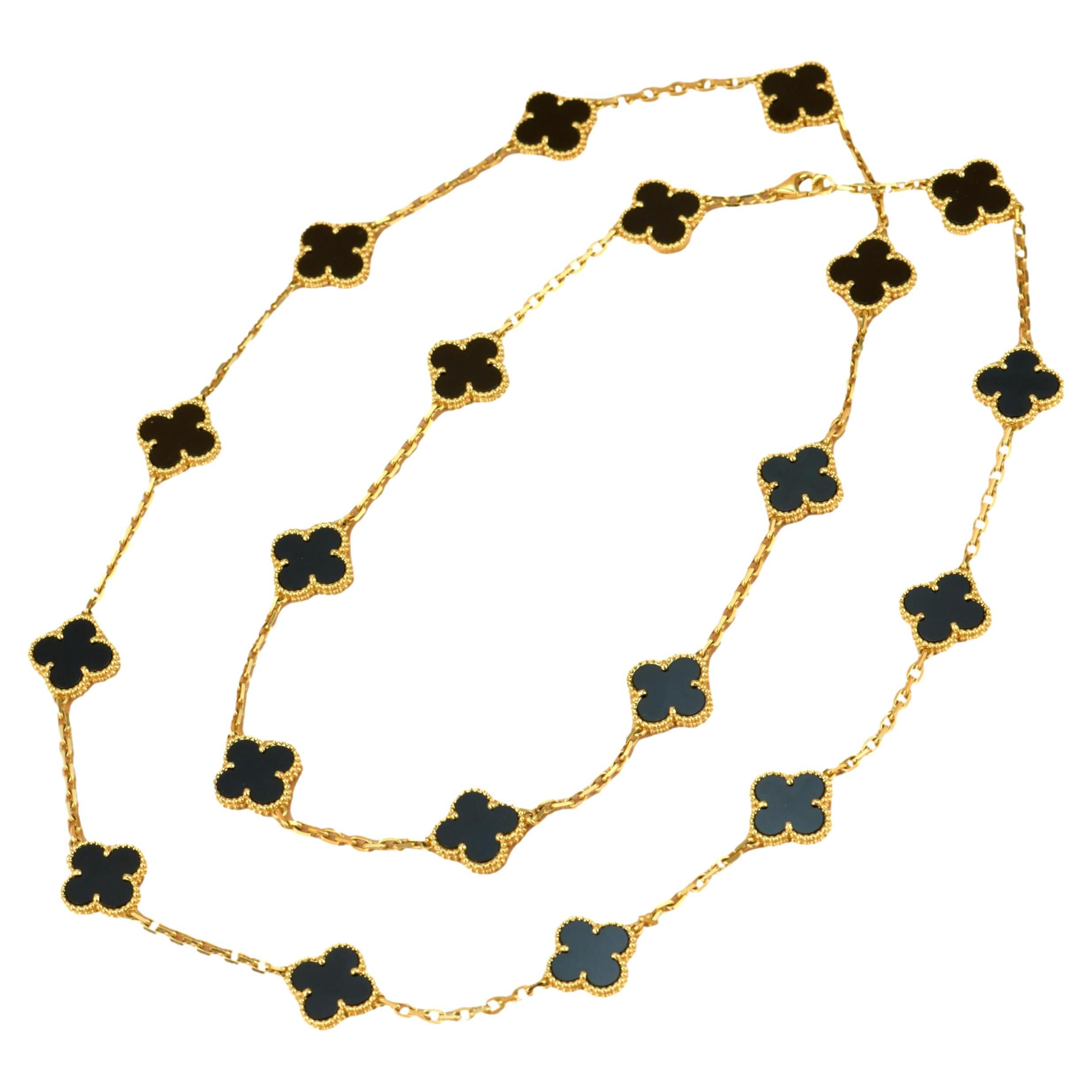 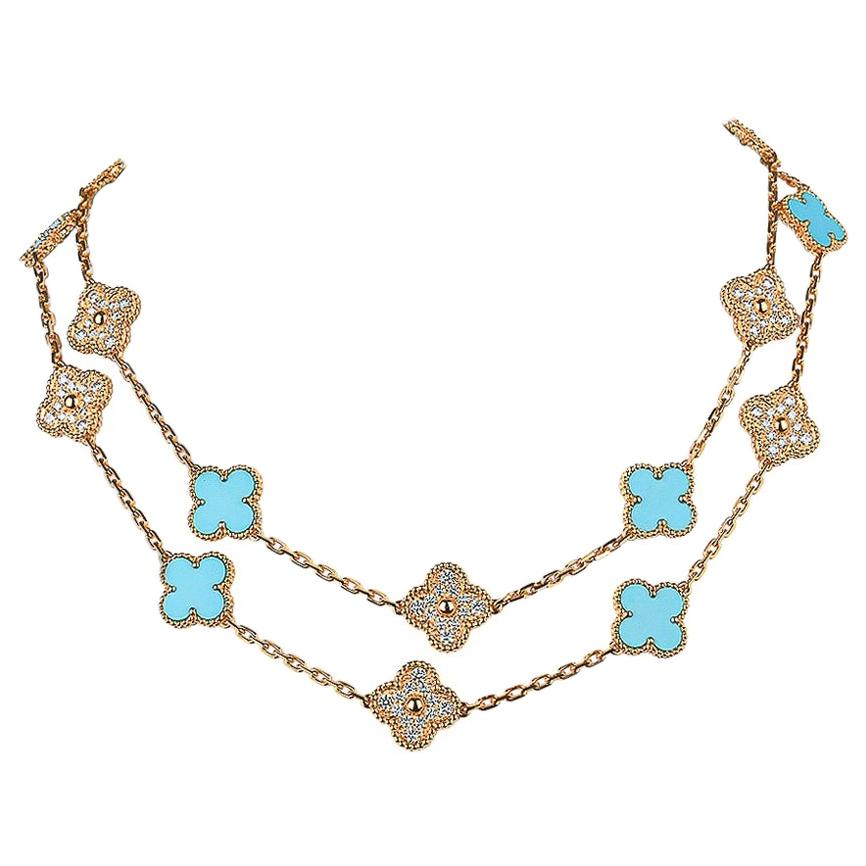 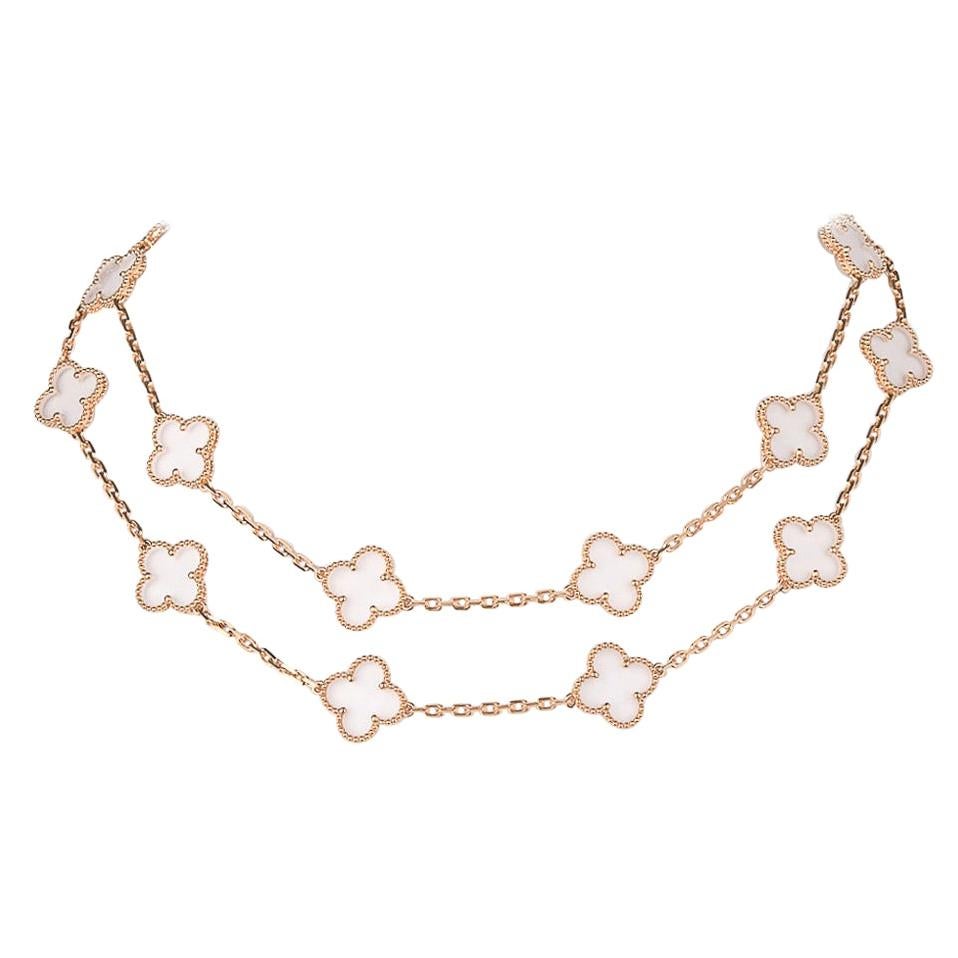 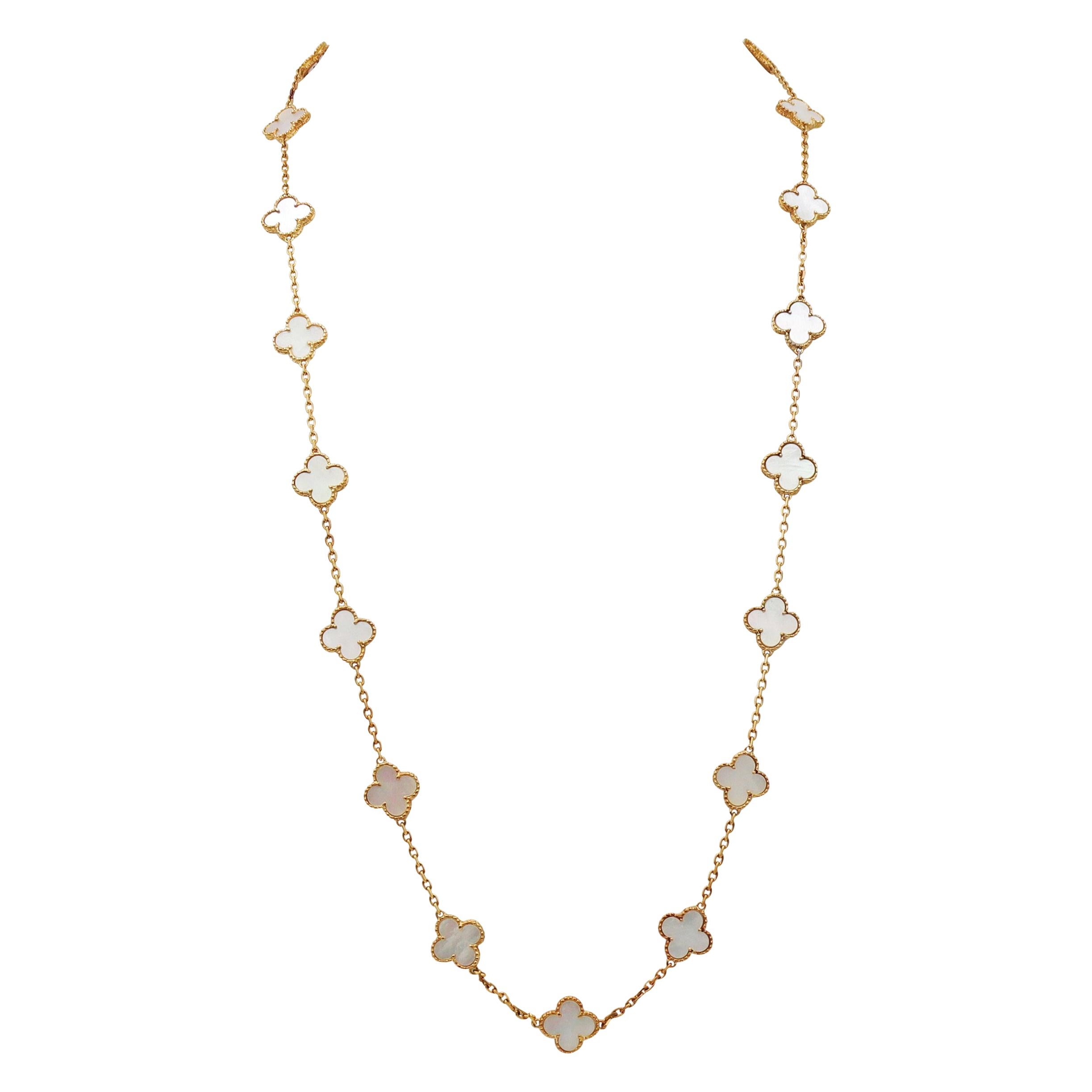 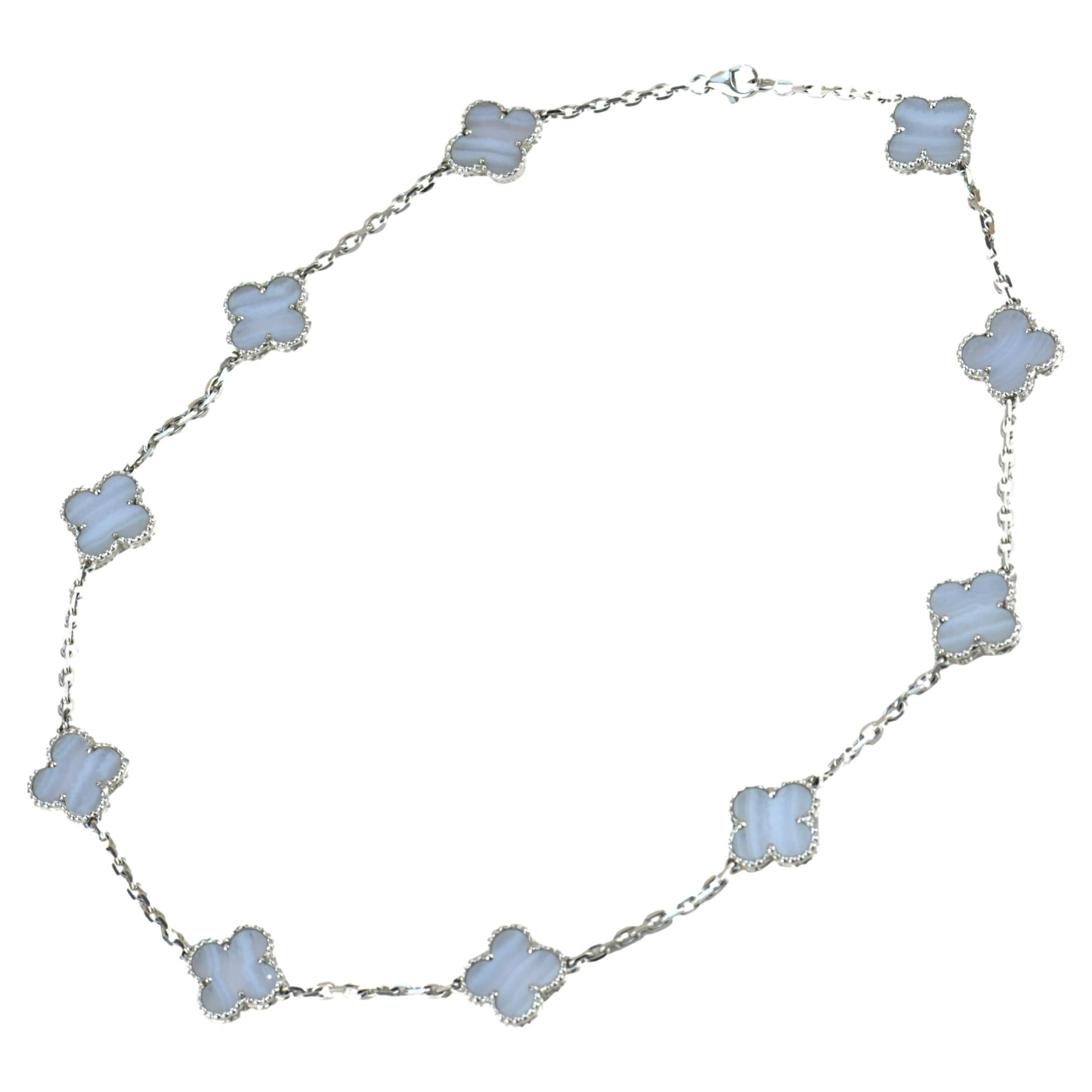 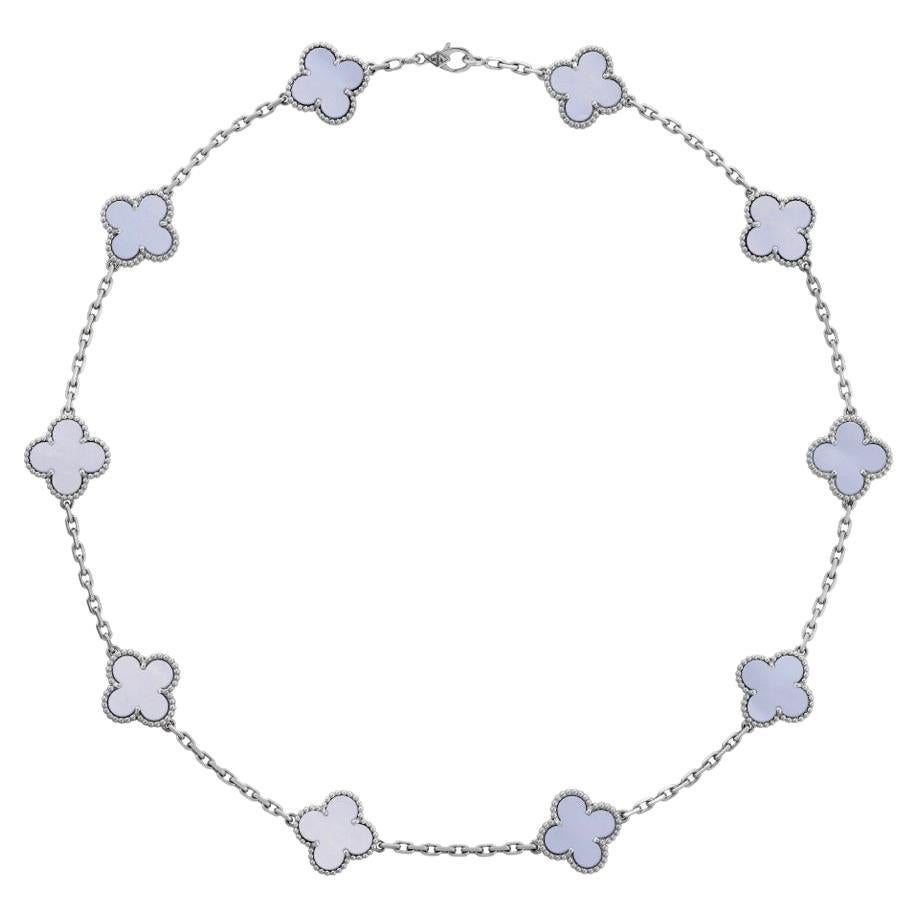 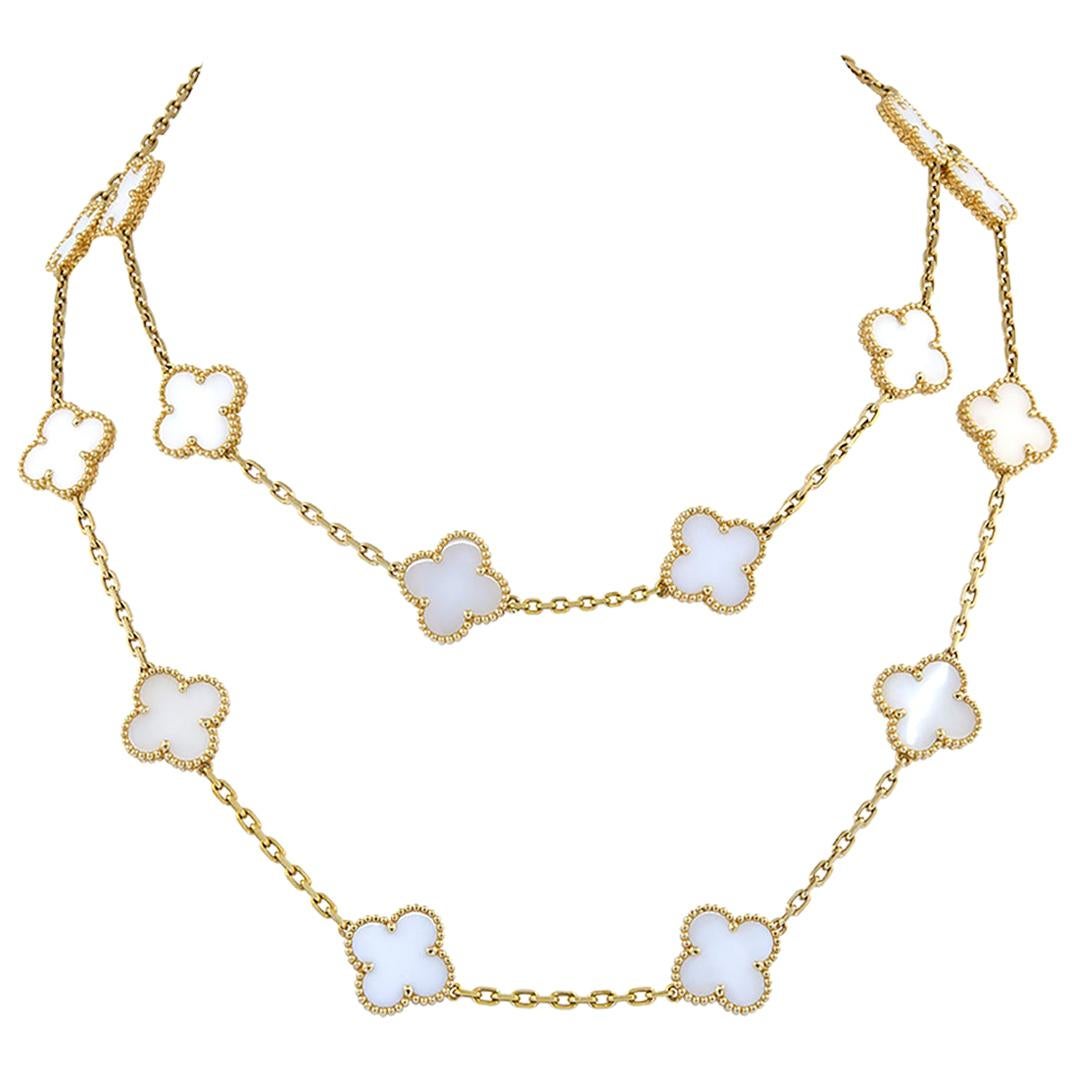 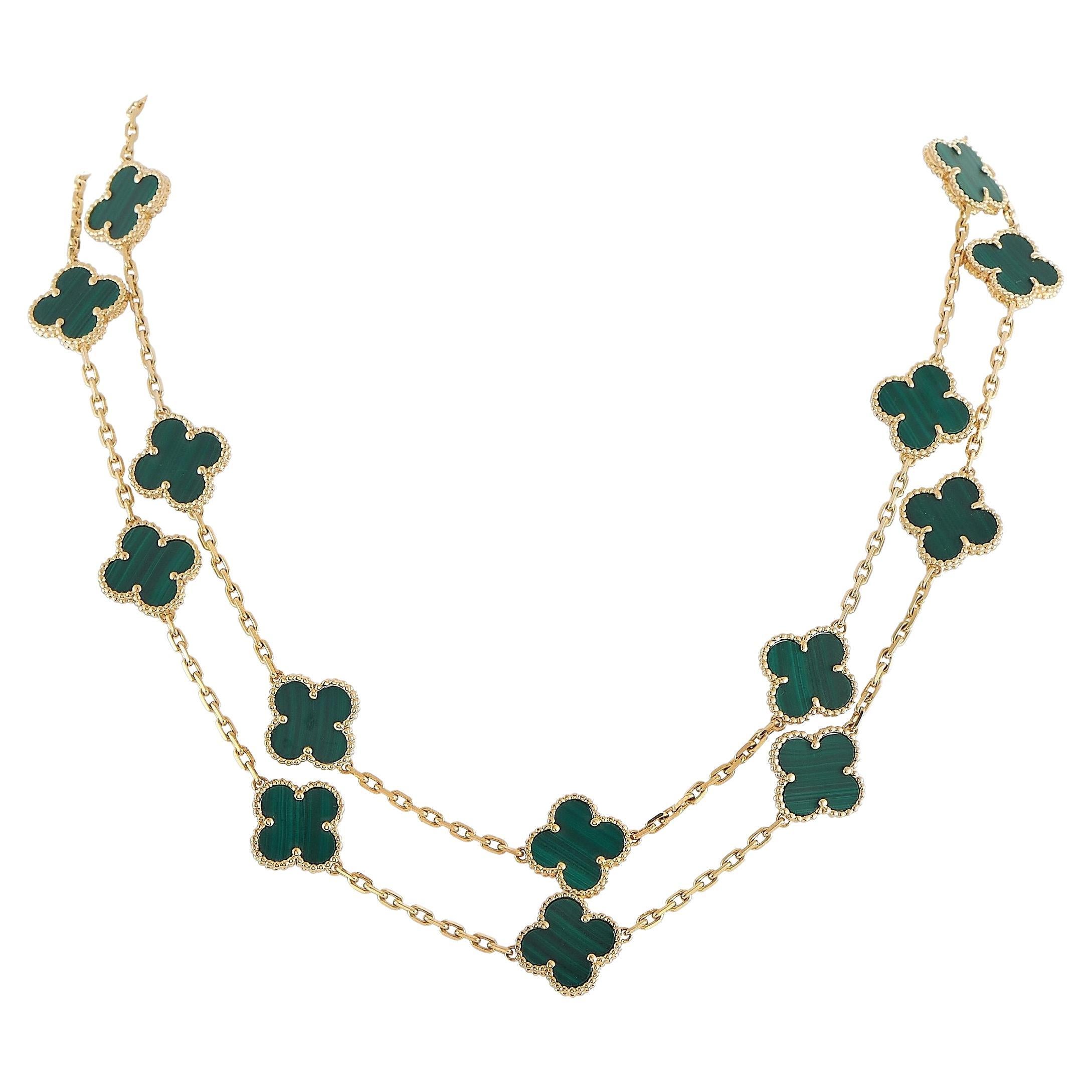 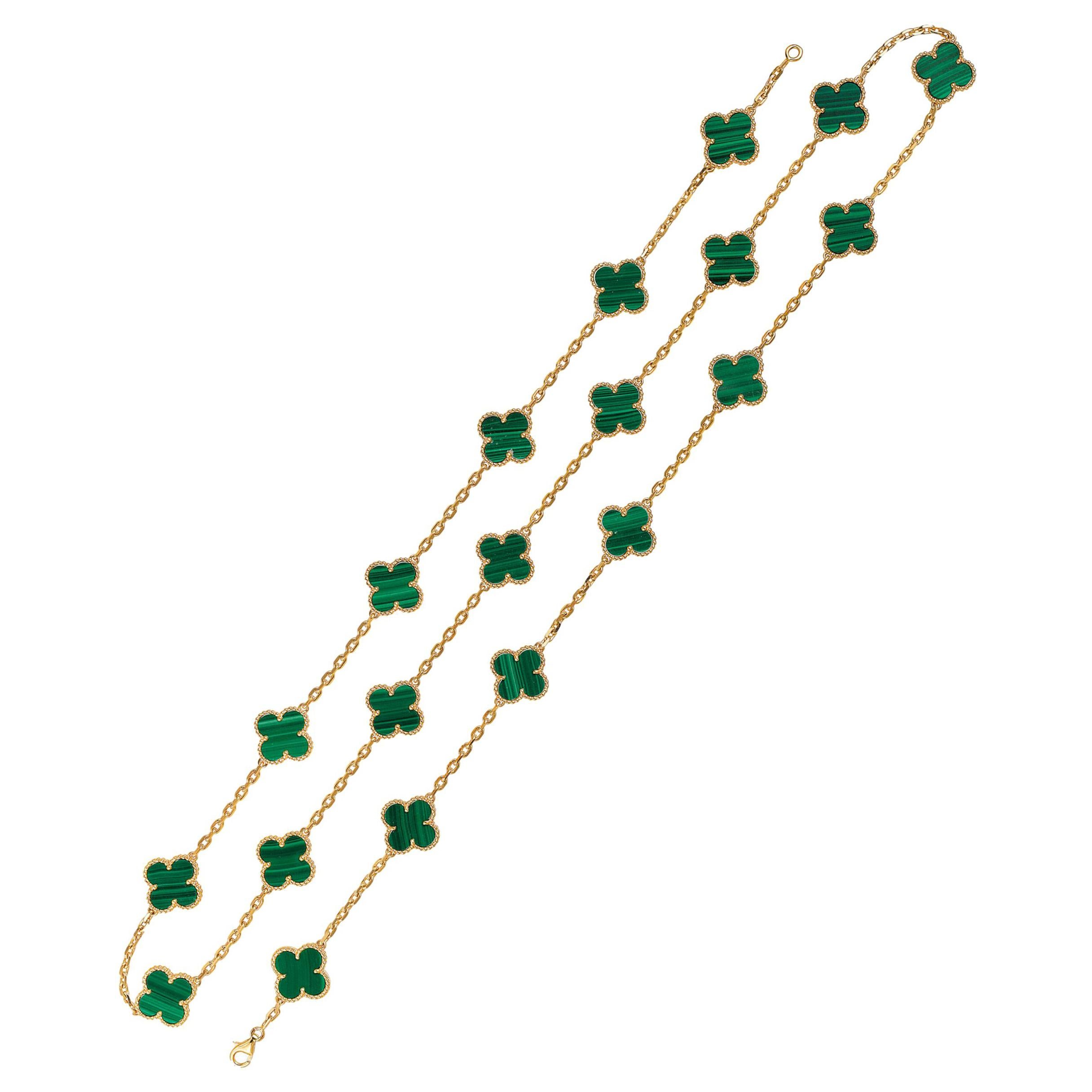 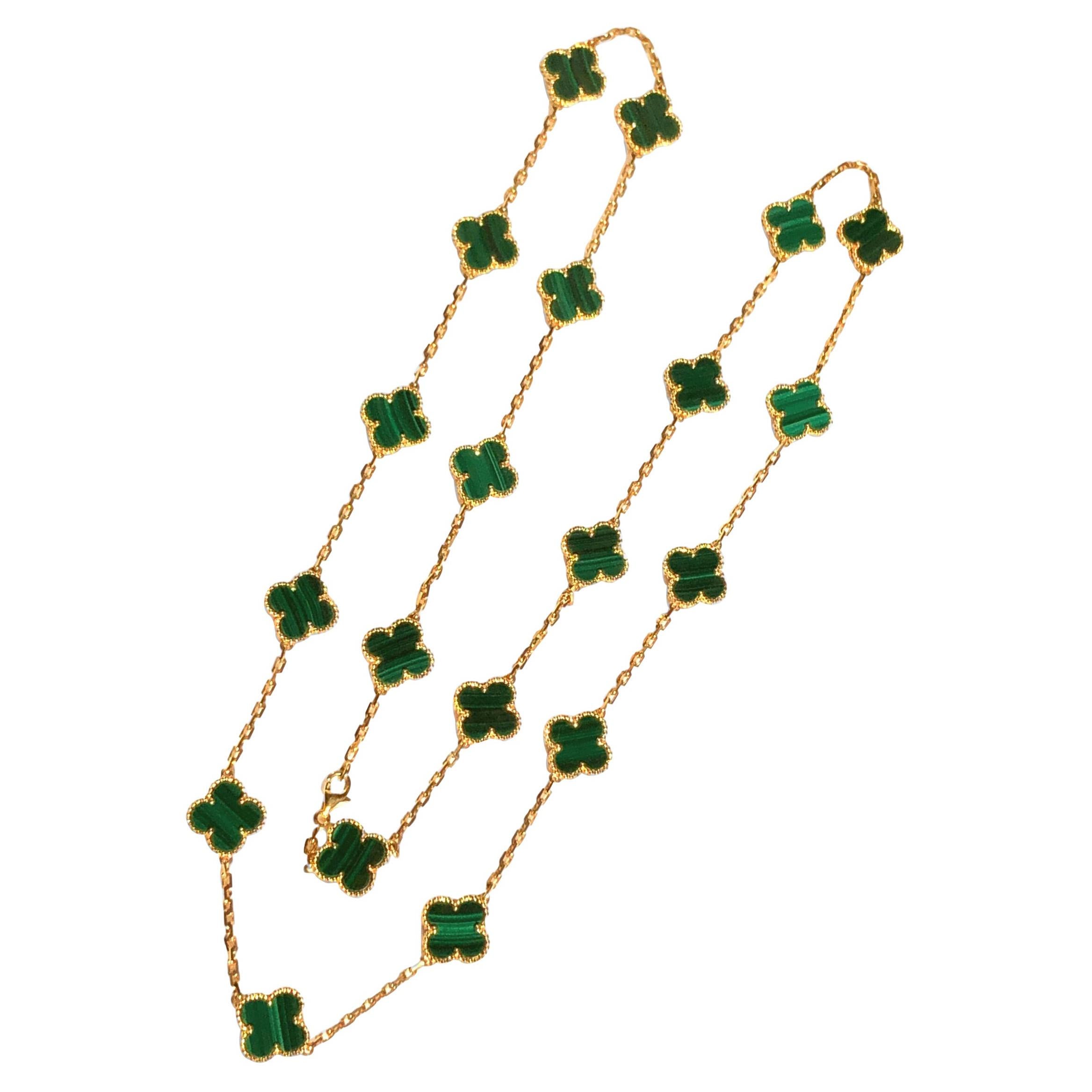 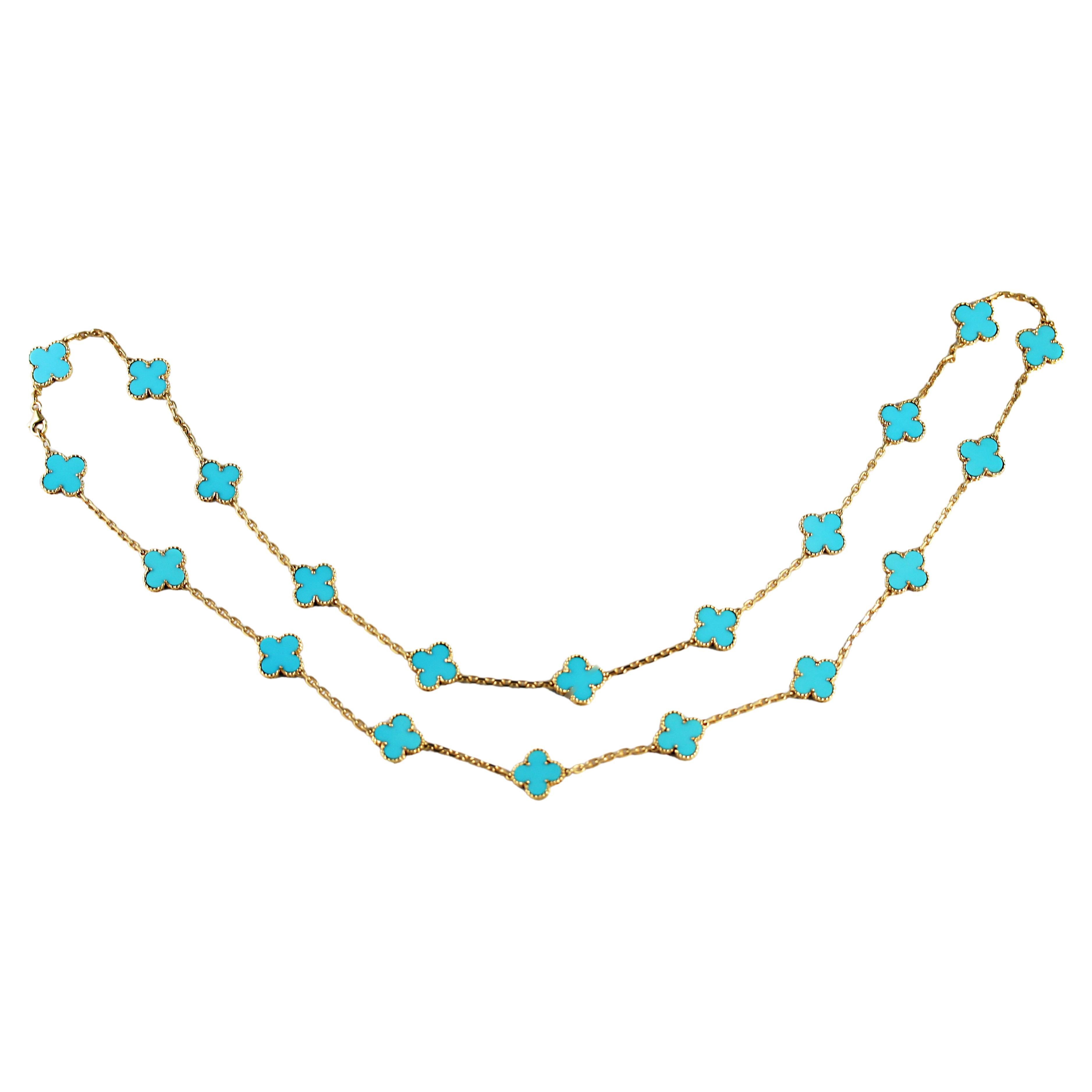 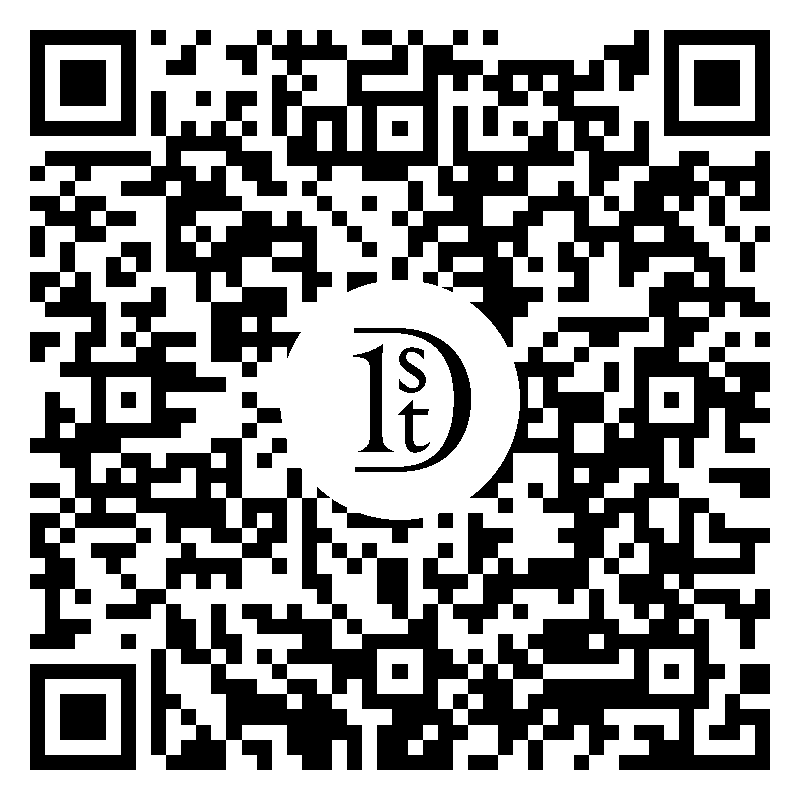 From the House of Van Cleef & Arpels, this exquisite 50th Anniversary Vintage Alhambra long necklace, 20 motifs, finely handmade in 18 Karat yellow gold, features an asymmetrical design inspired by the clover leaf. Ten clover motifs encrusted with 120 round brilliant cut diamonds weighing approximately 4.83 carats total, D-F color, VVS clarity, alternate with ten clover motifs embellished with gray mother of pearl. The clover motifs are interspersed on a rose gold chain measuring 33.6 inches in length. The necklace is accompanied with a box and paperwork. A truly dazzling and harmonious jewelry creation showcasing Van Cleef & Arpels astonishing craftsmanship. Trendsetting for over a hundred years Van Cleef & Arpels has combined unparalleled artistry and scrupulous gem selection to create some of the world’s most coveted designs. Our pieces are all accompanied by an appraisal performed by one of our in-house GIA Graduates. They are also accompanied by GIA grading report(s), AGL grading report(s), original certificate(s) and other documents, if specified in the listing. We guarantee all products we sell and our number one priority is your complete 100% satisfaction 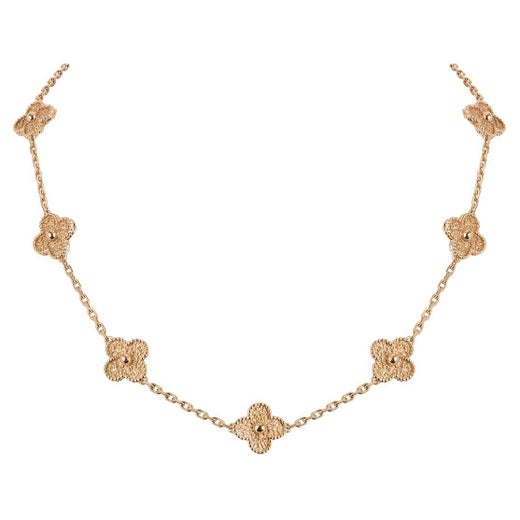 One of the world’s foremost jewelry houses, Van Cleef & Arpels is particularly noted for a focus on technical virtuosity, craftsmanship and artistry, evident since its beginning. Rather than create earrings, bracelets, necklaces and other adornments primarily for the aim of displaying of wealth and opulence, Van Cleef & Arpels sought to produce jewelry that projected the wearer’s taste and style. The company was formed a year after the 1895 marriage of Alfred Van Cleef, the son of a gem cutter, to Estelle Arpels, daughter of precious-stones dealer Salomon Arpel. Ten years later, Van Cleef & Arpels opened its first boutique on the Place Vendôme in Paris, setting the march on a square now crowded with dealers in bijouterie. (The company still occupies the New York flagship store opened in 1939 at Fifth Avenue and 57th Street.) Born from a union of expertise in both jewelry making and gem selection, the Van Cleef & Arpels distinguished itself with both the consistency of the color and clarity of its stones and the creativity of its designs. In doing so, the house would win a roster of dedicated, fashion-conscious clients that included the Duchess of Windsor, Marlene Dietrich, Barbara Hutton, Jacqueline Onassis and Elizabeth Taylor. In 1933, Van Cleef & Arpels patented its trademark Mystery Setting — a technique by which gems are fitted into an intricate matrix of slots and “drawers” that keep the setting hidden. Another signal innovation was the Zip necklace, introduced in 1951, which can be worn either around the neck or, with the zipper closed, as a bracelet.But as much as to the firm’s craftsmanship, clients have been drawn by the insouciance and playfulness of Van Cleef & Arpels designers, as well as their attunement to the cultural climate. After the discovery of Tutankhamun’s tomb in 1922, the company produced several lavish pieces featuring hieroglyphics and other Egyptian motifs to go along with the geometric Art Deco jewelry of that decade and the next. Following World War II, as symbols of freedom and rebirth, the firm focused on naturalistic forms such as birds, flowers, fruit and flying insects. High society’s 1960s fascination with the Near East and India prompted such pieces as the best-selling Alhambra necklace, popularized by Princess Grace. Lately, attention among collectors and connoisseurs has centered on Van Cleef & Arpels’s quality of workmanship as much as its glamour. The firm was the subject of a 2012 show at the Cooper-Hewitt, Smithsonian Design Museum, as well as exhibitions at the Bowers Museum in Santa Ana, California, in 2013 and at the Musée des Arts Décoratifs in Paris in 2014.Find an exquisite collection of Van Cleef & Arpels jewelry on 1stDibs. 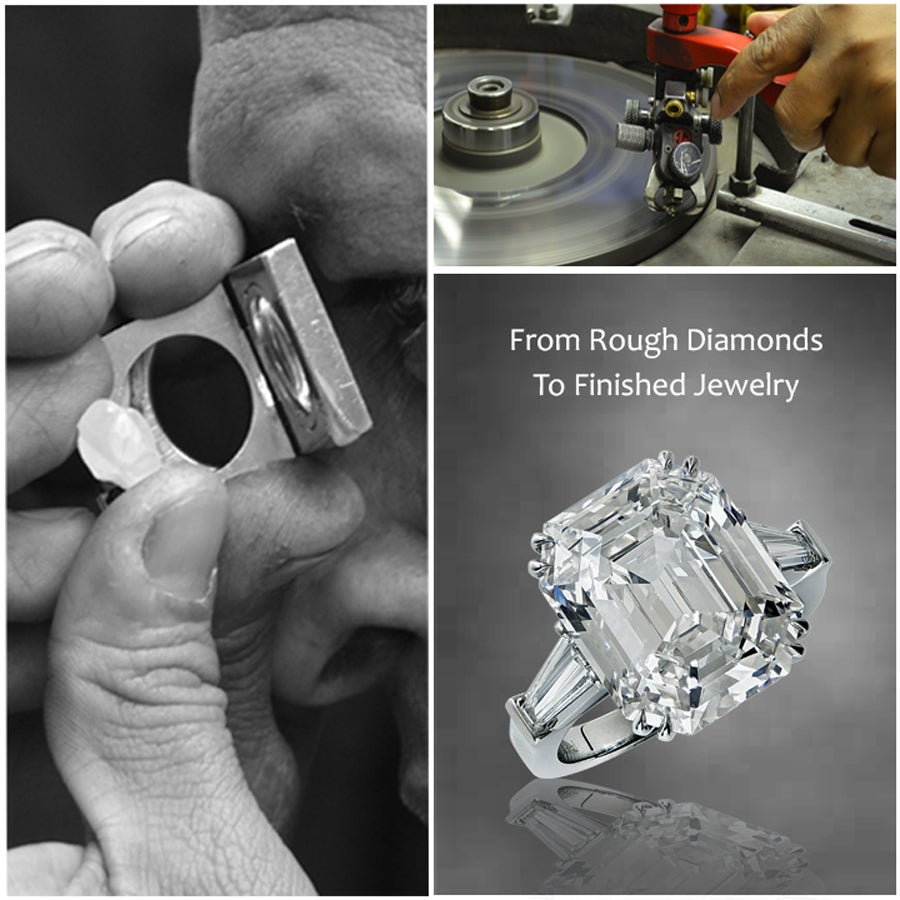 About the Seller
5 / 5
Located in Miami, FL
Recognized Seller
These prestigious sellers are industry leaders and represent the highest echelon for item quality and design.
Platinum Seller
These expertly vetted sellers are 1stDibs' most experienced sellers and are rated highest by our customers.
Established in 2010
1stDibs seller since 2014
518 sales on 1stDibs
Typical response time: 2 hours