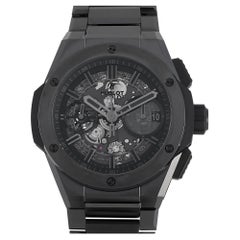 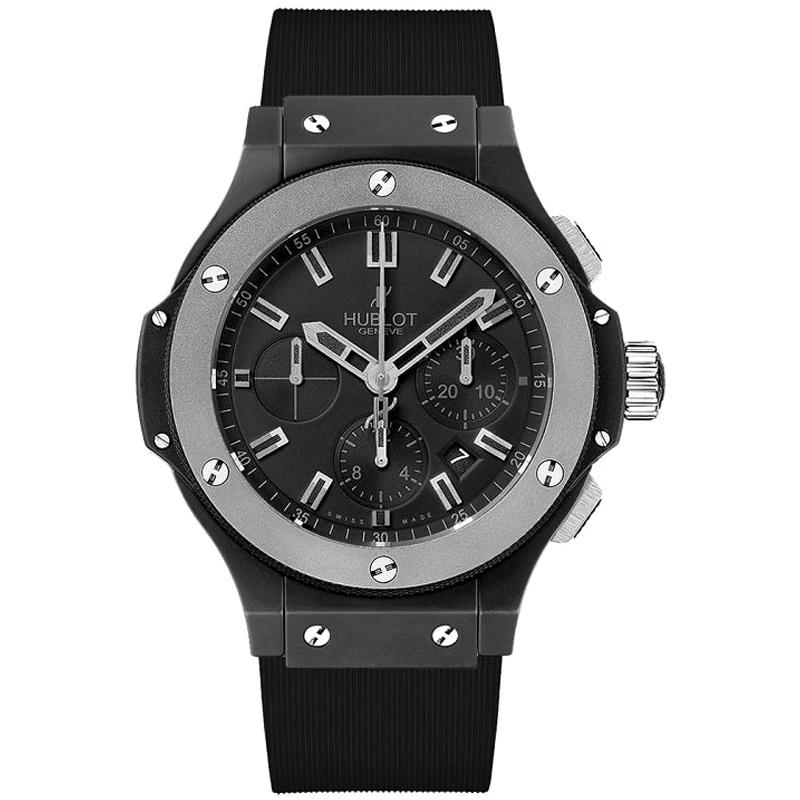 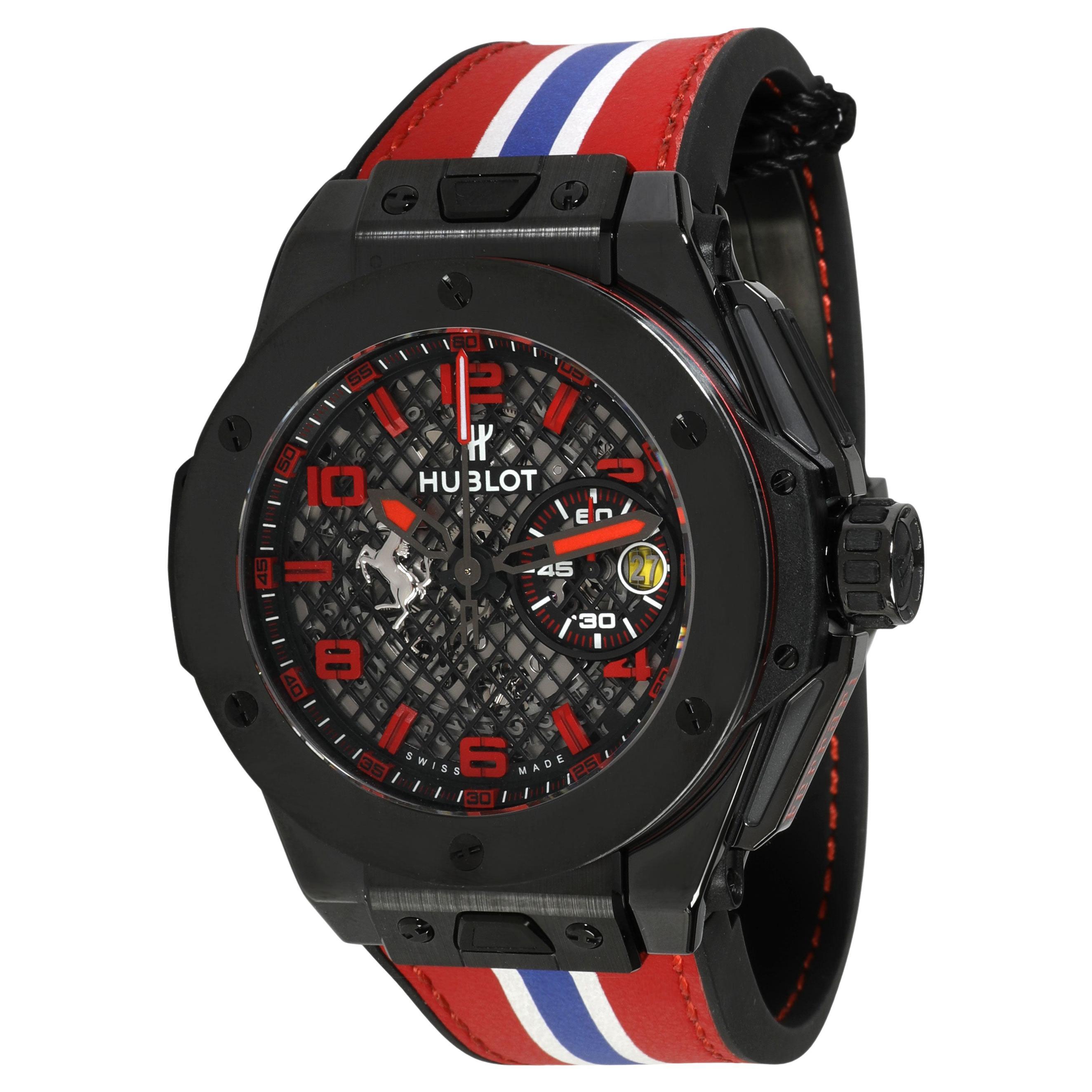 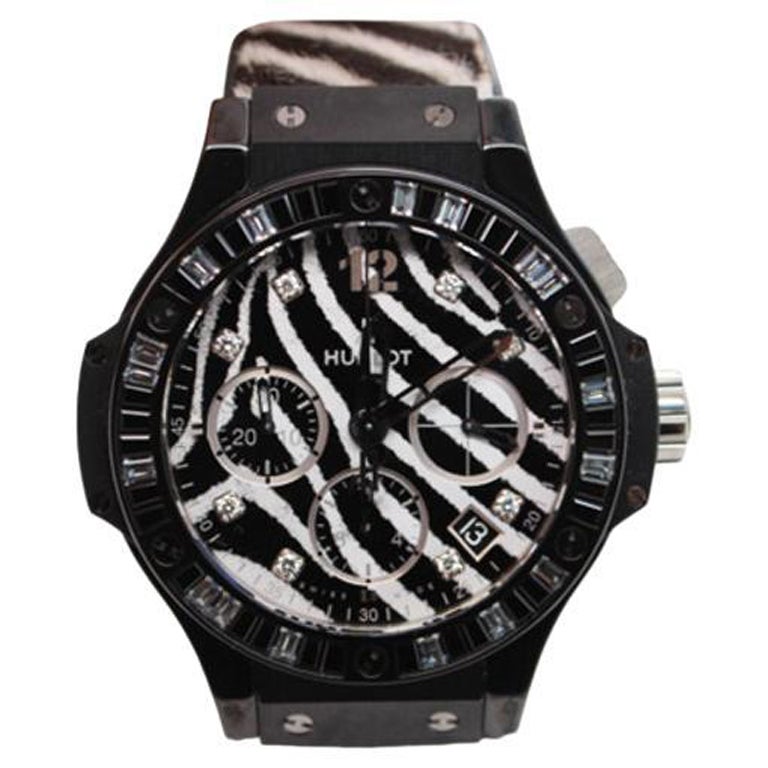 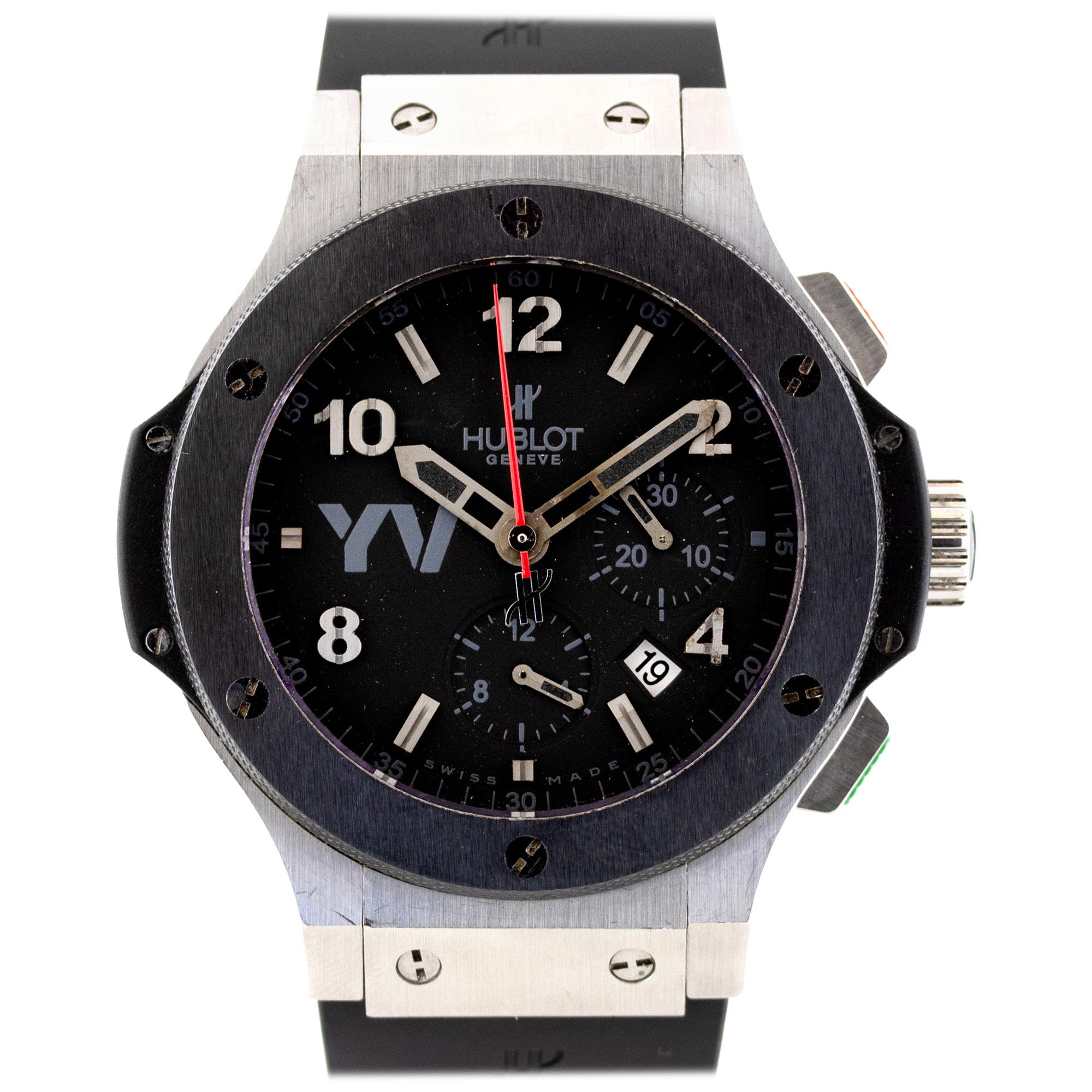 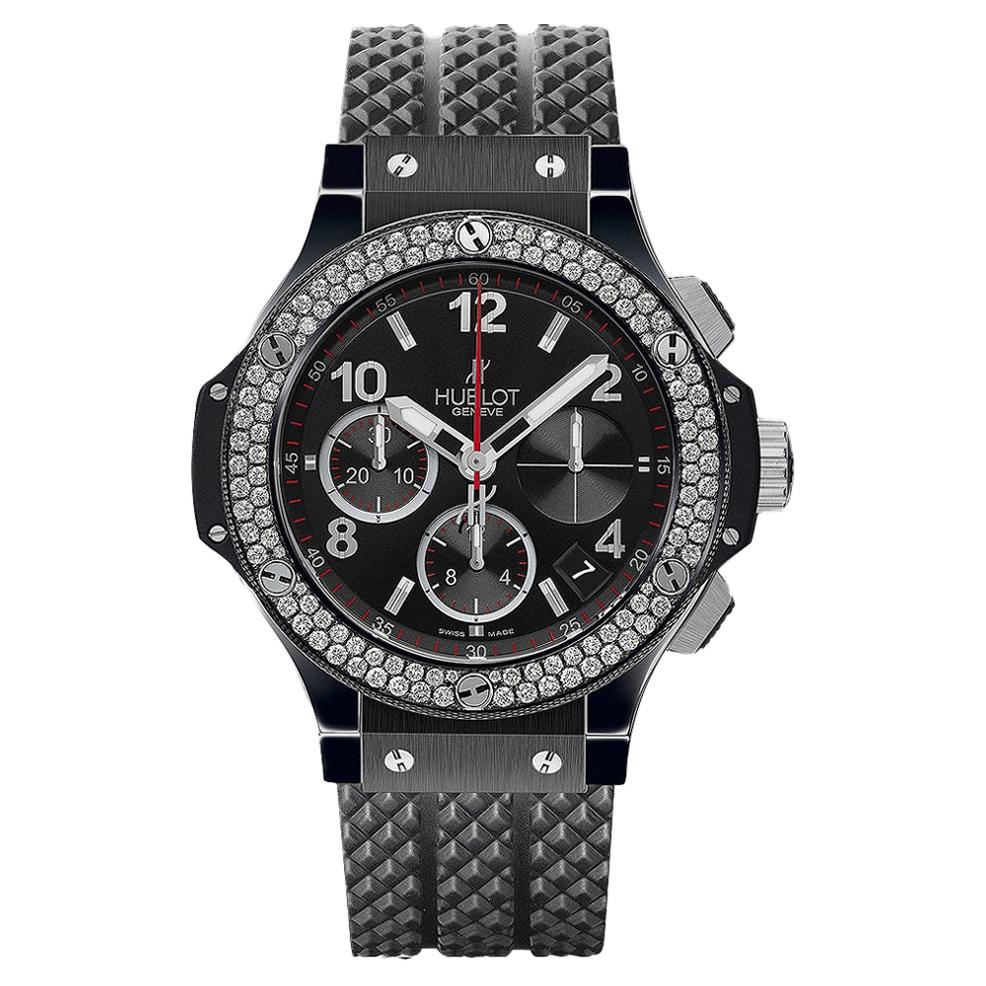 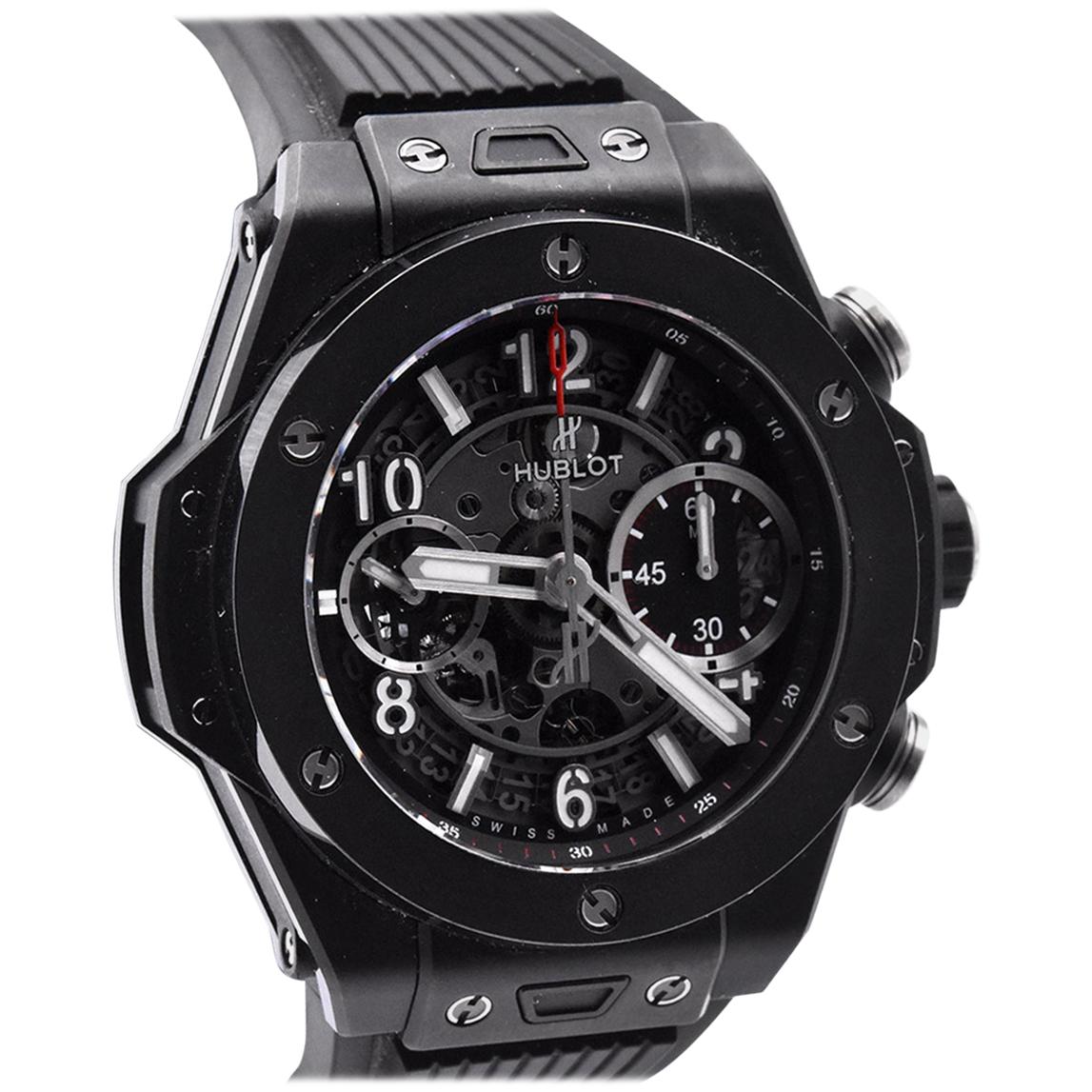 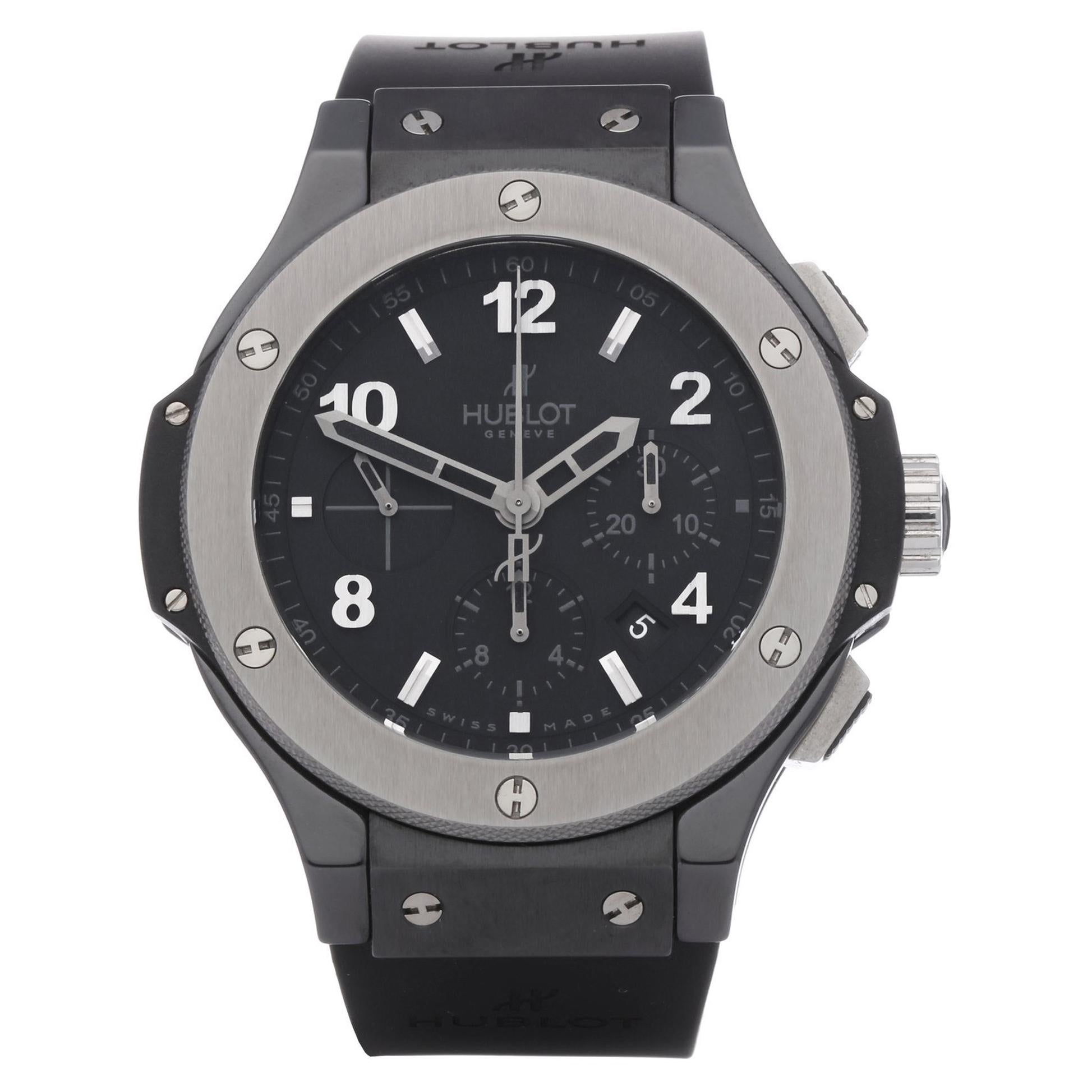 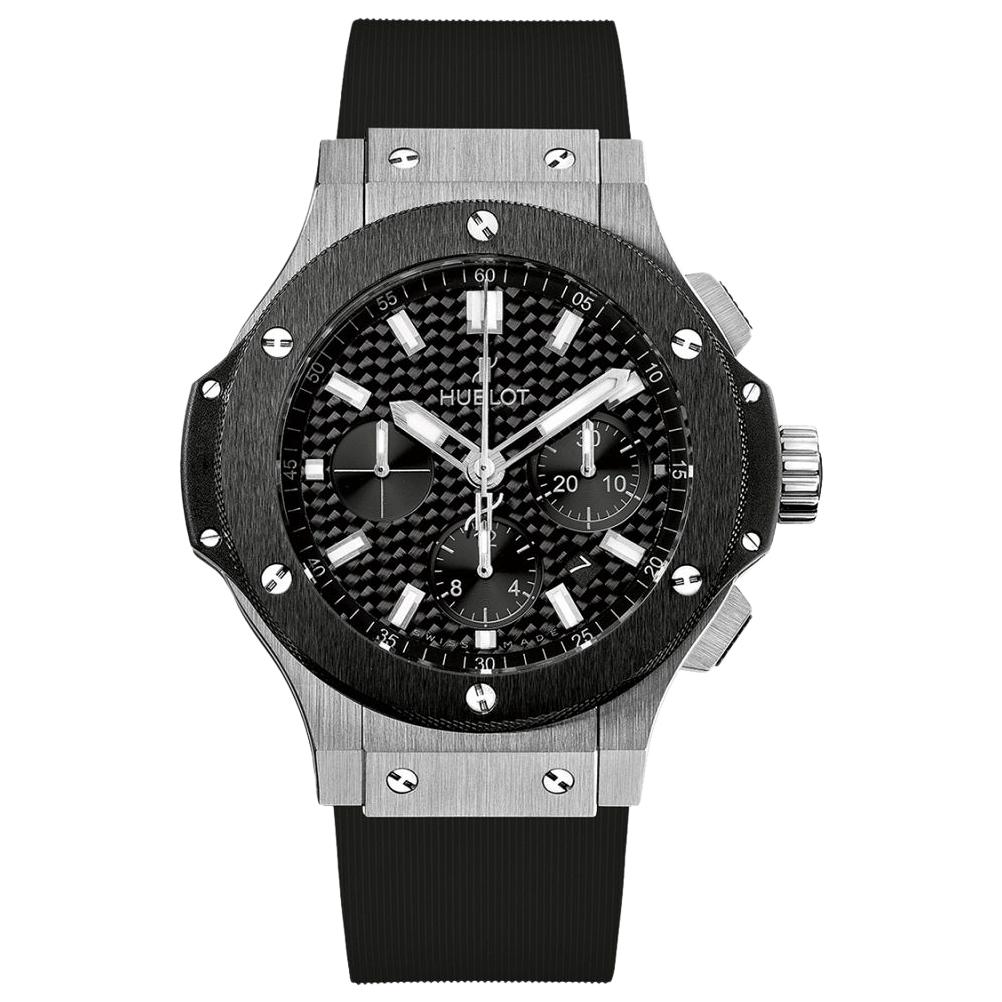 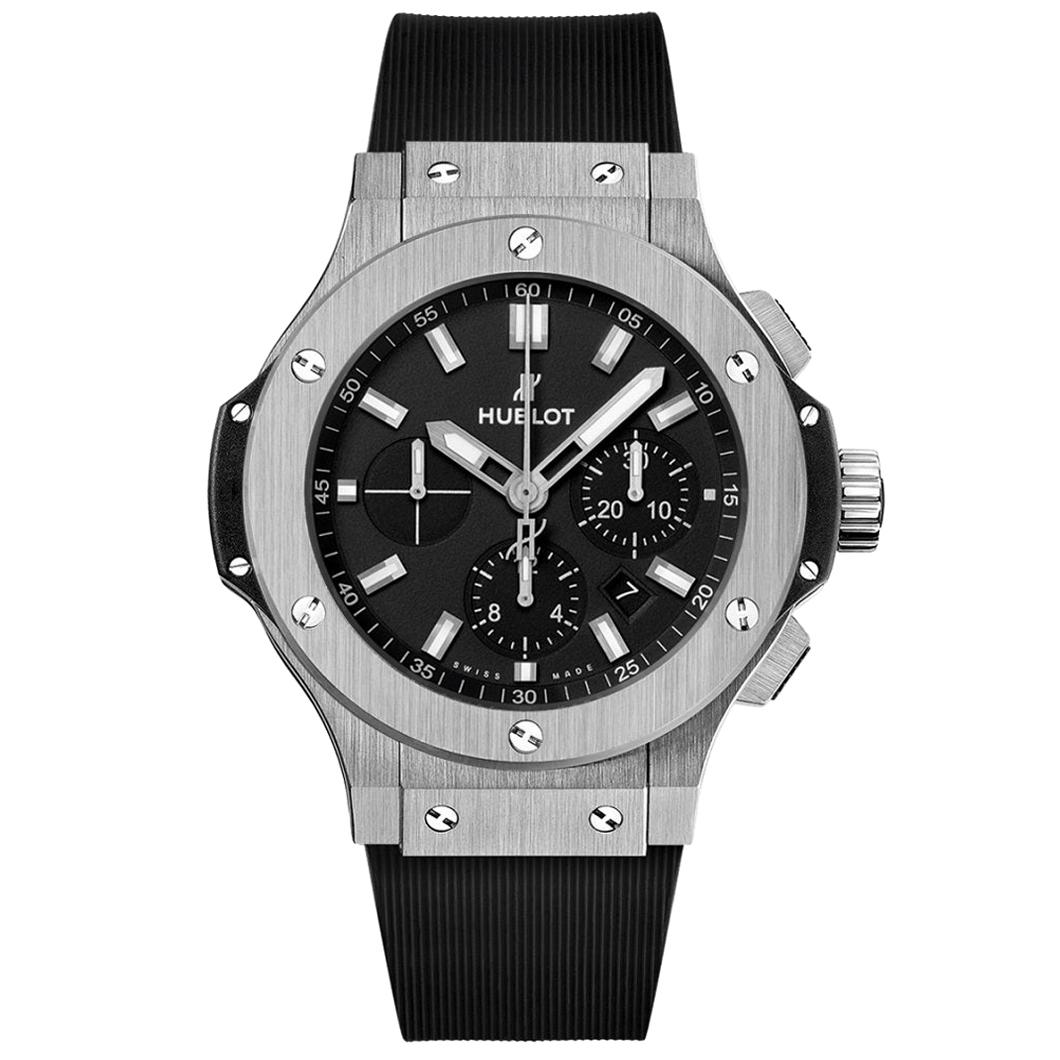 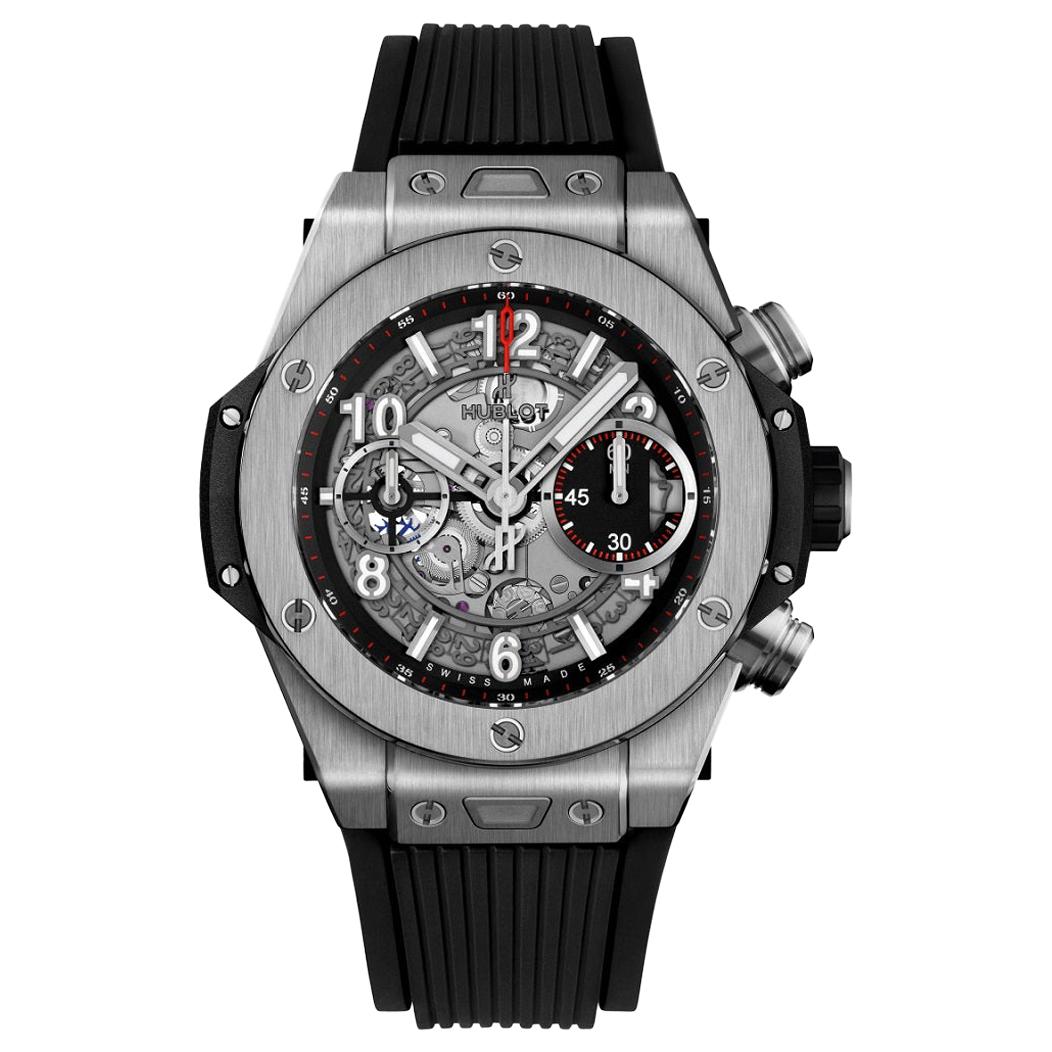 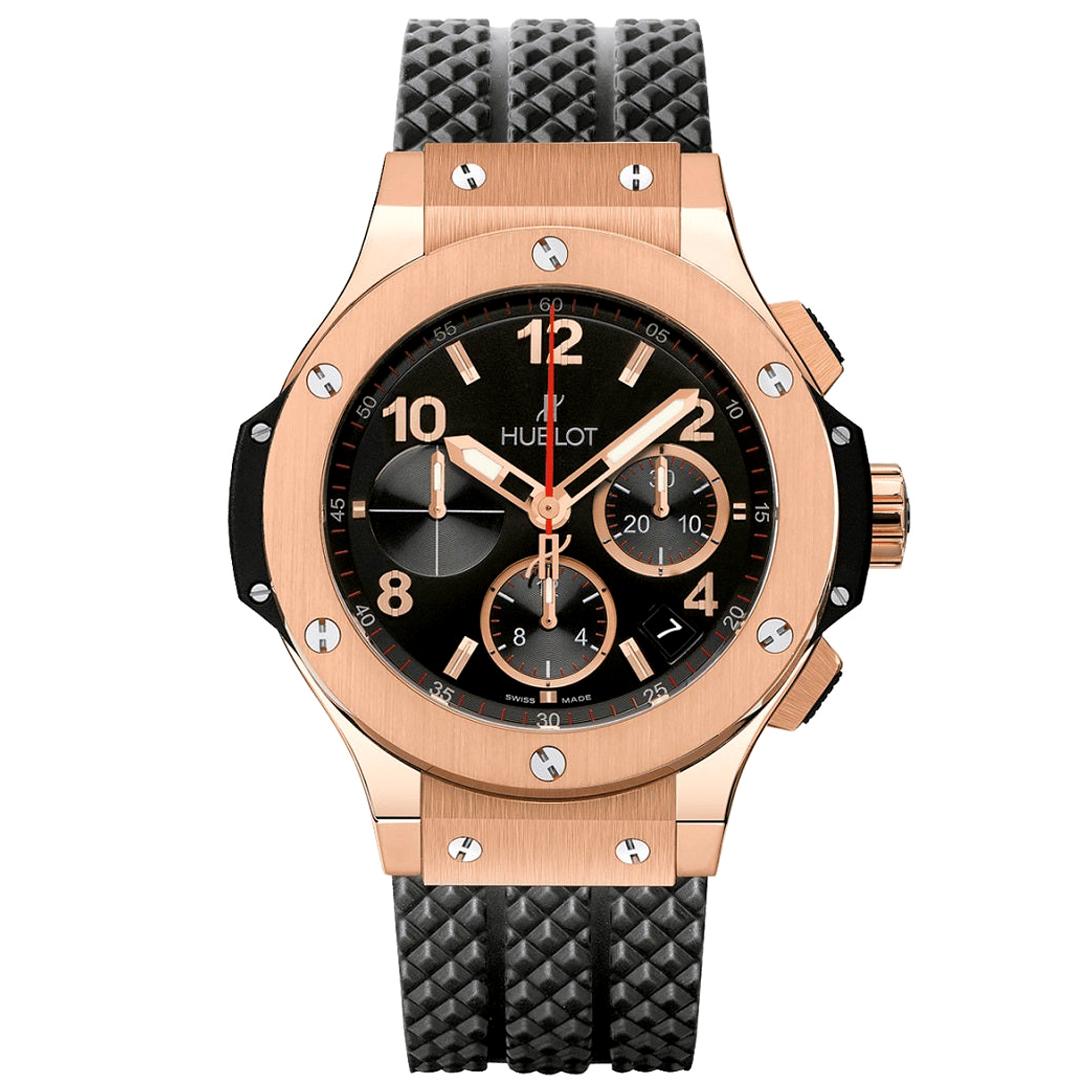 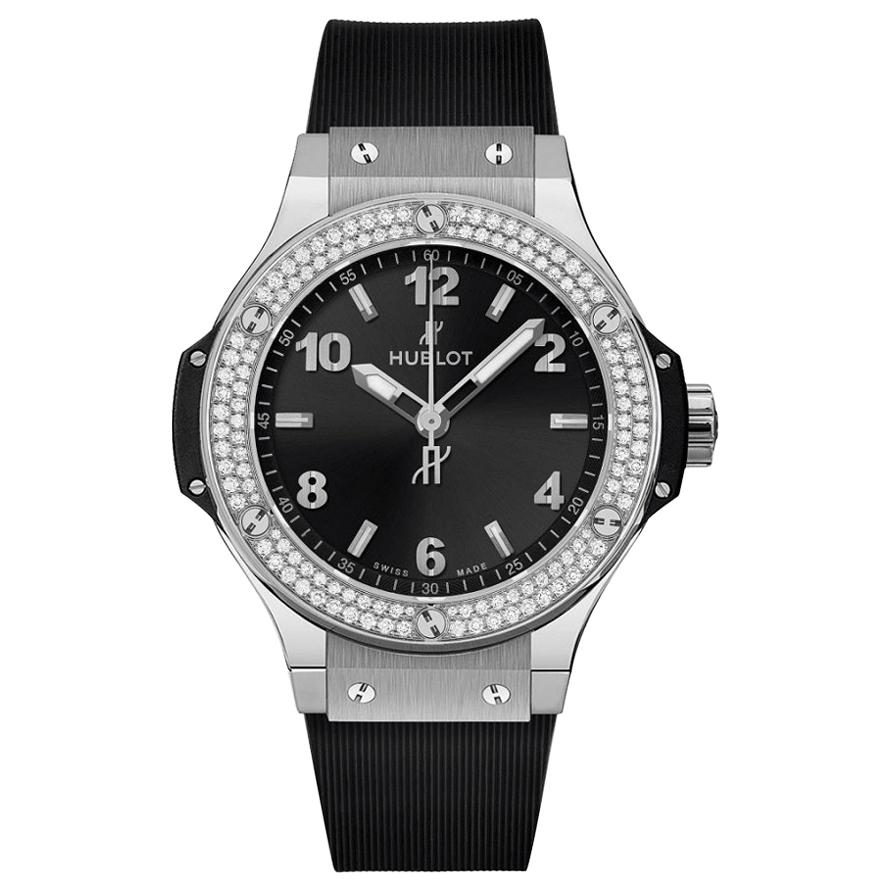 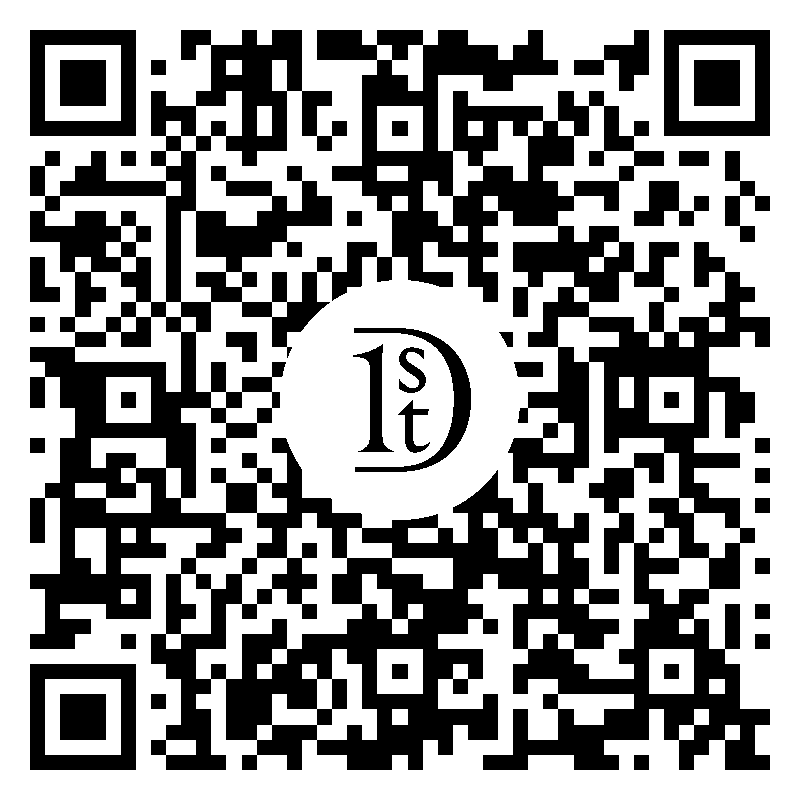 The Hublot Big Bang Integral Watch, reference number 451.CX.1140.CX, is a contemporary take on a classic timepiece. A 42mm case, bezel, and bracelet crafted from black ceramic provides the perfect foundation for this bold, stylish accessory. But this eye-catching watch truly makes a statement thanks to the matte black skeleton dial, which displays luminous gunmetal hands, index hour markers, Arabic numeral minute markers at 5 minute intervals around the outer rim, a date display at the 3-o-clock position, and dual subdials. Powered by a Caliber HUB1280 automatic movement, it features a 72-hour power reserve and a 100 meter water resistance. This timepiece is offered in unworn condition and includes the manufacturer’s box and papers.

Born into the family behind the Binda Group watchmaking company, Italian watchmaker Carlo Crocco (b. 1944) decided to leave the dynasty to create his own company called MDM Genève in 1976. He spent the next few years developing his bold debut product: the Hublot watch.Named for the French word for “porthole,” the Hublot, which debuted at the 1980 Baselworld watch and jewelry trade show, did indeed look like a porthole. What made the watch stand out, however, was its radical “fusion” approach to design — that is, the combination of a complex gold case with a band made from rubber. At the time, most high-end watches featured wristbands crafted from luxury materials, so the humble rubber material was a radical shift from fashion trends.The rubber wristband wasn’t just made from any old rubber. Crocco reportedly spent $1 million developing the material to create the perfect blend of durability and style. The result was a watch that felt sportier than its competition but had all the technical makings of a luxury timepiece. Crocco’s risk paid off, with A-list clients from Prince Albert of Monaco to Jay-Z strapping Hublots to their wrists (the latter collaborated with the brand to produce two watches in 2013).In 2004, watchmaker Jean-Claude Biver became CEO of the company, pushing the brand into the 21st century, including through major collaborations with athletes like sprinter Usain Bolt and artists like Shepard Fairey. In 2005, Hublot launched the Big Bang watch, a fresh statement on the brand’s inventive mixing of tradition and technology with options ranging from gold and a tire-tread-like rubber to a sapphire crystal casing. Other models include the Classic Fusion in 2008, which recalls the 1980s design, and the Manufacture Pieces (MP) collection, which features complex movements. The luxury Swiss watch company continues to innovate, all the while staying true to its “art of fusion” roots.Find a collection of Hublot watches and other jewelry on 1stDibs. 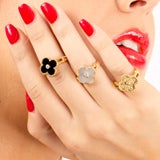 About the Seller
4.9 / 5
Located in Southampton, PA

Over more than 15 years, this seller has built a solid reputation as a trusted purveyor of new, estate, antique and vintage jewelry and watches to a global clientele. In addition to offering an impressive selection of pieces by brands like Bulgari, Cartier and Audemars Piguet, it prides itself on being able to source hard-to-find items...

Recognized Seller
These prestigious sellers are industry leaders and represent the highest echelon for item quality and design.
Diamond Seller
These expertly vetted sellers are 1stDibs' most experienced sellers and are rated highest by our customers.
Established in 2001
1stDibs seller since 2014
1,722 sales on 1stDibs
Typical response time: 4 hours

$9,894
Free Shipping
DeWitt Classic Lady Watch
By Dewitt
Located in Southampton, PA
The DeWitt Classic Lady watch is presented with an 18K rose gold case that boasts a diamond-set bezel and transparent back. The case is mounted onto a blue leather strap fitted with ...
Category