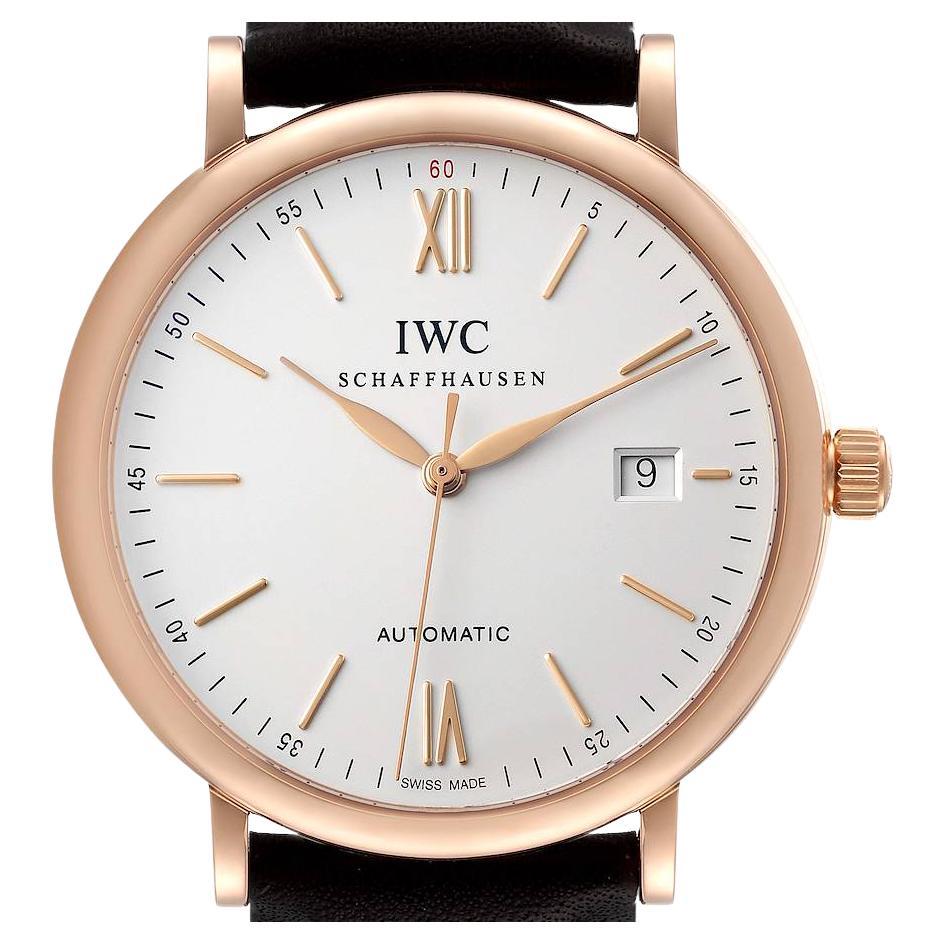 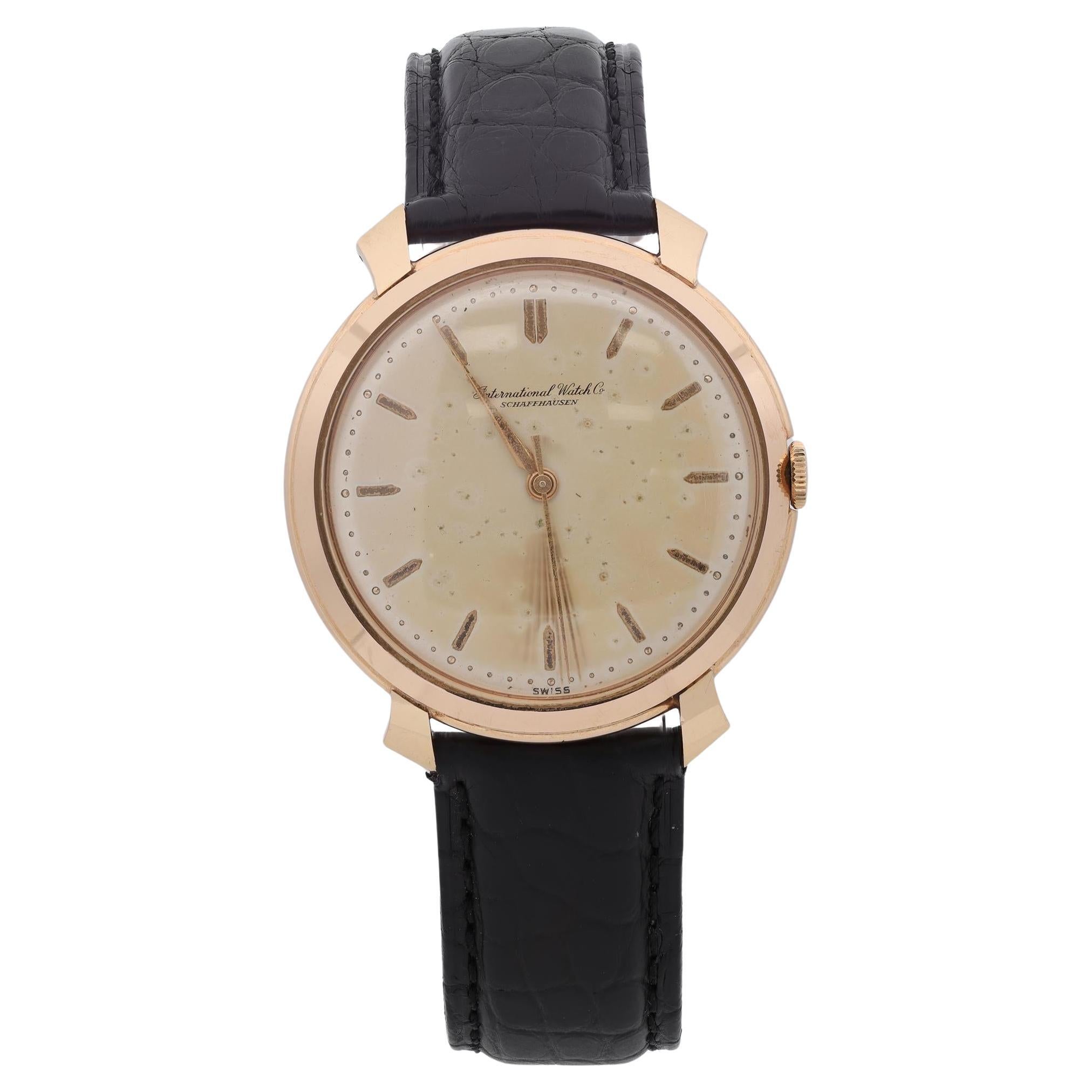 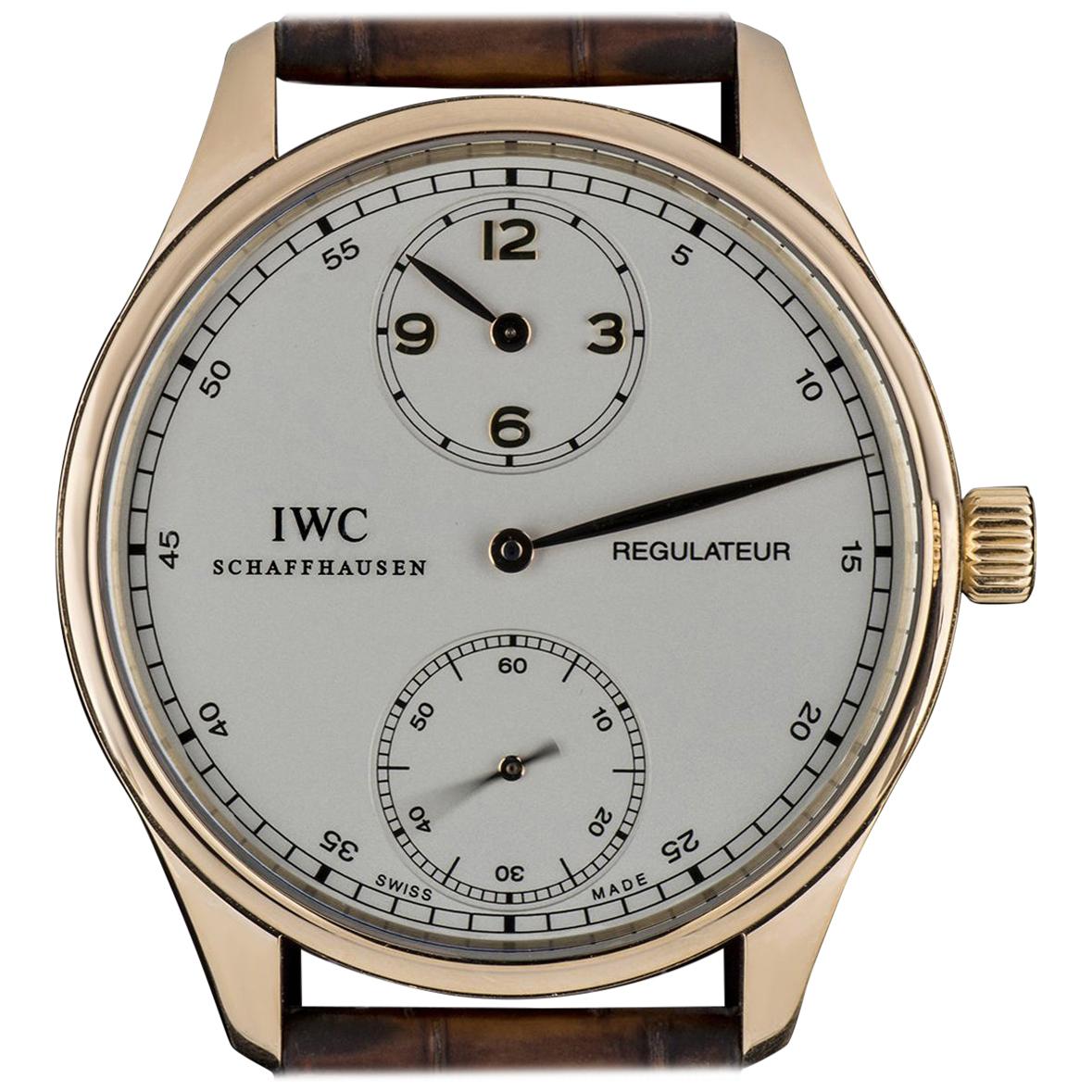 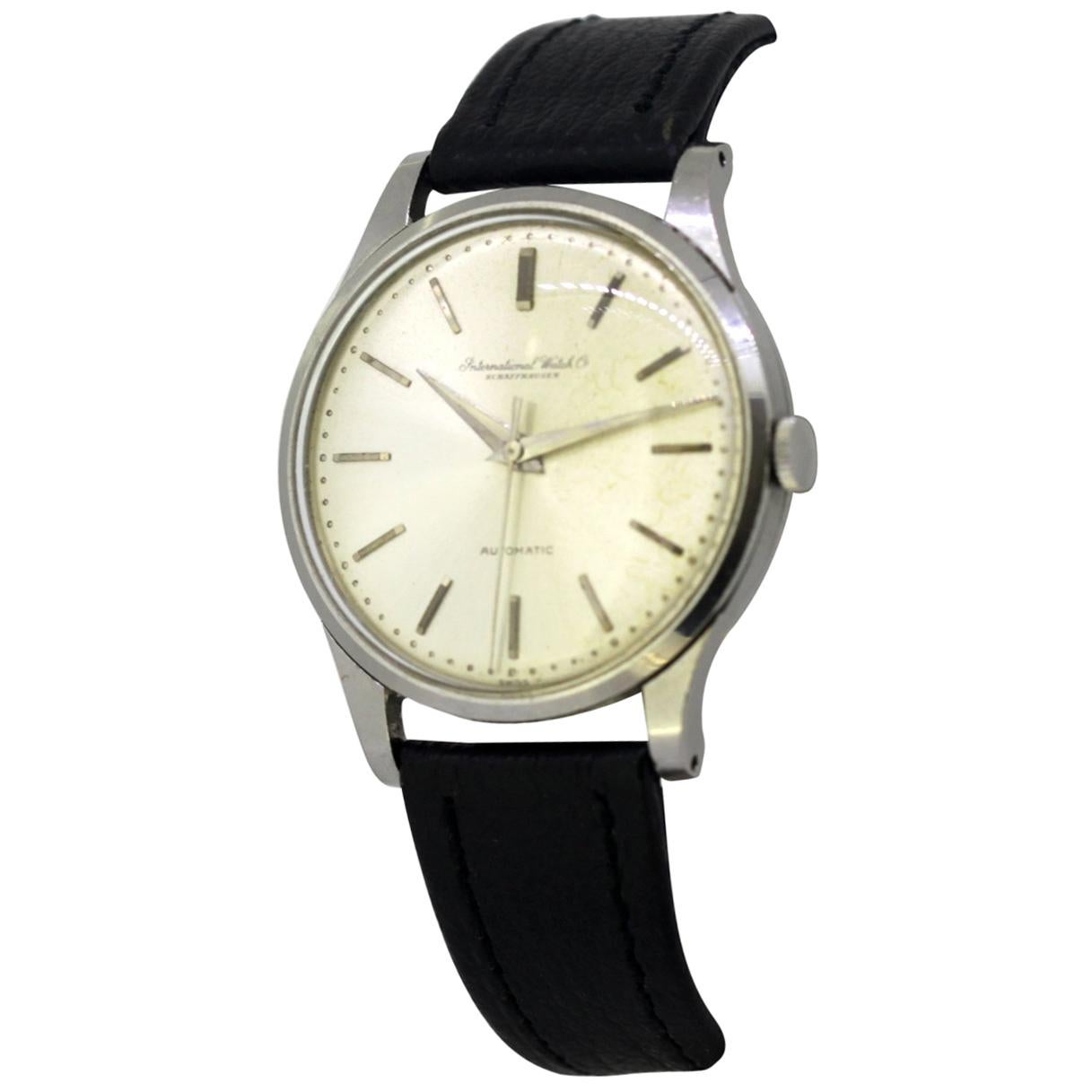 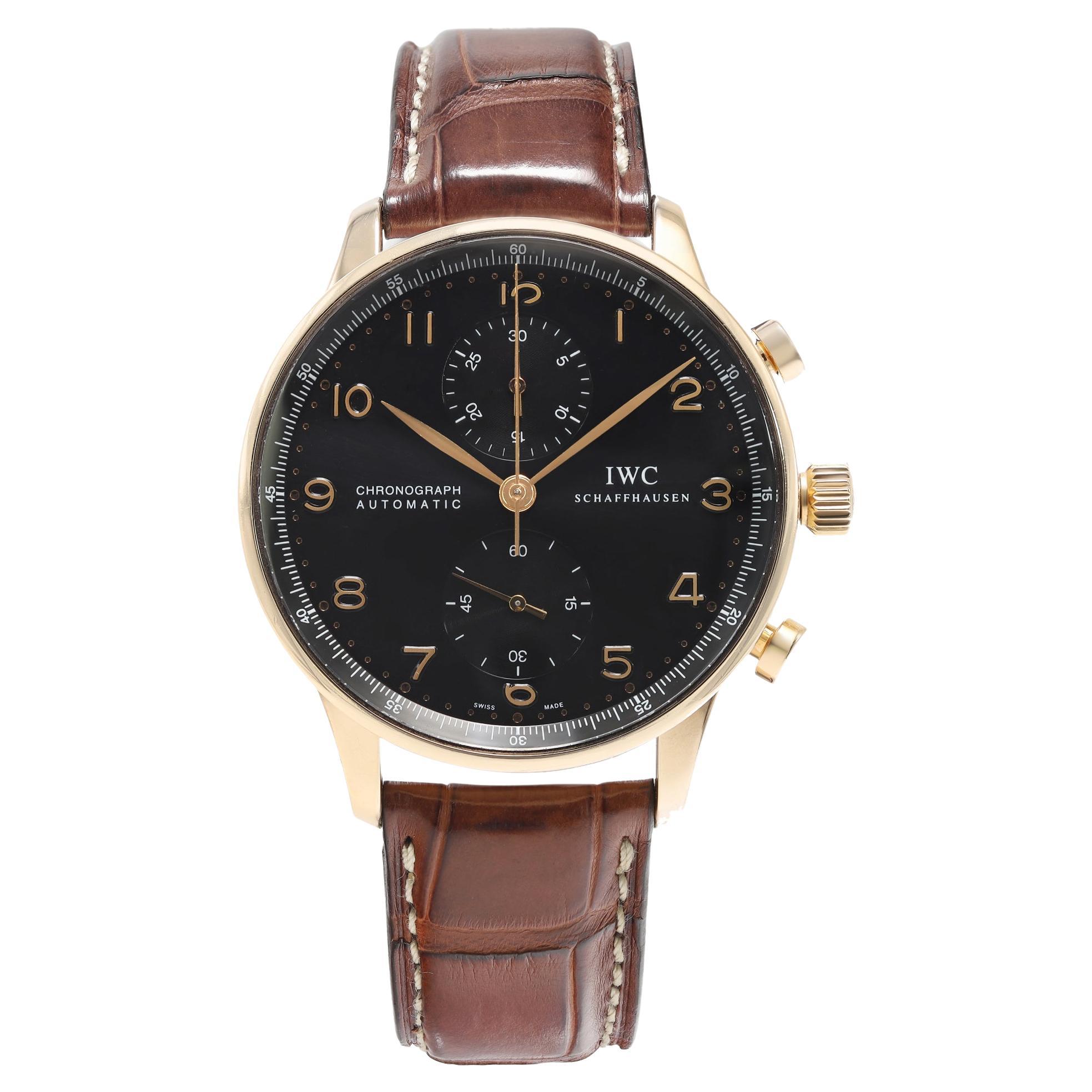 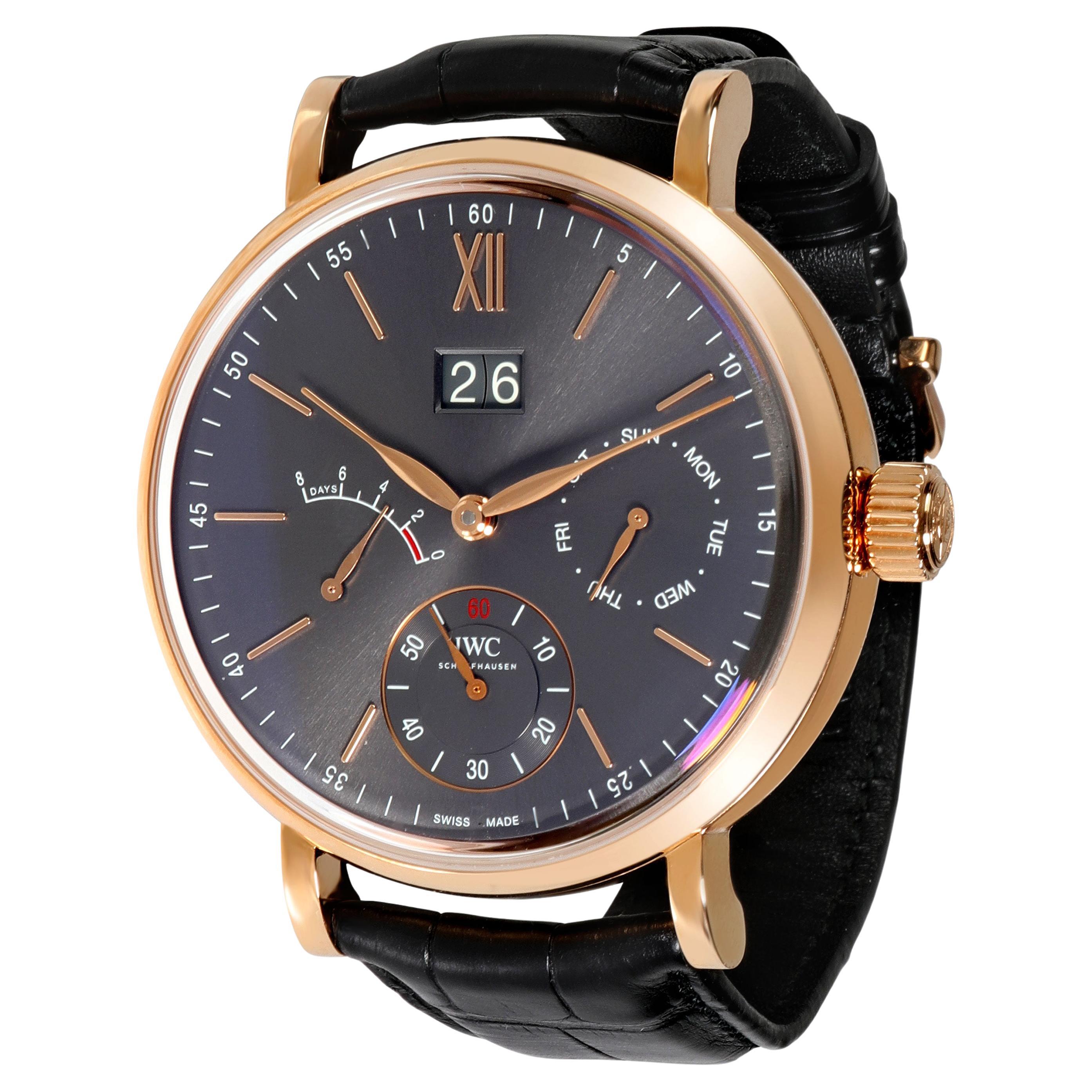 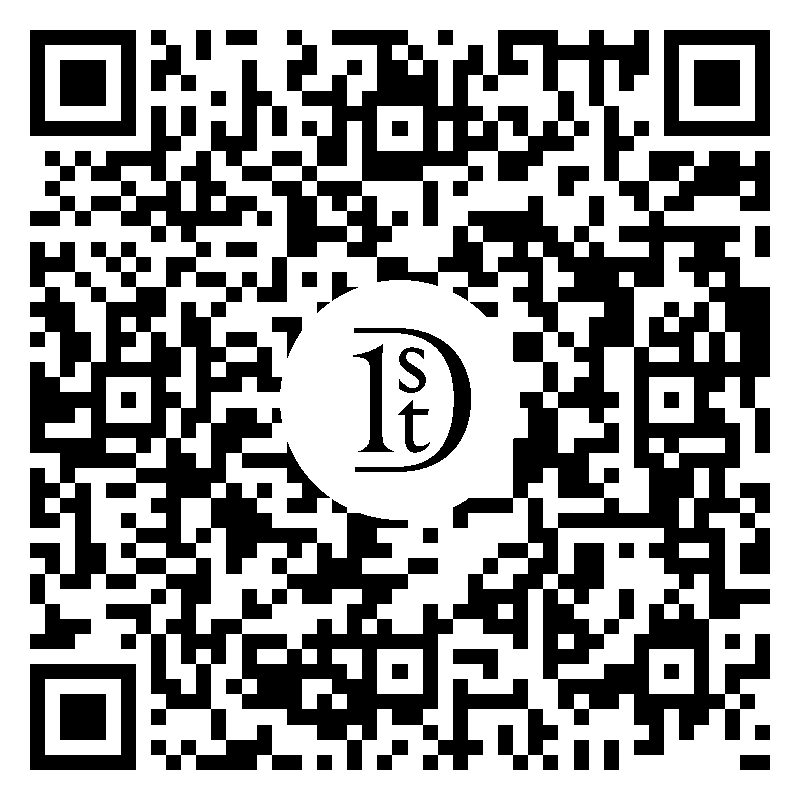 A 37 mm 18k Rose Gold Vintage Men's Wristwatch from the 1980s, silver dial with applied arabic numbers 3, 6, 9 and index batons, a fixed 18k rose gold stepped bezel, a brand new brown leather strap (not by IWC) with an original gold plated pin buckle, plastic glass, manual wind movement, in excellent condition, comes with a presentation box, our own certificate of authenticity and our own one year warranty. 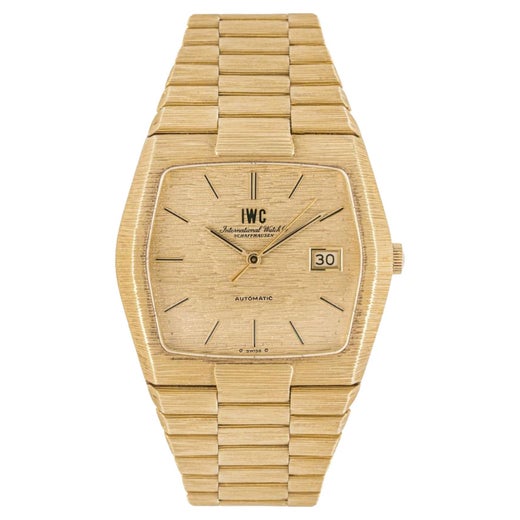 One of Switzerland’s major luxury watch companies was started by an American who saw the potential of bringing Switzerland’s superb watchmaking into the modern age through industrialized manufacturing and high-precision interchangeable parts. The New Hampshire–born watchmaker Florentine Ariosto Jones (1841–1916), who founded International Watch Company — known today as simply IWC — in 1868, was interested in “combining all the excellence of the American system of mechanism with the more skillful hand labor of the Swiss.”

Setting up the company with another American watchmaker, Charles Kidder, in Schaffhausen, Switzerland, Jones used hydropower from the River Rhine for his plant’s machinery. Rethinking watch design would lead to one of IWC’s early successes: the Pallweber pocket watch. Based on an 1883 patent by Austrian watchmaker Josef Pallweber, the watch employed numbered disks for jumping hour and minute displays, making it a pioneer in digital timekeeping.

After Johann Rauschenbach-Vogel took over the watch manufacturer in 1880, four generations of his family led IWC into the 20th century. In 1905, Ernst Jakob Homberger and his brother-in-law Carl Jung — the famed Swiss psychiatrist — acquired IWC. Homberger bought out Jung’s holdings in 1929, and in the 1930s, the company introduced pilot watches, which were particularly robust and aimed solely at the civil aviation industry. These durable wristwatches were designed specifically to remain operational during extreme temperature shifts. (As blue watch dials are particularly hot right now, IWC's blue-dial Big Pilot is having a moment.)

The company still operates alongside the river where it was founded, having gained an international reputation over the past 150 years for its elegant designs and expert craftsmanship. Vintage IWC watches are prized by collectors — of whom there are many these days — and while the company continues to guard its attention to detail and quality, it has pushed its classic designs forward with modern innovation intended to stand the test of time.

IWC’s 2013 Ingenieur watch collection, with its precision based on an inventive constant-force mechanism, looked back to a 1955 Ingenieur model that featured a durable soft-iron inner cage as well as a 1976 update by leading Swiss watch designer Gérald Genta that encased its mechanism in a sleek steel case. IWC has also had a recent push toward sustainability, designing watches that are made to last a lifetime and beyond and earning the highest environmental ranking of any Swiss watch company in a 2018 report published by the World Wide Fund for Nature Switzerland (WWF).

1stDibs Buyer Protection Guaranteed
If your item arrives not as described, we’ll work with you and the seller to make it right. Learn More
About the Seller
4.8
Located in London, United Kingdom
Recognized Seller
These prestigious sellers are industry leaders and represent the highest echelon for item quality and design.
Gold Seller
These expertly vetted sellers are highly rated and consistently exceed customer expectations.
Established in 2012
1stDibs seller since 2016
65 sales on 1stDibs
Typical response time: 10 hours
More From This SellerView All
People Also Browsed
You May Also Like