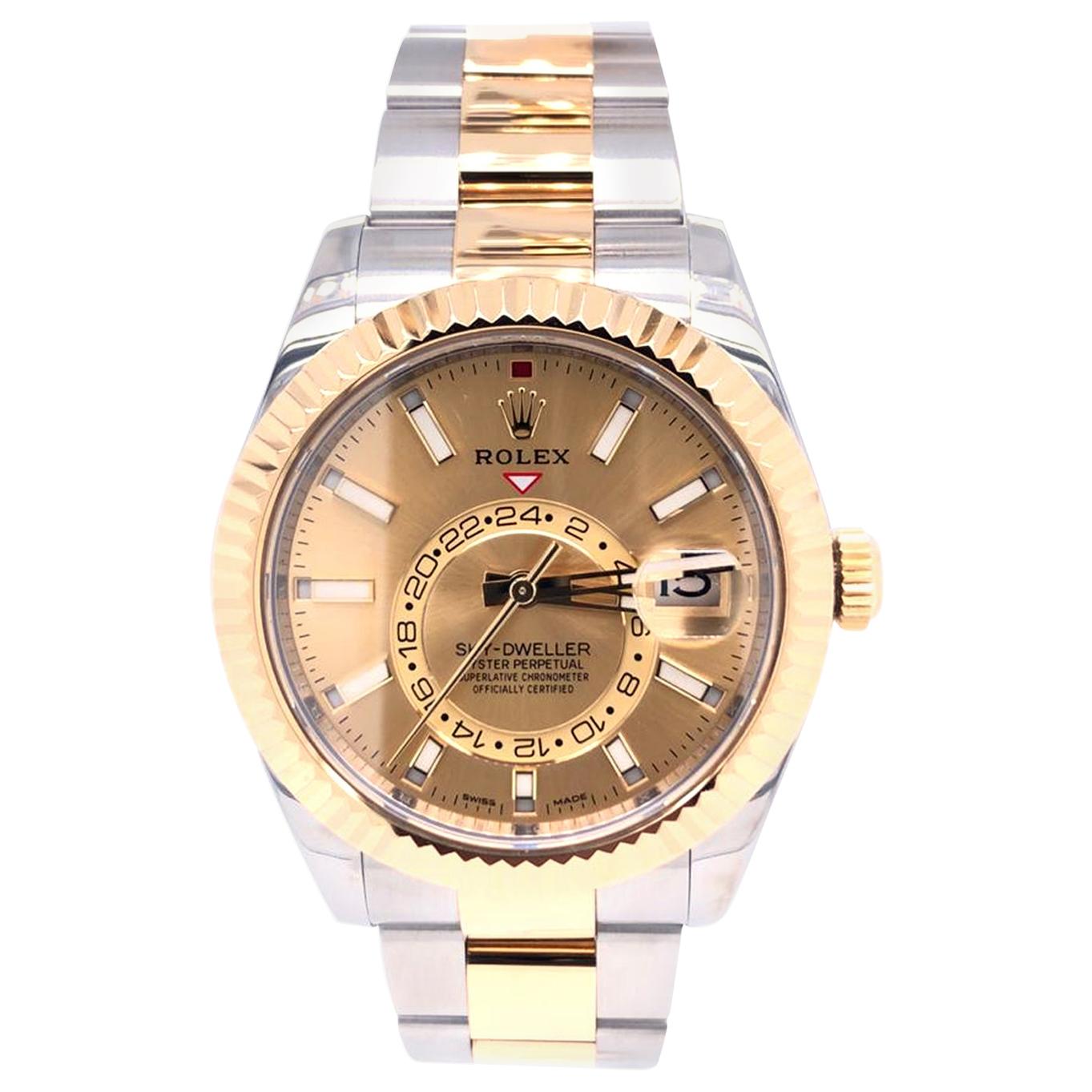 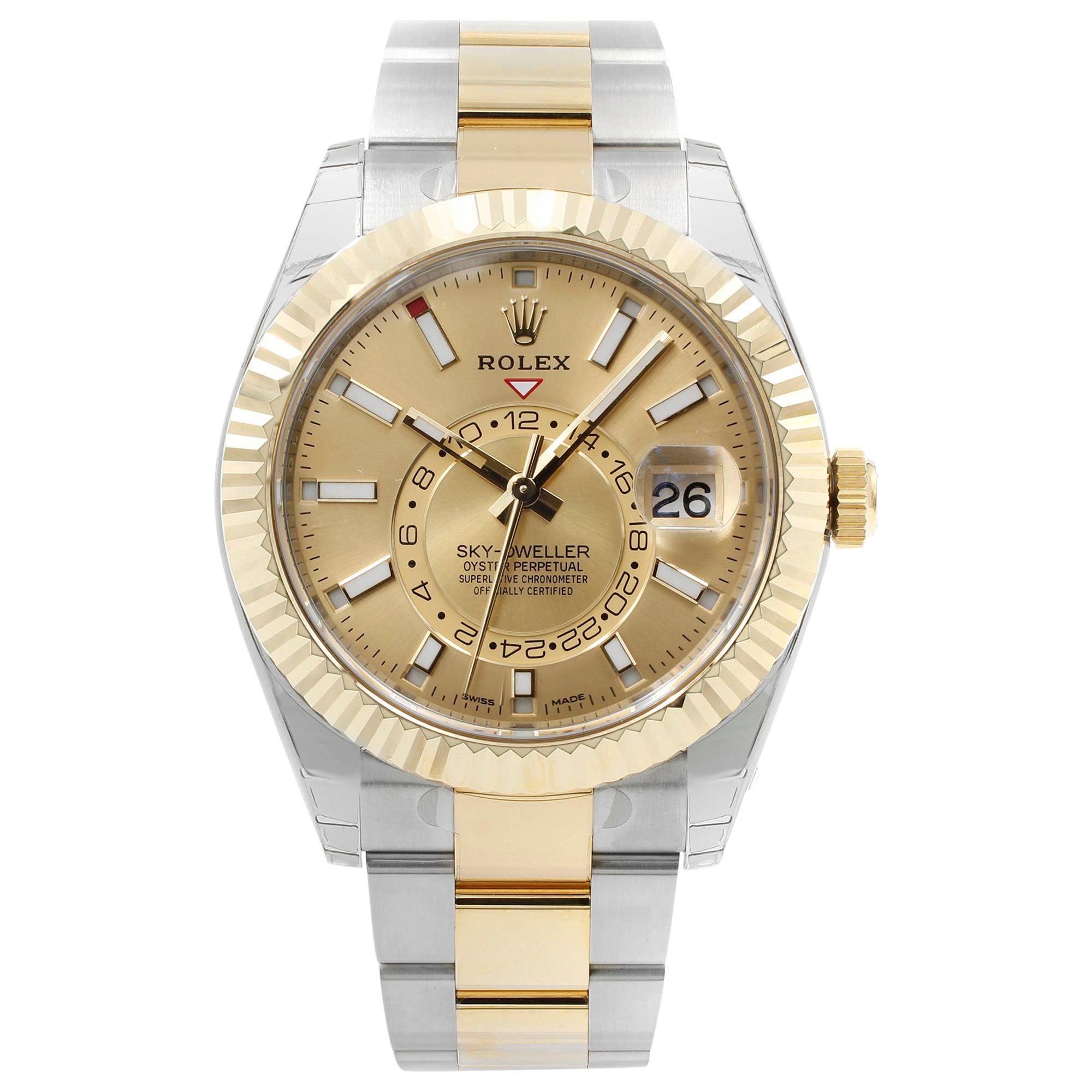 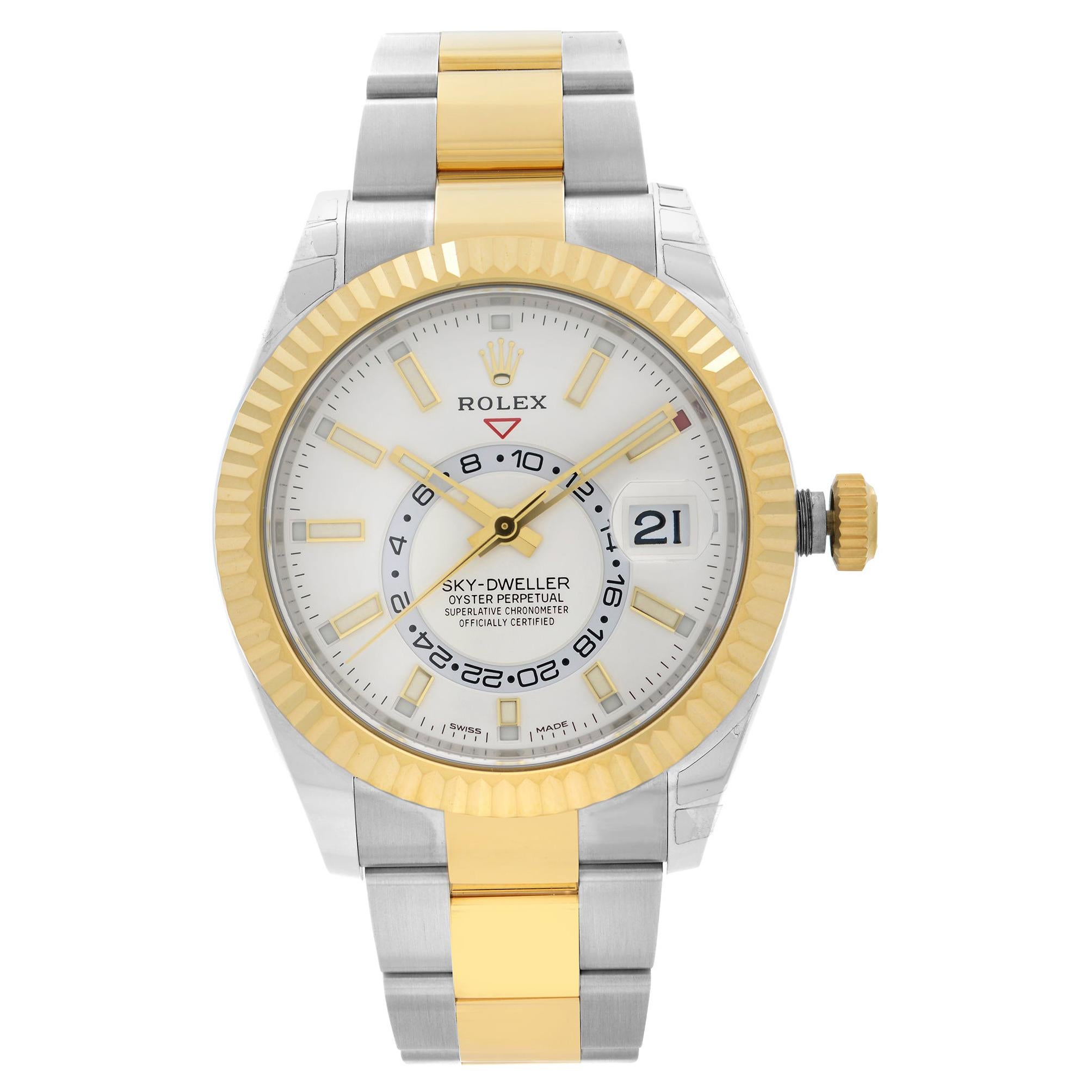 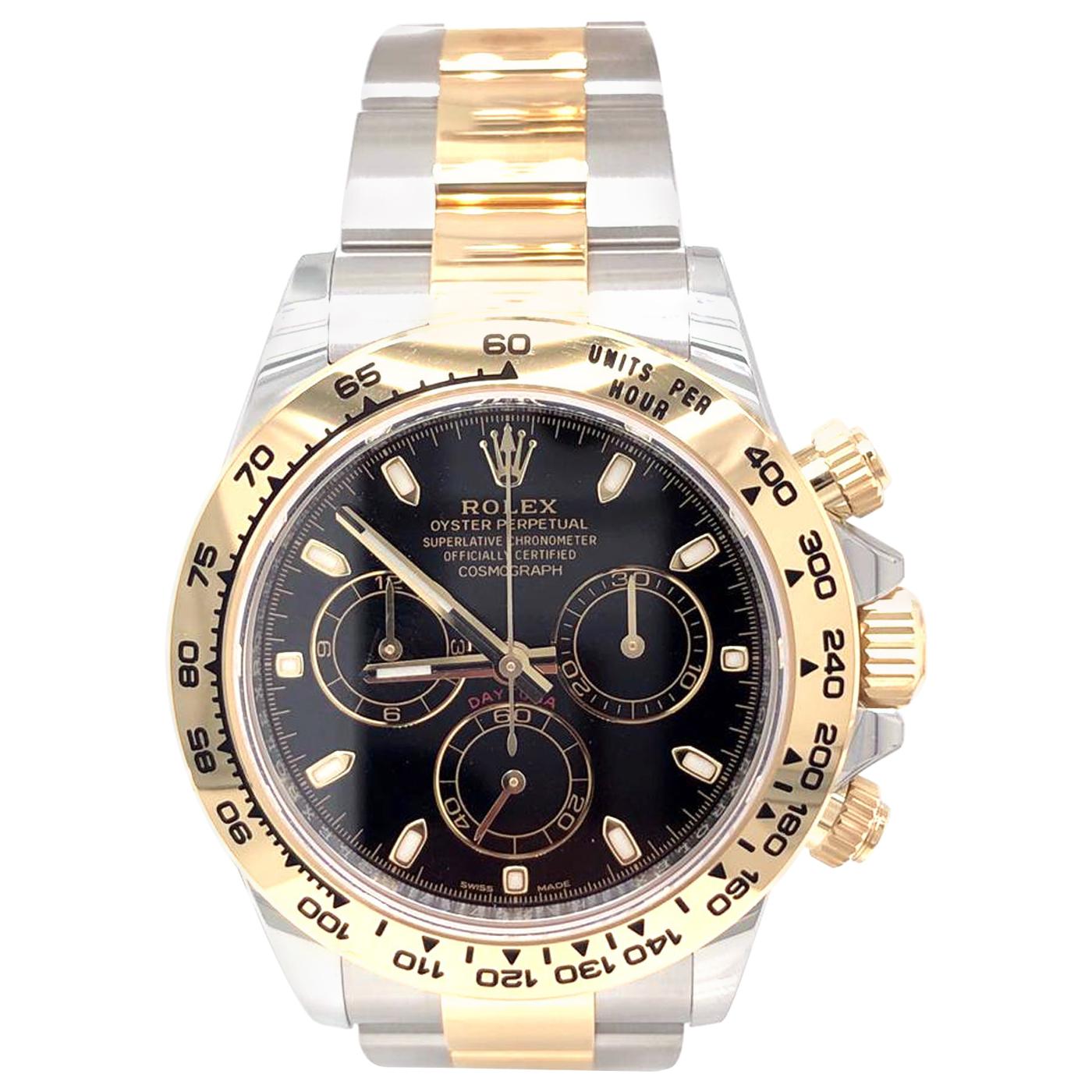 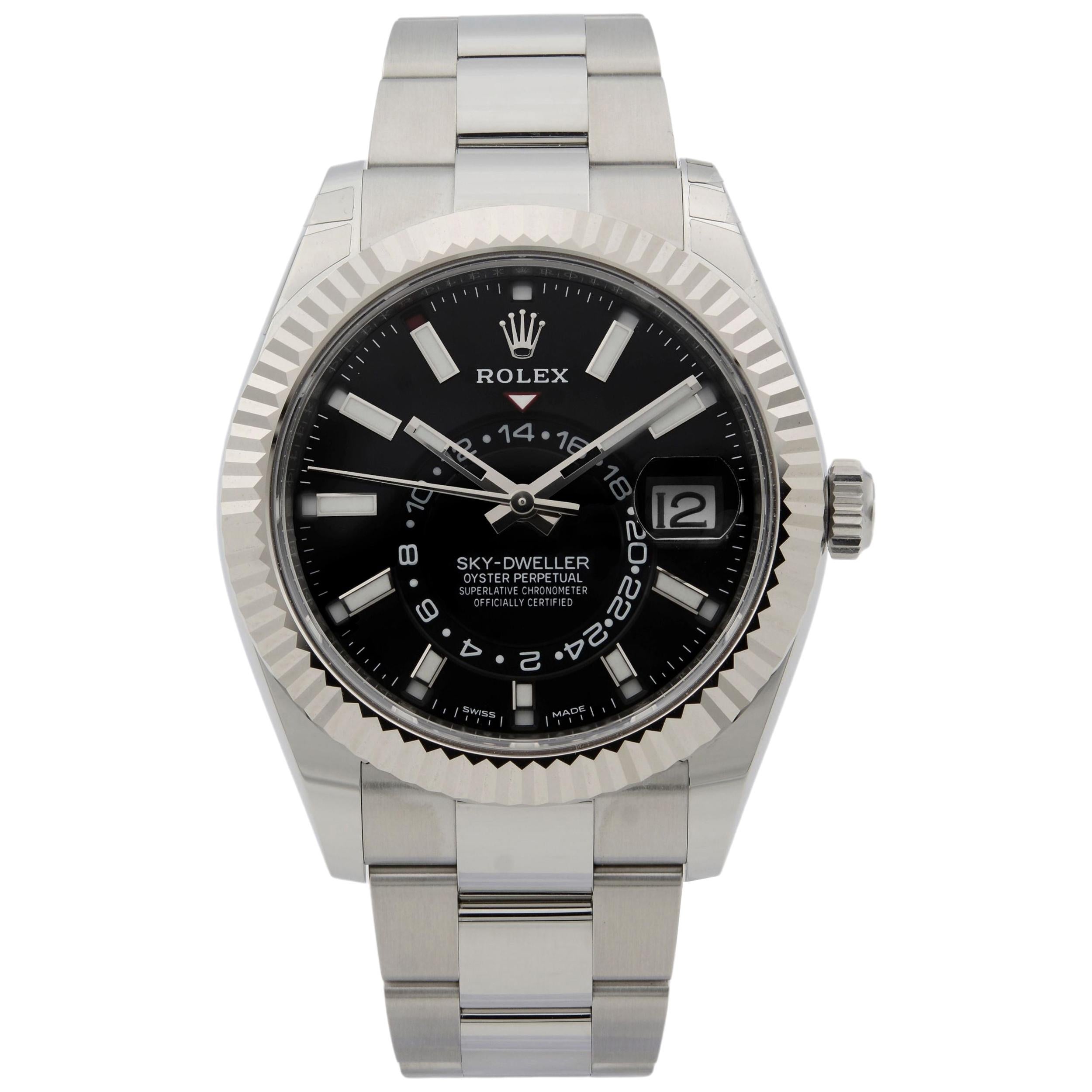 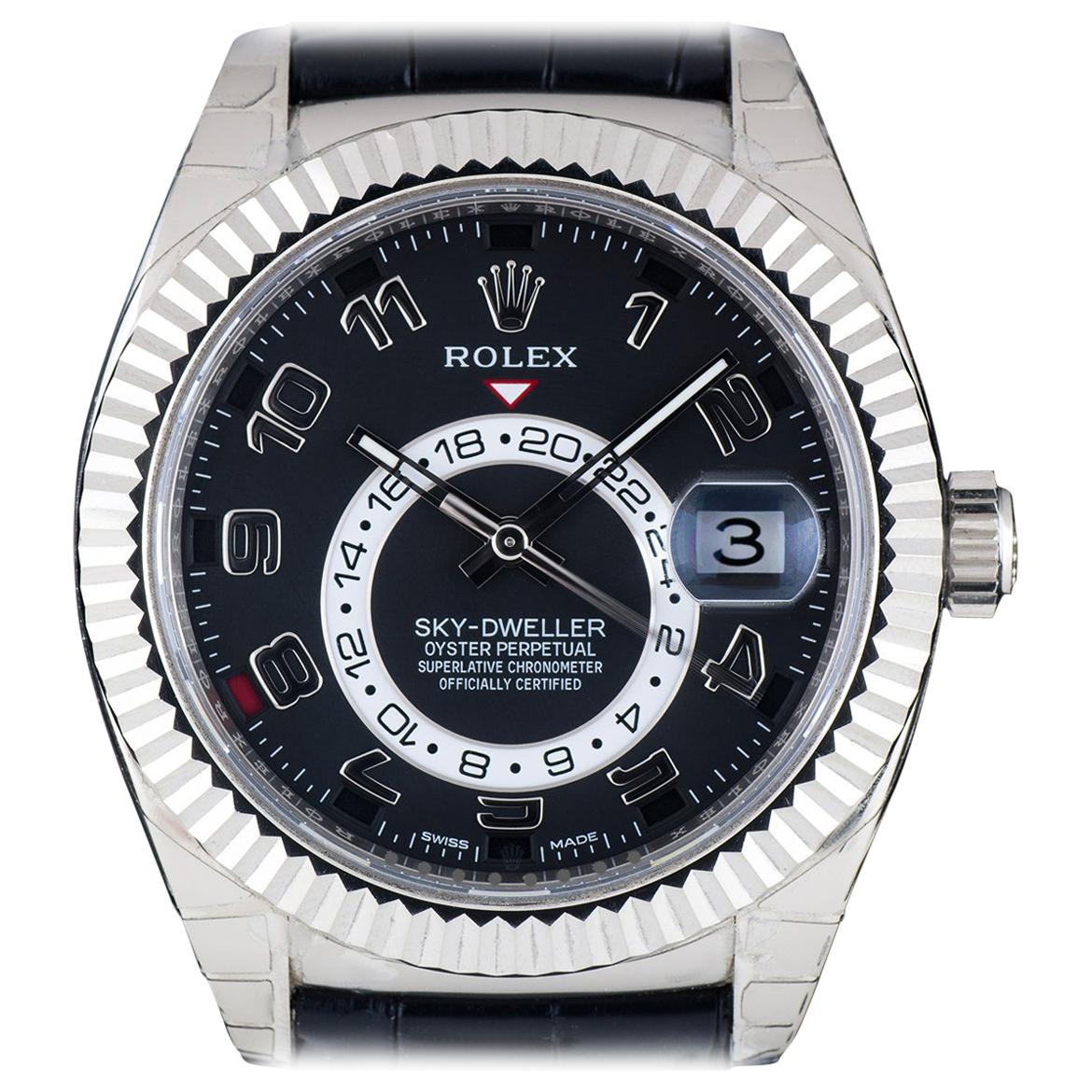 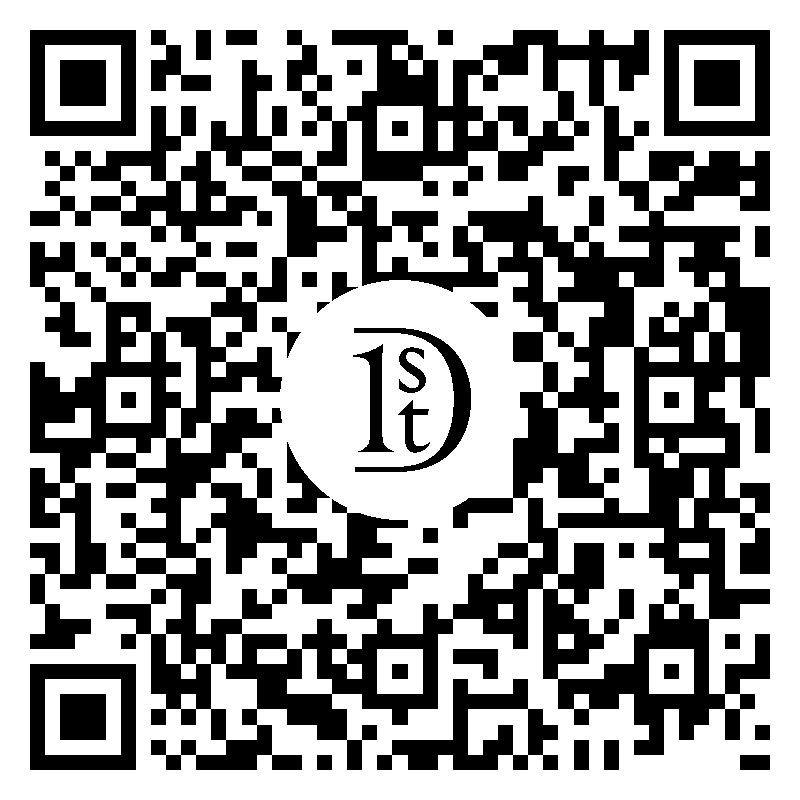 The Oyster Perpetual Sky-Dweller in Oystersteel and yellow gold with a Black dial and an Oyster bracelet. This distinctive watch is characterized by its second-time zone display on an off-center disc on the dial. Furthermore, its innovative system for setting the functions, using the rotatable Ring Command bezel, is unique to Rolex. The Rolex fluted bezel is a mark of distinction. Originally, the fluting of the Oyster bezel had a functional purpose: it served to screw the bezel onto the case helping to ensure the waterproofness of the watch, The Sky-Dweller is fitted on a solid-link Oyster bracelet in Oystersteel, in the case of the white Rolesor version, or, for the yellow Rolesor version, an Oyster bracelet combining Oystersteel and 18 ct yellow gold. Details: Brand: Rolex Model: Sky-Dweller Reference number: 326933 Movement: Automatic Case Material: Gold/Steel Bracelet material: Gold/Steel Year of production: 2021 Condition: New (Brand new, without any signs of wear) Scope of delivery: Original box, no original papers Gender: Men's watch/Unisex Location: United States of America Movement: Automatic Movement/Caliber: 9001 Base caliber: 3135 Power reserve: 72 h Number of jewels: 40 Case Material: Gold/Steel Case diameter: 42 mm Water resistance: 10 ATM Bezel Material: Yellow gold Crystal: Sapphire crystal Dial: Black Dial numerals: No numerals Bracelet material: Gold/Steel Bracelet color: Gold/Steel Clasp: Fold clasp Clasp material: Gold/Steel *The picture used for this listing is Real Pictures, Kindly contact us if you require additional pictures of this model. Serious Inquiries Only. All of the watches we sell are authentic. Our timepieces are guaranteed authentic. Every one of our timepieces is carefully inspected, tested for accuracy, meticulously detailed, serviced (if needed), Conservatively graded, and photographed in-house. Please contact us directly if you have any additional questions. Cashingdiamonds 13059341318 About us: Cashingdiamonds is not an authorized dealer or licensor of any of the products we sell. We do not claim any rights to the trademarks, copyrights, patents, or any other intellectual property subsisting in the Products, which belong solely to their developers or assignees and licensees. We obtain our Products from reputable sources who deal directly with authorized dealers and distributors, and who have certified that they have authority to resell the Products to us for resale to you. Our experts check the authenticity of each Product. 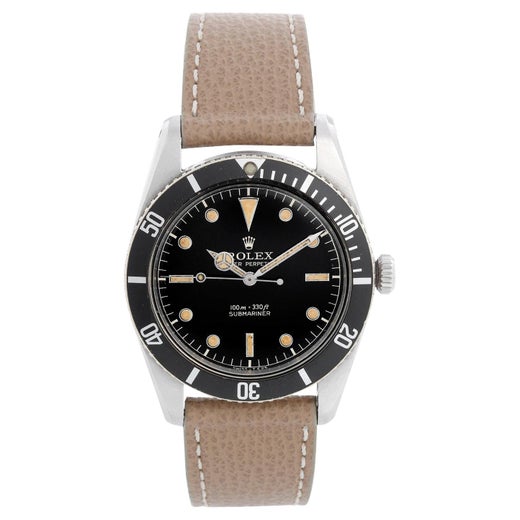 Ask anyone, anywhere, to name a luxury watch brand, and the answer will probably be “Rolex.” This enviable worldwide recognition can be credited in part to the genius of company founder Hans Wilsdorf. When the German-born watch dealer and his brother-in-law, Alfred Davis, set up their London enterprise, in 1905, they called it Wilsdorf & Davis, according to the traditional formula.But Wilsdorf was determined to come up with another name that was short, would look good on a watch dial and was easy to say and remember in several languages. In 1908, he trademarked the name Rolex, and by 1920, he had moved the company to Geneva and redubbed it as Montres Rolex S.A.But the main reasons for the brand’s success are its commitment to precision and unflagging pursuit of innovation. In 1926, the company introduced the aptly named Oyster model. With a screw-down crown and case back, both fitted with rubber gaskets, this was the first truly waterproof watch.Five years later, Rolex upped the ante with the Oyster Perpetual. That model’s patented Perpetual movement contained a rotor mechanism enabling it to self-wind. In another trendsetting move, in 1945, the brand debuted the Datejust, with a date window prominently displayed on the dial.The company’s two most iconic models are sports watches. Although the Submariner, which debuted in 1953, was developed as a dive watch, its waterproof case, solid construction and good looks made it a favorite of adventurers and urbanites alike, including James Bond, who wore it in classics like Dr. No and Goldfinger. The Daytona, the racing chronograph made famous by Paul Newman, is especially sought after by collectors. Newman’s personal Daytona, which hit the auction block in 2017, sold for $17.8 million.Find vintage and contemporary Rolex watches, bracelets and more on 1stDibs.
About the Seller
5 / 5
Located in Aventura, FL
Vetted Seller
These experienced sellers undergo a comprehensive evaluation by our team of in-house experts.
Established in 2011
1stDibs seller since 2019
14 sales on 1stDibs
Typical response time: <1 hour
More From This Seller

Rolex Sky-Dweller Champagne Dial Steel Yellow Gold Automatic Men''s Watch 326933
By Rolex
Located in New York, NY
This brand new Rolex Sky-Dweller 326933 is a beautiful men's timepiece that is powered by an automatic movement which is cased in a stainless steel case. It has a round shape face, ...
Category

$25,449
Free Shipping
Rolex Sky-Dweller Gold Steel Black Dial Oyster Band Automatic Men's Watch 326934
By Rolex
Located in New York, NY
This brand new Rolex Sky-Dweller 326934 is a beautiful men's timepiece that is powered by mechanical (automatic) movement which is cased in a stainless steel case. It has a round sha...
Category

$6,800 / item
Free Shipping
Rolex Sea-Dweller Steel Black Dial Automatic Men's Watch 16600
By Rolex
Located in New York, NY
This pre-owned Rolex Sea-Dweller 16600 is a beautiful men's timepiece that is powered by mechanical (automatic) movement which is cased in a stainless steel case. It has a round shap...
Category

How To Spot a Fake Rolex: 13+ Expert Tips

Learn the devious techniques that counterfeiters use to sell inauthentic pieces at authentic prices. Of course, you don't have to worry about this on 1stDibs, where every Rolex is highly vetted.