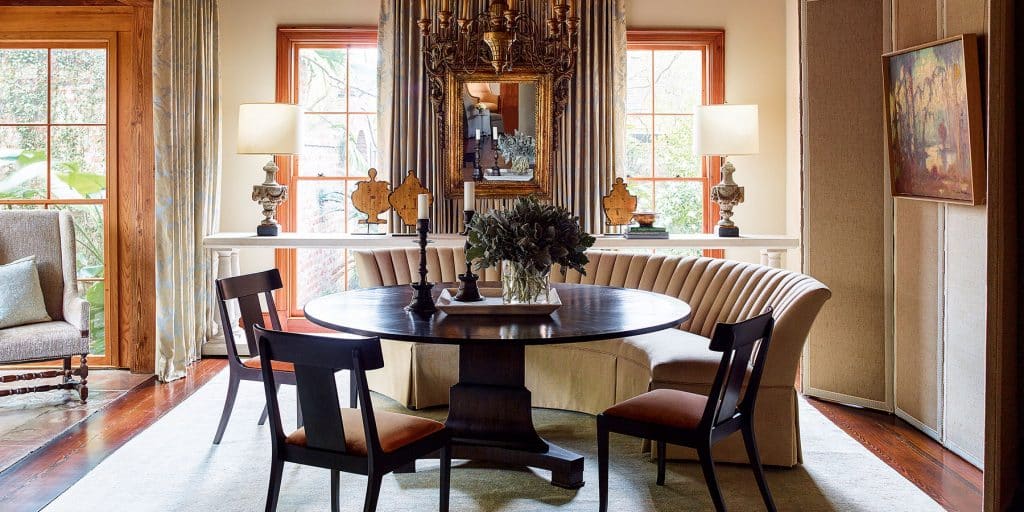 The longtime McAlpine partner strives to create meaningful, inviting spaces for his clients. 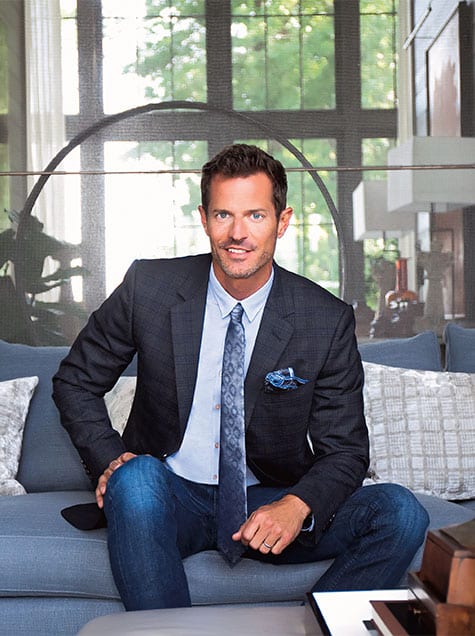 May 13, 2018Ray Booth is a partner in the design and architecture firm McAlpine, where he started as an intern in college (portrait by Juan Pont Lezica). Top: “I love to layer different types of function into a dining room,”Booth writes in his new monograph. This is evidenced in his frequent combination of banquettes with other types of seating (photo by Eric Piasecki).

It was his first-ever trip to Japan, but as interior designer Ray Booth toured Kyoto’s moss gardens and Zen Buddhist temples in March, he says, “I felt somehow strangely at home.” A partner for nearly two decades in McAlpine, a renowned architecture and design firm headquartered in Montgomery, Alabama, and Nashville, with satellite offices in Atlanta and New York, Booth says, “I’ve always felt a kinship with the simplicity and meaningfulness of Japanese architecture” — qualities that are also evident in the pages of Ray Booth: Evocative Interiors, his debut monograph, from Rizzoli.

In Booth-designed residences from Austin, Texas, to the Hamptons, certain qualities stand out, like a serenity born of a neutral palette, with controlled daubs of color borrowed from the local landscape forging a direct connection with nature. There’s also the monumentality of the architecture and of the bold, large-scale pieces within, plus a decisive clarity in inviting rooms that are pared-down without being minimalist. “That’s where you get back to the Zen,” Booth says. “I love layers, but I don’t like excess. I strive for clarity in all aspects of life, not only in design.”

Booth has certainly been clear from the get-go about his career path. As a young child, the Huntsville, Alabama, native stole graph paper from his aerospace engineer father and drew houses like his own suburban home. “I started drawing houses at age four or five and never stopped,” he says. From his mother, to whom the book is dedicated, the young Booth learned what he calls “the greater truth behind beauty: that it is not just visual, it is emotional.” 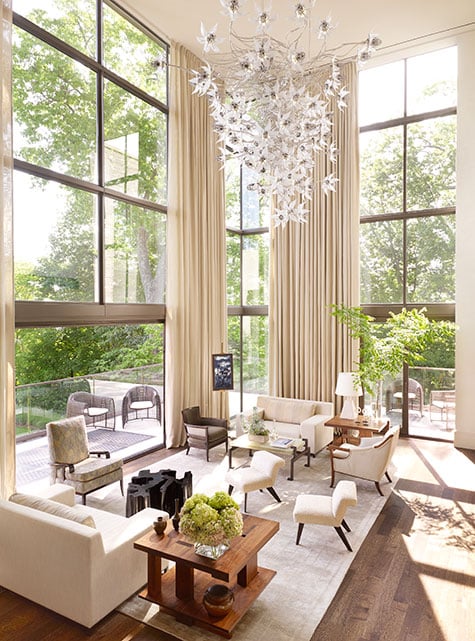 In renovating a Nashville residence for an art-collecting family, Booth writes, he worked with architecture firm DAAD to “open the house up to the views with as much glass as possible.” Here, they removed an upstairs library to create a double-height living room to showcase the homeowners’ U-Ram Choe light sculpture. Photo by Pieter Estersohn

Mother and son enjoyed visiting historic homes together, and he internalized stories of her childhood in rural Georgia, where she grew up in dire poverty. “She had an experience early in life visiting a beautiful antebellum home,” Booth says. “She talks about this extraordinary grand stair and beautiful piano, how they ignited in her an understanding of how much home and beauty matter, and how they are tethered to emotion. What my mom registered was passed on to me.”

Booth’s high school grades and math skills were not terrific, and he was “encouraged to look in other directions,” he says, but his “creative side” drove him to enroll at Auburn University’s College of Architecture, Design and Construction. “Once I arrived,” he recalls, “I was among my people, and I became a straight-A student.”

At Auburn, Booth met a key figure in his life. Bobby McAlpine taught him in a second-year studio, spotted his talent and gave him a summer internship at his then-fledgling firm in Montgomery. But Booth wasn’t planning to remain in Alabama after graduation. In 1989, with three friends, $1,500 and a freshly minted bachelor’s degree in architecture, he moved to New York City. “I had never been to New York, and I didn’t have a job or a place to live, but I had a lead.” The lead was to legendary designer John Saladino, who had worked with McAlpine on a project in Atlanta. Booth interviewed successfully at Saladino’s office and spent the next three and a half years there. “Saladino was my master’s degree,” he says. Booth worked a further four years with Clodagh, a downtown designer with a fashion background who “was a study in creativity and invented her own rules,” he says. “It was all great food for a hungry mind.”

In 1999, just as he was wondering what would come next, Bobby McAlpine offered Booth a partnership back in Alabama. “I found out you can go home again,” he says. “I was reintroduced to the romantic, soulful architecture and interiors McAlpine strives to create.” 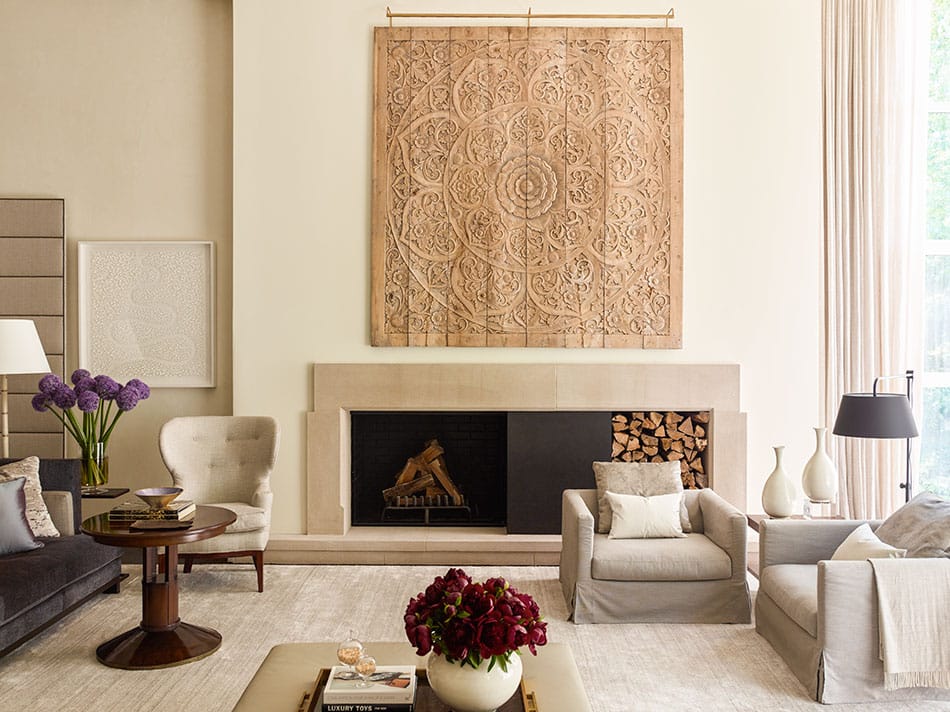 Booth altered the proportions of this living room and added modern materials to make the fireplace a focal point. Photo by Eric Piasecki 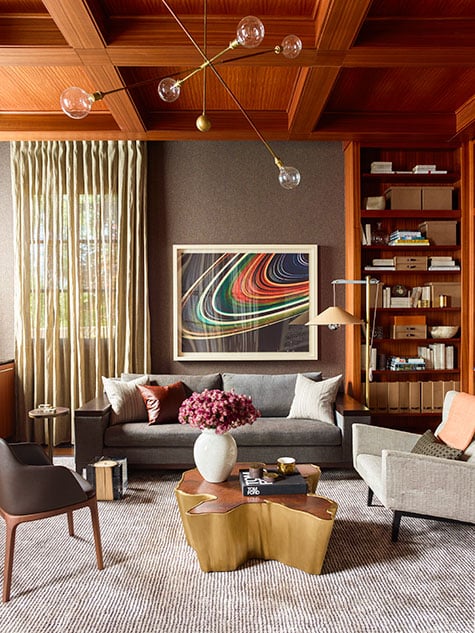 To complement the coffered mahogany ceiling in a Nashville home’s library, Booth chose a palette and materials that matched its depth and richness. Photo by Eric Piasecki

In the years since, Booth has launched a New York outpost of McAlpine; met his now-husband John Shea, a television consultant, in Ibiza, Spain; and designed his first ground-up residence for the two of them. Traveler’s Ridge, dramatically sited on a wooded hilltop, recalls Frank Lloyd Wright and the Prairie School in its robust masonry and wood construction, its spectacular double-height windows affording views of Nashville’s skyline and the Great Smoky Mountains. As with the residences Booth designs for clients, what lies outside the windows informed the colors of the decor. “The purply blue mountain range was immediately pulled in for the sofas,” he says. “The silver and white of the clouds became carpets and chairs and pillows. It’s about bearing witness to what is around you.”

Most of the projects in Evocative Interiors contain some antiques as foils to the muscular contemporary upholstered pieces, many from Italian companies like Minotti and B&B Italia. “I like the generosity of European-scaled upholstery. It’s the big, quiet guy in the room, allowing the beautiful antique chair to have its moment.” Of the dichotomy between old and new, Booth says, “We don’t exist in a history vacuum. To have an interior that is strictly modern and not play some of these other notes is, to me, very limiting.”

Another thread in all Booth’s rooms is emotion. In wide-ranging conversations with clients before beginning a project, the designer says, “I try to glean a memory of their most peaceful place, perhaps the beach, and use that as a hook for building a color palette. Architecture and interiors should be meaningful, not arbitrary.”

At 51, Booth is at the peak of his creative prowess. He has six new ground-up projects in the works, including a vacation home for Shea and himself in Provincetown, Massachusetts. He also has two new product-licensing deals — one with Hickory Chair for a Ray Booth–branded line of upholstery, case goods and lighting; and another for Arteriors, set to debut at High Point in 2019. So, he has lately been a drawing-and-sketching dynamo. Having to come up with hundreds of new designs “turned on a switch in me,” he says. “My brain has been reactivated on a new level, and I’m really excited about the next chapter.” 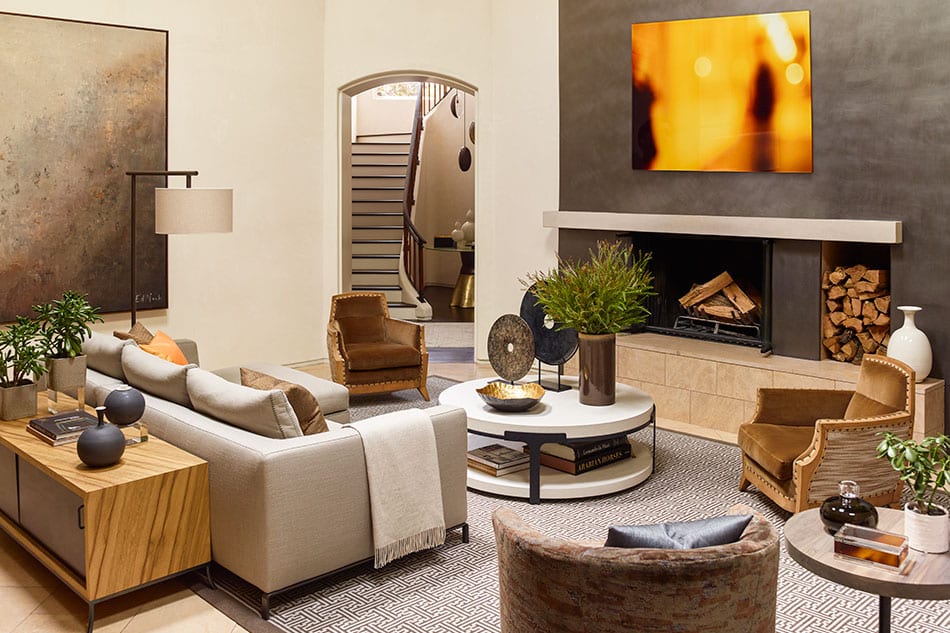 In this Nashville living room, furnishings include a B&B Italia sofa, a Holly Hunt coffee table and a pair of Art Deco armchairs from BK Antiques. A painting by Nashville-based artist Ed Nash hangs over the fireplace. All photos in this slideshow by Eric Piasecki 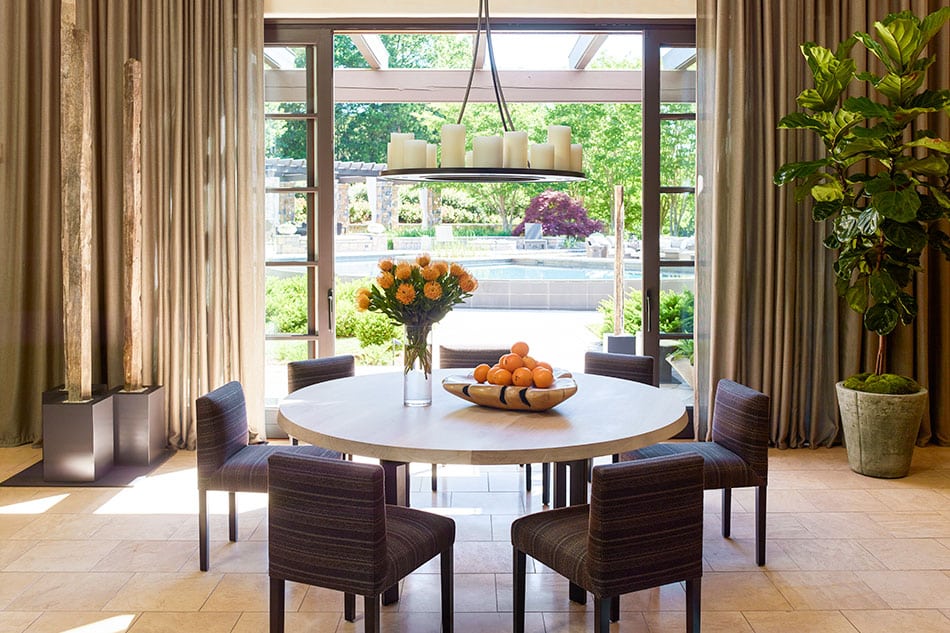 The keeping room features a bleached-walnut dining table by Thomas Hayes Studio surrounded by Nell dining chairs from Room. To the left of the sliding doors is a trio of ancient stone pillars with custom bases. 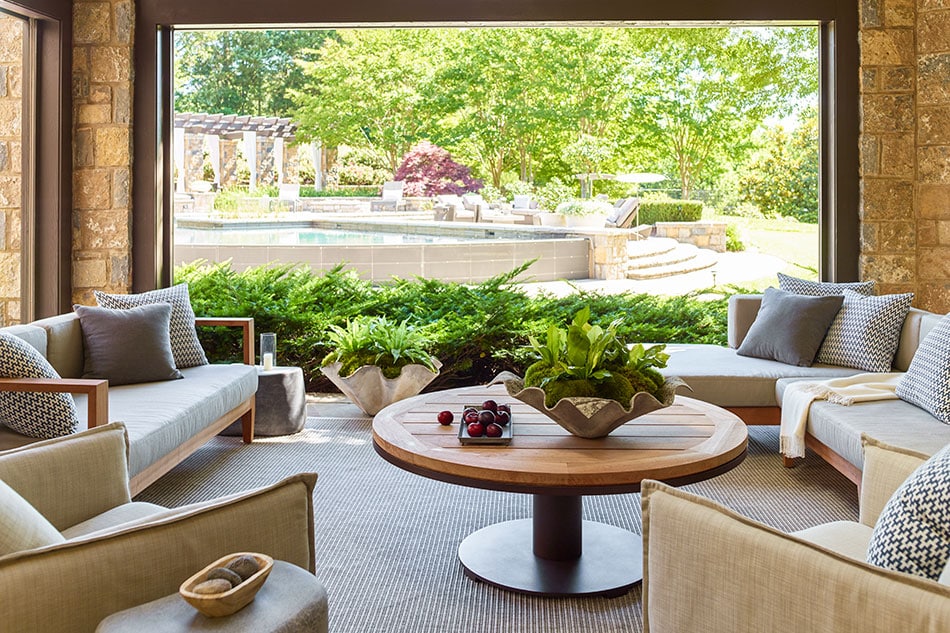 This indoor-outdoor space, whose furnishings include a teak-topped coffee table and Lee Industries swivel chairs, frames a view of the stunning backyard. 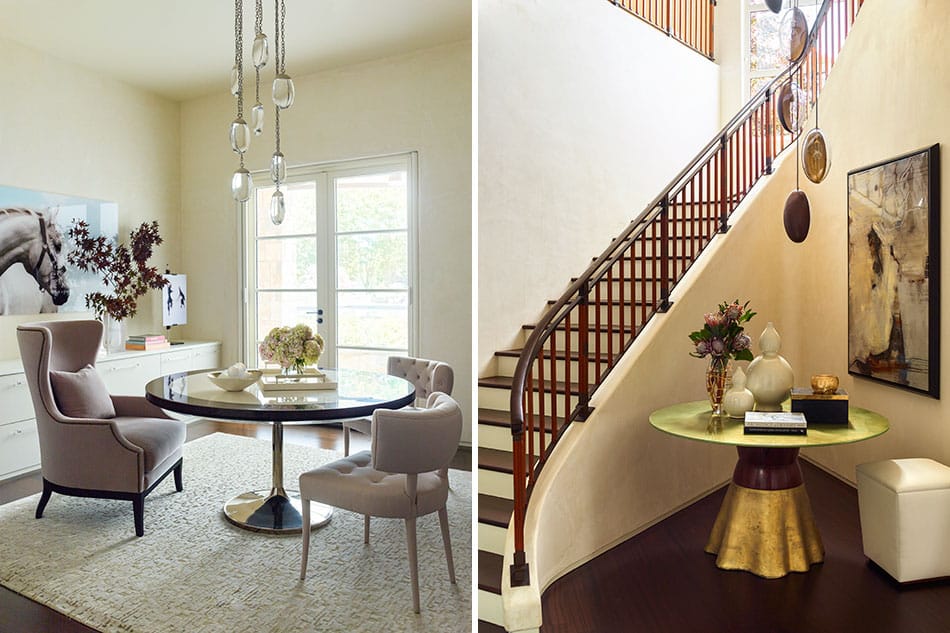 Left: The wife’s office includes a Lorin Marsh dining table surrounded by Carlyle Collective chairs on a rug by Marc Philips. Right: The entryway contains a Constantini Design center table with a bronze base and gold-leaf top, plus a Lake + Wells Oona light fixture. 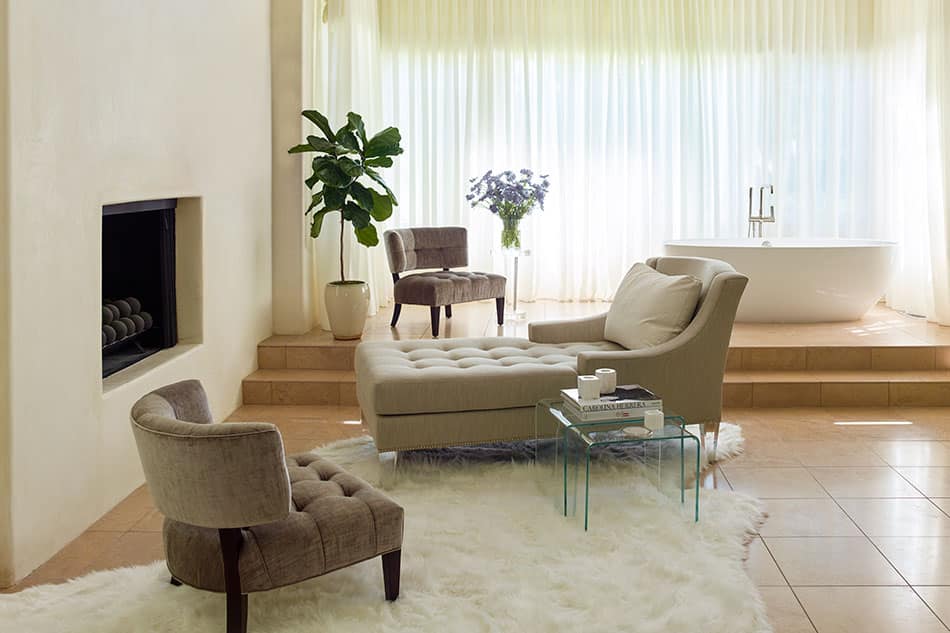 This lounge-like bathroom features a freestanding tub along with a pair of slipper chairs and a chaise longue in front of the fireplace. 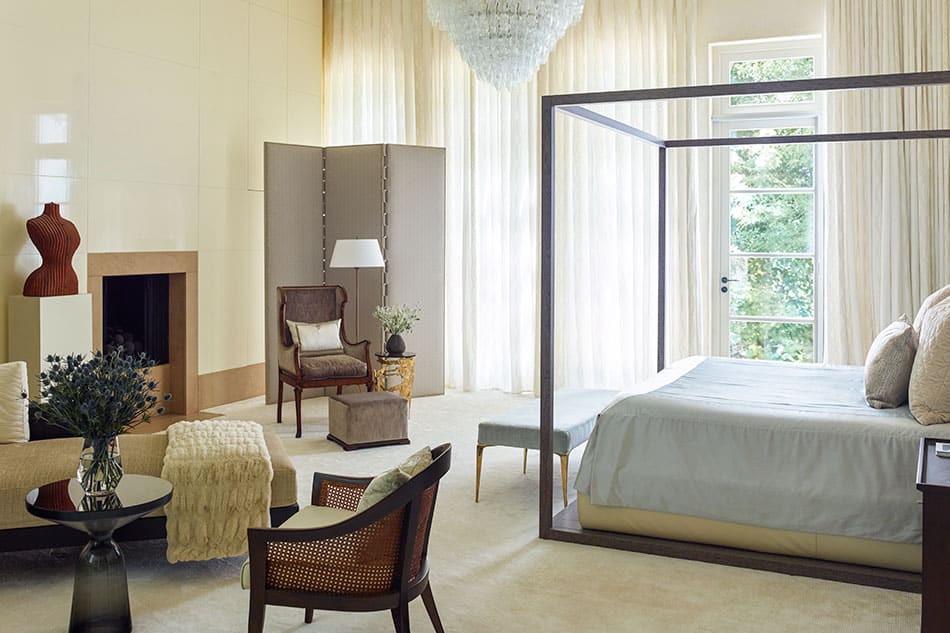 A Murano glass chandelier from Michel Contessa Antiques and More hangs over this bedroom, which includes a B&B Italia Alcova bed, a Stiletto bench from CF Modern and Harvey Probber chairs from Objects20C. 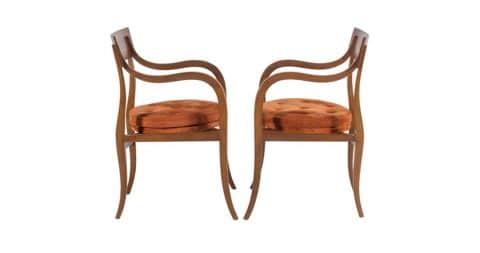 “These chairs are beautiful from all angles and in any setting.” 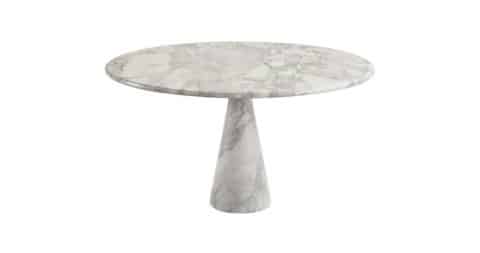 “I appreciate his pieces for their pure expression of materials. The scale works well in many settings and can integrate well into modern or more classic interiors.” 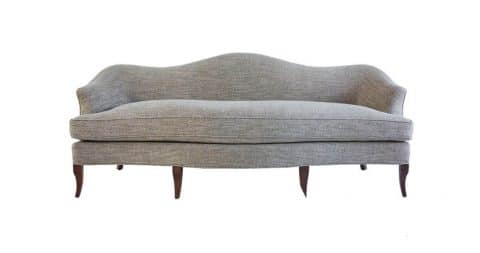 “I chose this for its gracious silhouette.” 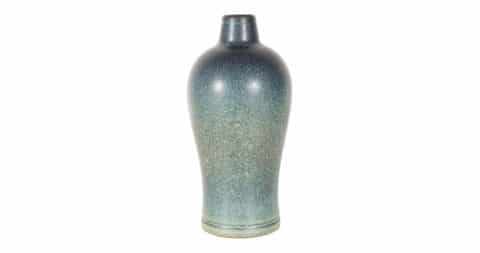 “The glaze on this piece is what sold me. I love to bring the colors from the outdoors into my interior environments.” 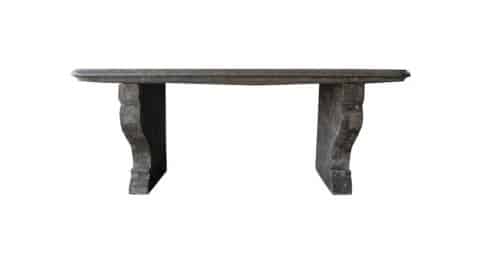 “This could work in an entry, as a serving table in a dining room or in a garden.” 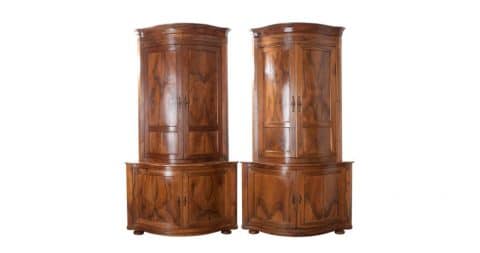 “An elegant way to conceal toys in a family room”