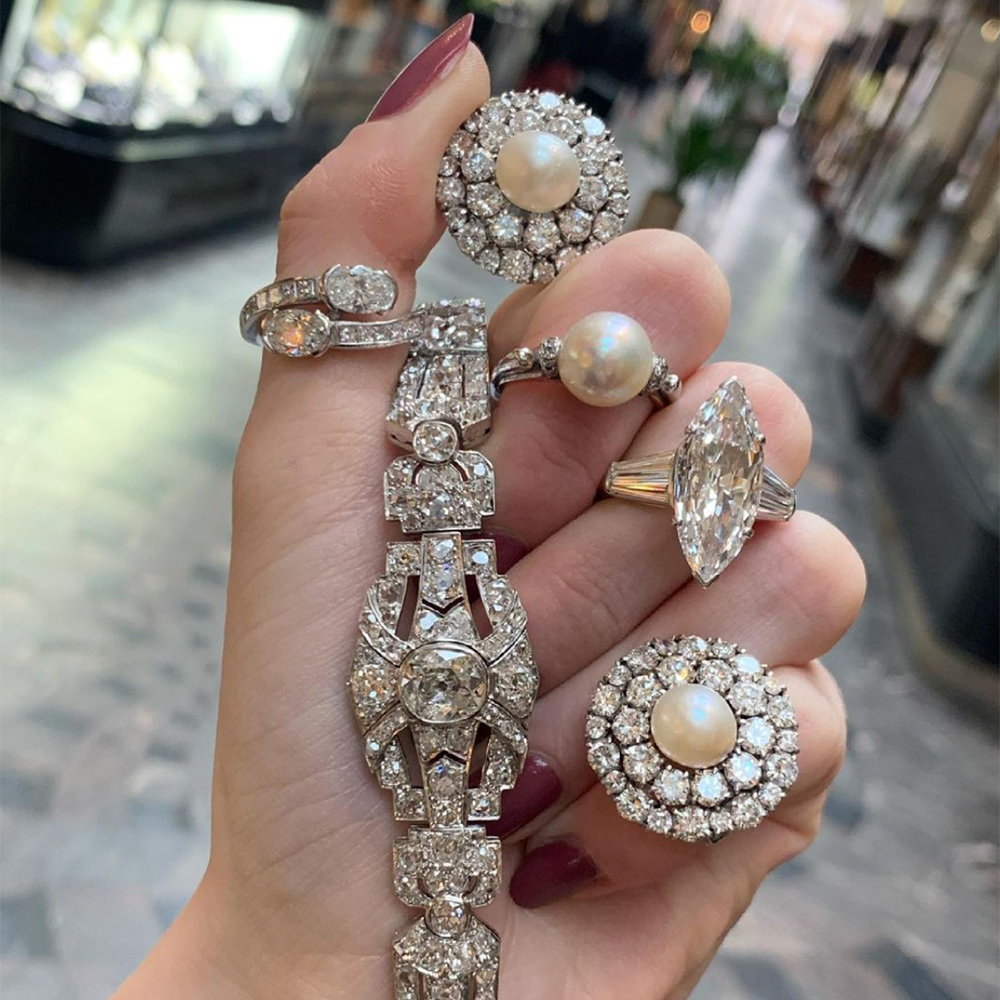 Built in the 19th century, the shop-lined walkway in the city’s fashionable Mayfair district is a jewelry lovers’ paradise.

November 28, 2021The enduring grandeur of the Burlington Arcade makes it one of London’s most charming attractions. Connecting Old Bond Street and Piccadilly, the famous Regency promenade, with its vaulted glass ceiling, is home to 45 luxury boutiques, including a lineup of exclusive jewelers who deal in modern, bespoke and antique treasures.

Opened in 1819, the arcade was built at the behest of Lord George Cavendish, Earl of Burlington, as a safe place for upper-class ladies and gentlemen to shop, away from the hoi polloi. For 200 years, it has been patrolled by beadles, constituting the oldest and smallest private police force in London. Still sporting Victorian frock coats and top hats, these guards enforce similarly antiquated rules: It is prohibited in the arcade to whistle, carry large objects, play an instrument or open an umbrella.

Such eccentricities add to the character of this pretty pocket of London, a corridor of twinkling temptation come the holiday season, as festive lights and decorations bring to life its many dazzling vitrines.

With gift giving at the forefront of our minds, Introspective takes a look at five jewelry boutiques that enhance the romance of this unique shopping strip with their exceptional collections.

Do you have a penchant for diamond-studded Cartier panthers? Or is a Victorian diamond and emerald salamander bracelet more your thing? Whatever your preferred style — whimsical, impactful or daintily imagined — you’re likely to find it in Susannah Lovis’s shop.

Lovis is the Burlington Arcade’s indisputable queen of vintage and antique jewels, with a soft spot for colored stones, as demonstrated by her vibrant Instagram feed, a confetti storm of ruby, sapphire, emerald and diamond creations.

A fixture in the arcade for 22 years, she specializes in jewels of the Georgian, Victorian, Edwardian and Art Deco periods, as well as signed pieces by such storied houses as Cartier, Tiffany & Co. and Bulgari.

Lovis avows a true passion for her trade. “The wonderful thing about dealing in vintage and antique jewelry is that it is mostly one-of-a-kind,” she says. “A piece that comes to mind is a topaz necklace that’s a blend of the Georgian and Victorian eras. The topaz section is a Georgian brooch that has been reimagined as a necklace by a Victorian craftsman. Redesigning jewelry is something that we think of as a modern phenomenon, but it has been a part of jewelry for hundreds if not thousands of years.”

Like many in the business, she’s noticed a turn toward statement pieces post-lockdown. “There has been a surge of interest in yellow gold, especially chunky eighties pieces. So, big earrings and rings are selling really well,” she notes. “For Christmas, I think earrings are a good choice, as they can really light up someone’s face. It’s always wonderful to know that we have had a small part in making someone feel really special.”

Azza Fahmy broke boundaries when she became the first female to train with a master goldsmith in her native Egypt. Since founding her jewelry brand, more than 50 years ago, her mission has been to translate her cultural heritage into the language of contemporary design, earning her a reputation as an arts-and-crafts ambassador for her country.

Today, her daughter Amina Ghali continues to advance this project as head designer, using the Middle East’s myths, ancient history, architecture and natural beauty as the basis for bold and dynamic designs that often combine gold and silver.

Pieces are replete with decorative symbols and opulent gem-set designs, achieved through such age-old techniques as repoussage, ajouré and intricate filigree work, which is a house signature.

Each is a labor of love, showcasing the extraordinary skill of the artisans. But Ghali does have her darlings. “The star and crescent earrings will always be among my favorite pieces. They feature a timeless yet super trendy design that combines modern filigree, diamonds and the stars as ear climbers.”

She also has a recommendation for anyone looking to start the New Year with a clean slate. “What could be more perfect than the scarab — the symbol of transformation and new beginnings? I personally own a scarab ring and never take it off.”

Even a cursory glance through the annals of jewelry history will reveal the long-standing reputation for excellence of this London institution, founded in the heart of Mayfair in 1849 and located in the Burlington Arcade since 1992. “Hancocks is proud to have held Royal Warrants ranging from Queen Victoria to the Queen Mother, in addition to appointments from nearly all the European royal households,” says Guy Burton, the company’s bespoke director.

The firm is expert at recasting old-cut diamonds and other gems in new bespoke pieces, such as rings made from 100 percent recycled gold set with flush-mounted stones. It also boasts an astonishing collection of antique and vintage jewels, several of which have fascinating backstories.

“We often buy back pieces that we made in the nineteenth and early twentieth centuries,” says Burton. “One such piece was an incredible Egyptian revival necklace that the Prince of Wales  — later King Edward VII — commissioned Hancocks to make for his mistress the famed actress Lillie Langtry, for her role in the West End as Cleopatra. A few years ago, we managed to acquire this fantastic necklace, and it was subsequently borrowed and worn by Meryl Streep in the movie The Devil Wears Prada. So, it has a history in the limelight!”

Indeed, just like couture and prêt-à-porter, jewelry styles often loop back in time. “Vintage pieces from the nineteen fifties to the nineteen seventies, when bold gold jewelry was dominant, are currently in very high demand,” says Burton.

He describes the arcade as a peaceful “shopping sanctuary,” just as it was intended to be. “You can really feel the history of London here.”

Michael Rose has not one but three adjacent store fronts in the Burlington Arcade. This proliferation of properties is perhaps not surprising, given his 33-year tenure under the Regency roof.

Although both contemporary and antique pieces are showcased, Rose’s focus is on old-cut stones, particularly Asscher-cut diamonds, a favorite during the Art Deco era.

He and his team are known for their expertise in enhancing gemstone luster. “Often old stones that have been passed down through generations can be chipped or damaged or maybe not cut to make the most of their fire, brilliance or color,” says Rose. “We have links to the best diamond cutters and lapidaries in the trade. They sit down at their work benches to hand cut and repolish these stones to literally transform them. The difference can be astonishing!”

One standout is “a truly remarkable reversible carved-sapphire signet ring in eighteen-karat yellow gold, circa 1940,” says Rose. “This ingeniously crafted ring features a deep blue cabochon sapphire engraved with a seal on one side. The wearer can choose to either display the sapphire’s smooth, polished dome or use the ring’s clever side mechanism to flip over the sapphire and reveal its seal. I have never in my career seen another ring like it.”

Family run for three generations, Bentley & Skinner holds two royal warrants: to Her Majesty the Queen and His Royal Highness the Prince of Wales. A specialist in antique jewels, Fabergé and silverware, it has ties to the British monarchy reaching back to the late 19th century, when Skinner & Co supplied Queen Victoria with jewels. (It was rechristened in 1998, after Skinner & Co merged with Bentley & Co.)

More recently, Bentley & Skinner has outfitted the stars of British drama series Downton Abbey and The Crown with a variety of opulent tiaras and diamond suites. Today, it deals exclusively in exquisitely made pieces like Belle Époque diamond necklaces and unique Edwardian pieces.

Formerly occupying two different addresses within the arcade, Bentley & Skinner has relocated to a storefront on Piccadilly, down the block from the corridor’s entrance. It is a Mayfair institution, with pieces suited to both modest and extravagant budgets. “I think our Fabergé gold-mounted, two-color guilloche-enamel DESK CLOCK is one of the most important pieces in our collection at the moment,” says the firm’s Ilias Kapsalis.

Asked about trends, he points to a shift toward simple but impactful pieces. “There has been an increase of enquiries for yellow-gold Victorian chains and Victorian gold carved hoop rings and bracelets,” he says.

“Our displays are very traditional,” he adds. “Most of our pieces are presented in their original boxes or in new handmade fitted cases.” We can’t think of anything more luxurious to unwrap.