These Powerhouse Creatives Are As Individual As They Are Authentic 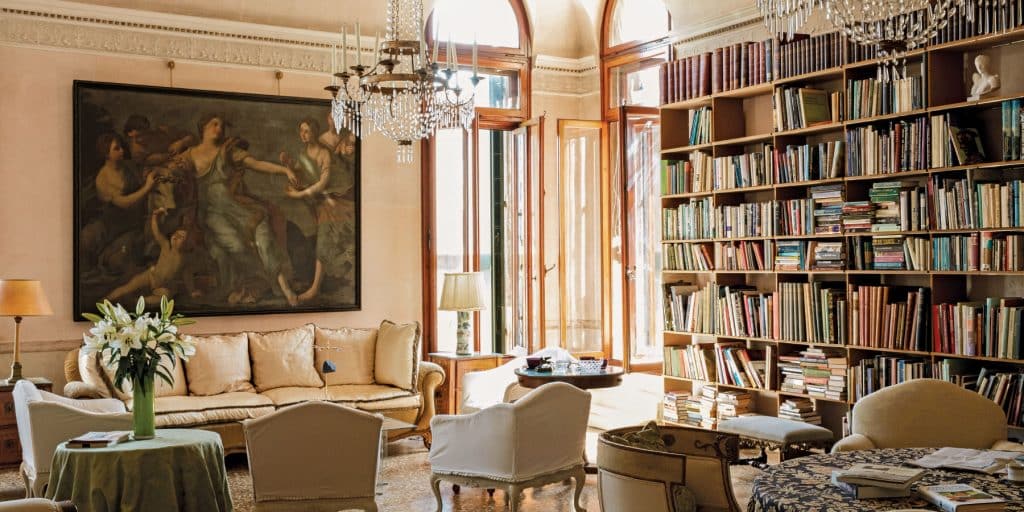 In a digital world, originality is becoming increasingly rare, says our author, the creative director of Schumacher. Her new book shows how 27 nonconformists are making a bold statement. 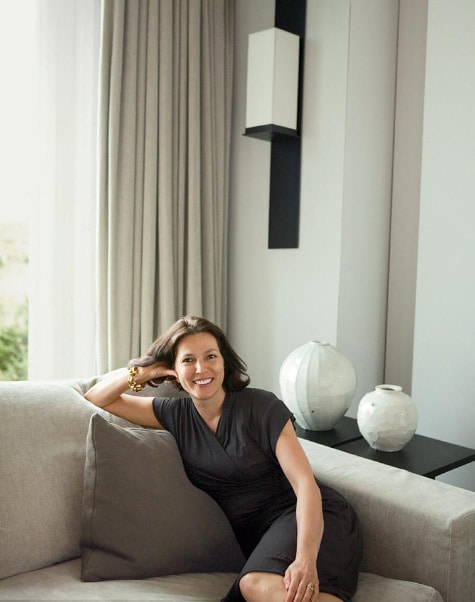 October 23, 2017Dara Caponigro (above) and Melanie Acevedo hatched The Authentics as a reaction to the digital connectivity they felt was killing individuality (portrait by . Top: Environmental advocate Jane da Mosto says the library in her family’s 16th-century Venetian palazzo is her favorite room. All photos by Melanie Acevedo, courtesy of Clarkson Potter.

The primary idea for The Authentics (Clarkson Potter) was actually brewing for a really long time before the photographer Melanie Acevedo and I were able to pin it down and fully articulate it in book form. Something started to happen about 15 years ago, as the world was becoming more digital and corporate culture was growing bigger and bigger. My family and I used to live on the Upper West Side of Manhattan, and so many of the quirky neighborhood places were overtaken by big-box stores during this time. It got to the point where I’d joke with my husband, “Let’s go downstairs and visit the mall.” I still loved New York City, but I also recognized that the soul of the city I’d moved to several decades earlier — a place that was edgy and kaleidoscopically varied — was fundamentally changing, and that the wider world around me was changing too.

​Melanie and I started having conversations about how digitization was impacting culture. As journalists covering lifestyle (I’m the former editor in chief of Veranda and a founding editor of domino), we both saw this happening all around us, how it was suddenly so easy for someone to claim expertise in a field they might know little about, and how the worlds of blogging and social media were accelerating trends and often creating reference vacuums in which everyone was posting about the same things and creating insular feedback loops that left little room for disruption and surprise. Both of us craved the jolt of true originality and felt that it was becoming harder and harder to find. 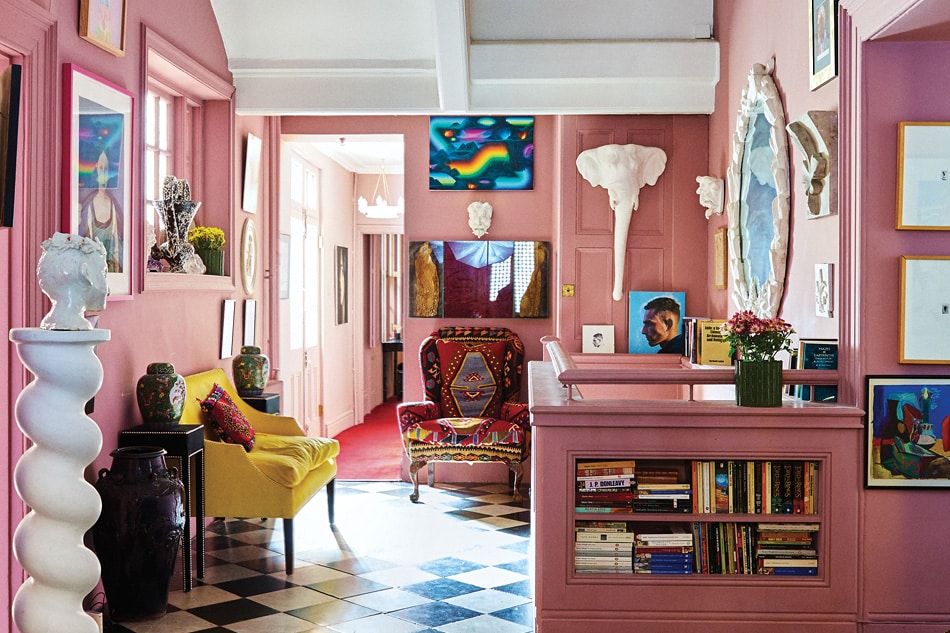 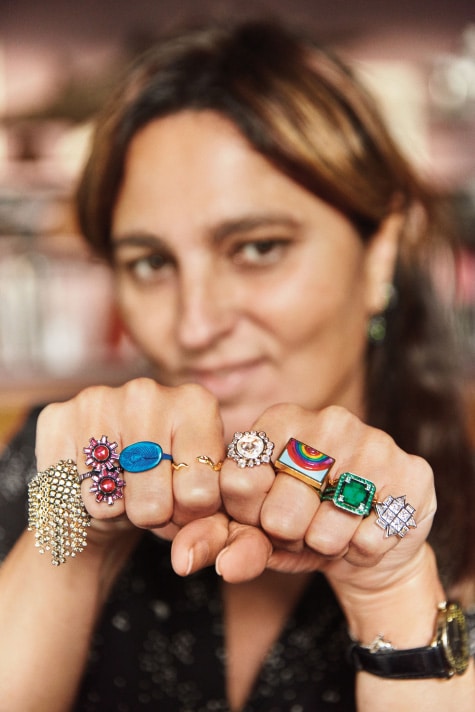 “I put my heart and my soul into my jewelry, and I hope it reflects my curiosity about, fascination with, and love of the beautiful and the interesting,” Azagury-Partridge says in the book.

The Authentics grew out of our shared desire to shine a spotlight on those people who were eschewing the new-media landscape to defiantly do their own thing. We wanted to celebrate individuals from a broad swath of creative fields who, among the onslaught of a digital culture that was increasingly cultivating sameness, were finding ways to resolutely pursue their individual passions and unique points of view.

Identifying and courting our subjects for this project took us on an eye-opening and joy-affirming journey. So many moments underscored for me the number of extraordinary creative professionals who are carving out their own idiosyncratic paths, and reminded me to step outside my own preconceived notions. Jonathan Adler is a perfect example of this. He is such a powerhouse and his brand is such a juggernaut that it’s easy to forget how beautifully his work expresses who he truly is. At heart, Jonathan is simply a happy potter, and although he has built an empire, his own quirky, indelible vision is still at the very core of everything his company does and the way he lives: His mid-century-style house on Shelter Island, which he shares with his husband, Simon Doonan, is a beautiful piece of modernist architecture with incredible views of the water, but it is also a warm, colorful haven filled with offbeat treasures (a colorful hanging sculpture from his grandmother, a huge 15-foot-long macramé owl) and lots of Jonathan’s own wares. What comes through in our book is just how down-to-earth Jonathan is: He loves everything in his house, but he’s not that attached to anything — except, that is, to Simon — and he’s charmingly self-deprecating. When we asked him what he would have done if he had taken a different career path, he answered, “Barista? I’m totally unemployable. Thank God this pottery thing worked out.”

All the people we included in The Authentics got where they are not because they set out to conquer their own particular corners of the universe but because, from the very beginning, they chose to follow their hearts. Honesty, integrity and courage were recurring themes, as was the conviction to give back. 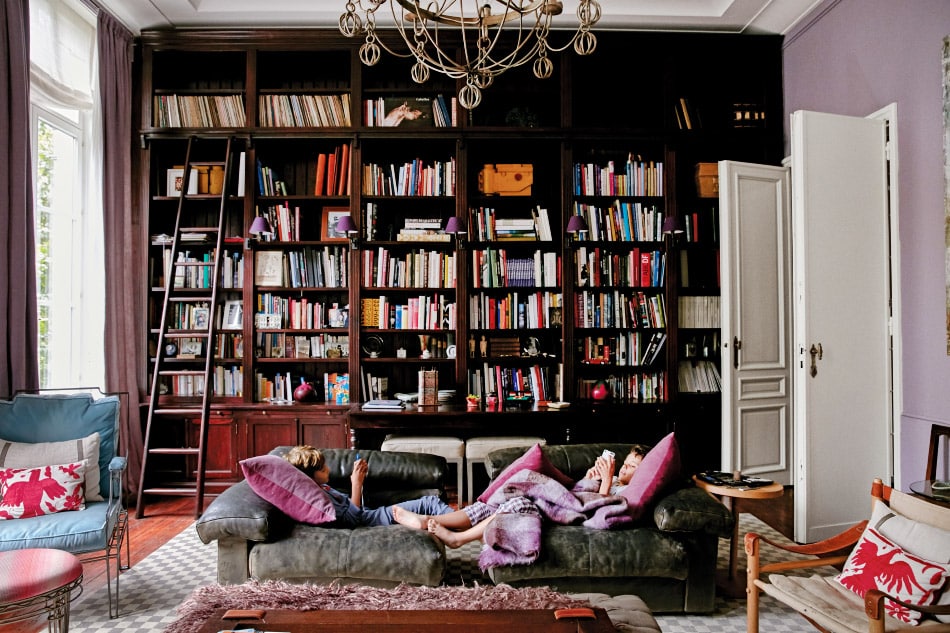 “Brussels has taught me to be more resilient and determined, to be more demanding of myself and more structured,” says Anne-Marie Midy, who founded furniture company Casamidy with her husband, Jorge Almada. Here, their sons lounge in the library of their Brussels home. 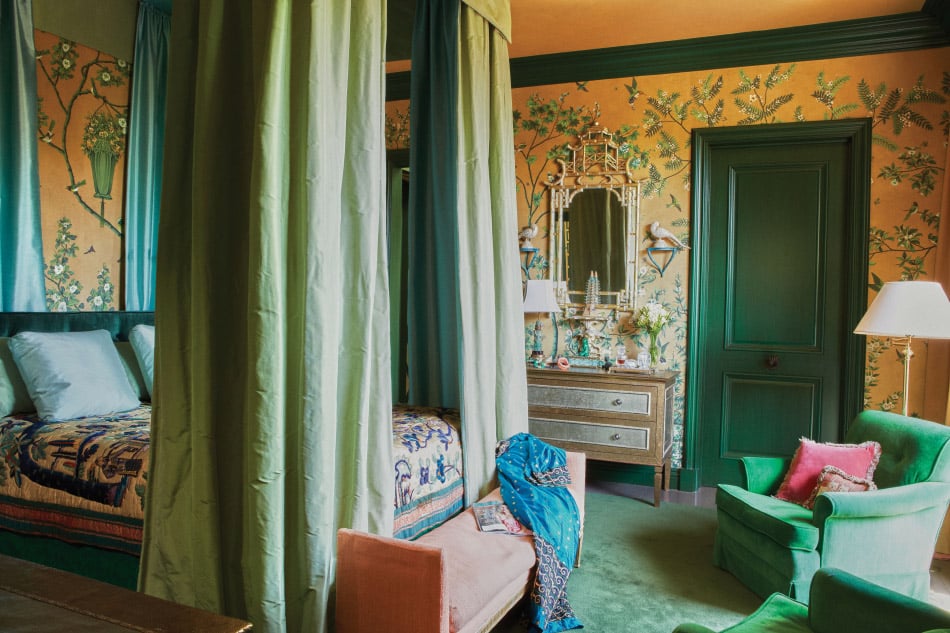 “I enjoy rich embellishment in an era of minimalism, but I can actually see both sides of the story,” designer Hutton Wilkinson says. The Beverly Hills home of Wilkinson and his wife, Ruth, is next door to Dawnridge, the estate of his late business partner and mentor, Tony Duquette. 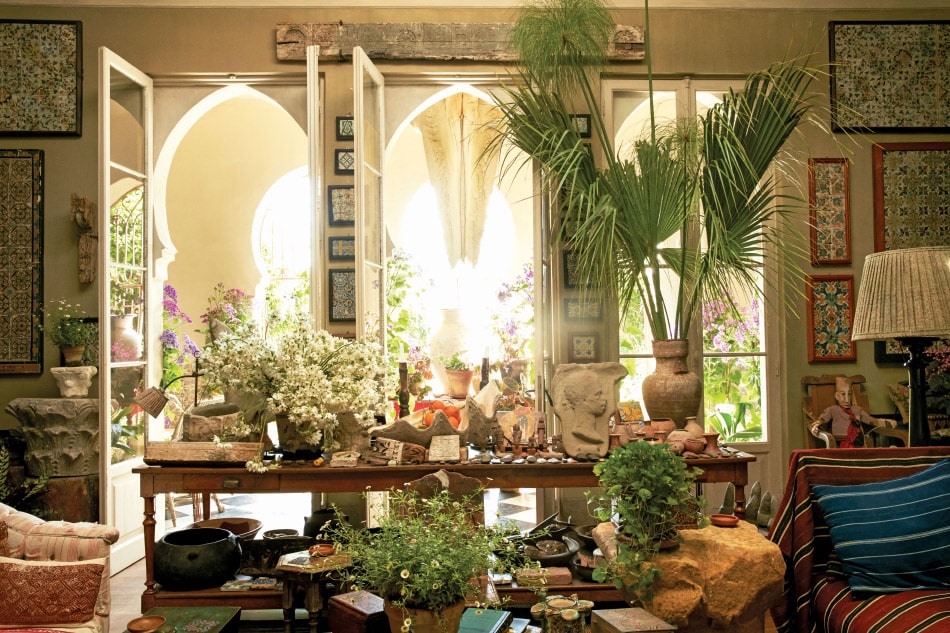 “My home defines me because I love everything I put in it,” Italian writer and garden designer Umberto Pasti says. “I don’t understand what ‘decoration’ means. All my rooms are just packed with things I love.” He shares this Moroccan home with his partner, fashion designer Stephan Janson. 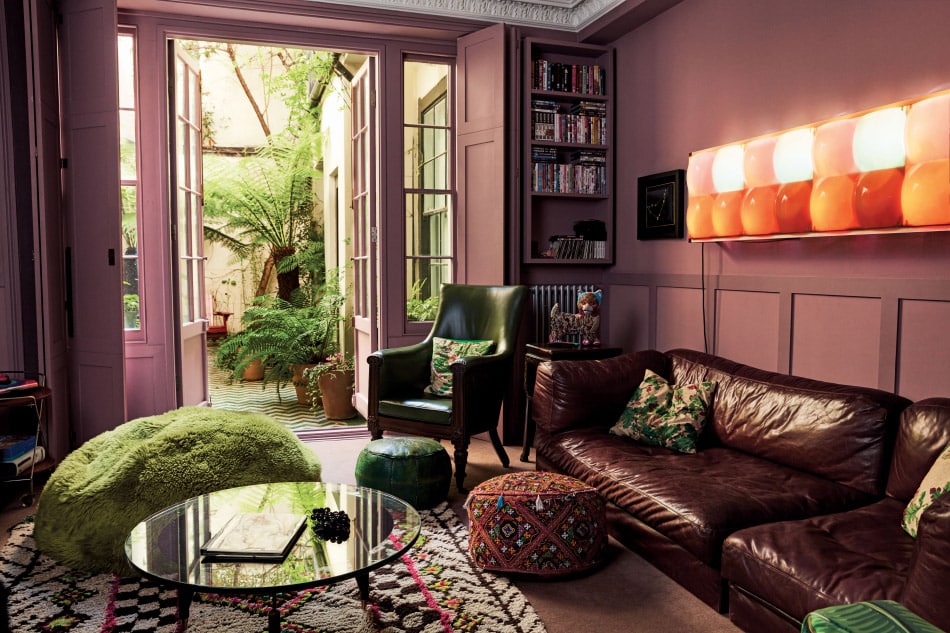 About reading, Azagury-Partridge says, “When I was young, it was the one thing that showed me I could have a life of my own making and invention.” Above, the living room of her London apartment, which she shares with her husband, ad director and TV writer Murray Partridge.

Umberto Pasti is an incredible polymath — a brilliant writer, translator and garden designer who, over the past 20 years, has called Morocco his home away from his Milanese home. In Tangier, he painstakingly conjured his house (or houses, I should say, as they are a series of pavilions) into a warm, magical place filled with layers of European and Moroccan antiques, humble and elaborate textiles, finds from the natural world (a giant whale bone that washed up on the shore) and masses of cut flowers and plants from his own garden. And, entirely undaunted, he has established a thriving furniture workshop in a local village much in need of economic stimulation, providing skills and a métier to people who had few options. While we were on location to shoot him for the book, Umberto’s robust spirit of generosity was evident everywhere. He welcomed us with unbelievable warmth and spoke about how “we are all linked in a beautiful, mysterious chain — we can’t be happy if our neighbor is unhappy. And our neighbors here are not only the members of our own species but also the animals, the plants, the lichens, the mushrooms,” he concluded, advising, “Try and live in a more responsible way.” 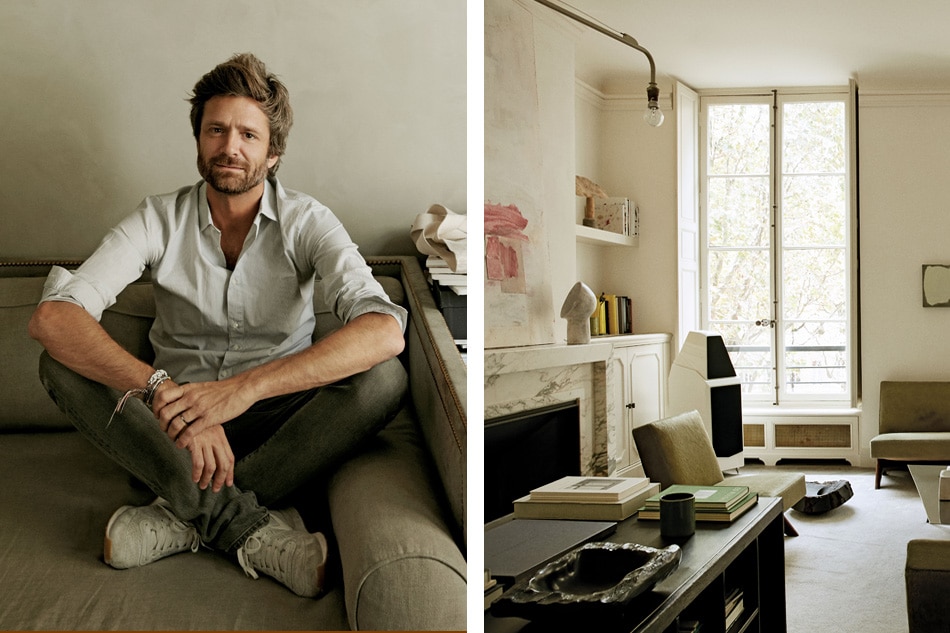 Left: “I love and care about the objects and furniture around me, but I am not attached to the idea of possession,” says architect Joseph Dirand, pictured in his Paris apartment. Right: Dirand’s airy living room features huge windows and a marble fireplace.

​Given that Joseph Dirand’s work is so precise, we weren’t quite sure what to expect when we arrived at the architect’s Paris apartment to do our shoot. What we found was an affable host who had an undeniably exquisite eye but was also supportive of our creative vision. As you can imagine, everything in his space has a strong point of view, but his rigorous precision is the opposite of sterile — producing an effect both charming and captivating. He is a poet of volume, materials and light, and his apartment conveys a thrilling, unexpected sensuality. His inspiration for the architecture was Italian — not French, as you might expect given that he is a Frenchman — and materials like honed marble and waxed wood mix with modern art and organic objets to create a space that is at once dynamic, serene and comfortable.

“We wanted to celebrate individuals from a broad swath of creative fields who … were finding ways to resolutely pursue their individual passions and unique points of view.” 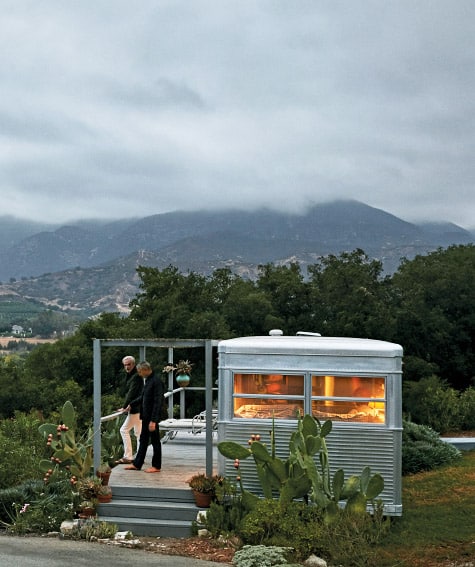 “Wherever you are is home,” says interior designer Paul Fortune. “It’s who you are and how you behave there that make home a place that welcomes you and others.” Here, Fortune and his partner, potter Chris Brock, stand on the deck of their Ojai, California, home.

One of my favorite shoots was of the jewelry designer Solange Azagury-Partridge. I’m a huge fan of Solange’s work, which has such a rich, dark mystery to it, and so was determined to include her in the book. Being in the fashion orbit, she is surrounded by PR people whose job is to be her first line of defense and protect her from unnecessary distractions. It took some effort to reach her and set up a shoot, but once we were with her in her London townhouse, I think she enjoyed being with other women who were also passionate about what they were doing. Her home is filled with color and a boisterous mix of objects that speak to her edgy sensibility: a pink entryway with rainbow art; a living room with surreal scenic wallpaper and a bold, blood-red Murano chandelier; a purple bedroom with a mix of nudes, sketches by her children and more rainbows, this time interpreted in neon. It was remarkable to see her singular point of view extend so seamlessly from her jewelry design into her home.

We uncovered some interesting and funny synchronicities among our subjects. For instance, many of them value reading books and find rejuvenation in spending time in nature. And many of them love their beds — and soup! But perhaps the strongest through line we discovered was that every single one of the people we included in the book has an insatiable curiosity — no matter where they are in their careers, no matter how accomplished they’ve become, they still approach the world with wonder, and they’re still deeply engaged with it on an intimate, granular, fiercely independent level. For me, that compulsion to embrace life in a bear hug and live it on your own terms is perhaps the most authentic thing of all.