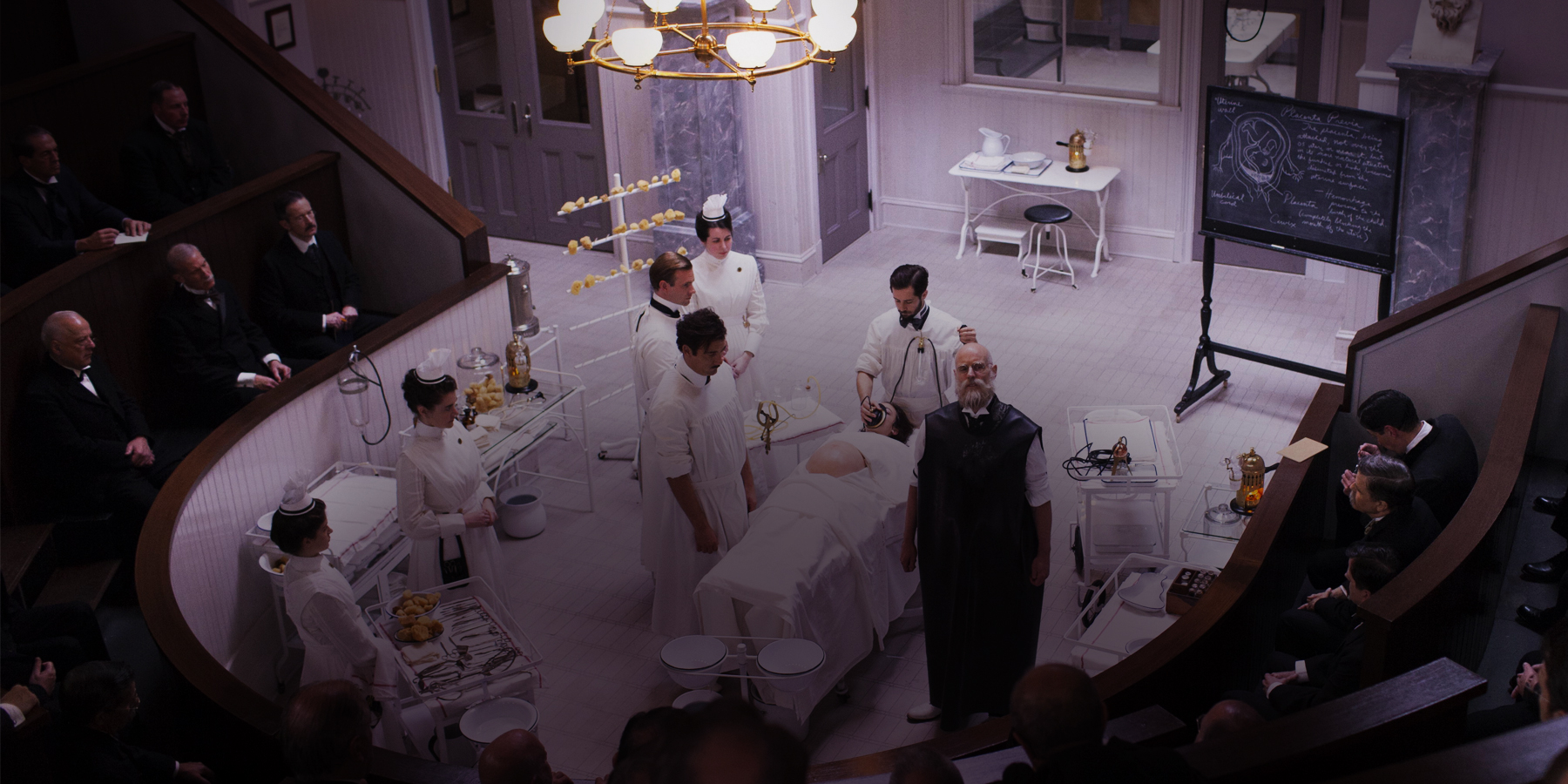 Director Steven Soderbergh’s new period medical drama has captivated audiences not only with the cringe-inducing verisimilitude of its operating-room scenes, but also with the to-die-for details of its old-school New York setting. Here, in a piece from 1stdibs’ blog, The Study, set decorator Regina Graves takes us behind the scenes. 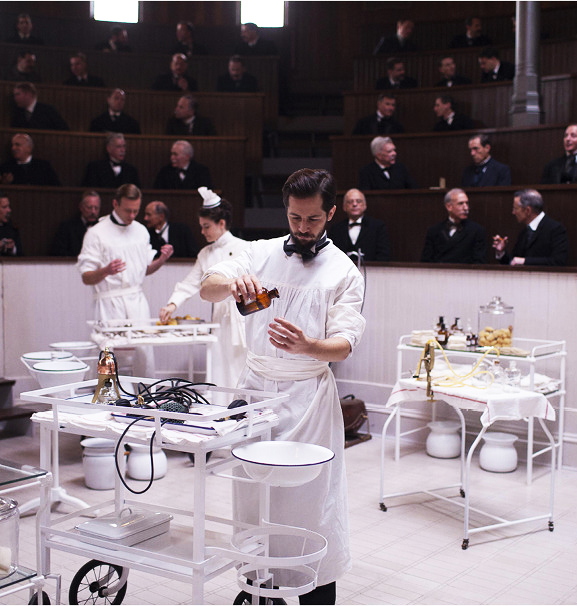 August 27, 2014During the show’s era, operating theaters functioned as just that — a place where an audience of spectators watched surgeons perform operations, with back-and-forth commentary often taking place.

Do you consider yourself a dyed-in-the-wool design obsessive? Well, here’s a quick diagnostic test: Watch the first 10 minutes of Steven Soderbergh’s new period medical drama, The Knick, and then reflect on what most stood out to you. Was it A) the unflinching, hyper-realistic shots of grisly surgical gore and intravenous drug use, or B) the two-tier, brass-and-milk-glass chandelier hanging over the operating theater? Those who answer the latter may be suffering from obsessive-compulsive design disorder. Happily, it’s incurable.

The critically acclaimed Cinemax show centers on John Thackery (played by Clive Owen), a brilliant-but-inscrutable surgeon who performs radical procedures on his patients at a fictionalized version of the Knickerbocker hospital in New York City. Set in 1900, The Knick is able to subvert the narrative cliches of most medical procedurals — not everyone makes it out of the O.R. alive — and to explore the rich visual landscape of late-Victorian architecture and design.

Regina Graves, set decorator for The Knick, is the one tasked with creating a believable portrait of New York in the early 20th century, which means acquiring everything that appears in the show’s rooms, from furniture to artwork, wallpaper to carpeting. We sat down with Graves to learn more about the process of building the world of The Knick — and had her select a few show-worthy items on 1stdibs.

What are the first steps you take to execute a project like this?

In this instance, it started out by closely collaborating with the production designer, Howard Cummings, who works with Steven [Soderbergh] to set a unifying “tone” for the show. One of the first steps was to determine a color palette. In the hospital set, this is manifest in pale neutrals — whites and grays — basically to make the blood stand out! Otherwise, it’s tonally dark and very rich in texture. And then, from there, we do a lot of research. For this, we heavily utilized historical photographs from the Burns Archive. Dr. Stanley Burns [a medical consultant for the show] has a wonderful collection of period photos — images of clinical rooms, but also medical offices and libraries. 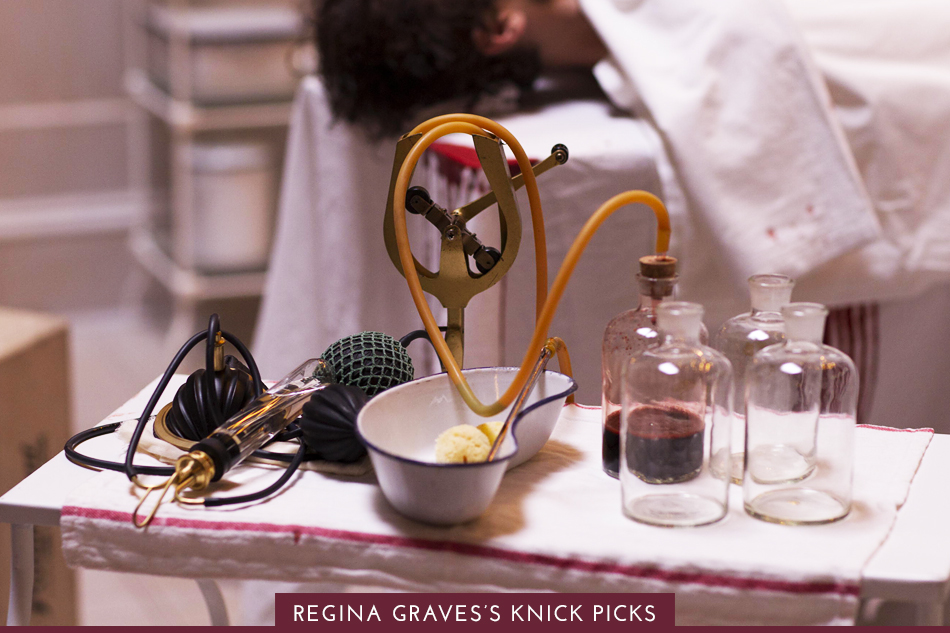 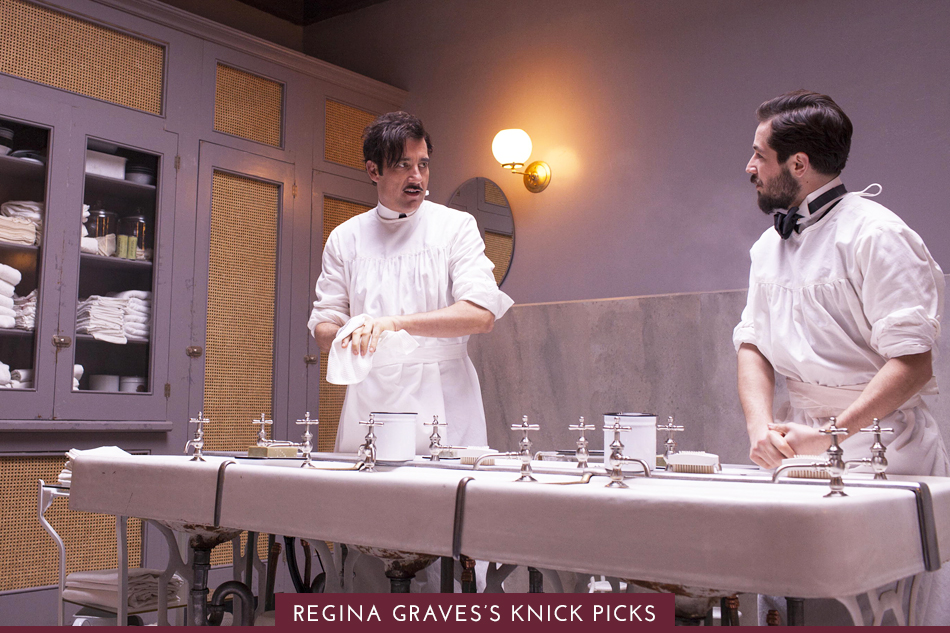 Medical Cabinet with Glass Shelves, Ca. 1910
Olde Good Things NY
The production schedule for The Knick was notably abbreviated — what were your shortcuts or creative solutions?

There were many! What we accomplished in 12 weeks was crazy. We were furnishing sets while the paint was still drying on the walls. I’m amazed at how beautifully things turned out. 1stdibs came in handy so many times. We especially used the New York dealers — Newel and Olde Good Things come to mind — as we shot all over the city.

It’s very striking how contemporary aspects of the design look. Was this on purpose? Why is turn-of-the-20th-century design still so relevant today?

One of the things that we wanted to bring to the show was a modern sensibility. We wanted it to feel turn-of-the-century, but not in a way that felt stuffy, overly precious or devoid of character. We wanted to bring the sexiness, the mystery back to the era. Sometimes, the Victorian Age could be so heavy, so down, so frumpy — we were seeking a twist on that. We tried to be 100 percent historically accurate, but we made the conscious choice to keep it as modern as possible.

As an example, the wallpapers in the protagonist’s home are actually new patterns — very bold, with lots of black and gold — and we mixed those in with period furniture and artwork to give it a splash of life. An item like the large sink in the surgical washroom looks like something you’d see today in a fancy New York City hotel or restaurant. Finding that piece — from an architectural salvage yard in New Jersey — was a stroke of luck.

There are some wonderful little shops in Brooklyn, close to where we film, that are just filled with period-inspired, industrial pieces. And it’s really cool to see these places bringing back that look with a modern freshness. We wanted to bring that newness to our show and give people something to relate to. 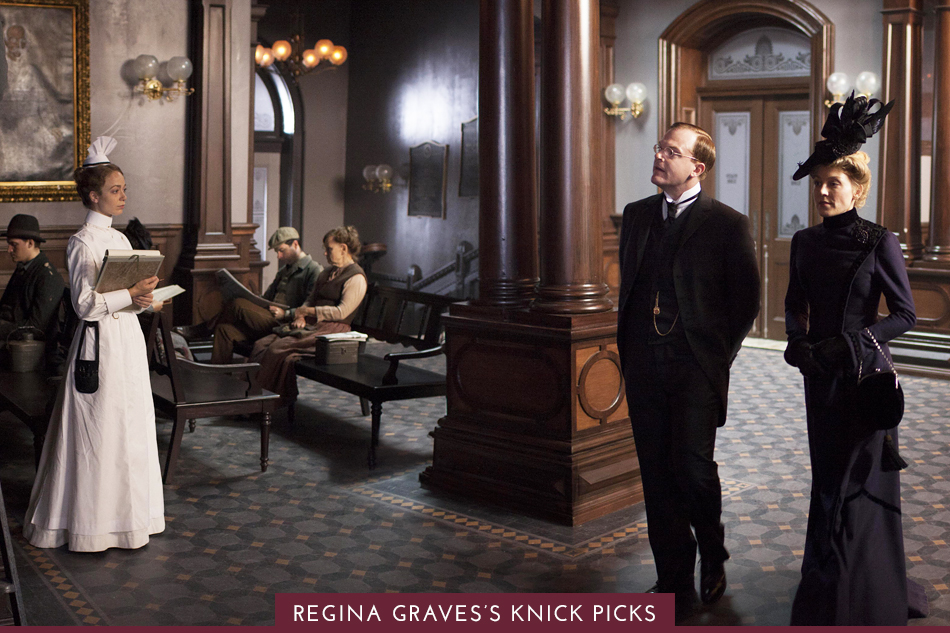 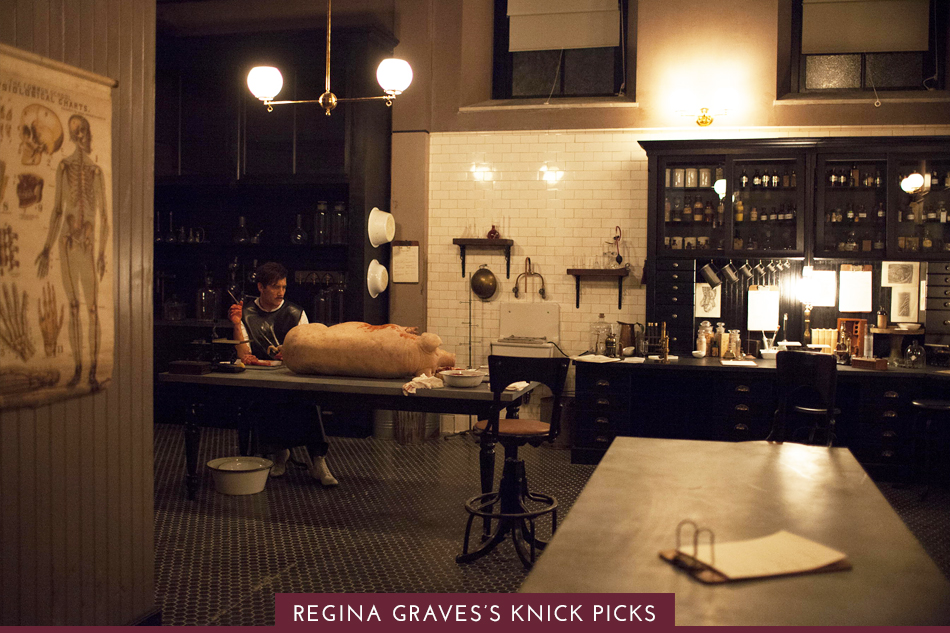 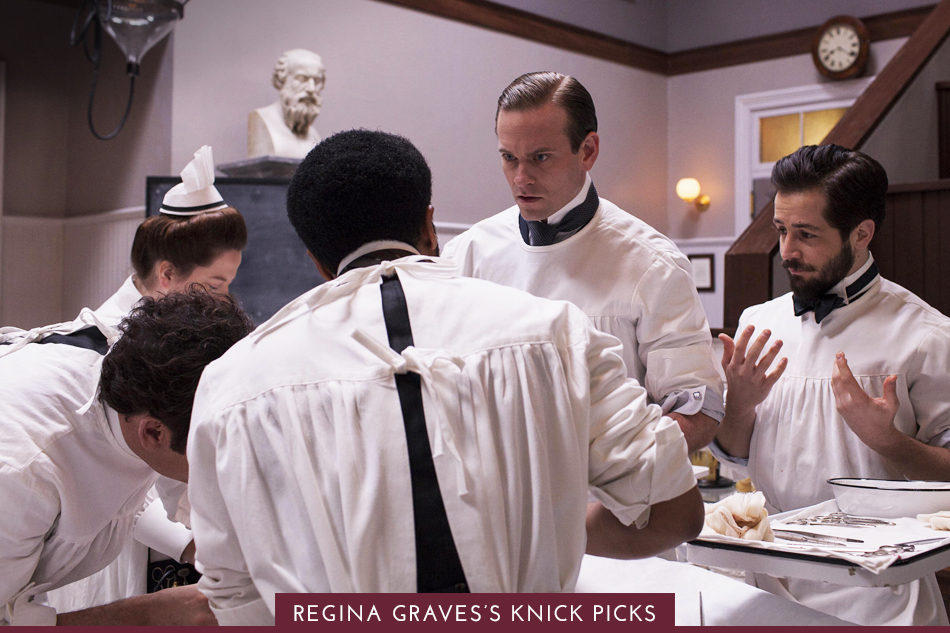 Pair of Marble busts, 19th Century
Newel LLC
Can you talk about designing the operating theater? It’s such a crucible of drama for the show.

The main focal point of the operating theater is the chandelier, which was a custom design based off of an archival hospital image. In the first episode, there is a plot point regarding the hospital being equipped with electricity. Thus, it was first depicted as a “gas” light before being presented as a wired electrical light. The design took that transition into account, and allowed us to do the conversion very simply.

Another prominent set element in the operating theater are a pair of extremely tall pedestals, topped with two solid busts. These came from Newel and were heavier than you could imagine! We thought there should be some grandeur in the room — these busts accomplished that. 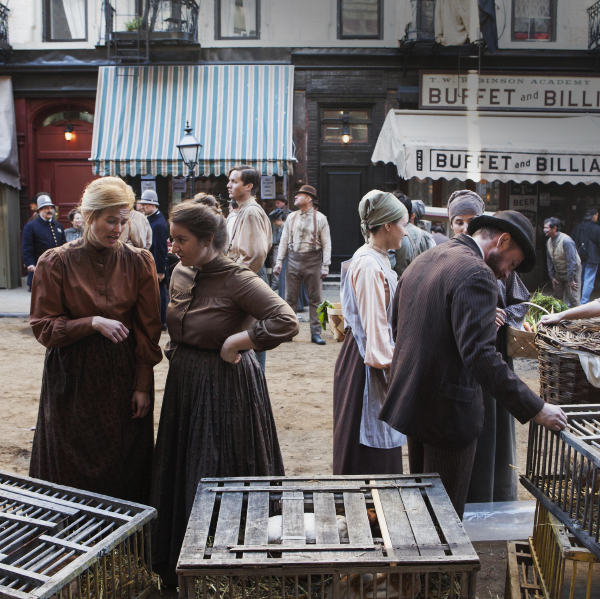 An unusually large amount of The Knick was filmed on location, including on the Lower East Side of Manhattan, which was completely transformed to look as it did 114 years ago, a process that entailed getting rare permission from the city to “dirt” the streets.

The external shots of New York City are incredibly transportive, due to their rich detail. Tell us more about recreating this 1900 version of the city.

Those street scenes were absolutely crazy to shoot! Believe it or not, a major task was sourcing dirt, which we brought in to blanket the street. We had to get different kinds of dirt, — different colors and textures — for Steven to review vis-à-vis our color palettes.

We looked at a ton of archival photos of New York City, especially of the Lower East Side. Basically, we had to cover all of the contemporary storefronts down there with fake fronts. A lot of them we had to build out entirely. We had a hat shop, some tailors, a couple of bars that we aged with signage and canopies.

I also had to get a ton of garbage cans from that period — we would cut out the bottoms of these old, galvanized ashcans to mask things like fire hydrants. I was able to source a lot of these from antiques dealers, but I also got lucky and was able to borrow some from the Boardwalk Empire set! 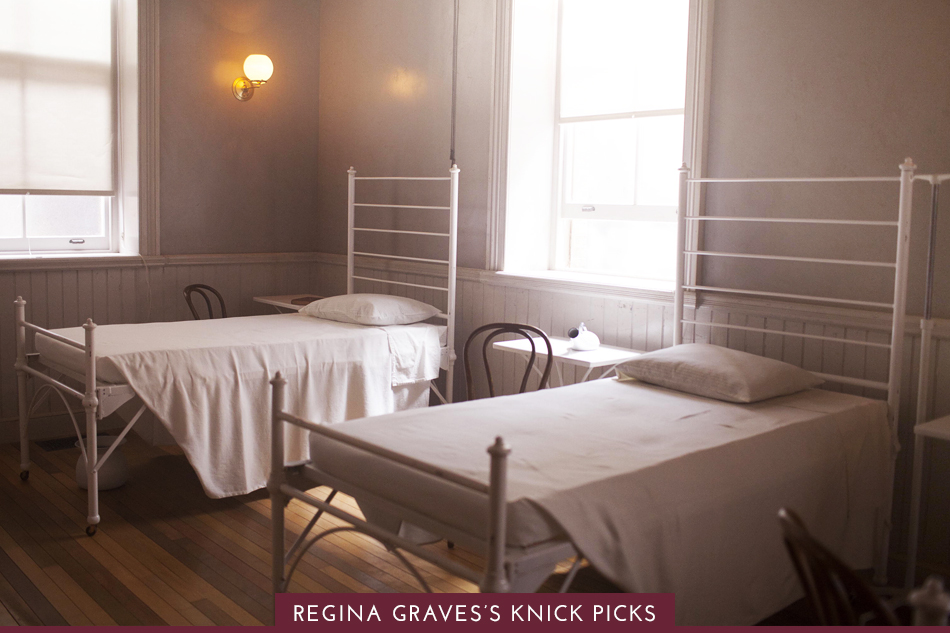 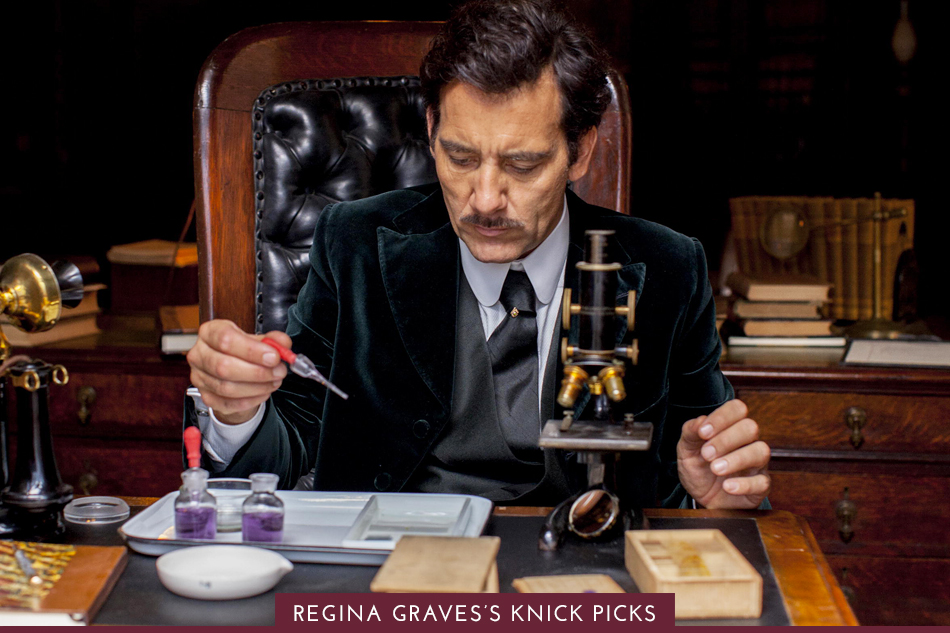 The beds in the infirmary were a really big challenge. In the beginning, the producers — mindful of budgets — were hoping that I could find 20-something beds from a prop house or an abandoned hospital. Unfortunately, I scoured every shuttered psychiatric ward, every closed-down hospital, and couldn’t find anything. So the beds you see on the show are actually reproductions based on pictures of the psychiatric ward at Bellevue. We were biting our nails because they only came in two days before we were supposed to start shooting. But they came out beautifully.

I think the part I love the most is that we’re creating a world — it’s a fantasy world, in some sense, but it’s a world I wouldn’t mind living in. Sometimes.

Also, I have a lot friends who are antiques dealers concentrating on the Victorian or pre-Victorian age, and sometimes it feels like that period has gone out of favor, especially with young people. And I hope that The Knick will help reintroduce some of the beauty of that period to a new audience.