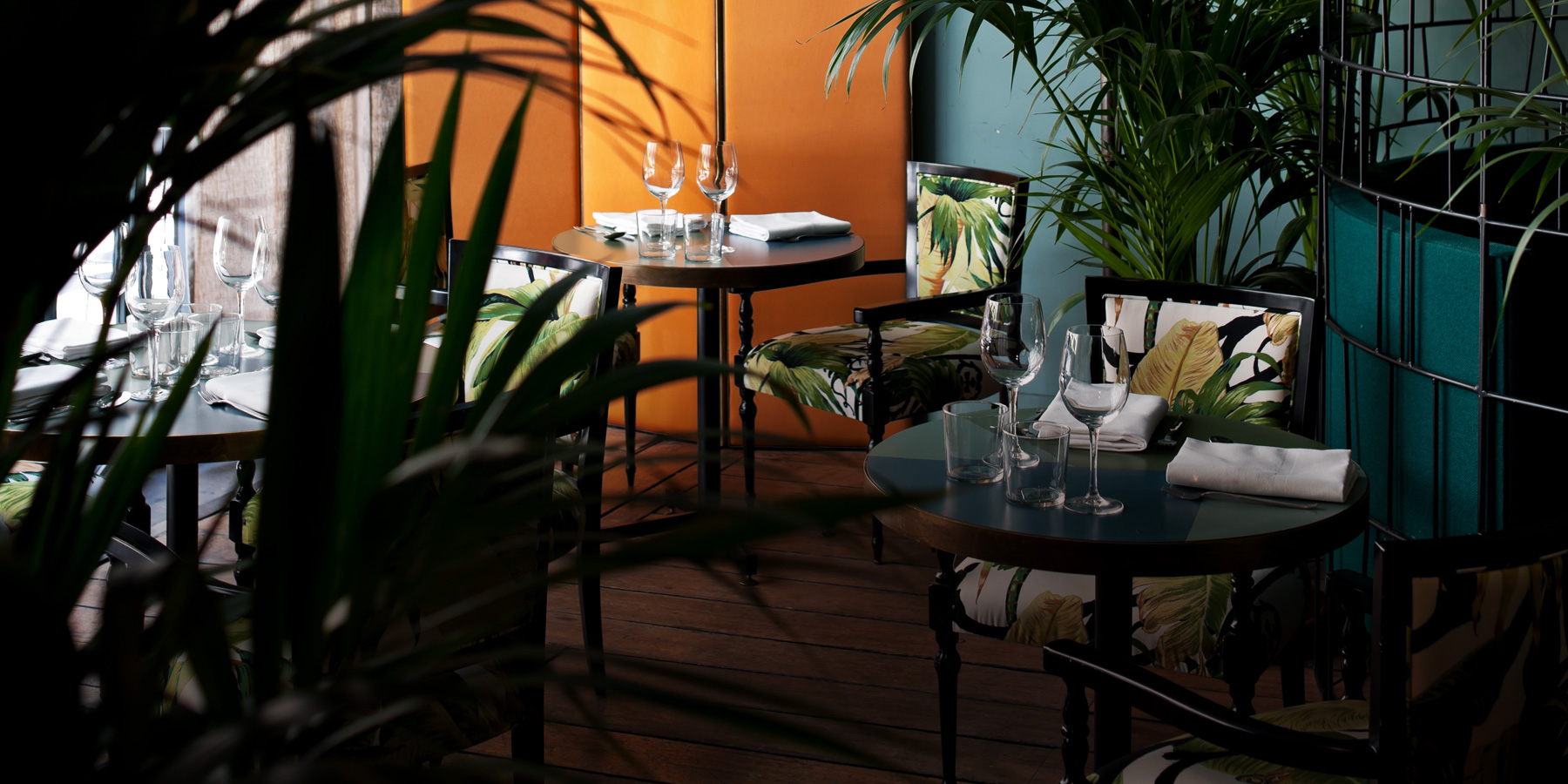 The duo behind the fast-growing Milan-based DIMORESTUDIO root their work in tradition, even as the atmospheric spaces they create spin entirely unique worlds. Recently, they’ve branched out from under-the-radar residential work to high-profile hospitality projects in Italy and beyond. 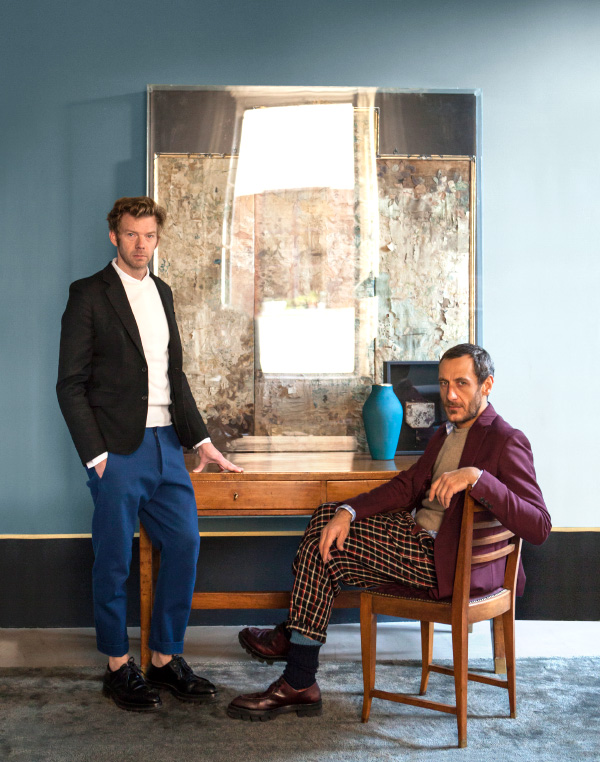 July 2014Moran (left) and Salci have decorating in their blood: the former grew up in Asheboro, North Carolina, which has rich furniture traditions; the latter’s father owned a design shop in Arezzo, a Tuscan town famed for its vintage market (photo by Silvia Rivoltella). Top: The super-chic Caffè Burlot, in Paris (photo by Andrea Ferrari).

Britt Moran and Emiliano Salci, the duo behind the interior-design firm DIMORESTUDIO, have been headquartered at the same address on Milan’s Via Solferino since 2003. When they started out, the pair occupied a single room and employed just one assistant. Today, they oversee a staff of 20 in a 2,100-square-foot space. It’s been a busy decade. Dating from the late 18th century, the building exudes a certain dilapidated charm, and DIMORE’s offices are wonderfully atmospheric, much like the rest of their work. Two Murano glass chandeliers hang in the entrance; in the conference room a set of green velvet swivel chairs surround two square marble-topped tables. Until recently, the pair lived in the building, too. In February, however, they transformed their apartment into a gallery for the furniture collection they’ve designed and decamped to a new space on Via Mozart, which overlooks the garden of Piero Portaluppi’s modernist masterpiece, Villa Necchi.

Moran and Salci chose the name “dimore,” which in Italian means “dwellings,” because it conjures up old, classical-style Italian houses and corresponds to the notion that their work is always rooted in a certain tradition. “There’s a perpetual link [in their work] between the past and the future,” says Nina Yashar, the owner of Nilufar design gallery in Milan. “It’s both very modern and yet also with a slightly historical bent,” concurs Hélène Dubrule, the managing director of Hermès Maison, who hired Moran and Salci to create the decor for a presentation of homeware products held in January in Paris.

For many years, the pair worked under the radar. Most of their early commissions were private residences whose owners did not want them published. Among them: a house in London’s Notting Hill, a Parisian apartment in Saint-Germain-des-Prés and a capacious flat in Milan. A recent series of high-profile commissions, however, has made DIMORE decidedly “hot.” Ian Schrager tapped them to create a lighting installation for the Pump Room restaurant at his Public Hotel, in Chicago, and they also decorated the Paris restaurant Caffè Burlot for French entrepreneur and hospitality impresario Thierry Costes. “There’s a real Italian elegance to their work,” Costes enthuses, “particularly in their use of slightly faded colors.” 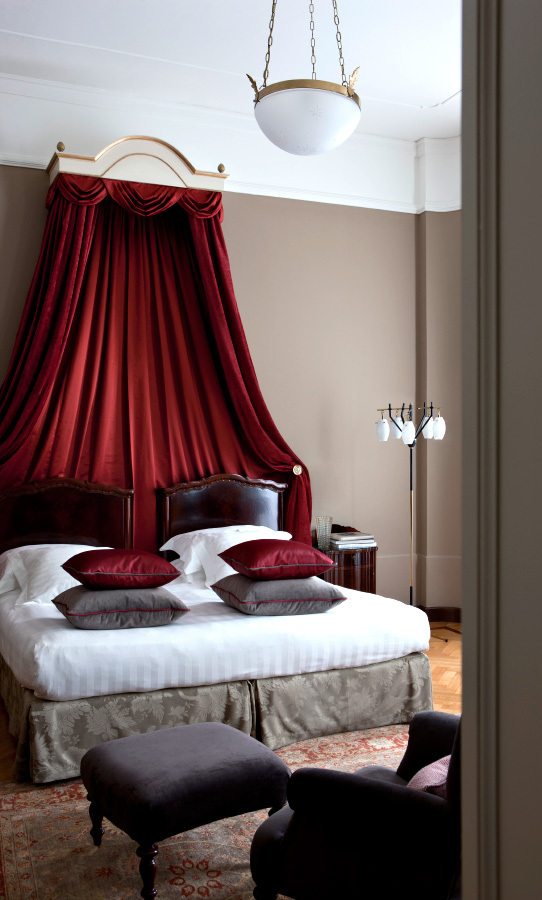 With dramatic draping that recalls a theater curtain, this room at the Grand Hotel et de Milan is dedicated to opera legend Maria Callas. Photo by Andrea Ferrari

That elegance is particularly in evidence at the Grand Hotel et de Milan, which they have been gradually renovating room by room since 2008. “You’re working in the most historical hotel in the city, where Maria Callas, Vittorio de Sica, Visconti and the Duke and Duchess of Windsor all slept, and where Giuseppe Verdi died,” says Moran. “So, you have to be very, very careful.” They added new lighting to the bar, but they chose to maintain most of the original furnishings, simply updating them with new fabrics. This approach, subtle as it is, has achieved a freshening of dramatic proportions. More obvious is the drama of one of their other Milanese projects — the trendy Ceresio 7 restaurant, at the top of a Fascist-style building owned by the fashion brand DSquared2. Redolent of Italy in the 1950s and ’60s, its decor features brass trimmings, vivid red tables, vintage chairs and some stunning industrial-style lamps. Particularly clever is the way in which Moran and Salci handled the inordinately long, thin space, dividing it into different zones using freestanding bookshelves, which create a zigzag route through the room and also offer a sense of intimacy. “You can see through these divisions that are breaking up the space, but at the same time you have your own alcove,” Moran explains.

Almost everyone who knows the partners comments on their complementary natures. “Emiliano is quite effusive and lavish, and thus very Italian,” notes Dubrule, “while Britt, who is American, has a certain rigor and an almost English charm.” In person, Salci also often dresses in a slightly eccentric fashion. The day of our interview, his bright-blue trousers were turned up at the hems to reveal black-and-white checked socks. Moran’s sartorial tastes are less dramatic (though he too has a penchant for trousers cropped a little short), and his speech is soft and inflected with the twang of his native North Carolina. 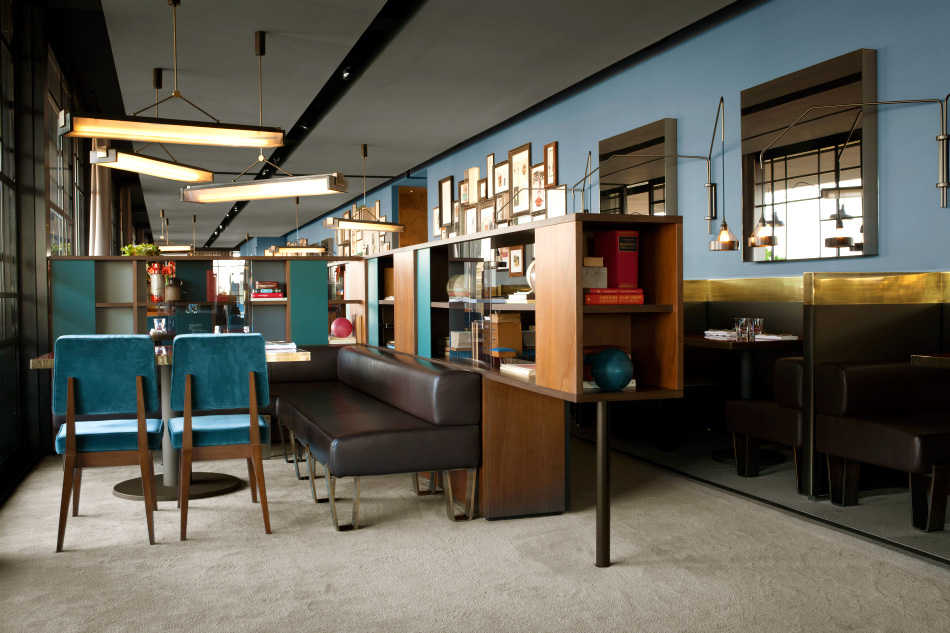 For the Milan restaurant Ceresio 7, the DIMORE designers divided the long, narrow space into intimate nooks, dotting them with vintage and contemporary finds. Photo by Silvia Rivoltella

“There’s a real Italian elegance to their work, particularly in their use of slightly faded colors.” — Thierry Costes 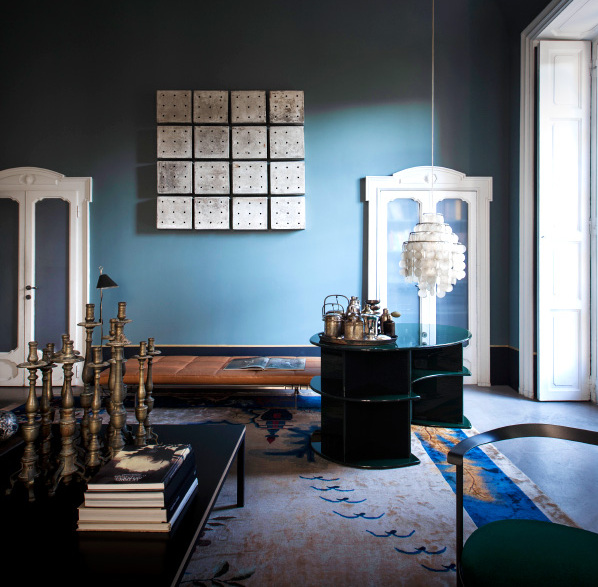 For a wall in a private Milan apartment, Moran and Salci created an original artwork using panels of recycled cement. The rug is an Art Deco-era piece from China; the Catalina armchair is by Azucena. Photo by Beppe Brancato

Both come from families with connections to the world of interiors. Moran was born in Asheboro and attributes his love of more classical furnishings to his early surroundings. “There’s a real tradition of mahogany and highboy pieces that I remember from my childhood,” he recounts. His father runs a firm called L&M Floor Covering. After studying biology and classics at the University of North Carolina at Chapel Hill, Moran planned to become a doctor, but, before going to medical school, he decided to take a year off and ended up in Milan teaching English. “It was just meant to be for a short time to clear my head,” he says, “but I fell in love with everything here.”

Salci hails from Arezzo, in Tuscany, where his father had a furniture store called Art, which sold such international brands as De Padova, Knoll and Vitra. He developed an early love for fashion — “I was always passionate about looking at colors,” he recalls — and would frequent the local flea market, held on the first Sunday of every month, where he’d often spot fellow aesthetes Miuccia Prada and her husband, Patrizio Bertelli. In his early 20s, he took over his father’s shop and turned it into a concept store similar to Moss, in New York, featuring a highly curated collection of contemporary design objects. When the shop was discovered in 2000 by Giulio Cappellini, whose eponymous firm is one of Italy’s leading sources for contemporary design, he asked Salci to become his art director. He held that position for three years, during which time he collaborated on projects with the likes of Jasper Morrison and Tom Dixon. 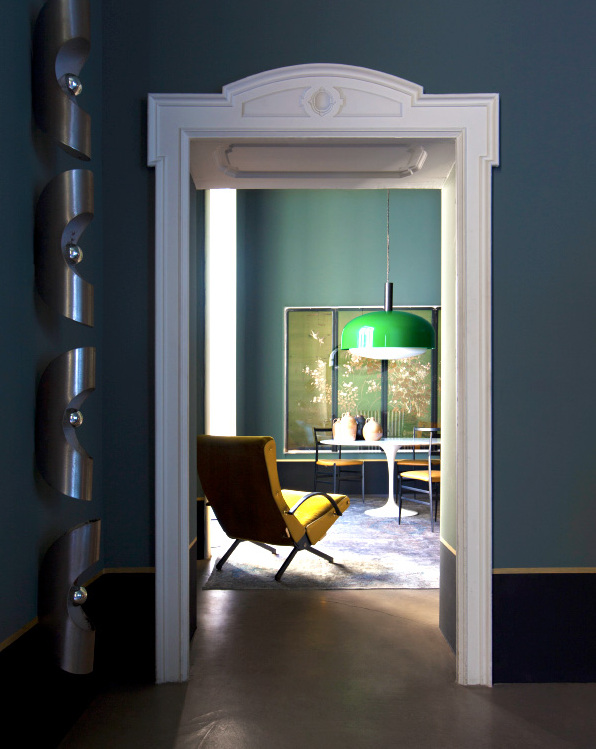 It was during this time that friends introduced him to Moran, who had moved on from teaching to working as a graphic designer. There was an immediate synergy. “We had lots of affinities in terms of style and music,” Salci recalls. He hired Moran to collaborate on a hotel project in Shanghai, which never saw the light of day, and on a private villa in Sardinia for Giulio Cappellini. Two years later, in 2003, they founded DIMORESTUDIO and in 2006 they launched their furniture line, which consists of stylish tables, lighting, chairs and bookshelves, all handcrafted in Italy. “We try to base the collection on things that are difficult to find when we’re doing apartments,” notes Moran, “and which hopefully other people will find necessary for their homes.”

When it comes to interiors, they take inspiration from the work of Carlo Scarpa, Giò Ponti and Portaluppi. Salci also loves Mies van der Rohe (“he’s more neutral, more contemporary”) and they both avow a fondness for the lighting of Achille Castiglioni and Angelo Lelli, as well as the 1950s and ’60s designs that are re-issued by the Italian company Azucena. Their aim, they assert, is to create spaces that are warm, cozy and reassuring. “We’re not into rooms that are so stiff it feels like they will fall apart if you move the ashtray,” Moran says.

They also want their spaces to feel as if they have been there forever, and embrace the notion that their style is tinged with nostalgia. “It’s nice to have pieces of furniture or textures or fabrics that remind you of things from when you were younger,” Moran admits. But their interiors don’t feel conventional either. Instead, there is always something of a twist, whether it be in their use of bold patterns for flooring and fabrics, or an adventurous approach to color. “In my mind,” affirms Salci, “it’s fundamental that things are slightly off. I like it when there are elements of rupture.” The result is an aesthetic that is not only hauntingly beautiful, but also unique. “Their interiors are anything but commonplace,” Thierry Costes confirms. “They have a very strong identity — everything it takes to make it big on the international stage.”