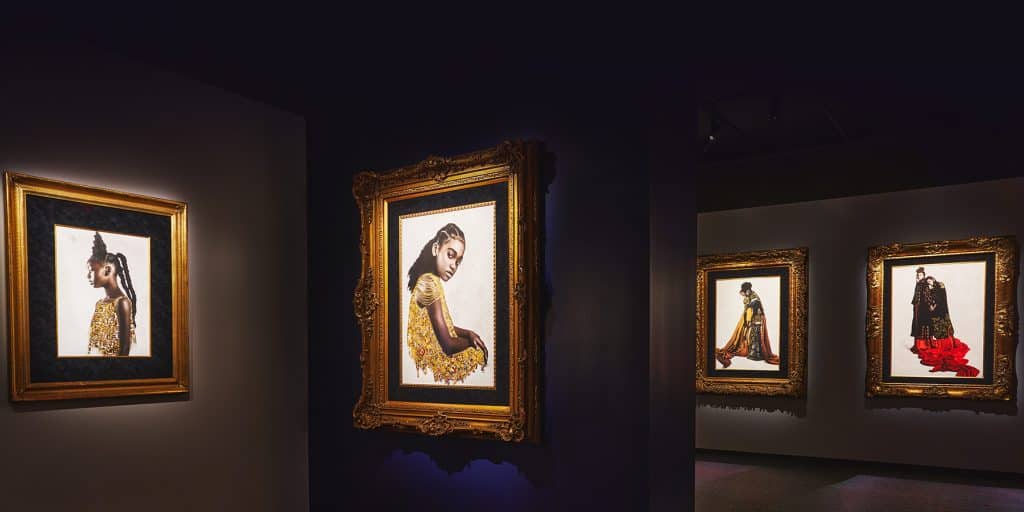 The photography-focused cultural institution is geared towards "experience seekers." 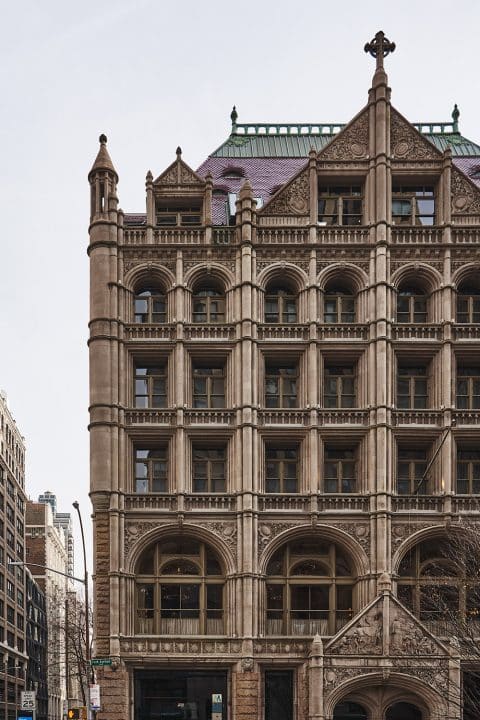 February 2, 2020Fotografiska, launched by Swedish brothers Jan and Per Broman in Stockholm in 2010, opened a New York outpost in December in a landmarked Renaissance Revival building (above) at 281 Park Avenue South. Top: Tawny Chatmon works are currently on view at the museum. Photos by Adrian Gaut unless otherwise noted

New York has no shortage of places in which to see photography, from the brand-new Lower East Side home of the International Center of Photography to numerous Chelsea galleries that specialize in the medium. But Fotografiska New York, which opened in December in a landmarked Renaissance Revival building at 281 Park Avenue South, is trying to be a lot more than an exhibition space. In addition to presenting emerging and established photographers, it caters to “experience seekers” with shopping, dining and entertainment in sometimes spectacular settings.

This Manhattan branch of Fotografiska, a photography-focused cultural institution founded in 2010 by the Swedish brothers Jan and Per Broman, joins the popular Stockholm flagship and an outpost in Tallinn, Estonia. A London Fotografiska is under construction, and an expansion to Asia is in the works. All of this has been shepherded by chairman and majority investor Yoram Roth, a serial entrepreneur who has been involved in movie and music licensing, real estate and hospitality. 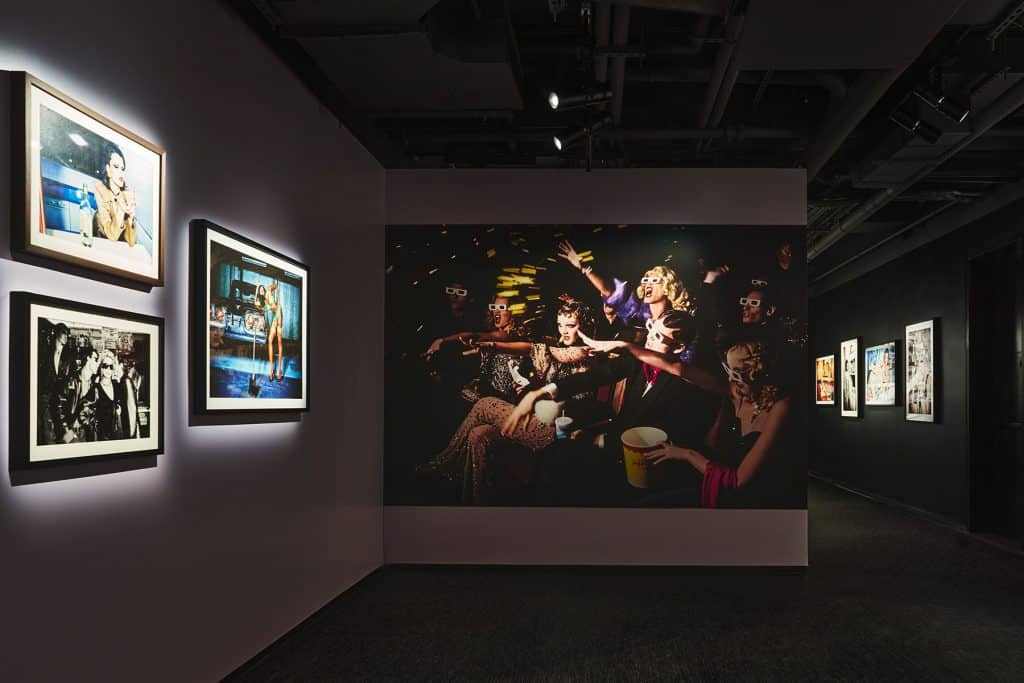 Booh!, New York (Metrograph Cinema), 2018, is one of the works by Ellen von Unwerth, known for her provocative fashion photography, that are on view until March 22.

As an institution that doesn’t take government funding and programs its shows with considerable input from its founders, Fotografiska isn’t a conventional museum. Earlier in their careers, the Bromans organized pop-up photography exhibitions, and an impresario’s touch defines all their multifunctional spaces.

“Currently, the museum world is defined in two ways,” Roth says. “One is the grand museum that collects for posterity. And then you have private museums, people who have built remarkable collections and captured a movement. We are a third way.” 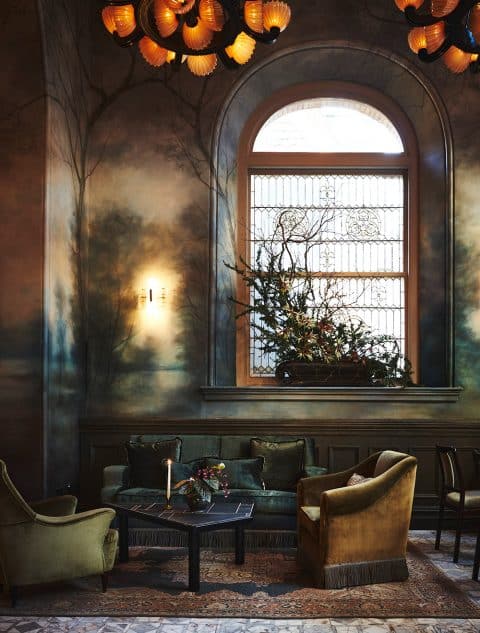 Fotografiska’s restaurant, Verōnika, was designed by Roman and Williams and is run by Stephen Starr.

Visitors to Fotografiska New York enter through an inviting shop and café, with a bar at one edge of the curved reception desk and photography books laid out on browser-friendly tables. One floor up, in a grand, double-height space with large arched windows, is the formal restaurant Verōnika, designed by the studio Roman and Williams and run by the well-known restaurateur Stephen Starr. Above this are three floors of exhibition galleries topped by a multipurpose, skylit room with a cathedral ceiling.

Fotografiska enlisted architecture firm CetraRuddy to renovate the structure, designed in 1894 by Robert Gilbert Wilson and formerly known as the Church Missions House. “Everything was in bad condition, so we had to build a new building inside the building,” Jan Broman says. The architects also had to design it to accommodate, and support, the movement of large numbers of people and artworks. In its former life as a Christian insurance company, Roth explains, the building “had a few people sitting at desks. We have hundreds of people coming up and down.”

In some places, however, they were able to show off the architectural bones. On the sixth and top floor, the renovation has exposed the original terracotta walls and opened up the ceiling all the way to the Flemish-style roof. The result is a soaring, yet intimate, space for events, including planned music performances, artist talks and book signings. 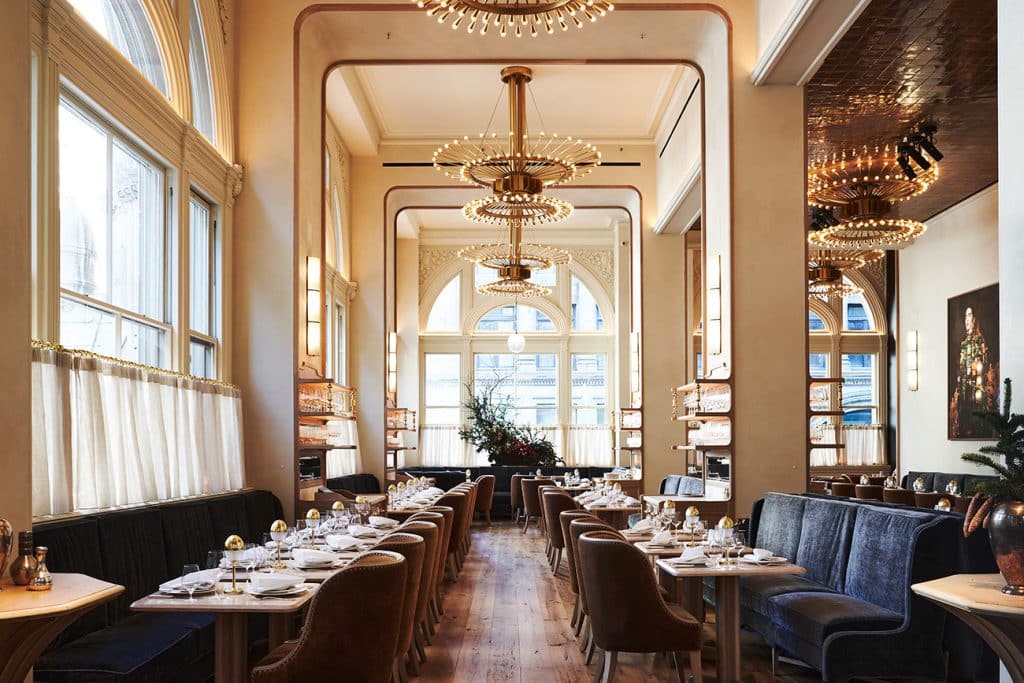 Downstairs in the restaurant, Roman and Williams created an opulent dining room inspired by Europe’s grand cafés and decorated with spectacular lighting fixtures, including a Baccarat Art Deco crystal chandelier, from Morentz, in the Netherlands; and a wall lamp by Hans Bergstrom for Ateljé Lyktan, from 1st Modern, in Sweden. Diners enter through the Chapel Bar, which has liquor bottles shelved against an enormous original stained-glass window, velvet-upholstered Danish mid-century dining chairs from Judy Frankel Antiques, in Michigan, and a mural of a misty forest.

“There are plenty of museums that have great restaurants,” Roth acknowledges, but at Fotografiska, “people can take a glass of wine and walk through the exhibitions.” Try doing that at the Whitney.

Bathtub, Naomi Campbell and Kate Moss (for Vogue US), 1996, by Ellen von Unwerth

The inaugural shows are international in scope and reflect diverse approaches to photography: the provocative fashion shots of Ellen von Unwerth (through March 29); Tawny Chatmon’s gilded, Klimt-inspired portraits of African-American women and children (March 22); Helene Schmitz’s landscapes revealing environmental degradation (April 12); the social-documentary work of Anastasia Taylor-Lind (March 8); the elaborately staged group portraits of Adi Nes (March 1). Many of the works involved are exhibition prints, although some are loans from private collections or the artists’ galleries.

The programming (overseen by director of exhibitions Amanda Hajjar, formerly of London’s Courtauld Institute of Art) will be about 70 percent “global” and 30 percent “local,” according to Roth. Although some exhibitions will tour among the different Fotografiska venues, those more engaged with American political themes may not. “We have some shows coming that cover reproductive rights, gun control, incarceration — those are topics that may not be as interesting to a Swedish audience,” he says. 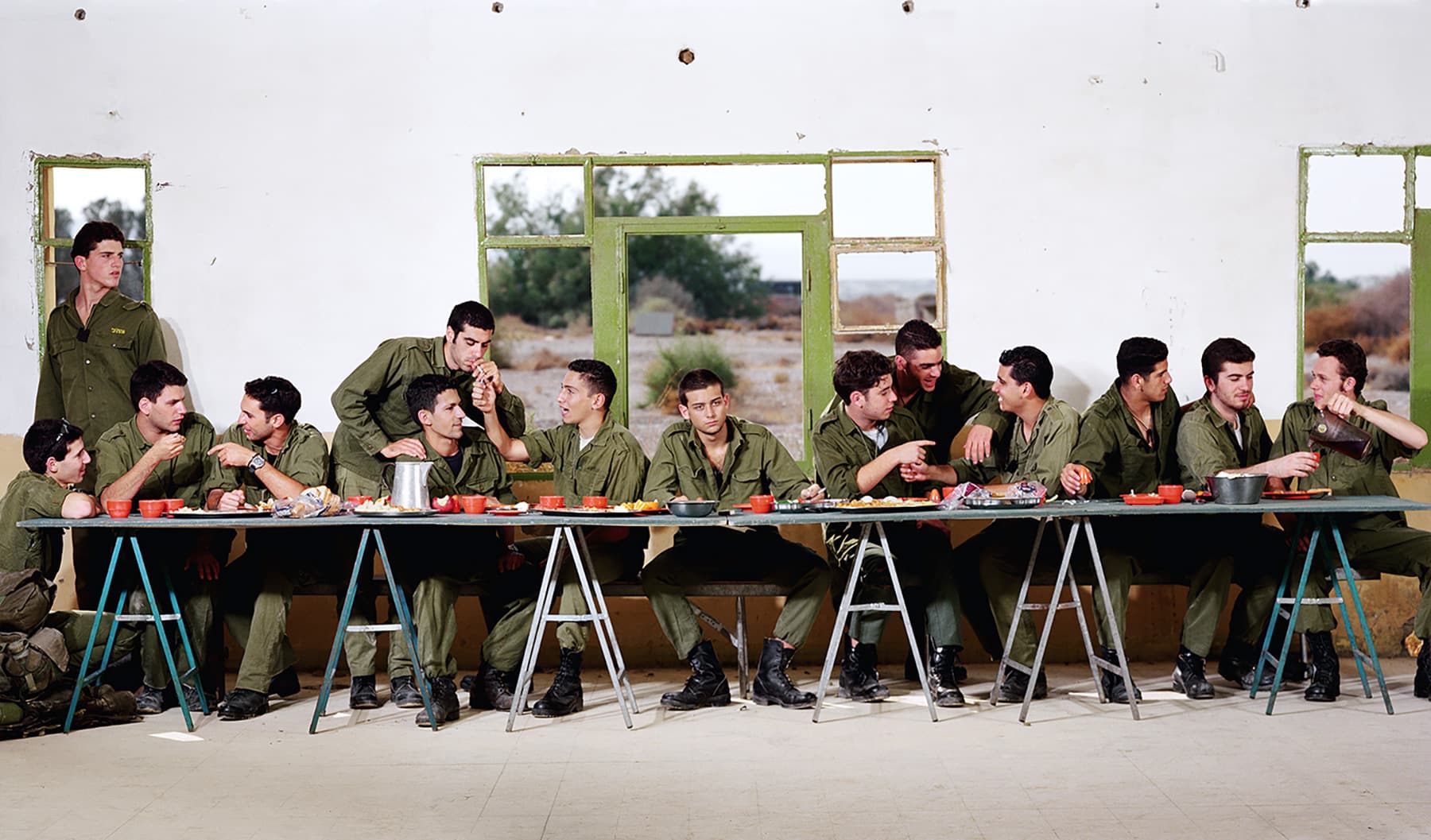 Untitled (The Last Supper before Going Out to Battle), 1996, by Adi Nes

Visitors to the different Fotografiskas may wonder what, exactly, it means to be a museum specializing in photography today, when audiences can make or interact with photos anywhere their phones are. Roth sees the medium’s ubiquity as an advantage. “Because we all have phones with ten thousand terrible images, we’ve come to appreciate the craft of photography much more,” he says. “Now, you understand when you are standing in front of a great photo. Ten years ago, everybody thought that if you just set the button combinations correctly, you can get a shot like that.”

At the same time, Fotografiska seems intent on challenging the exclusivity that often, in the art world, goes along with an emphasis on connoisseurship. One of the biggest differences between the New York Fotografiska and other local art venues, for instance, is the extended hours: It’s open until 11 p.m. or midnight, depending on the day. “From the start, in Stockholm, we had the idea that art should be accessible,” Broman explains. “Most people work during the daytime, and that means that you have to be open at night.” 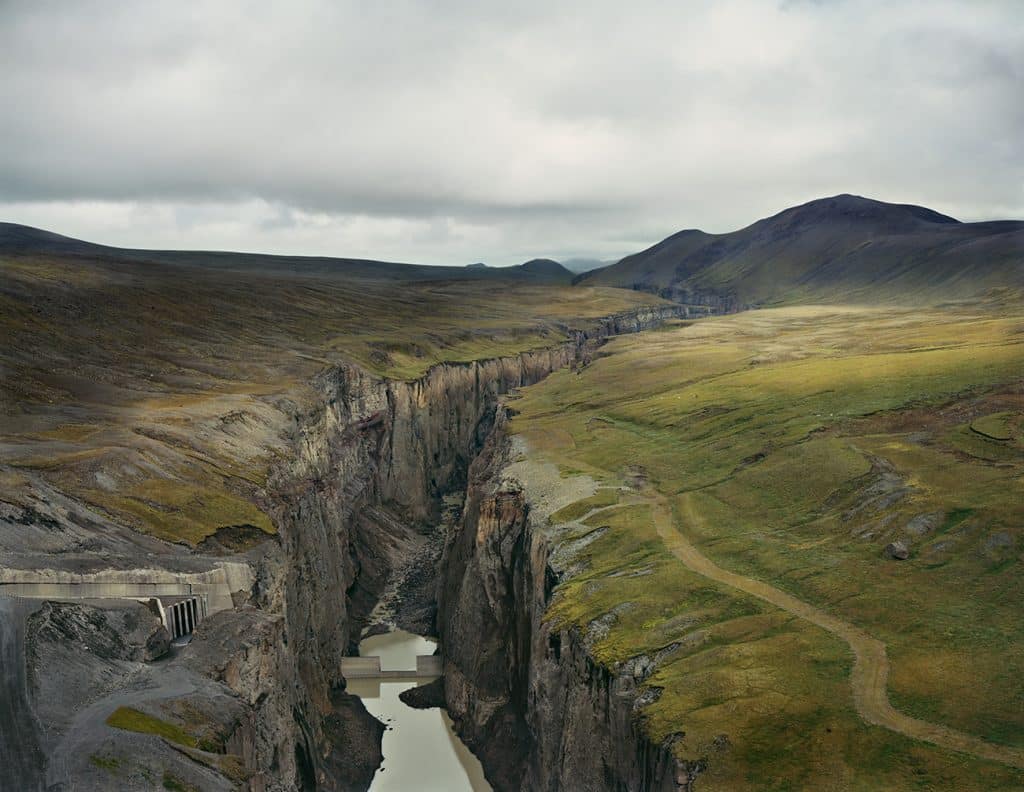 Aesthetics of Violence, 2017, by Helene Schmitz

As a general approach, Broman says, “we are trying to run the business with a lot of hospitality, which means getting people to see that they are not visitors — they are guests to us.” It should be noted that a trip to Fotografiska is slightly more expensive than to one of New York’s major museums: Admission is $28, with annual memberships offered at $150 and a still-hefty charge of $18 for students, seniors, and current and former members of the military. (Children under 12 are admitted for free.)

Of course, Fotografiska is not exactly trying to be a museum. “We look at it as an overall cultural experience,” Roth says. “The whole world has moved toward an experience economy. We see ourselves as the next wave of what a museum needs to be.” 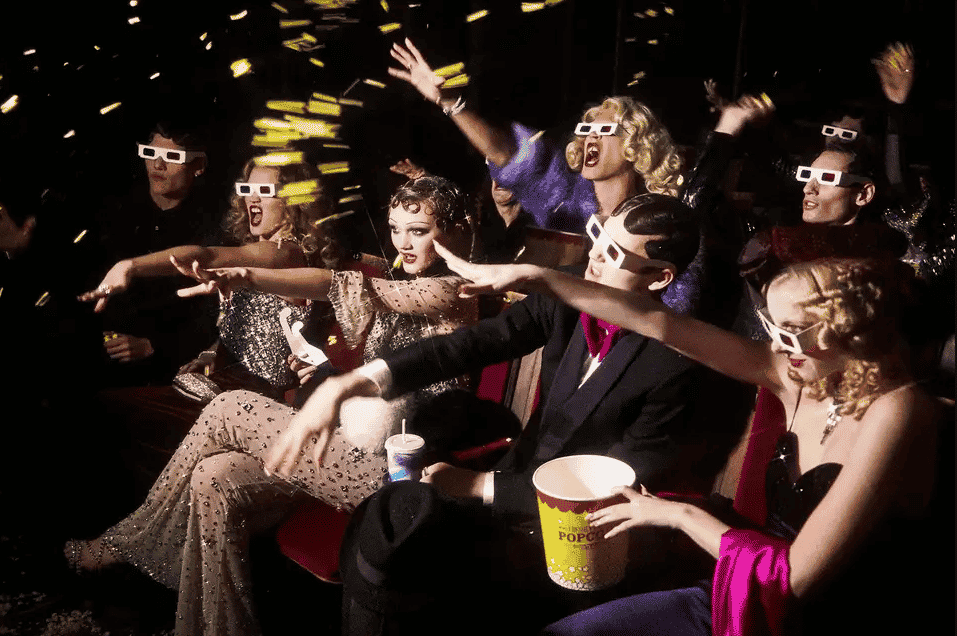 Browse Photography on 1stdibs
Shop All