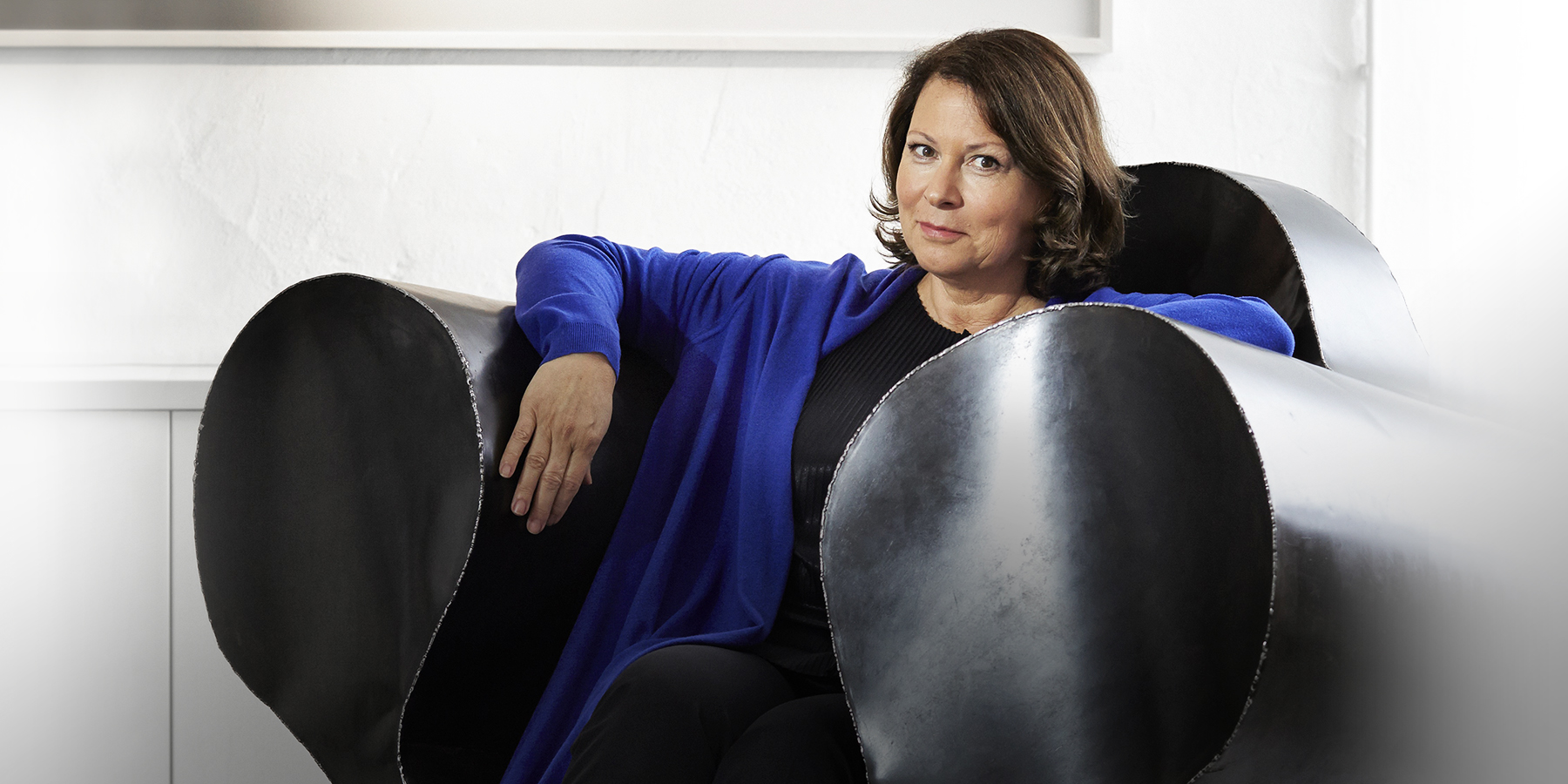 The Cologne-based gallerist Gabrielle Ammann has translated a passion for all things contemporary into a thriving business, dealing in the most of-the-moment art and design and working to cultivate the careers of creators both well-known and newly discovered. 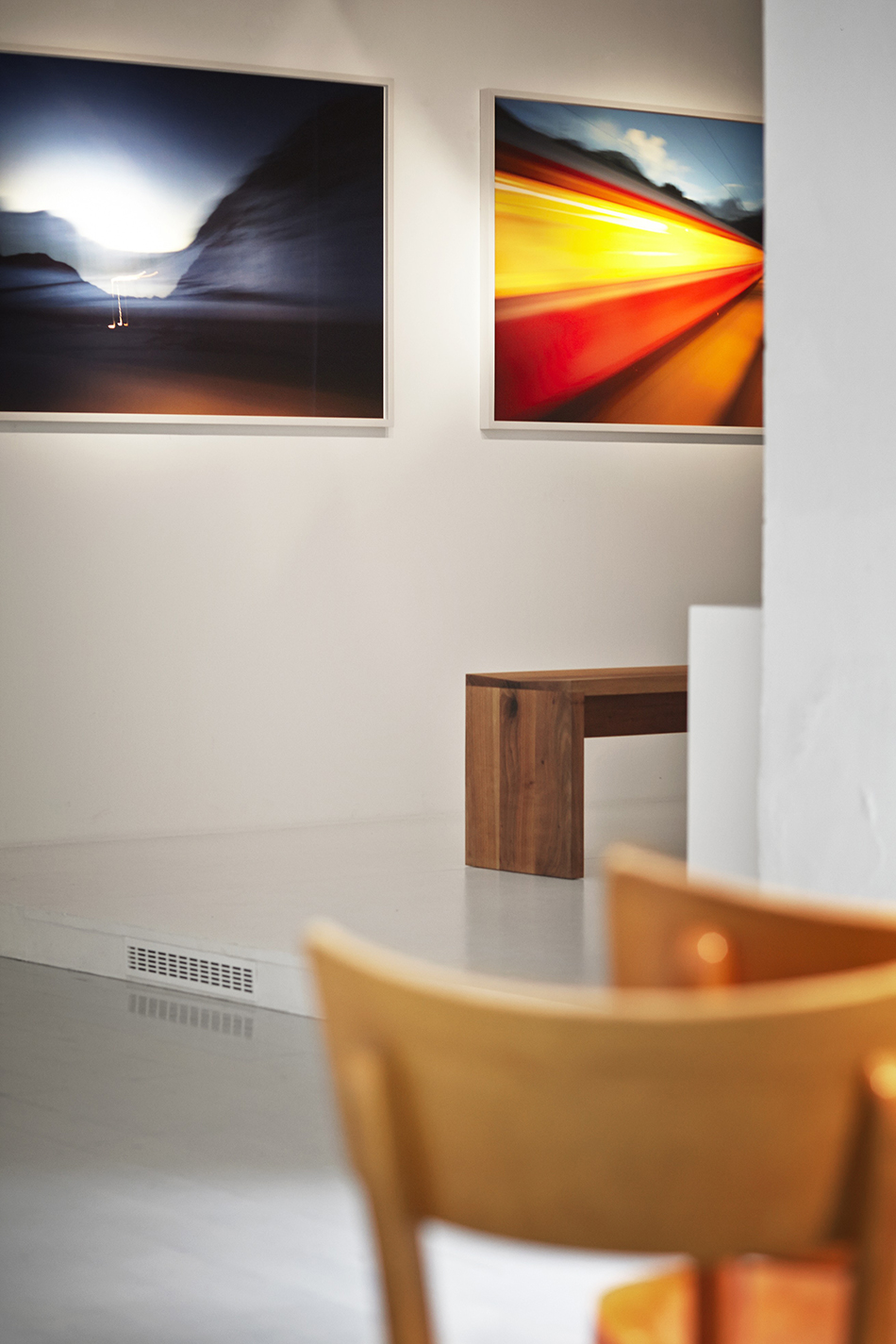 May 7, 2014Ammann Gallery in Cologne, Germany — opened in 2006 by Gabrielle Ammann, seen above sitting in Ron Arad’s Big Easy chair, 1994 — is currently staging a show of work by multidisciplinary artist Rolf Sachs, which includes photos from his 2013 “Camera in Motion” series, shot from trains in the Swiss Alps. Photos by Arne Jennard

I’m a bit of a chair freak,” says Gabrielle Ammann, “which makes our house good for parties – there’s always somewhere to sit.” At any given gathering, you might find polished aluminum examples by Marc Newson; a cushion-less, minimal bent-wire piece by Forrest Warden Myers; or a resin-and-reclaimed-wood bench by the Italian collective Nucleo. All of those and more are shown at her Ammann Gallery, in Cologne, Germany, alongside Hélène Binet‘s dramatically lit photographs of architecture and landscapes; sculptural lighting by Ingo Maurer and Johanna Grawunder; and low, chunky metal tables by Shi Jianmin. “One of my designers recently asked me why I don’t have any old pieces in my house. It’s not that we don’t have a cozy home; it’s just that I like new materials. I’m absolutely contemporary.”

That approach has defined Ammann’s career. She was one of the first galleries in Europe to show Newson’s pieces, and she promoted both his and Ron Arad‘s careers in the 1990s. She has worked with established names like Zaha Hadid, as well as such emerging global talents as Indian-born, Amsterdam-based Satyendra Pakhalé, known for his witty combinations of craft and technology.

Crucially, Ammann sees no firm divisions between the categories of art and design, and her gallery’s program reflects that openness, with many of the names on her roster not confining themselves to one medium, genre or artistic approach. Ammann has shown Beijing-based Wang Jin‘s photographs critiquing Chinese society, but he’s also a performance artist, and Chinese sculptor Shi Jianmin makes gestural abstract paintings as well as three-dimensional, functional pieces in steel. Also taking a multidisciplinary approach is the Swiss-born Rolf Sachs, a former banker who’s now a photographer, a designer of conceptual furniture and a maker of art objects. Sachs, with whom the dealer has worked since 1994, currently has a photography show called “Camera in Motion” at Ammann’s gallery, as well as a crowd-pleasing exhibition, “Typisch Deutsch? [Typical German?],” which has been extended at the nearby MAKK Museum through June 9.

Growing up in Basel, Switzerland, Ammann was surrounded by fine and decorative art, although nothing quite as cutting-edge as what she shows now. She recalls that her mother had an interest in art and a flair for interior design, inventively combining Biedermeier furniture with other more modern pieces. “She was always moving furniture around the house,” Ammann says. “You’d come home, and everything would be different.” Ammann studied art history and German literature at university, then moved to Germany and earned a degree in interior architecture. By 1989, she and an architect partner established Designer’s Interiors, which created public spaces, private residences and exhibition designs.

In tandem with that, she launched Designer’s Agency, which she labels a “forum or platform” for presenting projects in various venues around Europe. “I tried to make it more of a cultural agency,” she explains. Among the first work she promoted was that of the Milan-based Studio Alchimia, the influential postmodern design group formed in 1979, whose creations she first encountered on a trip to Italy to visit a friend who worked for the studio. “It was so completely different from what I had seen before,” says Ammann of Alchimia’s inverted geometric stacks, bright colors and minimally functional pieces. “It wasn’t really a furniture business for them. From their point of view, it was art. They started a revolution. It was all very shocking, and I just thought it would be fun to sell those pieces in Germany.

“I’m a bit of a chair freak, which makes our house good for parties – there’s always somewhere to sit.”

Around the same time, she met Nils Holger Moormann, a Bavarian design furniture producer. “I told him I wanted to work with Alchimia in Germany, and he said, `Well, good luck.’ ” Although Moormann was skeptical that conservative German buyers would be receptive to the unconventional pieces, “he did tell me some people who might want to buy it,” says Ammann. 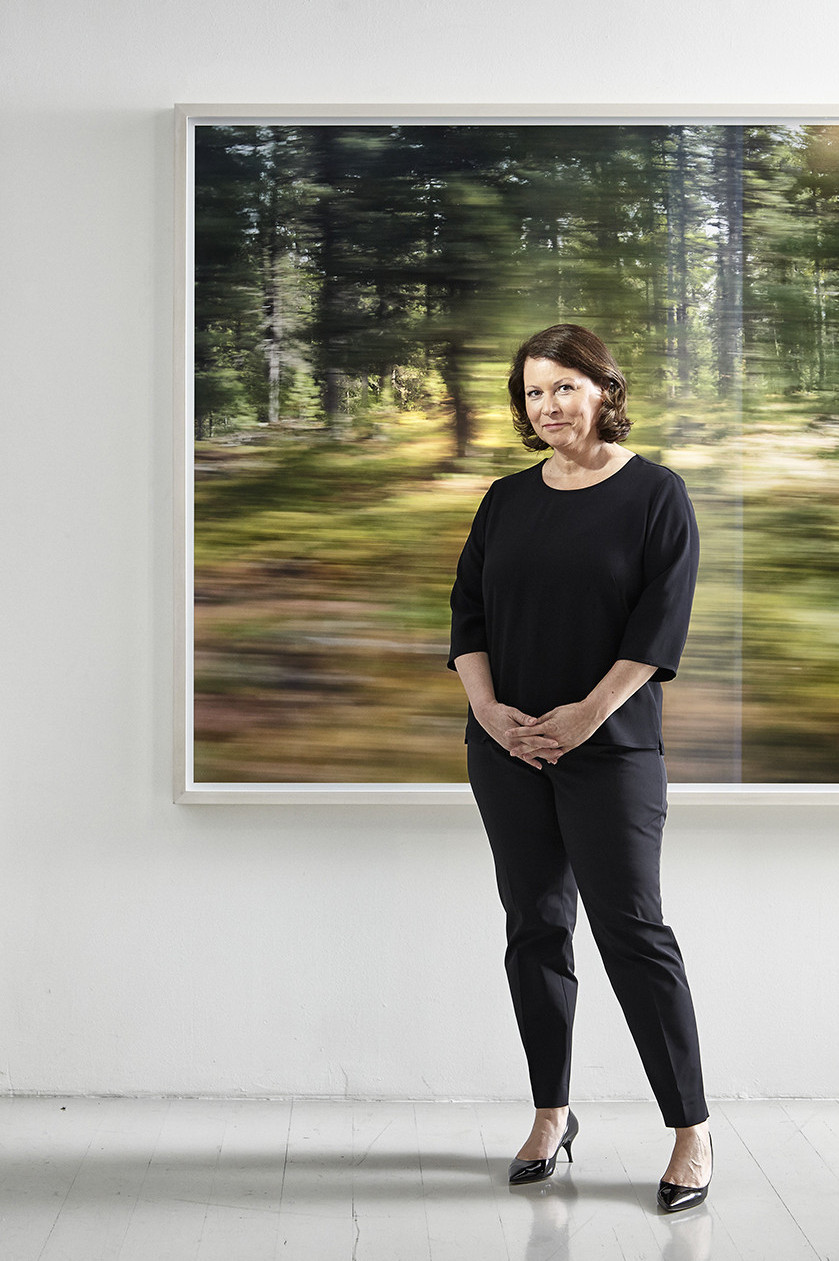 She placed the pieces in high-end furniture stores in a few major German cities. “I was lucky because some quite intellectual shop owners said yes.” The roving model worked for a time, and Designer’s Agency produced shows of Arad, Newson and others at various venues, but the next logical step, she says, “was to create a space on my own where I could show the programming I wanted.” And so she opened a showroom in Cologne in a former printing house, a space with high ceilings and an industrial look that appealed to her. Still, she didn’t think of it as a proper gallery, with regular hours and a set program. But one day, she recalls, “I was sitting there at my huge Ron Arad table, and a very nice client from Düsseldorf came in and said, `Gabrielle, you have a wonderful space, and this is a city for galleries. Now is the time to open one.’ So, I thought, `Why not?’ In some ways I was already doing it without calling it a gallery.”

In January 2006, she rebranded the Cologne space as Ammann Gallery. “I had fantastic timing without really knowing it,” she says. A few months later, the Design Miami fair made its debut in Basel, creating a surge in the design market. “Like so much in life, it’s not just about ideas,” says Ammann. “It’s about timing.”

The Design Miami/Basel fairs have become key events in her calendar, particularly the Florida version. “It’s a really good fair for us,” she says. “It’s important to build up the U.S. market.” Further to that end, this week, from May 8 to 11, stateside buyers will find Ammann at the second edition of the Collective design fair in Manhattan. There she’ll have works by Sachs, as well as pieces by Zaha Hadid, Studio Nucleo, Shi Jianmin, Hélène Binet and Florian Borkenhagen, known for his sly adaptations of found and recycled pieces.

Naturally, many of these designers’ works can also be found on her 1stdibs storefront. “The internet business has changed everything. When you buy from a gallery, it’s different,” says the ever forward-thinking dealer. “For me, it is very exciting to work with both platforms. I’m for the future.”

Gabrielle Ammann shares her thoughts on a few choice pieces.