She's a national treasure with impeccable taste, and her authentically sophisticated designs have captivated clients on both sides of the Atlantic. 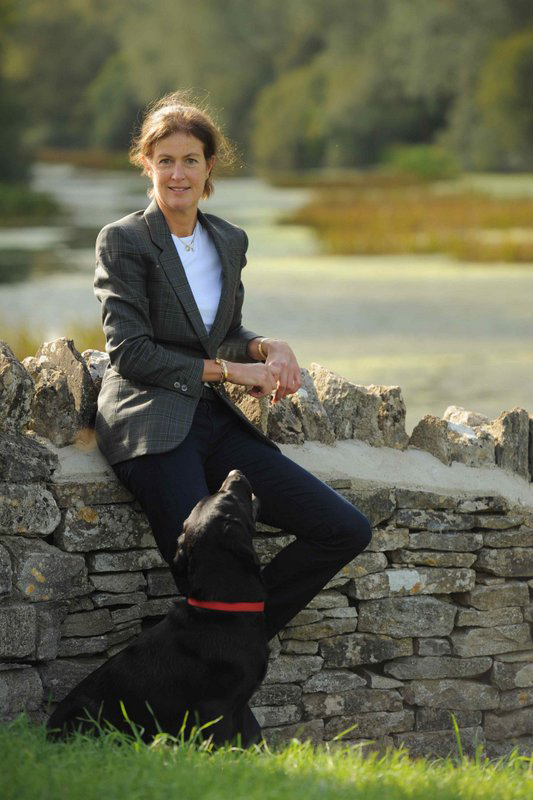 January 23, 2013Author and interior decorator Henrietta Spencer-Churchhill leans on a fieldstone wall with her black Labrador, Bugsy. Top: The double-ended drawing room of the Scotland house features a generous bow window and wood-plank floors. All photos by Christopher Drake unless otherwise noted.

As the granddaughter and daughter of the two most recent Dukes of Marlborough, Henrietta Spencer-Churchill is steeped in English country house heritage. Her family seat, the magnificent Blenheim Palace, near Oxford, is regarded as one of the most important baroque houses in the country — and, incidentally, the only one to hold the title “Palace” though it is neither royal nor Episcopal. Reserved and modest, Spencer-Churchill does not shout her aristocratic roots from the rooftops or make professional use of the title “Lady.” But what the acclaimed interior decorator will say is, “I have always loved architecture, architectural detailing, furniture and antiques. I was lucky enough to be brought up in beautiful surroundings, and I suppose that must have had a huge influence — it sort of fed into me through a process of osmosis.”

Not surprisingly, Spencer-Churchill has become the doyenne of classic English style, a status cemented by her considerable reputation as an author of design history. She says that people do not come to her for a predetermined look, but for her deep understanding of historical references within interior design. “Many of my clients love English style, and they know they will get the genuine article here, rather than a pastiche,” she explains. “Having said that, we are very fluid and adaptable depending on the style of the house and the client.”

She believes that English decoration should be understated, allowing the spirit of the house and its architectural details to dominate. “If you have good furniture and works of art, I like to make them the focal point,” she says, “The furnishings should be comfortable and elegant but secondary.” 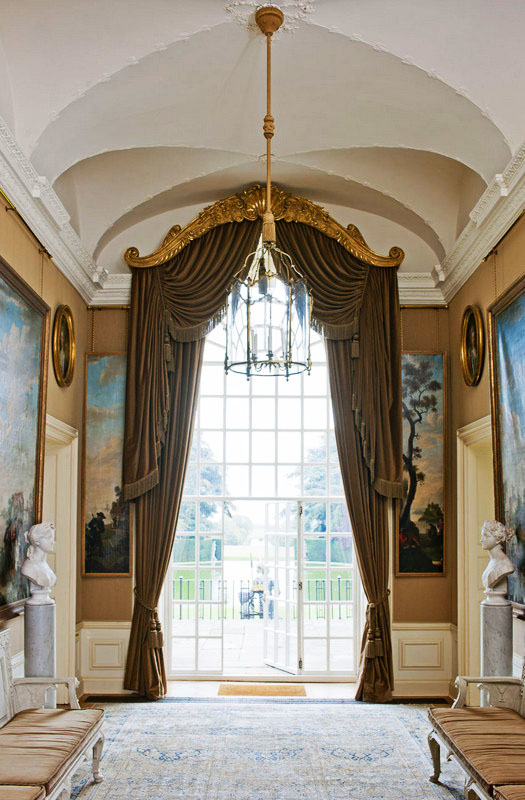 The ornate hallway of an early-18th-century house in England’s Northamptonshire embodies the classically English style of Spencer-Churchhill.

We meet in the West London studio where she runs her many international projects; she also keeps a studio and shop in Woodstock, the Oxfordshire village closest to Blenheim Palace, where she caters to a more local, countryside clientele. At each studio, she employs four full-time designers, with regular freelance help brought in when needed. There is nothing grand about Spencer-Churchill: Relaxed and welcoming in jeans and a pale blue shirt, she makes my tea herself before leaving her two dogs (Bugsy, a Labrador, and Bounty, a terrier) in her office so we can talk in a quiet corner.

It has now been 32 years since she founded her own design practice. As a young woman, she studied art history in both Paris and Florence before returning to England to take a course in interior design at the Inchbald, London’s premier school of design. “I read the prospectus, and it encompassed everything I was interested in,” she recalls. “I had wanted to be an architect originally, but back then the focus was on commercial projects, and that was not for me. The Inchbald course brought together antiques, color, fabrics and architectural detailing. I absolutely loved it.”

Her first job was working for Diana Hanbury, who ran her interior design studio, The Tarrystone, from the picturesque town of Chobham, in Surrey. Hanbury was known for her classic style and collaborated often with Jean Monro, renowned for her English chintzes and other archive prints. Spencer-Churchill remembers day one with absolute clarity. “My first assignment was to go to measure the windows of an apartment,” she says. “I had absolutely no idea which measurements to take — outside the window or in? — so I was there most of the day measuring every single possibility,” she says, laughing. “The course at the Inchbald had covered a lot of ground, but they had never taught us something so hands-on.” Under Hanbury’s tuition, Spencer-Churchill soon found her wings and before long was running the London arm of the business. 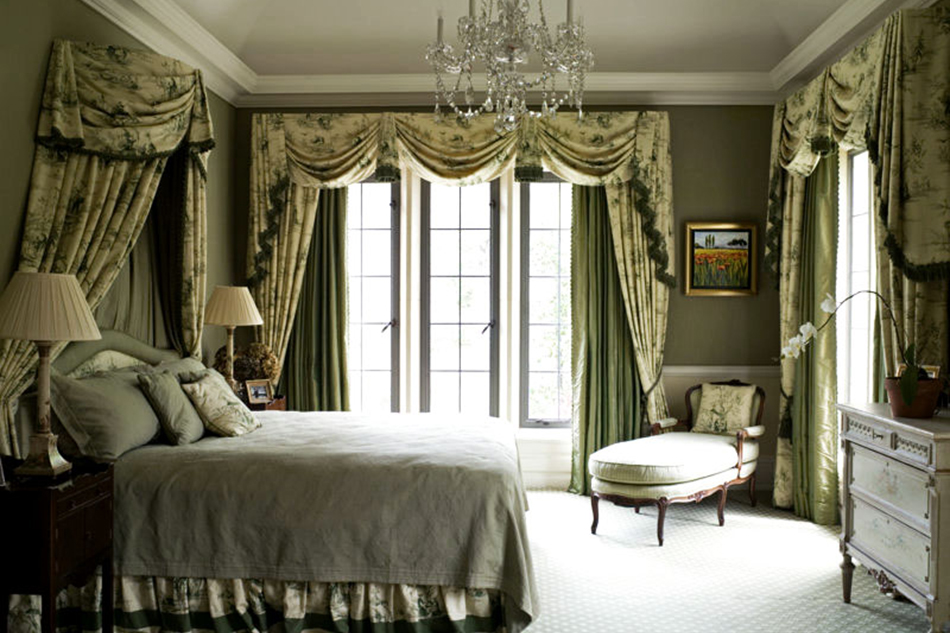 Spencer-Churchill’s projects extend to the United States, including Atlanta, where she outfitted a new house’s guest bedroom with silk walls and Toile de Jouy curtains. 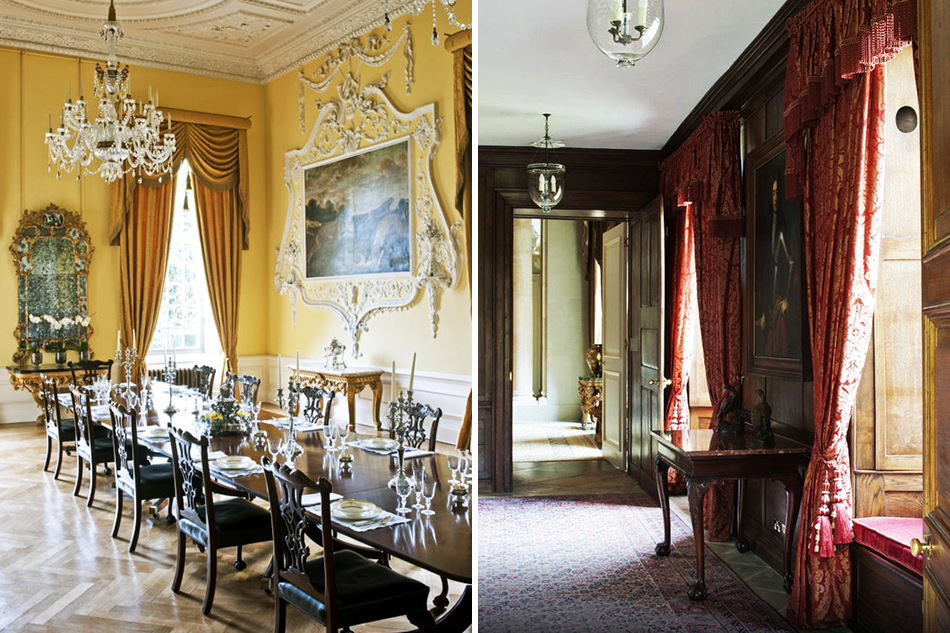 Left: In the dining room of the Northamptonshire house, Spencer-Churchill restored the floor and commissioned new chandeliers based on the originals. Right: Light pouring into the back hall of the house in Northamptonshire illuminates the newly installed antique paneling. 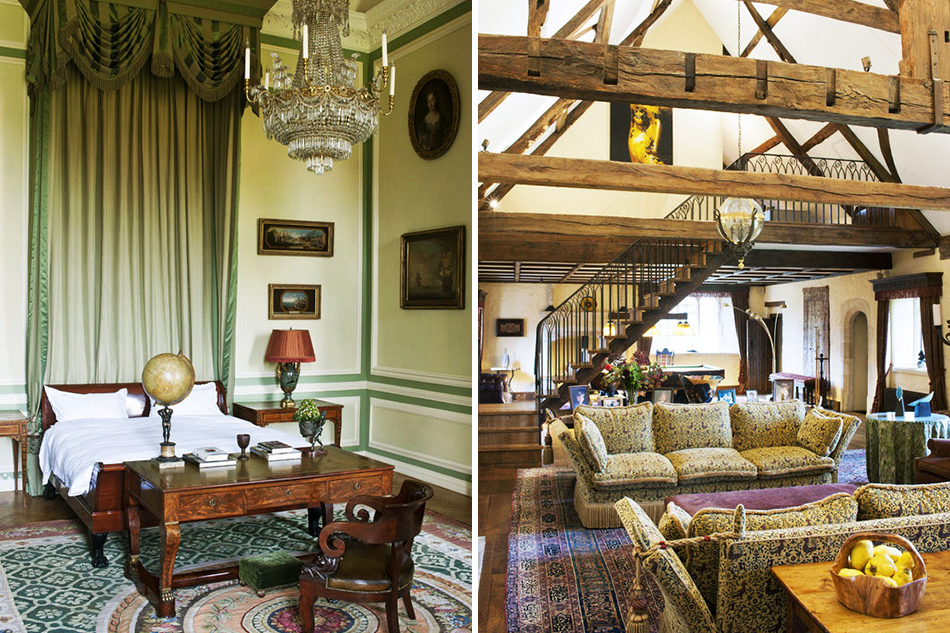 Left: Spencer-Churchill combined painted paneling and antique furniture in a grand Regency-style bedroom in Northamptonshire. Right: The family room in the Tudor wing of a multiperiod house in Oxfordshire features a new staircase leading up to a study. 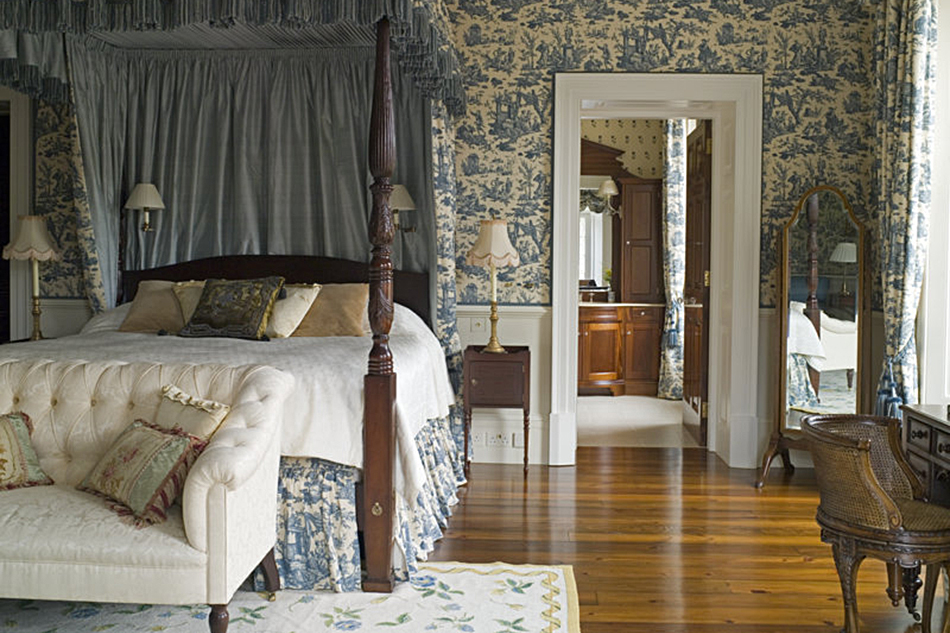 A guest bedroom in the Scotland house is bedecked in blue Toile de Jouy fabrics and wallpaper. 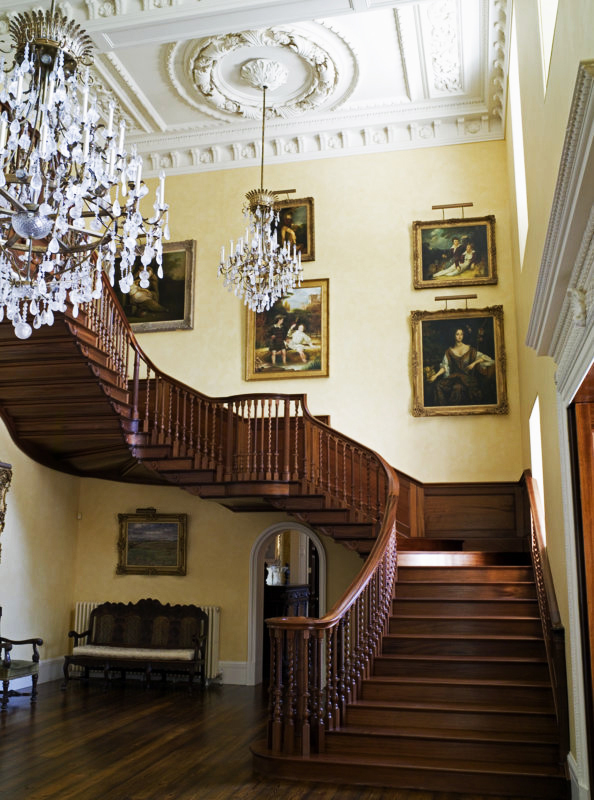 By 1981, she was married, to banker Nathan Gelber (the couple has since divorced), and she had her first son, David; her second, Maximilian, followed four years later. She needed a business that she could combine with motherhood and an interiors shop seemed the best solution, so she duly set up Woodstock Designs in its namesake town. At the time, she was living, as she does now, between London and a house on the Blenheim estate. “It made sense to open a shop near my home,” she says, “particularly as there was nothing like it in the area at the time.” She found a partner to take on the day-to-day running of the shop, leaving her able to concentrate on the creative side of the business.

From the first, her projects were divided between the country and London. Then, in 1990, she wrote her first book, the best-selling Classic English Interiors, which opened up more international opportunities, particularly in North America, where she has designed numerous houses in cities such as New York, Atlanta and Dallas. “Writing books gave me a voice and cemented my reputation on both sides of the Atlantic,” she explains.

What sets her books apart and has earned her a loyal readership over the years is their blend of historical research, decorating expertise and lavish photography. She has taken particular ownership of the word “classic” — as in Classic Decorative Details, Classic Fabrics and Classic English Interiors, to name a few of her popular titles — striking an authoritative tone that accompanies sumptuous images of real period homes. In 1997’s Classic Georgian Style, for example, she takes the reader on a tour of some of England’s most beautiful Georgian and Regency houses, illustrating the design trends that flowed from this era. (The Georgian period particularly resonates in her design work.) In Classic Interior Design, from 2009, she examines enduring decorative styles from the baroque to the late 19th century on both sides of the Atlantic, focusing on architectural and furnishing details. In all, she has written 11 books, the most recent being The Life of The House: How Rooms Evolve, published by Rizzoli in 2012. 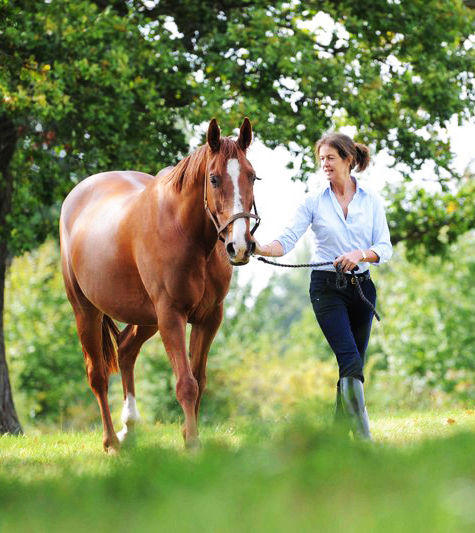 The decorator walks her horse, Bertie. (photo by John Millar)

Now in her fourth decade of business, she remains as in demand as ever — not least to a global clientele for whom English decorating is the pinnacle of good taste. Current projects include a large country villa in Poland; a period apartment in Vienna; a major new-build on Jersey, the largest of the Channel Islands; an apartment in Dallas; another in Dubai; and a whole raft of London and country house commissions.

Licensing deals include furniture for the classic-with-a-twist brand Maitland-Smith and a collection of hardware for the Iron Door Company. Soon she will launch a line of rugs for Loloi in the U.S.

Travel dominates her busy life, but when not visiting current projects she tries to spend Mondays and Fridays at her Woodstock shop. Weekends see her at her idyllic Georgian farmhouse on the Blenheim estate, where she walks Bugsy and Bounty, rides her horse, Bertie, and labors at her vegetable garden. The rest of the week, she can be found in her London house and office — the yang to the yin of the country. She says she dreams of scaling back enough to free up more time for other pursuits, but it is evident she has lost none of her core enthusiasm for the profession. “I love seeing a new project for the first time,” she says. “It is that moment of ‘Wow, let’s do something fantastic!’” 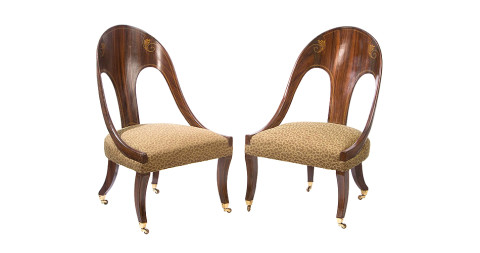 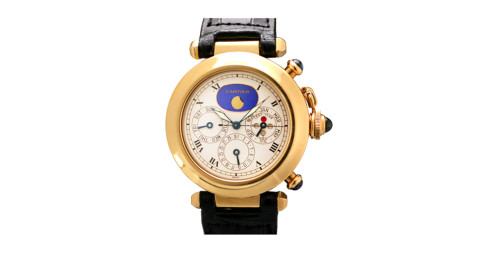 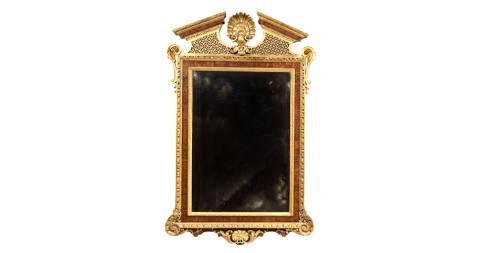 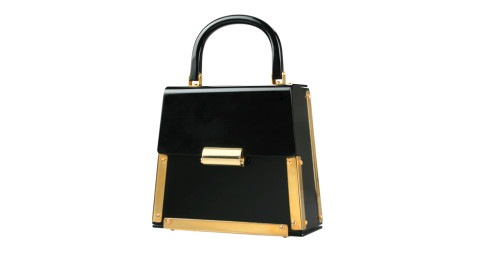 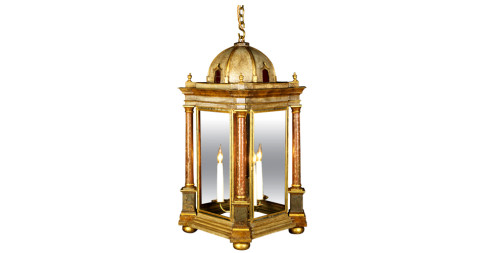 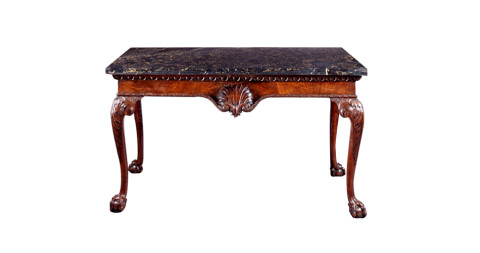