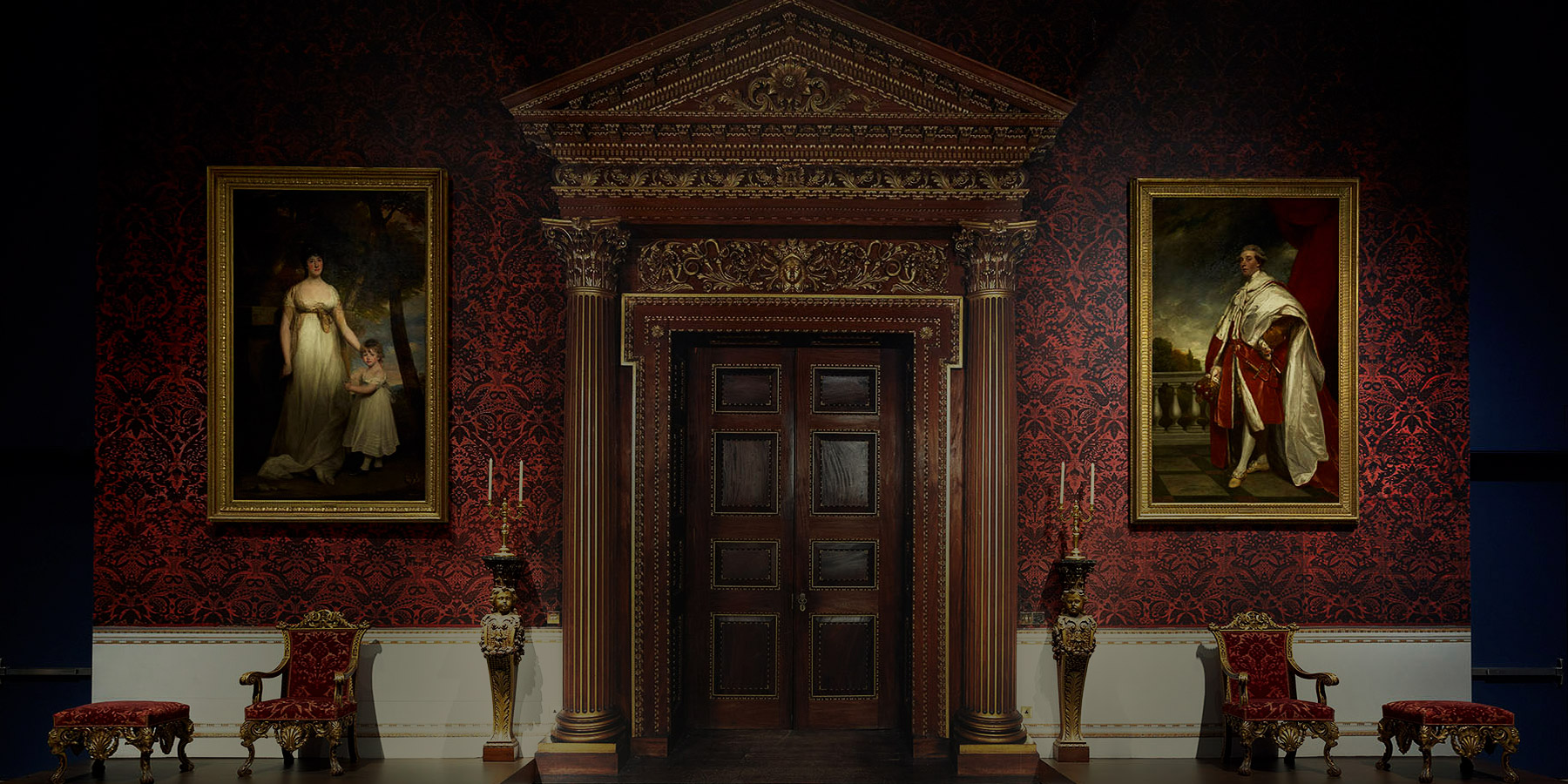 Houghton By Way of Houston

The storied 18th-century British estate Houghton Hall— whose interiors were designed by William Kent — has, for the first time, lent its priceless collection of paintings, sculptures and decorative arts to the United States, where they will travel from Houston to San Francisco and Nashville. 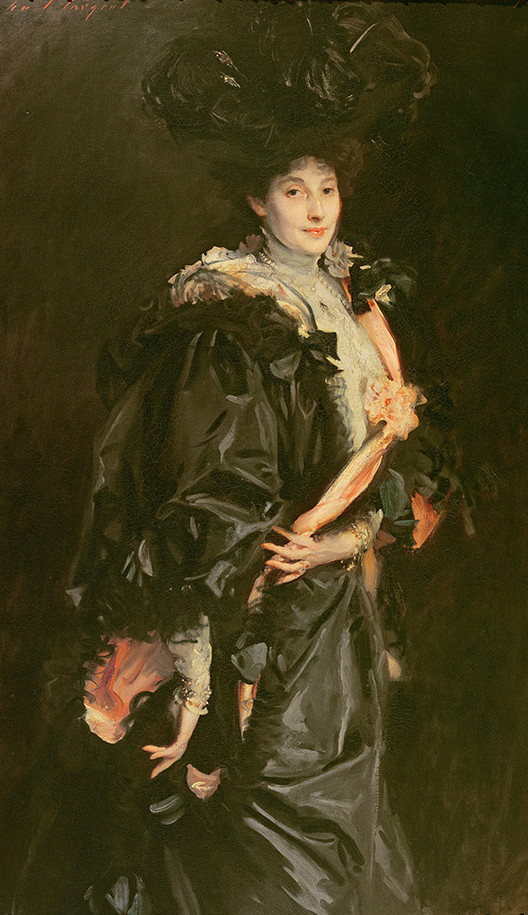 John Singer Sargent’s Portrait of Lady Sassoon, 1907, is one of the prized pieces hanging in the traveling “Houghton Hall” exhibition, featuring many items on view for the first time in the U.S. (photo courtesy of Bridgeman Art Library). Previous page: The show in its current home at the Museum of Fine Arts, Houston. Photos courtesy of the MFAH except where noted

For the first time ever, the renowned collection of paintings, sculptures and decorative arts from Houghton Hall, a grand estate with a storied and quirky past in Norfolk, England, has traveled to the United States. “Houghton Hall: Portrait of an English Country House” is now wrapping up its popular summer run at the Museum of Fine Arts, Houston (it closes September 21). Next it will head to San Francisco’s Legion of Honor museum (October 18 to January 18, 2015), followed by the Frist Center for the Visual Arts in Nashville (February 13 to May 10, 2015).

Houghton was built in the 1720s by Whig MP Sir Robert Walpole, whose political machinations and impeccable taste won him such favor with Georges I and II that he is referred to as England’s first prime minister, a post that didn’t even exist then. Determined to dazzle, Walpole built the sumptuous manor on the site of a humble family home, sparing no expense when filling it with the finest objects. Fabled architects James Gibbs and Colen Campbell designed what today is considered one of the world’s finest examples of classical revival Palladian architecture; the equally eminent William Kent designed the interiors. The estate was “a temple to [Walpole’s] dynasty, to his name, but most of all to his collection,” according to Houghton Hall curator, Thierry Morel. “He didn’t buy the pictures to fill the house. He created the collection, then he built the house around it.”

The exhibition shows key pieces from this collection, displaying them against scrims that have been illusionistically printed to replicate the interior of the estate. The nearly 200 works include paintings, porcelain, sculpture, costumes, metalwork and furniture. Highlights are family portraits by William Hogarth, Joshua Reynolds and John Singer Sargent; several dozen pieces of Sèvres porcelain; rare R. J. & S. Garrard silver objects; and dazzling one-of-a-kind furniture by the incomparable Kent. (While most of these items have been on view to visitors of Houghton Hall in the past, some were kept behind closed doors.)

“Robert Walpole didn’t buy the pictures to fill the house,” says curator Thierry Morel. “He created the collection, then he built  the house around it.” 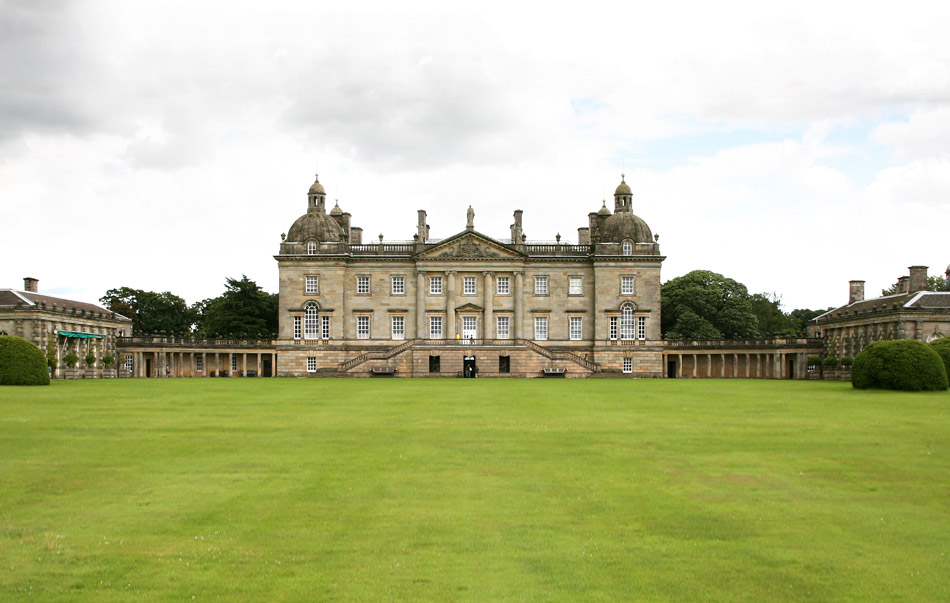 Houghton Hall is considered a premier example of Palladian architecture, a style that experienced a renaissance in England during the 18th century. Photo © Houghton Hall, Norfolk 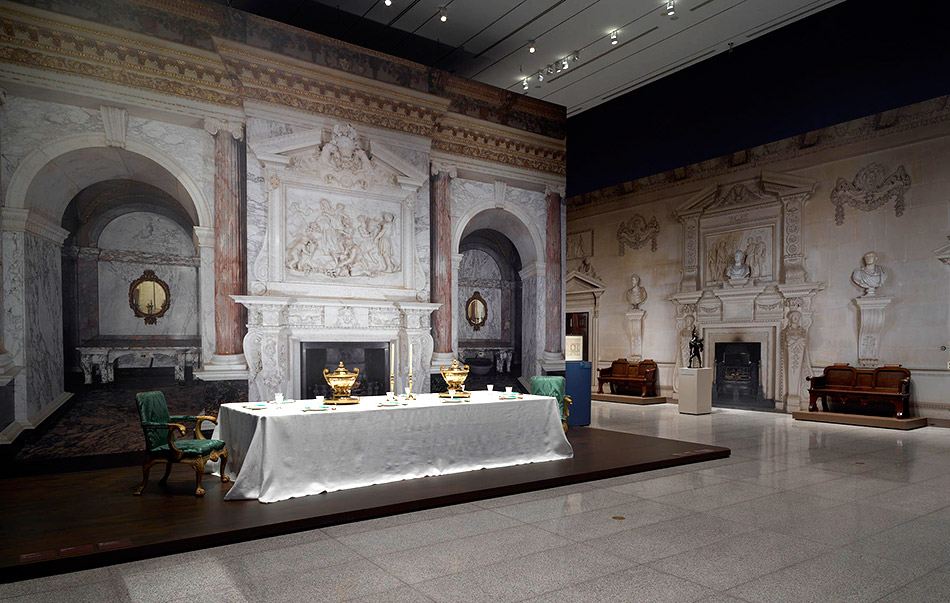 The exhibition displays decorative objects, furniture and art against scrims printed with detailed imagery to mimic the interiors of Houghton Hall. 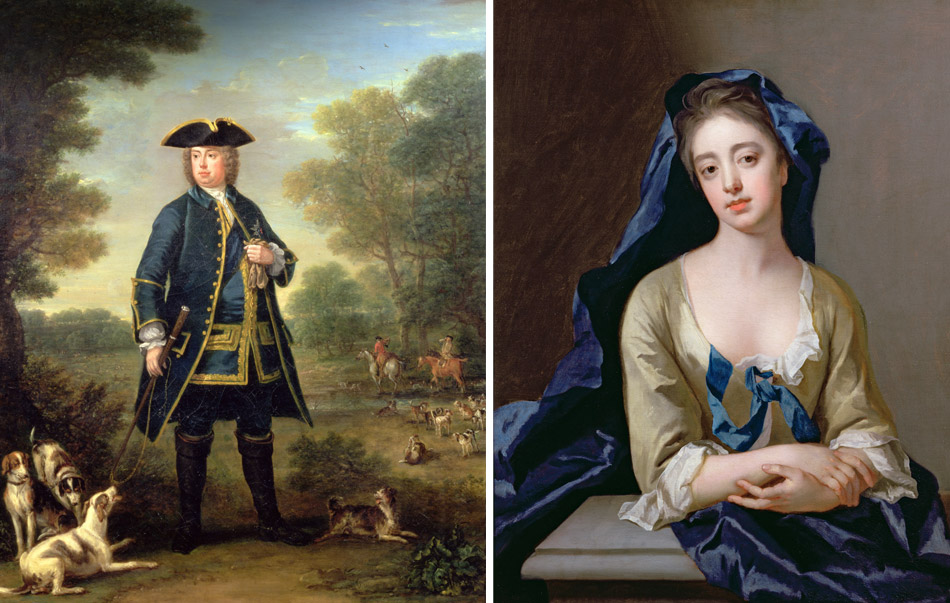 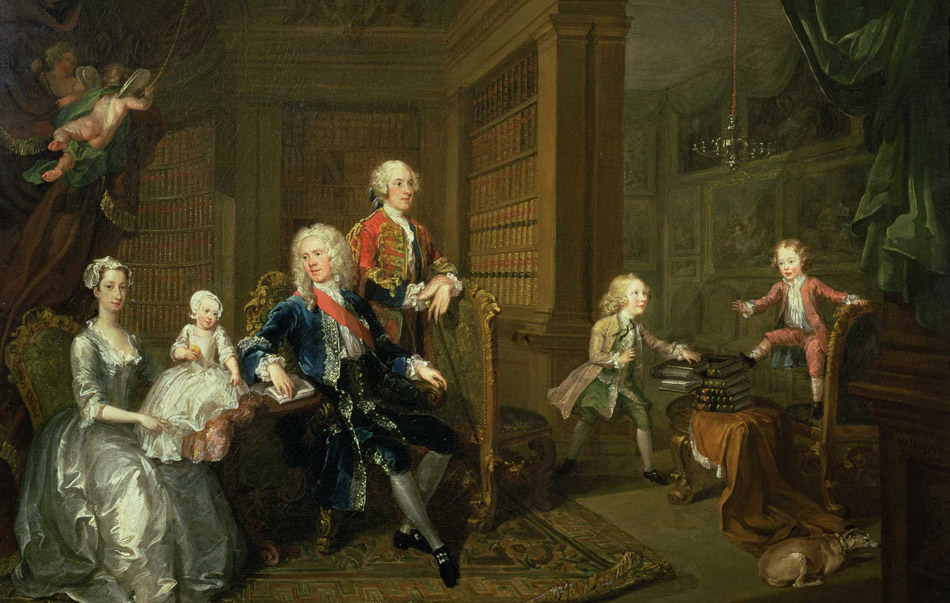 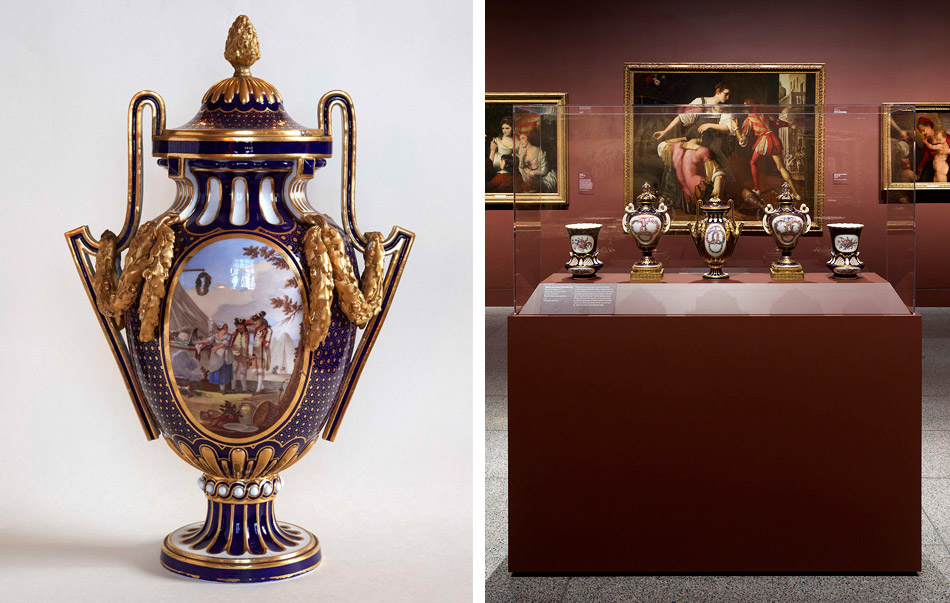 Among the rich array of items on display are more than a dozen pieces of Sèvres porcelain, including, left, a vase from the 1760s whose distinctive deep-blue glaze is known as bleu nouveau (vase photo by Pete Huggins). 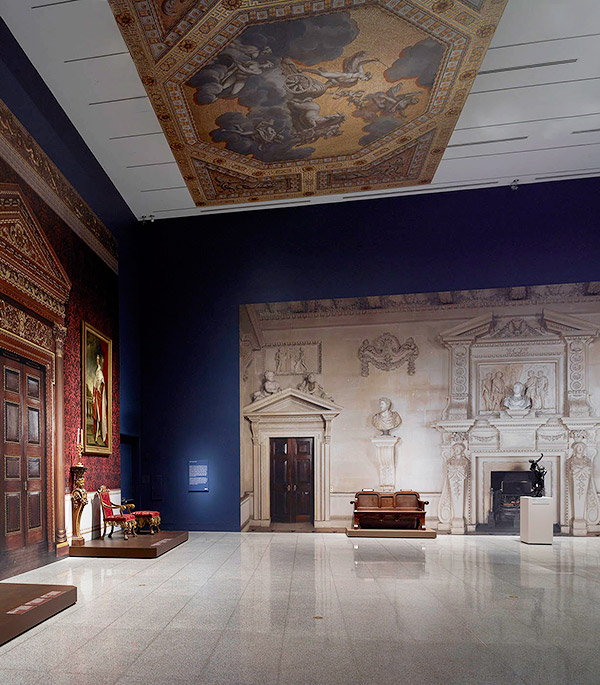 The installation includes a facsimile of a wall in the estate’s Stone Hall, the center of the house, designed by the eminent architect William Kent.

As we know, every Downton Abbey has its ghosts. Following his wife’s death in 1737, Walpole married his longtime mistress, Maria Skerritt, in 1738; she died soon after, just as his political and financial stature began to decline. Upon his death in 1745, Walpole owed 40,000 pounds — that’s about 800 million dollars today — most of it from his Houghton project. His son Robert sold other properties to ward off creditors. Robert’s son, George, described as a gambler given to “bouts of insanity,” did the unthinkable: In a sale organized by James Christie, a young and then-unknown auctioneer, he sold off one of the day’s most important caches of English fine art to a voracious Catherine the Great.

The good news is that countless other treasures were never sold. The vagaries of fortune kept the estate shuttered for much of the last 200 years; unused and protected from natural light, these objects and artworks remained in pristine condition.

The Houston debut is said to have been made possible because of the close ties between the museum’s director, Gary Tinterow, and David Cholmondeley, the Seventh Marquess of Cholmondeley, a descendant of Walpole and Houghton’s current owner, who inherited his title and the property in 1990 and lives there with his wife and young twin sons. If the shenanigans of the Marquess’s famous ancestor or his interactions with major moments in British history don’t draw you to this exhibition — either in Houston or at points beyond — then its jaw-dropping objects of timeless beauty surely should.