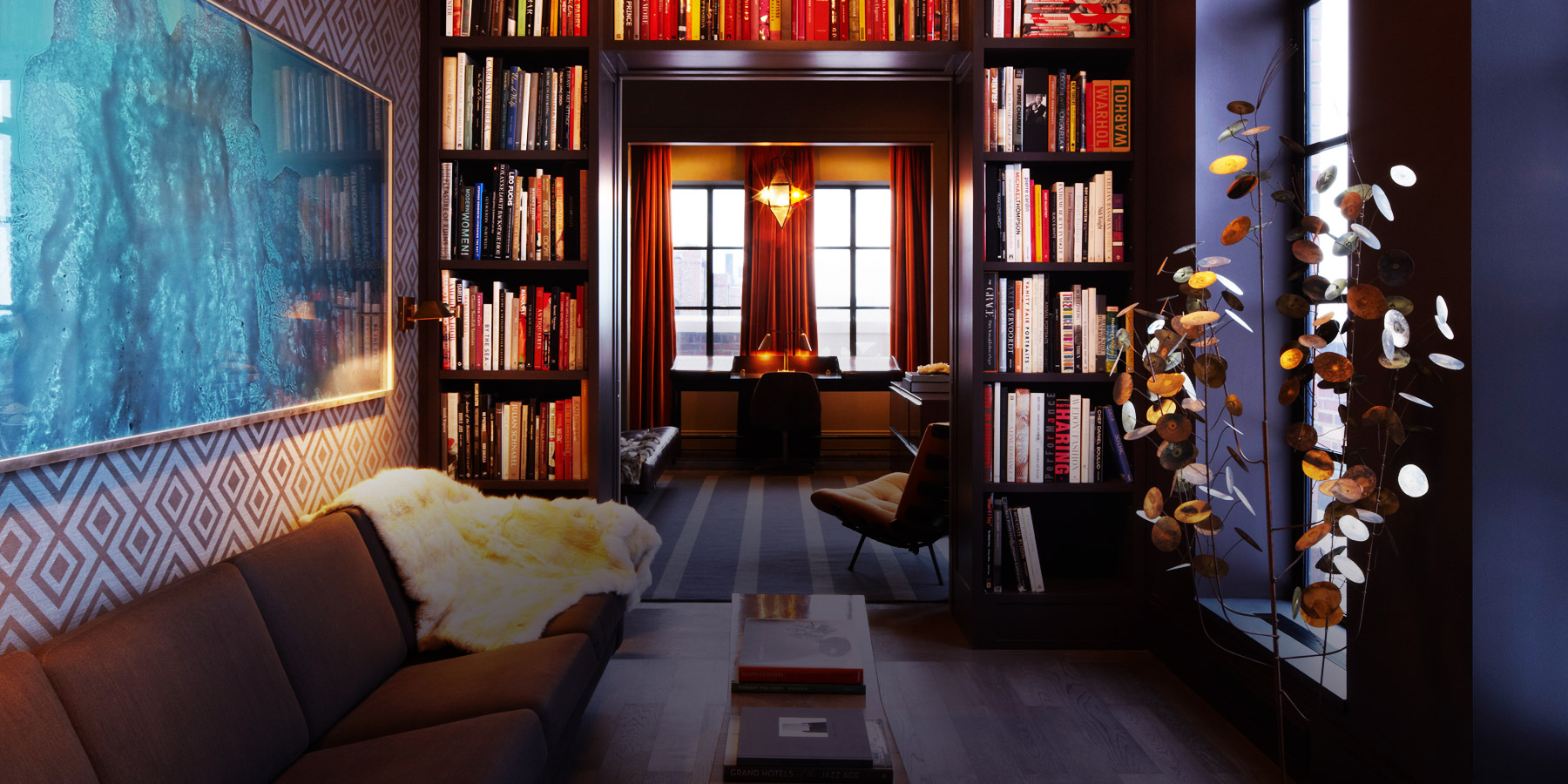 The trio of architects behind the New York firm Janson Goldstein — who met while creating luxe lairs for some of the world's best-known fashion brands — specialize in bringing the same elevated level of finish and finesse to richly decorated private residences as they do to ravishing retail environments. 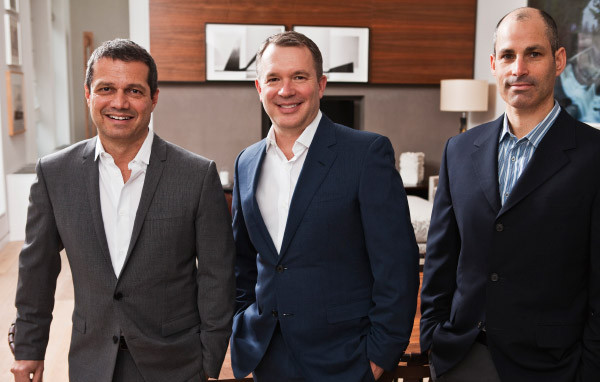 A 150,000-square-foot top-end department store on the outskirts of Toronto. A spacious but understated Shaker-style home in the Long Island hamlet of East Hampton. A bijoux Intermix boutique on Miami Beach’s bustling Lincoln Road. A penthouse pied-à-terre in Manhattan’s iconic London Terrace.

At first, such varied projects don’t seem like they have anything in common, let alone like they’re all the work of the same designers. But the architects behind this impressive array — the three partners of the small New York-based firm Janson Goldstein — see a close connection between their elite retail work and their high-end residential commissions.

“Everyone is their own brand these days,” says founding partner Hal Goldstein, explaining the synergy among the varied projects in the firm’s ample portfolio, adding that his firm’s job is to “identify what people want, what they’re about, what their lifestyle is, and then create something around that.”

From its very start, in 1995, the firm has aimed to foreground modernist principles and aesthetics in its work, while also combining the disciplines of architecture and interior design under one roof. “We really want to give clients the full picture, inside and out,” says Mark Janson, the partner with whom Goldstein founded the firm after the two worked for starchitect Steven Holl and then for retail-design doyenne Naomi Leff. 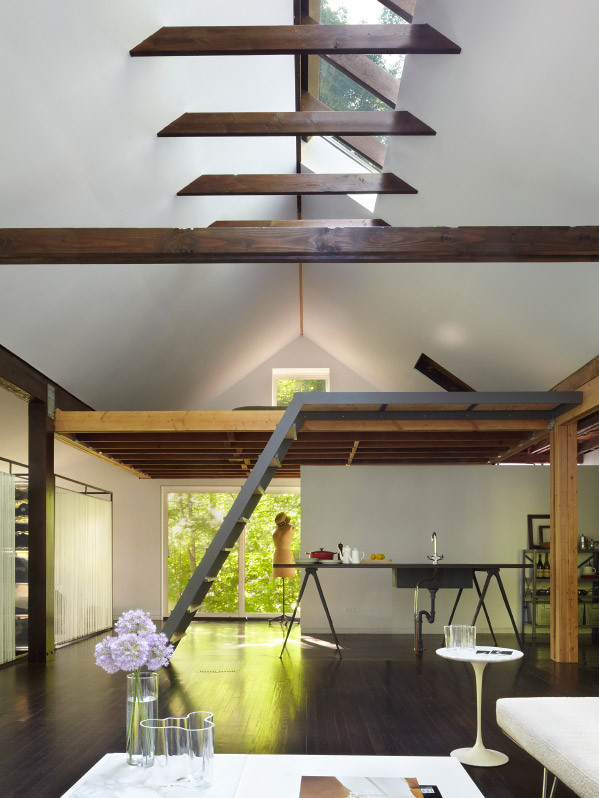 The firm demolished the original interior of a cottage in Garrison, New York, to create a loft-like, open-plan living area. The architects then exposed the existing structure and added a new skylight running the length of the home’s gable roof. Photo by Mikiko Kikuyama

Other firms had done this before, of course, but, continues Janson, “We had a tremendous amount of experience because Naomi and Steven were both at the top of their game.” In creating their own outfit, the partners sought to combine the complex geometries and sophisticated, avant-garde modernism of Holl and the exquisitely finished, luxe interiors of Leff.

When Goldstein and Janson first set off on their own, they did so without any clients immediately in tow. “We rented space, we invested the money, we thought about who we wanted to be, how to practice,” recalls Janson. “We had some time to design the business.” Work — and recognition for it — quickly followed, however, especially in the retail field, with commissions from Calvin Klein, Giorgio Armani and Donna Karan pouring in one after the other. A few year’s after the firm’s founding, a loft they designed in New York’s Flatiron neighborhood was featured in Interior Design. Shot by noted lensman Paul Warchol, it also adorned the cover of the Monacelli Press’s Loft, which Warchol produced with noted design editor Mayer Rus, and, from there, it made its way into magazines around the world. This, followed by attention-grabbing projects for Armani and a redo of Ferragamo’s Fifth Avenue flagship, firmly established Janson Goldstein’s bona fides.

In these early years, Steven Scuro — another colleague from Naomi Leff — joined Janson Goldstein as the firm’s third partner. Since his days with Leff, he’d spent seven years running Donna Karan’s store-design department, during which time he oversaw the creation of hundreds of different outlets for the company. As such, he brought to the firm not only acute aesthetic acumen but also a highly attuned sense of what retail clients need and want from their architects.

“Everyone is their own brand these days. We identify what people want, what they’re about, what their lifestyle is, and then create something around that.” 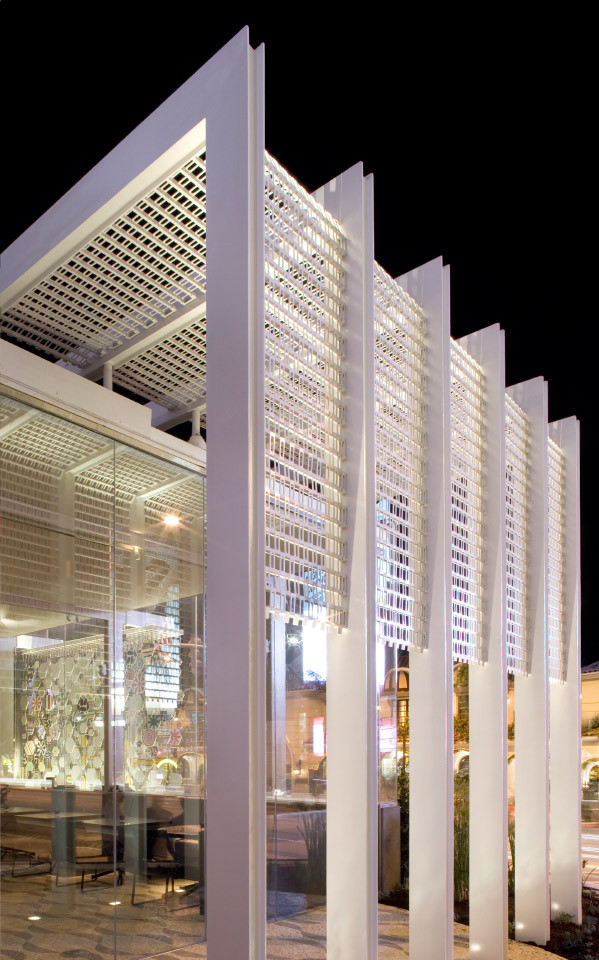 “You understand their pressures and concerns,” says Scuro, speaking with his partners in the firm’s light-filled industrial-feeling Hudson Square studio. “So much of this business is the trust that the client puts in you, and my having been in the position of being the client helps to ease that.”

Earning clients’ trust has served the firm well. Over the last two decades, Interior Design magazine has singled out their spaces as Best of Year some five times, House & Garden named them to its New Tastemakers list in 2007, and, in 2011, one of their residential projects landed the Holy Grail of design-publication placements: the cover of Architectural Digest.

That home — the penthouse in New York’s London Terrace — belongs to Ed Filipowski (president of fashion PR powerhouse KCD) and Mark Lee (CEO of Barneys New York), whom the partners have known for decades and who here asked the firm to turn a rabbit’s warren of a four-bedroom apartment into a more graciously flowing, light-filled one-bedroom.

The redone penthouse’s aesthetic blends influences both old and new, since Filipowski and Lee wanted references back to the building’s prewar origins — crown moldings, say, and other custom millwork — while also playing to Janson Goldstein’s modernist point of view, which comes across in the sophisticated, interlocking spaces of the smartly ordered new plan. Perhaps most significantly, the architects replaced the original small windows with a series of 27 French doors that open onto a wraparound terrace. Now, notes Janson, who led the project, “You can walk outside from anywhere, even the shower.”

In East Hampton, meanwhile, the firm recently completed a Shaker-style pile, a 9,000-square-foot family weekend home that disguises its size — as well as its rather contemporary interiors — under a low gabled roof and behind a traditional shingled façade. The rigorous, grid-like placement of it six-over-six windows, meanwhile, clearly relates to the organization of the spaces inside. For Goldstein, who helmed this home, the Shaker aesthetic provided a spot-on solution to the challenges of combining the traditional with the contemporary. “We were constantly looking at the details and the language of Shaker architecture, and how it all relates to modern and open space,” he says.

Goldstein designed the house to be only one room in depth on the ground floor, while upstairs a spine-like hallway on one long side connects the bedrooms on the other. “All the windows open up, and you get air and light all the way through, all day long,” says Goldstein, who notes the home barely ever requires air-conditioning. “It’s a modern country home,” he says by way of conclusion. “From the outside, it looks like our clients found a historical property and then renovated it to create these big open-air spaces.” 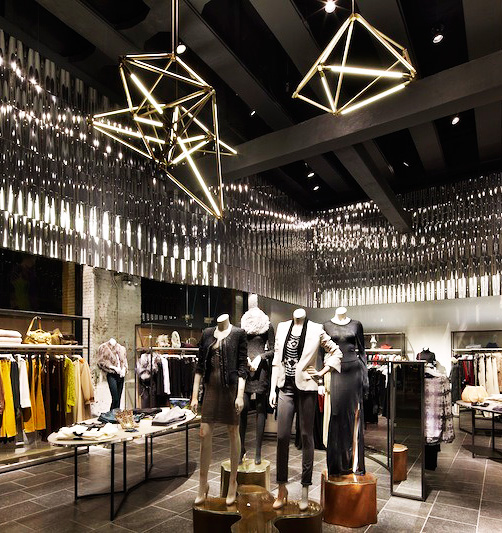 As part of its ongoing redesign of all the boutiques belonging to multibrand fashion emporium Intermix, the firm gave the shop in New York City’s Meatpacking District a decidedly downtown feel. The ceiling references the structure of the nearby High Line, while the floor nods to the neighborhood’s cobbled streets. Photo by Mikiko Kikuyama

Such careful attention to detail and process, form and function, as well as an easy, understated way with luxe finishes, fixtures and fittings, are what keep clients coming back to Janson Goldstein — none more so than their longtime retail clients, some of whom have been working with the firm for decades. Take, for example, the high-end department store Holt Renfrew, which is Canada’s answer to Barneys or Saks. A client since the firm’s earliest days, Holt now has several projects under development with Janson Goldstein, including a stand-alone men’s shop and that 150,000-square-foot project, a ground-up development in Mississauga, near Toronto, whose 35-foot-high glass walls have been conceived to help turn the building into an architectural icon in a downtown area that already includes the city’s performing arts center, town hall and a park.

For the last several years, the firm has also been working with the high-end, multibrand fashion chain Intermix. Rolling out new retail concepts in 40 of its locations so far, Janson Goldstein has sought to create spaces that respond to the character of each boutique’s neighborhood and clientele, often commissioning local artists to make site-specific works and always creating their own custom furnishings.

Homeowners have long come to the firm looking for the same sort of high-gloss polish, sophistication and materials they’ve seen in its boutiques, but it seems that now retailers also want the more personal touches found in the residences Janson Goldstein creates. “Increasingly, retail clients are asking us for designs that are unique to their neighborhoods, to their cities,” Janson explains.

And that makes sense. After all, who wouldn’t want to feel as comfortable shopping as when cozily holed up at home — in East Hampton, say, with the windows thrown open to let in the cool evening air?