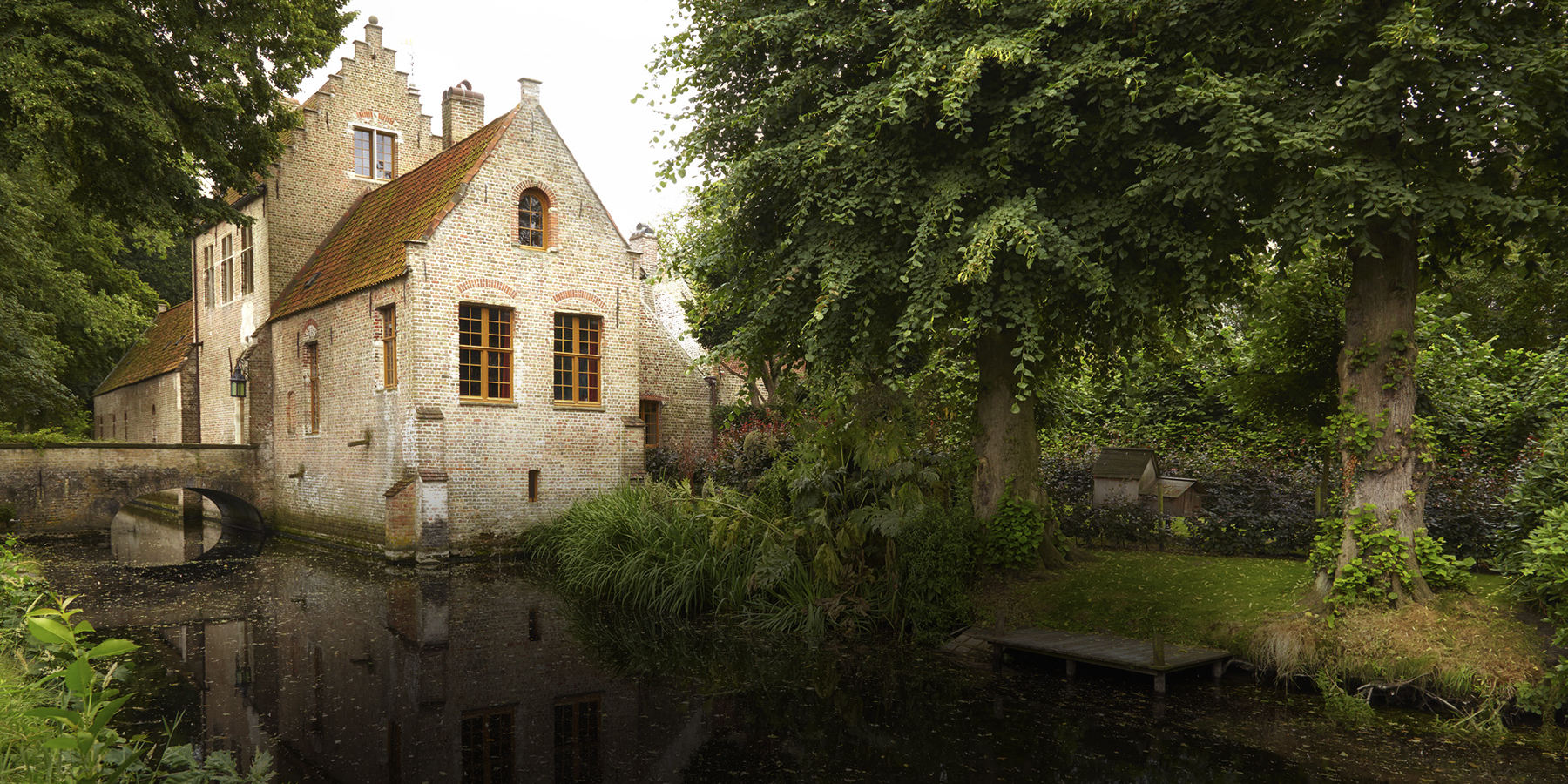 The Belgian antiques dealer and interior designer holds court in a 13th-century country manor where he lives and works, constantly refining his utterly unique aesthetic. 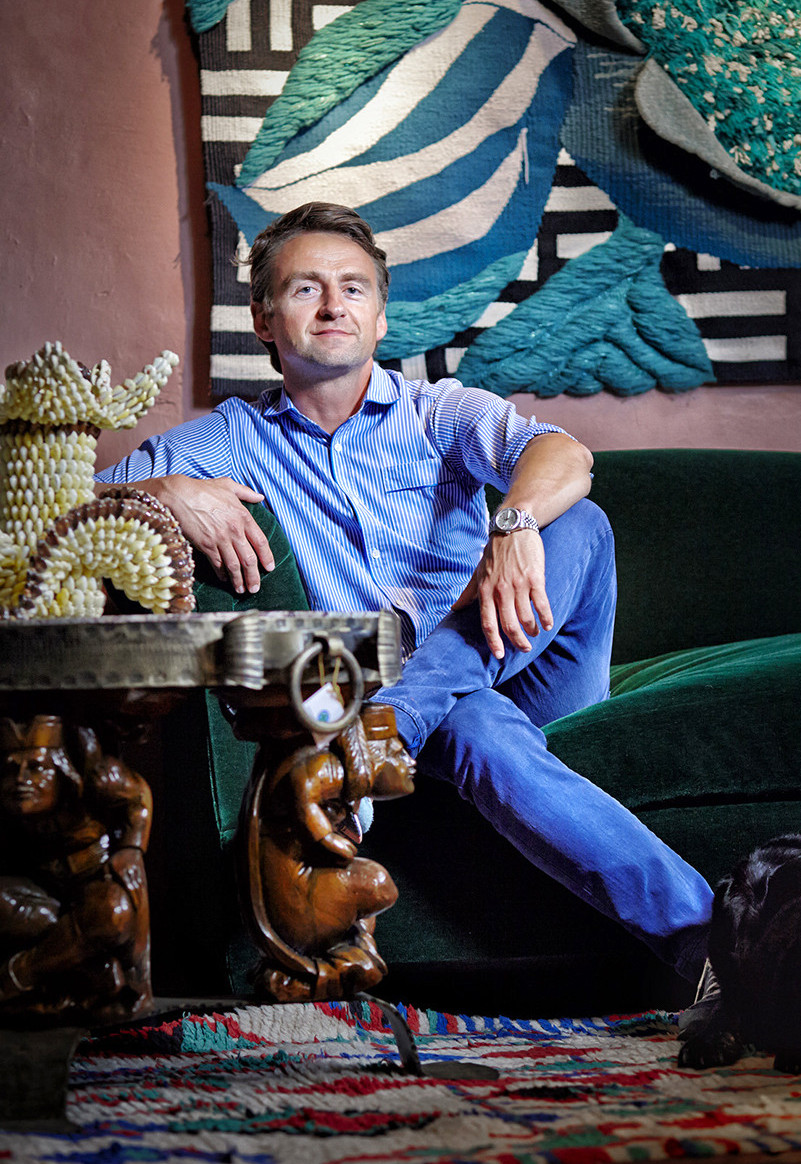 Demeyer sits on a 1970s green mohair velvet sofa beneath a 1960s Flemish wool tapestry; in front of him, a shell-covered souvenir from the French Riviera tops a Gothic Revival–style coffee table, one of a pair from the 1960s.

Belgian antiquarian and interior designer Jean-Philippe Demeyer likes to describe his taste as “anti-serious.” That is, humorous, but not in a way that makes anyone laugh. He seeks surprising juxtapositions of pieces from different eras, origins, colors and moods, happily juxtaposing objects with high patina and funky style, against expensive objets and items of found-art kitsch. An example of an anti-serious interior, he says, might be a small English country cottage with a long antique walnut table that’s “much too big for the room” topped with a red-glass vase bought for five dollars on eBay.

Demeyer and his two business partners, Frank ver Elst and Jean-Paul Dewever, began their company with a small antiques shop in the Belgian seaside resort of Knokke. Here, they quickly developed a roster of well-heeled clients who wanted more than just an item or two, which led to a decision to expand. Now,  working from a moated 13th-century country estate about a ten-minute drive outside Bruges, in Belgium’s West Flanders, the three partners operate a much more far-reaching business under the name Rooigem, which includes interior decorating, antiques dealing, restoration and the design of bespoke sofas and chairs.

“People don’t buy one item anymore; they want the whole ensemble – the sofa and the table and the nice object and the coffee table, too,” says Demeyer of the international clients who come to him both for antiques and interior-design services. “The world completely changed about five years ago.” Demeyer attributes this change to new design concepts pioneered by people like fellow Belgian Axel Vervoordt, a trailblazer when it comes to mixing and matching design elements from all eras, rather than creating a whole “period” look. These days, Demeyer says, clients want their homes to evince a collector’s eye for detail. 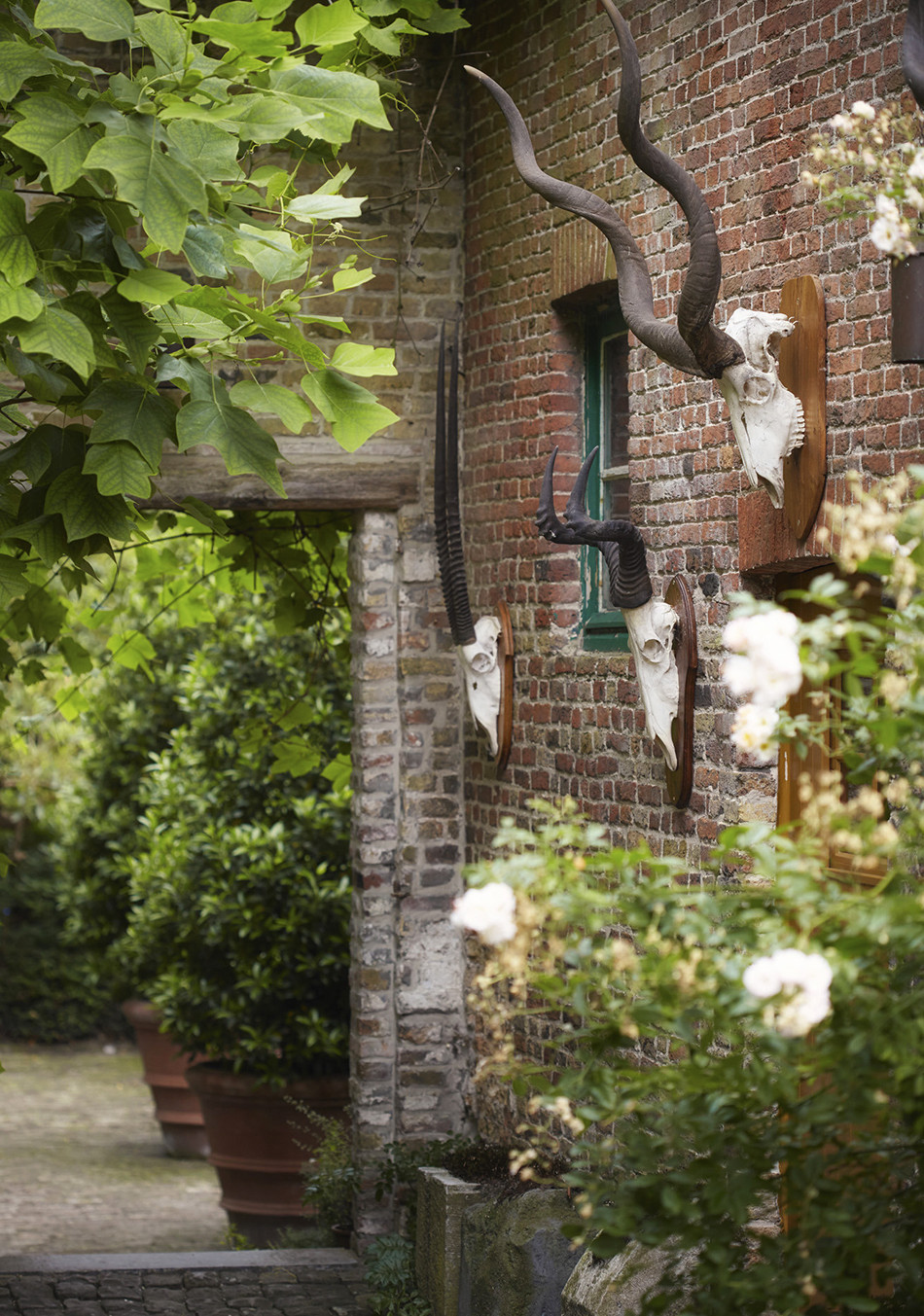 A view toward the orangery reveals laurels planted in huge pots and horned animal skulls mounted as hunting trophies.

The 20,000-square-foot showroom also serves as home to Demeyer and his partners, all of whom quite literally make their work their lives, eating and sleeping in their workspace, which they are always redesigning to better show off their wares. Every room is a gallery, to a greater or lesser extent – including the bedrooms. All the furnishings in the house are for sale except those in the kitchen, which features an original black-stone sink and a massive modern range positioned in the inglenook fireplace. When they have clients visit, Demeyer says, they just tidy up a bit.

The stunning home, on a quiet byway in the countryside, across from an orchard studded with cows, is actually a series of buildings constructed over many centuries. The oldest section, where the partners eat and sleep, is an early medieval hunting lodge from about 1200, built along a pre-medieval road between Roman camps.

In the winter dining room, also in the oldest part of the house, the walls are painted in a bold grisaille graphic design called diamond point. Upstairs, in the library with original exposed-wood beams and a lime-green fireplace, a massive emerald-green shag carpet fills the ample floor space, topped with a mushroom-colored suede couch that’s as wide as a queen-size bed. In the windowsills, Demeyer has turned hand-blown glass platters from Parma, Italy, into sculptures, positioning them upright in steel frames so they catch the light. 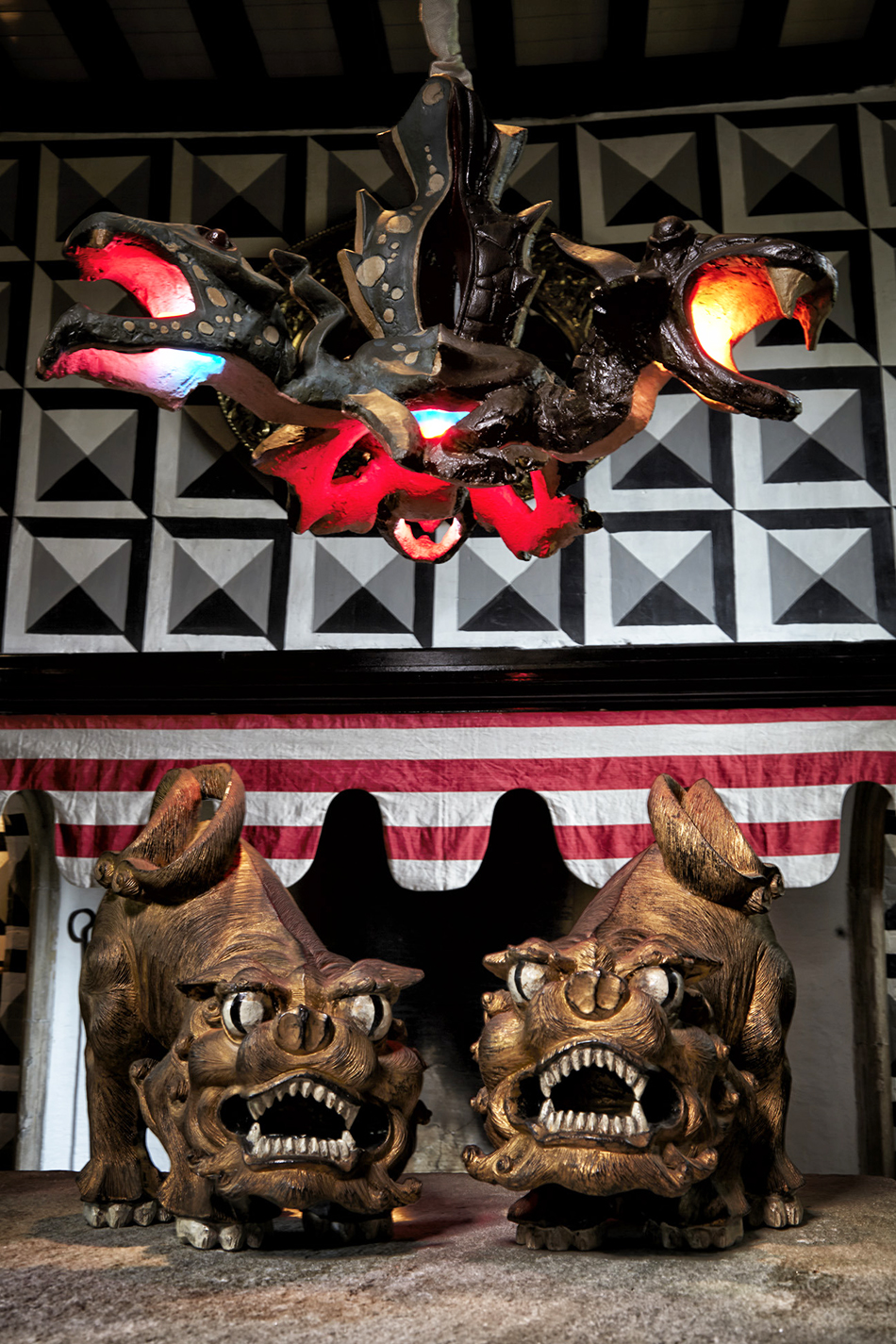 In the entrance hall, a pair of Chinese carved-wood dogs from the 1960s stand guard under a terra-cotta folk-art dragon chandelier from around 1950.

“I have no rules,” Demeyer says. “I just buy on my own feeling. I don’t care about names and time periods. Names are for people who are insecure. It’s not for me. I feel very secure about my tastes because I only do it for me and for the people who like what I do. It’s a feeling, not math.”

In the office, built later with a Victorian-era brick facade, a Gothic Revival cabinet that has been painted white and finished with mismatched colored panes of glass in the doors, sits next to a 1960s psychedelic painting by an anonymous artist. The former horse stables, meanwhile, are used as a textile showroom, where customers can choose to cover their bespoke furniture with a variety of Demeyer-selected fabrics. (Most of his pieces are strikingly deep or remarkably wide, as Demeyer believes a couch should be a place for lounging.) There is also an orangery and an outbuilding given over to antiques restoration. 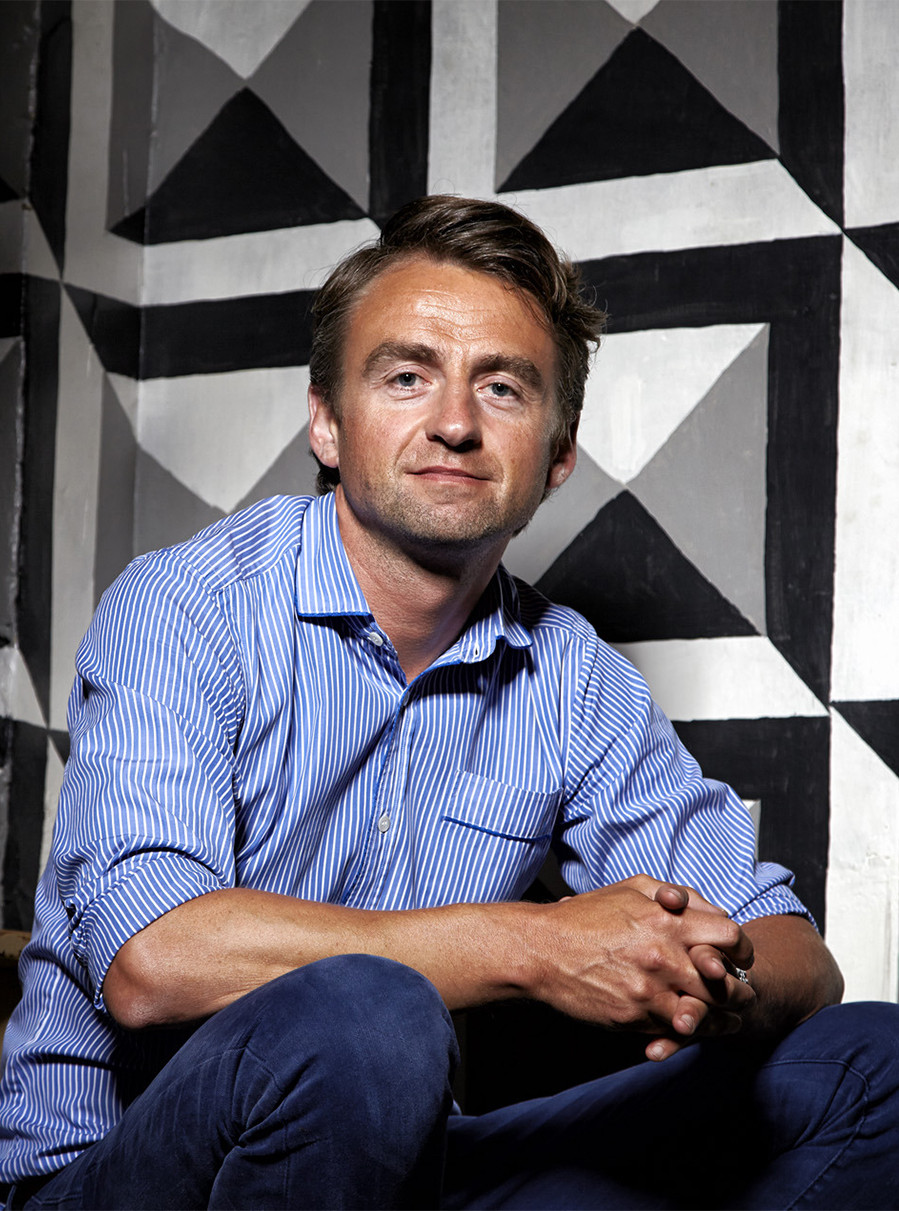 “I have no rules,” Demeyer says. “I just buy on my own feeling. I don’t care about names and time periods.”

“It’s typically Belgian that someone who does interiors also has a house where they have an open house or open days to show their interiors,” he explains. “In every village you almost always have a dealer who has a barn or a small manor they use for antiques. Belgians love to visit all these places. We like to see how people live.”

As items are sold, Demeyer constantly changes the furnishings in the house; recently, the orangery contained a large baby-blue sofa, a coffee table made from a large slab of stone that Demeyer found in a marble atelier and a ceramic French lamp adorned with oversize hand-painted flowers.

There’s nothing Demeyer dislikes more than strictly period interiors. “The anti-humorous interior is the French Louis XV interior with gray painted ugly chairs – horrible! – with stupid fabric with small flowers and a small vase on the table with small flowers in it.”

Trained as a lawyer, Demeyer never formally studied design, but he said he has been attuned to interiors since he was a child. “Since I was young I looked at houses and gardens and interiors like some people like to look at how people are dressed,” he said.

After completing six years of law school, he spent a year working for the Belgian design dealer Paul de Grande, based in Bruges, who deals antiques wholesale to other dealers and decorators. Then he opened the shop in Knokke, a town he describes as akin to the Hamptons but “not so sober.” Clients who frequented the shop started seeking his advice – “to come choose a color on the wall or a lamp to go with the sofa” – and little by little he became more of an interior-design consultant than an antiques salesman.

And that suits Demeyer just fine. “I’m not a `piece person,’ ” he says. “I never enjoy an acquisition. An acquisition only makes sense when it’s in the right spot. When I get something, I like to think: What can I do with it?”

Jean-Philippe Demeyer shares his thoughts on a few choice pieces.