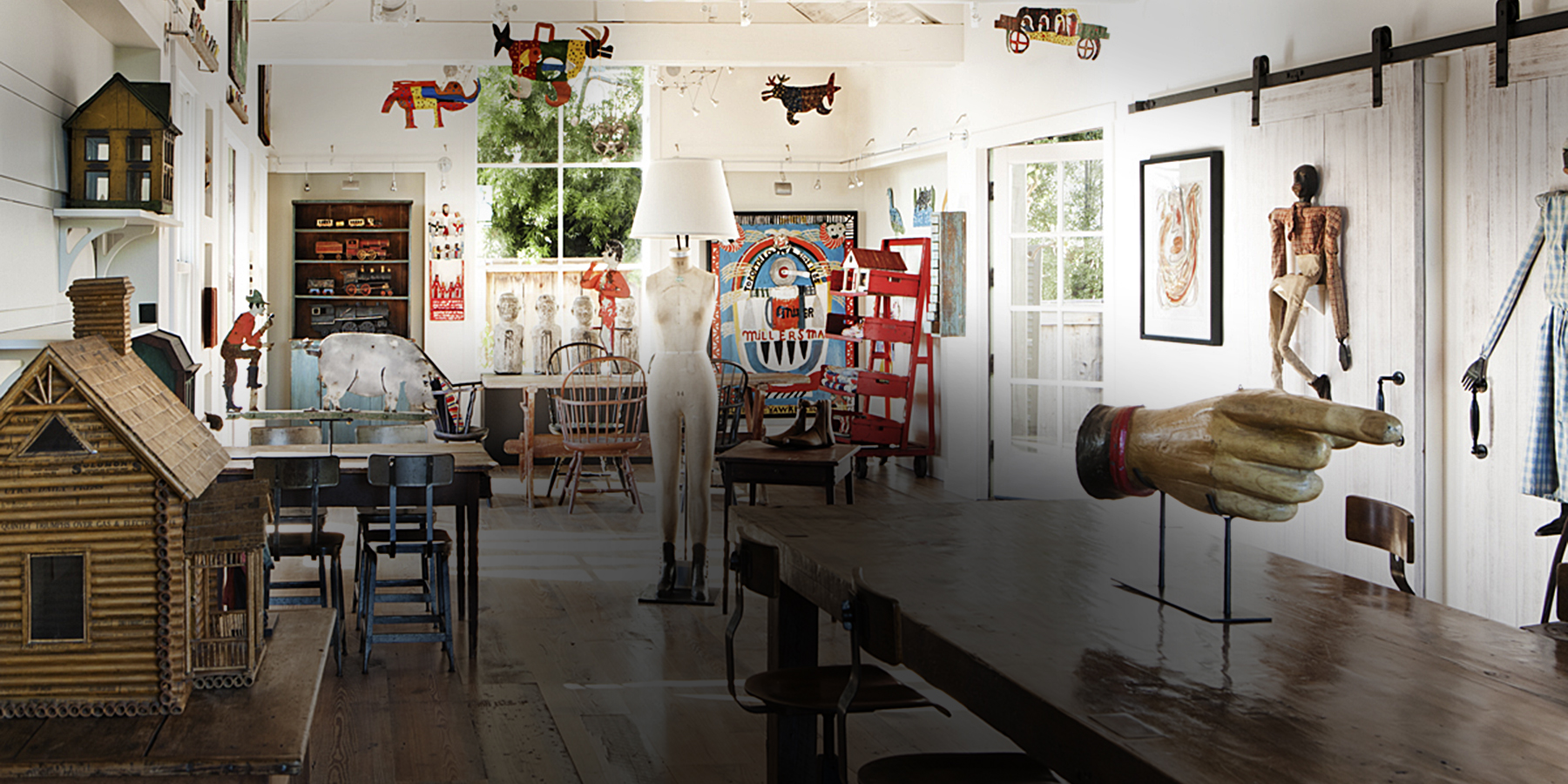 In the quaint California village of Summerland, just south of Santa Barbara, two former TV producers and Americana fanatics, Susan Baerwald and Marcy Carsey, have opened Just Folk, a gallery of country antiques, tramp and outsider art that has become the go-to shopping spot of such high-end interior designers as Ellie Cullman and Rose Tarlow. 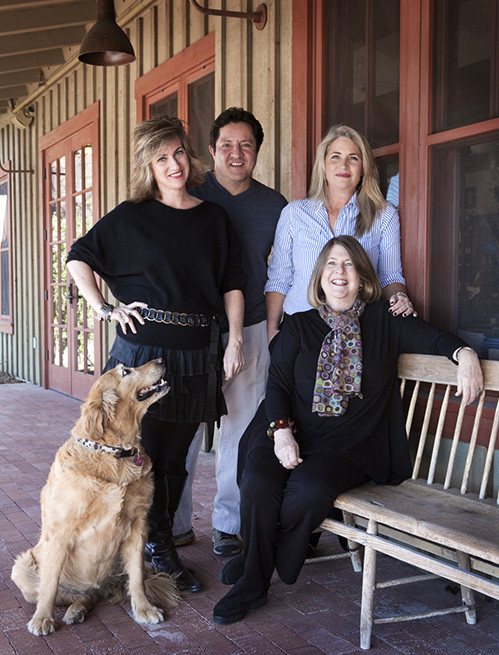 Summerland, a quaint stop along the freeway just south of Santa Barbara, is a place that appears frozen in time. People wave hello, yield to pedestrians and are lulled into serenity by the gentle breeze from the nearby ocean. With a main street lined with antiques shops, the town has also long been a haven for collectors. And so it proved an apt spot for Marcy Carsey and Susan Baerwald — both East Coast natives, Americana collectors and former LA television executives — to open their shop, Just Folk, its name reflecting both their goods and the local townspeople. “Summerland started as a religious community, with people living in tents,” says Baerwald. “Then it became a biker town; then it slowly gentrified, but it’s always been a funky little place.”

Baerwald — who produced a number of popular television movies in the early 1990s — and her husband, Paul, had been weekending in this funky little place for years before stumbling upon an equally funky structure in a prime spot on the main drag. “It looked like a Motel 6,” recalls Baerwald, who went on to buy the property in 2001, partnering with Carsey, best known for creating The Cosby Show and Roseanne, among other shows, as one half of Carsey-Werner Productions. The building, unfortunately, proved impossible to salvage, so the partners enlisted local architect Brian Cearnal to build a new structure that would suit the cache of folk art they planned to fill it with. “We gave Brian a book of old barns, and he went to work,” says Baerwald. In 2007, Just Folk opened in an appropriately countrified new building with a deep porch, double-hung windows and a pitched roof covered in corrugated metal. (The Baerwalds’ cottage, finished around the same time, sits just behind the shop; Susan’s daily commute consists of crossing a footbridge while enjoying the ocean views.) 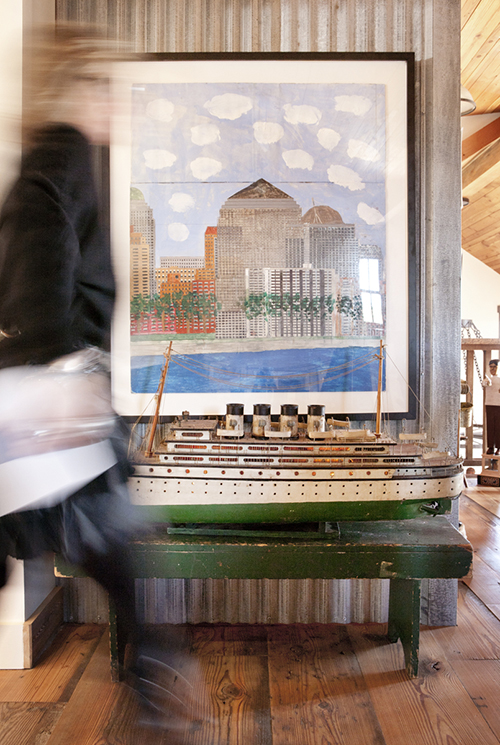 A vintage ship model, made by a Baltimore prisoner, sits in front of a New York scene painted by Chris Murray, a self-taught autistic artist who uses a ruler and pencil to create precise perspective.

Central to Just Folk’s vast inventory is work from so-called outsider artists: those whom the art world, and very often the world in general, have ignored or cast aside. The best known of those offered at the shop is Bill Traylor, who was born into slavery, began painting in his 80s at his favorite spot on a sidewalk in Montgomery, Alabama, and worked prolifically during the few years that remained before his death in 1949. His figural pieces, in primary hues and black, done on cardboard inserts and shirt forms — the materials then available to him — are now highly celebrated and are included in the permanent collections of the Museum of Modern Art and the Metropolitan Museum. Thanks to a pivotal acquisition in 2009, Just Folk now possesses among the largest groups of the artist’s works available.

The work of lesser-known outsider artists, passionately represented by Baerwald and Carsey, also fills the shop, which expands from the ground level into a gallery-like second-story space. Here, one finds works from outsider artists both contemporary and generations old. James Harold Jennings, who lived in a school bus on his mother’s property until his suicide in 1999, for example, painted images of scantily clad yet highly empowered women beating up men, including a whole gang of gals in miniskirts wreaking havoc on men in shirts and trousers. Eddie Arning began working in crayon while institutionalized after an attack on his mother. (“He has perfect precision,” notes Baerwald.) Especially fascinating is the work of George Widener, who has a form of Asperger’s and is obsessed with the Titanic. One of his works depicts tiny tissue paper ghosts floating among the ship’s wreckage, with the dates of its sinking, along with equivalent dates far in the future, and the words “forever…no end in sight.” 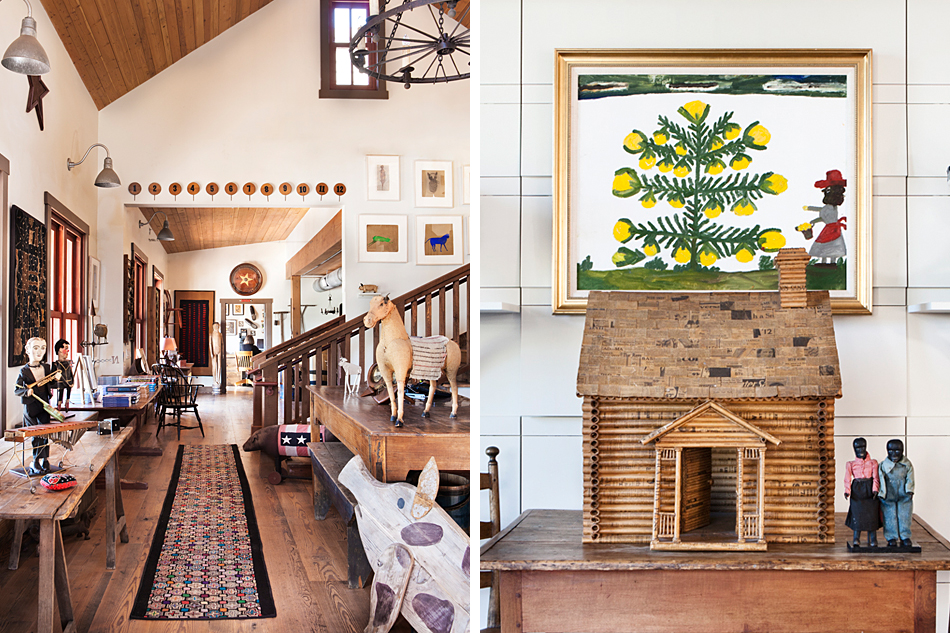 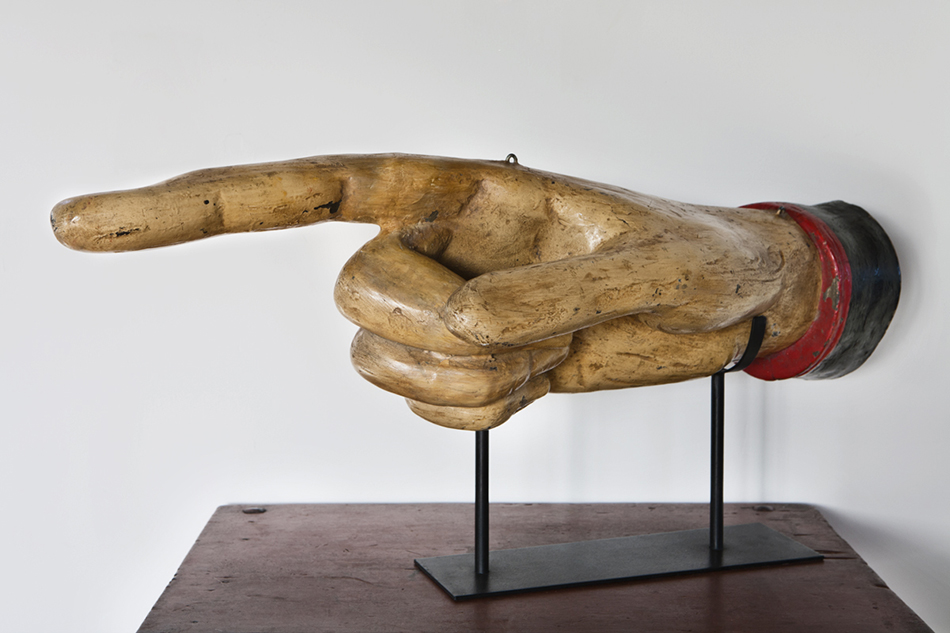 A hand-made tin figure possibly used as a weathervane. 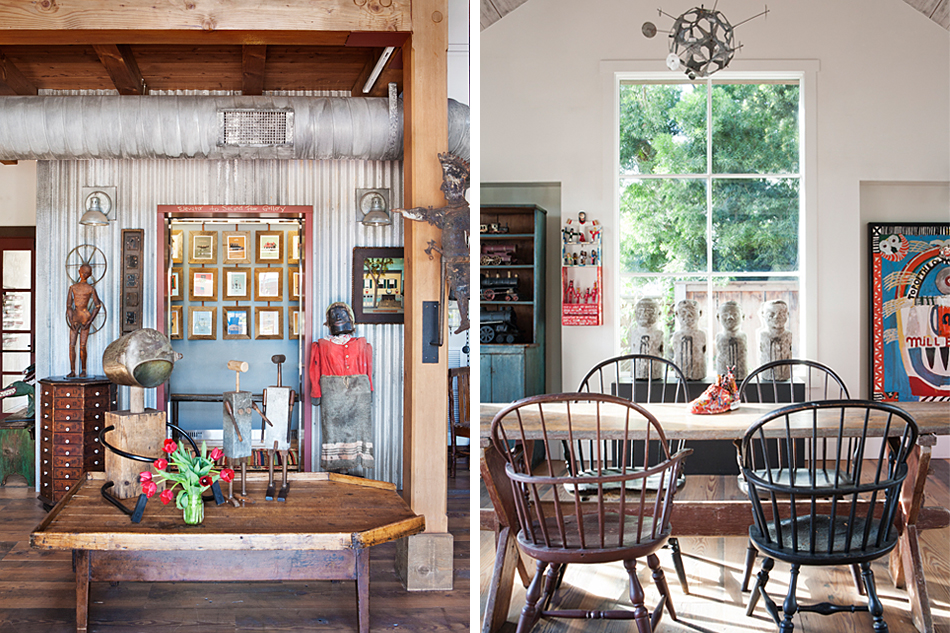 Left: Set against corrugated tin siding are, among other objects, a 19th-century artist’s mannequin atop a hardware store bolt cabinet, a black mammy doll used as a scarecrow in the 1920s and a coffee table made from a grain sorter. Right: Behind a 19th-century table and chairs sit sculptures that were
possibly used to indicate a safehouse for runaway slaves during the Civil War. 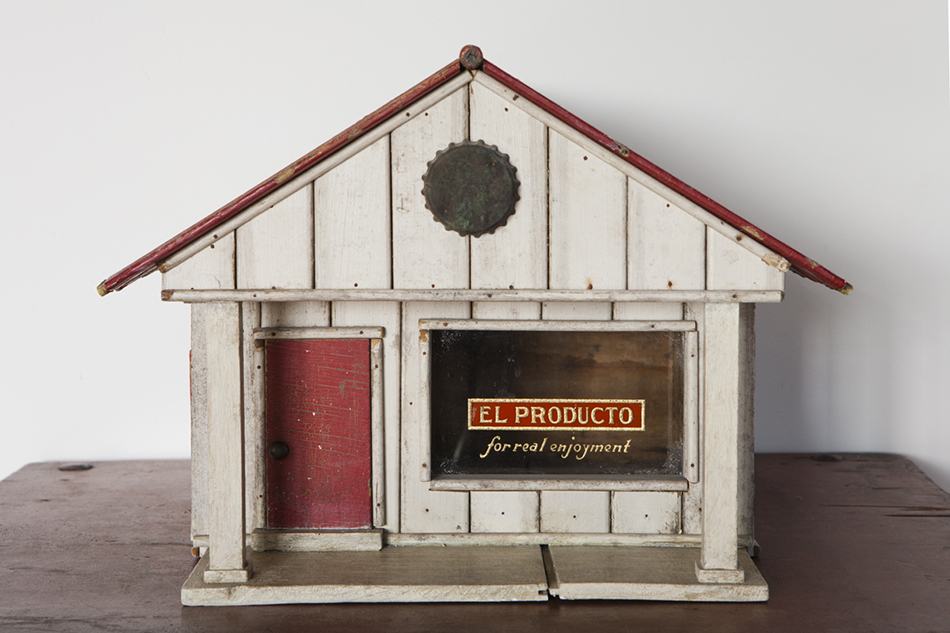 Americana’s equivalent of outsider art is tramp art, the term grounded more in an old German translation of trampen, or apprenticeship, than the embodiment of an aimless, Charlie Chaplin–style wanderer. In these mostly early-20th-century artisans’ hands, found objects, bottle caps, scrap wood and newspaper became intricately crafted houses, boxes and animals, extraordinary examples of which can be found throughout the shop. Joining these are exceptional specimens of folk art, such as a circa 1910–15 baby doll mannequin in red high heels; a double-sided topsy-turvy doll with one end black and one white; whimsical Victorian-era 10th-anniversary tin gag-gifts that are now worth more than many contemporary anniversary gifts; and handmade vintage quilts, including colorful, blocky, African American–made designs from Gee’s Bend, Alabama. “They just take my breath away,” says Baerwald of the quilts. “They’re so architectural.”

In one cozy corner of the shop, a display of tools, handmade kitchen utensils and trade signs accompanies a carved wooden rooster by Felipe Archuleta and a leather dachshund from the 1940s.

Our range covers the whimsical to the significant,” says Baerwald, while showing off a set of four mortar-and-stone fence posts topped with carved heads and marked with a distinctive gesture resembling an elongated letter “M.” Excavated in Roxbury, Connecticut, and dating to the 1870s, the heads are thought to have marked a safe house where escaped slaves could find shelter. “These pieces belong in the Smithsonian,” she says.

Thanks to the shop’s extensive library, located near a cozy fireplace on the first floor, shoppers can learn more about the particular folk-art genres sold here, and even discover the provenance of some of the more notable pieces from the major collections Carsey and Baerwald have acquired for the store. (Many of its offerings have been featured in folk art–focused books and magazines.) “We’re very careful to keep our library up. We have everything that’s been published on outsider art for sure, and a lot on folk art, too” says Baerwald. “We’re very big on informing people about our artists. We want you to know about them.”

With diehard collectors buying from all over the world, and designer clients such as Rose Tarlow, Ellie Cullman, Joe Nye and Sasha Emerson, Just Folk has established a loyal and enthusiastic following. “Our clients treat our shop like a museum because it’s wonderful to look at,” says Baerwald from a checked sofa near the library, with Etta James’s “Sunday Kind of Love” piped in from somewhere beyond. “There aren’t a lot of dealers who have the combination of old and contemporary in American folk art. And some buyers can’t possibly understand why they should pay $2,000 for an old painted piece of furniture. But those who get it, get it.” 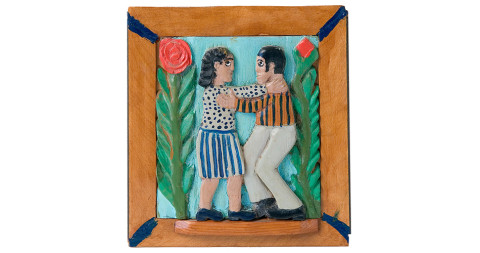 Elijah Pierce was a preacher, a barber and a woodcarver in Columbus, Ohio. His works have been recognized as some of the finest examples of African-American self-taught art of the 20th century. He carved and painted secular subjects, biblical parables and freestanding animals. His works are hanging in many museums around the country, including the American Folk Art Museum in New York. This dancing couple is one of my favorites. 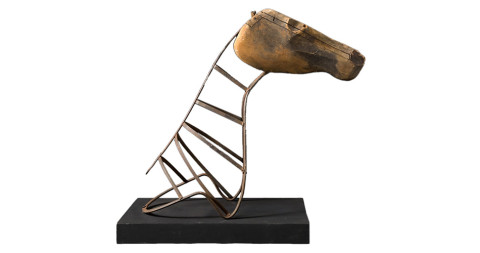 We don’t know what function this beautiful horse head served, but it is incredibly architectural and spare, mounted on a black slab that accents the metal frame and wooden carved head. Traces of metal and leather indicate eyes and ears. Dating to the 1880s, this piece has only minimal features, but it is raw and powerful and could be featured in a very modern or traditional environment. 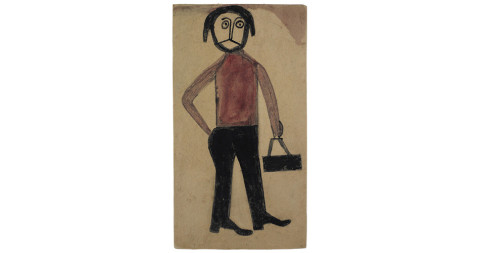 Bill Traylor was born a slave on a plantation in Alabama and didn’t start painting until the age of 83. His incredibly simple and graphic images are rendered in an expressive style, painted on old shirt cardboard with poster paints. This one might reflect a personality he saw emerging from the railroad station across from his sidewalk perch outside a funeral home. Traylor is highly regarded as a major Outsider Artist. 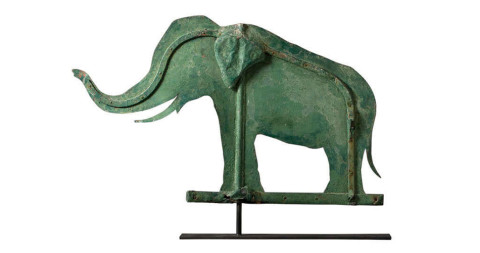 This marvelous green elephant weathervane is clearly one-of-a-kind, made by hand in the late 19th century. It has great provenance and a wonderfully worn patina indicating it was certainly used to measure the wind on a beloved home or barn. It’s amazing how many utilitarian things had great design that transcended their practical use. 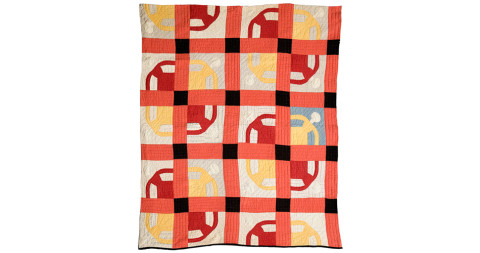 I love the unusual colors and graphic blocks of this southern Georgia quilt created by an African-American woman in the early 1930s. The silhouetted girls seem to twirl around in groups of four, giving the feeling of movement and joy. This is certainly a unique quilt with a very feminist theme. 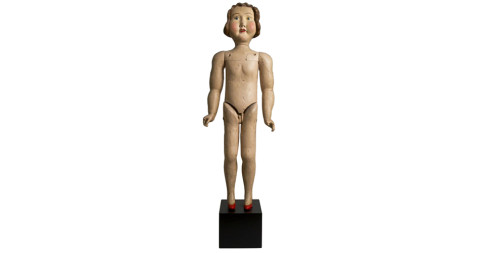 The very large size of this carved and articulated baby doll indicates that it may have been used as a mannequin to model clothes. As sculpture, it is iconic, featured in the book American Vernacular. The polychrome red high heels contrast with the innocence of the face and body. It came from the home of Gael and Michael Mendelsohn, famous folk-art collectors.