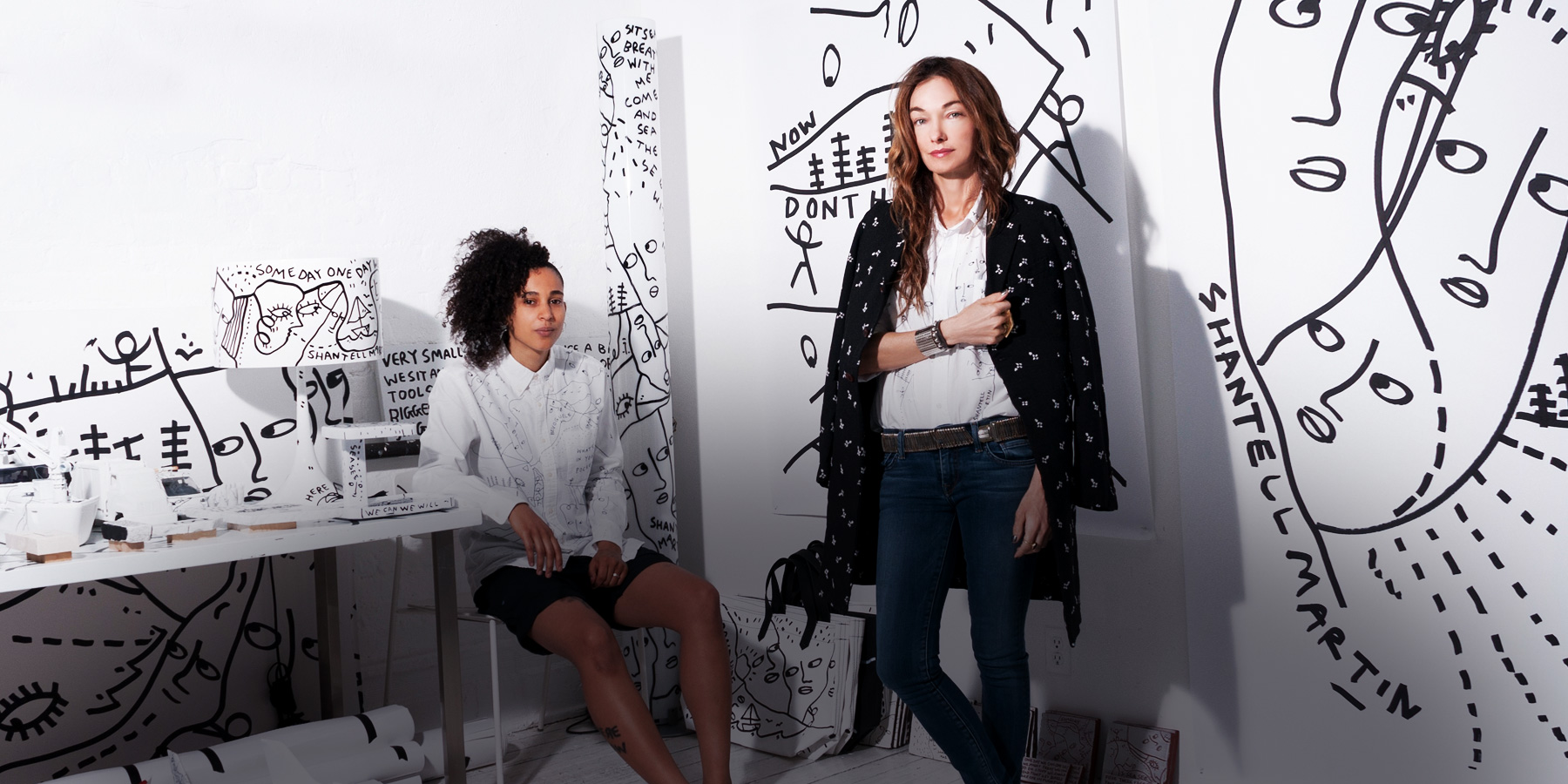 The glam Hollywood interior designer Kelly Wearstler has teamed up with Shantell Martin, an artist known for her graffiti-like ink drawings to create a limited-edition line of furniture and fashion items, now available on 1stdibs — while they last.

October 2014To create their new line of home decor and fashion pieces, Kelly Wearstler and Shantell Martin became pen pals of sorts. The famed South Carolina–raised, Los Angeles–based designer teamed up with the London-to-New York transplant artist, who has earned acclaim for exuberant black-ink marker drawings, and the duo began a cross-country correspondence. “Kelly sends me totes, T-shirts, jackets, silk scarves, marble sculptures and pieces of upholstery leather in the post,” explains Martin, “and I draw on them and send them back.”

While many designers illustrate their work, and a growing number of fine artists design home furnishings, this collaboration presents a twist on the typical design-and-art mash-up. Wearstler, whose interiors frequently feature black-and-white patterns from the Art Deco and Memphis eras, as well as abstract and geometric designs, created functional three-dimensional canvasses, ranging from leather jackets to marble sculptures. Then Martin, who has unassailable British street-cool cred, tagged Wearstler’s designs with graphomania-meets-graffiti embellishments that evoke the work of Jean Cocteau as well as Klaus Voormann, (whose drawings grace the cover of the Beatles’s 1966 Revolver LP).

On October 14, the results of their collaboration were unveiled at Wearstler’s Melrose Avenue retail flagship and on her 1stdibs storefront. “Seeing an artist put her stamp on such a variety of pieces is incredible,” Wearstler says. “I feel like my work is transformed.”

Recently the two women spoke by phone (Wearstler was in L.A.; Martin in New York) with 1stdibs’ David Keeps about their exciting creative partnership. 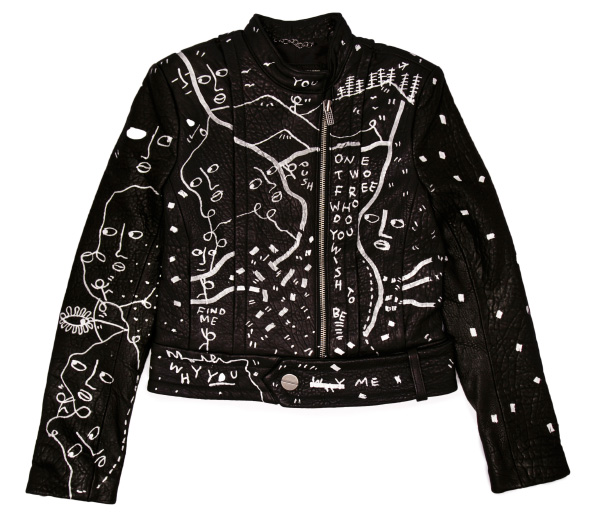 The supersoft lambskin Leather Jacket comes in just one size — a size 4 — and features drawings on the inside and out.

1. How did you two come to work together?

Kelly Wearstler: I first read about Shantell in the New York Times and they had a photograph of her room, in which she had drawn all over the walls. There’s a free spirit and haphazardness in her work; it’s beauty that comes from the heart and happens right there in the moment. She turned out to be a friend of the general manager of my boutique in Los Angeles, so we were introduced.

Shantell Martin: I’ve been in New York for about six years and lived in Tokyo for five before that so I didn’t know that much about Kelly, but I saw a lot of her interiors online. She is very good at mixing different languages — where things sometimes clash, but it always works — and her sense of scale is amazing. We have only physically met once, but I was super impressed with Kelly’s personal style.

Wearstler: [Laughing] Shantell has a uniform.

Wearstler: I had to wear black and white or I’d look like an oddball. 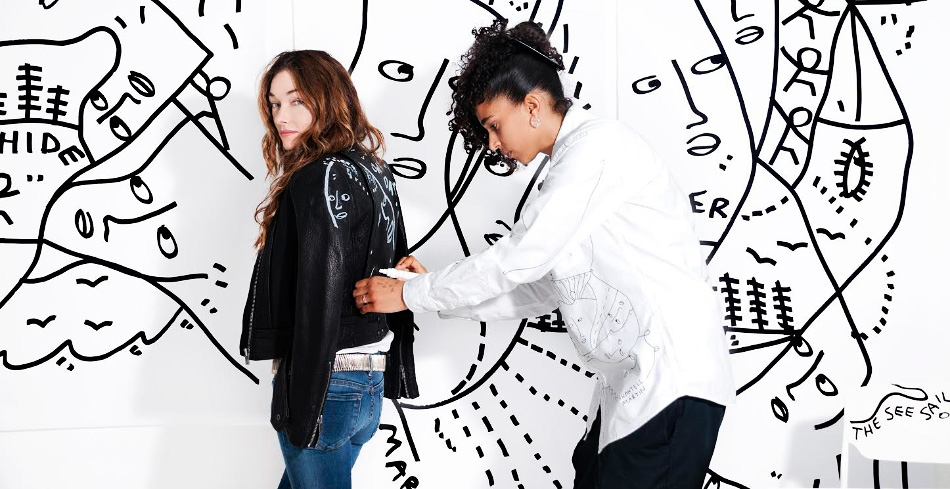 Because Martin drew by hand on each leather jacket in the collection, every one is unique. Photo by Therese + Joel

2. Did you discover other commonalities?

Wearstler: I’ve always loved to draw. When I was growing up, I drew all the time but never on the walls. I would’ve gotten into a lot of trouble.

Martin: I did, and I got in trouble, so I started to draw on the lining of the curtains instead. I’ve always had a really strong interest in interior design. Right now, I have a very small apartment in New York that is very minimal — a mixture of artwork and simple furniture. I had these two massive benches made that say HERE and NOW for my kitchen, a light piece that says WHO ARE YOU on a brick wall and a few custom lamps I did with Flos. I said to myself that I wouldn’t draw on the wall, but, of course, I have. 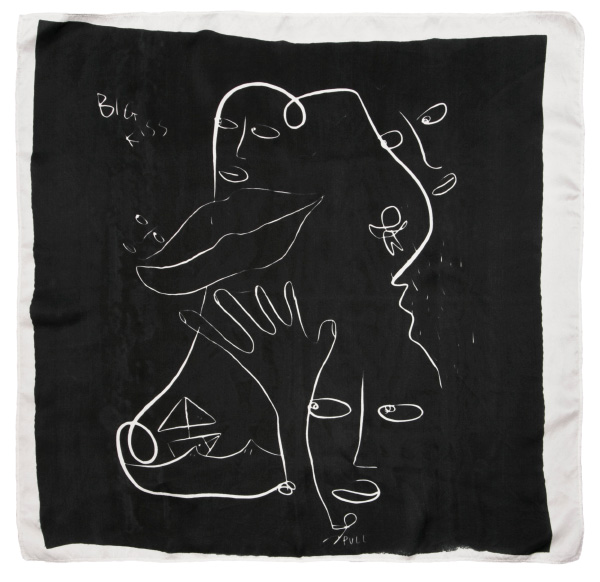 Martin played off a favorite motif of Wearstler’s — the kiss — when drawing on the hand-dyed silk Sailboat Scarf.

3. What kind of challenges did this collaboration present?

Martin: First of all, I tried to lift those sculptures of marble lips, and they are extremely heavy. But as soon as I put that pen to the smooth, curved surface of the marble, it goes where it wants to and starts telling a story. You can’t let the materials intimidate you.

Wearstler: You cannot be scared. As an artist or a designer, if you stay in your comfort zone, you can’t grow.

Martin: But I definitely had to do my homework and find the right pens that would not bleed on marble and that would stay on leather. The work is done by hand, so there is a bit more wear and tear. There’s a fine line between creating a precious object and something you want to use.

Wearstler: Everything has Shantell’s hand on it. What she does can’t be repeated — especially when it’s done so spontaneously. I love Picasso and Keith Haring, and Shantell’s work has that kind of sensibility and familiarity.

Martin: I’m a big fan of Picasso; he was way ahead of his time, and I love that Keith Haring drew on objects. He even did paintings on people. I respect artists who are not afraid of letting their work go out into the world. 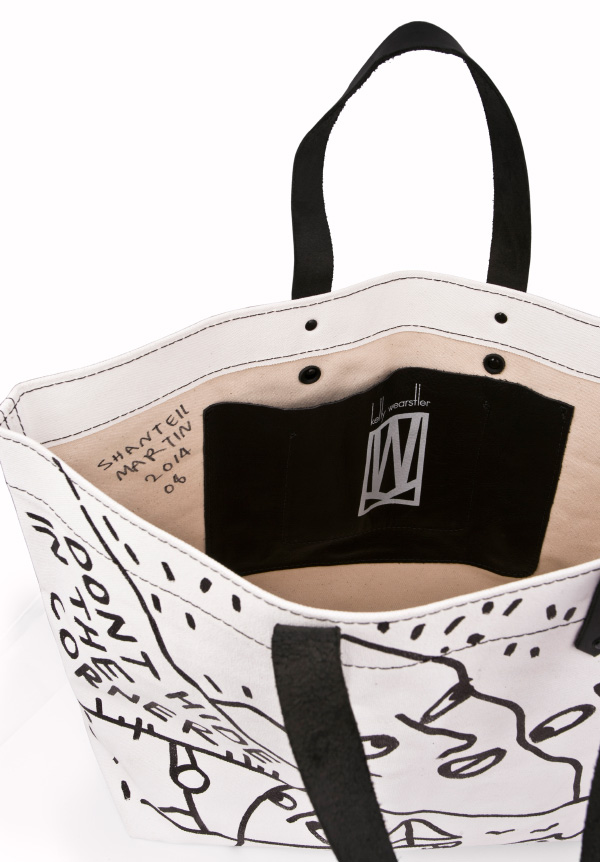 Martin signs every version of the limited-edition canvas-and-leather Tote Bag.

4. What role do art and design play in your lives?

Wearstler: It’s my whole world. In my design work, we often commission artists to do furniture or painting. I love going to museums and galleries and artists’ studios. It’s about constant learning and educating your eye, your soul and your hand.

Martin: To me, designing is solving problems in an artistic way. I would love to design a building from scratch, something that not only looked good but also made people feel good.

Wearstler: Shantell, you could do drawings on handmade tiles and then we’d have them glazed and use them as building material, for floors, a statement wall or entryway.

Martin: Or a swimming pool. I have a master plan to move to L.A., and, Kelly, you might be seeing a lot of me if the plan works out.

5. If you two finally got to spend some time together in each other’s cities, what would you do on your girls’ day out?

Wearstler: I would take Shantell to the Rose Bowl flea market, where she can really soak up the spirit of L.A. and see old and new furniture and art.

Martin: I’d probably take Kelly to lunch at NeueHouse, which is a good place to hang out and see people, and then say let’s just hang out in my studio and make stuff. [Laughs] I admit it: I’m a really bad host.