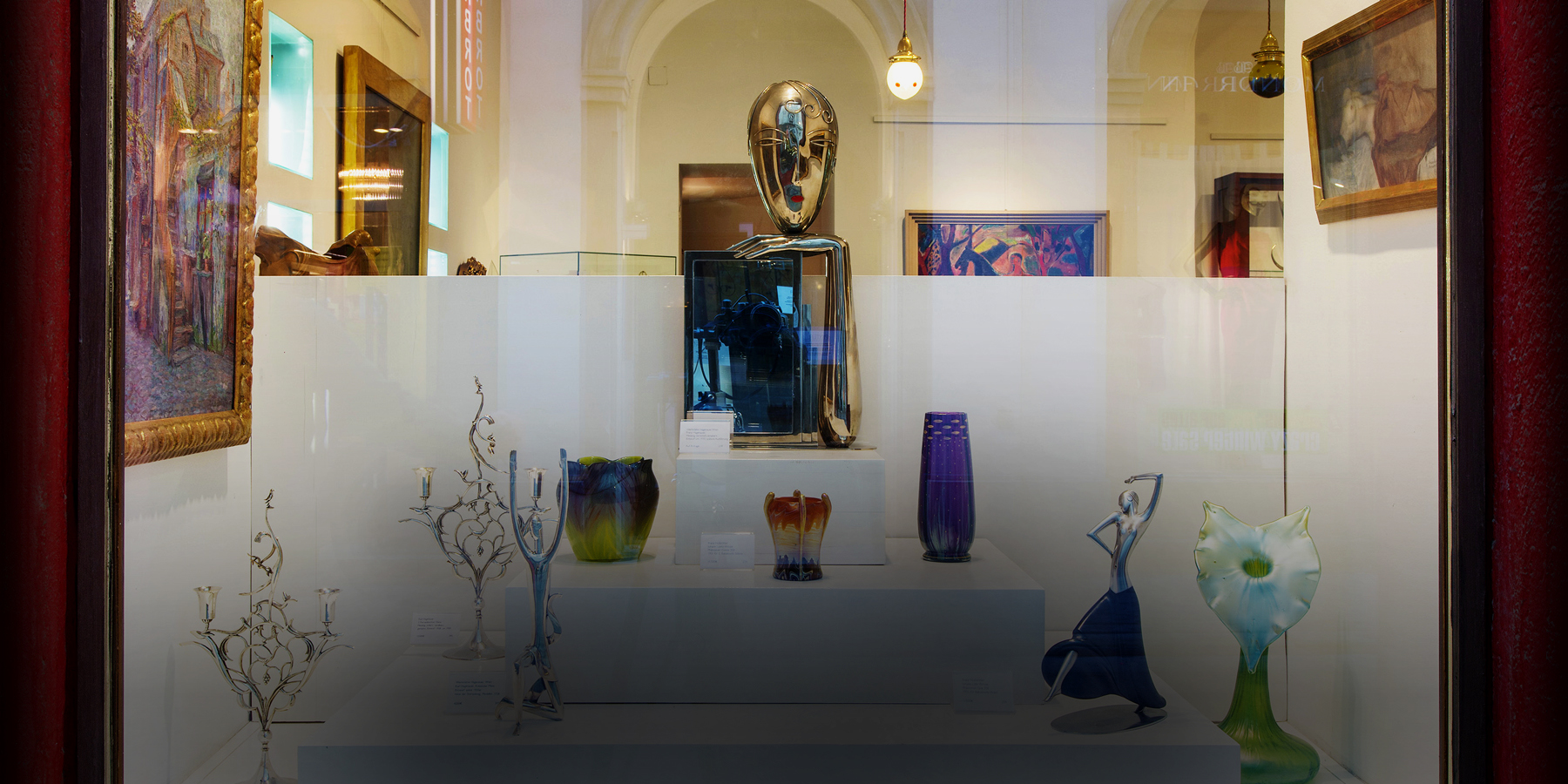 In the heart of Vienna, the two young brothers behind Kunsthandel Kolhammer offer exquisite decorative objects by the famed Wiener Werkstätte as well as Art Nouveau glass, paintings, furniture and more, bringing a modern-day sheen to Austrian antiques. 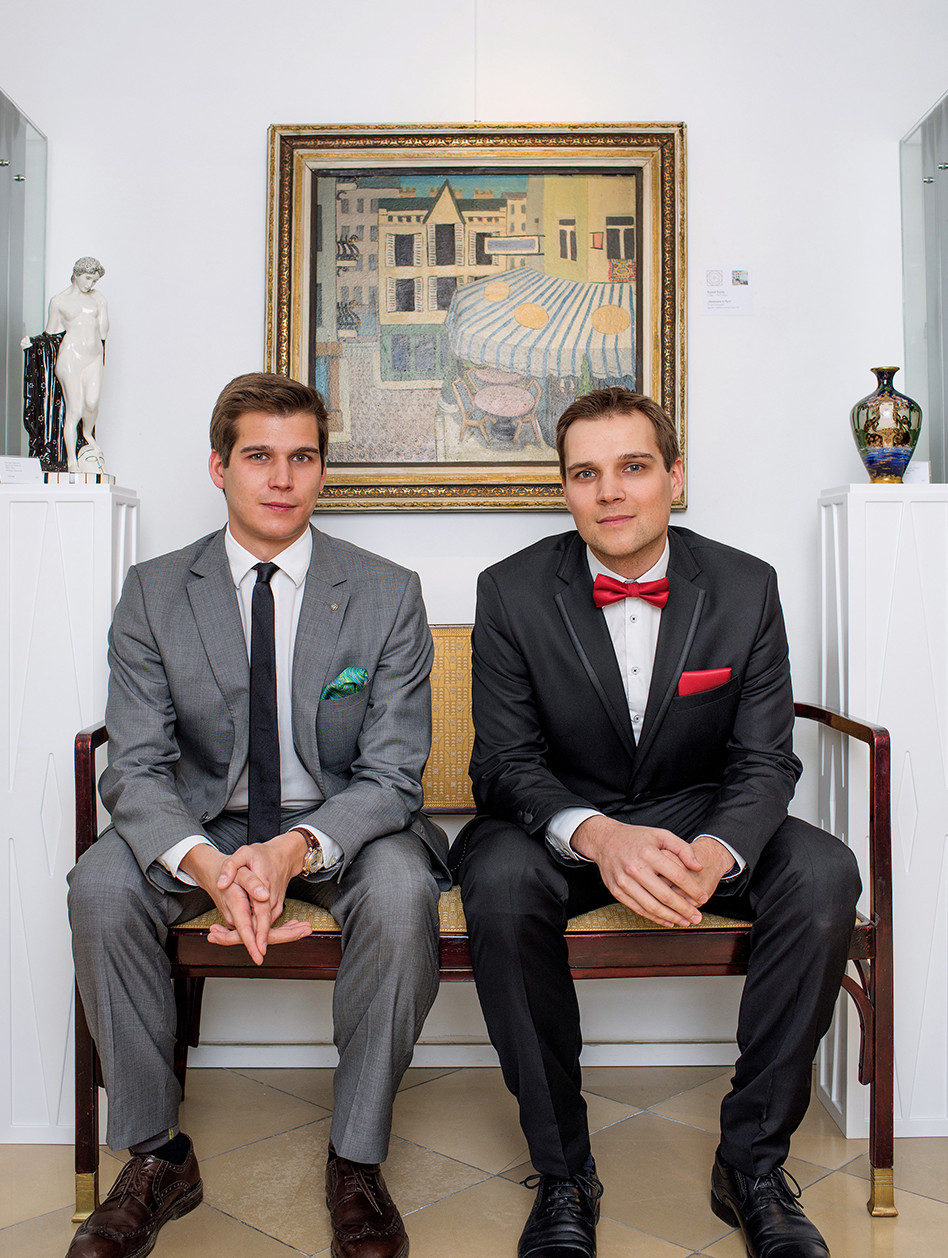 February 23, 2015Brothers Nikolaus (left) and Florian Kolhammer opened a gallery specializing in rare pieces by the Wiener Werkstätte, among other treasures, in the heart of Vienna, Austria, in 2012. Top: Among the items that beckon in the window of Kunsthandel Kolhammer are, at left, a pair of 1928 Diana candlesticks by Karl Hagenauer, one of the leaders of Viennese design, and, at right, a 1920s Hagenauer Werkstätte sculpture of Josephine Baker.

It’s noon on a chilly November day in Vienna. As bells from half a dozen nearby churches ring, the Kolhammer brothers, Nikolaus and Florian, are standing on narrow Plankengasse in front of their shop, Kunsthandel Kolhammer.

Florian, 29, points to a ceramic figurine in the window, Helen of Troy, by the Wiener Werkstätte architect and designer Michael Powolny. The 17-inch nude from 1907, with one foot on a warrior’s helmet, holds a cloak glazed in black and adorned with white six-pointed stars.

“It’s one of the rarest ceramics he ever made,” says Florian. “One sold at auction at the Palais Kinsky for over fourteen-thousand euros in May last year.”

The Helen figure is not standing alone in the window. Alongside it is a 1910 Josef Hoffmann bracelet whose design features delicate gilded-silver leaves and branches. “Only thirty different bracelets were recorded in the archives of the Wiener Werkstätte, and only ten by Josef Hoffmann, so this is one of those,” he says.

In the shop’s other window stands a radiant clear glass vase with dark blue stripes from 1910 by the architect Otto Prutscher, a Hoffmann pupil.

“The vase was sold for only two years by the Wiener Werkstätte. We believe that maybe two or three in the world exist nowadays,” says Florian. “We’re always trying to have rare and high-quality pieces. They’re very important to us.”

The tour of Viennese works continues inside the shop, but the windows are crucial, if only because the gallery occupies a mere 60 square meters, small even by the delicate proportions of Vienna.

“We’re always trying to have rare and high-quality pieces. They’re very important to us.” 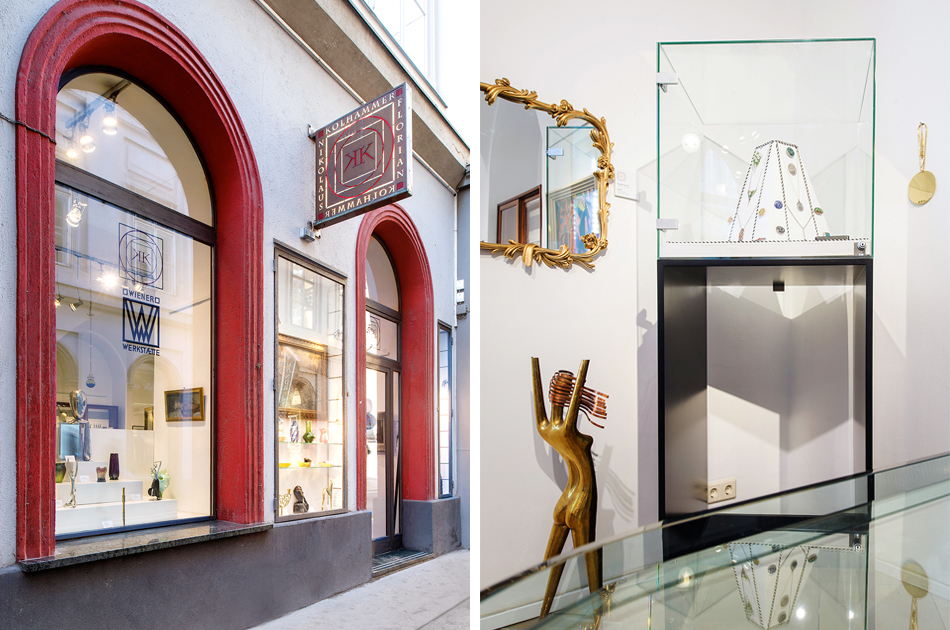 Left: The gallery occupies a central location off the Stephansplatz, a bustling square home to Vienna’s cathedral. Right: A giltwood mirror, ca. 1946, by Oswald Haerdtl (a pupil of Josef Hoffmann), hangs inside the gallery, with an arresting sculpture called Nude at the Beach, 2013, by Karl Schmidt, displayed below it. 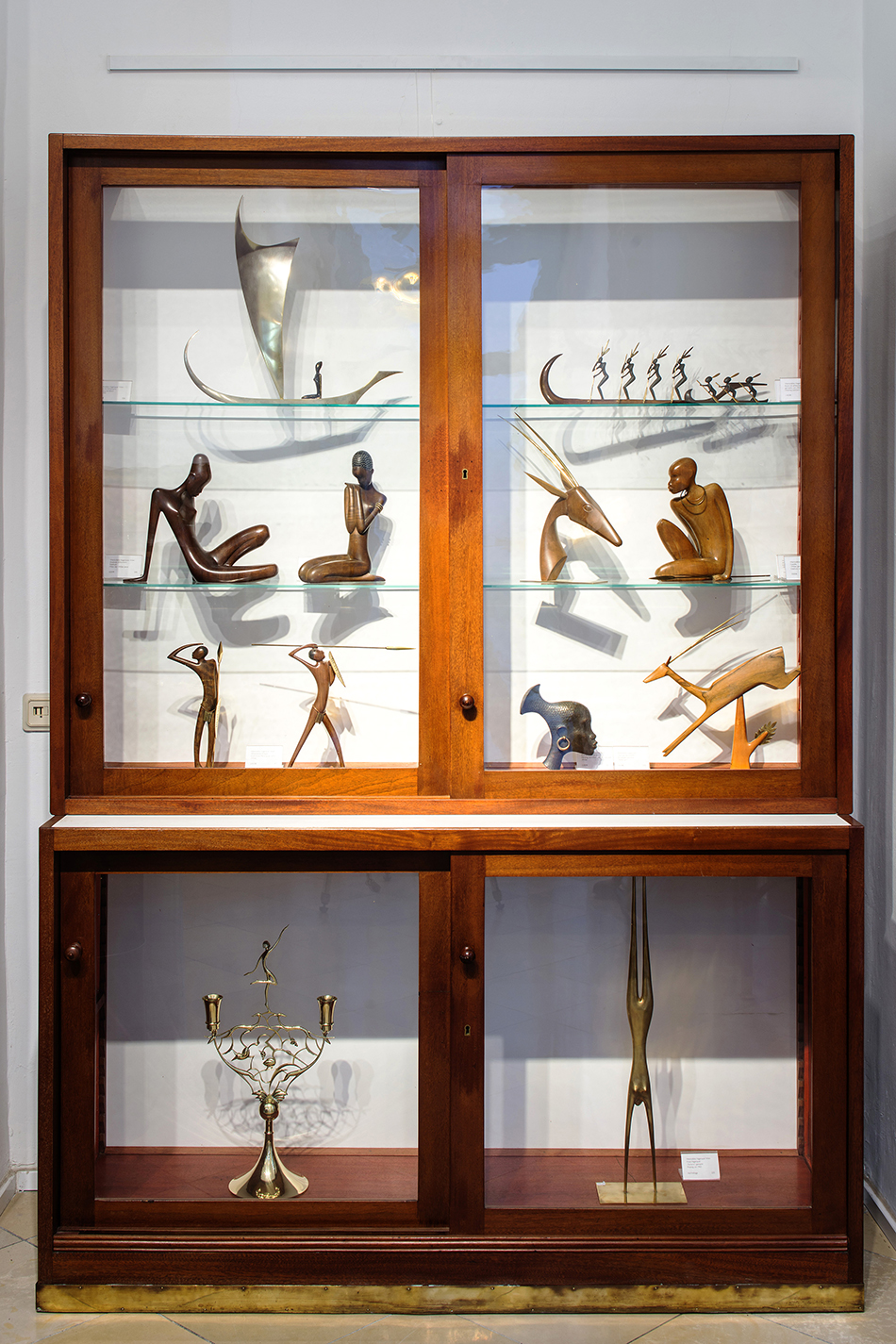 From the 1930s through the 1950s, the Werkstätte Hagenauer produced many pieces inspired by Africa, including, at top left, a ca. 1935 nickel-plated brass sailboat. The carved-wooden figure of a seated woman below that and the nickel-plated wood-and-brass kneeling female sculpture beside her are both from the 1950s. Underneath these, the brothers have displayed a 1950s brass-and-wood sculpture entitled African Scout.

The brothers have run the gallery for more than two years. Their roots in the trade run deep. Both their parents are dealers; their mother operated a gallery dealing in antique clocks across the street. Their father sells 18th- and 19th-century paintings and folk art. “Our home was filled with beautiful objects, not a place for wild play,” said Florian, who left law school to join the business, after apprenticing in art restoration. For Nikolaus, 26, “there wasn’t much doubt that I would work in art or architecture.”

When they opened in the summer of 2012, the local press welcomed them as Vienna’s youngest dealers, “tweeting the Jugendstil,” as the Viennese daily Die Presse memorably wrote. True to their generation, they have brought a new approach to the art business. “We have a strong internet presence,” says Florian of the gallery, which joined 1stdibs in 2013, remarking that the web has enabled them to connect with collectors all over the world, including those in Asia.

Yet the draw of Vienna itself, an international cultural destination, is one of their strongest assets, the Kolhammers note. Collectors know that the best works in Viennese styles are to be found there, says Nikolaus: “Vienna was and still is a very good marketplace.”

And Vienna hasn’t lost its tradition of service to clients, stresses Florian. “We can give the customer something they’d never get from an auction house. We can give them a much better personal…” he pauses. “Betreuung,” he says, settling on a German word that means a combination of support, care and trust. “This is something that no auction house can provide.” 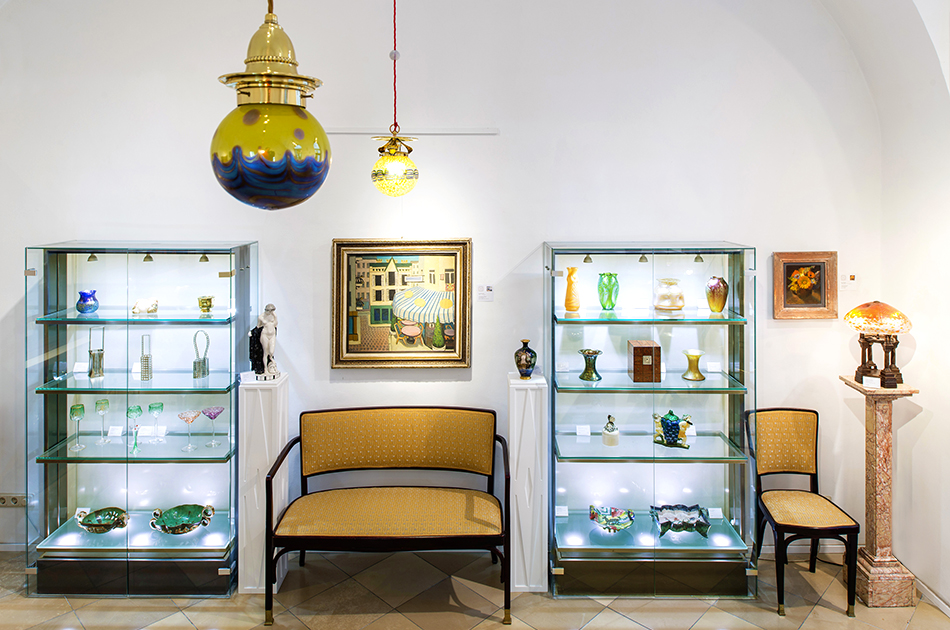 Faubourg St. Antoine, 1954, by Rudolf Richly hangs above a settee that’s part of a ca. 1900 furniture suite by the architect and painter Koloman Moser for J. & J. Kohn. Overhead hangs a pair of Jugendstil-style glass lighting fixtures (left and right) created by Johann Lötz Witwe around 1902. 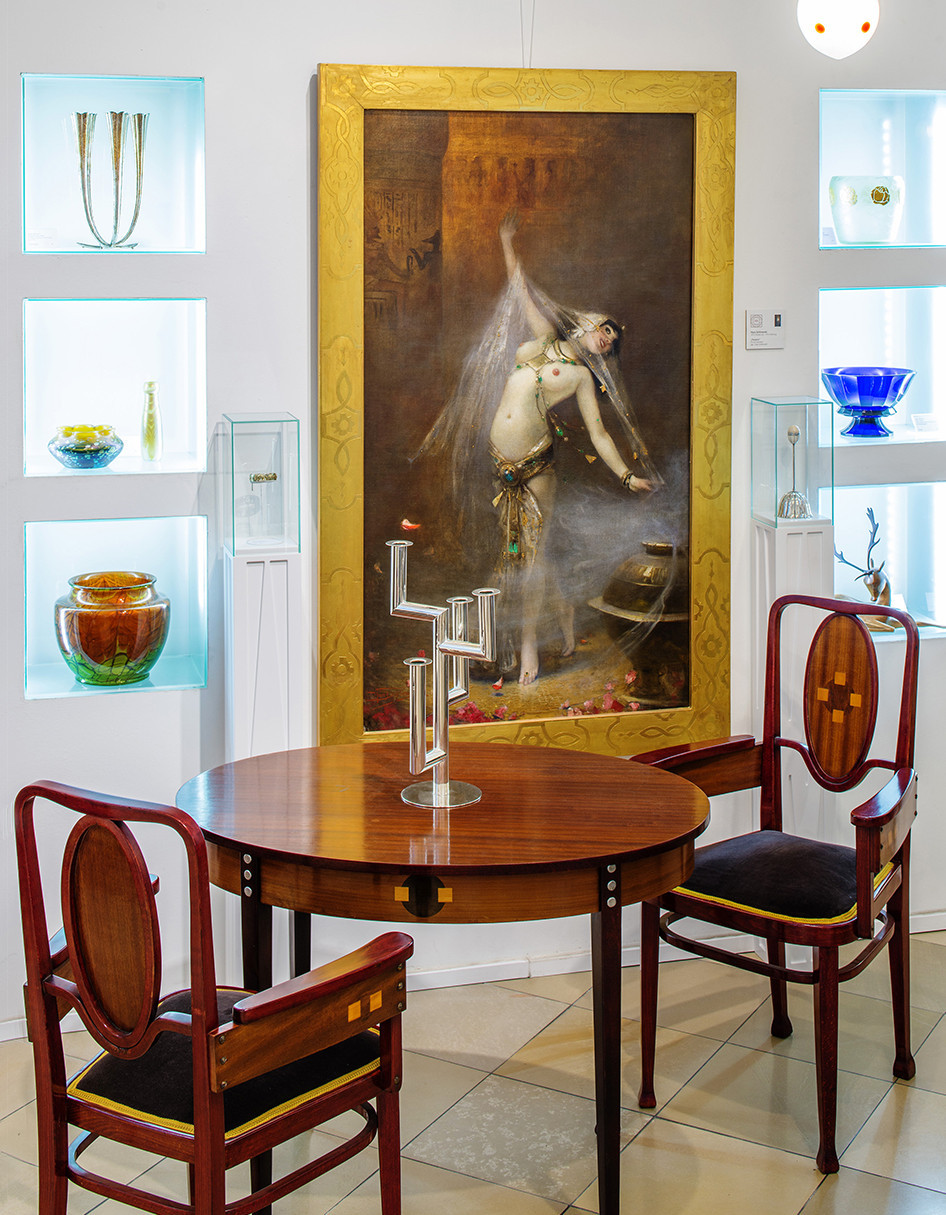 Hans Heinrich Schlimarsky’s Egypt Dancer, ca. 1890, hangs beside a rare ca. 1908 dining set by Marcel Kammerer for Thonet Austria. The silver candelabra atop the table is by Josef Hoffmann for the Wiener Werkstätte and dates to around 1927.

Half of the Kolhammer’s business is Jugendstil glass — vases and bowls by the likes of Adolf Beckert and Johann Lötz Witwe. But the brothers are showing customers more than exceptional works from that school. One special offering is a bust in hammered brass from the Werkstätte Hagenauer. This futurist (for the time) effigy, titled Tala Birell (1930), depicts a Viennese actress from Flash Gordon films. To Americans, Birell is unknown, yet to Austrians she is an icon, all the more so as a space-woman in bronze.

Also catering to Central European taste is the painting The Rhinemaidens and Alberich, 1909, by the Austrian symbolist Eduard Veith. It depicts a scene from Richard Wagner’s opera Das Rheingold in which river nymphs encounter the dwarf Alberich, who confesses his love for them. The spectral maidens pulsate against the picture’s night sky in the same dark red and green hues that collectors can find in the glass that the Kolhammers have on display. It doesn’t hurt business that the Vienna Opera is less than five minutes away on foot.

Soon after the church bells go still, a visitor arrives: Paterfamilias Alfred Kolhammer inviting his sons to lunch. “We do this as often as we can,” says Florian. Vienna being Vienna, you can tweet the Jugendstil around the world and still have a schnitzel around the corner with your father.

The Kolhammer brothers share their thoughts on a few choice pieces