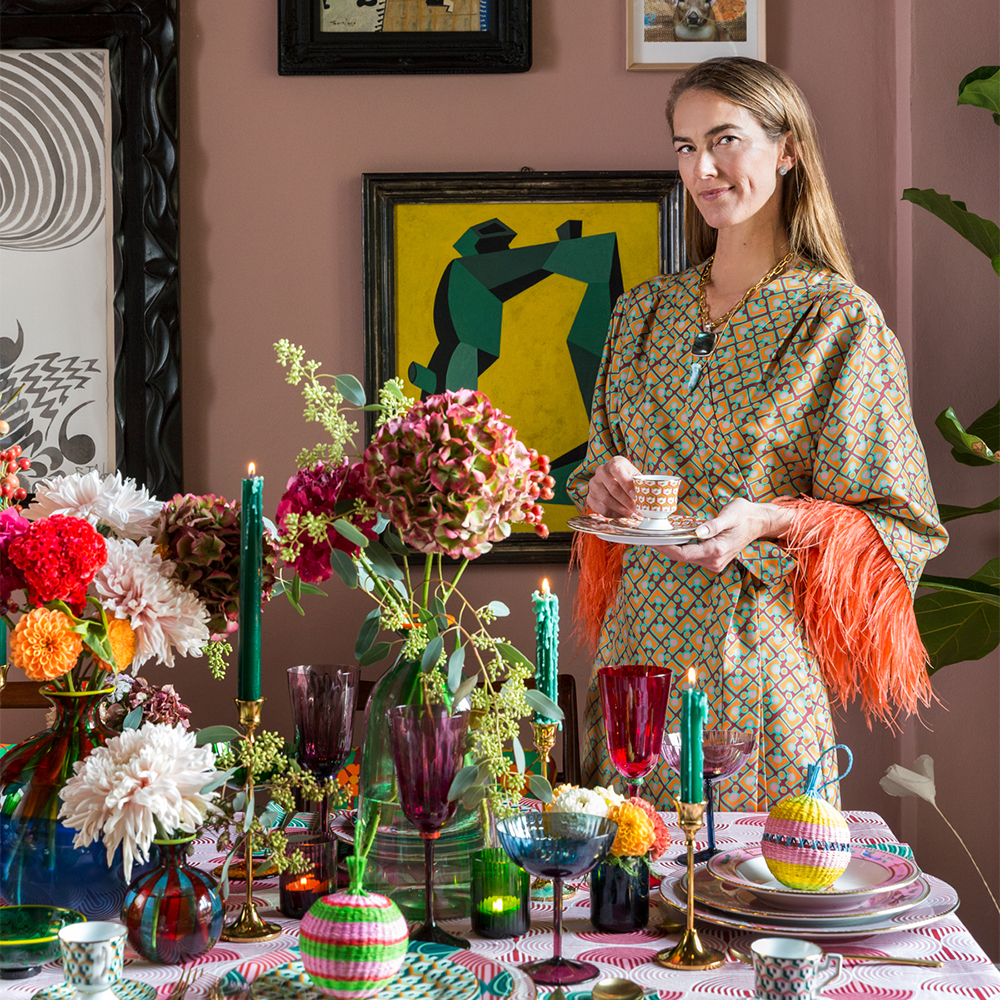 California-bred, Milan-based J.J. Martin credits her Italian friends with teaching her the rhythm of the table.

November 18, 2021“My dad was a hunter, fisherman and epic camper,” says Los Angeles native J.J. Martin. “We’d eat those freeze-dried meals that you add water to and have trout for breakfast. Of course, my mother would bust out a big meal and a set table on birthdays and other special occasions. But I come from a family of volleyball players and surfers — no one who was into the table. I did not grow up entertaining.”

How to explain, then, the explosion of color, pattern and style that Martin, founder of fashion and homewares brand La DoubleJ, conjures in her apartment in a 1910 Gothic Revival palazzo in Milan she calls home? The maximalist tablescape features her first collection of tableware for 1stDibs — including dessert plates, espresso cups and saucers, a round china “goodie jar” (to be used for candies, mints, condiments or whatever you wish), tablecloths and more. The decor includes a 1stDibs exclusive — vintage furniture reupholstered in her jazzy 1970s-inspired fabrics — and pieces from Milanese galleries Rossanna Orlandi and Nilufar.

“I did not learn this in Pacific Palisades,” she says, “I learned it on the via Durini, by being in Giorgio Armani’s closet and attending events at Dolce & Gabbana, from the way Rossanna Orlandi sets her table and from Angela Missoni’s fabulous parties. My Italian friends taught me the rhythm of the table, how service should work.”

Her entrée into this rarefied world was as a fashion journalist for Harper’s Bazaar, The Wall Street Journal and Wallpaper. She traveled to Italy on assignment for these publications 20 years ago and never left. Her boundless enthusiasm and keen eye for design — as well as her own boldly colorful, pattern-obsessed personal style — made her an instant fixture on the Milanese fashion scene.

Six years ago, she decided to strike out on her own with a vintage fashion business but soon found that sourcing was difficult and there was only ever one of each item. She evolved it into a much-loved ready-to-wear and home goods site carrying products of her own design.

Each of the place settings, which mix and match the chargers, dinner plates and soup bowls she designed, is topped with a large woven straw ornament. “I like to leave a little gift on guests’ plates,” Martin says. The multihued glassware is all by Murano-based Salviati.

“I work with a great Japanese florist here in Milan,” she adds, pointing to the ebullient display of hydrangeas, coxcombs, dahlias and berry branches on the table. These floral ornaments are stuffed into handblown vases La DoubleJ commissioned from Salviati. “I don’t like single-bloom bouquets,” she says emphatically. “I think that’s lazy. I only do it when I’m pinched for time. It should be like mixing people at a dinner party. There are exceptions, of course, like French tulips. I also like using a single gigantic, high-impact flower in a vase that looks like it’s sprouted from the earth.”

Another thing Martin does not believe in is reserving tableware pieces for one type of use. “I like a multitasking product,” she says, noting that the votive candles are glowing from inside tinted whiskey tumblers, which she also presses into service occasionally for wine. And the aesthetic is not all 1970s psychedelic. A soup bowl appears quite old — for good reason: The pattern was originally produced in the mid-1800s in Verona for Napoleon III and encrusted in gold. Of course, Martin could not help tweaking the historic design with her unique sense of color. “I washed it in bubblegum pink,” she enthuses. “Isn’t it fabulous?!”

The surfeit of china, she explains, is not just part of her signature maximalism but a necessity in Milan. “Italians are gods and goddesses of plated dishes because they don’t want different kinds of food touching on a plate,” she explains. “You can’t have risotto and a vegetable on the same plate, and the salad cannot touch anything else.”

Sitdown dinners across Milan and other Italian cities are always preceded by the aperitivo. “It’s one of the most important things in Italy, almost more than dinner,” Martin says. “It is never in the dining room. Sometimes, you’ll have the aperitivo buffet in the dining room, but you bring those olives, meats and mozzarella into the living room. That explains the rainbow of Salviati glassware adorning coffee tables in her mauve-painted living room, which features a sumptuous Deco rug from Nilufar Gallery, a plum-colored velvet sofa and a 1960s chair covered in one of her own fabrics.

Often Martin turns dinner into a long extension of the aperitivo hour, passing small plates of food around for people to enjoy with their wine or Aperol spritzes. “Passed dinners accommodate people who come late, and Italians always show up late,” she says. “Inevitably, they also invite a friend. At first, I hated these customs. I’d invite people for seven o’clock, and it would just be me and one or two guests. Everyone else would come at nine. It drove me crazy. But you just have to get over it.”

Another way of putting that is to cultivate acceptance, which jibes perfectly with Martin’s highly personalized spiritual practice. Her style excludes almost nothing. It is equally welcoming to 19th-century opulence, 1970s color and pattern, 1980s baroque maximalism, the clean lines of 1990s minimalism and so on. “It’s a mix between my own galactic weirdness, my California background and my Milanese upbringing,” she concludes. And who could argue? 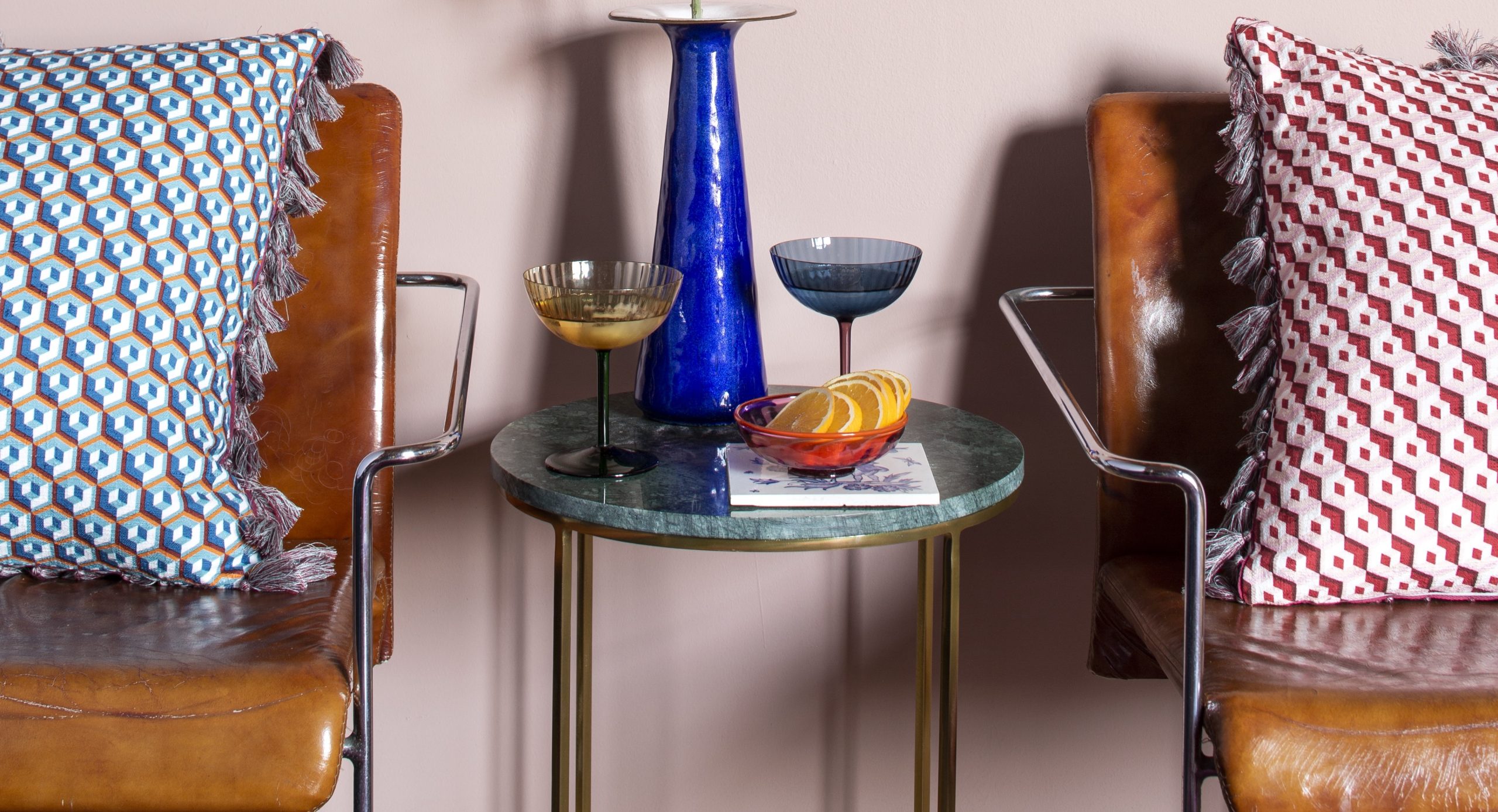