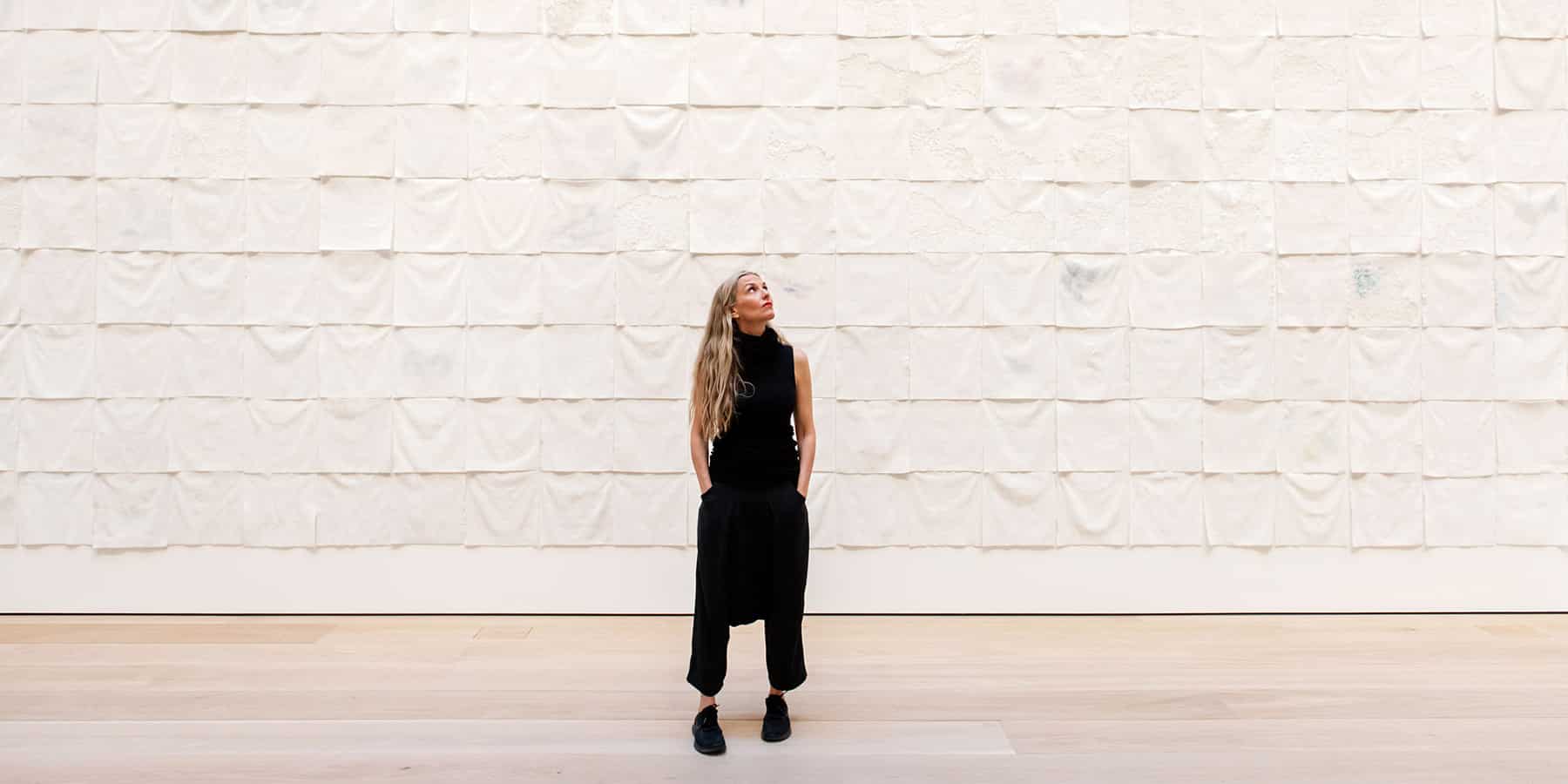 The blue-chip gallery recently opened a huge new space in Chelsea that feels both connected to the city and otherworldly. 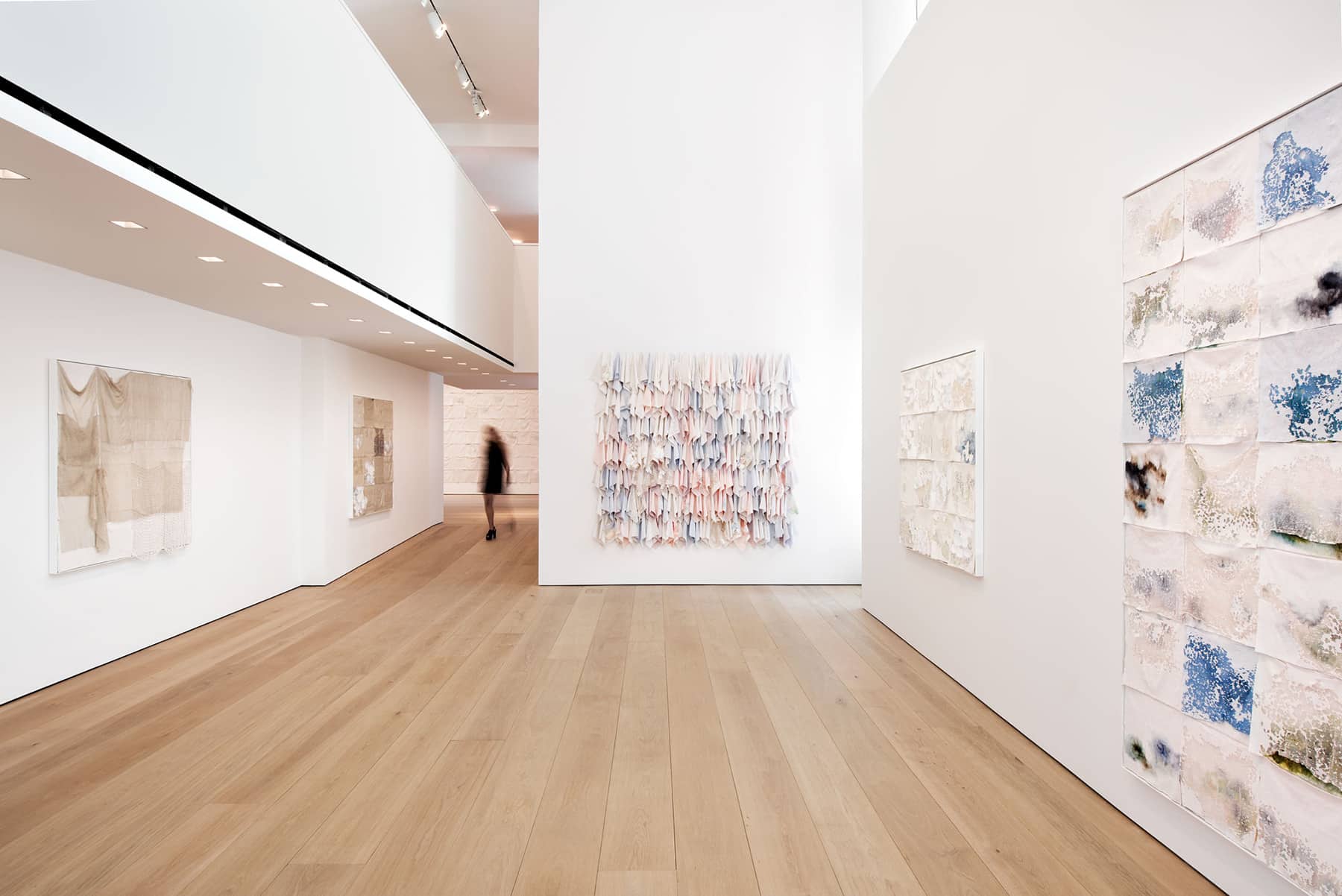 An installation view of “Liza Lou: Classification and Nomenclature of Clouds” at the new three-story Lehmann Maupin flagship in New York’s Chelsea art district. Top: Lou stands before The Clouds at her solo exhibition.

Since its founding by Rachel Lehmann and David Maupin in 1996, Lehmann Maupin has been known for championing the work of groundbreaking artists like Teresita Fernández, Do Ho Suh, Mickalene Thomas and Nari Ward. Now, the New York gallery (which also has outposts in Hong Kong and Seoul) has opened a new three-story space in Chelsea.

It is designed, like the building that houses it, by Peter Marino, and Maupin says that he and Lehmann wanted their gallery’s interior to be welcoming to a cross-section of artistic practices. Marino met the challenge, he explains, by incorporating “diverse, flexible floor plans and views” that “provide unique opportunities for artists whose work varies wildly in scale and medium.”

Lehmann and Maupin are no strangers to working with A-list architects: Three of their previous spaces were designed by Rem Koolhaas’s firm, OMA. When redevelopment forced them to vacate the last of those addresses, also in Chelsea, it became an opportunity to collaborate with another star talent.

Marino was designing an 11-story luxury condominium building near their old location, on 24th Street and 10th Avenue, that included gallery space, and the two partners didn’t hesitate to grab both the space and the architect. “Peter is a friend and a client,” Maupin says. “He’s an art collector, and he understands artists and what they need.” Lehmann and Maupin worked with Marino and the building’s developers, the Victor Group, to realize their vision. 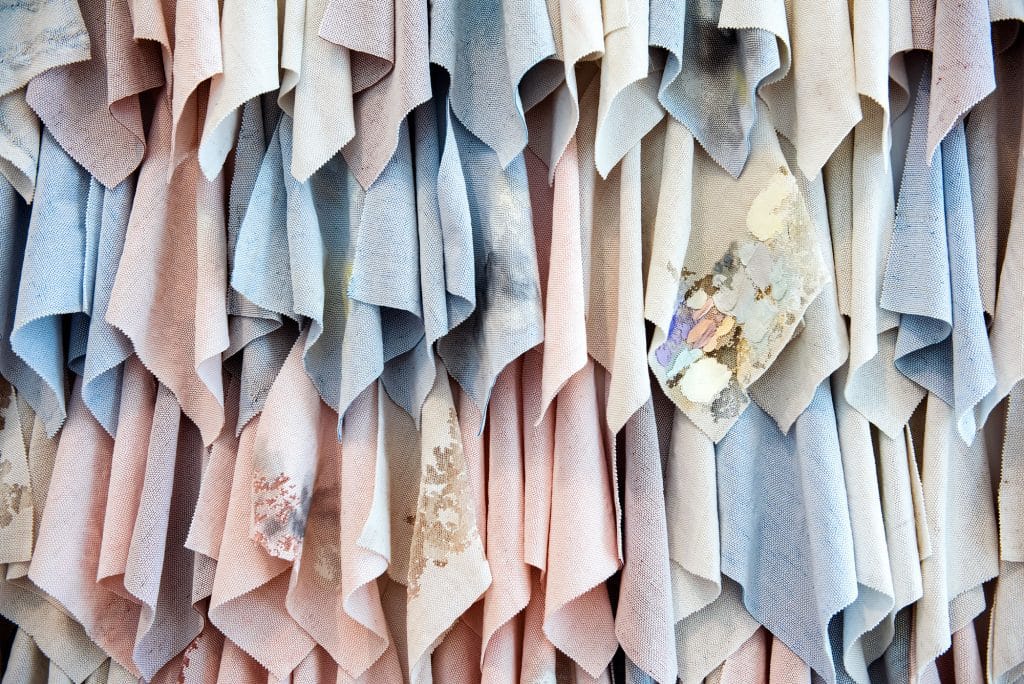 A detail of Pannus, made from oil paint on woven glass beads 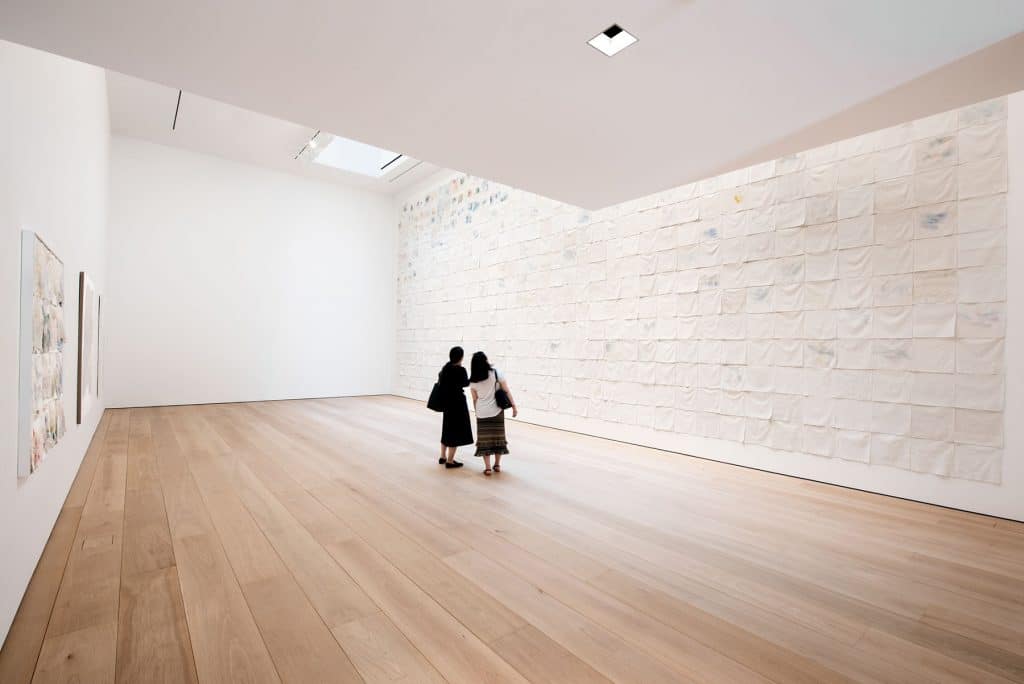 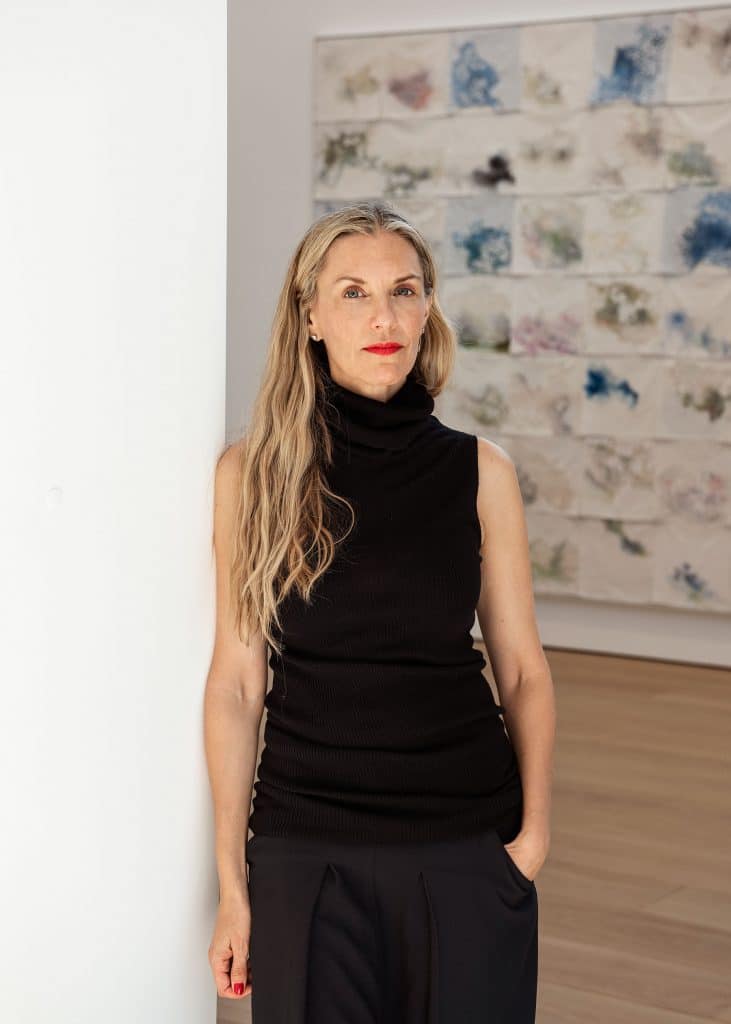 Liza Lou’s new show at Lehmann Maupin is her first in New York in a decade. 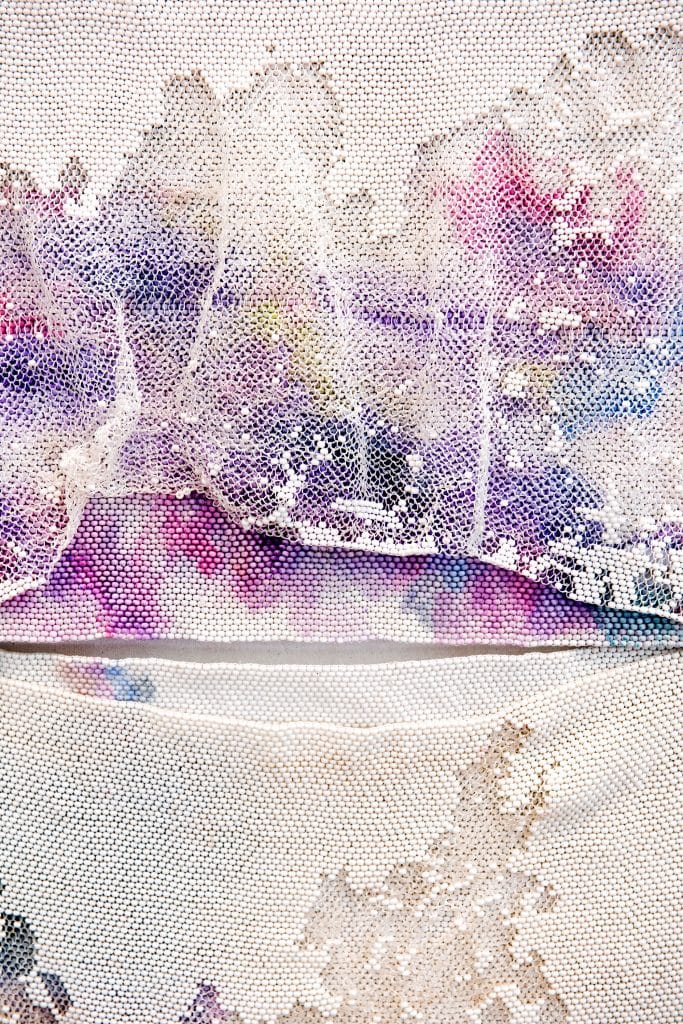 A detail of Pyrocumulus. 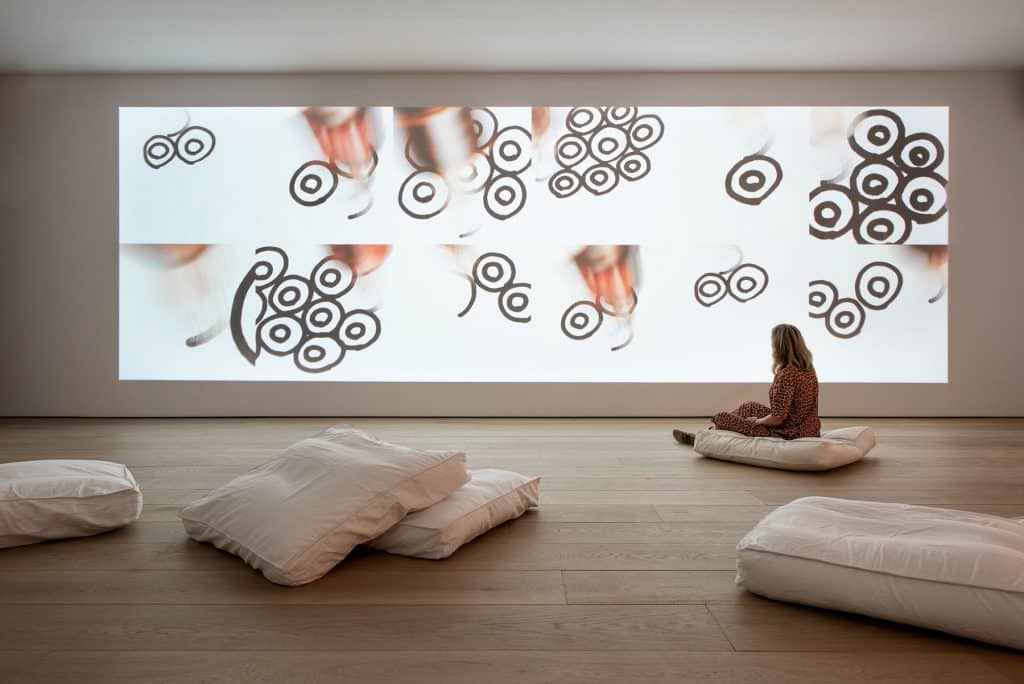 On the basement level, a visitor watches Lou’s Drawing Instrument. 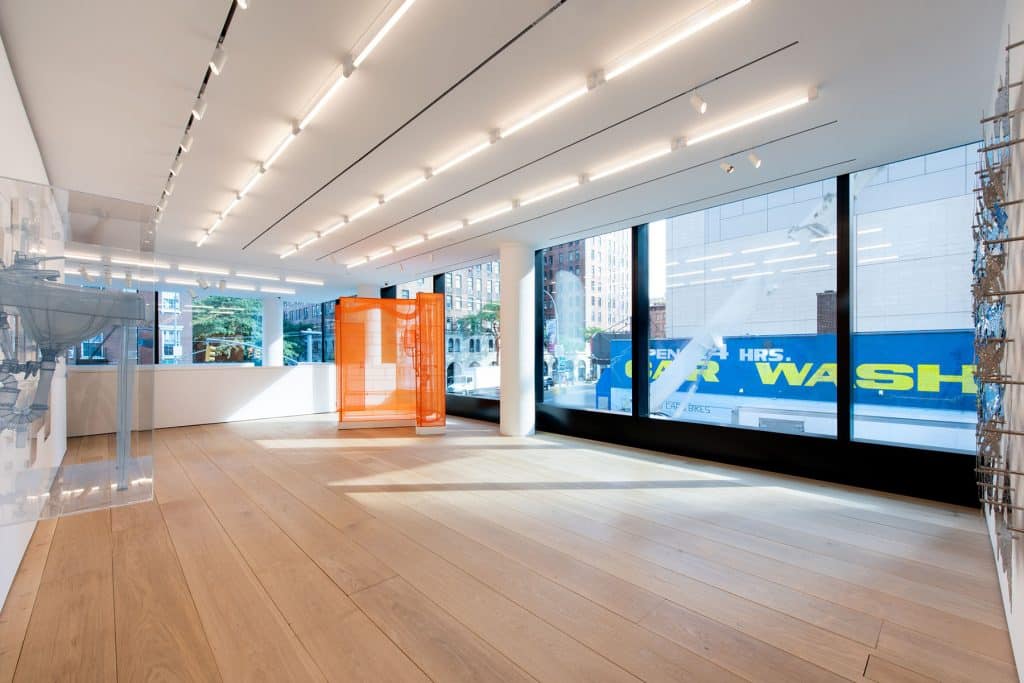 On the mezzanine level is Do Ho Suh‘s Apartment A, 348 West 22nd Street, New York, NY 10011, USA (left wall) The orange piece on the right is the artist’s Boiler Room, London Studio. 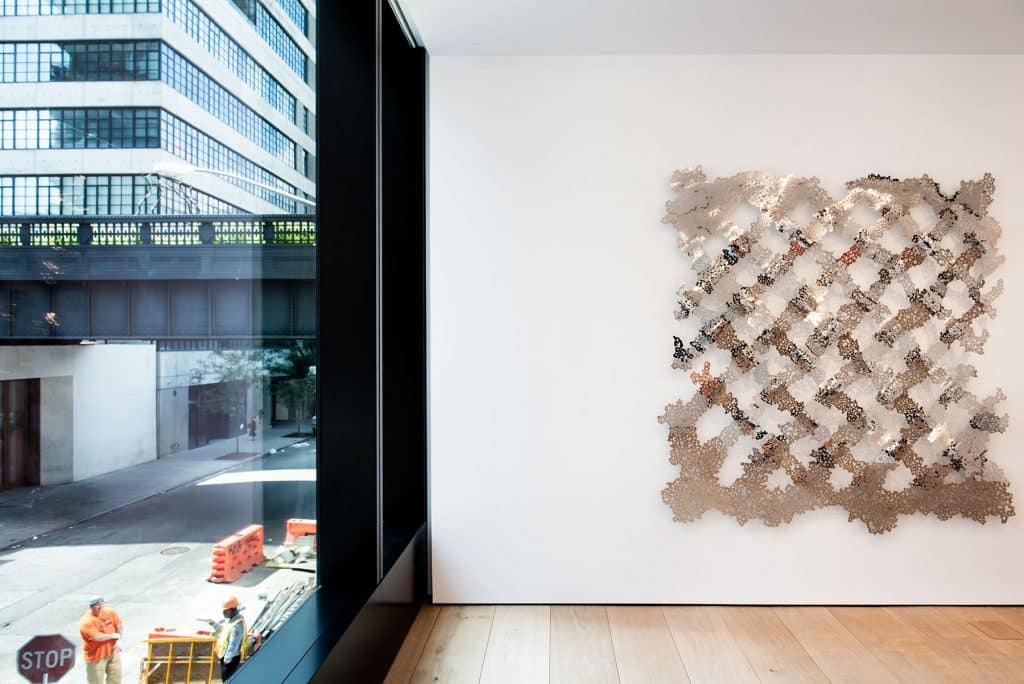 Also on the mezzanine is Untitled (Fence) by Teresita Fernández. The windows here look out at the High Line Park.

The gallery’s main room, a corner space on the ground floor, has 23-foot ceilings. Partial-height floating walls provide hanging space while allowing, says Marino, “a direct connection to urban New York City” through the building’s glass-and-metal exterior. At the back of the ground floor is an equally high-ceilinged room with full-height walls, which is illuminated by a long skylight and is for large-scale pieces.

On the mezzanine level is a balcony offering a bird’s-eye view of the skylit room, a successful feature of a former space that Lehmann and Maupin wanted to reprise; there is also a space for private viewings and special exhibitions with windows overlooking West 24th Street that provide natural lighting as well as a view of the High Line. The basement contains a space, designed as a “black box,” for video and performance-based works; this is where Catherine Opie’s film The Modernist will be shown in November.

The architectural vocabulary is classic Chelsea, with lots of white walls. But Marino has added elegant touches acknowledging Chelsea’s “maturation” from its industrial roots, including bespoke wide-plank oak floors and a half-inch reveal between the walls and floor that is even carried into the enclosed service stairwell. 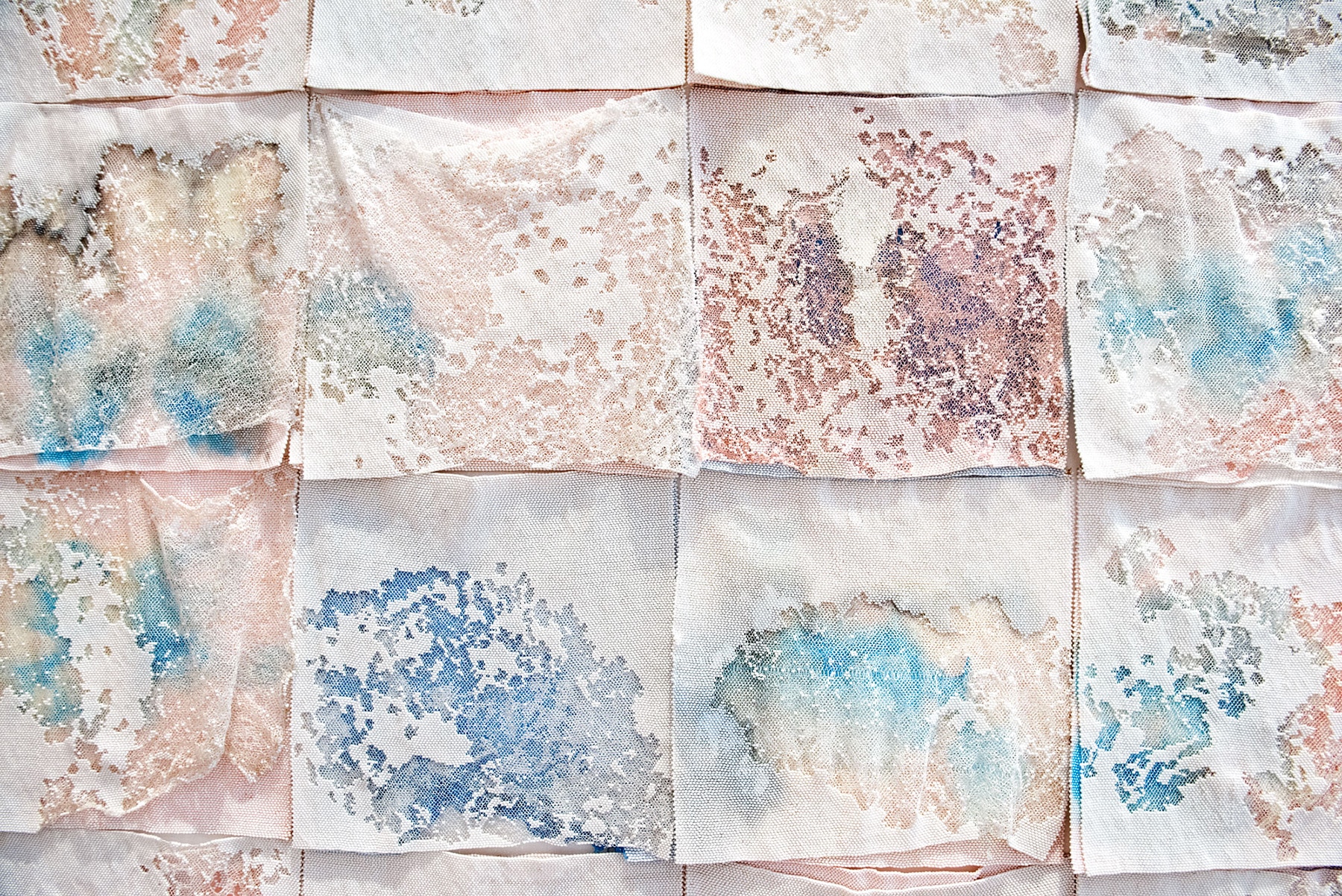 A detail of Nacreous, composed of squares and rectangles of woven white beads that were painted and distressed

These varied spaces provide a welcoming home for the gallery’s inaugural exhibition. “Liza Lou: Classification and Nomenclature of Clouds,” which runs through October 27, is the first New York show in a decade devoted to Liza Lou. The artist, who is based in Durban, South Africa, and Los Angeles, creates works from tiny glass beads in collaboration with a team of South African craftswomen. She is perhaps best known for her breakout installation The Kitchen, a full-size replica of the title room that she covered in millions of colored beads between 1991 and ’96. Lou’s work since then, however, has become progressively more abstract.

Many of the pieces in this show, she says, explore the question “What does it mean to use a beaded surface instead of a canvas?” These works are composed of squares and rectangles of woven white beads on which Lou has created ethereal, cloud-like forms by adding thick daubs of oil paint or by smashing areas of the beads with a hammer to expose the underlying paint-stained matrix of threads.

The skylit space is devoted to one such piece, the 50-by-23-foot The Clouds, which was recently shown at the 21st Biennale of Sydney. The mezzanine-level balcony offers a good view of its upper rows, marked by splashes of vibrant color. The room, Lou says, “has so much natural light — it passes across the walls, and you can look up and see an actual cloud.”

The show also includes two ink drawings depicting clusters of tiny circles that look very much like beads, but in two dimensions. A film about these works is being shown in the basement-level black box. Lehmann Maupin’s West 22nd Street location (which the gallery rented while its new space was under construction and is keeping for now) is showing several pieces from Lou’s “Terra” series, sculptural works made of beads stitched together, which seem to take on lives of their own. In this recent body of work, “you see my hand,” Lou says. “I’m using the history of my practice, but on top of it is a looser, more spontaneous gesture.” 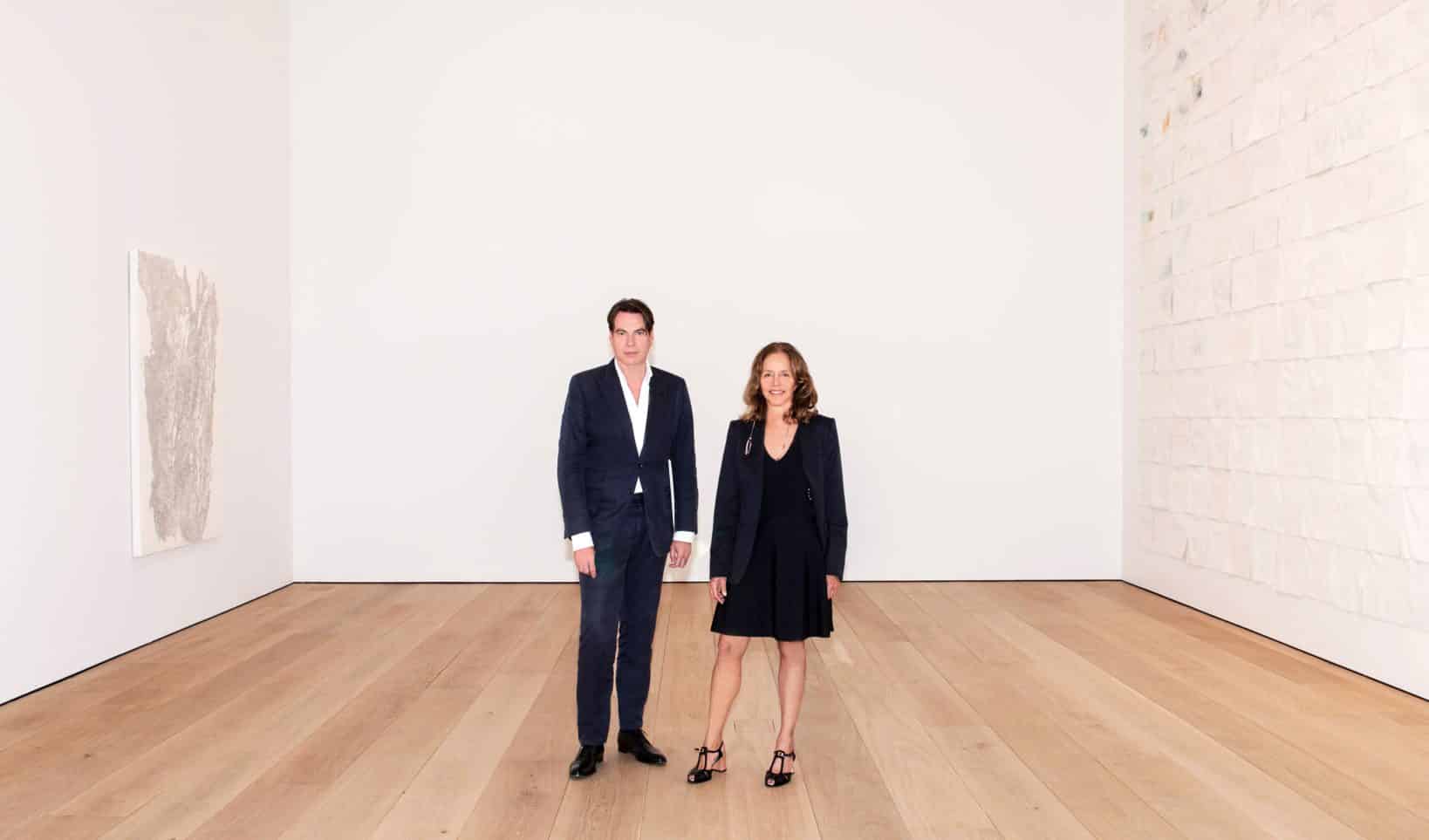 David Maupin and Rachel Lehmann, who founded Lehmann Maupin in 1996, stand in the main room of their new space, which features soaring, 23-and-a-half-foot ceilings.

Maupin and Lehmann are delighted not just with the space but also with the synergy between the architecture and the art installed in it. “We love the flow of the space,” Maupin says, “and the way there are so many different experiences.”