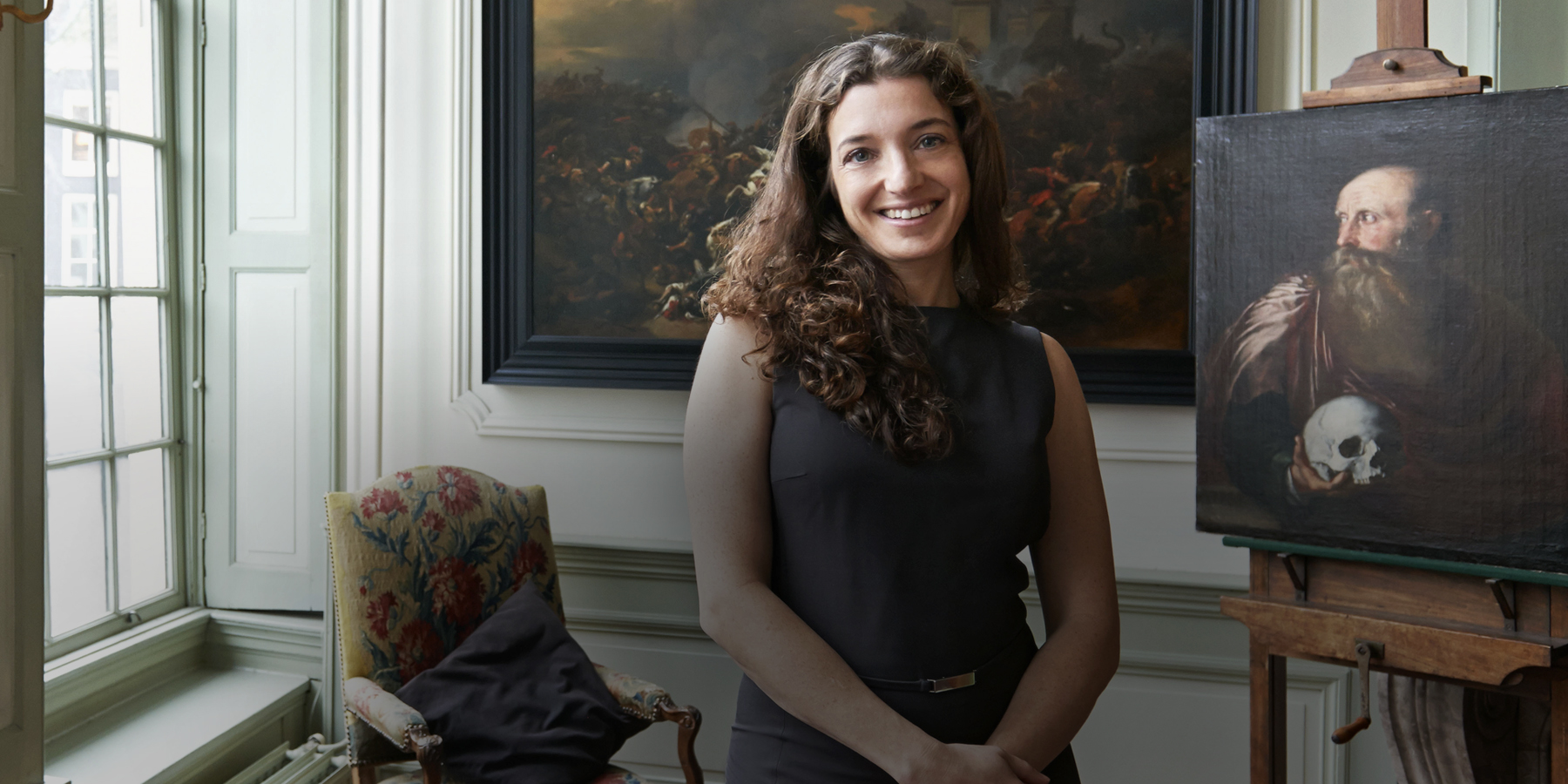 The author of a new novel based on Rembrandt’s 1632 painting The Anatomy Lesson of Dr. Nicolaes Tulp explores the intimate connections — both contemporary and historical — that writers, their readers and, indeed, you and I feel when viewing iconic works of art.

June 4, 2014A print of Rembrandt’s The Anatomy Lesson of Dr. Nicolaes Tulp, 1632, hung in the study of the author’s immunologist father. Photo courtesy of Mauritshuis Royal Picture Gallery, The Hague; Top: A Rembrandt painting that captivated her as a child inspired Nina Siegal to write her new novel, The Anatomy Lesson (photo by James Stokes).

I must have been around 10 or 11 when I first started looking at Rembrandt’s The Anatomy Lesson of Dr. Nicolaes Tulp, the 1632 painting that’s at the center of my new novel, The Anatomy Lesson. Really looking, that is. A 9” x 11” poster version hung in my father’s study at home, and I was equally repulsed and fascinated by the image: a dead man lying on a dissection slab, his arm flayed open and its tendons caught between forceps held by a man I presumed to be a professor. There were lots of other men gathered around the body, too, dressed in dark cloaks with wide white ruffs clearly out of a whole different century.

My dad had picked up the print at the Mauritshuis Royal Picture Gallery, in The Hague, when he took his “grand tour” of Europe in 1965 following medical school. By the time I was nine, he was the chief of immunology at Mount Sinai Hospital in New York, where, a year later, he started to see patients whose immune systems had totally shut down. The first was a Dominican woman, and then there was a slew of gay men. It was the beginning of the AIDS epidemic, although there wasn’t yet a name for it.

My father told me about what he was seeing, and I often visited the hospital and saw for myself. As the numbers of cases swelled and AIDS panic ensued, my father would often say, “I feel like a doctor in the Dark Ages, facing the plague, and all he can do is help people die.” At night, when I’d hear my father on the phone, trying to calm the stricken father who’d had to embalm his own son because the mortuary wouldn’t accept his body, I’d look at that painting and think of those words. 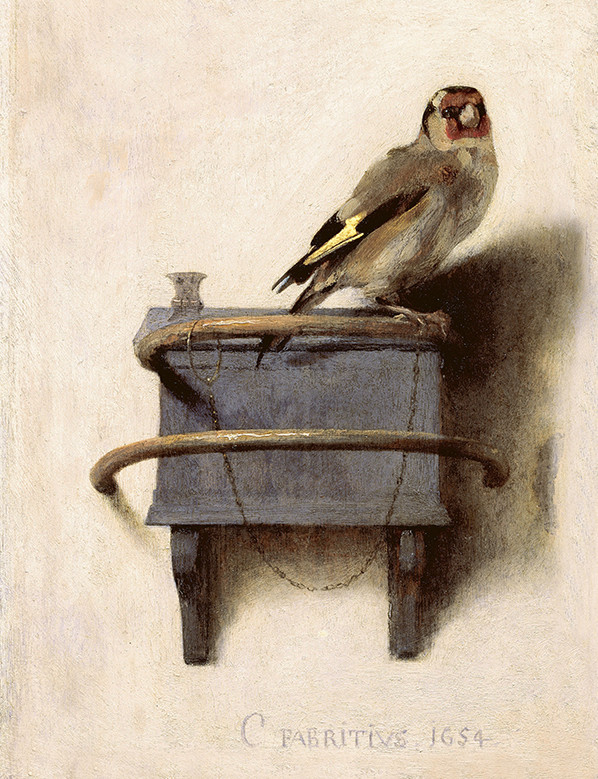 Donna Tartt found inspiration for her latest novel, The Goldfinch, in Carel Fabritius’s 1654 work of the same name, as well as in contemporary Las Vegas. Photo courtesy of Mauritshuis Royal Picture Gallery, The Hague

We can assign so many meanings and narratives to works of art that don’t relate in any way to their original context. When art moves us, it often does so precisely because it attaches to something specifically of our own times. We look at a painting and, without being conscious of it, bring our contemporary society and personal experiences to bear on it, even if it was painted 400 years earlier in a country 4,000 miles away. For me, The Anatomy Lesson of Dr. Tulp, in that unlikely way, started out as an AIDS painting.

I recently read that Donna Tartt found inspiration for her novel The Goldfinch — which was recently awarded the Pulitzer Prize and centers on Carel Fabritius’s 1654 work of the same name — while she was on a trip to the Nevada desert. She felt that somehow the crassness of the Las Vegas strip was exactly the right location to bring out the delicate and poignant nature of that very small work of Dutch Golden Age art.

Tracy Chevalier, author of Girl With a Pearl Earring, hung a poster of that Vermeer painting in her bedroom when she was 19, and she describes her fascination with “the ambiguous look” on the girl’s face that inspired her novel, written at the age of 37, “to be a mass of contradictions: innocent yet experienced, joyous yet tearful, full of longing and yet full of loss.” In other words, her novel was, in some ways, the projection of the emotional life of a 20th-century 19-year-old onto a servant girl in 1650s Delft.

For the British author Michael Frayn, for example, a missing Bruegel masterpiece becomes the centerpiece of Headlong, a simultaneously erudite and farcical novel of manners set in the late-20th-century British countryside. For novelist Debra Dean, Italian Renaissance paintings summon both the 1941 Siege of Leningrad and a contemporary struggle with late-stage Alzheimer’s in Seattle in The Madonnas of Leningrad.

“We assign so many meanings and narratives to works of art that don’t relate to their original context. When art moves us, it’s often because it attaches to something specifically of our own times.” 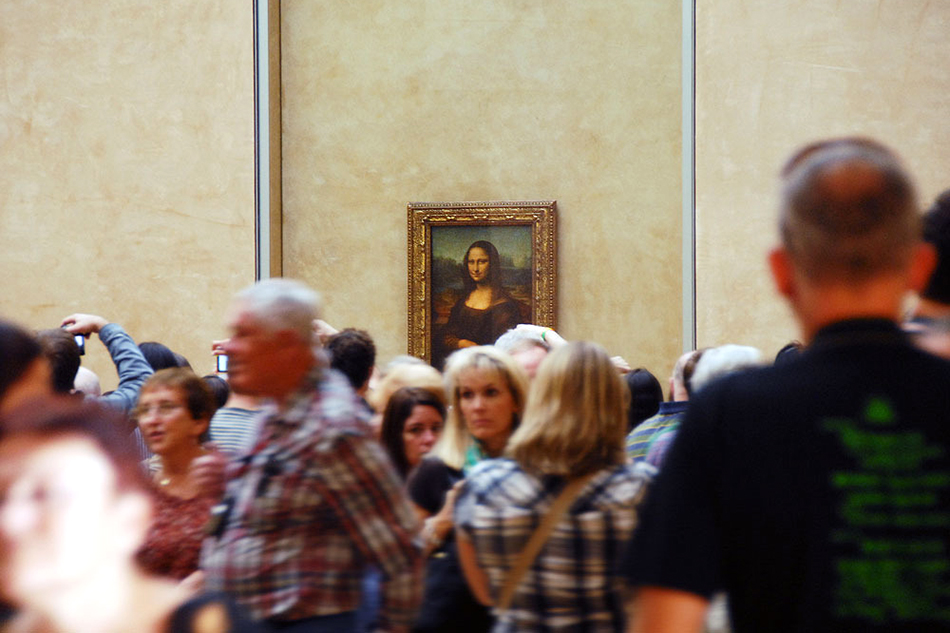 The world’s most famous painting, Leonardo da Vinci’s Mona Lisa, and her enigmatic smile, have elicited five centuries worth of speculation, projection and re-interpretation. Photo by Diana Moss 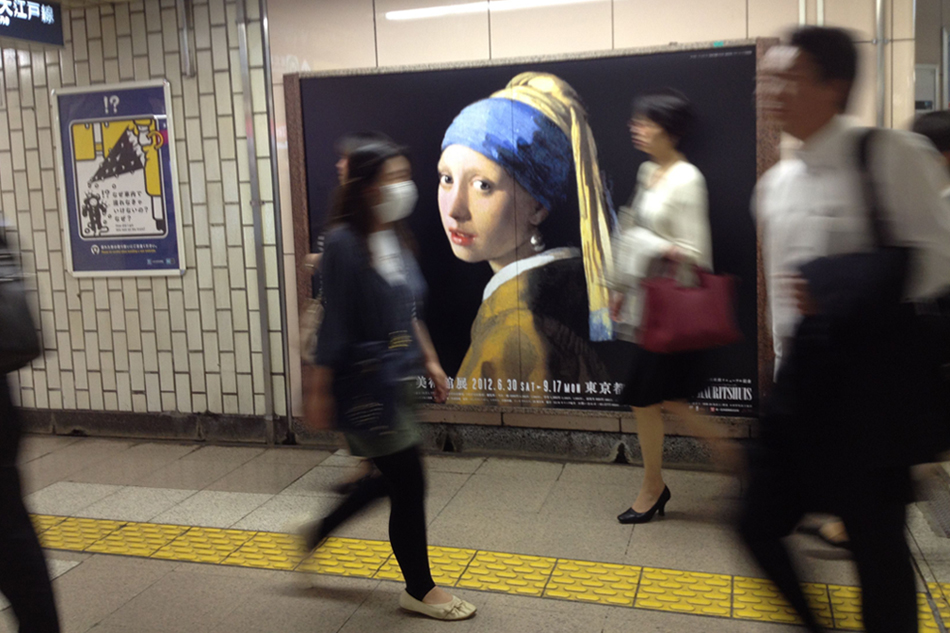 Johannes Vermeer’s Girl with a Pearl Earring, ca. 1665, maintains a strong grip on contemporary culture. A poster in Japan for a 2013 traveling exhibition (courtesy of Asahi Shimbun). 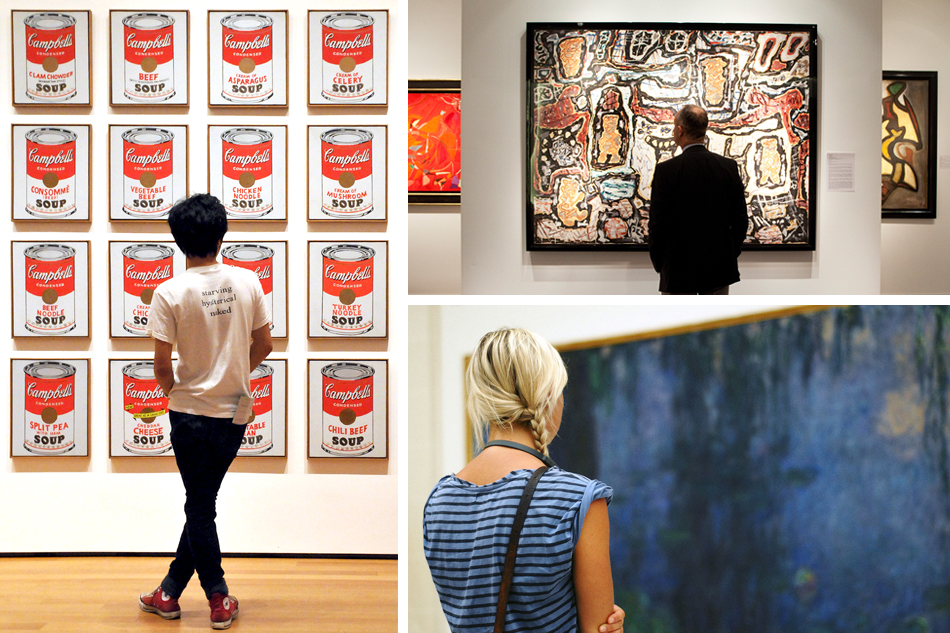 Timeless works of art invite viewers to locate their own experiences within their frames (photos, clockwise from left, by Milo Baumgartner, Loraine Bodewes and Diana Moss). 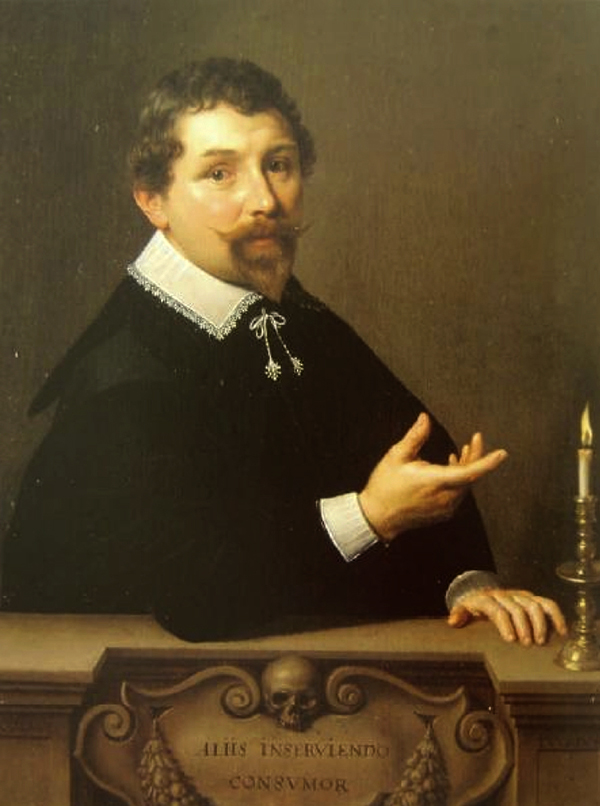 Another portrait of Dr. Nicolaes Tulp, by Nicolaes Eliaszoon Pickenoy, 1633

None of these novels diminish the works of art, or take away anything from the moment in which they were created. In fact, when we talk about the “timelessness” of a masterpiece, part of what we’re referring to is the work’s invitation to carry some part of the contemporary world within its depths. We wouldn’t be able to make imaginative leaps from our own time into the moment when the painting was created without that permeability that the art provides. The role of the novelist is not only to explore our own moment, but to somehow go beyond the confines of our contemporary consciousness and draw us, more authentically, into the universe of the painting itself.

It wasn’t until I was in graduate school, at age 35, that I found out more about the facts behind Rembrandt’s The Anatomy Lesson of Dr. Nicolaes Tulp. I was taking a seminar in the iconography of painting, and our professor gave us an assignment to “read” a painting, or find out more about the narrative within it and I chose the work that had so compelled me as a child.

What I discovered was that the painting was indeed set in a time when doctors had very little understanding about how the human body functioned, and no real tools to combat disease. But they were embarking on a voyage into the human body that was marked with striking pageantry: After a public dissection attended by some 250 of Amsterdam’s physicians, scholars, merchants and noblemen, they’d host a banquet and torchlight parade through town. 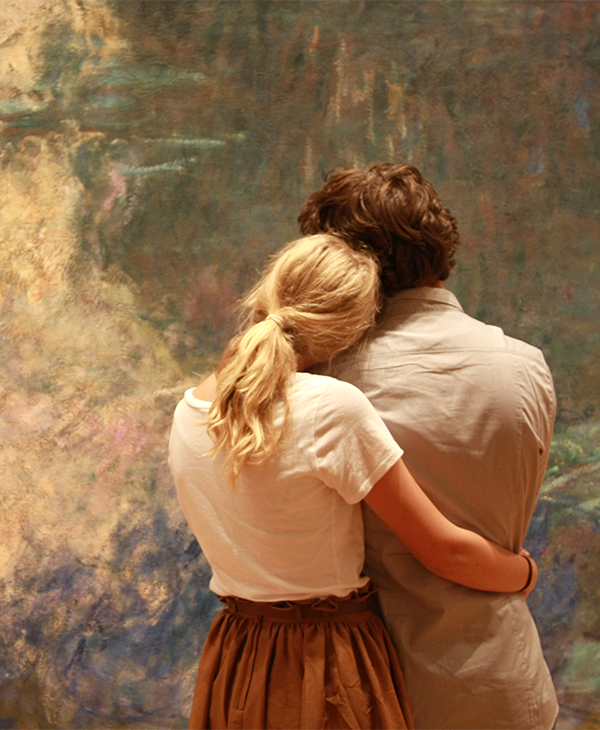 A couple admires Monet’s Water Lilies at the Museum of Modern Art in New York City. Photo by Gibo S

Odd as this may seem to us today, it was a crucial turning point in the history of both science and philosophy, when doctors and other intellectuals dared to look inside the body to ask: Where does our soul reside? Quite luckily, that moment was commemorated by Rembrandt, a painter who — perhaps more than any other artist of any time — painted portraits that seem to reach inside his subjects and capture their very souls.

The way we relate to works of art is never linear. Unless we are art historians or art dealers, we generally don’t start out looking at Dutch Old Master paintings with a 17th-century scaffold around us. We have our present, and we carry it to the work, exploring what is immediately relevant to us — that paradox facing a doctor that reminds us of our own father; the longing glance in a 19-year-old girl’s face that reminds us of our own angst — and then we work our way back into the context, into the life that surrounded the work before it was made.

In the end, the novel I came to write wasn’t set in the 1980s, at the beginning of the AIDS epidemic. It has a totally different plot, set mostly in the 17th century, exploring the story behind Rembrandt’s first major masterpiece though the eyes of the artist and his contemporaries. Still, I don’t think I would have made my way into that story without my father, and AIDS, and the compassion it took for him to treat, and, ultimately, to save the lives of, many strangers who came through his office doors. All of that affected the way I thought about the dead man lying on Dr. Tulp’s dissection slab, about the power of medicine, about the search for the human soul and the power of art to resurrect and redeem.

Nina Siegal is an Amsterdam-based writer whose second novel, The Anatomy Lesson, was published in March by Nan A. Talese/Doubleday. Publisher’s Weekly praised its “masterful use of subtle details, embroidered into beautiful writing.” 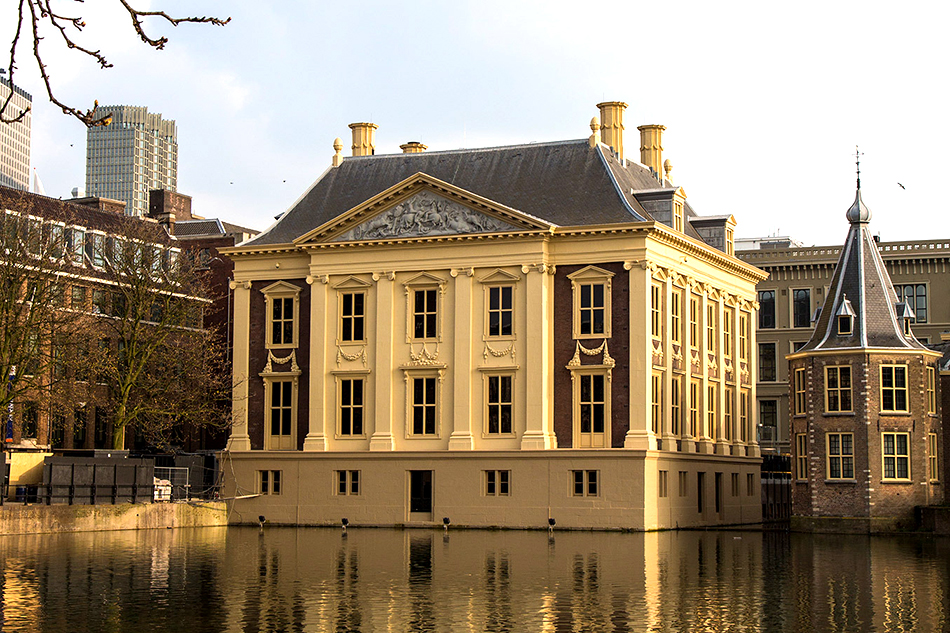 The Anatomy Lesson, the famed Rembrandt painting that inspired Nina Siegal’s book, as well as Fabritius’s Goldfinch and Vermeer’s Girl With A Pearl Earring, all hang in the Mauritshuis Royal Picture Gallery, above, which will reopen this month (June 27) after a renovation and expansion. The Goldfinch will have a more prominent spot in the museum because the Pulitzer Prize–winning novel has made it so popular.