Mark Davis Is Bringing Bakelite Jewelry Back in Fashion

With ingenuity and persistence, the designer retools vintage pieces in the colorful plastic to create gorgeous new gems.

Sustainable-jewelry designer Mark Davis founded his company in 1999 and, with his team, makes everything in his Greenpoint, Brooklyn, workshop. Top: These bangles are all crafted from vintage Bakelite. Some are quite simple, but others have Bakelite or gold inlay whose creation involves complex techniques.

Turning trash into treasure — a process known as upcycling — has taken off of late, thanks in part to the increasing number of luxury consumers interested in eco-friendly brands. Plenty of fashion companies, including Stella McCartney, Vetements, Greg Lauren and Vivienne Westwood, are now converting clothing castoffs into new creations. Mark Davis, a pioneer in jewelry upcycling, takes the idea much further than most, reclaiming a substance largely forgotten by modern designers: Bakelite.

It all started for the native New Yorker after the September 11, 2001, attacks, when the retail market went flat and sales of his minimalist diamond and platinum jewelry ground to a halt. A merchandise manager suggested he make larger-scale pieces at a lower price.

Davis began to consider using vintage Bakelite, which he loved. Baubles made of the colorful material had caught his eye as he browsed the flea markets near Manhattan’s 23rd Street, and he had become fascinated by it after reading an article in the ’80s fashion magazine Taxi. “I started to conduct experiments to try to figure out ways to rework old pieces, but it was difficult, and there was no one to ask about it,” he remembers. He didn’t know, for example, how much pressure to use when sanding the forms or how to secure the gold gem collets he wanted to use in his new designs. “I tried, like, a thousand epoxies until I found an aerospace one that worked,” Davis recounts. “With gold and platinum, you could find people to consult on manufacturing, but for Bakelite, the majority of craftsmen who had worked with it were dead and gone.” 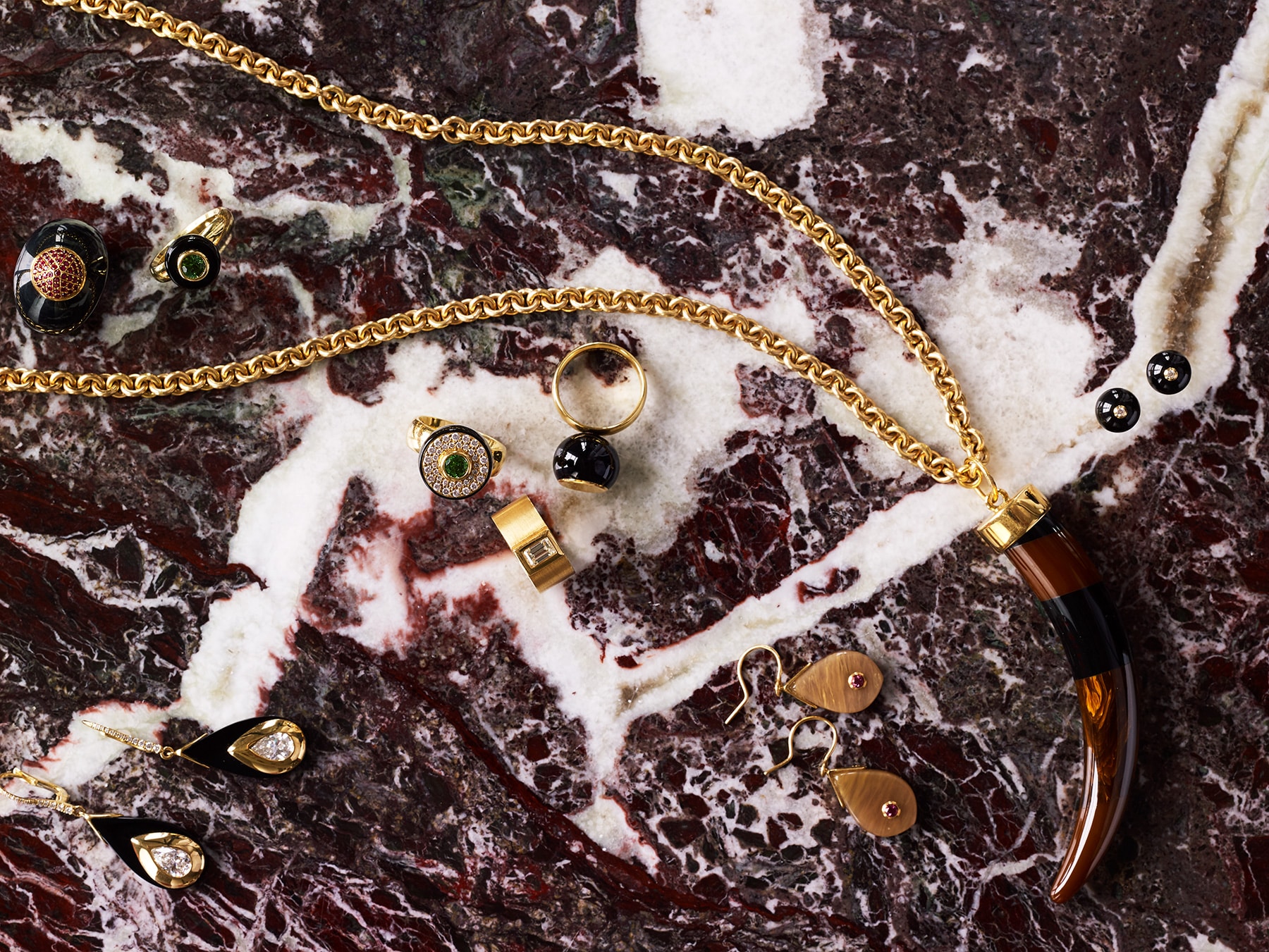 The black earrings in the lower left corner are made from vintage Bakelite dominoes and feature pear-shaped diamonds, each weighing more than a carat, in 18-karat gold bezels. The handmade 18-karat gold chain has a Bakelite and diamond clasp. From it hangs a tusk pendant, hand-carved from laminated pieces of Bakelite, that was inspired by a pendant worn by Diana Vreeland. The ring with a green center stone — a bezel-set tsavorite garnet — was made from a vintage Bakelite oval bead that was cut in half and fitted with an 18-karat gold plate and set with pavé diamonds. All pieces, with the exception of the chain, are one-of-a-kind.

The first man-made plastic, Bakelite — a petroleum-free thermosetting resin — was invented around 1907 by Belgian-American scientist Leo Baekeland. “The material is nearly impervious to heat,” says Davis. “It will burn before it melts.” In fact, it doesn’t melt at all. This property made it an ideal industrial material for early electronics such as telephones, light switches, sockets and toasters.

Each of these bangles began as a solid piece of wood that Davis and his team turned or cut to shape. The three smaller square ones are set with colored gemstones in yellow gold bezels. The round bangles and wide square one are inlaid with precision-cut vintage Bakelite. The top bangle is set with blue sapphires, the center with peridot, and the bottom with yellow sapphires.

Initially, Bakelite came only in black and brown. But during the Depression, it was produced in a rainbow of colors, as designers started using it for jewelry, radios, clocks and games like dominoes, backgammon and mahjong. “Bakelite is very labor-intensive, but it could be made affordably during the nineteen thirties, when labor was cheap,” Davis explains. “After World War II, it fell out of favor because it became too expensive to manufacture. And being the first generation of completely synthetic plastics, newer, petroleum-based plastics were invented that made Bakelite obsolete.”

Davis marshaled all his experience in jewelry to work with Bakelite. He began his fine arts education at New York’s Parsons School of Design and continued at the Fashion Institute of Technology, where he studied every aspect of jewelry making, from rendering formal designs in gouache to crafting jewelry on the bench. After graduation, Davis took a job at Christie’s, where he learned about vintage jewels from the inside out. “During the cataloguing process, I would be handed a large pavé-set diamond brooch and a Sharpie, and I was told to count the stones,” he says. “While it was tedious, I was able to look at mechanisms and see how jewels were constructed and what parts showed signs of wear.” 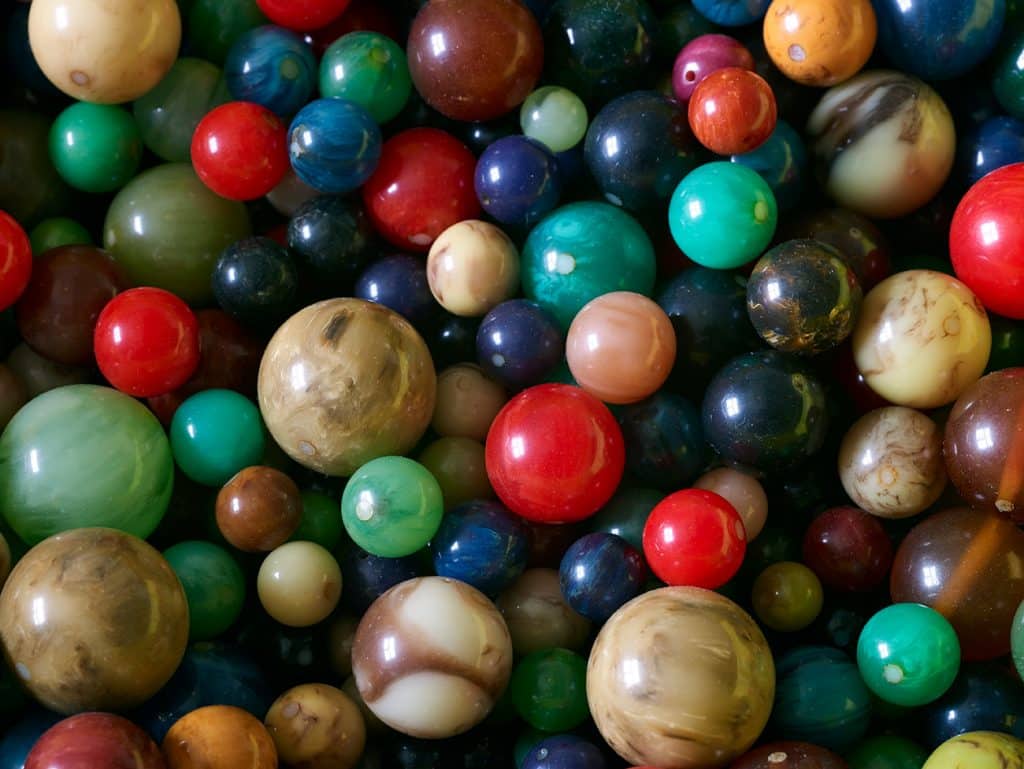 These vintage Bakelite beads, each of which has been processed and polished by hand, will be transformed into pieces like pendants and earrings or the center section of a ring. 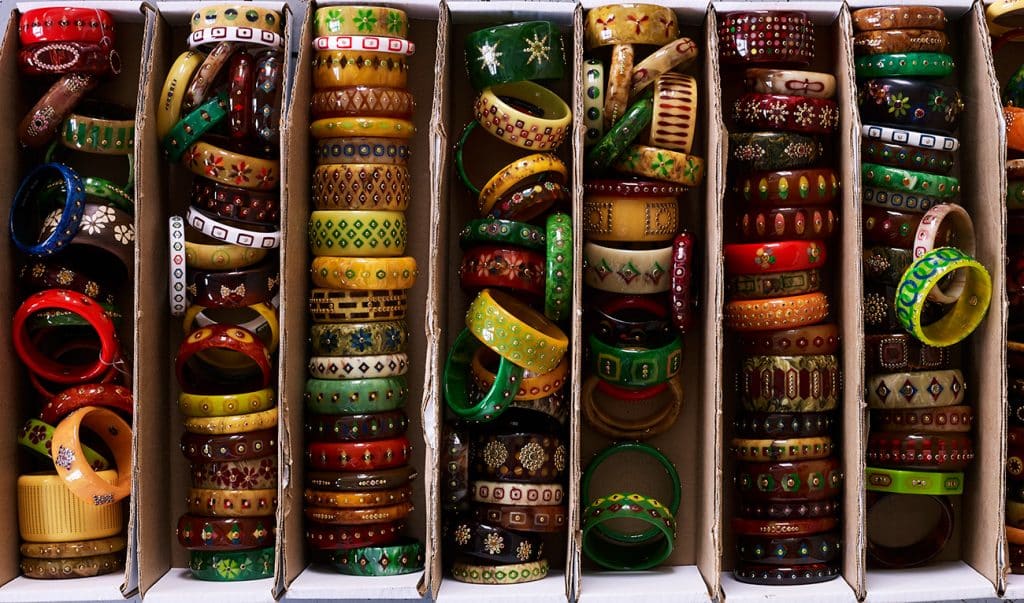 These finished pieces suggest the wide variety and uniqueness of the bangles Davis and his team produce.

Here, Davis discusses with one of his bench jewelers technical issues concerning a custom piece. “Because we work with vintage material, we need to often be creative problem solvers in order to deliver what is requested,” Davis says. 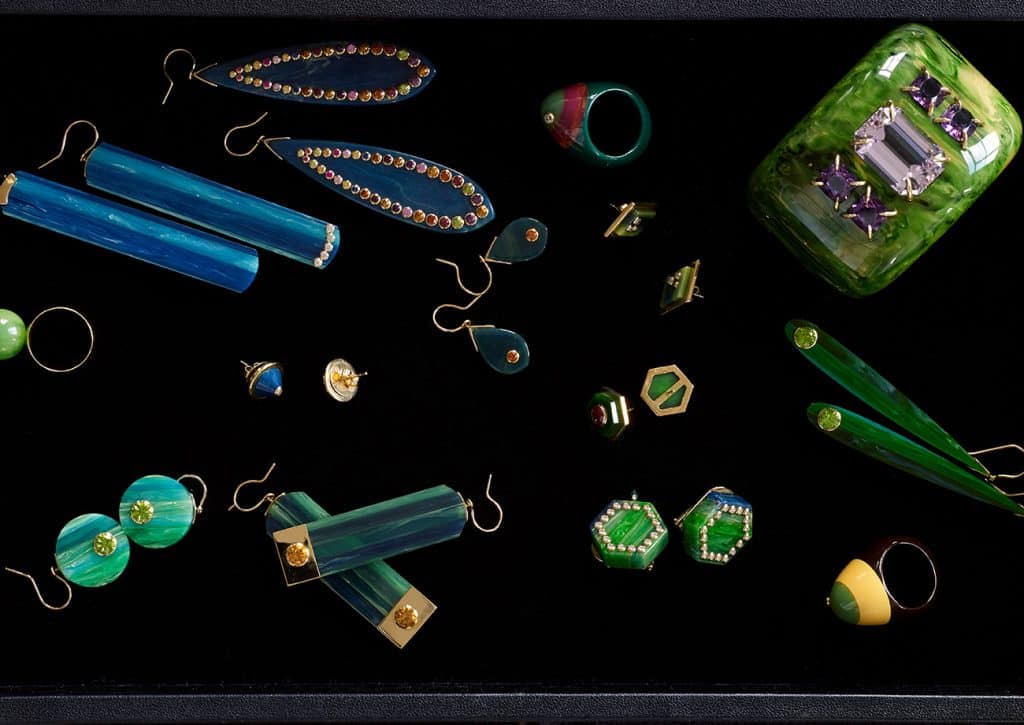 The earrings shown include French wire, post and clip styles. The striped ones are made from laminated strips of vintage Bakelite that have been carved or cut into the desired shapes. “The cuff on the top right features prong-set amethysts and a large central kunzite,” Davis says. “Prong-set pieces take extra-special care and skill to produce because of the strong forces involved in prong setting.” 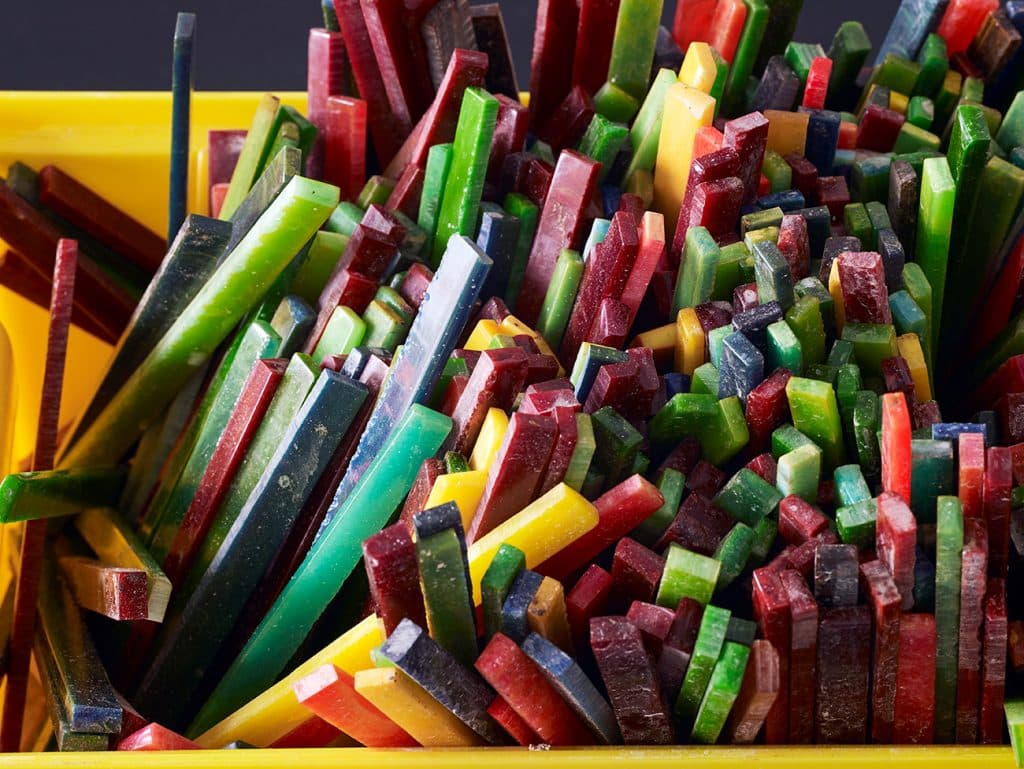 These strips have been excised from large vintage items made of Bakelite, like appliances, jukeboxes, radios and board game pieces. They will be sanded to a uniform thickness, then laminated, and the resulting “slabs” cut and carved into earrings or pendants. 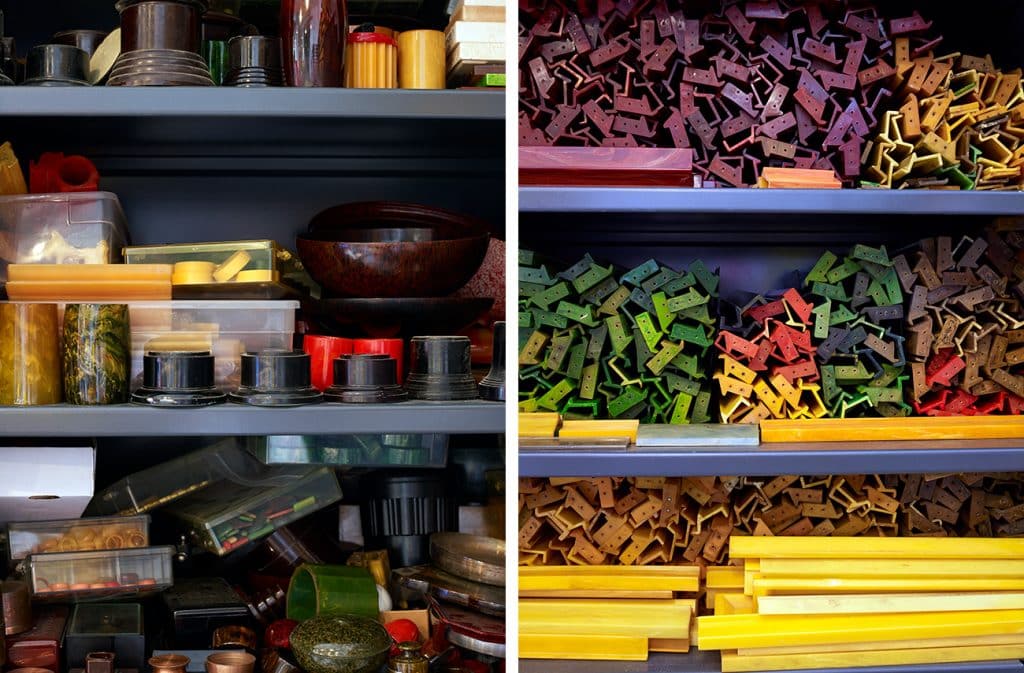 Left: This storage cabinet is stocked with a variety of vintage Bakelite items, like trophy bases, bowls, clock bodies, paperweights, backgammon pieces, napkin rings and trinket boxes. “When the jewels we produce are completed, you will not be able to recognize what the item was originally,” Davis says. Right: Another storage cabinet contains vintage Bakelite mahjong tile racks, which the team also uses as a raw material for jewelry. 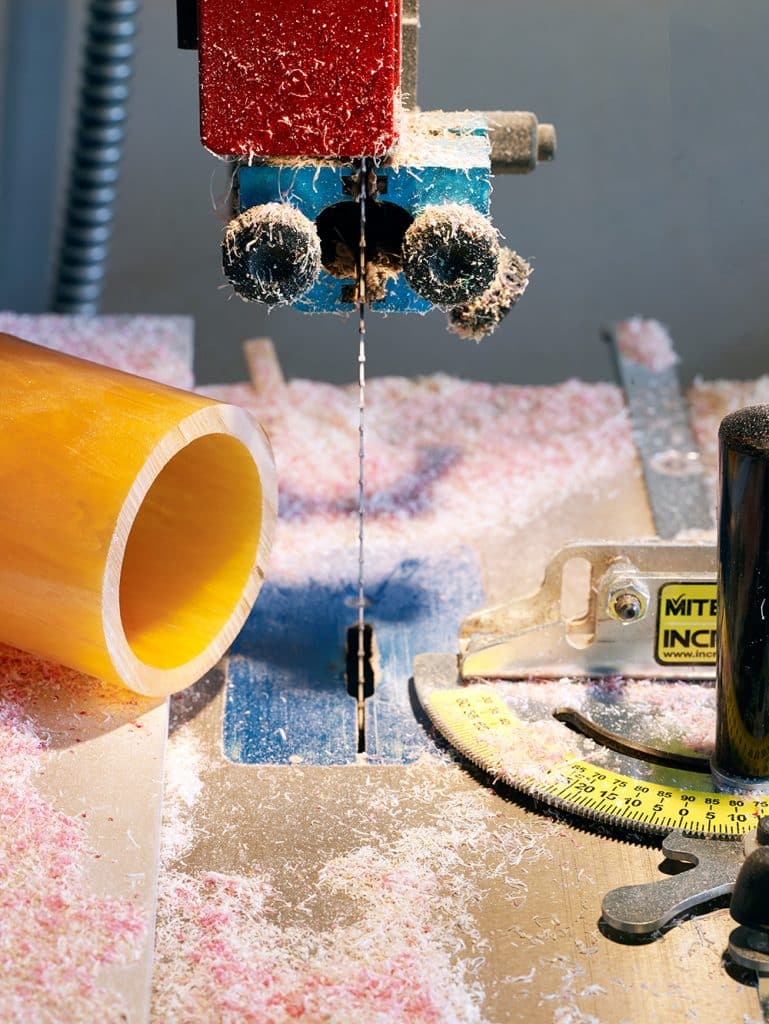 Davis and his team use a bandsaw to rough-cut Bakelite. Here, a long, wide yellow tube is being cut to form bangles. “This is the very beginning of a lengthy process that will transform an old discarded table lamp into a very desirable, unique, one-of-a-kind piece of fine jewelry,” Davis says.

Next, Davis worked briefly for a vintage dealer, where he had more direct contact with clients. “It gave me an appreciation of how emotional a jewelry purchase is to most people,” he says.

In 2001, Davis transformed his jewelry collection from minimalist diamond and platinum jewelry to “hypercrafted” pieces, made from ethically sourced, recycled and sustainable materials, including wood and Bakelite. From the beginning, Davis’s transformed-jewelry collection was received enthusiastically. His first Bakelite styles, polished vintage bangles whose sleek surfaces were set with an array of precious and semiprecious gems, were an instant hit and have since become a staple of his inventory, avidly collected by his clients.

Davis and his team use traditional jeweler’s tools and manufacturing methods to create most of their pieces. The laminated stack of Bakelite pieces in the center of the table will be transformed via carving, filing and sanding until it looks like the tusk pendant below it. The two round pendants on the right, made from pie-shaped slices of Bakelite, will be mounted in yellow gold bezels and set with a large faceted citrine or aquamarine.

Over time, Davis and his small team of craftsmen have figured out how to achieve the shapes they desire by working with a lathe. They also do vibrant marquetry work, piecing together Bakelite of different colors to create geometric pendant earrings, wide bangle bracelets and pyramid-shaped rings. 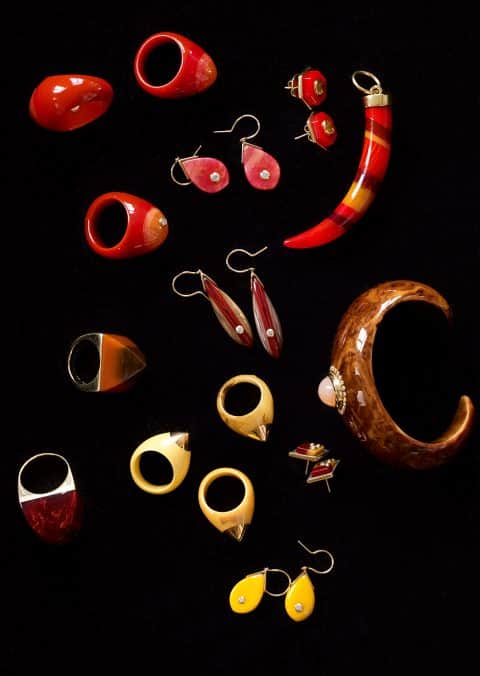 The items in this image come from several different collections. The multicolored  rings are made by hand-carving blocks of vintage Bakelite that were built up by lamination. On the right is a one-of-a-kind, hand-carved, vintage Bakelite cuff with an oval moonstone surrounded by individual bezel-set diamonds.

One of Davis’ full-time employees is charged with keeping the workshop supplied with Bakelite (and other period resins like Catalin and Prystal). She buys items one at a time wherever she can find them, from flea markets and garage sales as well as online. Most pieces are still bought individually from private sellers, though.

Davis didn’t set out to be an eco-warrior, but he’s delighted with the way his business has evolved. His small-scale artisanal manufacturing center has saved countless pieces of Bakelite from the trash heap and transformed them into treasures, each and every one crafted by hand and unique. “There is no way to recycle Bakelite,” says Davis, since it can’t be melted down like most petroleum products. Fortunately, he and his team eagerly repurpose whatever they can get their hands on, creating bijoux whose wearers can justifiably feel both stylish and responsible. “We buy the pieces nobody wants and use every single bit of them in new jewels,” Davis says. “Nothing goes to waste.”

The designer shares his thoughts on some of his favorite pieces. 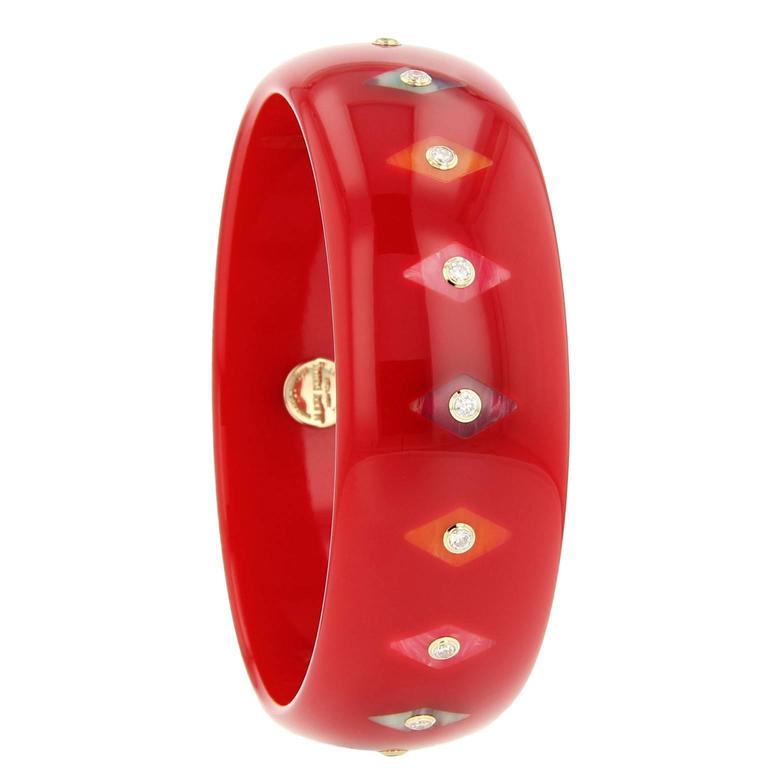 “This is a classic Mark Davis Bakelite bangle in a vivid solid red with colored harlequin inlay punctuated by brilliant diamonds. It’s fine, fun and elegant all at the same time.” 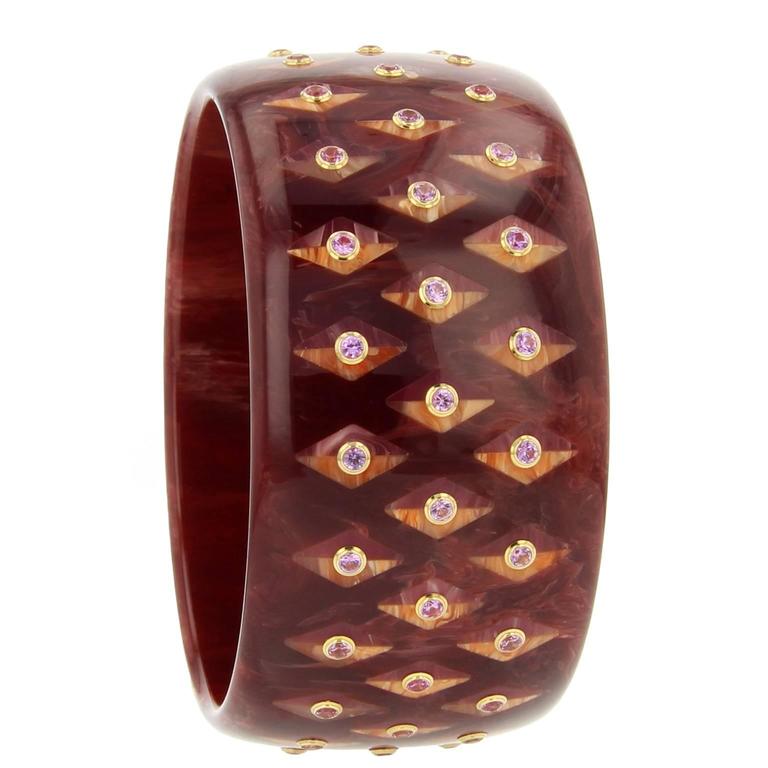 “I love the rich burgundy of this bangle, enhanced with orange and deep pinky-purple inlay. The whole piece is brought to life with lively pink sapphires.” 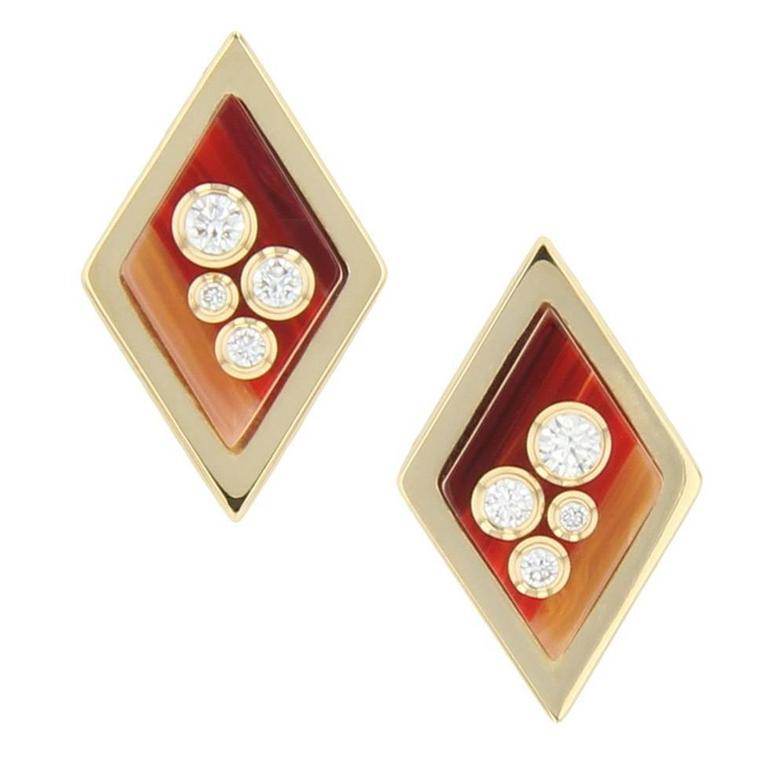 “The angular lozenge shape of these earrings is both elegant and edgy. The diamonds add a sparkling femininity that softens the linear outline.” 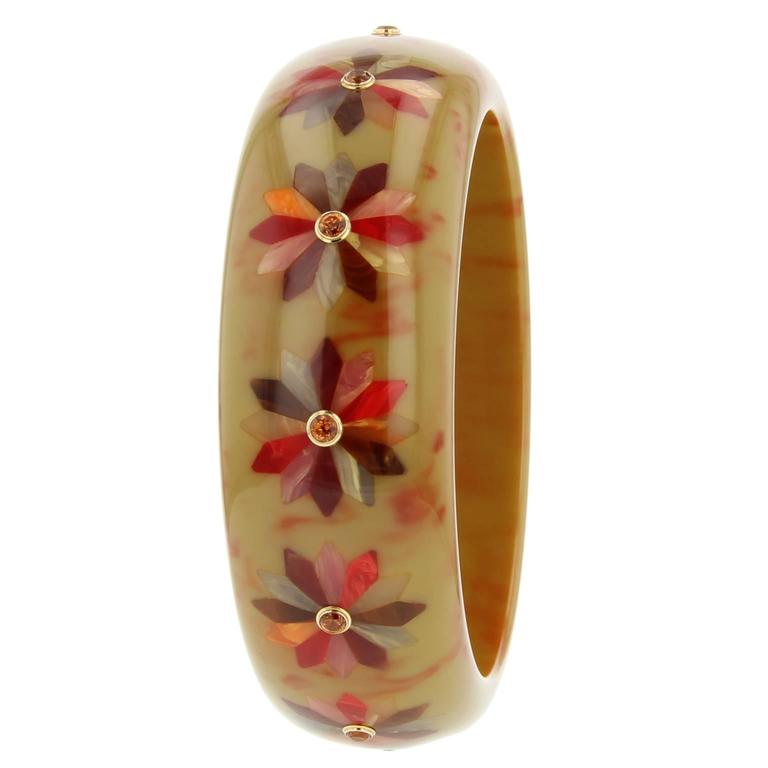 “The base color and marbling of this bangle are something we rarely see. The inlay sections, each containing twelve pieces in various colors, add even more interest and depth. This piece is the epitome of chic and looks amazing paired with yellow gold bangles.” 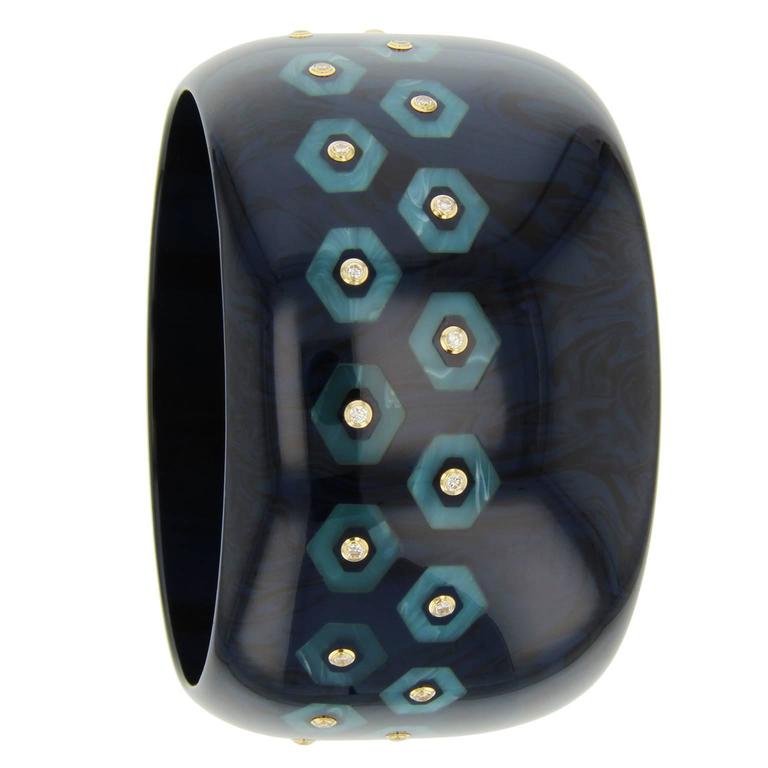 “This bold bangle is strong enough to stand on its own but is neutral enough to be worn with a mate. It is a substantial piece that is perfect for day and night.” 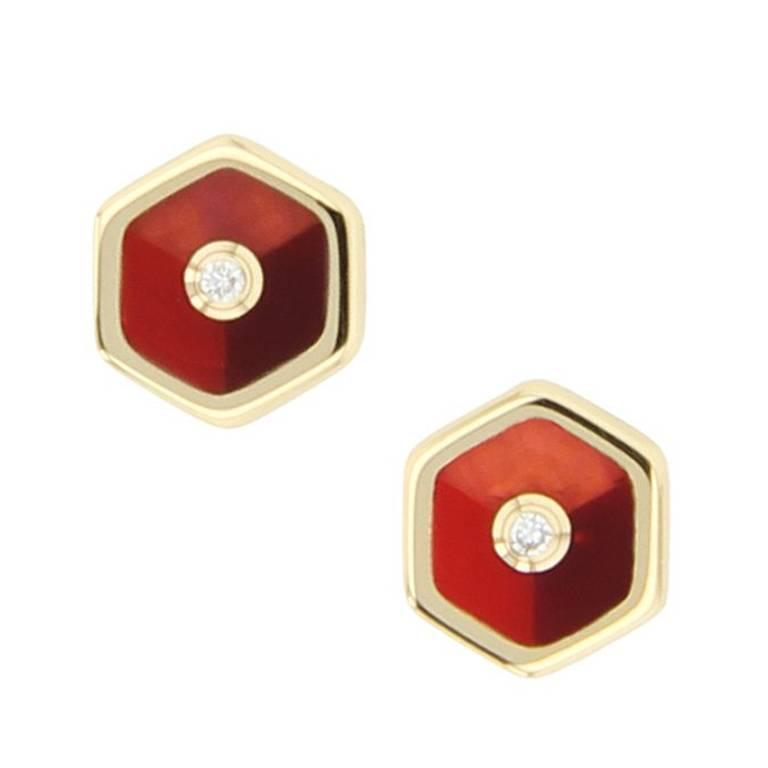 “These studs are made with three shades of Bakelite — red, pink and burgundy — centered by a bezel-set diamond. They are simple but interesting everyday studs.” 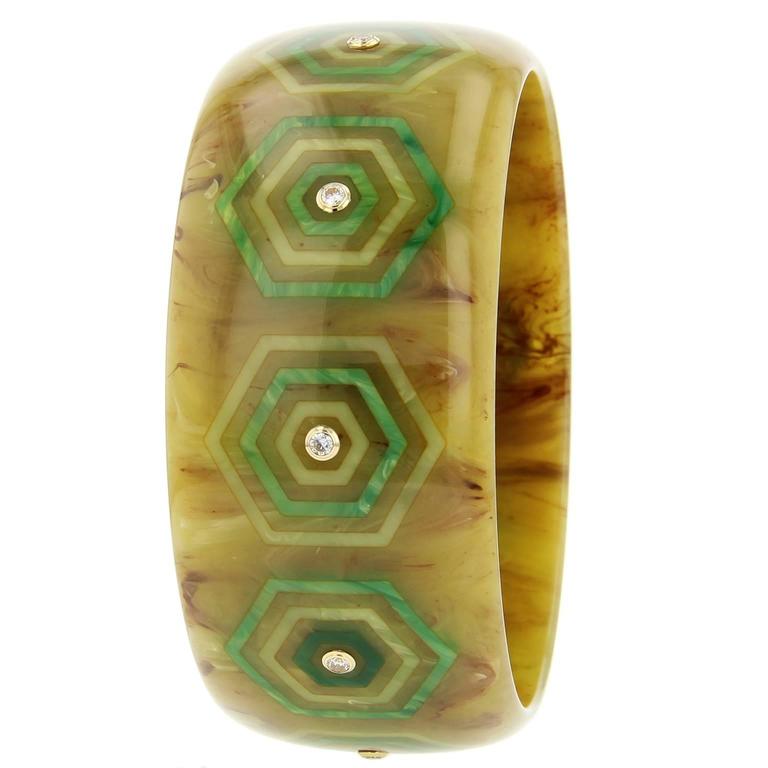 “The precision of the nested, hexagonal inlay against the random marbling of the bangle creates a sophisticated tension that is punctuated by the brilliant diamonds.” 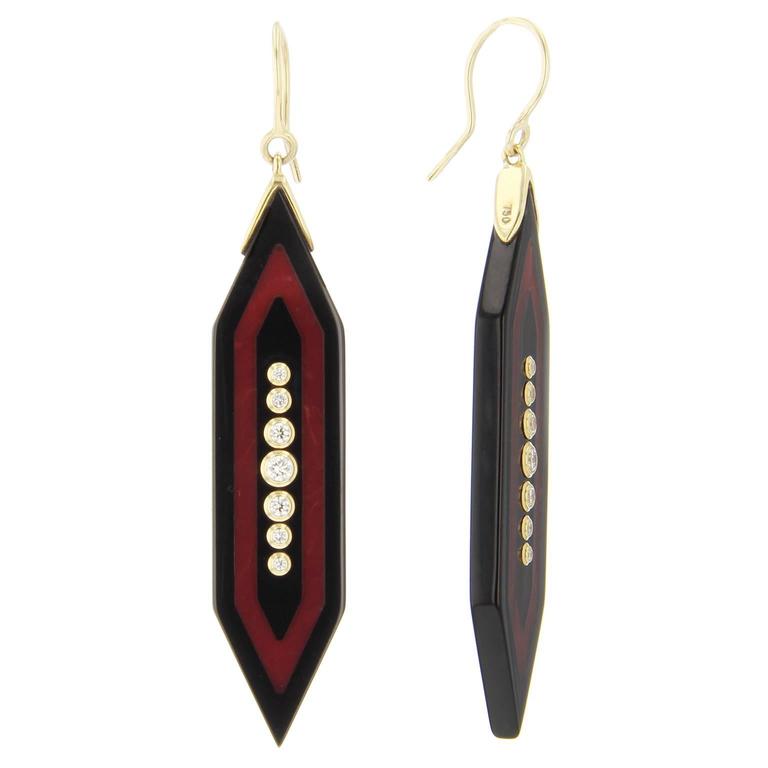 “These earrings are practically weightless but heavy on style and impact.” 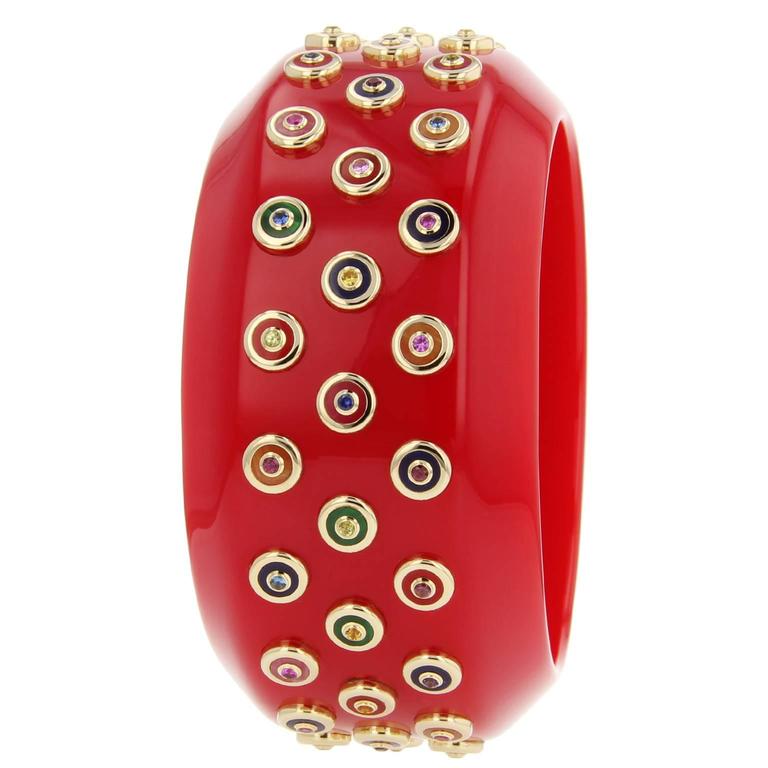 “The raised gold bezels containing various colored disks of bakelite with assorted gemstones give this bangle another dimension and unexpected texture. It’s a piece that offers both visual and tactile interest.” 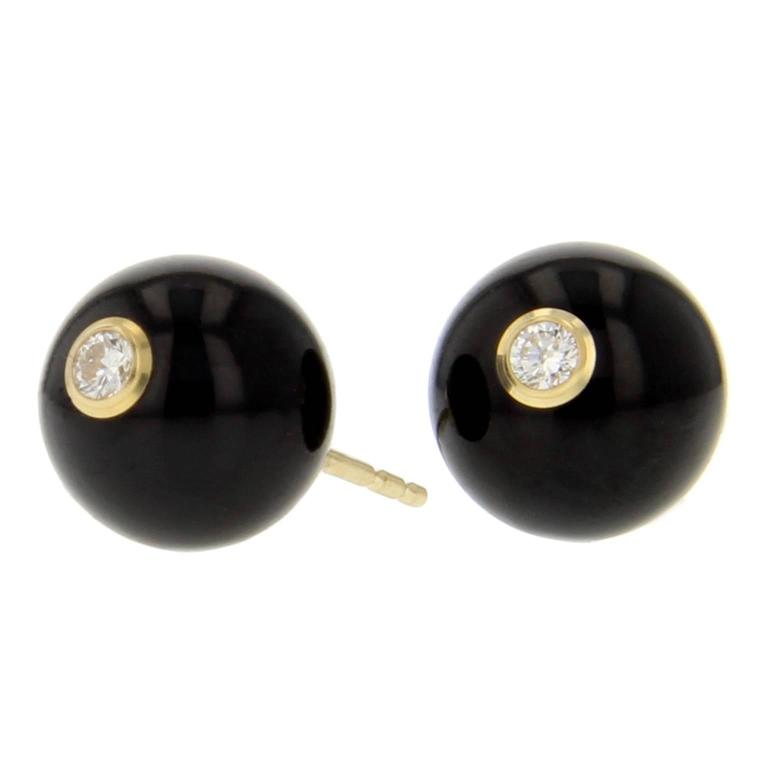 “These are the postmodern version of pearl studs — basic but not at all boring.”