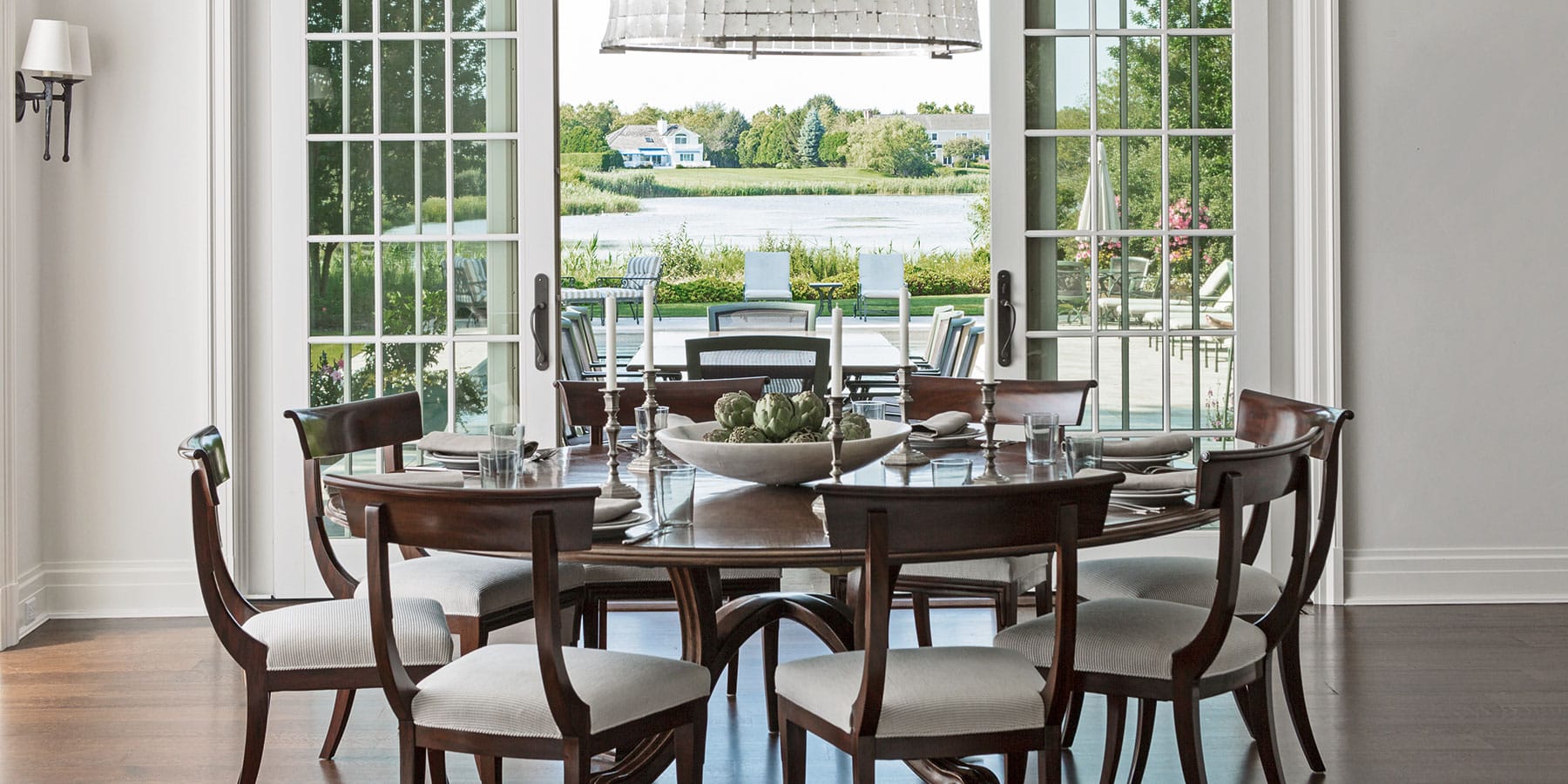 Whether composing decor or appetizers, the New York-based designer is lauded for his ability to set the scene. 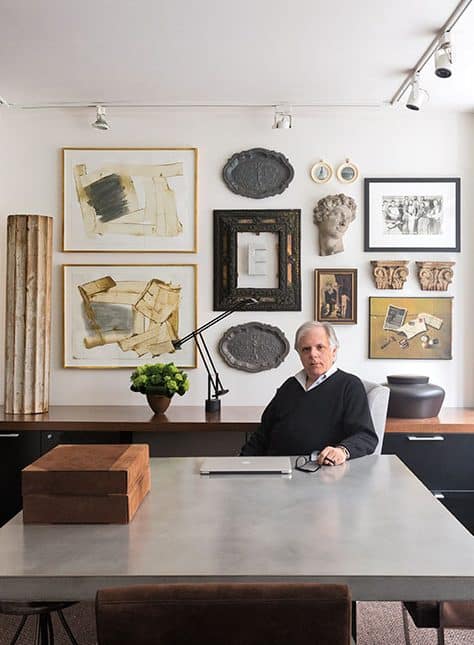 Mark Epstein, seated here in his Upper East Side office, often serves clients lunch at this table. Top: In this seaside Hamptons home, a capiz-shell chandelier hangs over the traditional walnut table, which is surrounded by klismos chairs upholstered in indoor-outdoor fabric. All photos by George Ross

Cool, creamy onion dip is delicious, but when was the last time you whipped up a batch? Interior designer Mark Epstein’s new monograph, Mark Epstein Designs (Pointed Leaf Press), devotes a full page to his gourmet version (seen heaped into a weathered wooden compote) and helpfully provides the recipe too. (His secret ingredients include anchovies and Greek yogurt, and he serves it with William Poll’s herbed potato thins.) Epstein is a New Yorker through and through, so the book primarily features contemporary Manhattan apartments and timeless Long Island houses with broad water views. But it’s also punctuated by recipes and still-lifes of food cooked and styled by the designer, a noted host and bon vivant. A story about a blended family’s shingle-style getaway in the Hamptons has a picture of a marble-topped Eero Saarinen cocktail table in the library topped with a pile of savory mini madeleines nested in a prim 19th-century Wedgwood basket. “Pair them with rosé,” the designer suggests. Yum! 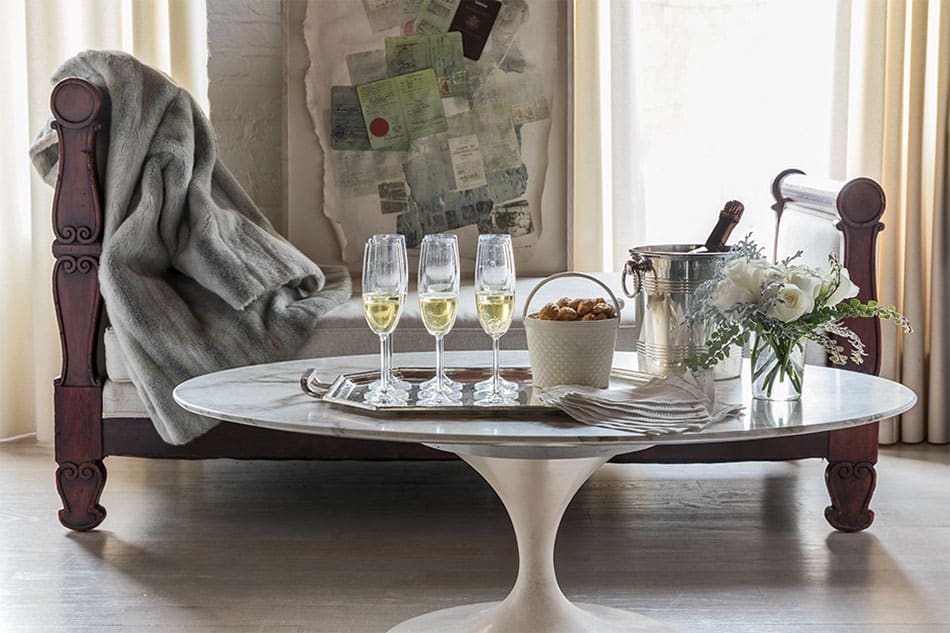 In the library of a Hamptons home, an Eero Saarinen marble coffee table holds the makings of a Champagne toast, along with a basket of savory mini madeleines, the recipe for which Epstein includes in his book. A collage by Linda Cunningham hangs behind the Regency daybed. 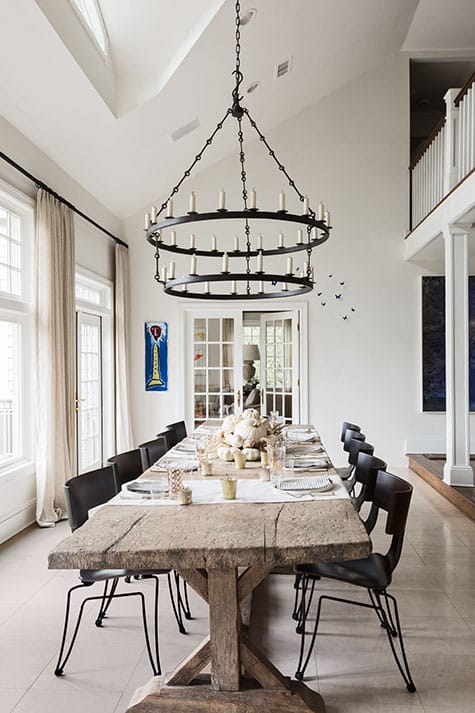 In this Long Island dining room, the 12-foot-long 18th-century Italian refectory table was sourced from a shop in Los Angeles. Two other people wanted to buy it, so Epstein called his client and told her she had half an hour to decide. “It was the most expensive piece of furniture she had ever bought, but when it arrived, she was thrilled,” Epstein writes.

Long a personable fixture on the design scene — not to mention a gracious host — Epstein is easy to fall in love with. He seems mild-mannered at first blush, but his offhand charm is a superpower. He used X-ray vision to peer right through a maze of walls in a 3,000-square-foot, four-bedroom Park Avenue apartment, then bulldozed it into a flowing one-bedroom, downtown-style loft for empty nesters. He started by exposing a stripped-concrete structural column, then added a laser-cut-steel Tom Wesselman wall drawing, an orange Saarinen Womb chair and a pair of Warren Platner stools.

The hand-tufted silk rug he designed for the prewar’s living room is boldly patterned with an artistic interpretation of weathered graffiti. It was designed by Epstein, who attended art classes at Pratt Institute as a teen and returned for college. His mentor there was none other than designer Joe D’ Urso, high priest of high tech.

Epstein still loves — and uses — high-tech elements, but he says he never thought “everything has to be black leather cushions.” Indeed, he will cover a wall with a trio of flat screens or use ultramodern Italian lighting in a traditional environment complete with slipcovers secured using shell buttons. Then there’s the 12,000-square-foot shingle-style beach house by Robert A.M. Stern Architects he furnished for a young couple with three school-age kids on Long Island. The wife had enjoyed working with Epstein before and trusted him to kiss the rooms of this new house with highlights in her signature purple — a strong-willed and sometimes misunderstood hue that, when mishandled, can quickly overwhelm. Among the touches in her favored color: Epstein framed a fireplace with a lilac-veined marble surround and scattered dozens of throw pillows in soft shades of violet and indigo. “Mark isn’t afraid of pretty,” notes Suzanne Slesin, the publisher and editorial director of Pointed Leaf Press. 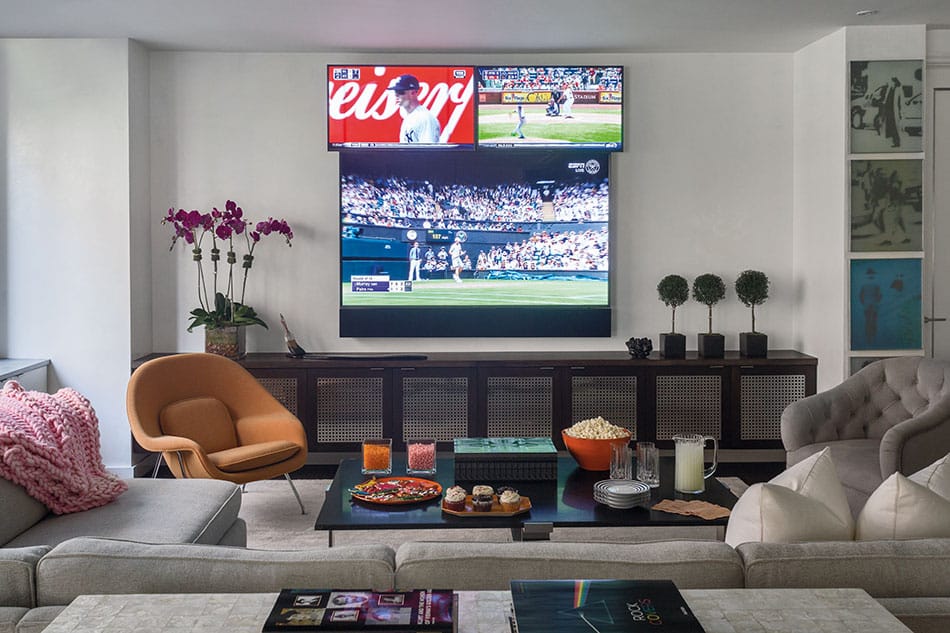 A couple with five children and five grandchildren tasked Epstein with creating a “downtown loft in a Park Avenue apartment.” The three televisions ensure that the sports-loving family won’t miss any action. An Eero Saarinen Womb chair sits next to a media cabinet Epstein designed with perforated-steel doors. 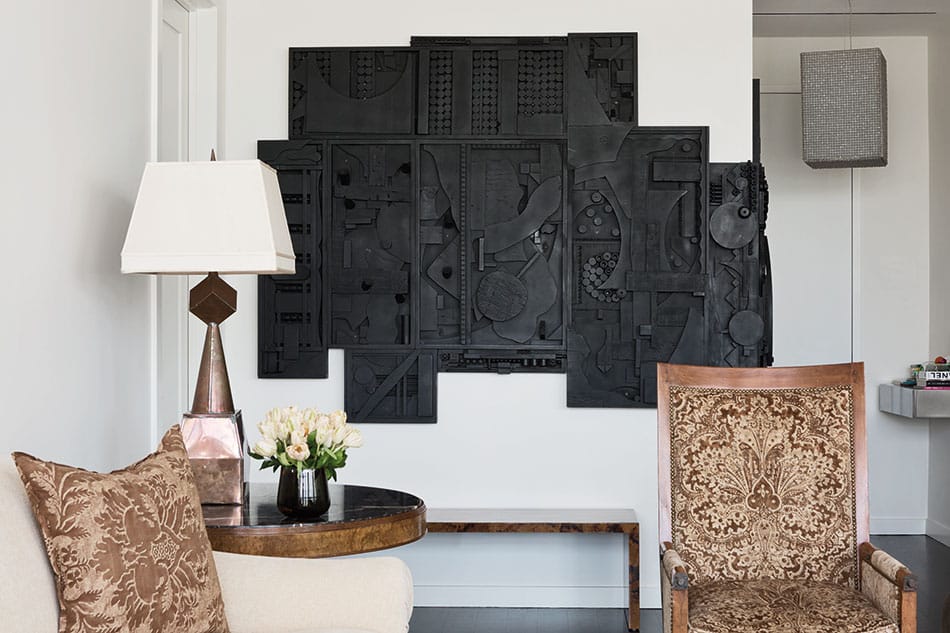 In the living room of a Tribeca loft belonging to longtime clients, which has views of the Hudson River, a 1970s Louise Nevelson wall sculpture hangs near the entry. 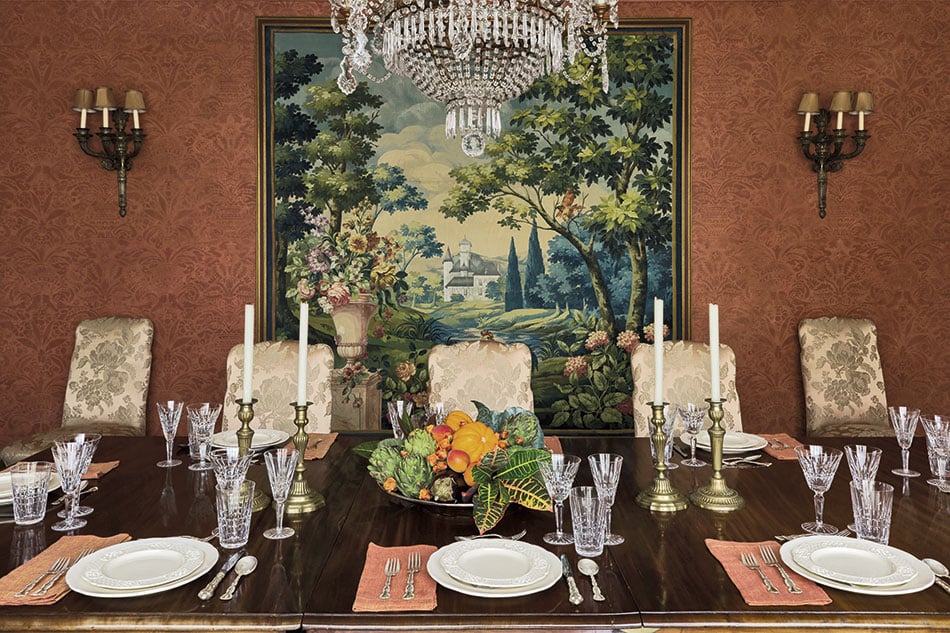 The design of this Upper East Side apartment was inspired by the menu of a Belgian restaurant that the homeowners had visited. The dining room features an 18th-century Irish triple-pedestal mahogany table that seats 18. Epstein found the tapestry at the Marché aux Puces de Saint-Ouen in Paris. 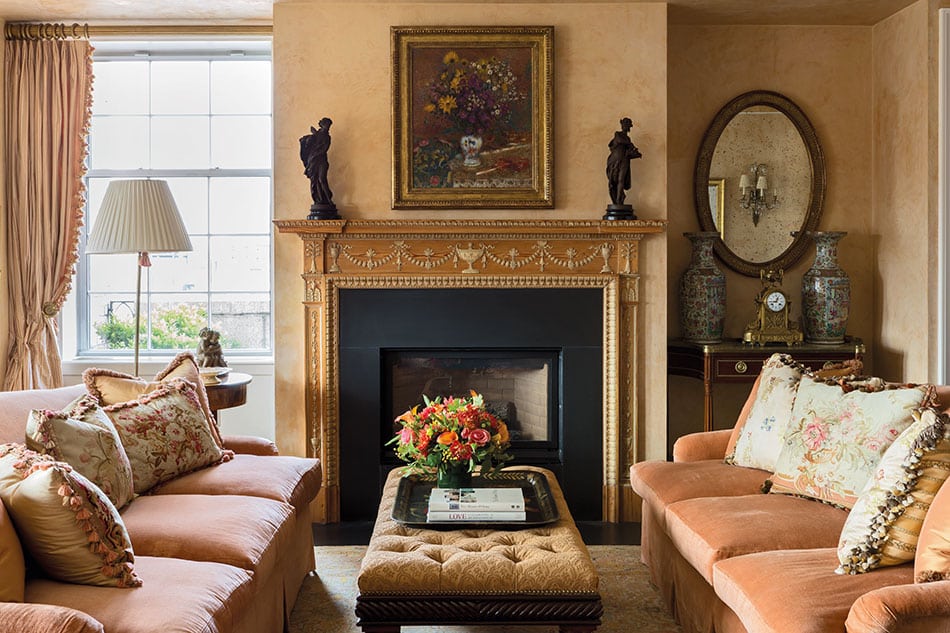 Epstein’s biggest challenge in this home was moving the fireplace from one wall to another. There, he made it a focal point by surrounding it with an 18th-century pine mantel. The sofas are upholstered in plush mohair. 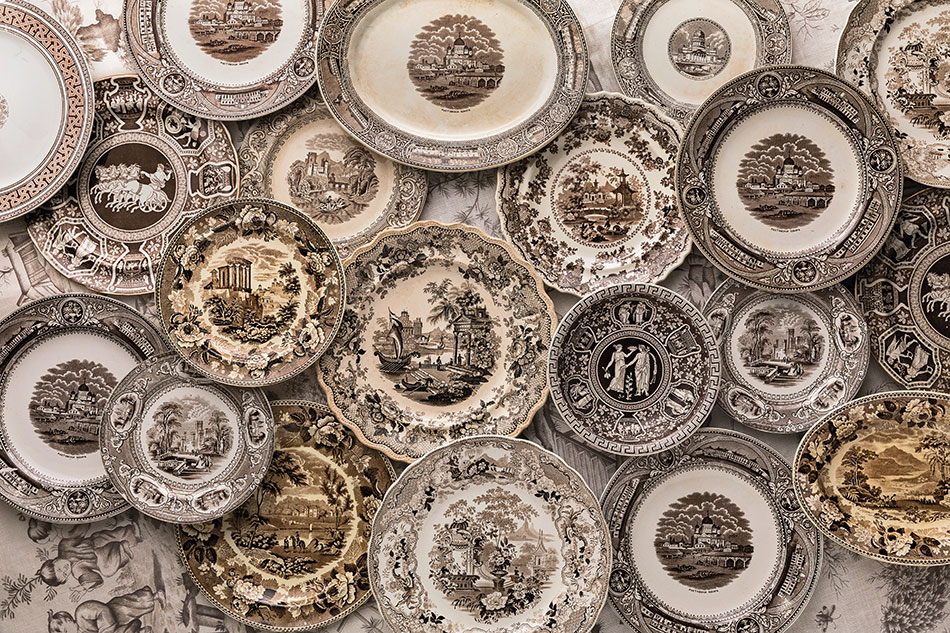 Epstein, who says he is “smitten with tableware,” writes, “I am especially enamored by Transferware, the earthenware that was made in England in the 18th and 19th centuries by Adams and Wedgwood and is still made today. Its toile-like patterns look so beautiful paired with white china.” 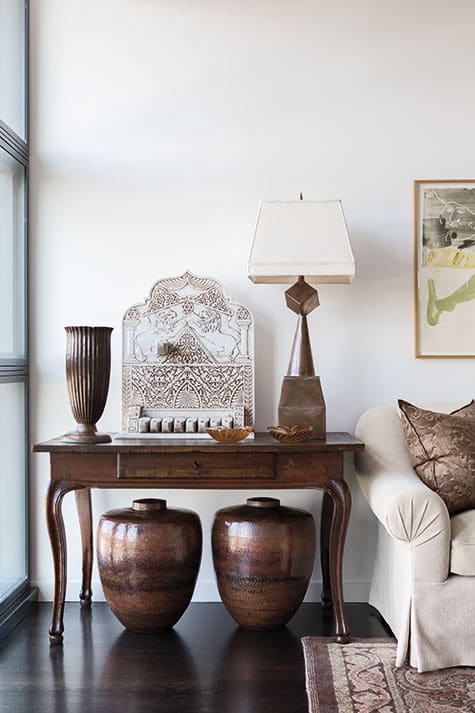 In this living room of a Tribeca loft, an antique side table holds a Moroccan carved-stone menorah and a lamp of Epstein’s own design, made from a copper finial and a fluted copper vase. Beneath the table are a pair of hammered-copper vessels.

Slesin has known Epstein for years — she published his work two decades ago while design director at House & Garden — but they only recently reconnected as friends. The day we speak by telephone, she is in a departures lounge at Charles de Gaulle, where she is about to board a flight to meet Epstein for a six-day getaway at a stone beach house on the Greek island of Serifos.

Slesin calls Epstein flexible and imaginative. “Clients can be persnickety, and decorating can be difficult, but Mark does for his clients what they could never do for themselves,” she explains. She put the lilac fireplace on the cover of Mark Epstein Designs, which the designer wrote with legendary editor Arlene Hirst. It was also Slesin’s idea to include recipes in the book, as a way to showcase his wide range of talents. “Mark can coordinate a party, set an elegant table for clients and get a kick out of it because he really enjoys doing things for people,” she says.

And those clients come back for seconds, thirds and more. Epstein’s eponymous studio, which he opened in 1977, has blasted the concept of repeat business into outer space. One of his devotees has commissioned seven residences so far, from East Hampton, New York, to Cabo San Lucas, Mexico. There’s photographic evidence, but a reporter will never learn her name. “Mark is very protective of the people he works for, and extremely discreet,” says Benoist Drut, owner of Maison Gerard, a favorite Epstein shopping spot. “Most of the time you only hear from your clients when there is a problem, so it’s rare to get a sweet text like Mark’s little thank-you notes.” Drut recalls receiving one after a particularly hard week and starting to cry. “There’s something very beautiful about Mark,” he says. “And he pays on time.” 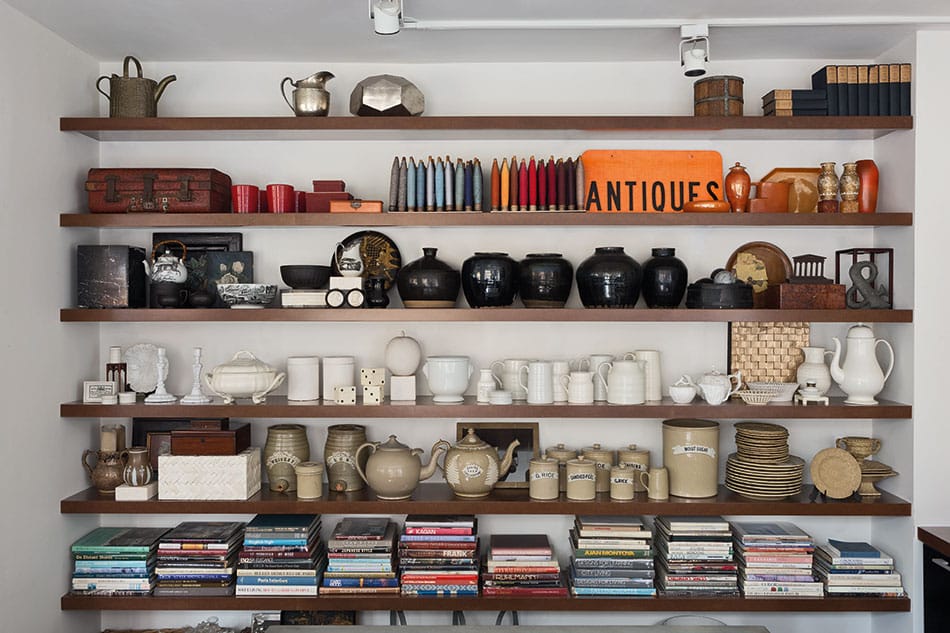 Fellow designers often drop into Epstein’s Upper East Side office to shop from his rotating collection of objects. The shelves are Masonite, which he “realized could look rich when it was lacquered,” Epstein writes in his book. “I loved using it in a way that wasn’t traditional.” 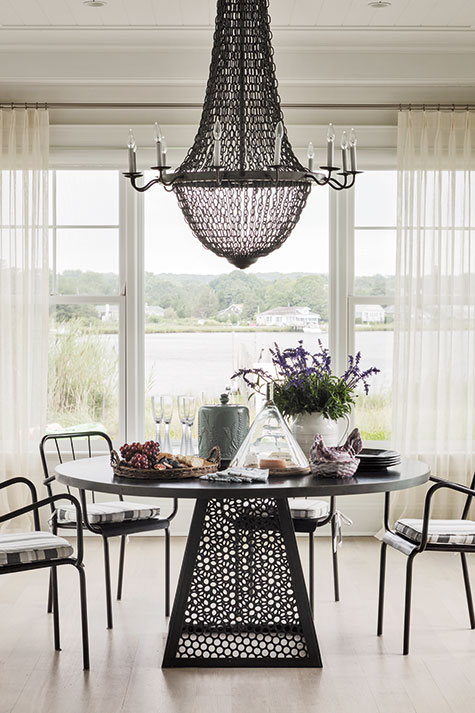 Epstein designed this Sag Harbor, New York, country home for longtime clients who had sold their previous home furnished and so needed to start fresh. In the dining area, a chandelier with metal chains hangs over a table with a perforated-steel base and a zinc top, which is surrounded by French metal garden chairs.

Epstein works out of an Upper East Side office with track lighting and large windows looking out over the neighborhood. Vintage street signs and antique clocks hang on the wall, and a collection of creamware, old wooden boxes and architectural miniatures is displayed on the elegant dark shelves. The latter are made of Masonite that he has stained and lacquered to look surprisingly luxe. They’re among the many examples of his nonstop adventures in high and low. For clients with young children, he uses bleach-cleanable solution-dyed acrylic upholstery, and he extols the practicality of Ultrasuede. “If it was good enough for Halston . . .” he says. In a house with two spaces for enjoying meals, the breakfast room’s strappy leather chairs were $4,000 each, while the more formal 12-foot-long Italian refectory table in the dining area is paired with 18 affordable molded-beechwood Anziano klismos chairs by John Hutton for Donghia. Epstein points out that, for smaller dinners, the extra Hutton chairs can be stacked offstage. He has elevated practicality to an art.

The book shows several pictures of his Third Avenue design studio, including one in which a custom wing chair is in a gray cashmere that, he writes, “happens to go with my hair.” Throughout his work, color and pattern are both essential and deeply personal. “Soft, muted colors can be just as neutral as beige,” he notes. He collects monochromatic transferware plates tattooed with antique motifs he likens to toile. But in a bathroom for a woman who loves layered patterns, he painted the floors with a bold zigzag taken from one of his Missoni terry-cloth bathrobes. With four decades of experience, he knows what works and occasionally goes out on a limb to achieve it. He recalls telling one client while they were shopping that he would stay sitting “in this chair until you agree to buy it.” Charmed, she did. “I always have a smile for clients, and we have a good time,” he says. “I want them to be in love with their homes.” 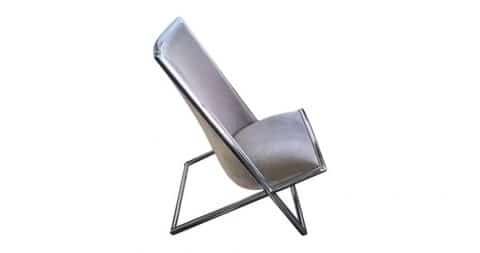 “The sculptural lines of Ward Bennett’s scissor chair, combined with its incredible comfort and airiness, make it a perfect pull-up chair for any room. It is beautiful from all sides.” 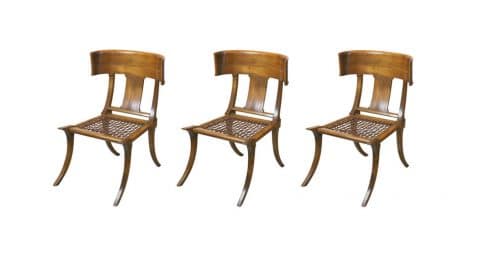 “The saber leg is a sexy and sophisticated design that we love to use to blend modern and classical interiors.” 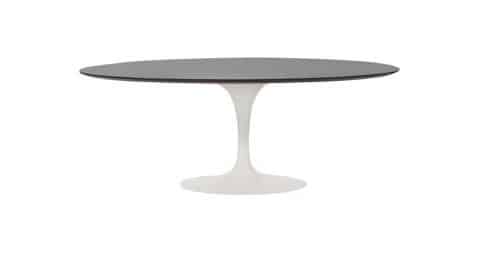 “Since its creation in the mid-twentieth century, the streamlined Saarinen table has been a design classic. The oval shape provides a wonderful gathering spot for dining and conversation.” 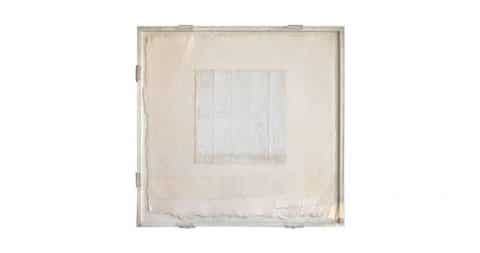 “I’ve collected the work of Robert Courtright for years. These handmade-paper collages have an architectural rigidity with a romantic aura.” 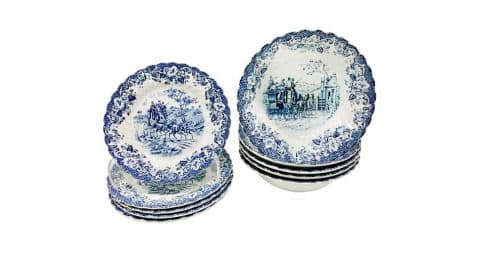 “I love mixing various patterns of transferware as an accent with other china, especially white. It’s important to find a blending of the soft tones of vintage pieces, which tend to have a soft, creamy background.” 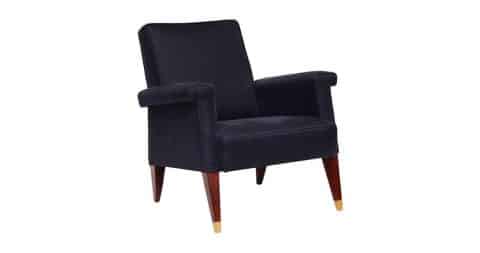 “Jules Leleu always seems to get it right. The height of the arm, the depth of the seat, the brass sabots on the front legs and the squared-off arm detail all provide handsome seating perfection.” 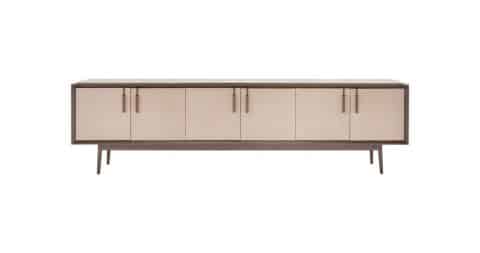 “The marble top gives this sideboard credenza great practicality. The tapered legs provide a lightness that’s a beautiful mix with a contemporary interior.” 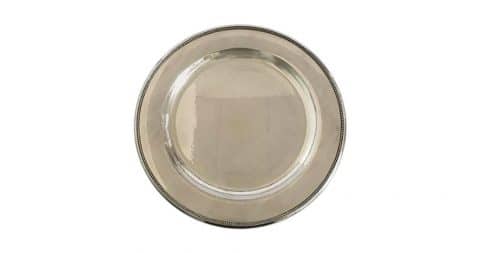 “The beaded border is the perfect detail to edge this classic Jensen silver tray. It’s an ideal shape for serving drinks or hors d’oeuvres, and it becomes a family heirloom forever.” 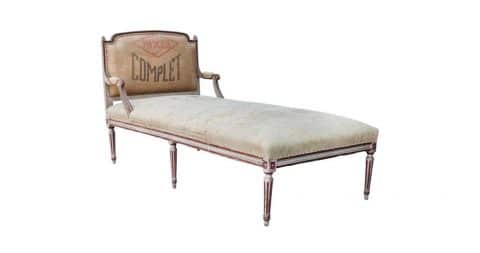 “A vintage burlap sack covers the back of this French chaise longue, making it a beautiful marriage of recycling and contemporary graphic modernity. It would be a fantastic piece in a bedroom.”