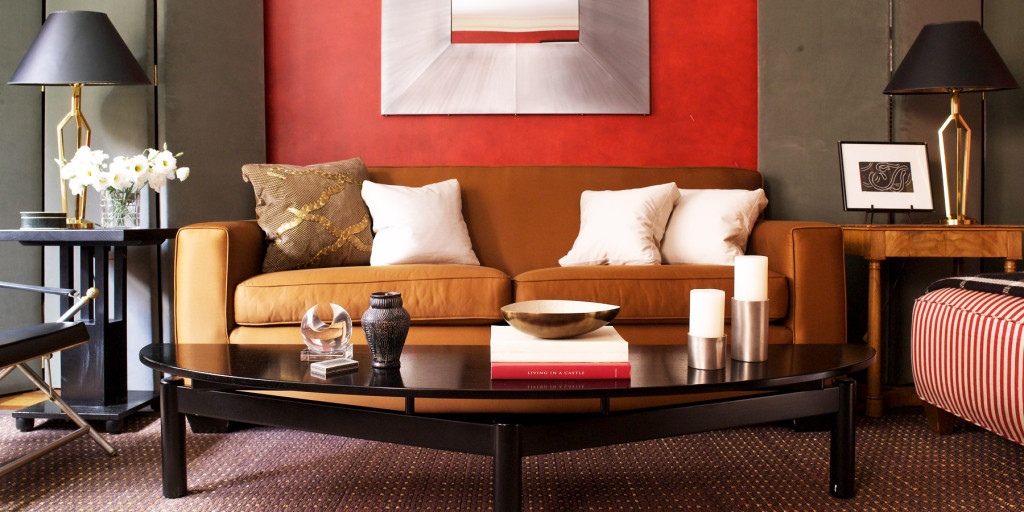 No diva he, the New York–based designer creates rooms that are the appealing essence of understated elegance. 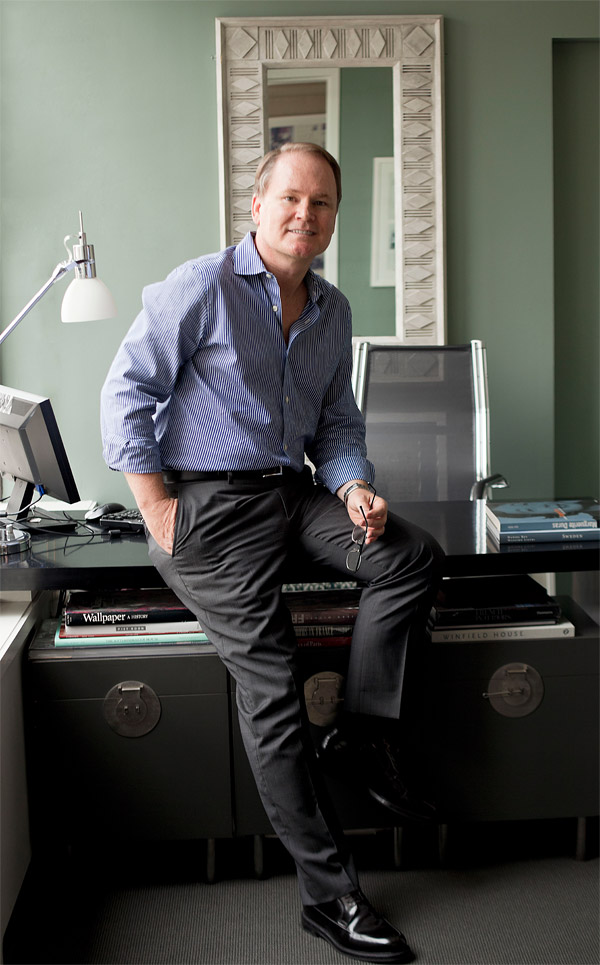 September 1, 2010Designer Matthew Patrick Smyth in his New York office. Top: In the living room of Smyth’s Manhattan apartment are lamps of his own design, a wool sofa by Rogers & Goffigon and a 1980s Italian low table. “I love to travel and my apartment in New York is filled with treasures I’ve collected over the years” he says.

As a boy growing up in the small town of Florida, in Upstate New York, Matthew Patrick Smyth was quite oblivious about interior design. “It simply didn’t figure in my world.” He says. “I didn’t know anyone who hired an interior designer.” Fixing up the house was just “something that your mother did.”

Today, however, Smyth occupies a comfortable spot at the pinnacle of the profession. “Matthew is a rare talent,” says his friend Wendy Goodman, the design director of New York magazine. “He is also a gentleman who is wise, smart and the best company.” Smyth’s interiors are cool and elegant but not austere. His signature look is classic and uncluttered tempered by a strong contemporary sensibility. And his attention to scale, balance and detail earned him a spot on this year’s list of Elle Decor’s Top 25 Designers.

Smyth is also, as Goodman suggests, a wonderful fellow and everyone’s favorite dinner guest: he’s a charming, quick-witted conversationalist with delightful manners and not a shred of ego. An enthusiast for all things, Smyth has no time for drama or pretension. He’s refreshingly down-to-earth in a world overpopulated by divas and doyennes. “And this natural, quiet elegance is reflected in his design projects,” Goodman asserts.

The oldest of five children and the grandson of Irish immigrants, Smyth first pursued a business degree (his family was all-approving) but says he soon realized that “was not something I wanted to do.” A chance invitation to a lunch where a fellow guest “talked about design and made me realize it could be a career” provided the impetus needed to switch gears and apply to the Fashion Institute of Technology, or FIT. (His family was horrified!)

He pulled together what he says must have been the thinnest portfolio ever presented by a would-be FIT student but was admitted nonetheless. Following graduation, he held a few jobs before being hired by David Easton. “Going to work for David,” he says, “was the best decision I ever made. It was exactly like going to graduate school. I learned so much — should a client ever need custom embroidered vestments for a private chapel, I know where to go! David’s style and approach still inspire me today. My second best decision came six years later, when I knew it was time to leave and go out on my own.” 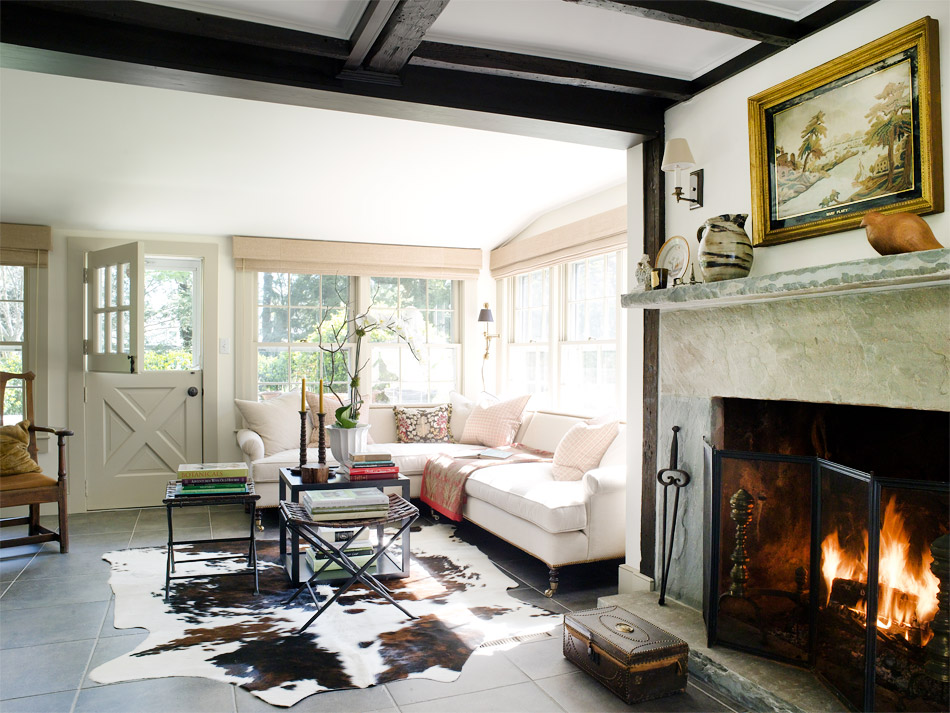 Many of the furnishings in Smyth’s 1790s colonial house in Sharon, Connecticut, are “leftovers” from various designer showrooms that he has decorated. 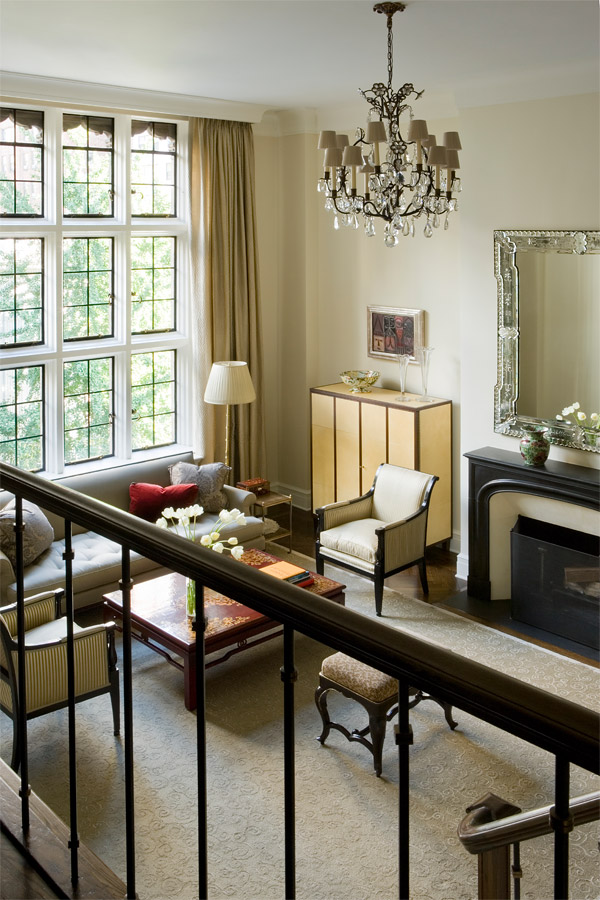 That was 1987. Today, Smyth works out of a small, cozy office on East 57th Street with six employees, which is exactly the way he wants it. “I’m not looking to bring Wall Street into my business,” he explains. “That’s just not what I am about.” His organization may be lean, but he’s on a roll. Recent and upcoming projects include houses in Palm Beach, Salisbury, Connecticut, Aspen and Nantucket, as well as apartments in New York, London and Paris. He’s done two carpet collections for Patterson, Flynn & Martin and a fabric and wallpaper collection for Schumacher. He has also participated in four Kips Bay Decorator Show Houses, including a collaboration last year with Gloria Vanderbilt to re-create a beloved childhood bedroom created by her aunt, Gertrude Vanderbilt Whitney. A book, to be published next spring by Monacelli, is in the works.

Smyth thinks of his work as analogous to a set designer who gets handed a script and takes it from there. After meeting with the client and getting his frame of reference, he comes up with a concept and a floor plan. “While clients can’t always tell you what they want, they can certainly tell you what they don’t want, and that’s extremely helpful,” he says. “I sketch as much as possible — it helps me find the impact of the room. I try to avoid trends, gimmicks and tricky detailing. I don’t like a room that is too studied or looks uptight.”

His overall approach is traditional: “That’s the world I come from, but over the years I’ve loosened up a lot and now like nothing better than mixing 20th-century art and furniture with antiques,” he says. “I’m much freer now, although I often don’t realize this until I compare my new work with the old.” The experience of frequent travel — recent destinations include St. Petersburg, Egypt, Morocco, Vietnam and Cambodia — and also spending time in a small apartment he shares in Paris with his longtime partner, Jean Vallier, factors into his work through his choice of objects, furniture, fabrics and artwork giving his rooms unusual flair and sophistication. 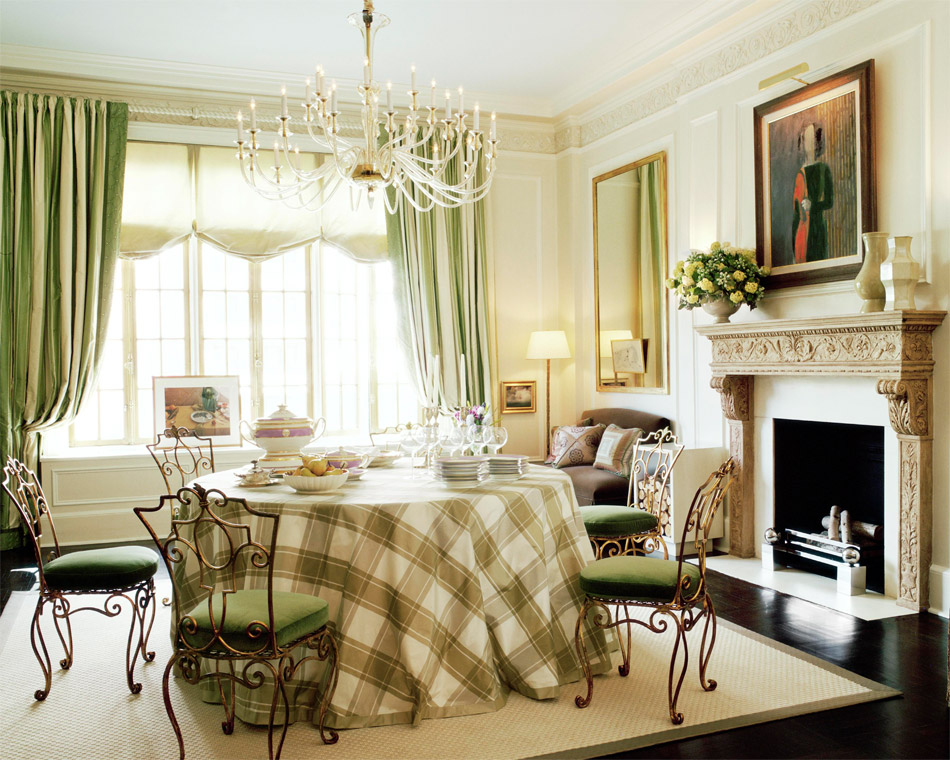 In a dining room by Smyth at the Kips Bay Show House are a 1950s Murano chandelier and fabrics by Hinson. 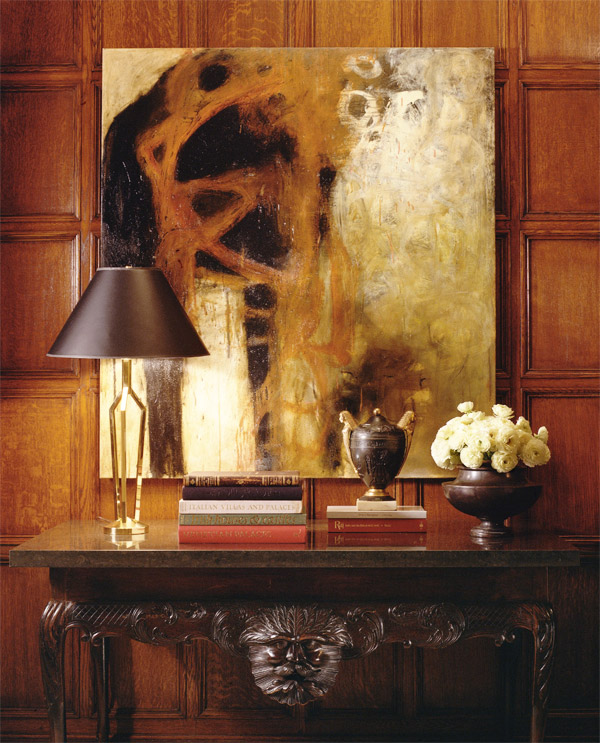 A view of a Kips Bay bedroom, where s brass lamp, designed by Smyth, sits on an 18th-century Irish console from Kentshire. The oil painting is by Melinda Stickney-Gibson.

Weekends usually find him in Sharon, Connecticut, where Smyth bought a 1790s colonial house that needed a great deal of work. “It’s tricky working for myself,” he admits. “I’m probably fussier and more impatient than any of my clients. With this project, I had to focus closely on what was appropriate for the house and then everything fell into place. I wanted a very different feel from my New York apartment, and my task was essentially to reorganize the space and introduce modern comfort without sacrificing any of the house’s historical integrity.”

The place is filled with books and interesting objects collected over the years: a covered Burle butter dish found in London’s Portobello Road, a set of historical prints of the various arrondissements of Paris, found at the Marché aux Puces in Paris, and dishes acquired at the Rhinebeck Antiques Fair. Many of the furnishings are “leftovers” from the various designer show houses Smyth contributed to.

Smyth’s house is close to the town of Salisbury, where he has just finished a top-to-bottom restoration of the historic White Hart Inn, reducing 30 bedrooms to 15 luxurious suites with huge bathrooms and redesigning all of the public spaces. Every room has been individually decorated, and he shopped locally as much as possible.

But whether he’s working on a rustic country inn or a luxurious New York City apartment, Smyth’s “rooms are always inviting and look as if they have been years in the making through a life well lived,” Goodman concludes. “Comfort is key, and he knows that. The fashion designer Geoffrey Beene often used the word ‘propriety’ to describe designs that felt absolutely correct. Matthew has the sensitivity that brings this kind of flair and finesse to life.”