Rings of the Lords 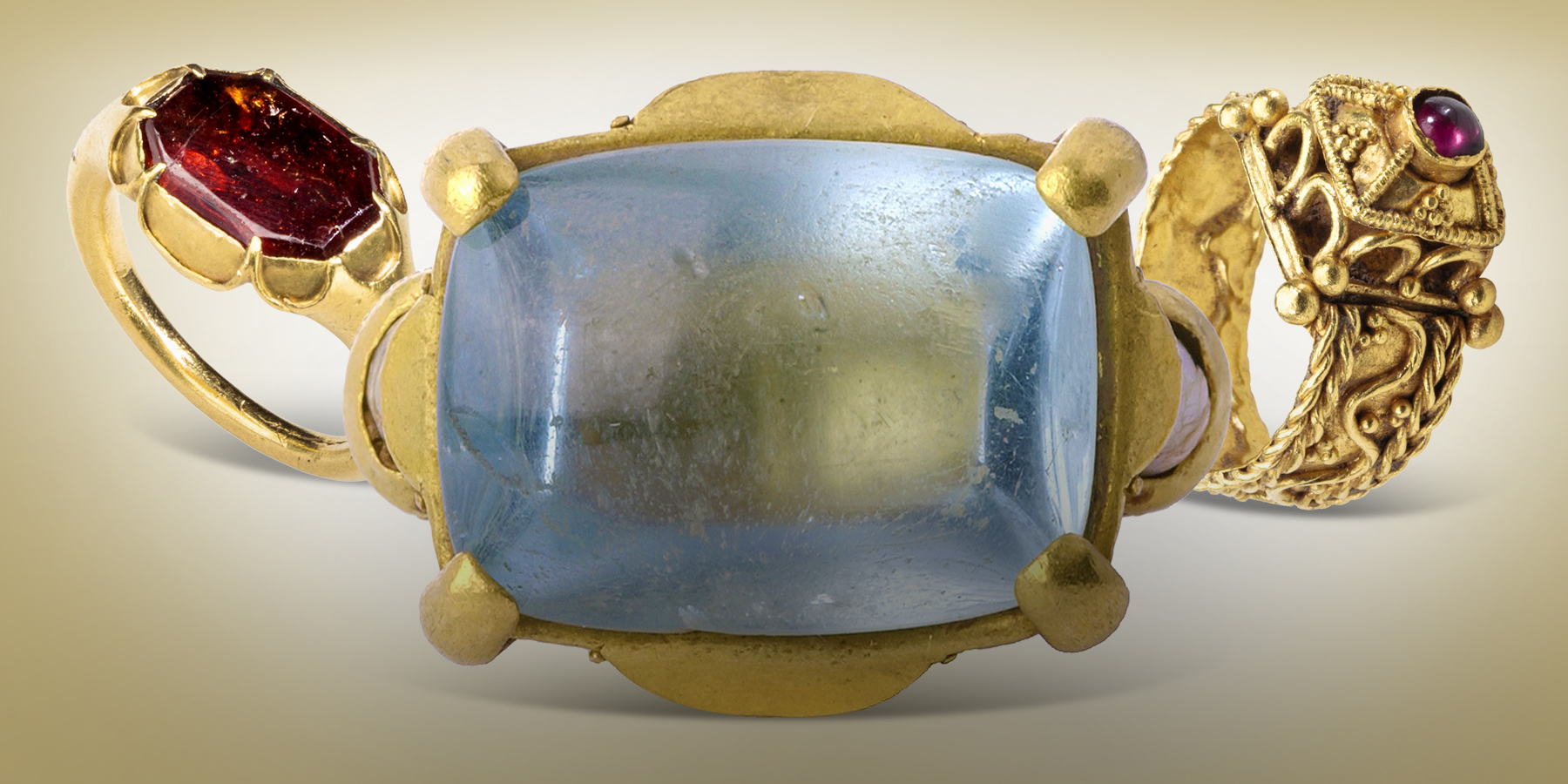 An exhibition of medieval rings and related paintings at the Metropolitan Museum of Art's Cloisters considers the jewelry's historical significance in the West — and the power of gemstones in superstitious beliefs. 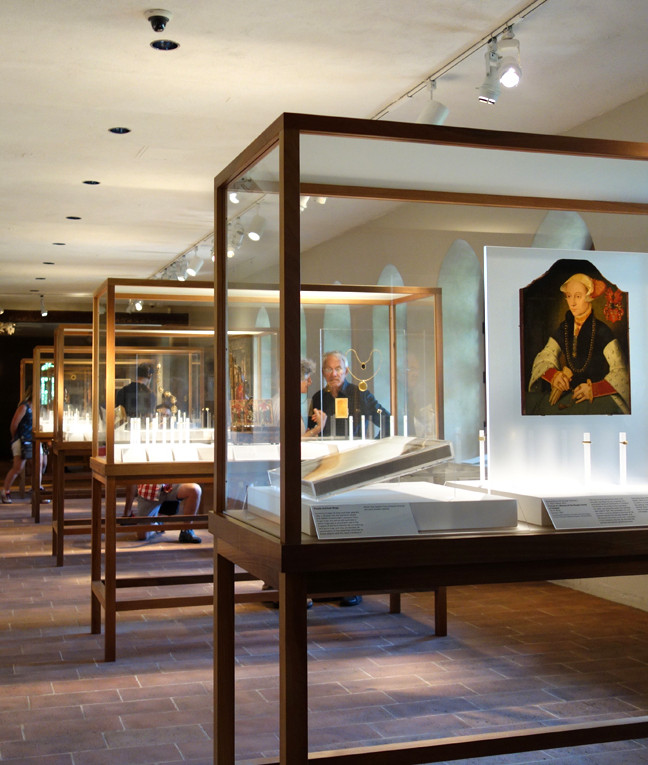 Rings are objects that people connect to, and so they can be a way of bringing the Middle Ages, a period that might feel remote and strange, closer to our visitors,” says C. Griffith Mann, curator in charge of the Metropolitan Museum of Art’s department of medieval art and The Cloisters, in upper Manhattan, where he has organized “Treasures and Talismans: Rings from the Griffin Collection.”

Drawn from the Griffin Collection — which is named after the mythical guardian of treasure and has been loaned to the Cloisters by an anonymous collector who amassed the rings over a 30-year period — the exhibition includes more than 50 rare and intricate rings dating from antiquity through the late Renaissance, shown together with related paintings and objects selected from the Met’s own holdings. “I felt it was really important to provide a context for understanding the kinds of people who would have worn these rings as well as the uses to which rings were put,” Mann says.

Some of the rings commemorate life events such as marriage — but with heavy baggage. The Renaissance Gimmel Ring with Memento Mori from Germany, for instance, is inscribed with the year 1631 and the names of the bridal couple on the outside of the gold band. The ring splits open to reveal two secret little chambers: one holding a curled-up infant, the other a skeleton in the same position. “Memento mori rings are associated with the practice that emerges in the Renaissance of meditating on the nearness of death to one’s life,” Mann explains. “The idea was that it would be an incitement to further devotion.” 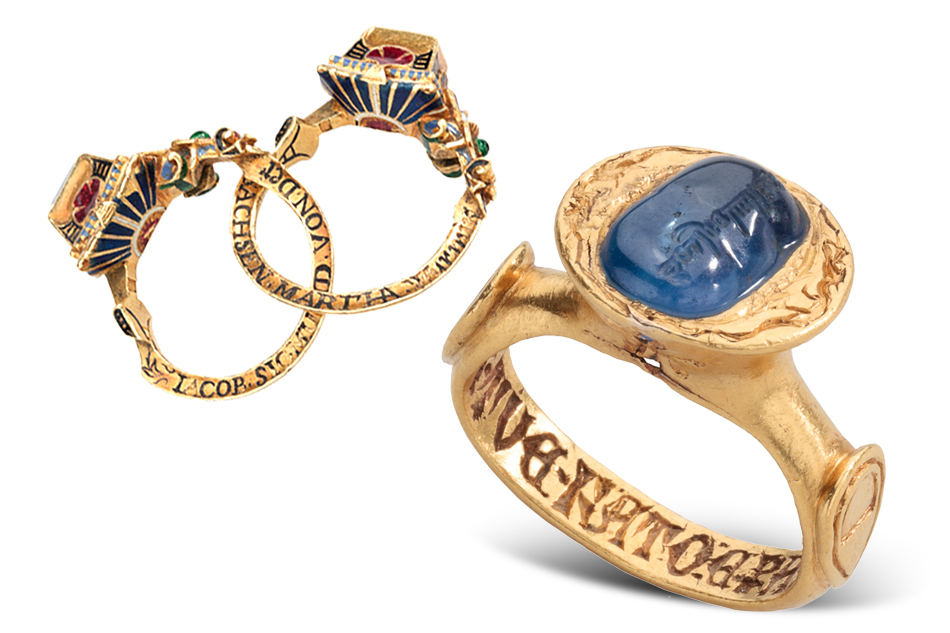 The German Renaissance Gimmel Ring with Memento Mori, 1631 (left), in gold, enamel, diamond and ruby, commemorates a marriage and also serves as a reminder of death. The Italian Medieval Inscribed Sapphire Ring, late 14th century, repurposes a sapphire engraved with Islamic text, possibly from the 10th century. Courtesy of the Griffin Collection, photos by Richard Goodbody 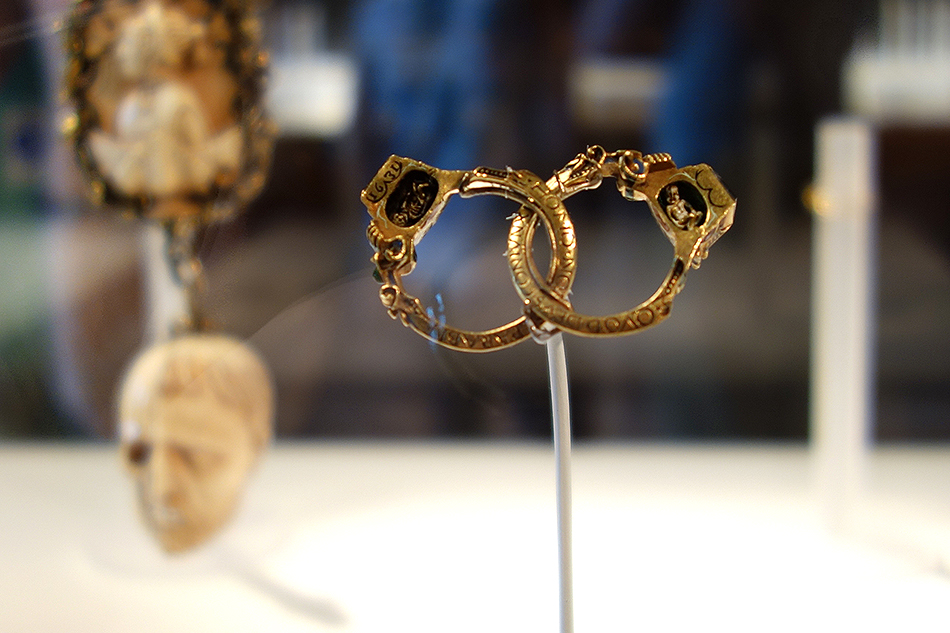 This view of the Renaissance Gimmel Ring demonstrates how the band splits open to reveal two hidden chambers housing a baby in one part and a skeleton in the other. Photo by Allison C. Meier/Hyperallergic 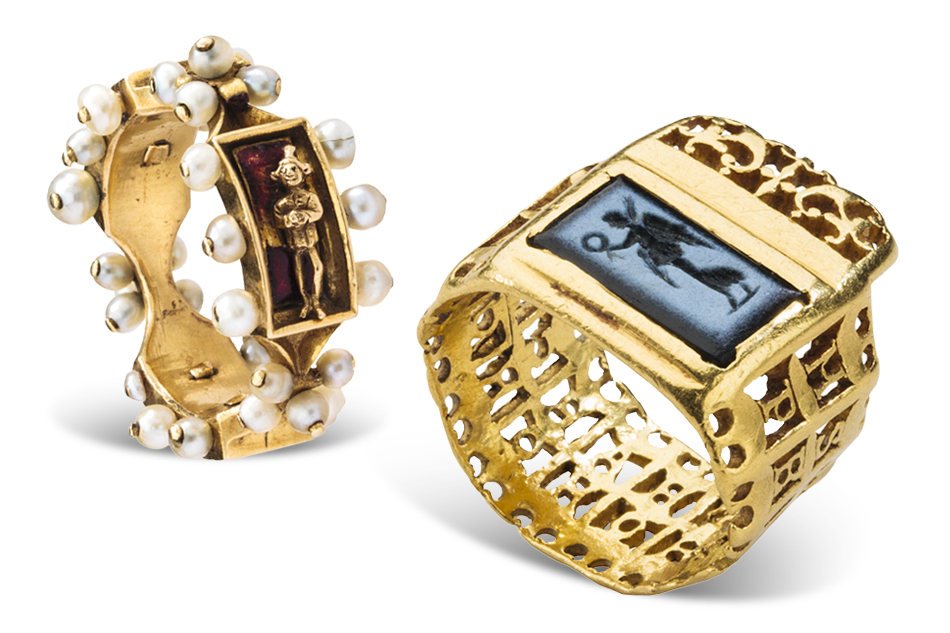 Figures were thought to protect the wearers of rings such as the Renaissance Enamel Ring, mid-15th century (left), with gold, pearls, ronde-bosse and red enamel, and the Late Roman Key Ring “Homonea,” late 3rd or early 4th century, in gold and nicolo. Courtesy of the Griffin Collection, photos by Richard Goodbody 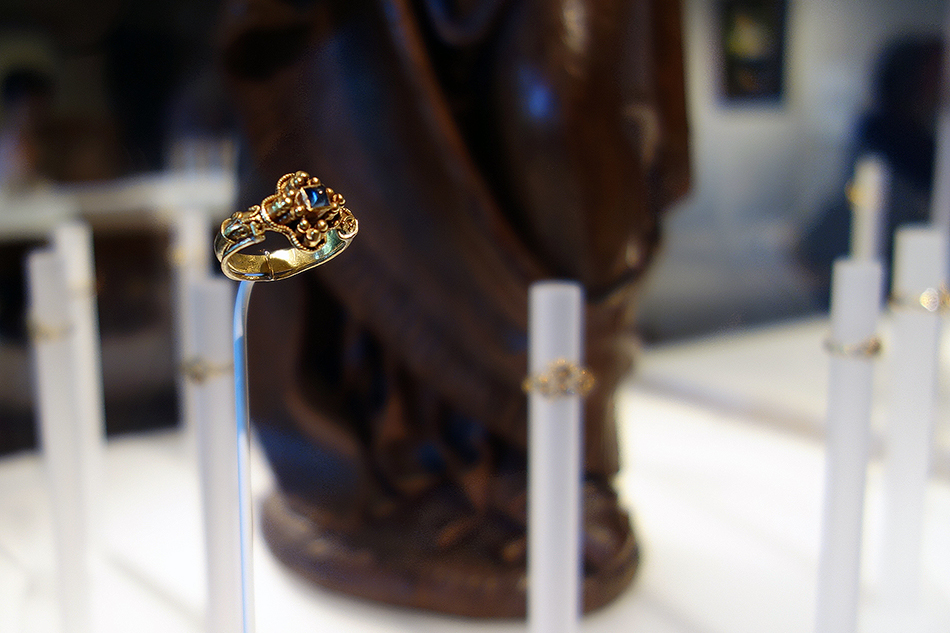 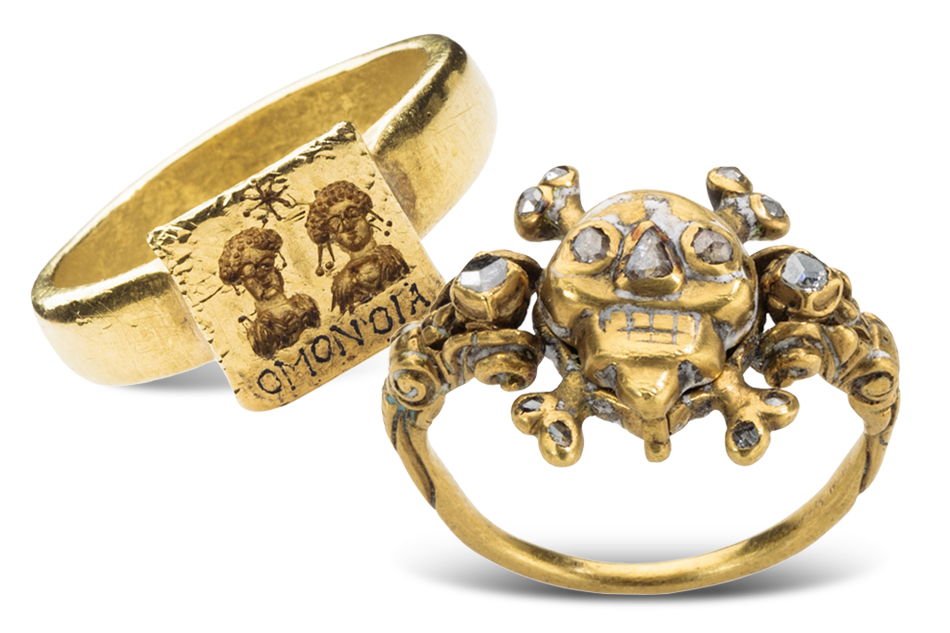 Some Europeans wanted to remember life partnerships, as with the Byzantine Gold Marriage Ring, 6th–7th century (left), while others preferred to ponder mortality, like in the English Kuli Memento Mori Locket Ring, 17th century, in gold, enamel, diamonds and ruby. Courtesy of the Griffin Collection, photos by Richard Goodbody 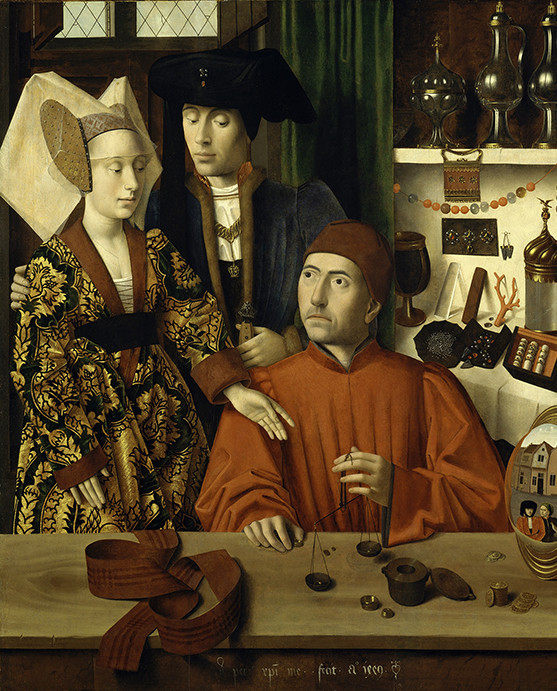 The Goldsmith in His Shop, 1449, by Netherlandish painter Petrus Christus, shows a jeweler consulting with a young couple. © The Metropolitan Museum of Art, New York

Other rings would have been worn for their protective talismanic qualities. Several examples of 15th-century British “iconographic rings” have images of saints engraved in the gold surface, including Saint Catherine and Saint Anne. “Keeping saints literally on your body would ensure that their protective powers would apply to the wearer of the ring,” Mann says. Coral was considered particularly effective at warding off evil spirits. Sapphire was associated with truth-telling and was often incorporated in episcopal rings worn by clergymen, such as the French 13th-century Gothic Bishop’s Ring, in which the dark blue stone is encircled by a phalanx of golden cylinders.

Contemporaneous paintings in “Treasures and Talismans” (on view through October 18) reveal how the rings would have been worn in their day. At the center of Scenes from the Life of Saint Augustine of Hippo, circa 1490, the titular saint is being crowned bishop, with his gloved hand bedazzled by five rings, likely marking his long career in the church. “That’s a painting I’ve looked at a number of times,” says Mann, “and it wasn’t until I started thinking about rings that I even noticed there were all these rings on his gloved hand.” The curator also noticed that the hoops of these rings were made extra large to fit over the gloved fingers of an ecclesiastic.

Elsewhere in the exhibition is The Goldsmith in His Shop, 1449, by Petrus Christus, one of the great Netherlandish paintings in the Met’s collections. It shows a young couple in consultation with a skilled craftsman surrounded by the materials and products of his trade, for which there are many analogs in the exhibition. “You have this moment of a couple coming to look together at what the goldsmith has in his shop, and at the very heart of that painting is a ring that he’s weighing for them in the scale on the counter in front of him,” Mann says. “We focused on works that would bring the rings themselves to life.” 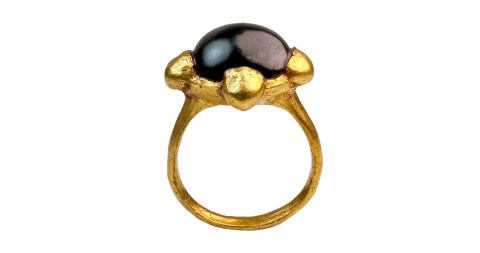 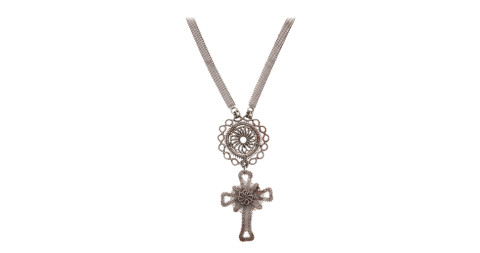 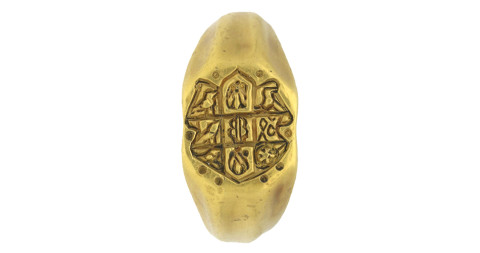 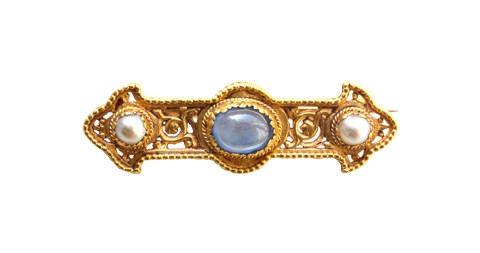 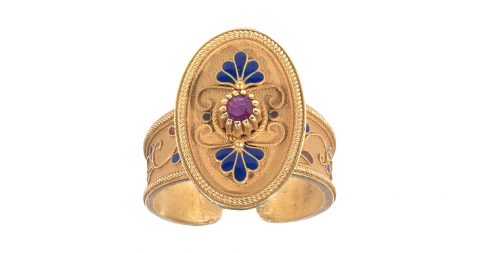