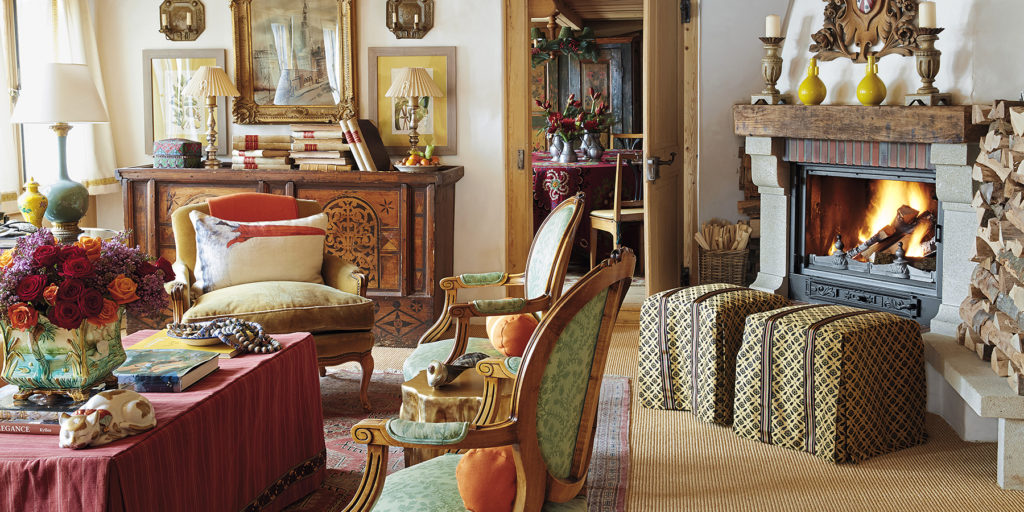 The globe-trotting Dallas designer and shopkeeper likes to go big and exotic. In her first book, she shows off her “more is more” sensibility. 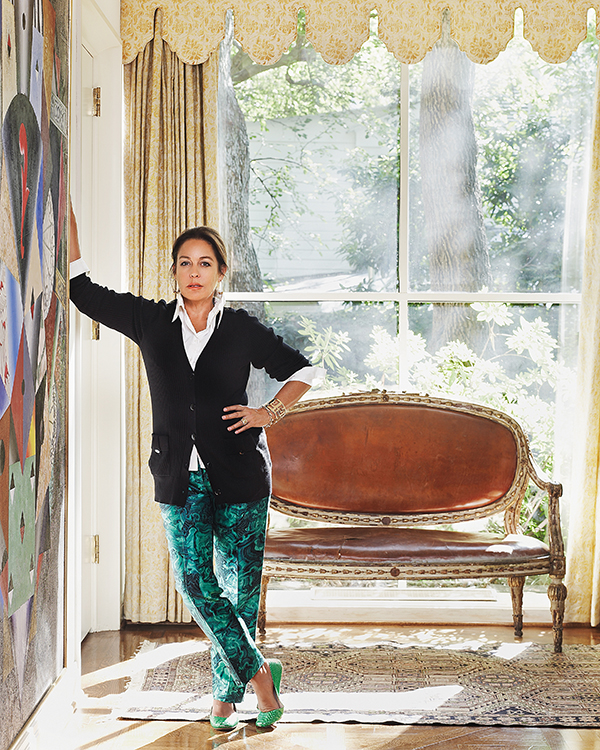 September 19, 2016Working through her company, Ceylon et Cie, Dallas designer Michelle Nussbaumer leverages her twin passions for travel and collecting to stylishly inform the interiors she creates for herself and her clients (portrait by Stephen Karlisch). Top: In the living room of her home in Gstaad, Switzerland — featured in her new monograph, Wanderlust  — a French majolica vessel sits atop a coffee table, with an 18th-century painted Swiss chest behind. Photo by Melanie Acevedo

It says something about designer Michelle Nussbaumer that she dubbed her 10,000-square-foot Dallas showroom Ceylon et Cie. The island nation of Ceylon was renamed Sri Lanka in 1972, of course, but the older name is far more evocative of its rich culture and historical significance. Consider its location on the Silk Road, its primary role in the spread of Theravada Buddhism and its status as a way station for the 19th-century ships that left its ports loaded with tea, coffee and rubber, their prows turned toward Europe.

It also says something about Nussbaumer that she counts among her style icons Gayatri Devi, the beautiful maharani consort of Jaipur in the 1940s; the designer and architect Renzo Mongiardino, known for his spectacular, finely detailed interiors; and actress Ava Gardner, the epitome of a glamorous femme fatale. Other inspirations include the designer Tony Duquette, with his love of extravagance; and Kalef Alaton, the Turkish-born decorator and cultural polyglot.

Not surprisingly, Nussbaumer’s interiors are anything but minimal. “If less is truly more for you, then go with more less,” she says paradoxically. “Your home is your sacred place. Whatever you love, do it to the max.”

Nussbaumer’s interiors read like epic novels densely packed with intriguing plot twists, scenes set in a succession of colorful locales, characters both humble and high-born. Many are showcased in her first book, Wanderlust (Rizzoli), which has just been released.

“My parents went to Japan in the early 1960s, and they traveled all over Africa,” says the Texas-born designer. “They would come back to Dallas with bags and bags of treasures, which I would steal. We would go to Mexico every year, and we had a house in New Mexico where we’d visit the Native American reservations.” This instilled in Nussbaumer both a thirst for travel and, she says, “a love of the tribal.” 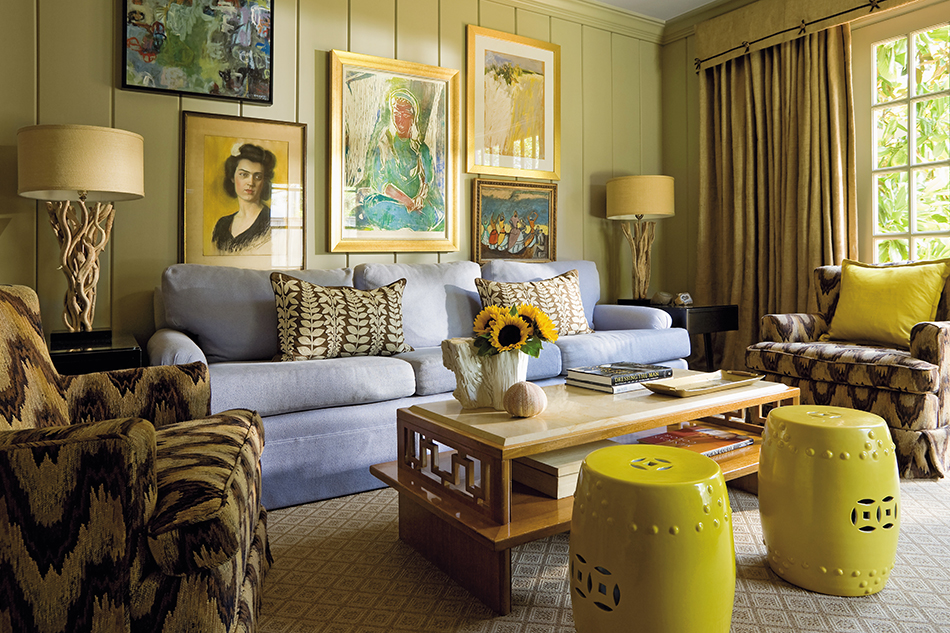 The book’s chapter titled “Dreaming in Color” shows off a yellow-accented family room in which paintings hung salon style over the couch introduce other vibrant hues. “I love the way the zigzag of the bargello-patterned fabric on the lounge chairs echoes in diminishing scale through the leaf pattern on the pillows and the sea urchin shell atop the coffee table,” Nussbaumer writes. Photo by Ka Yeung 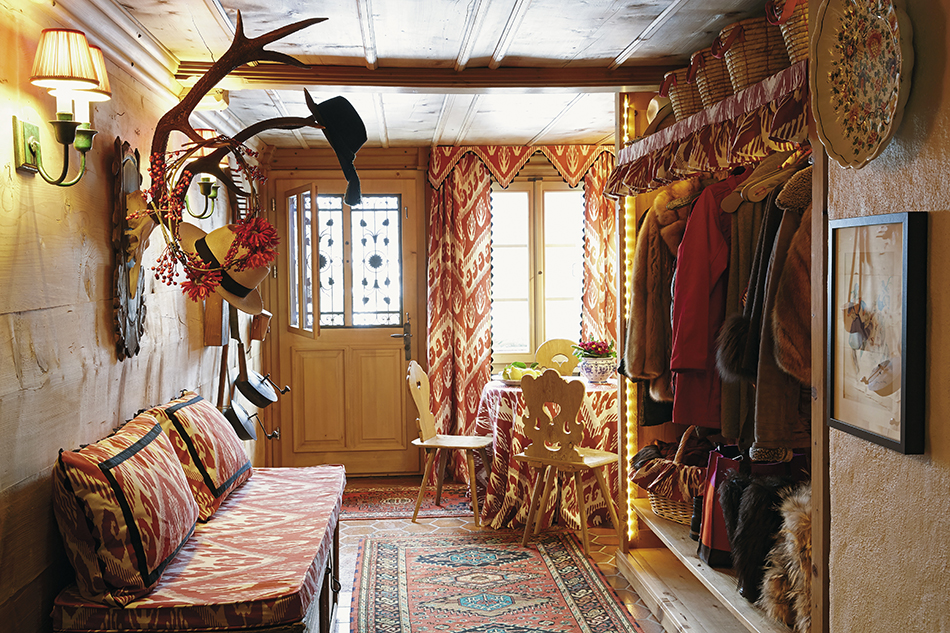 The mudroom of Nussbaumer’s Gstaad residence lies just off the kitchen and opens onto the breakfast area. She found the antlers at a local flea market, while the fabrics are all from her own collection. Photo by Melanie Acevedo 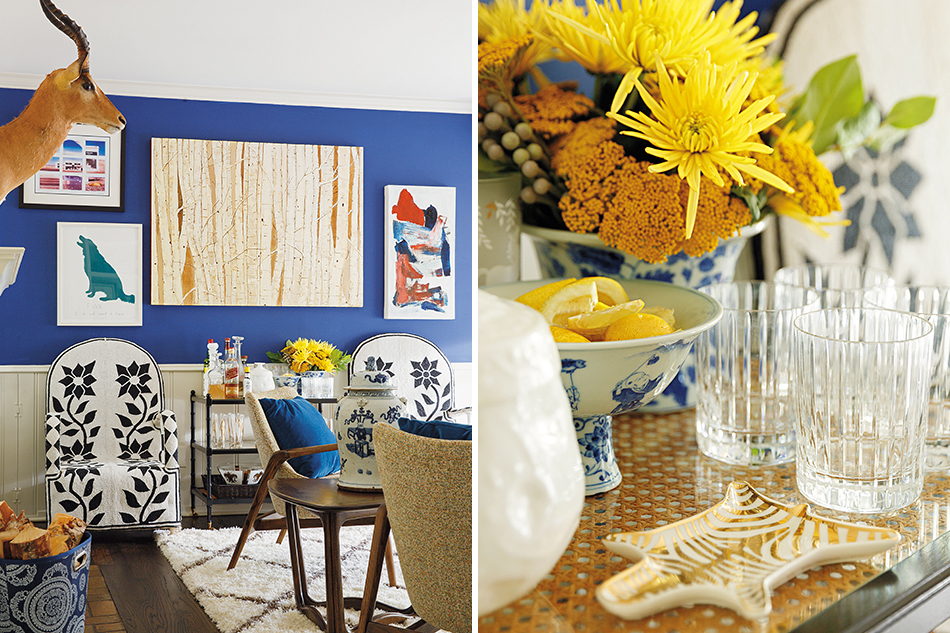 A faux-bamboo bar cart flanked by beaded African chairs injects a bit of fun and fancy into a home office otherwise filled with sleek Danish modern furniture set on a Moroccan rug. Baccarat tumblers and antique blue-and-white Chinese porcelain sit on the cart, while, behind it, a deep-blue wall sets off an array of artworks. Photos by Stephen Karlisch 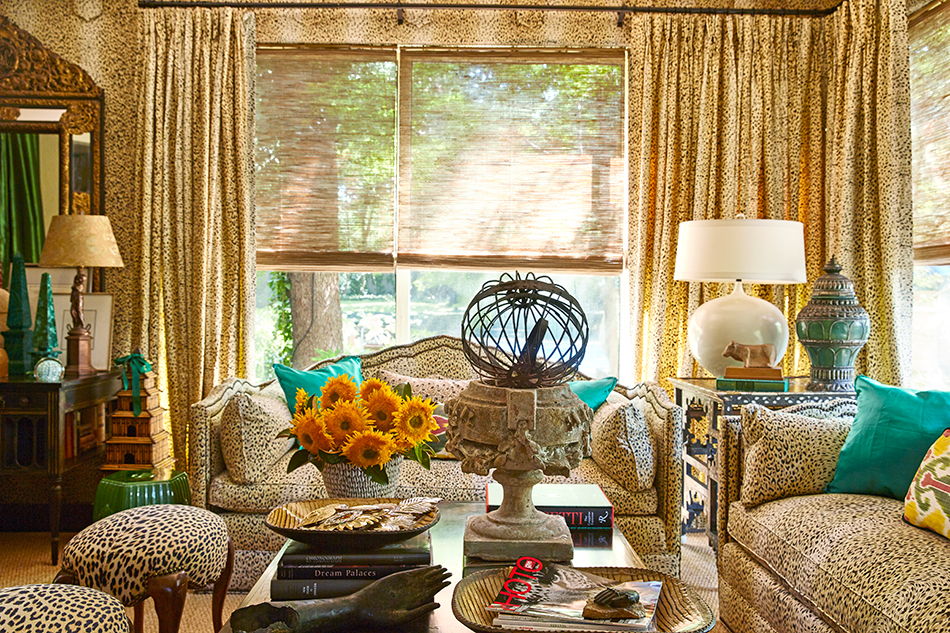 Nussabaumer covered the sofas of her Dallas sunroom in leopard print, completing the look with emerald green pillows and Moroccan pottery. “On the coffee table are some of my truly most favorite things,” she writes, “including a fourteenth-century bronze arm from Thailand.” Photo by Melanie Acevedo 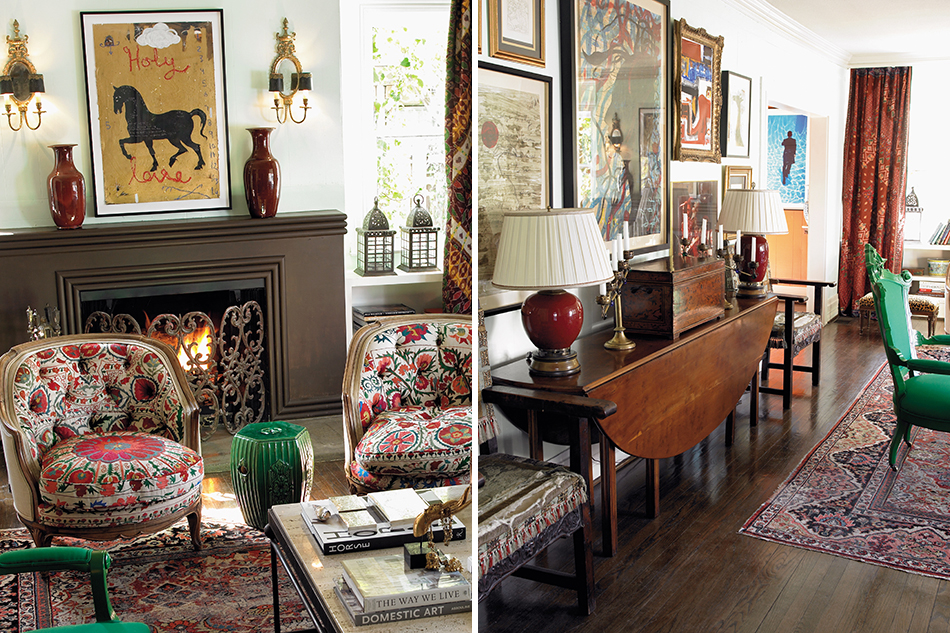 Left: In this space, Nussbaumer mixed the clients’ inherited pieces with vintage Suzani textiles and emerald green lacquerware. The painting over the fireplace is by Angelbert Metoyer. Right: “For high-impact drama, this collage wall contains modern and family works hung salon style,” writes Nussbaumer. “Panel draperies made from Sumatran textiles that I had sewn together add to the effect of floor-to-ceiling, wall-to-wall pattern.” Photos by Arturo Rodriquez Torres 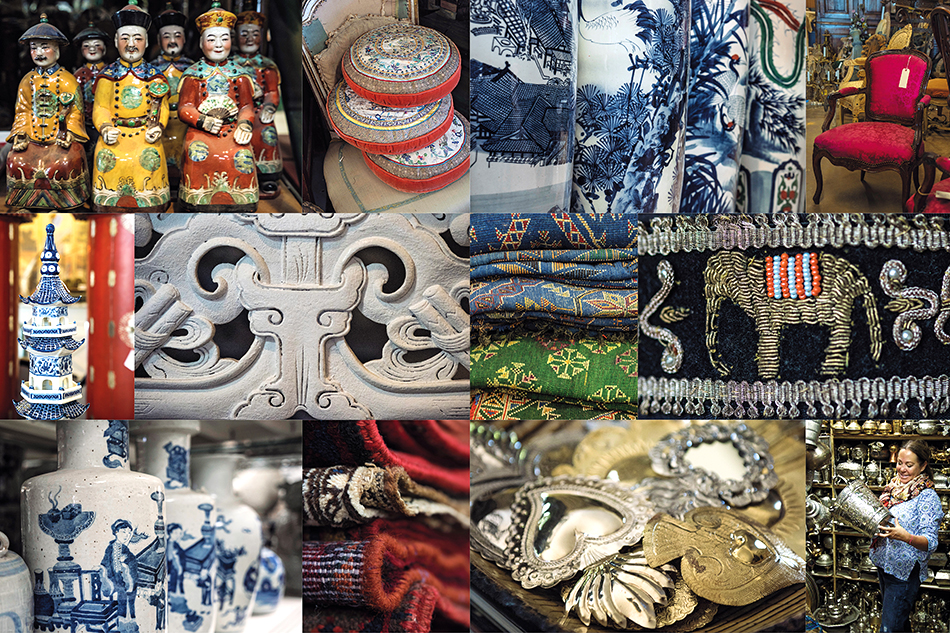 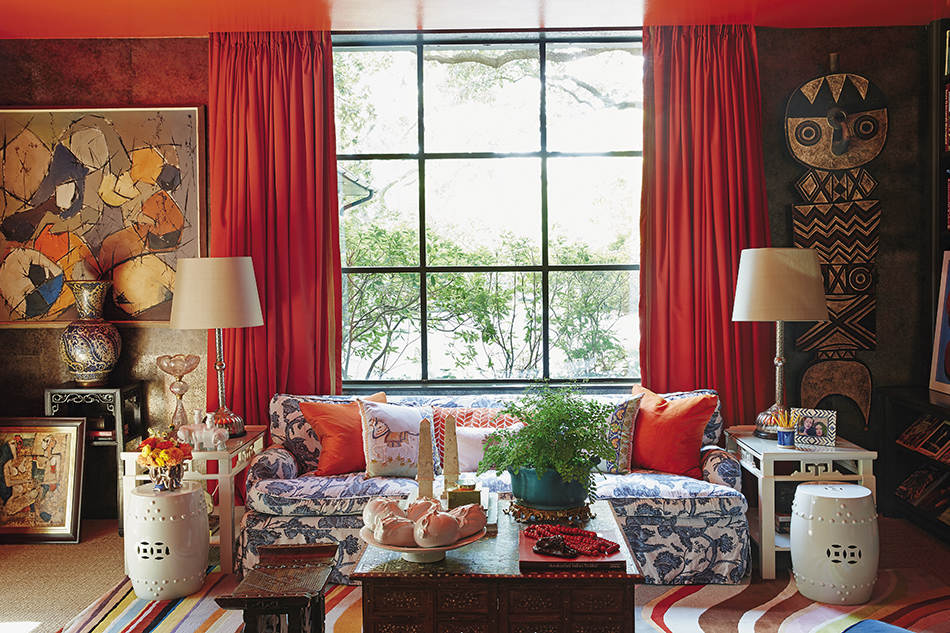 “Children always find the smallest, coziest room in the house,” Nussbaumer writes, adding that in her Dallas home, that’s the TV room. There, a ceremonial mask from Africa sits in one corner, balanced on the opposite side of the window by a painting from the 1940s. End tables that belonged to Nussbaumer’s grandmother flank the sofa. Photo by Melanie Acevedo 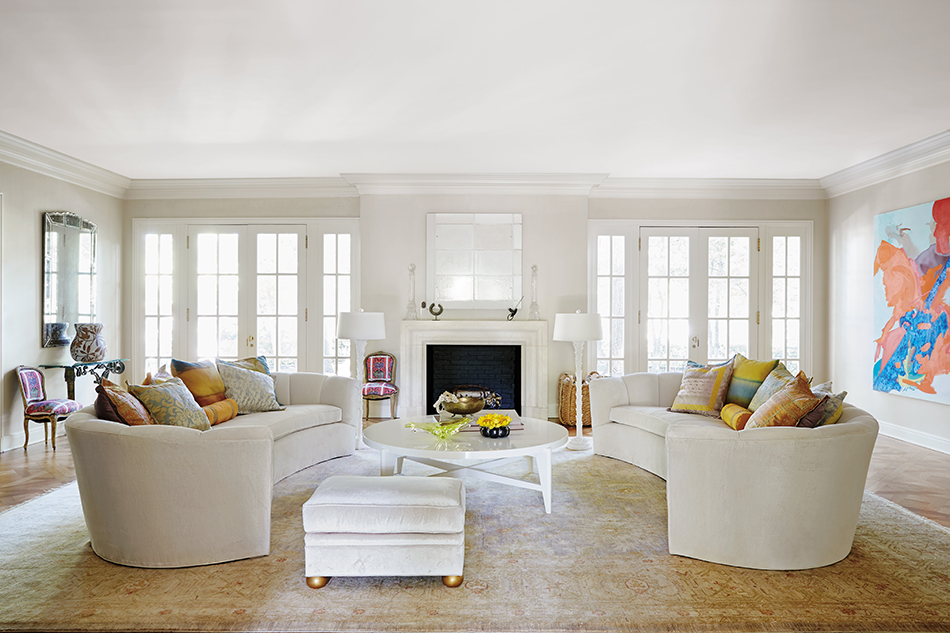 Although color and contrast often define a Nussbaumer interior, she’s more than capable of working with subtler, more monochromatic schemes. Here, her own Anais lacquered coffee table stands between a pair of custom sofas, while plaster floor lamps of her own design flank the fireplace. Photo by Stephen Karlisch 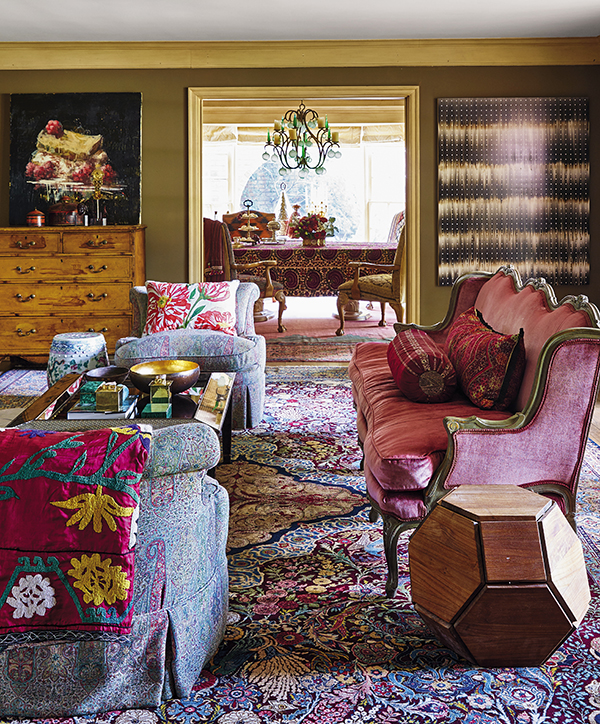 Working on the home of art-collecting clients whose spirit Nussbaumer describes as “bohemian,” the designer based her scheme for the living room on tribal textiles and a French sofa upholstered in rose-petal-hued velvet. Photo by Stephen Karlisch

“I always loved interior design, even though I didn’t know what that was at the time,” Nussbaumer recalls. Her creative impulse was nourished by her mother, a painter; her aunt, an antiquarian; and her grandmothers. “I had a traditional grandmother and a rather glam grandmother,” she writes in Wanderlust. “My more conventional grandmother, who played bridge and wore pearls, had a very ladylike, country-club sort of house. . . . My more theatrical grandmother was just the opposite, an Auntie Mame personality with purple velvet sofas, leopard carpets and an imperial-yellow convertible sports car who lived on a magical estate in West Texas. . . . The plurality of taste among these extraordinary women informed my own taste.”

In her freshman year at Southern Methodist University, which she attended planning to pursue a career in acting, Nussbaumer signed up for a stage design practicum that led her eventually to switch her intended profession. “It was about taking nothing and creating a fantasy out of it,” she says of the craft. After her time at SMU, she moved to New York for a while, then returned to Dallas, where she met her husband, Bernard Nussbaumer, a movie producer. The two married in 1984 and moved to Rome, where they lived in a villa on the Appian Way between houses owned by Valentino and Franco Zeffirelli. In her book, she recounts exhuming the marble arm of a goddess statue while digging a hole for a rosebush in the garden.

Wanderlust is filled with just these kinds of stories. Objects are like characters in the narrative of her life: the bejeweled Poseidon bust by Anthony Redmile bequeathed to her by a friend; birds’ nests brought to Nussbaumer by her youngest son; the bombé chest she and her husband bought on a trip to Venice; the palace Bidjar rug that was a gift from her father-in-law, a collector of antique carpets. 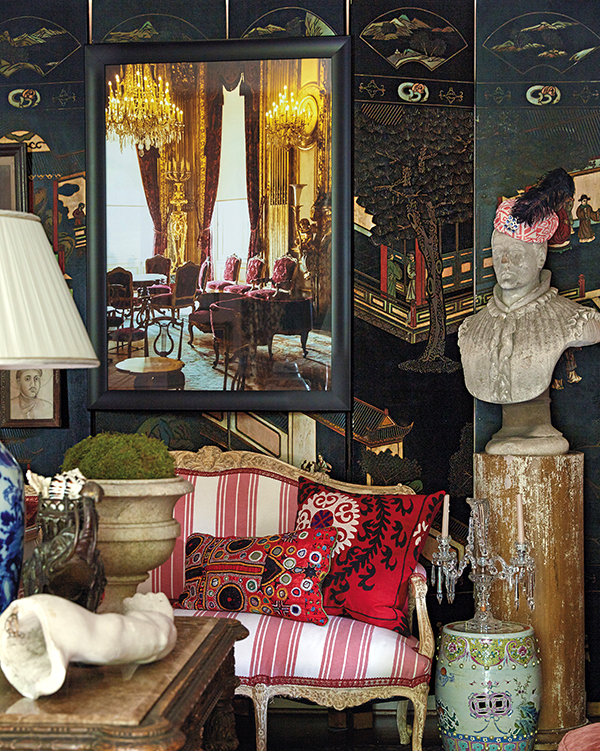 It was only when the family relocated to Los Angeles, in the early 1990s, that Nussbaumer began selling the antiques she had been amassing during her travels. “I decided I needed to get rid of some things. It was becoming my personal collection,” she says. So she and some girlfriends rented a space in a shop, and eventually she opened a gallery of her own, a precursor to Ceylon et Cie. Nussbaumer also began taking on decorating projects for her social circle. She continued along this path until the family moved back to Dallas, in 1996. At that point, she opened Ceylon et Cie, accepting just a few commissions, to have time to raise her four children.

Today, in addition to the aforementioned showroom, Ceylon et Cie has a 10,000-square-foot warehouse filled with stock. Nussbaumer still prefers to take on only two or three interiors at a time, but she now employs six people, and she designs furniture, fabrics, wallpaper, objects, jewelry and other products that she sells through her shop and her website. January will see the debut of the pop-up shop she’s creating for the Paris design fair Deco Off, and she’s already thinking about her next book, which she says will focus on homes in Mexico, including her family’s hacienda in San Miguel de Allende.

The designer describes her typical clients as “people who are under forty or even thirty-five. They are well traveled and some are multicultural. I really like working for younger people because they’re fun and open.”

Just how open those clients can be is apparent on page after page of Wanderlust. But the book begins and ends with her own homes in Dallas and Gstaad, Switzerland. These sections give the reader a true feel for the exuberance of her aesthetic: the pattern-on-pattern layering, the unabashed use of vivid color (particularly red), the mixing of the refined with the folkloric and the ethnic and the pairing of high style with accessibility and comfort. The result, she says, is very Continental: “In the homes of my European friends, it’s an accumulation of generations of stuff. It’s not a throwaway culture. And there’s an irreverence: You put your feet up on that eighteenth-century table. I want it to feel authentic, not like the designer just left the room.” 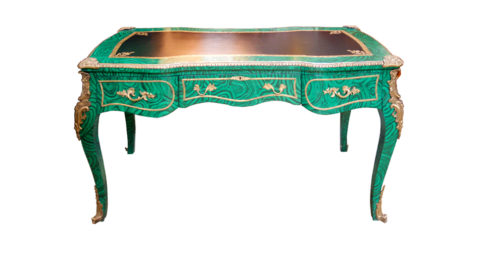 “This malachite desk is everything. Malachite is a neutral to me.” 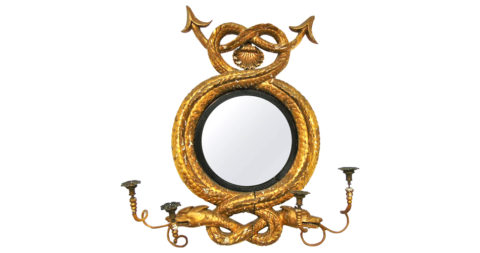 “This serpent Regency mirror makes my heart sing. The carving and condition are superb.” 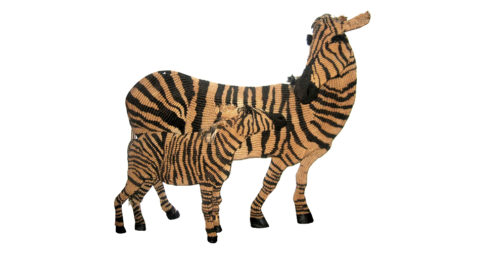 “These whimsical zebras are wonderful, and I love the pattern. I could see them in a very modern interior or a child’s room. Either way, they make a great statement.” 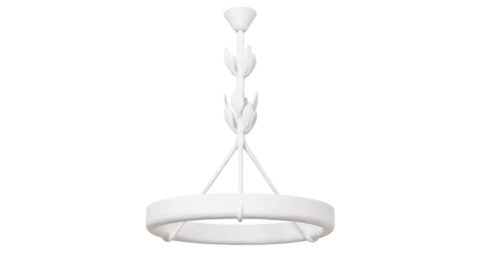 “A touch of plaster adds to any room.” 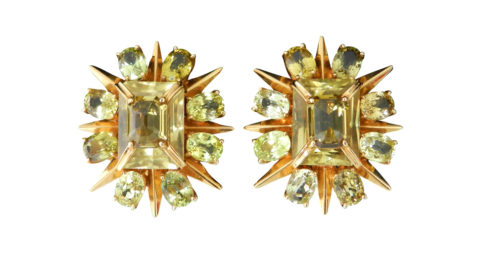 “I love anything and everything Tony Duquette ever did, and I covet these earrings.” 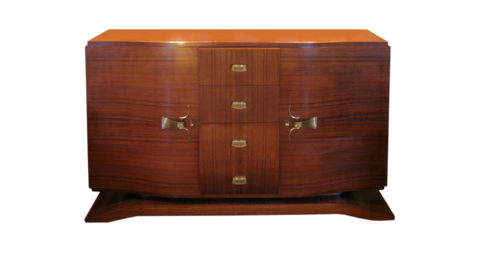 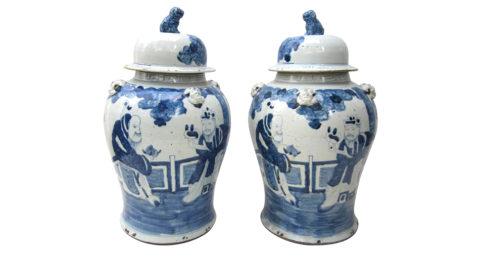 “Blue-and-white porcelain is a favorite. I have collected it for myself and recommended it to clients for years.”