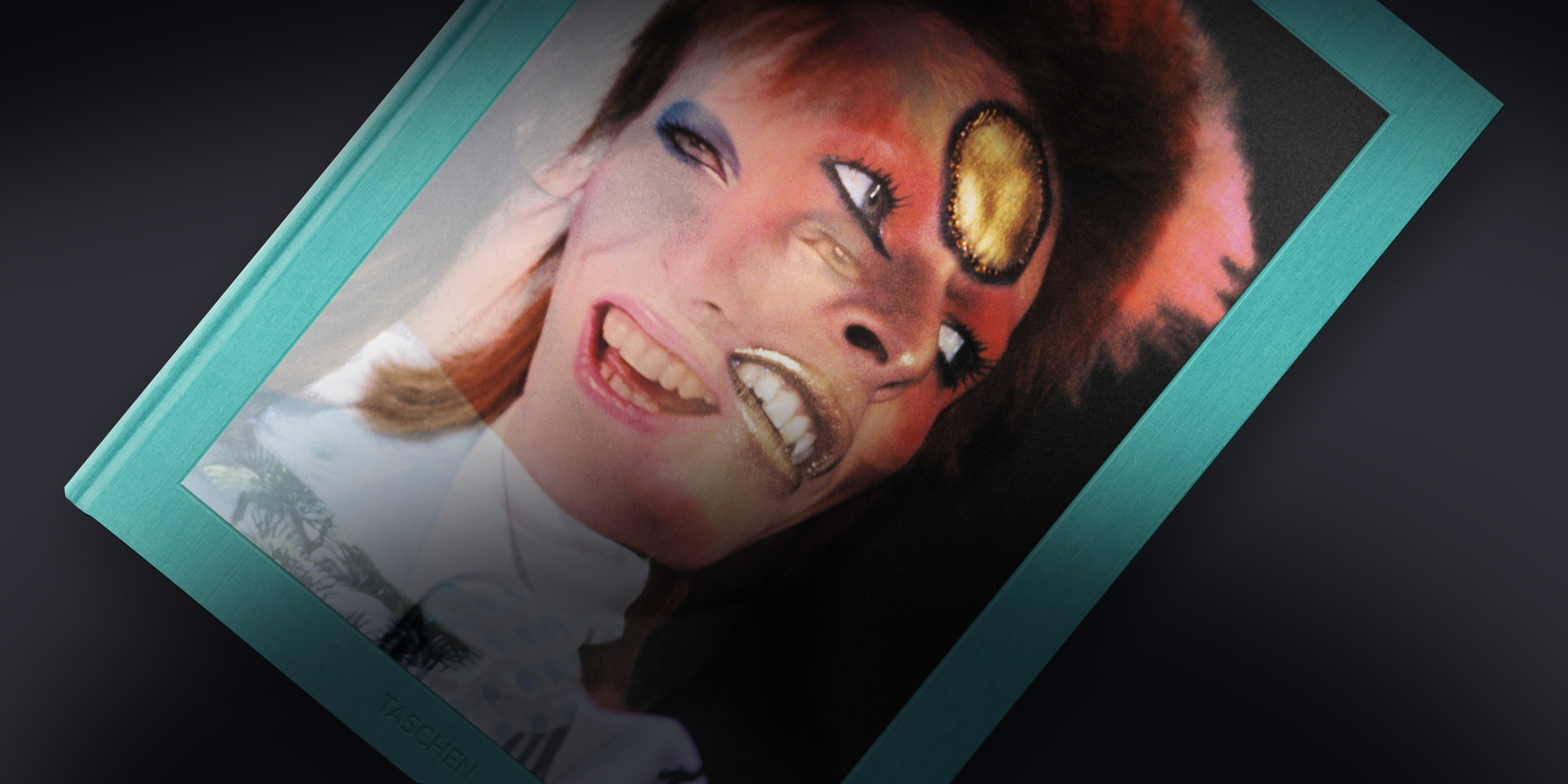 The Man Who Shot a Glittering David Bowie

The story behind Mick Rock’s amazing photographs of Ziggy Stardust, the fleeting but fabulous 1970s creation that made Bowie a rock legend. 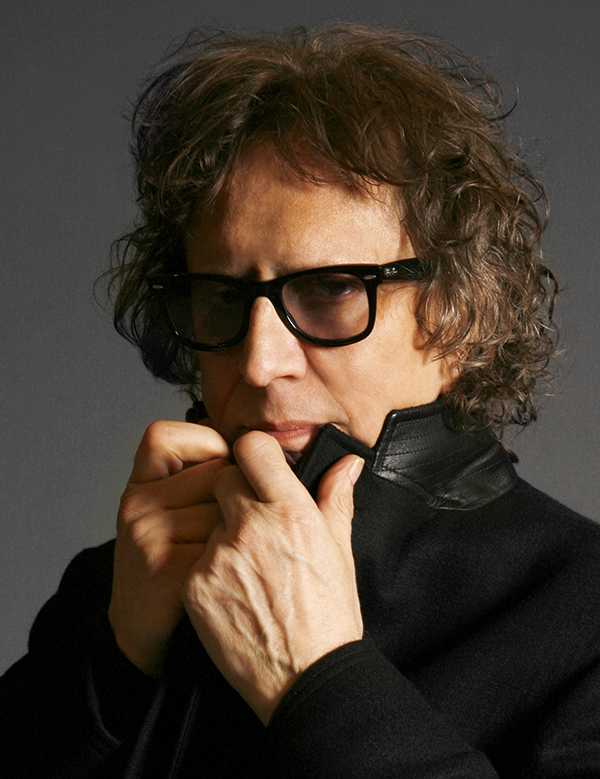 The British photographer Mick Rock made his reputation chronicling such rising rock stars as Iggy Pop, Lou Reed and the band Queen among others, hence his moniker: The Man Who Shot the ’70s (photo © Nathalie Rock). Top: The cover hologram on the limited collector’s edition of The Rise of David Bowie: 1972–1973. All photos courtesy of TASCHEN

History demonstrates it over and over again: There’s no substitute for being in the right place at the right time. The photographer Mick Rock — fortuitously named, in that he became the premier chronicler of the rock music scene of the 1970s and ’80s — is certainly proof of that axiom.

In 1972, he was in his early 20s, hanging around London, seeing cool new bands perform and doing a variety of odd jobs, including (but not limited to) freelance writing and snapping pictures. He saw a cult-hit performer named David Bowie, was introduced to him through a friend, and ended up meeting the singer for a drink.

“David was very charming and open and very congenial,” recalls Rock. “We’d go dancing at The Sombrero, which was this cute little gay club on Kensington High Street.”

A friendship blossomed at the exact moment that Bowie had his breakthrough: He assumed the far-out personality of Ziggy Stardust — sexually ambiguous, jumpsuited and covered in colorful makeup — creating one of the era’s most talked about characters and achieving a fame that continues to this day.

Rock became his official photographer, toting around an early Nikon camera called a Nikkormat and launching his own long career. Now TASCHEN is releasing The Rise of David Bowie: 1972–1973, a huge, heavy and glamorous compendium, available on 1stdibs, in which Bowie’s painted face holds the reader’s gaze from every page and from every pose imaginable. 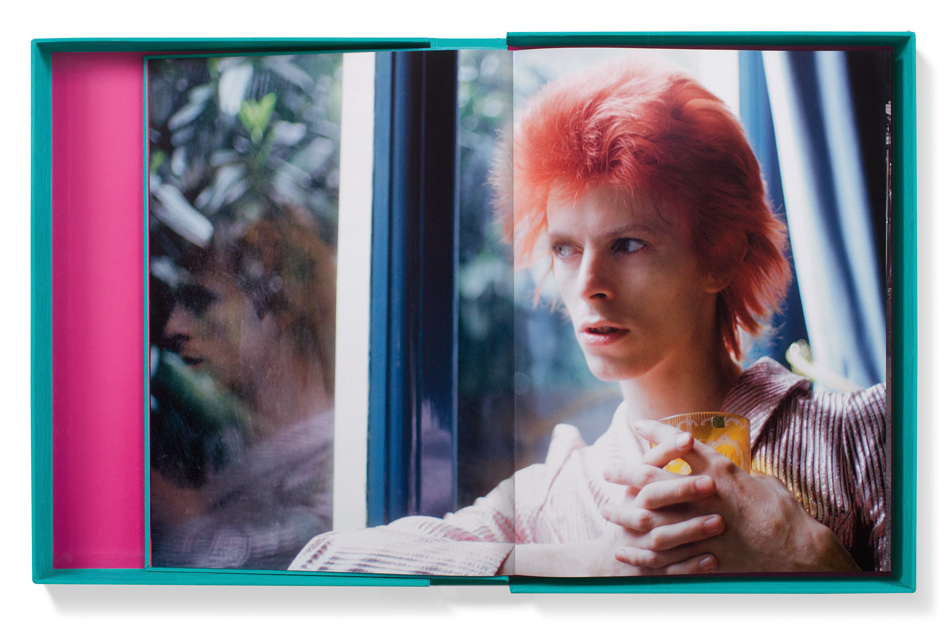 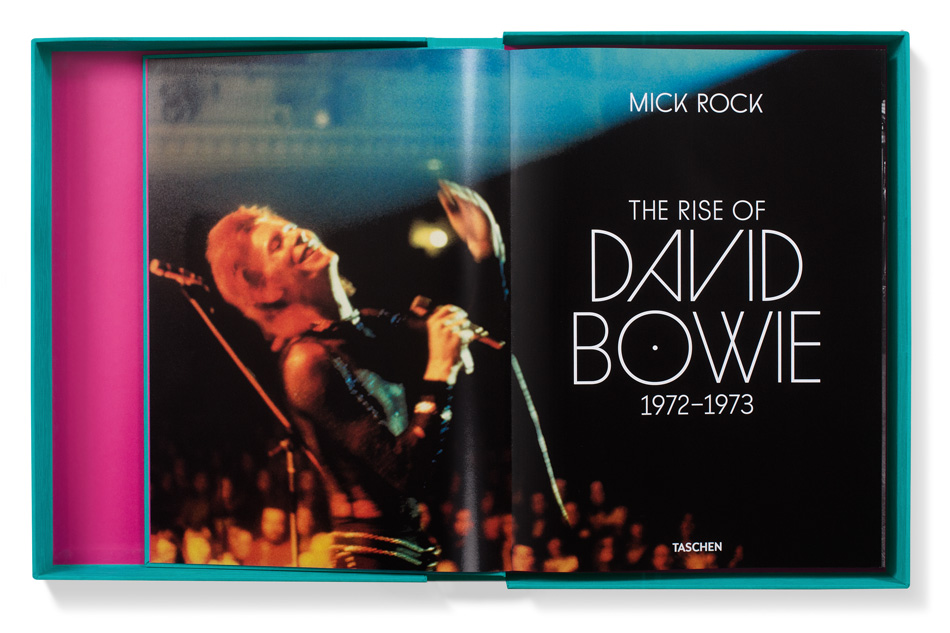 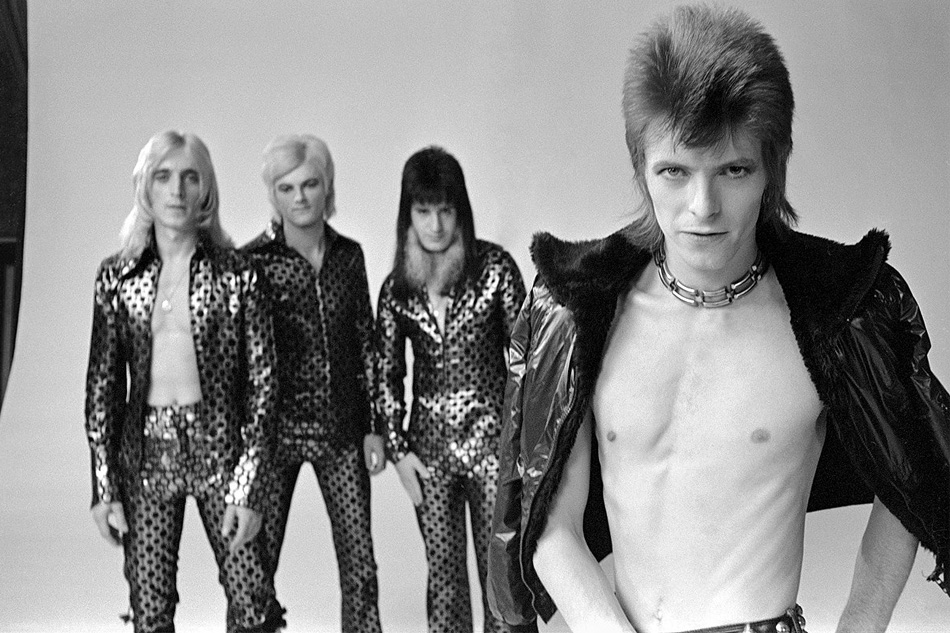 A still from the promo for The Jean Genie, San Francisco, October 1972. 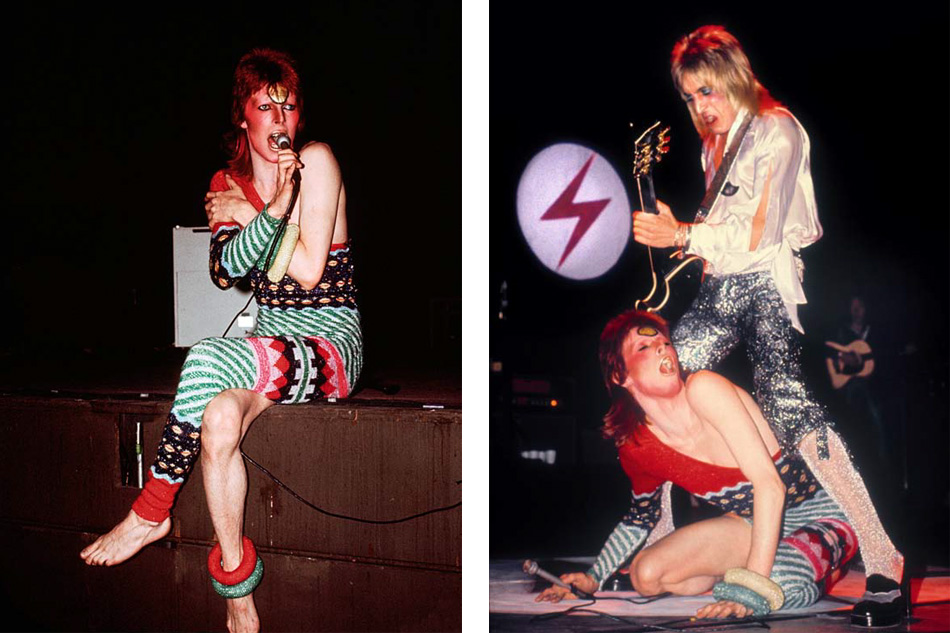 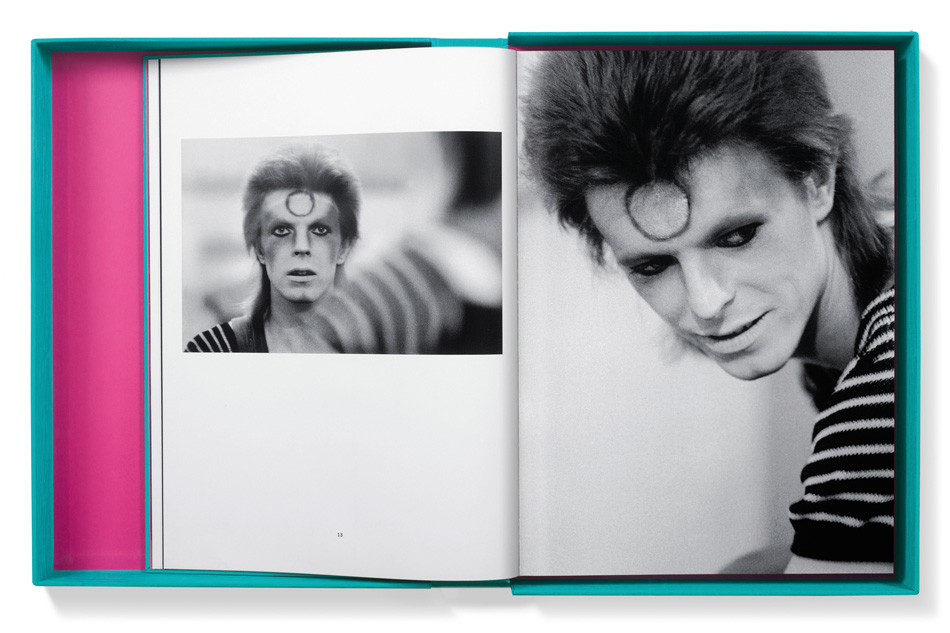 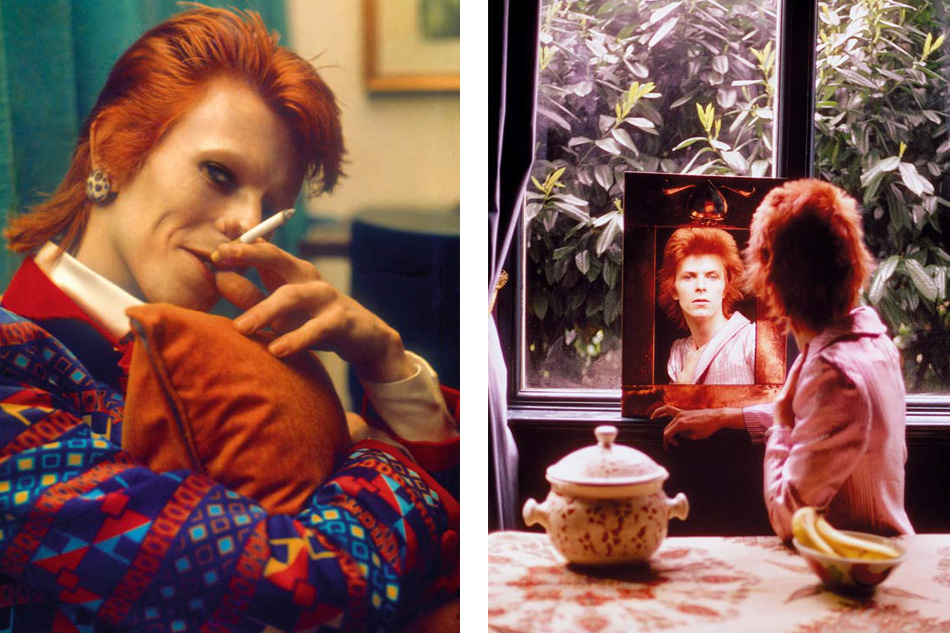 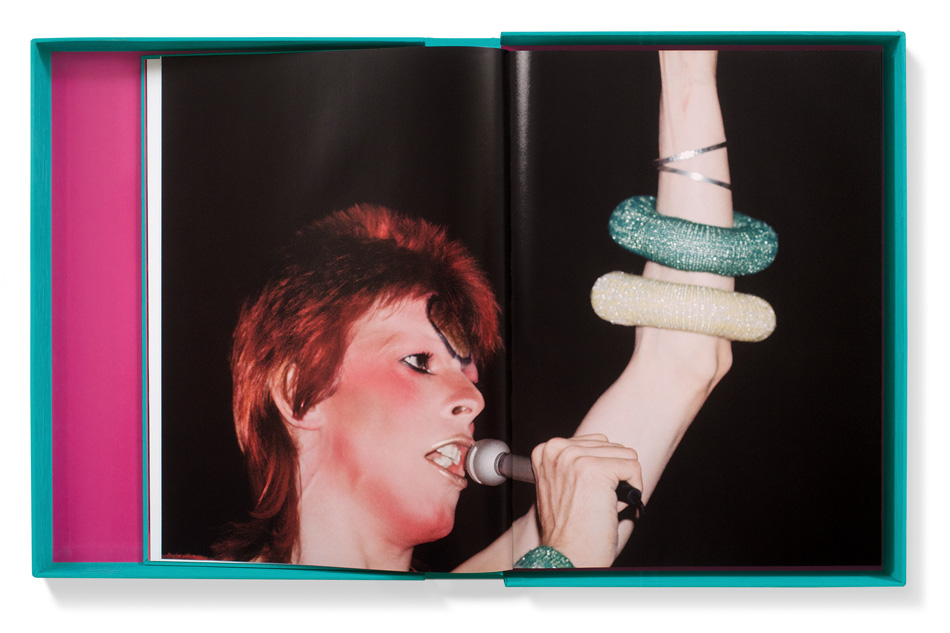 Many of the images haven’t been seen before, including some of those on display in an exhibition at the TASCHEN Gallery in West Hollywood, California. “Mick Rock: Shooting for Stardust, the Rise of David Bowie & Co.” opened last week and runs through October 11.

“I have him in seventy-four different outfits over that twenty-month period,” says Rock, 67, who, despite his British roots, has lived in New York for more than 30 years. “And I’m very glad I even got one of him sleeping.”

Ziggy Stardust was a limited run for Bowie, and the book chronicles the exact high point of the character’s fame. “He had to end it — otherwise he was going to get trapped,” Rock says. “But it’s still the period everyone wants to look at, even though there are so many fabulous pictures of him. He understood more than anybody else in that period the power of his image.”

A view of the exhibition “Mick Rock: Shooting for Stardust, The Rise of David Bowie & Co.” at the TASCHEN Gallery in Los Angeles. Far right image: David Bowie and Ronson, Lunch on train to Aberdeen, 1973 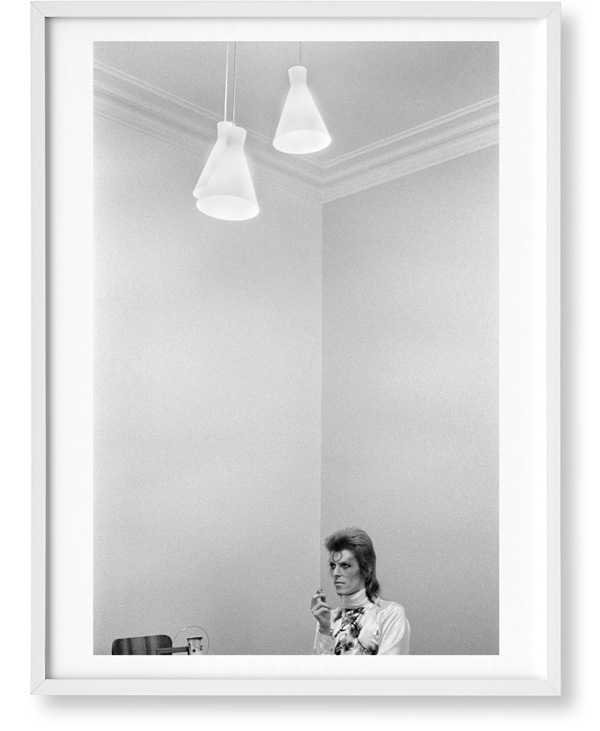 Bowie clearly anticipated something about performance art and shape-shifting identities. “Just look how far ahead of it all he was,” says Rock. “When I first showed up, no one was that bothered about shooting him. By the time it was over, every fucking photographer in the world wanted a piece of him.”

Rock was present at a cultural inflection point, but at a time when photographers lived hand-to-mouth. Still, if they were patient and lucky, rewards were on the horizon. “No one got paid by his manager,” Rock recalls of the time working for Bowie, and there weren’t a lot of outlets for selling pictures. “There were very few magazines and no Internet.” That meant, however, that Rock retained the rights to his images of rockers, from Bowie to Queen to Debbie Harry, and it also explains why The Rise of David Bowie is his 12th book: Rock has been smartly mining his archive, which he says is vast, numbering in the tens of thousands of images.

TASCHEN is releasing 1,772 copies of a limited collectors edition of the book (for $700), along with two art editions — each featuring a special pigment print and a run of 100 copies ($1,800). Bowie himself approved Rock’s selections and has signed every book in the editions. He and Rock are still in touch. But the icon didn’t write anything for this book, as he did for their first collaboration, 2005’s Moonage Daydream: The Life & Times of Ziggy Stardust. (Rise features text by music writers Barney Hoskyns and Michael Bracewell.) 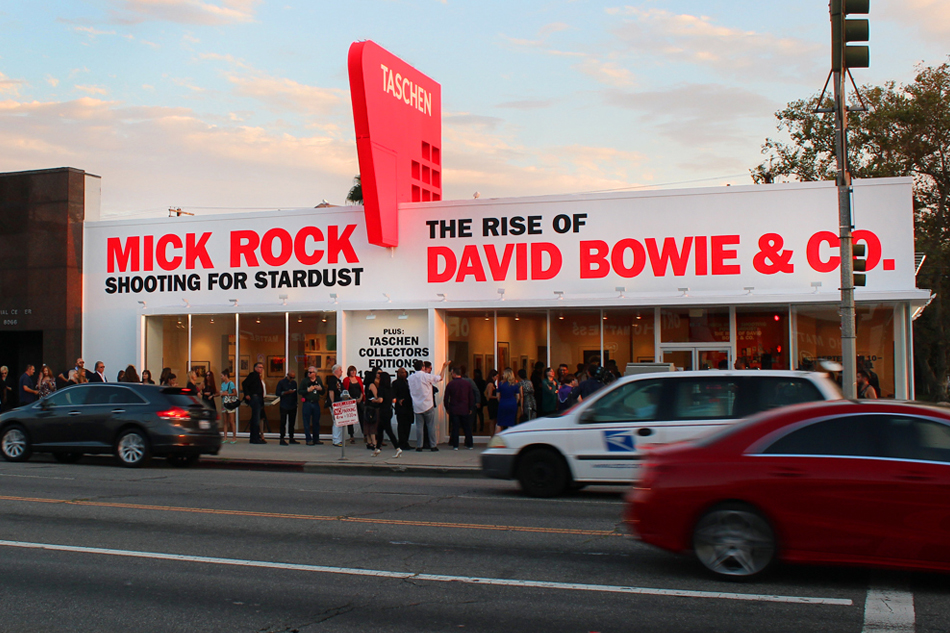 Invitees waiting to get into the opening of the exhibition of Mick Rock’s David Bowie photographs at the Taschen gallery in Los Angeles. Photo by Jessi Askinazi 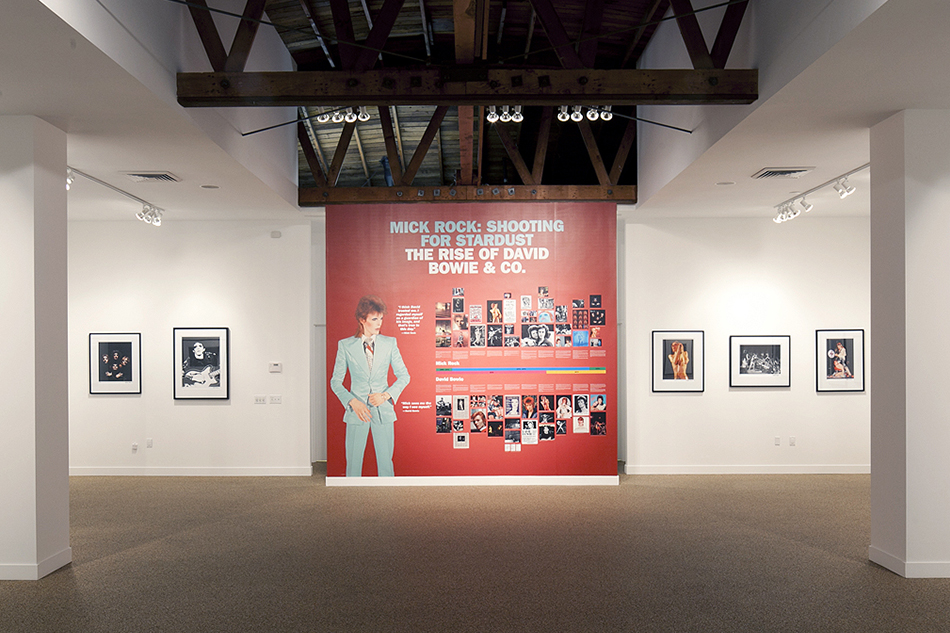 A timeline of the rise out of obscurity of both Mick and David. Photo by Greg Bojorquez 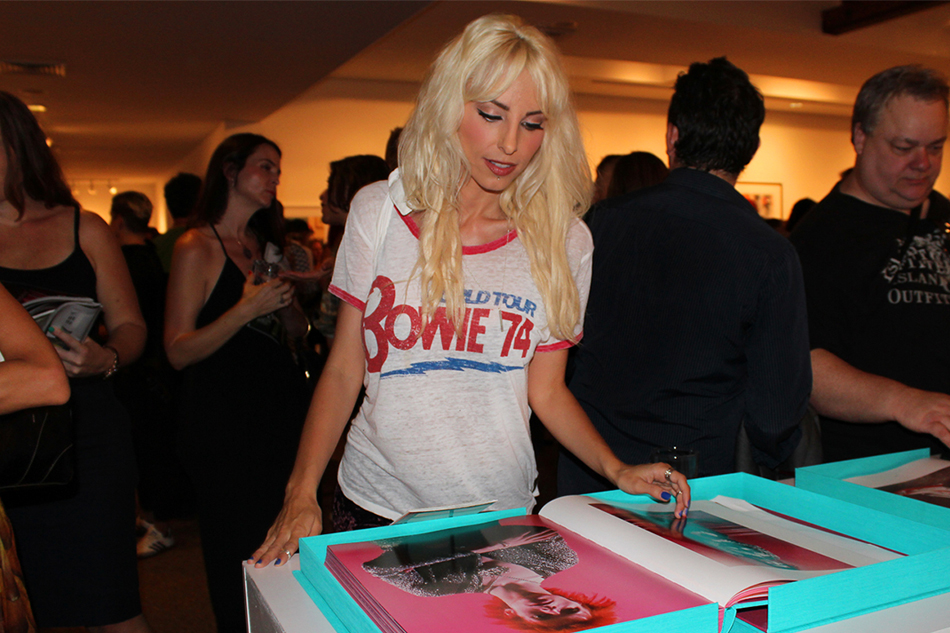 A Bowie fan flips through The Rise of David Bowie. 1972–1973. Photo by Jessi Askinazi 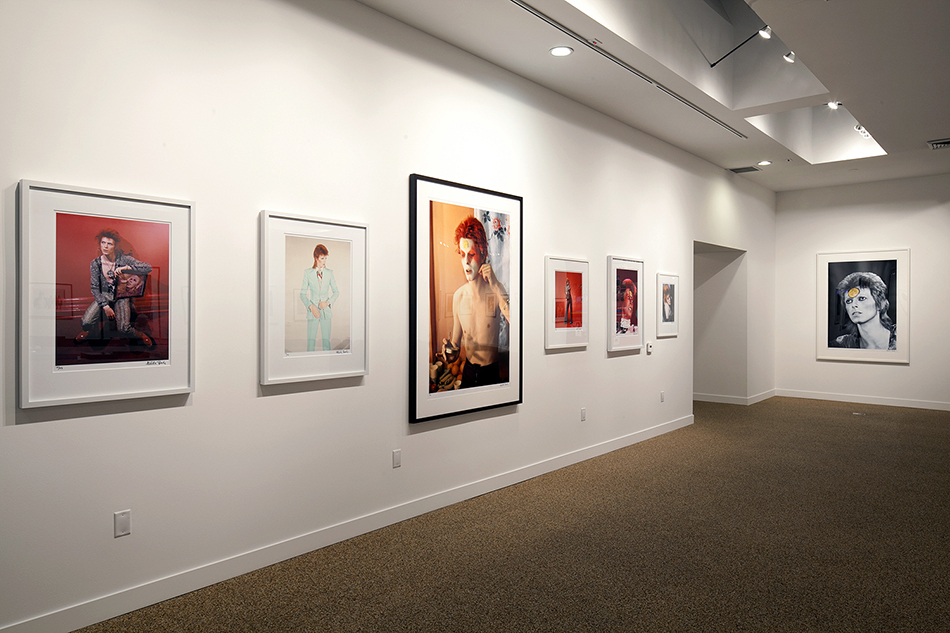 “I have him in seventy-four different outfits over that twenty-month period,” says Rock. “I’m very glad I even got one of him sleeping.” Photo by Greg Bojorquez 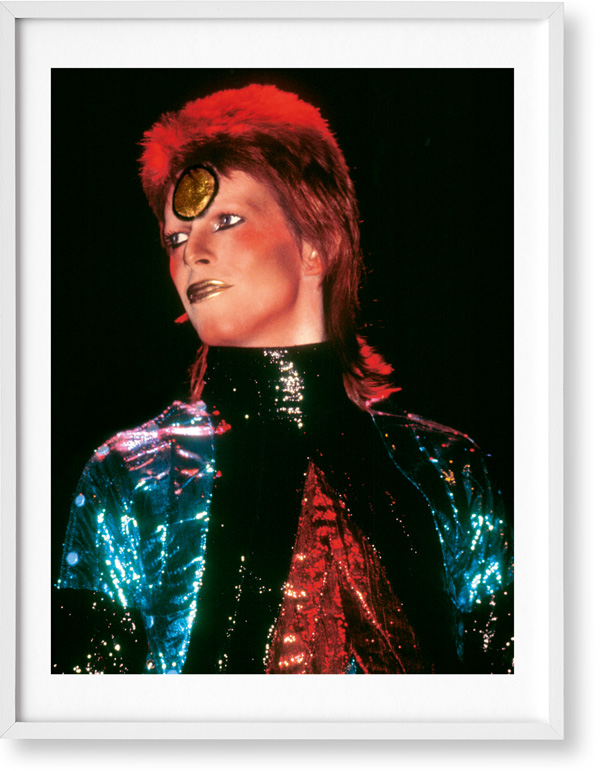 “He will not make any public statements at all — he hasn’t for the last decade,” says Rock, who knows why but isn’t saying. “He is in the Greta Garbo phase.”

Rock is considerably chattier. He grew up in West London and came into his own chronicling Iggy Pop, Lou Reed, Queen and Bowie, among others — hence his moniker: The Man Who Shot the ’70s. He moved to Staten Island in the 1980s, because his first wife (he’s now married to his third) was American, and it was an inexpensive place to buy a house. It was also a home base for enjoying the party scene of New York in that storied era — although that also caused him major problems.

“I call it my chemical years, from ’86 to ’96, when I was on overload and my output and the money was dwindling,” Rock says now. “Until I was broke and in hospital having quadruple-bypass surgery the Christmas of 1996. I did totally bottom out.”

But the wheel of fortune has a way of turning troubled middle-aged types into wise elders, and that transition has been in full swing for Rock for some time. He is still taking pictures — recently he has been shadowing the hip band TV on the Radio, and he has moved to a basic-model Canon camera (but like everyone else, he snaps a lot of pictures on his iPhone). In addition to mining his archive for books, the cutting-edge Vice Media is making a documentary on him, too.

Rock likes to reminisce, but his stories have the practical edge of a journeyman creative. “Everybody was young then — it was a very young world,” he says of that first, wild Bowie year on display in the book. And the pictures of that glorious time? “The best thing I did was to hang on to them.”