These Are the Designers to Know during NYC Jewelry Week 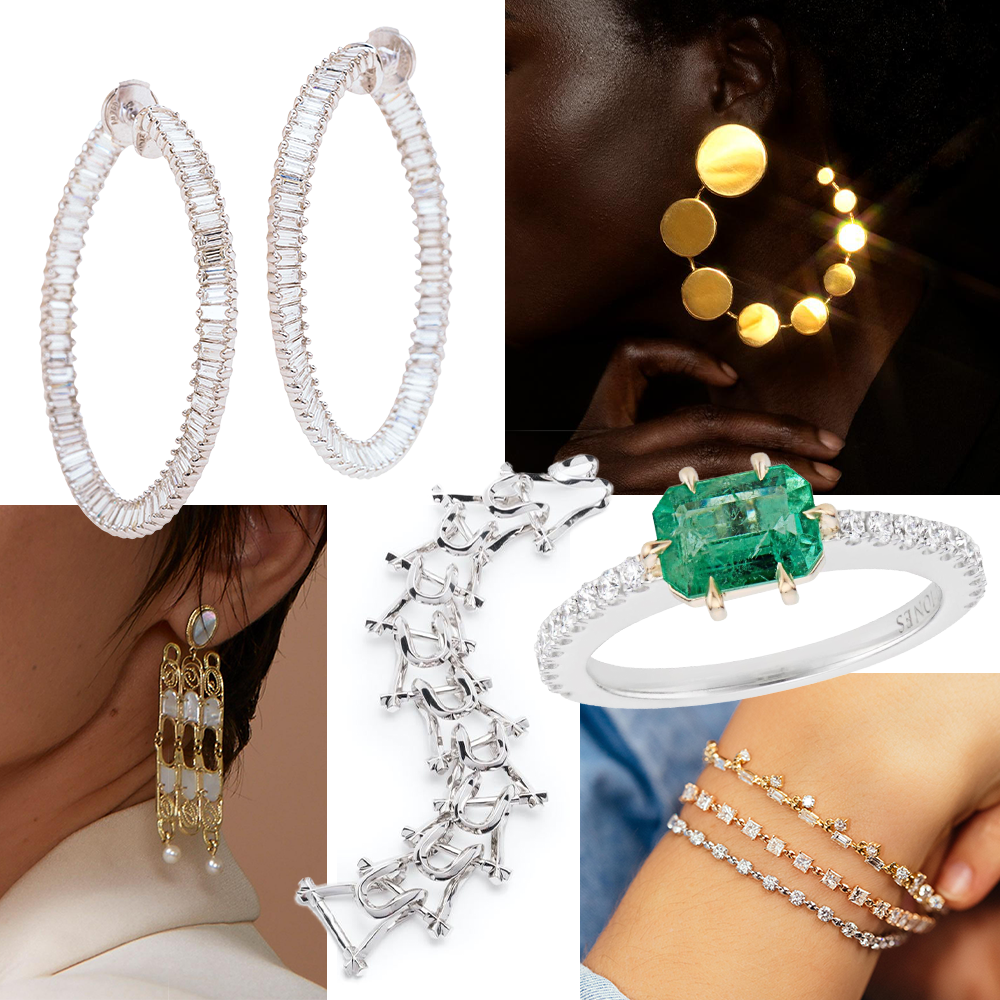 They’re some of the freshest voices in this year’s Here We Are Marketplace.

November 14, 2021Jewelry aficionados have come to know 1stDibs as a top destination for signed vintage pieces, but the site also features a wide array of 21st-century designs that feed the discerning collector’s appetite for what’s new, now and next. For the third year in a row, 1stDibs is partnering with New York City Jewelry Week (NYCJW) on a marketplace filled with jewels by 43 emerging talents. The platform is an important arm of  NYCJW’s Here We Are initiative, which offers professional development, mentorship and year-round programming to a diverse group of U.S. jewelers. The NYCJW’s goal is to introduce the work of this group of designers to a larger audience while addressing the widespread inequality and lack of representation in the jewelry industry at large.

“There is truly something uniquely special about what the Here We Are designers bring to the industry and this world through jewelry,” says Elliot Carlyle, NYCJW’s director of cultural diversity and inclusion. “We honor them for taking up space and filling it with their voices, their creativity and their presence. NYCJW as a whole exists as a platform of discovery. I hope everyone will be inspired to discover, experience and even buy into the jewelry legacies of all our designers.”

The NYC Jewelry Week Here We Are MarketPlace will be shoppable through the end of February 2022. Below, we showcase the designers behind four standout lines, all based in New York City, who are making their presence known through elevated concepts and unique perspectives.

After a successful career in the fashion industry, Brooklyn-based designer Malyia McNaughton debuted Made by Malyia in 2013, with a focus on body chains. Since then, she has positioned her collection in the world of fine jewelry made with gold and diamonds — and she’s flourishing there with designs that reference geometric and organic forms, moon phases and Egyptian and African culture and artifacts. Over the past year, she has achieved an elite status with jewelry collectors, tastemakers and the press largely through her partnership with the Natural Diamond Council (NDC). She was selected as a member of the high-profile NDC x Lorraine Schwartz Emerging Designer Diamond Initiative and was also commissioned by the NDC to develop an 11-piece diamond collection for a global ad campaign starring actress Ana de Armas. These honors, says McNaughton, “have challenged me as a designer and pushed me in the best way.”

McNaughton’s Progression hoop — oversize and dotted with graduated discs, creating a kind of solar system along the curve of the ear — has become her signature piece. “I wanted to reimagine the classic hoop by creating something familiar yet unexpected that could easily be identified as my own,” the designer says. “It’s also a staple in my own jewelry wardrobe.” She is currently at work on a new series inspired by the four elements — earth, air, fire and water — and says that more brand collaborations are on the horizon. “I really enjoy when people who encounter my collection for the first time point out a piece and say, ‘I have never seen anything like that before.’ I love that reaction, and I want to evoke more of those reactions through my work.”

An intriguing mix of cultural influences distinguishes the work of Sumer Sayan, who is of Kurdish heritage, was born in Turkey and migrated to Sydney, Australia, as a child. He studied jewelry design and metalsmithing in both Istanbul and Sydney, where he apprenticed with master jewelers before starting his own label, Harlin Jones, in 2014. Since 2019, his home base has been Brooklyn. “All these amazing countries play a huge role in my work today,” says Sayan. “In a city like Istanbul, it’s hard not to get saturated with inspiration from its beautiful architecture. Australia is where I had the opportunity to work alongside some amazing jewelers from all over the world to learn the craft in a masterful way. And New York City is the place I dreamt of coming to as a youngster, as all the things I grew up loving and was inspired by seemed to come out of this city, from street art to musical icons to the fashion industry.”

The name Harlin Jones is meant to conjure a rock-star alter ego and the aesthetic that implies: edgy and luxe. That’s the reigning vibe of Sayan’s men’s collection, which counts among its fans Keith Urban. The women’s collection, meanwhile, “is more highly polished, high-end work using precious gemstones,” he explains. “But in a way, they both seem to have a certain edginess about them.” Case in point: the spiky ice-pick motifs of the alternative engagement ring, in which claw-like prongs grip a small but mighty emerald. There’s a quiet mysticism, too, to pieces like his popular bird necklace, which references, in stylized form, the eagle, revered in Native American culture as a symbol of love, friendship, honor, bravery and sentient powers. Sayan cites Navajo jewelry traditions as another important influence on his work. “Turquoise is my favorite stone, and in my opinion, no culture used this beautiful and mystical stone like the Native Americans,” he says. “The Navajos would store turquoise in baskets or hang it from the ceiling in order to protect the family from evil, which is very similar to the culture I grew up in, where we’d have evil-eye beads up everywhere for the same reason. The incredibly gifted Navajo artists Raymond and Lee Yazzie have made me look at turquoise and other gemstones in a totally different light.”

It’s only been a year or so since Brigid McNellis founded her jewelry line, Mon Pilar. But where many newcomers struggle with establishing a cohesive aesthetic, her sensibility is already clearly defined — and always expressed in the warmth of gold. Drawing on the craft traditions of Spain and Italy, where she has studied and practiced fine jewelry making, the Brooklyn-based Chilean-American takes her design inspiration mainly from Byzantine jewels and Etruscan filigree wirework.  “The boldness and decorative elements used in Byzantine jewelry and the symbolic status that was assigned to certain gemstones are really intriguing to me,” she says. “As for filigree, it’s a technique I learned in Florence and fell in love with immediately. It allows me to create large jewels that are light in weight, perfect when I want to go big on a jewelry design.”

As richly detailed as her pieces are, with their use of filigree and granulation, they are not dainty, delivering a bold presence on the ear, neck or hand. The overall look is robust and substantial. In her Milano earrings, she has added an organic element to the textural mix: a swath of vintage anaconda skin she purchased from a leather merchant in Florence. The pieces also dangle a handful of multicolored pearls, a gem McNellis uses often in her designs — “both for its beauty and historical richness,” she says. “I like to make my jewelry ornate but not over-the-top. I’m attracted to details and to simple clean surfaces and lines. I have a restrained approach that allows the piece to look and feel modern.”

Founded in 2013, the New York City–based Third Crown is helmed by husband-and-wife team Kristin and Kofi Essel, who combine Kristin’s jewelry design background (David Yurman, Reed Krakoff and Eddie Borgo) with Kofi’s experience as a designer of contemporary menswear. With its bold sculptural motifs referencing architectural and geometric shapes, beveled edges and sharp angles executed in lustrous polished brass, the collection presents a harmonious balance of proportion, line and form. “We are pretty aligned when it comes to aesthetics, honestly,” says Kristin. “We always try to stay connected to Third Crown’s clean, bold look. However, Kofi always wants to go bigger as far as size and boldness.” The duo’s first collection, Arc, inspired by the Arc de Triomphe in Paris and worn by the likes of Beyoncé and Solange Knowles, is the definitive expression of their aesthetic. Its most recent manifestation, meanwhile, is the Marcy line. “The collection was originally called the ‘melting arc’ collection because we took the arc shape and distorted it,” says Kristin. Adds Kofi, “Marcy is the best representation of both of us working as one. We also both wear a good majority of the Marcy pieces on a daily basis, from the studs to the link bracelet.”

Given how metal-forward Third Crown’s sensibility is, it may come as a surprise that it launched with a line of rosary-bead necklaces. The collection, a subtle nod to the couple’s respective Jamaican and Ghanaian roots, started with a strand of lapis rosary beads Kristin made for Kofi one Christmas. The designers plan to return to that reference point in the coming months as they start to think about new concepts. “We are really excited about reintroducing gemstones into our collections,” says Kristin. 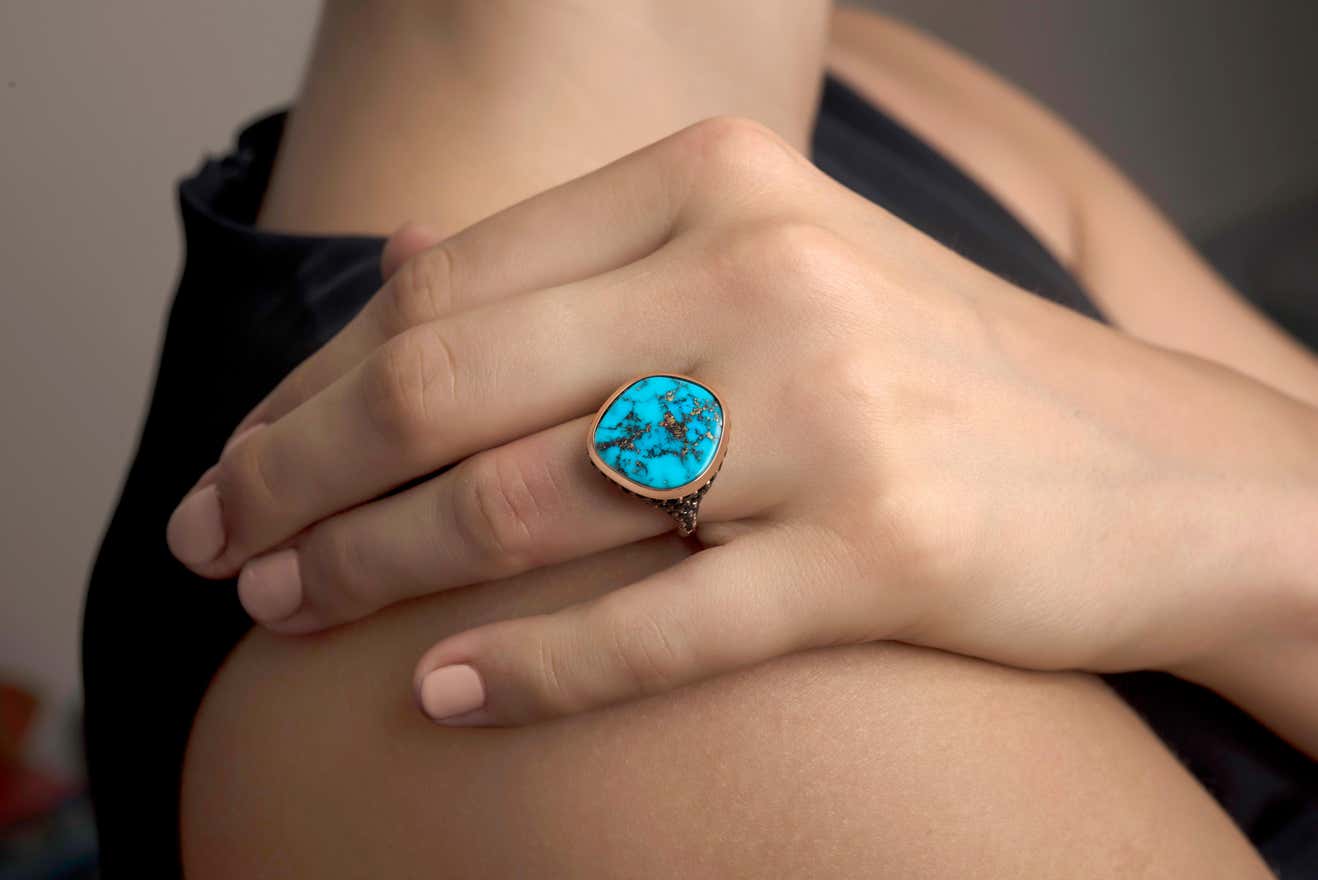 Discover NYC Jewelry Week's Here We Are Marketplace
Shop All