The L.A. Designer with a Star-Studded Client List Shared His Style Secrets 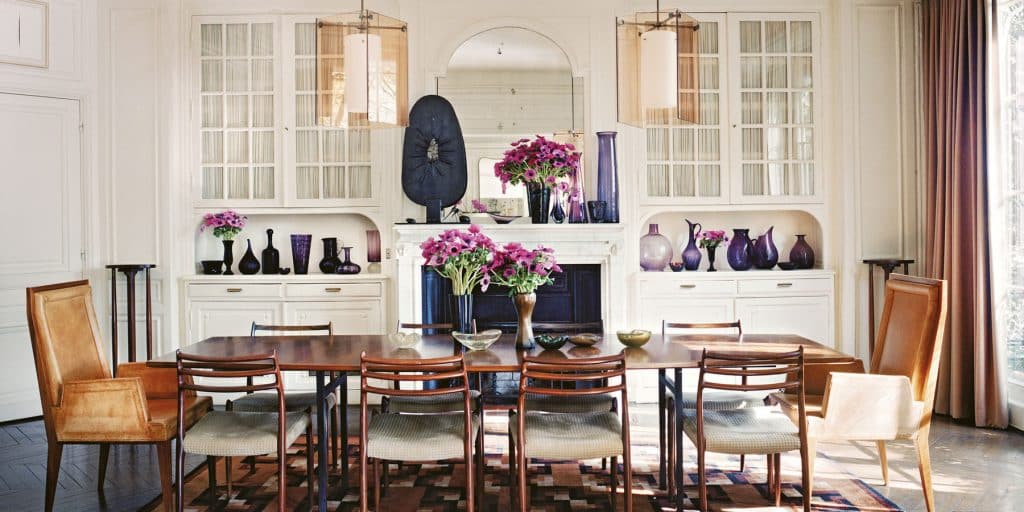 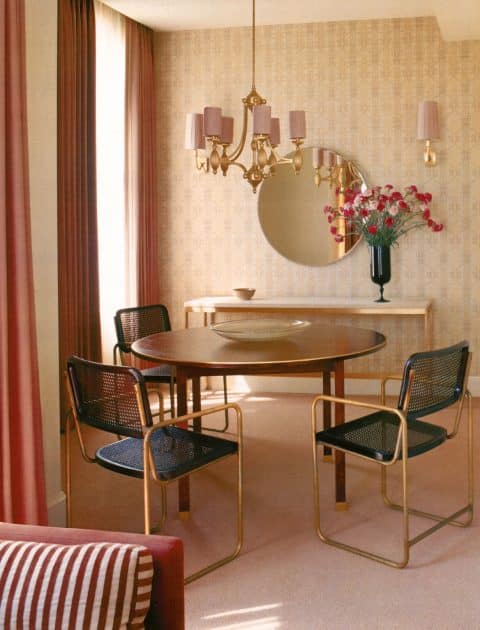 October 28, 2018Paul Fortune overhauled the interiors of the Sunset Tower Hotel, including the one shown above, in 2005. He also updated the Tower Bar, insisting on a new lighting design that, he writes, “flattering to all, became so renowned that it was even mentioned in a Vanity Fair editorial,” crediting it with the success of their annual Oscar party (photo by Tim Street-Porter). Top: Fortune designed this Paris home’s dining room, which is included in his new book, Notes on Décor, Etc. (photo by François Halard).

Anyone who opens Paul Fortune’s new book, Notes on Décor, Etc. (Rizzoli), thinking it will be another ode to the luxe life is in for a surprise. The British-born designer arrived in Los Angeles in 1978 and swiftly segued from creating album covers and sets for music videos to crafting interiors for boldface names, who came to include Marc Jacobs, Sofia Coppola, Aileen Getty and Dasha Zhukova. He was the designer of and a partner, with Michèle Lamy, in the ’40s-noir Hollywood hot spot Les Deux Café; he designed the elegantly understated interiors of the Sunset Tower Hotel, including the famed Tower Bar, in 2005; and it was his idea to put a 1959 Cadillac on the roof of the Hard Rock Café at the Beverly Center.

Fortune is thus particularly well placed to cast a critical eye on his trade, and he pulls no punches in expressing his opinions. The explosion of interest in design, he writes, has pushed authenticity into the shadows, and our obsession with lifestyle has spawned what he calls “Nightmare-on-West-Elm-Street disease.” But even before the rise of design as a social-media juggernaut, Fortune, in a 1997 interview in the Los Angeles Times Magazine, declared that his job as a designer was “quality control,” adding, “We must stop the reversion to the lowest common denominator.”

In the volume, which Fortune conceived as a kind of note- or scrapbook, he lists his pet peeves. These include “look at me” rooms filled with the art du jour; spotlights; noisy, trendy restaurants and those that don’t use white tablecloths; scented candles made of paraffin instead of beeswax; being told what to do, a reaction, in part, against his Jesuit education. (Among his likes are bedrooms with views and wood-burning fireplaces, an armchair near the bathtub for visitors, a well-appointed drinks tray and Henry Dreyfuss’s classic 2500 Touch Tone phone. “I love a landline and always will,” he says.) 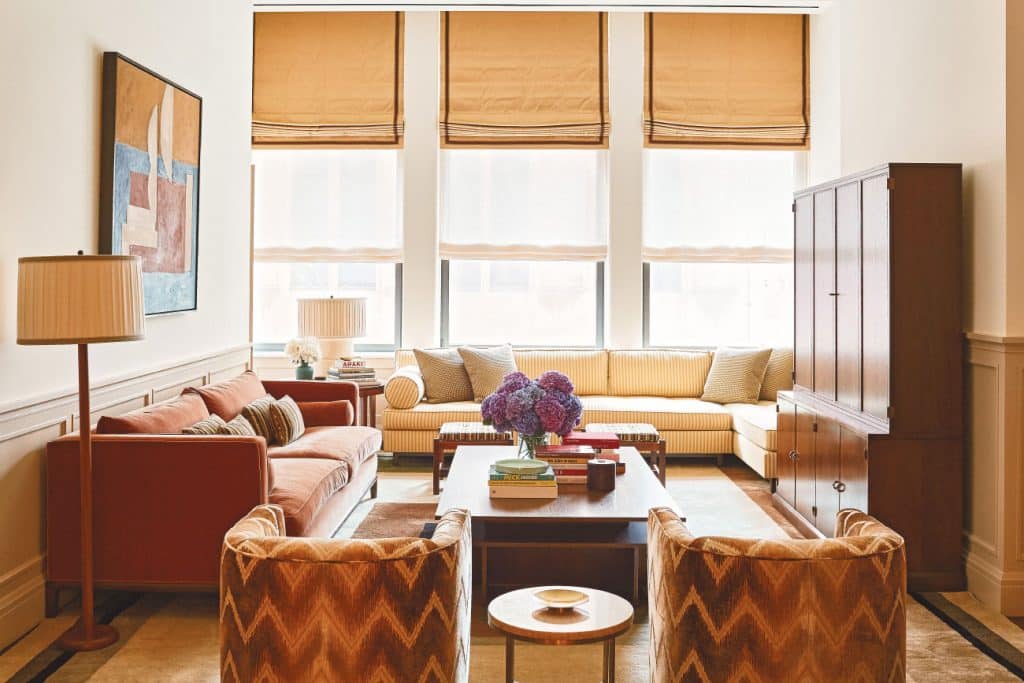 “A successful space encourages us to be together and enjoy each other and the many elements of décor, art and nature it comprises,” Fortune writes in Notes on Décor, Etc. (Rizzoli). This Lower Manhattan living room, shown in the book, illustrates the pleasurable synergy he describes. Photo by William Abranowicz 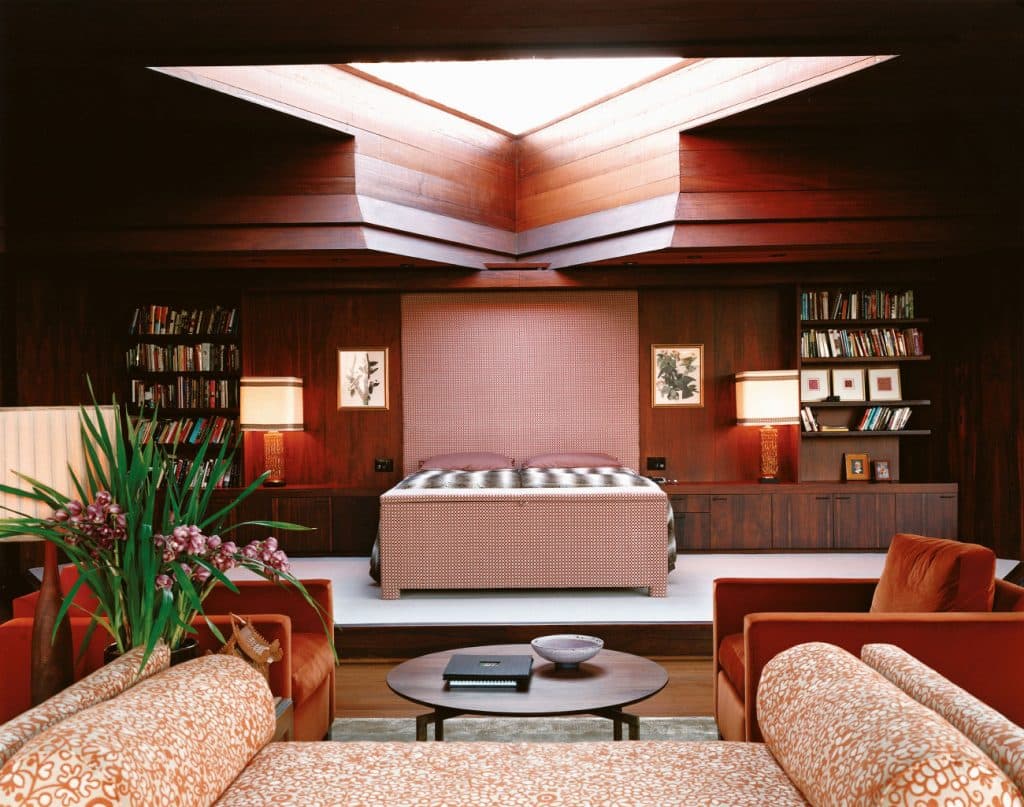 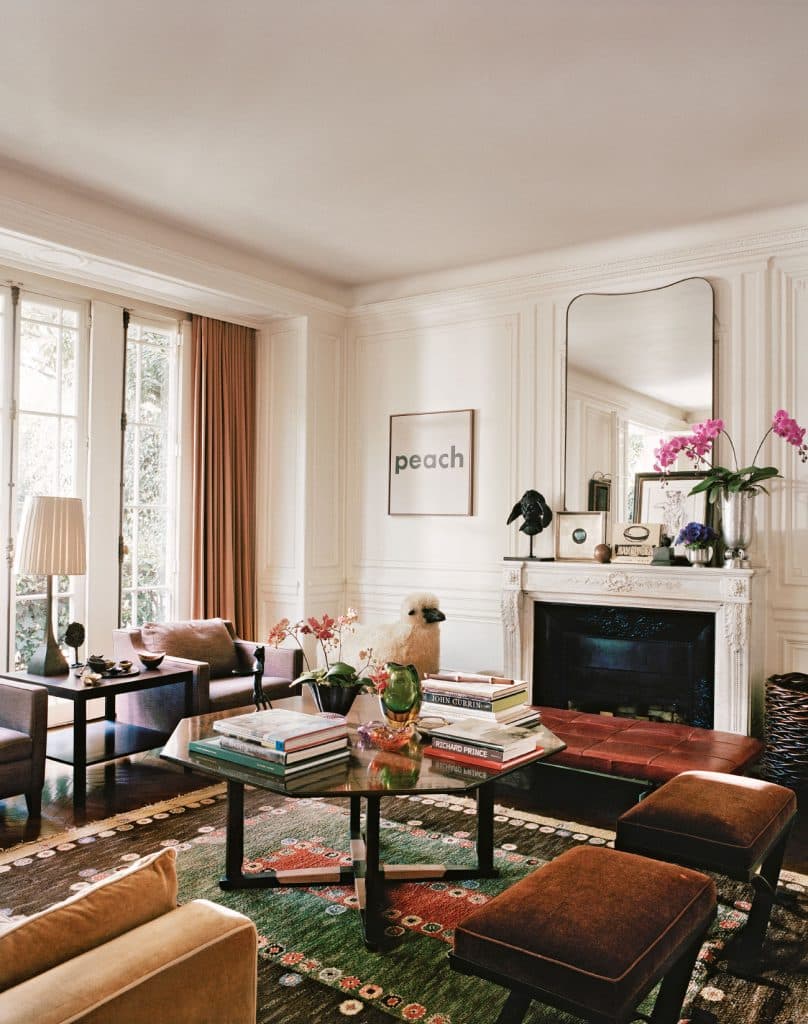 “I have a strong affinity to rugs,” writes Fortune, who outfitted this Paris living room with a colorful floor covering. “In all my projects I’ve paid special attention to them. A project can be truly elevated by the right choices. Where rugs are concerned the conventional wisdom suggests that it is the first thing to choose when designing a room. More often than not in my own experience, it’s been the last.” Photo by François Halard 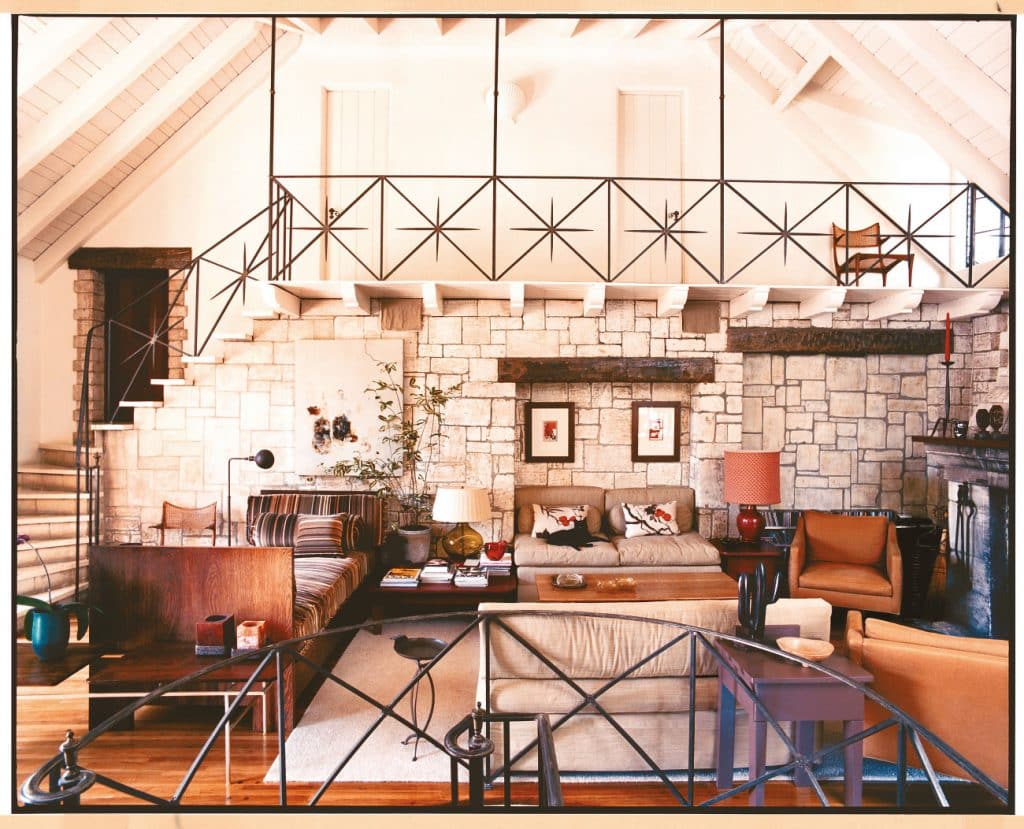 Fortune lived for 35 years in the house in Laurel Canyon shown here in a 1995 photograph. Photo by Oberto Gili 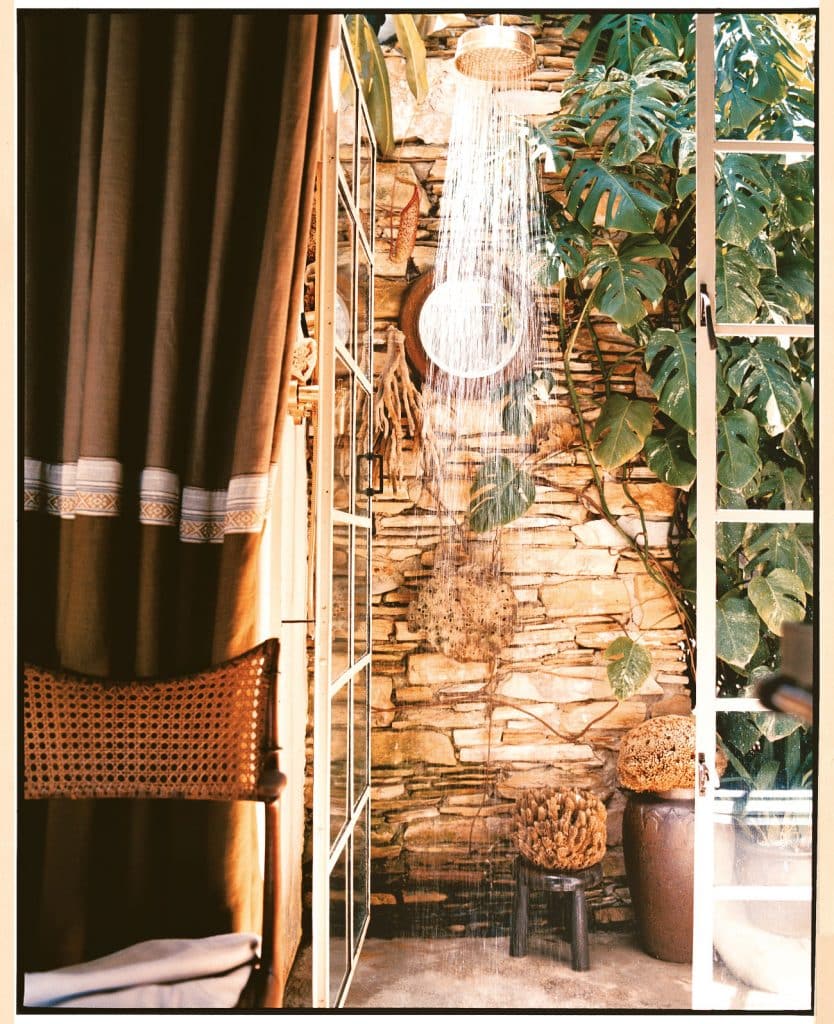 Describing the Laurel Canyon residence’s master bathroom, Fortune writes: “I was able to create an outdoor shower in the corner using the stone chimney of the bedroom as a wall. It was glorious to shower en plein air. People were concerned that I would catch a cold . . . I never did.” Photo by Oberto Gili 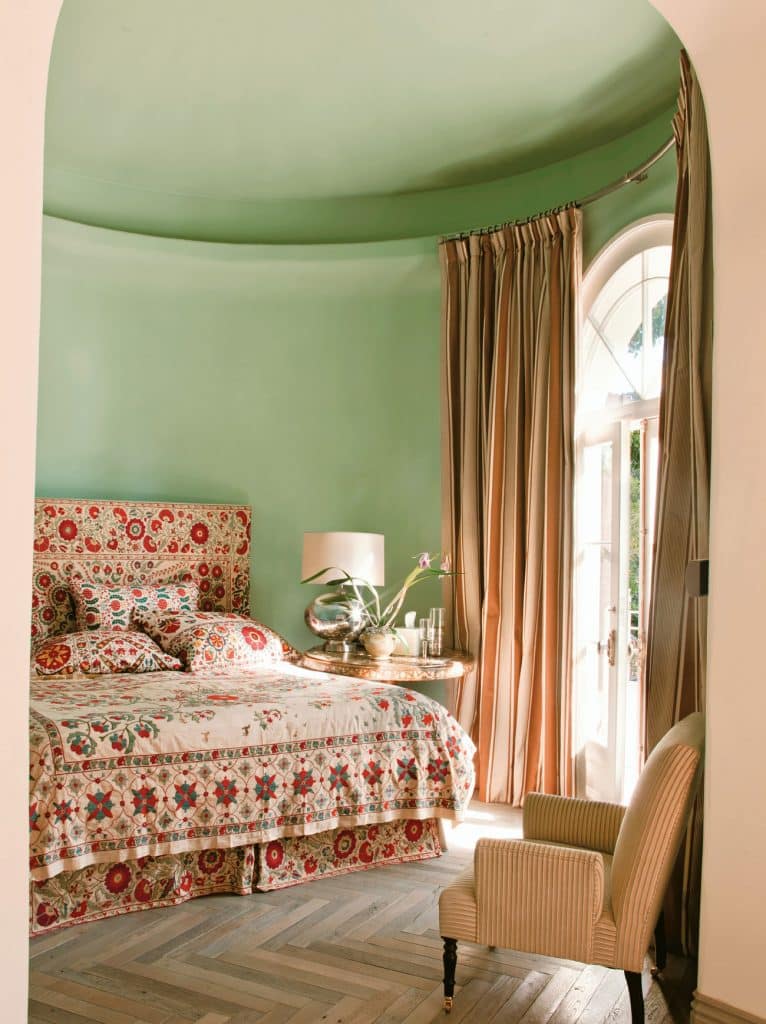 “I’ve often had bedrooms with a view and now find this essential,” writes Fortune, who designed this Mulholland Drive home. “Mountain, ocean, or city views amaze, but even if it’s just the sky you see it’s a constant revelation to watch the light change, the moon rise, or a storm advance all the while cozily ensconced in your bed.” Photo courtesy of Paul Fortune 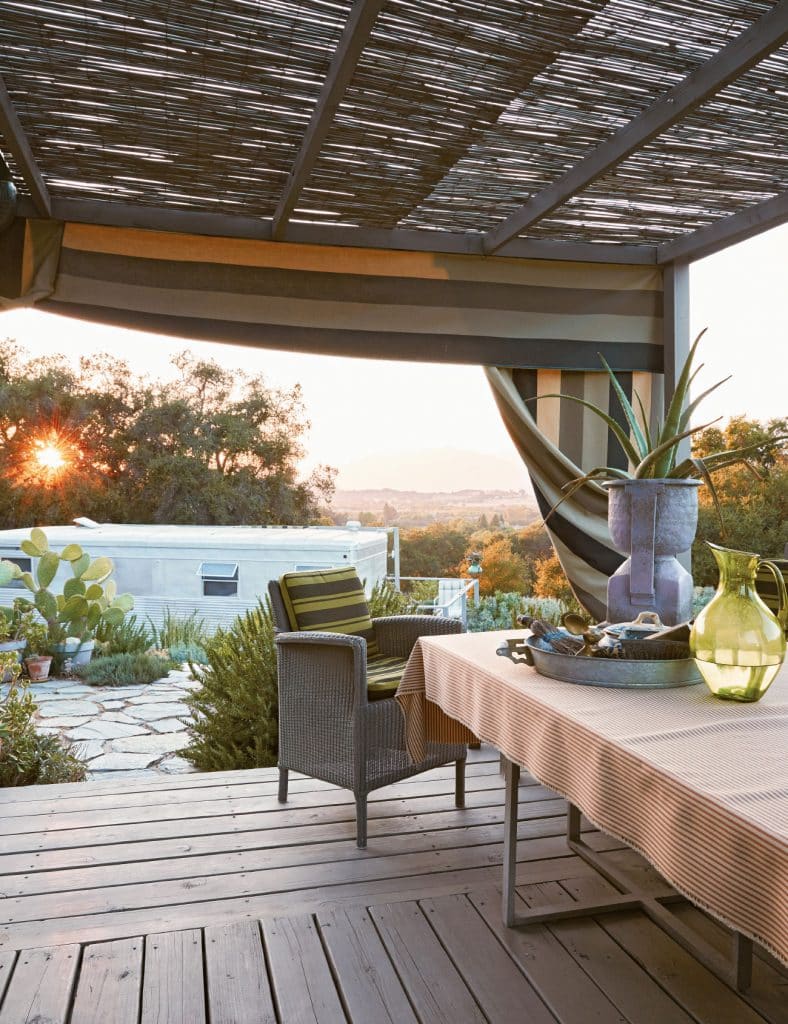 Fortune and his partner, Chris Brock, have equipped their home in Ojai, California, with a “guest house” that is, in fact, a Spartan trailer. With its wood-paneled interior, the designer states, it has “the same spirit as the old boat-room in Hollywood where many an amusing night was spent by our guests.” Photo by William Abranowicz 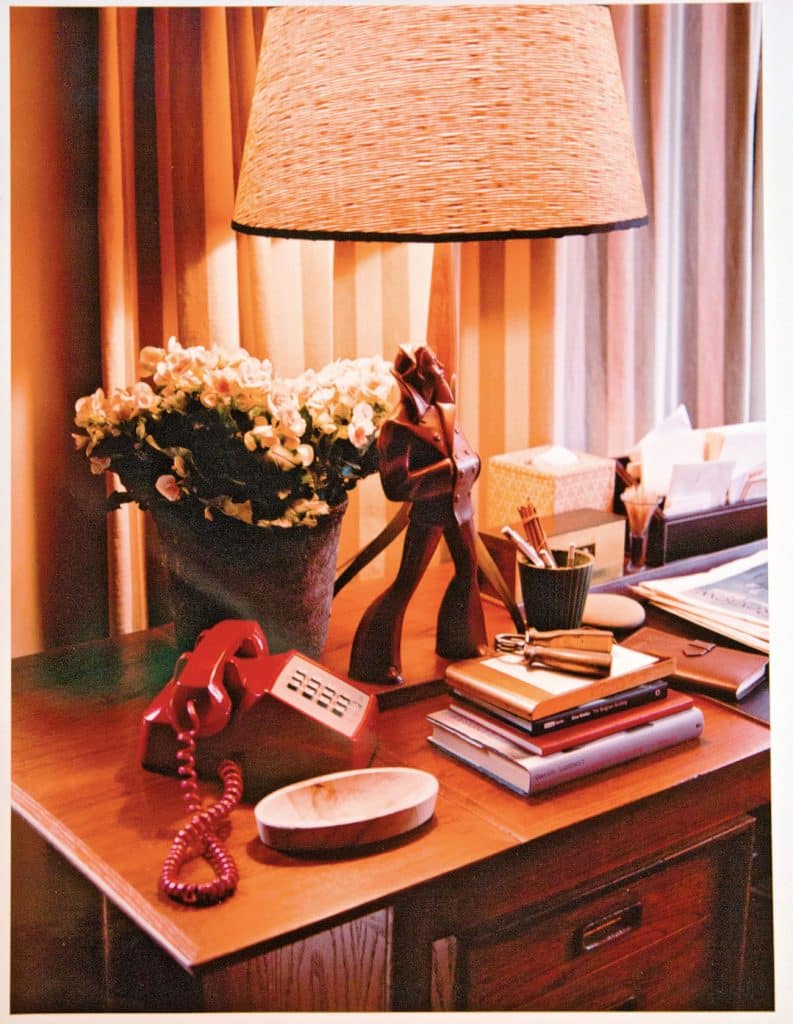 This 1998 photo of a desk in Fortune’s Laurel Canyon home shows the designer’s beloved landline phones. “They will have to wrench the handset of my favorite Dreyfuss-designed phone from my frantic desperate clutch!” he writes. “The #2500 Touch Tone version designed in 1967 had never been bettered ergonomically.But it was the end of the line for this stylish masterpiece of American industrial design.” Photo courtesy of Paul Fortune

His occasional curmudgeonly pronouncements, however, are those of an idealist rather than a snob. Fortune genuinely aspires to create the backdrop for a life well lived. “Interiors should be comfortable and reveal themselves slowly and sensually,” he writes, adding that “a successful room has layers that have been applied over years.”

These interiors, whether in a glamorous art-filled Greenwich Village townhouse or the architecturally dramatic 1970s home that once served as bachelor pad of basketball legend — and legendary bachelor — Wilt Chamberlain (the book does not identify any of the designer’s clients), are all about authenticity. Fortune’s aesthetic is 20th-century modern, but it welcomes Art Deco and the archetypally plain furniture of the contemporary artist/designer Roy McMakin. Fortune’s palette is consistently neutral but never bland; he favors warm woods, sensuously textured fabrics and patterned carpets. The last are often rare examples from the likes of C.F.A. Voysey and Märta Måås-Fjetterström, which he has a talent for hunting down. Perhaps the best known of all Fortune’s projects is the house in Laurel Canyon where he lived for 35 years before selling it in 2013. With its double-height stone-walled living room, beamed ceilings and wrought-iron mezzanine balustrade, cozy master bedroom (with its own fireplace, of course) and French doors opening from the master bathroom to an outdoor shower, it came to epitomize a casual, rather Bohemian version of the good life in Southern California. 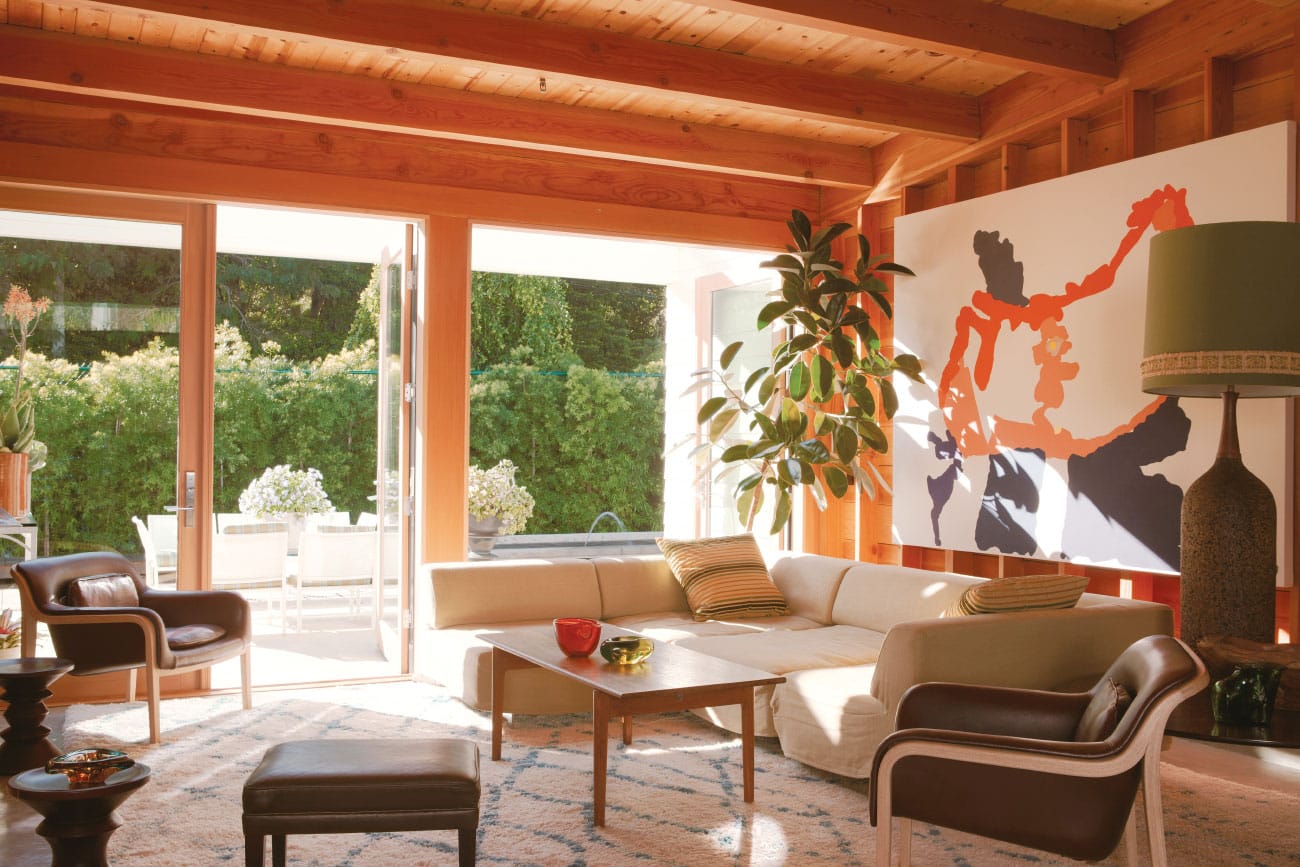 Fortune created the interiors of the Carpinteria, California, house of photographer Dewey Nicks and his family, which was designed by architect Barbara Bestor. Photo by William Abranowicz 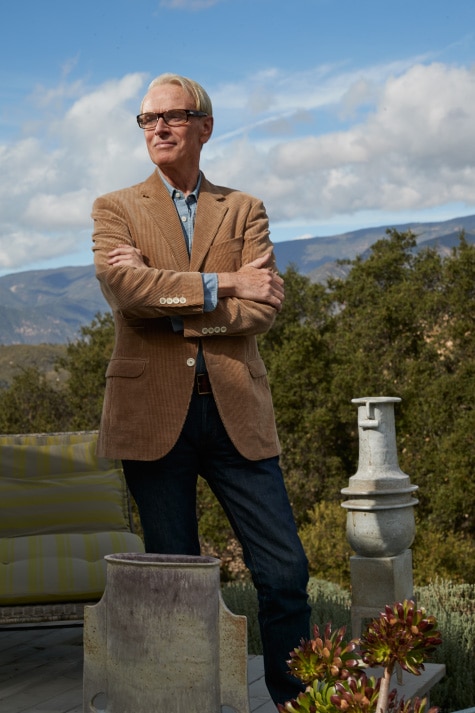 It was a vision, according to Fortune, that was well within reach when he moved west. “You could rent a house in the hills for $300 a month. Drinks were $2.50. The sun shone more than I knew was possible. . . . Ella Fitzgerald was at the dry cleaners picking up her dress while her driver took a smoke in the lot,” he recalls in the book, adding, “I met many of my heroes: Ed Ruscha, Joni Mitchell, Fred Astaire, Gore Vidal. Everyone was more accessible in the age before social media, believe it or not. People were less guarded.”

These days, Fortune lives about 90 minutes north of Los Angeles, in Ojai, where he shares a comfortable bungalow with his husband, Chris Brock. Their guest house is a vintage Spartan trailer to which Fortune added a pine interior — “People never want to leave,” he said in a recent interview — and they drive around in a 1967 Rolls-Royce. Fortune maintains an office and an apartment in L.A. and likes to go to the opera there. But he says “the potential of L.A. was different” when he first arrived: “The postwar cultural scene gave it an amazing aura. I arrived at the very end of that. I’d go to Rita Hayworth’s house with Christopher Isherwood. Now,” he adds with characteristic acerbity, “it’s traffic and boring people.”

Fortune’s current projects include a Manhattan townhouse for Coppola and two apartments in L.A. for the billionaire philanthropist and art collector Nicolas Berggruen. He continues to work in the style that he describes as “post-design,” stating that “I never had a ‘look.’ I like the idea of each new problem being resolved in a new way, and I want my projects to last a hundred years.” 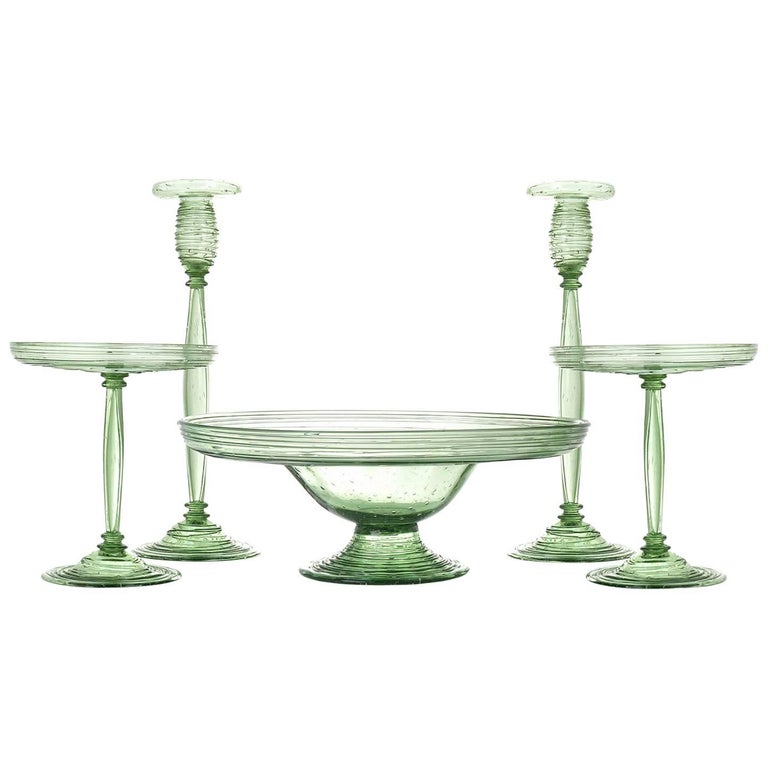 “The color and formality of these pieces are a bonus to any dinner table, kitchen shelf or even a bathroom.” 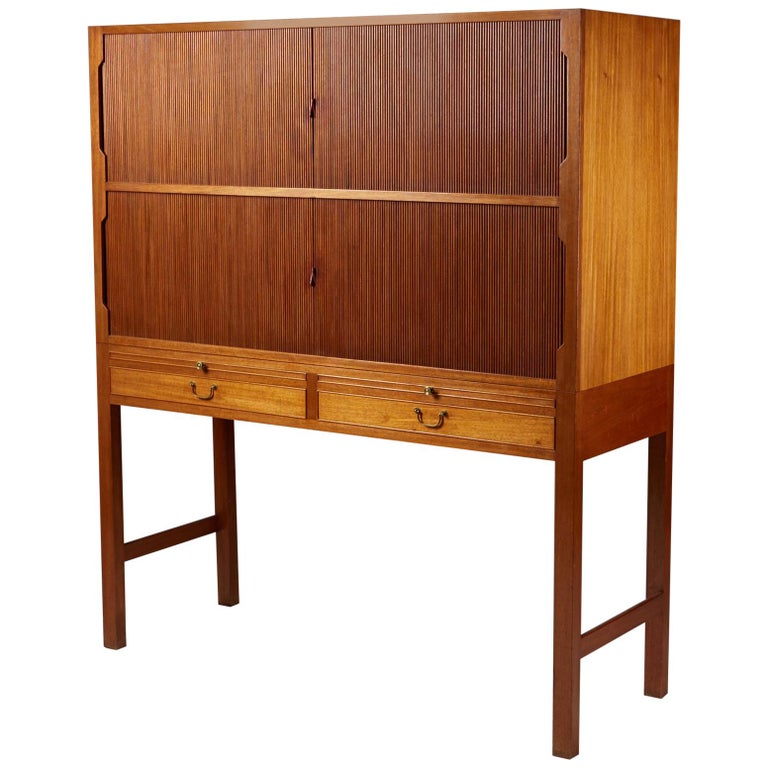 “Cabinets have such presence and give a room identity. Built-ins are boring.” 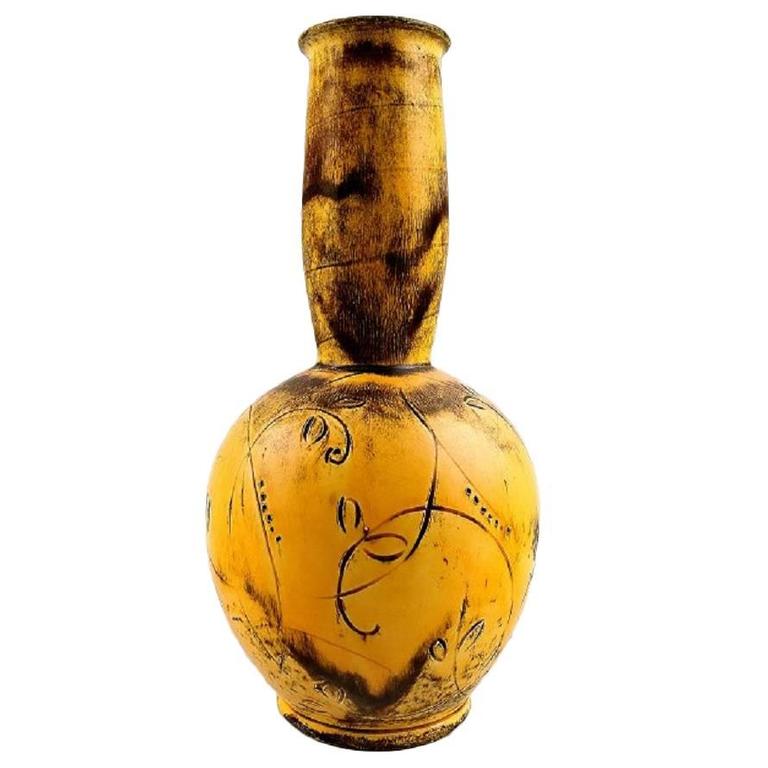 “I’m a fan of Kähler glazes and forms. They work everywhere and have subtle elegance.” 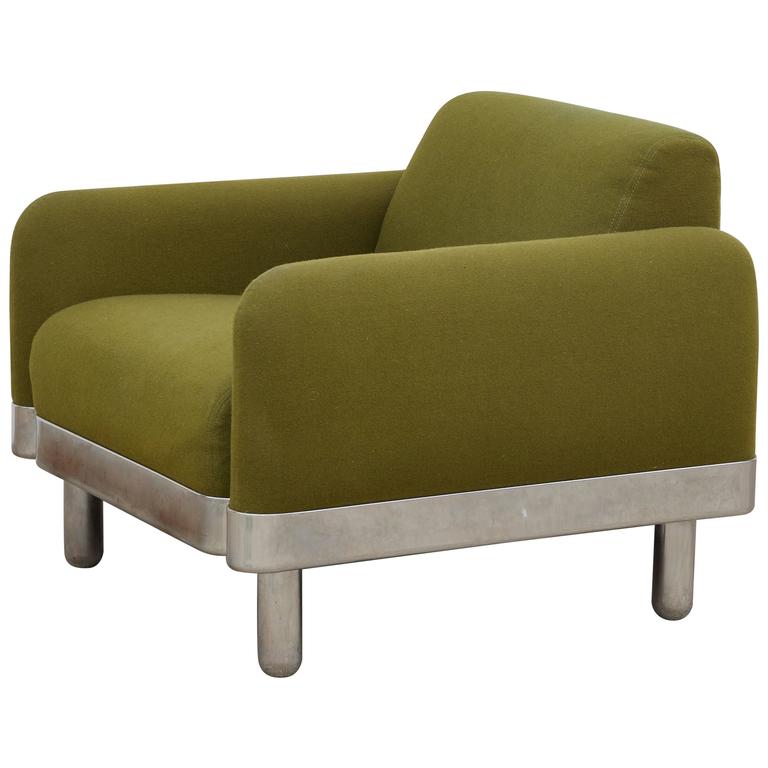 “I love this chair — is it Deco or sixties or now? Cardin made some questionable things in general but had some winners.” 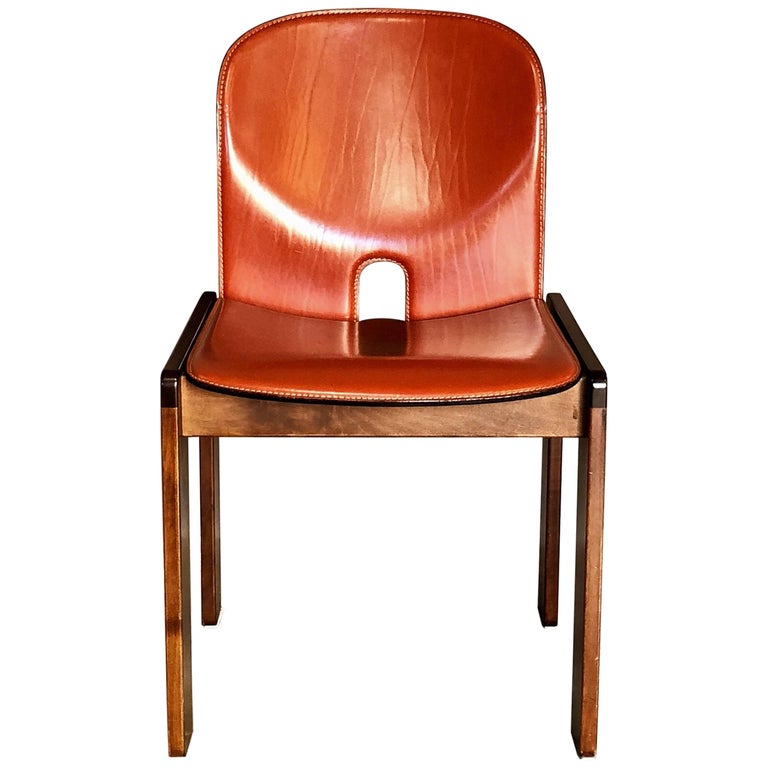 “This stylish chair is very comfortable and has great lines. The armchair version is even better.” 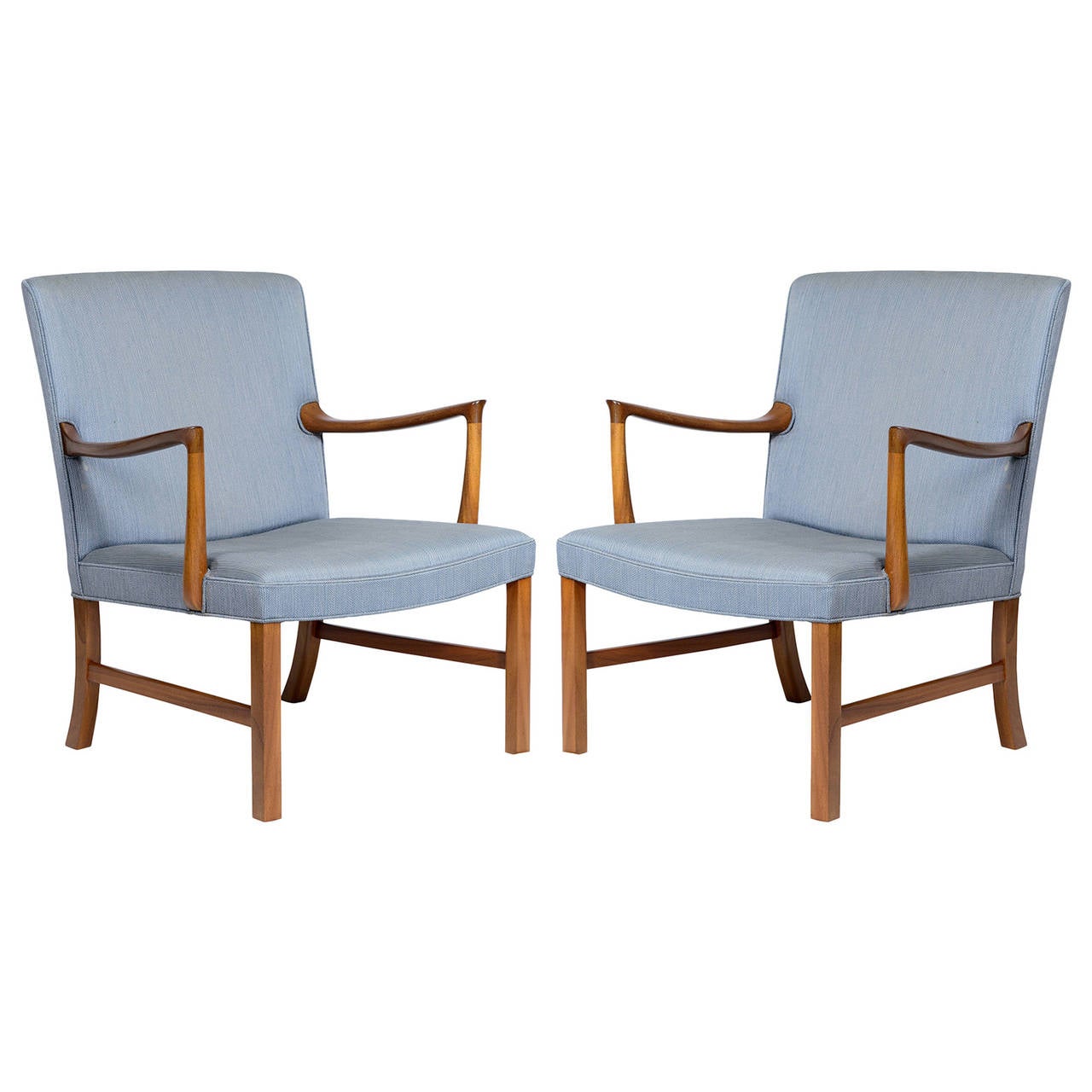 “This is a comfortable chair for an office, dining room or hallway. The blue horsehair upholstery lends extravagance.” 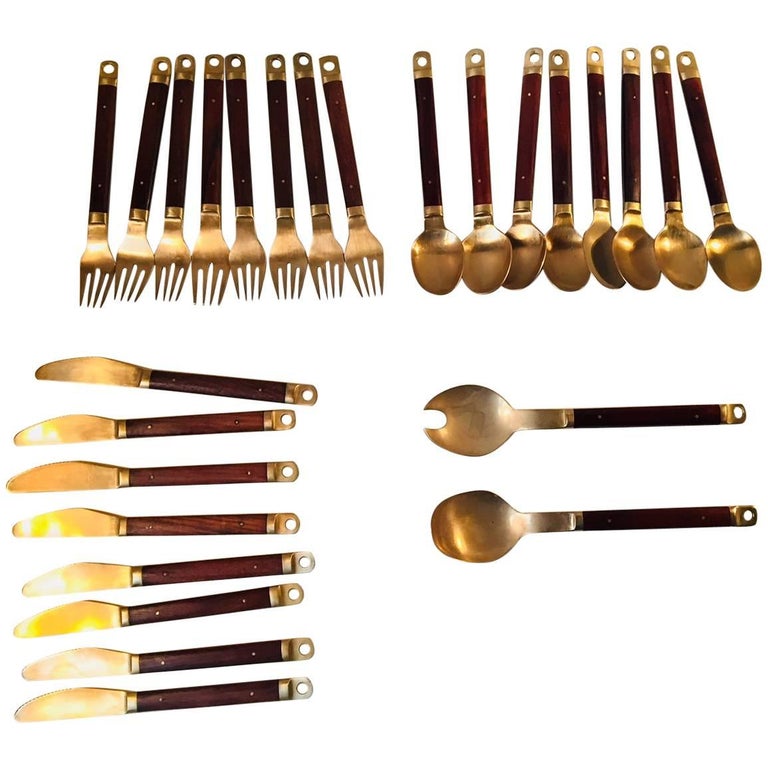 “Not dishwasher safe, but worth the extra care” 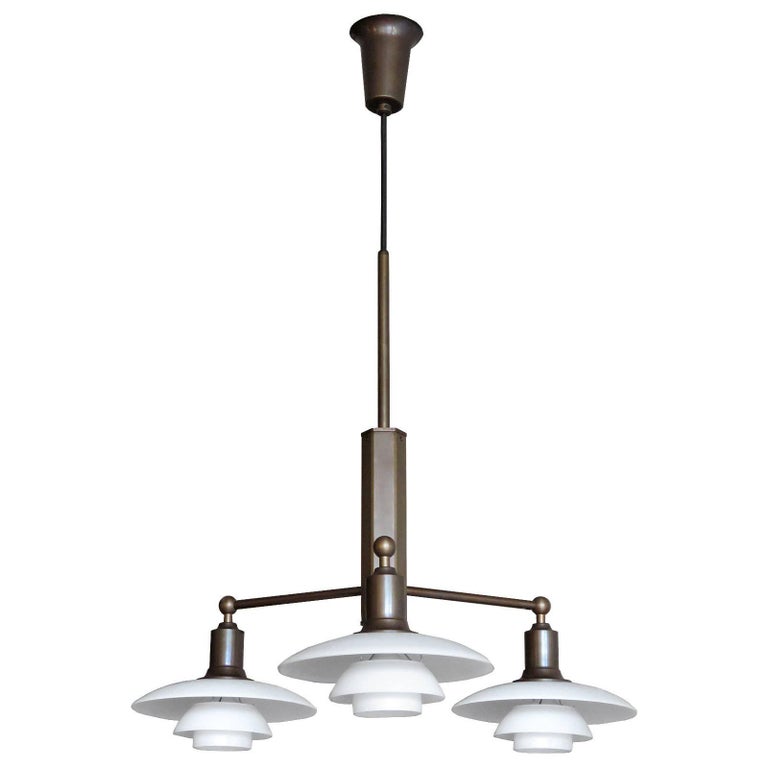 “It’s the perfect light for a kitchen island — I use two! It’s amusing to use something unexpected.”