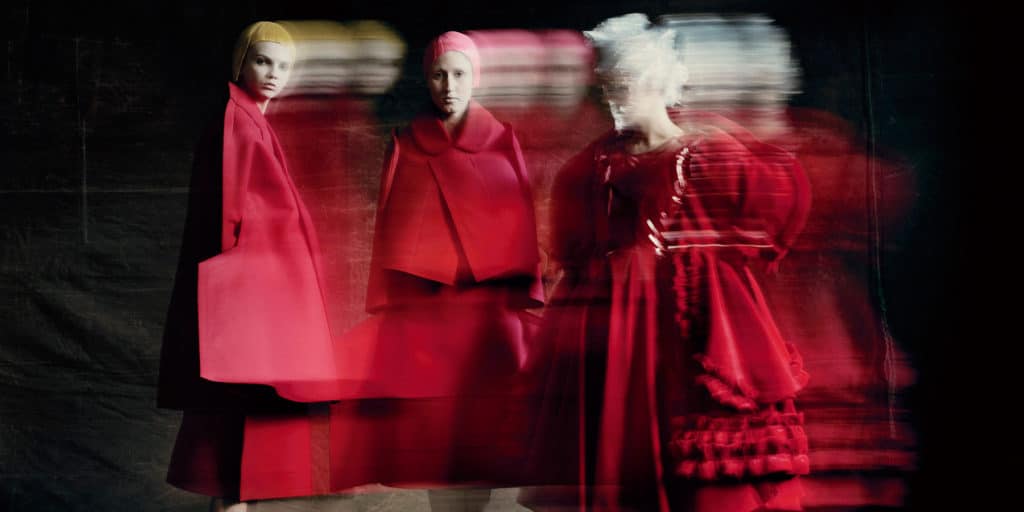 The visionary Comme des Garçons designer’s work is not at all conventional, and neither is the exhibition. 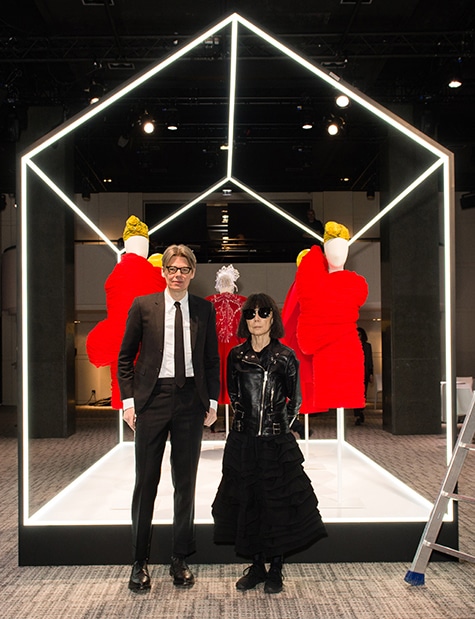 May 29, 2017Andrew Bolton, curator of the Met’s Costume Institute, with Rei Kawakubo, of Comme des Garçons, at a press event in Paris on March 6. Kawakubo is only the second living designer to be the subject of an exhibit like this at the museum, and she wanted it to be collaborative (courtesy of The Metropolitan Museum of Art/BFA.com). Top: Three looks from her Body Meets Dress, Dress Meets Body Spring/Summer 1997 collection. Photograph by © Paolo Roversi, courtesy of The Metropolitan Museum of Art

I want to rethink the body so the body and the dress become one.” So said Rei Kawakubo, referring to her 1997 Body Meets Dress, Dress Meets Body collection, key pieces from which are currently on display in “Rei Kawakubo/Comme des Garçons: Art of the In-Between,” the mind-bending new exhibition at the Costume Institute of New York’s Metropolitan Museum of Art through September 4. If you’re not already a fan of the inventive 74-year-old Kawakubo and Comme des Garçons (CDG), her Tokyo-based atelier, you might stroll into the Met thinking a dress is just a dress — one hole for the head, one for each arm, and so on — and its primary goal is to flatter the wearer. This show will have you thinking differently. Indeed, you will most certainly stagger out of the museum realizing that a dress can be anything Kawakubo wants it to be: a sculptural circle, an architectural construct, a bulbous alien — anything but the expected, as she deforms and re-forms the garment and our expectations. For Kawakubo, the body is a mere support, an easel that holds the canvas on which she exercises her formidable creative energy in a perpetual quest to invent a brave new world using fabric, or its equivalent, as her brushstroke. As Caroline Evans writes in Fashion at the Edge, her 2003 analysis of 1990s experimental fashion makers, “The best way to regard Comme’s designs is as an exploration, an early foray into space.”

This exhibition is curator Andrew Bolton’s first foray into the archives of a living fashion designer, and only the Costume Institute’s second. The first, in 1983, spotlighted Yves Saint Laurent. The success of that show was pivotal in convincing people that fashion could be worthy of inclusion in a museum collection. Genius comes in many forms, thankfully, and there could be no better illustrations of the delicious appeal of vive la différence than Saint Laurent’s more conventional French chic and Kawakubo’s radical Japanese iconoclasm. The year before the Saint Laurent Met exhibition, in 1982, he showed an opulent India-inspired collection of colorful silks while Kawakubo presented the aptly named Destroy collection, her second in Paris. As Judith Thurman describes the scene in her 2005 New Yorker article on Kawakubo, “it was modelled by a cadre of disheveled vestals in livid war paint who stomped down the catwalk to the beating of a drum, wearing the bleak and ragged uniforms of a new order.” In other words, not Catherine Deneuve but more Michael Jackson, whose Thriller album was released that year.

“The right half of my brain likes tradition and history. The left wants to break the rules.” 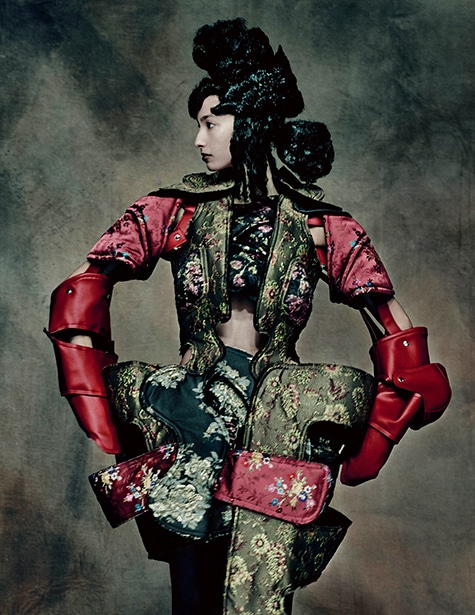 Bolton determinedly chased down an infamous piece from that 1982 collection, a sweater formed as much of large torn holes as of black wool knit, to include among the exhibition’s 140 designs, drawn from CDG’s nearly-five-decade-spanning archive. When Kawakubo approached Bolton about the exhibition, “she did not want a traditional retrospective” he told me, standing in a futuristic womb-like gallery, its white walls setting off the stark, predominantly red, black and white clothing of the mannequins. “But she was concerned about her legacy, and it was important to her to be around to collaborate.” Kawakubo worked with the Met’s design team to create an innovative scheme: Rather than the traditional hushed lighting in dim galleries, used to preserve delicate fabrics, a democratic glow is conferred by un-precious fluorescent tubes that crosshatch the ceiling. Instead of being presented with hard-to-read display labels and explanatory wall texts, each visitor is handed a utilitarian notepaper guide with quotes and notes that illuminate Bolton’s thesis about Kawakubo’s “revolutionary experiments in ‘in-betweenness’ — the space between boundaries.” Follow the numbers, if you wish, or follow your instincts. Stay safe, or explore, like Kawakubo. Clothing is shown within curvilinear cavities, glass cages or — gulp! — alongside bowed walls, unprotected from desecrating human hands!

Bolton has curated the finest examples from the outer limits of Kawakubo’s creativity, but not all her clothes belong to the “rarefied world of art for art’s sake,” as Deyan Sudjic points out in his 1990 monograph Rei Kawakubo and Comme des Garçons, discerning “a shrewd business intelligence” behind the label she founded in 1969. Alongside her husband and business partner, Adrian Joffe, she presides today over some 130 stores worldwide. In addition, she established the avant-garde emporium Dover Street Market (with locales in London, New York, Tokyo and Singapore), has developed subsidiary easier-to-wear lines like Play, and was an early exponent of limited-edition collaborations with a who’s who of preeminent artists (including Willem de Kooning, Peter Blake), photographers (Cindy Sherman, Bruce Weber, Peter Lindbergh), choreographers (Merce Cunningham) and a range of other fashion labels (Vivienne Westwood, Hermès, even Speedo). In a fascinating interview with Hans Ulrich Obrist for the second issue of indie magazine System, Kawakubo states that she loves the “accidental synergy” of collaborations. 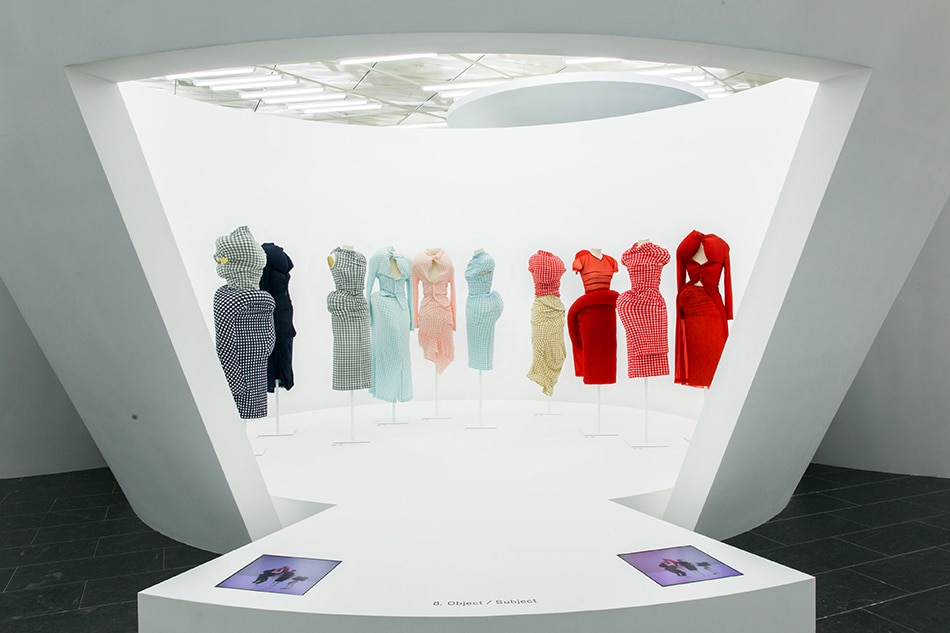 The Object/Subject area of the exhibition focuses on Kawakubo’s 1997 Body Meets Dress, Dress Meets Body collection, which, according to exhibit materials, “proposes a radical rethinking of the human form through down-padded garments of stretch nylon and polyurethane in a range of colors and patterns.” More simply put, it’s what fashion critics at the time referred to as “lumps and bumps.” All photos in this slideshow courtesy of the Metropolitan Museum of Art 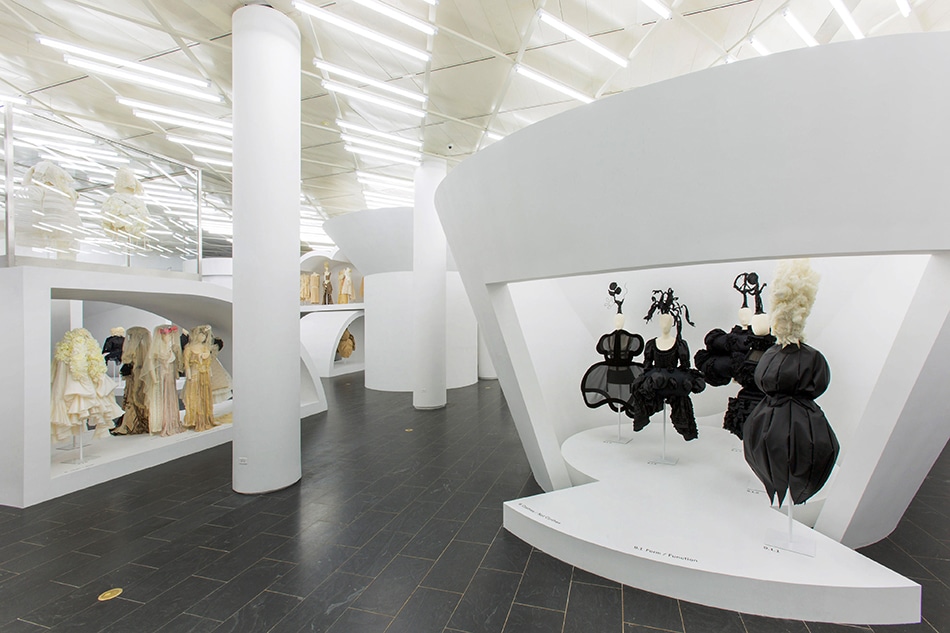 The Clothes/Not Clothes section features examples from Kawakubo’s most recent collections, which she created with the intention of “not making clothes” but “objects for the body.” The Form/Function section highlights pieces from Not Making Clothing, the first collection she produced embodying this intent. 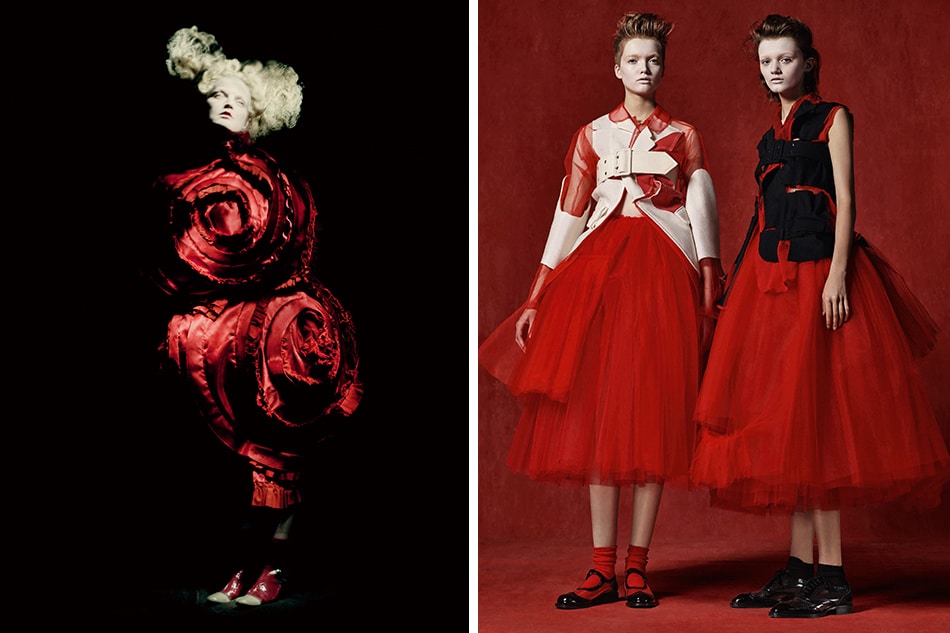 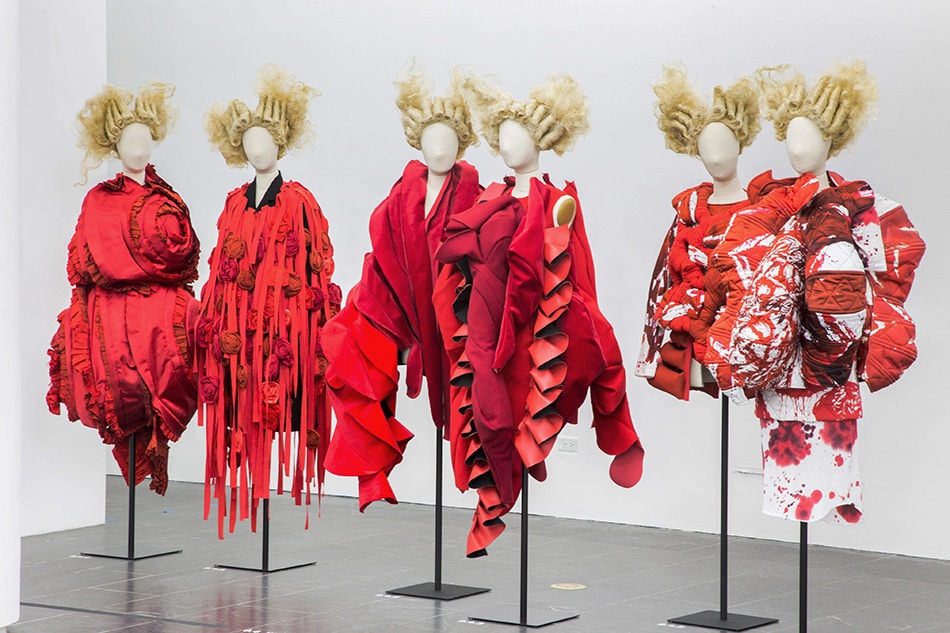 A selection of pieces from the Autumn/Winter 1996–97 Flowering Clothes collection and its later “not clothes” counterpart, the Spring/Summer 2015 Blood and Roses 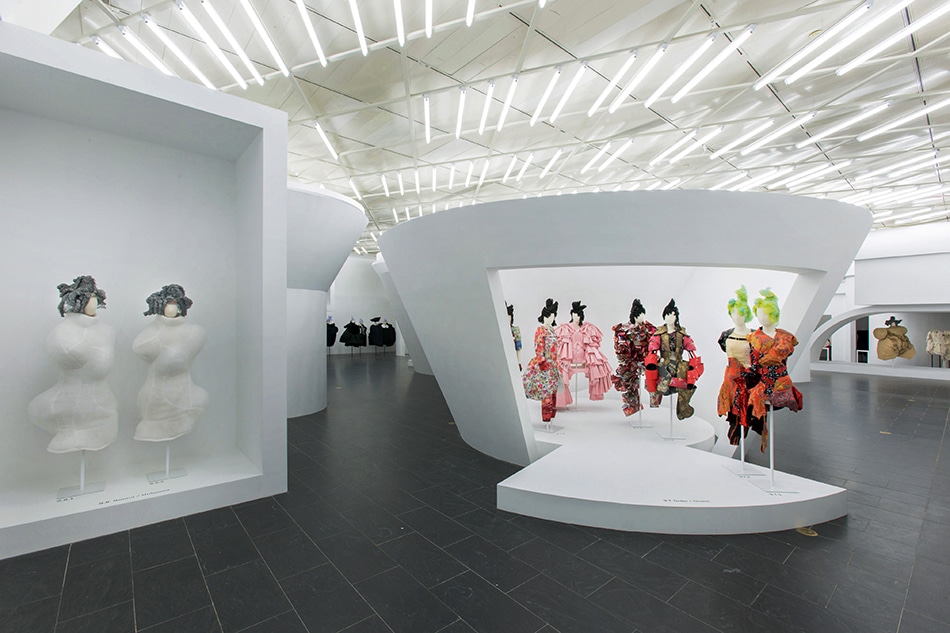 The Order/Chaos section of the exhibit contains items from the Spring/Summer 2010 Adult Delinquent and Autumn/Winter 2016–17 18th-Century Punk collections. Bound/Unbound highlights two “objects for the body,” made of white synthetic wadding, from her Autumn/Winter 2017–18 collection, the Future of Silhouette. 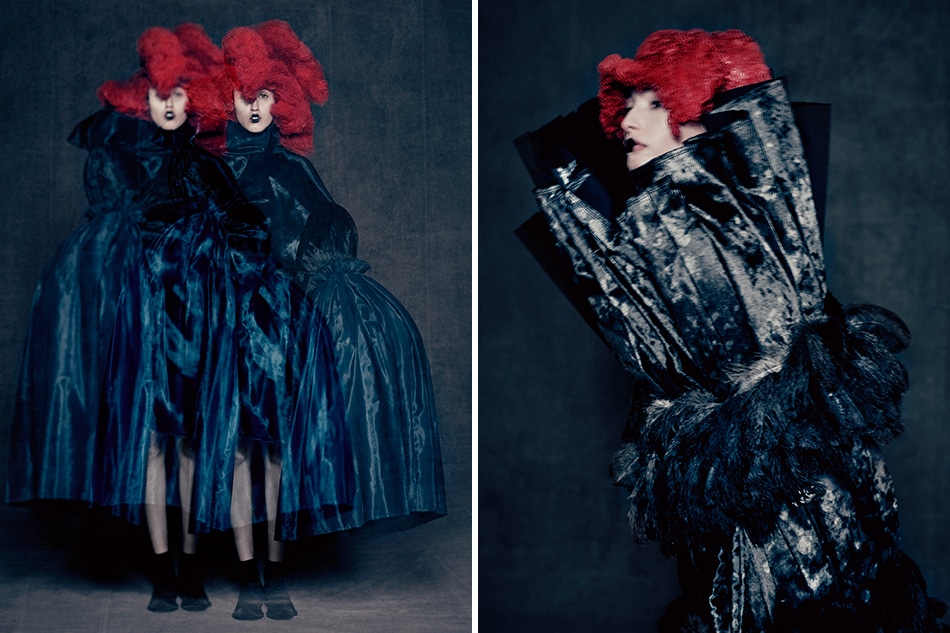 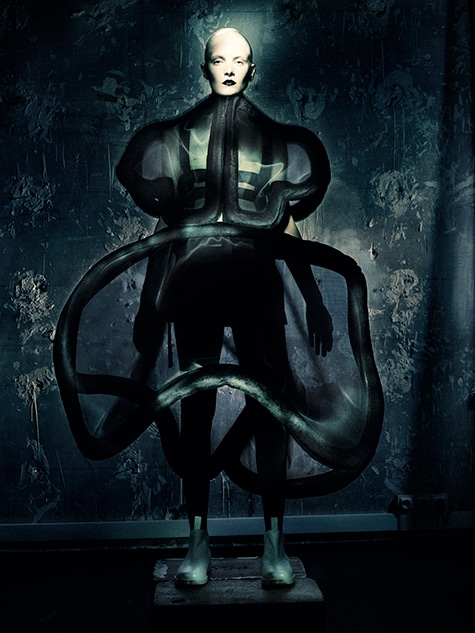 A look from the Spring 2014 Comme des Garçons collection, Not Making Clothing. © Paolo Roversi, courtesy of The Metropolitan Museum of Art

All this radical originality combined with old-fashioned toil has made CDG a growth label for buyers and collectors in the vintage market. A black knit ensemble from the Autumn/Winter 1983 collection went for more than $33,500 at Kerry Taylor Auctions in London in 2015. According to 1stdibs dealer Cameron Silver, founder of LA’s Decades and a CDG wearer, Kawakubo’s designs will stand the test of time to become classics, because they validate the artistic side of the industry. “Not everything is a museum piece, however,” Silver adds. “Every time I go into CDG, I find something I never knew I wanted: yet another shirt!”

Marilyn Glass, another 1stdibs dealer, has long been a collector of innovative fashion and cites among her favorites Kawakubo’s Fall 2005 Broken Bride collection, which, she says, “is considered perhaps her most important, melding the flair of feminine Victorian fashion against the clash of unharmonious fashion.” As Kawakubo puts it, “The right half of my brain likes tradition and history. The left wants to break the rules.”

Bolton’s collaboration with Kawakubo has produced a thought-provoking exhibition unlike any other he has curated for the Met. (His previous efforts, of course, include 2011’s groundbreaking — and attendance-record breaking — Alexander McQueen show and 2015’s “China: Through the Looking Glass.”) It stays with you long after you leave the museum. Conventional fashion today is about revealing more and more of the body, and beautiful though that can be for a moment or two — yawn, what is in its future? Nudity? That is for a planet Elon Musk will be taking us to. Kawakubo foresees an alternative beauty, where the body defers to the drape and is once again a mystery to be explored. Kawakubo educates the eye. Love it or hate it, you need to see it.