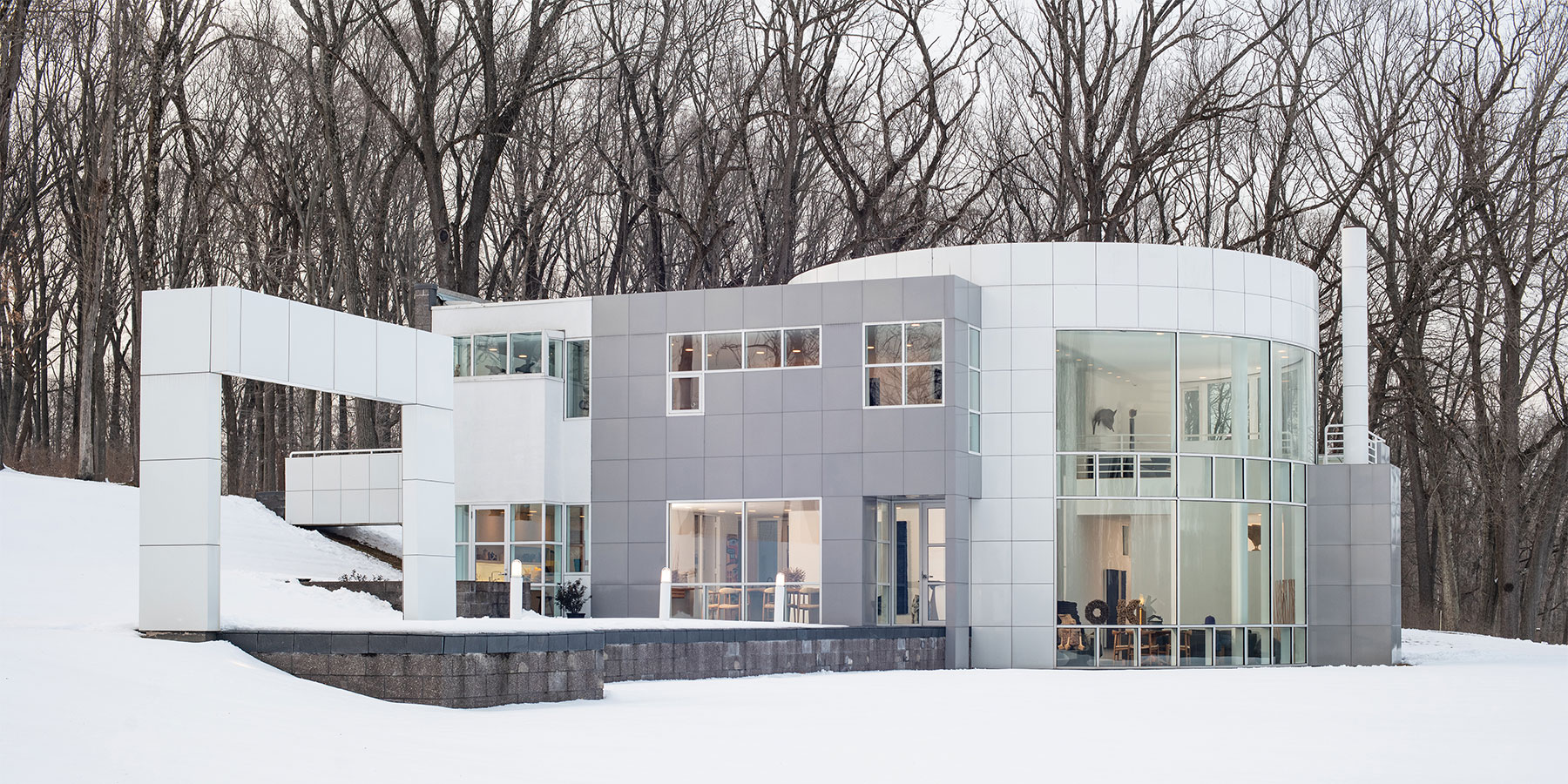 “Everything started with a table we commissioned from Edgar and Joyce Anderson,” says Louis Grotta, standing in the Richard Meier–designed house he shares with his wife, Sandy, and the hundreds of craft-centric art and design objects they have amassed over five decades. “Our collection has grown organically — word of mouth is still important for the craft world.” The Andersons, known for their sleek hand-made wooden furniture, introduced Louis and Sandy to Japanese ceramist Toshiko Takaezu. These connections led them to other creators, both emerging and more established — not least Sheila Hicks, now a close friend. Today, they exhibit the works of these talents throughout the house, which sits on seven hilly acres in Harding Township, New Jersey.

A recently released book documents the starchitect-designed New Jersey residence (top) of Louis and Sandy Grotta and the collection of art, furniture and jewelry they’ve amassed over the course of more than five decades. The living room (above) contains the first piece the couple acquired, a table by Edgar and Joyce Anderson, surrounded by Hans Wegner chairs. The couches are by Mies van der Rohe and the tall bamboo chair by Hiroki Takada. Sheila Hicks and Helena Hernmarck made the textile pieces, and Maija Grotell, Toshiko Takaezu, Wayne Higby and Kenneth Ferguson created the ceramics. The bird sitting in the niche is by John McQueen. All photos by Tom Grotta

Browngrotta arts, a Connecticut-based fiber and modern craft dealer and catalog publisher owned by the couple’s son Tom Grotta and his wife Rhonda Brown, recently released The Grotta Home by Richard Meier: A Marriage of Architecture and Craft. Joining a roster of nearly 50 art catalogs the gallery has published over three decades, the 336-page coffee table book features 300 photographs, shot by Tom himself, that celebrate the collection’s interplay with Meier’s sleek, light-filled architecture. A wide range of high-profile contributors, including artists and designers — Jack Lenor Larsen, John McQueen, the late Wendy Ramshaw, David Watkins and Sheila Hicks — as well as design and craft critics Joseph Giovannini and Glenn Adamson, present perspectives on the collection and the couple’s dedication to a life immersed in beauty. The book, says Tom, was designed to reveal “how two people live and breathe within a collection that stands the test of time.” 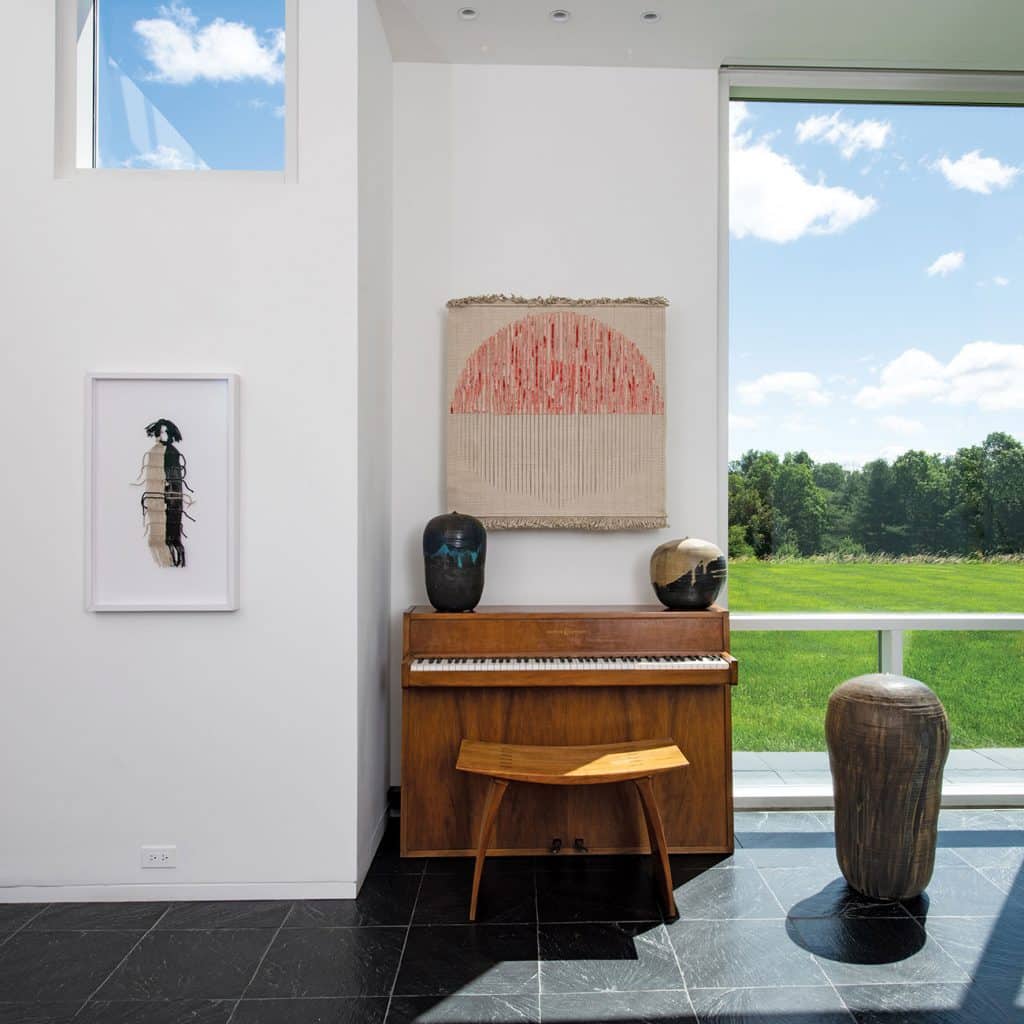 A textile work by Lenore Tawney hangs above a piano by Andreas Christensen with a bench by the Andersons. The ceramics are once again by Takaezu.

It does that, to be sure, while also illustrating how Meier’s structure celebrates the works. Balancing geometric volumes with a Palladian-style rotunda, the sleekly contemporary two-story house, paneled in white and gray enamel, affords an uninterrupted 360-degree vista of greenery. The couple’s art, furniture, jewelry and kitchen ware, all by leading names in the field and making exquisite use of such materials as wood, stone and natural fibers, find a beautiful backdrop in the lawn and old-growth trees, which Meier brought into the interiors. The circular living room’s 22-foot-tall windows open it to the views and let ample light wash over the space, which contains such highlights as a towering bamboo chair by Hiroki Takada, a Wendell Castle table featuring a face blowing a large horn and freestanding mixed-media lamps made partially of glass — a rarity in the Grottas’ holdings — by Bertil Vallien and Thomas Hucker.

In the dining room, more Wegner chairs surround another table by the Andersons. On the table is a feast bowl by Chief Don Lelooska. Through the windows can be seen outdoor furniture by Harry Bertoia and Lella and Massimo Vignelli. Textiles are once again by Hernmarck and Hicks, as well as Mariette Rousseau-Vermette. Among the baskets is one by the Campana Brothers.

The way Meier situated the building in the terrain reminds Louis of formal Japanese landscapes. “Kyoto gardens have foregrounds, middle grounds and Mount Fuji in their backgrounds — the only missing element in this view Richard gave us is Mount Fuji,” says Louis, who befriended the architect, a fellow New Jersey local, during their school days in the late 1940s. Meier became an international architecture star and Louis the president of Paige Electric, but they remained in touch.

In the early ’80s, when the Grottas asked Meier to recommend a designer for their residence, he suggested none other than himself. His familiarity with the collection and the couple’s vision prompted a design that unequivocally honors their holdings. Although he has a distinct — and ornament-free — visual language, Meier created a building that lets decorative objects take a leading role on the architectural stage. McQueen’s bamboo bird, for example, overlooks the living room, its wings spread open, perched inside a 32-inch nook Meier carved below the ceiling — providing the perfect place to display a key piece while serving the important function of inviting additional light into the adjacent den. 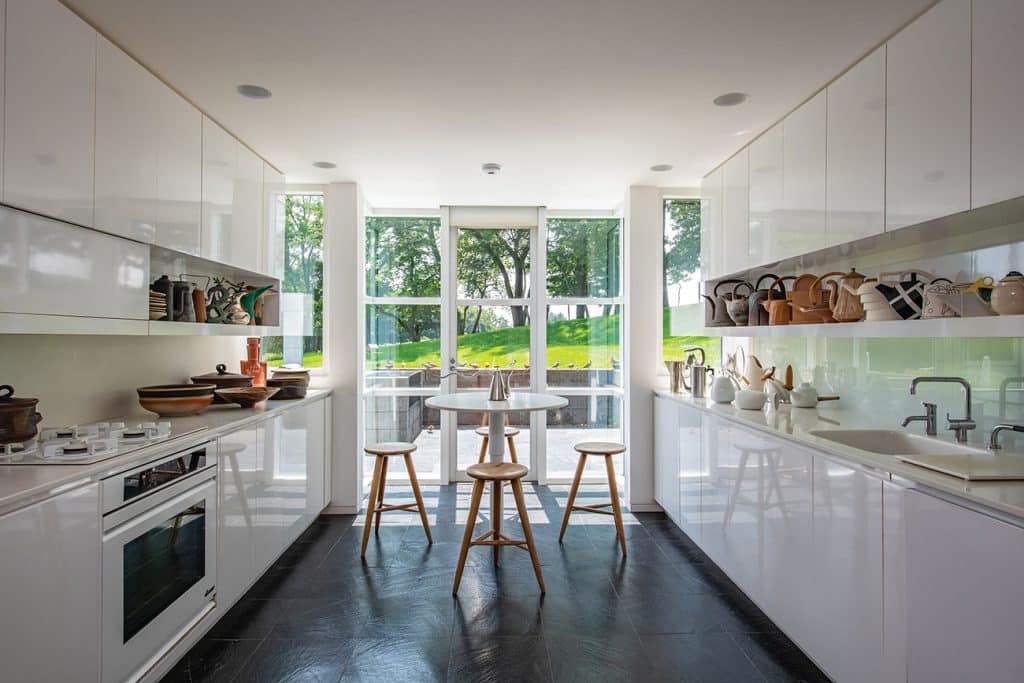 The kitchen displays the Grottas’ collection of teapots, including examples by Nicholas Homoky, Karen Karnes, Los Castillo and William Wyman.

“The Grottas began forming their collection at a generative moment in American craft history, when few saw a contradiction between the sculptural, functional and expressive qualities of an object,” says Adamson, onetime director of New York’s Museum of Art and Design, where Sandy, a former interior designer, is the institution’s longest serving board member. “A set of plates is, for them, no more or less special than a giant wall hanging. Over the many decades of their involvement in the field, they have stuck firmly to this vision, and the result is a home that is at once totally livable and deeply aesthetic.” 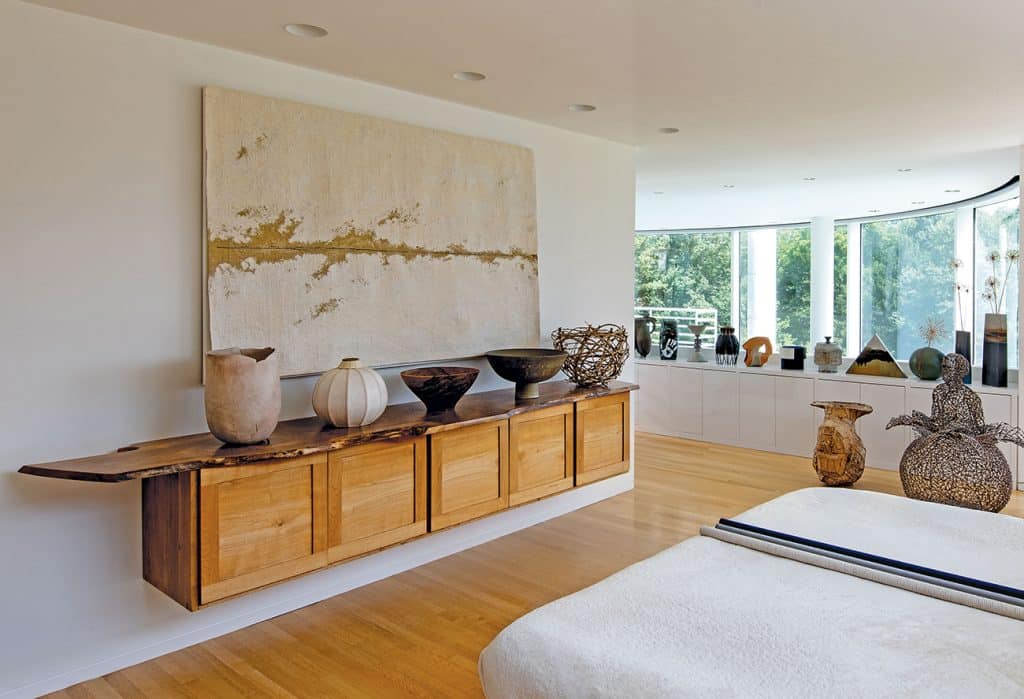 In the master bedroom, a Sara Brennan tapestry hangs over a console by the Andersons that shows off pieces by Richard DeVore, Dona Look and Gyöngy Laky, among others.

The Grottas let their gut guide them when deciding where to place their works. “Art will tell you if it belongs there,” say Louis. An egg-shell-colored rectangular Mariette Rousseau-Vermette tapestry painting, for example, whose motifs echo the house’s medley of geometry forms, looks as if it had been commissioned for the staircase wall where it hangs. But it is actually one of a dozen pieces rescued before the recent hurricane that destroyed the late artist’s studio in Canada. “Mariette made this tapestry in nineteen-eighty, but it finally found a wall to accommodate its ten-foot width,” says Louis. 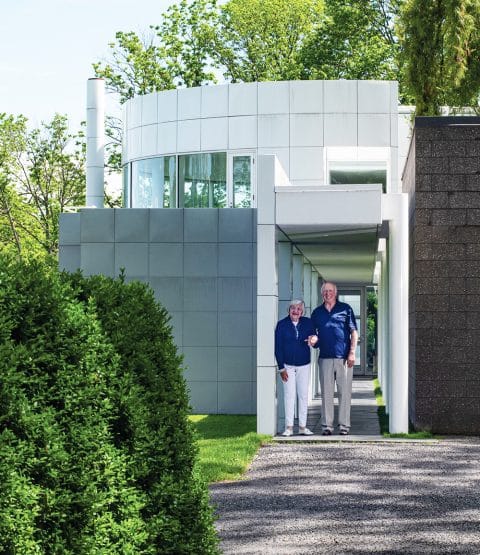 The Grottas commissioned the house in the 1980s from Richard Meier, with whom Louis had grown up.

In the master bedroom, the bed faces a console crafted by the Andersons, which displays small-scale objects — a voluptuous ceramic bowl by Richard DeVore, a Dona Look sewn-birch-bark basket and a wooden Gyöngy Laky bowl. These sit beneath an abstract earth-toned Sara Brennan tapestry that hangs on the wall. In the adjoining bath, Takaezu ceramics sit in a large window, their aqueous shades complementing nature’s greens and yellows outside.

Despite their half century of acquiring objects they love — not to mention their commissioning a starchitect-designed house to celebrate these holdings — the Grottas do not identify themselves as collectors, much less as curators. “We’ve built ourselves a house and made sure things coordinate with one another,” says Louis. Led by intuition, they simply let an affinity for objects, and for the people who make them, guide their unerring eye. 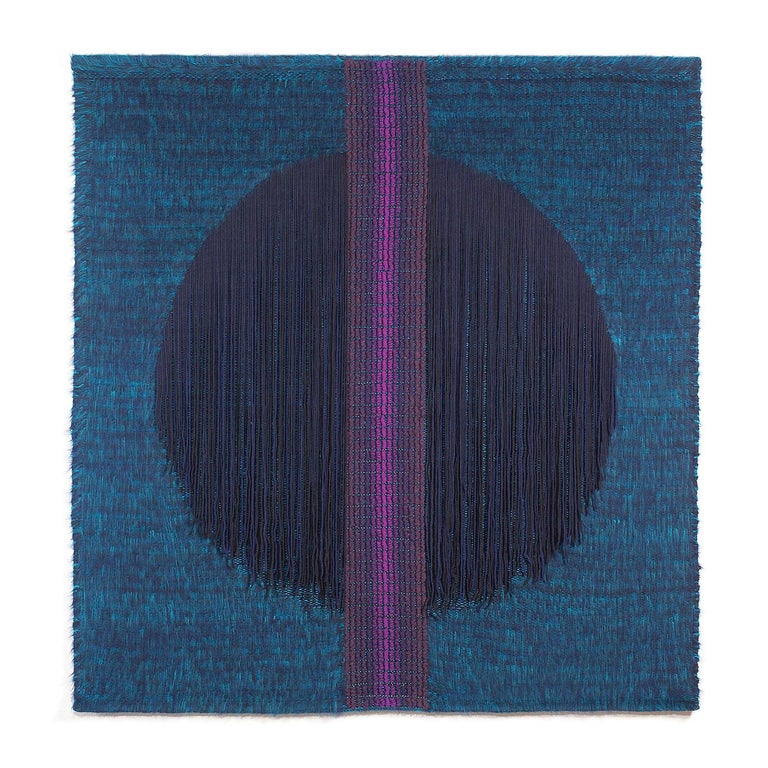 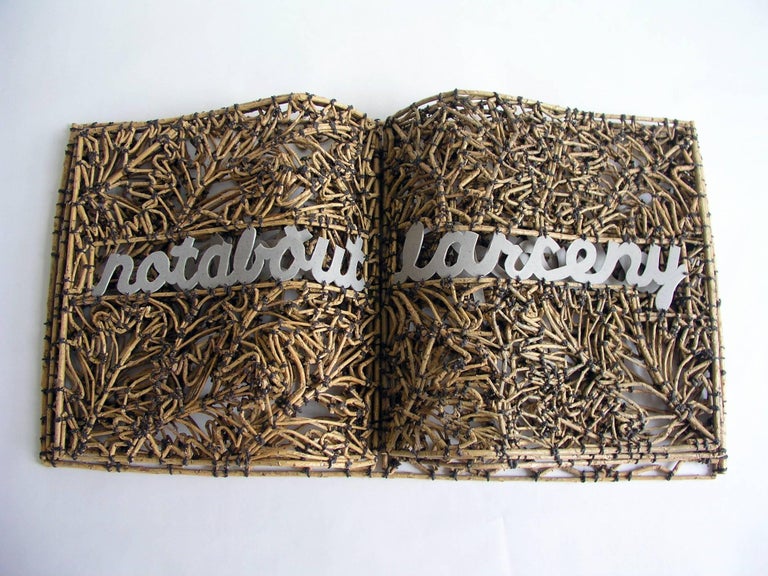 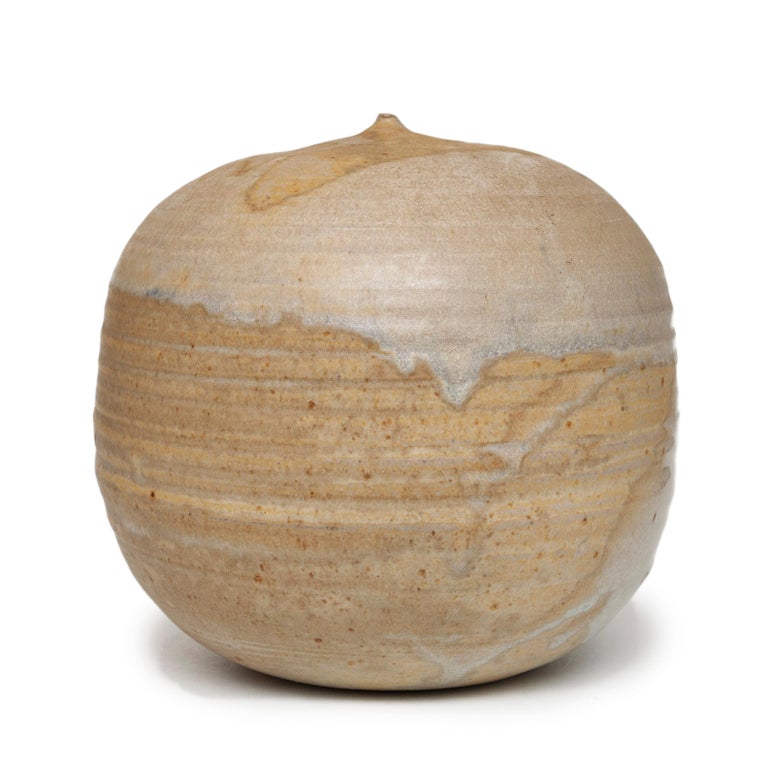 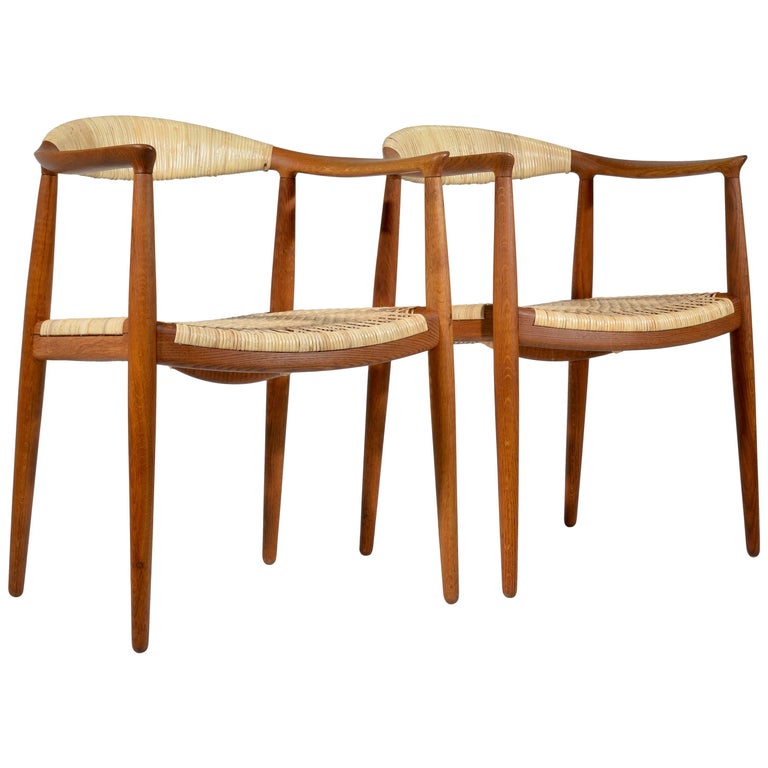 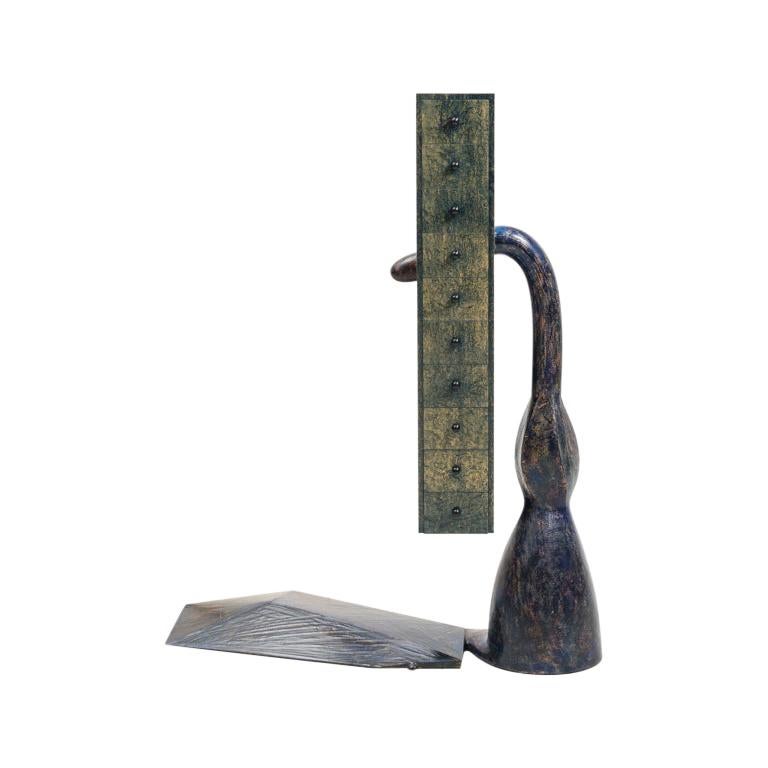 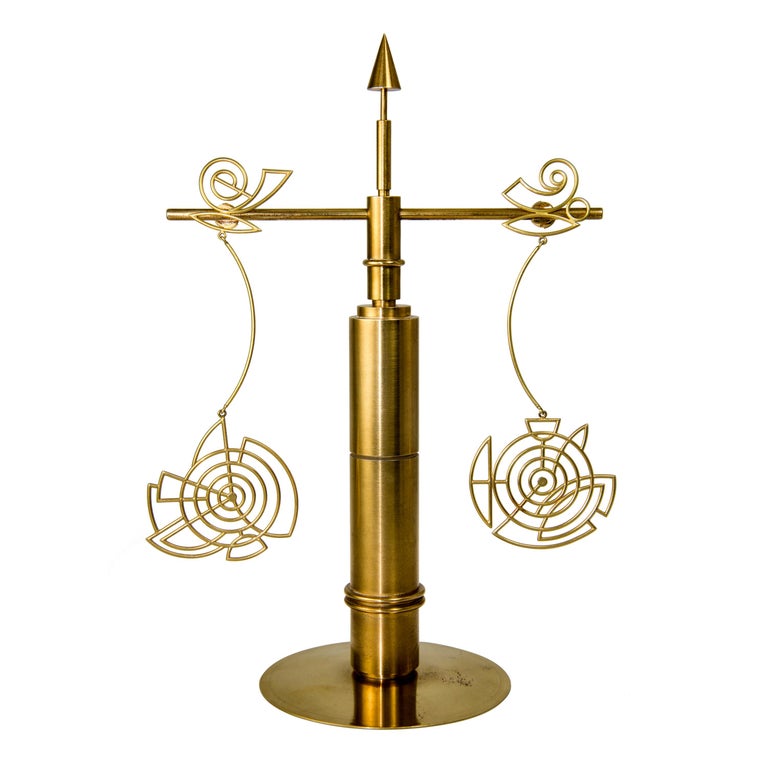 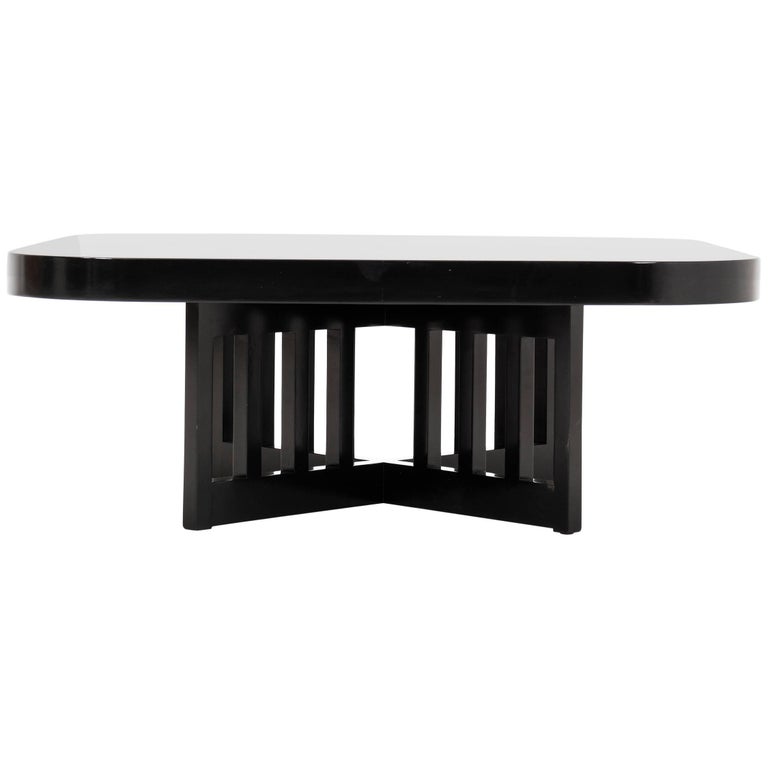 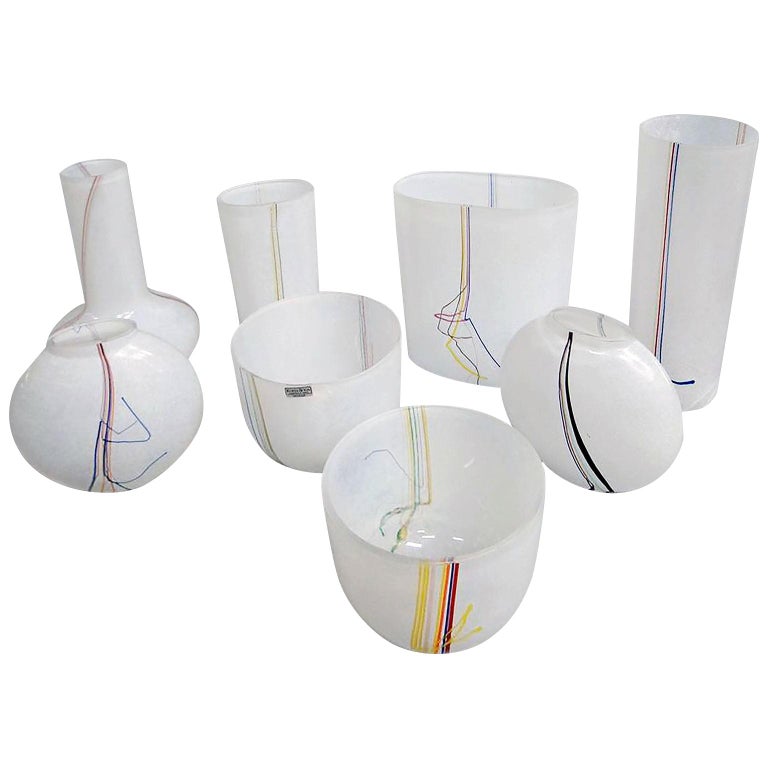 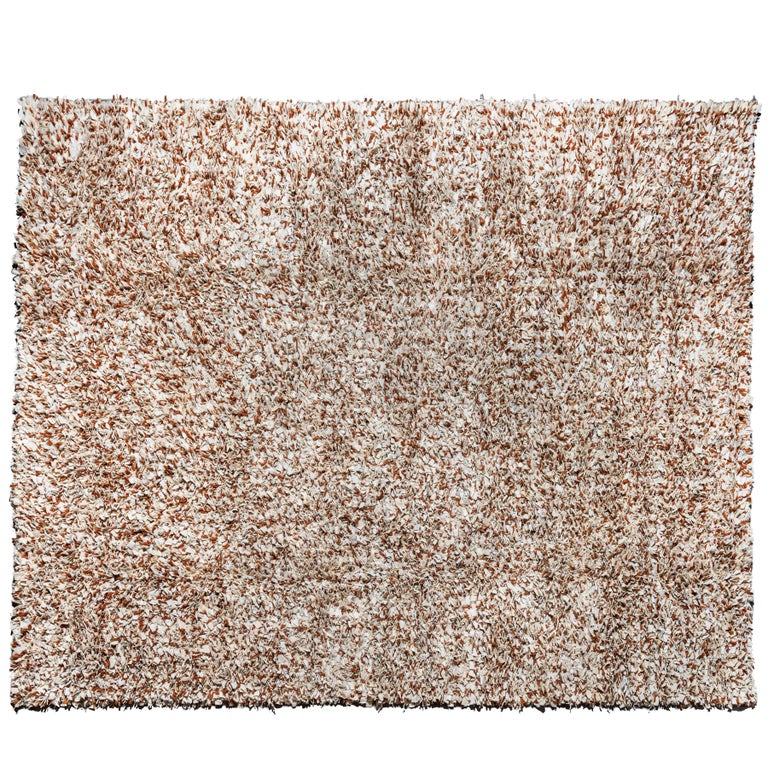