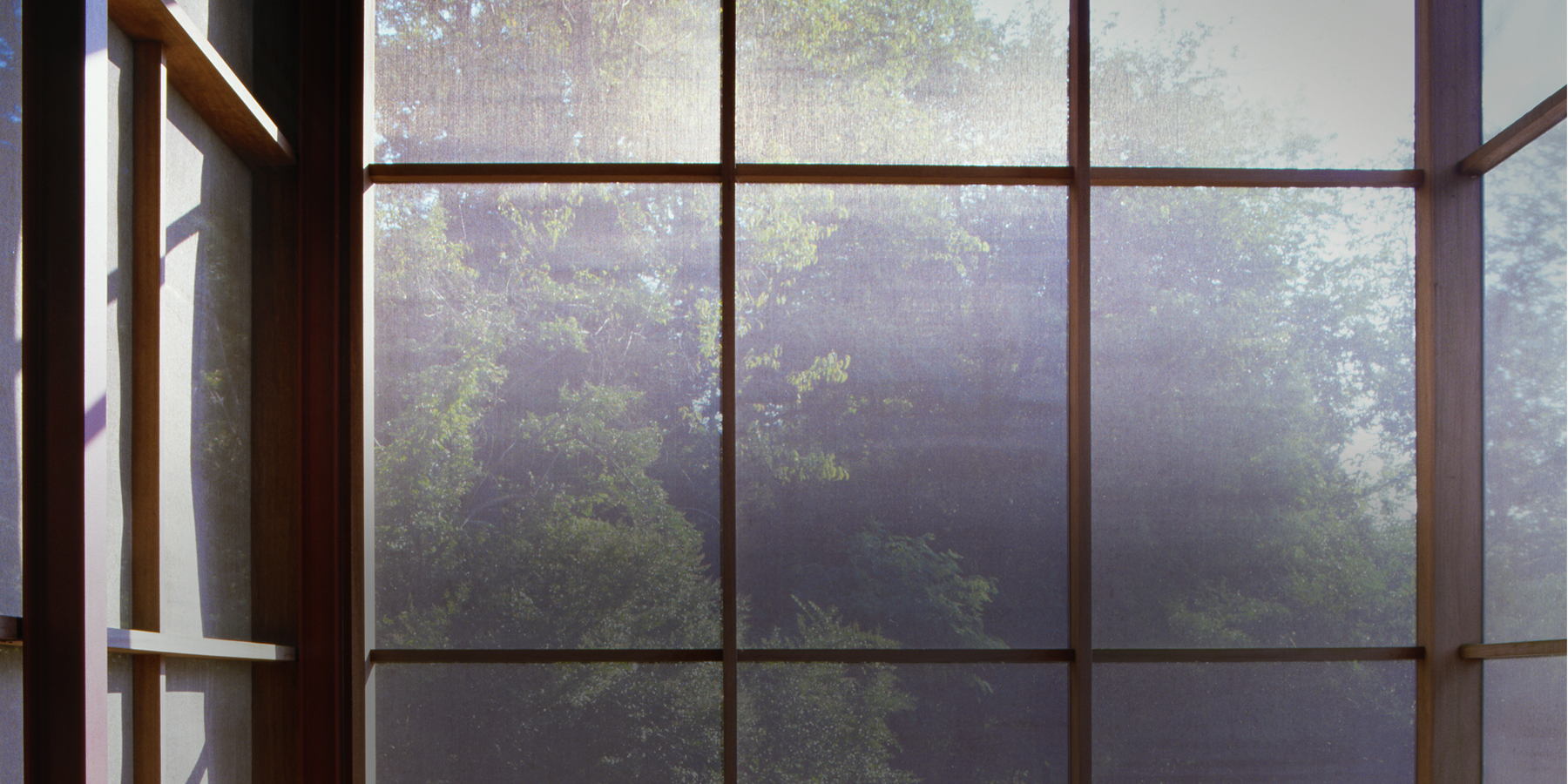 In a new column, Introspective highlights a handful of examples of a particular type of domestic space. Here, we look at various takes on the very emblem of summer: the screened porch, whether rustic or refined, from Connecticut to Montana to Minnesota.

Does any interior space say summer — that is, the lazy, nostalgic ideal of the season as opposed to the overscheduled reality — quite like the screened porch? From a practical standout, such spaces offer the best of both indoors and outdoors: more protected than a terrace or yard, yet more connected to nature than a living room. Prevalent in idyllic islands, thickly wooded hillsides, towns throughout the South and other places where time moves slowly (and mosquitoes, ticks and other critters move fast), screened porches tend to elicit powerfully pleasant memories: the waft of salty air mixed with sunscreen, the clink of ice cubes in a sweating glass, the sight of playing cards and paperback books, the flavor of mint juleps and ripe peaches. If you’re lucky enough to have passed the night on a screened-in sleeping porch, you may even recall the chirping lullaby of nocturnal crickets and the song of birds rousing you awake in the morning.

Here, we’ve gathered a stylish sampling of porches that vary in style and form but all convey the relaxed, romantic spirit of summer — and, we hope, evoke many of its seasonal pleasures, too. 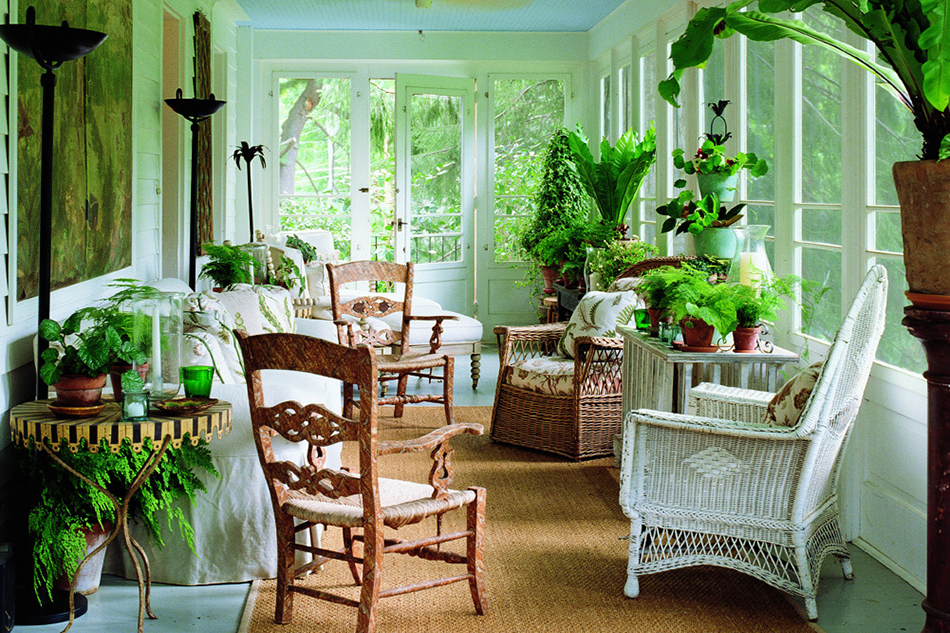 August 6, 2014“A screened porch is essential to summer living,” says Williams of the outdoor room attached to her own Connecticut home. “Whether on a smoldering day with the cooling ceiling fans humming or a rainy afternoon with the sound of rain drops on the tin gutters, the porch, and its long comfortable sofa, is the perfect place for an afternoon nap with the dogs.” Photo by Fritz von der Schulenburg 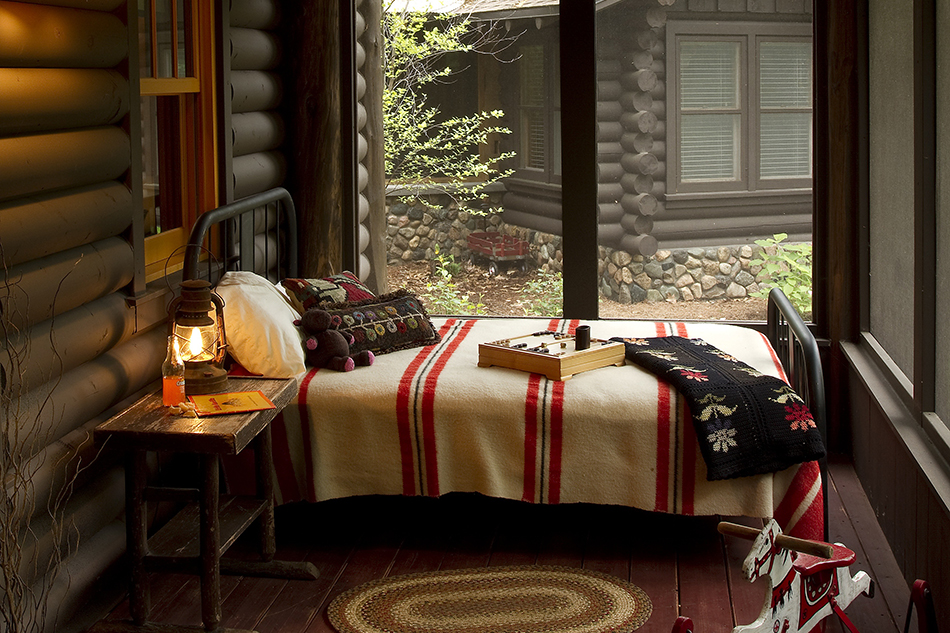 Fries, of the Minneapolis-based BeDe Design, used reclaimed timber, antique furniture and vintage fabrics to give this new-build cabin an old-time feel. “I grew up in a house in St. Paul with a screened-in porch where I spent many summer days chatting with my sisters or hanging with my friends,” she says, “I’ll always make sure there is one of these special rooms in every house I live” — and, presumably, in the houses of her willing clients. Photo by Rick Hammer 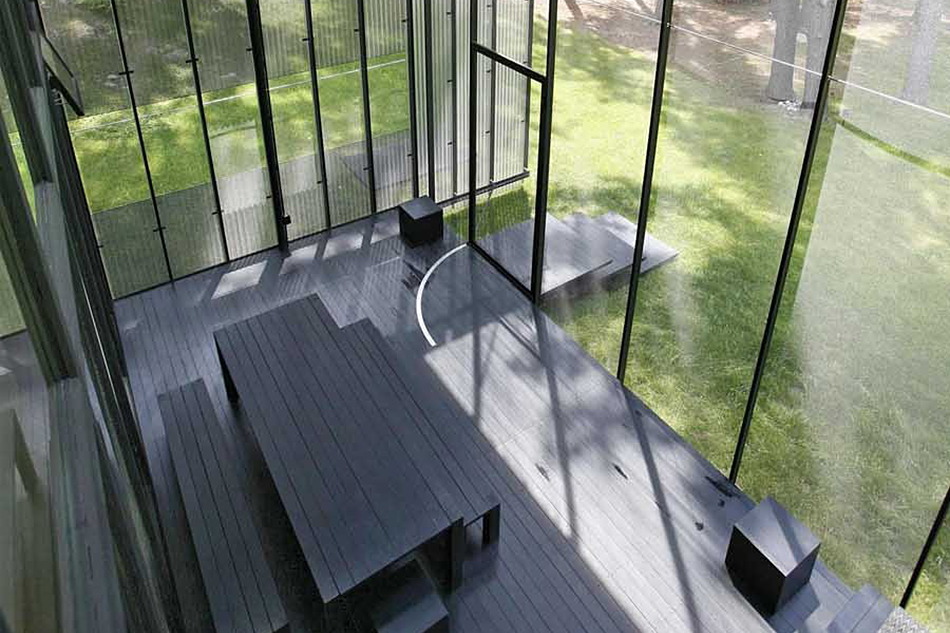 For the Hudson Valley house of the gallerist Cristina Grajales and her wife, attorney Isabelle Kirshner, New York architect Phifer created a two-bedroom cedar-and-steel box with a thoroughly minimalist screened porch on one end. As is true with the rest of the house, the porch lets in an abundance of light and air while making the surrounding nine-acre wooded parcel of land the main visual attraction. Photo by Scott Frances 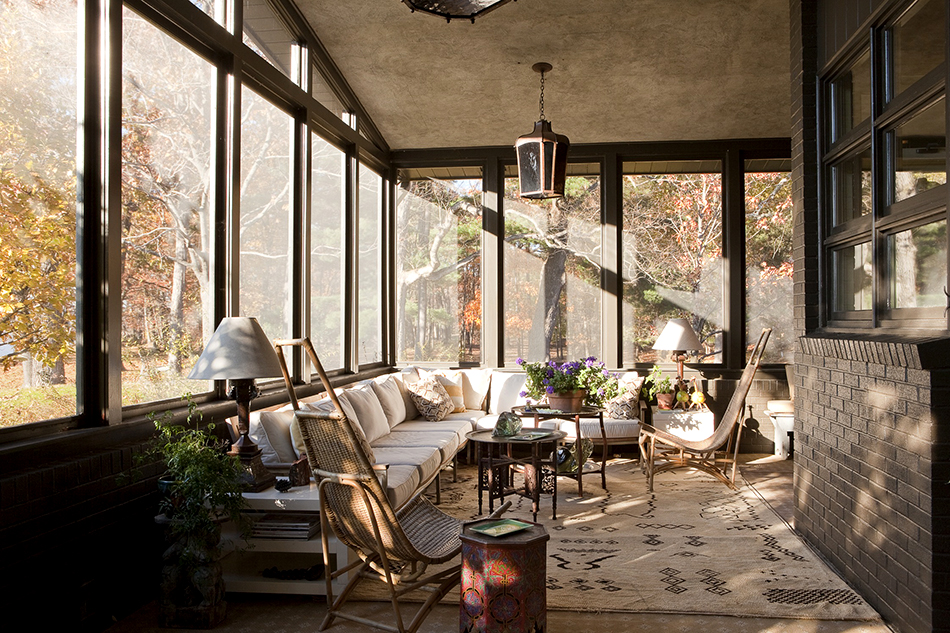 Carey Maloney and Hermes Mallea, partners in life and work, outfitted the screened porch of their Hudson Valley home with a rug from Doris Leslie Blau, wicker furniture brought back from Kerala, India, and table lamps and lanterns from Mexico. “It’s a large L-shaped space with 18-foot ceilings, and it opens into the living room, bar and kitchen,” says Maloney. “We eat all our meals there, lounge around and read on the sofas and even watch television. The sofas are long enough to sleep on, lulled by the crickets, the wind in the oak trees and the distant train whistles.” Photo by Antoine Bootz 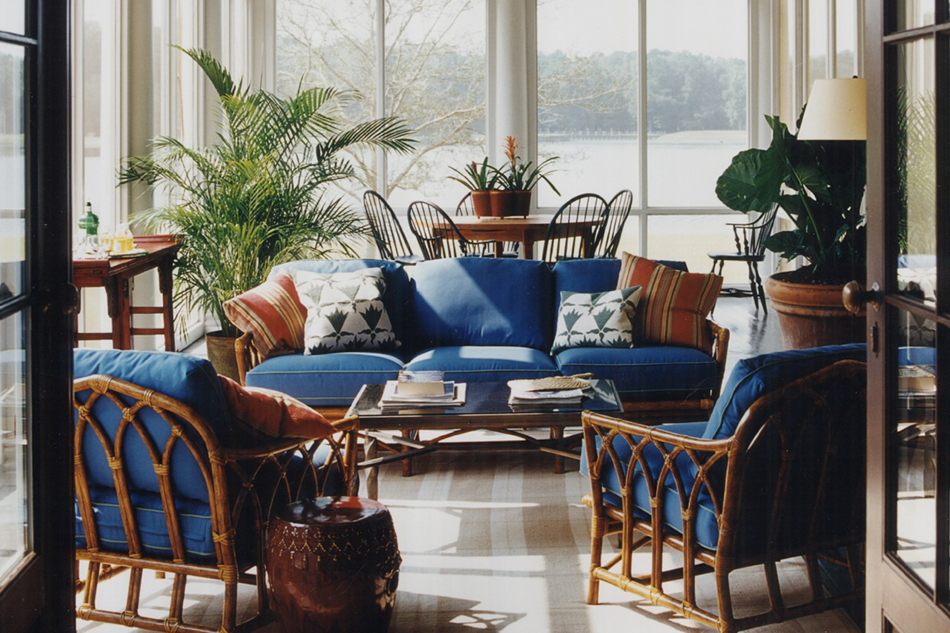 In 1999, Town & Country commissioned the Manhattan-based Jayne to decorate a sprawling showhouse in the historic Ford Plantation, a residential community 18 miles outside of Savannah. Jayne points out today that, thanks to the area’s temperate climate, the porch can be used year-round, and he decorated it as such, mixing “Gothic” rattan furniture with pieces more typical of an indoor living room. Photo by Maura McEvoy 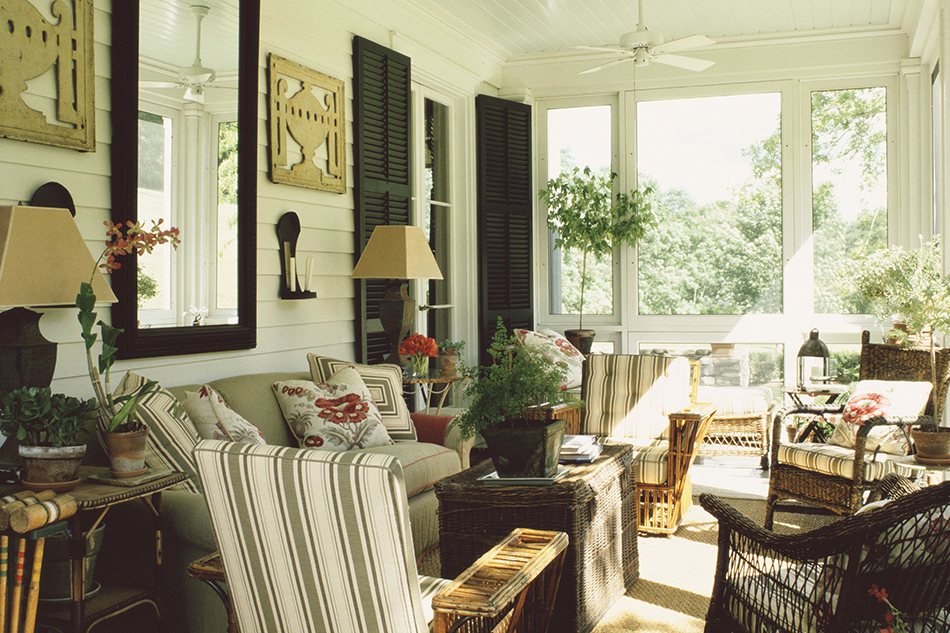 “Nothing beats a screened porch in summer. It becomes the de facto living room, dining room, office and, best of all, prime spot for napping. I couldn’t imagine my house without it,” says New York architect Schafer, who explains he was inspired to furnish it like a “proper room” after spending time at the home of Bunny Williams. Photo by Fernando Bengoechea 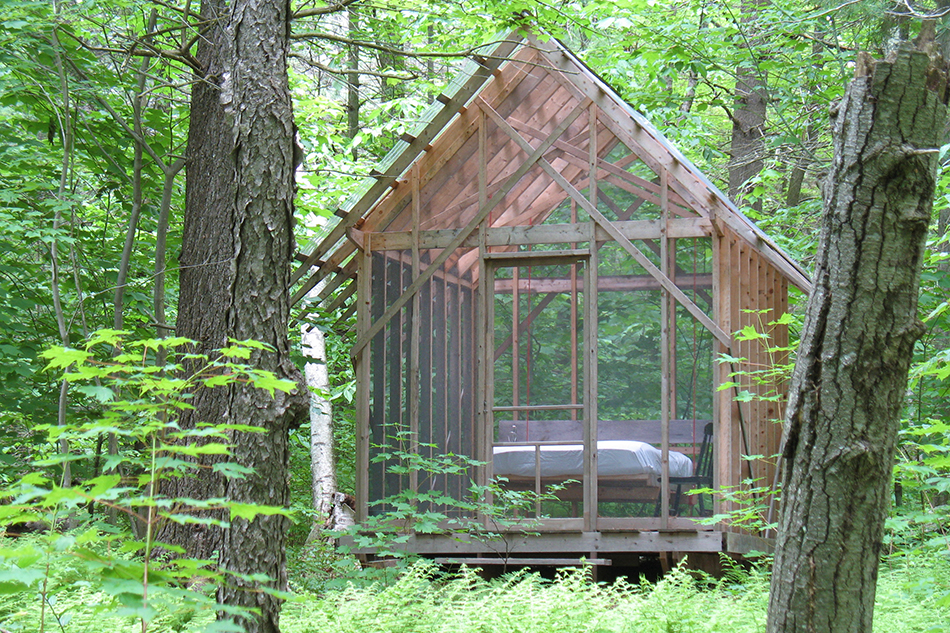 “I constructed this light, simple structure during the summer of 2005 for approximately $500,” says Vermont architect Swinburne of his free-standing take on the screened porch, which he calls Fern House. “Overnight guests unanimously report that they have never had a better night’s sleep, and I use it for summer afternoon naps.” The slatted bed frame is suspended from the roof using parachute chords. Photo by Robert Swinburne 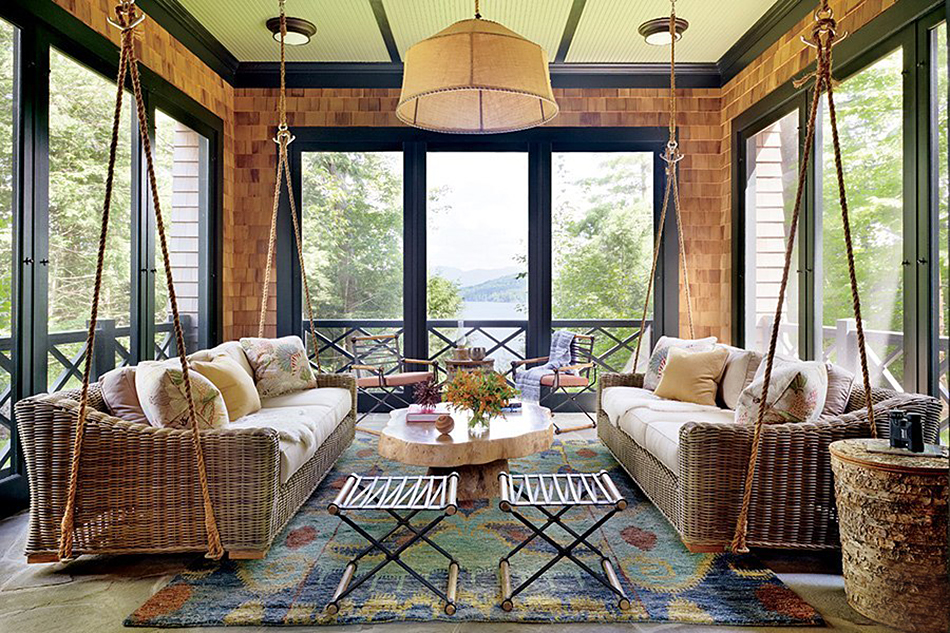 Working with the architecture firm Shope Reno Wharton, the New York–based Filicia created a lakeside family retreat for clients modeled after the fabled Adirondack “great camps” of the Gilded Age. “I wanted to blur the indoors with the outdoors,” says the designer. In the porch off the master suite, chairs and stools from Noho Modern face funky hanging wicker couches and a carpet Filicia designed for Safavieh. Photo by Pieter Estersohn 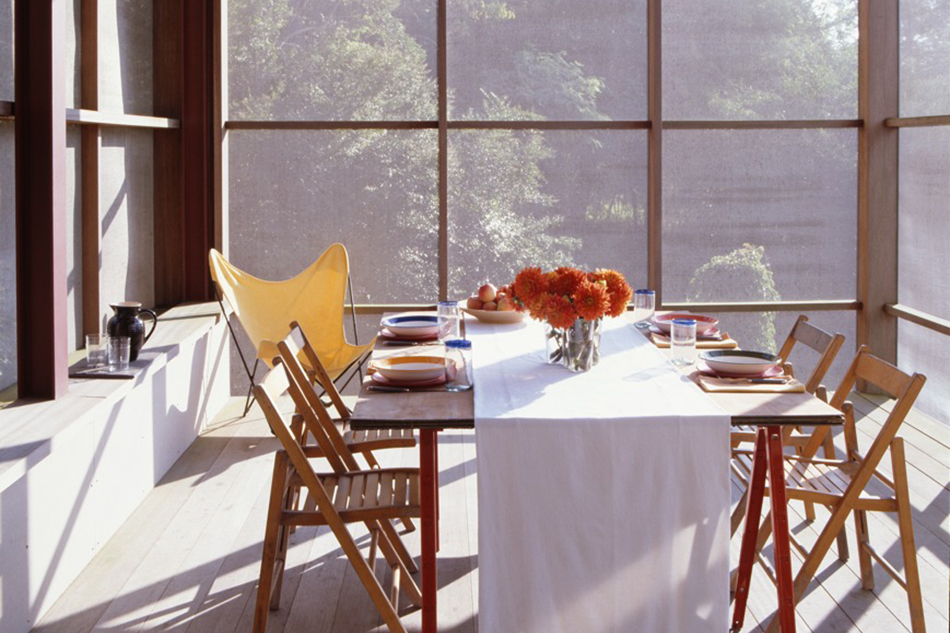 “Glass rooms are more indoors than outdoors. Screened porches, especially if they have high ceilings, are more outdoors than indoors,” says Ryall, a partner in Ryall Porter Sheridan Architects, who shares his home on Long Island’s North Fork with Barry Bergdoll, the noted architectural historian, curator and scholar. “This is everyone’s favorite non-room,” Ryall says, adding that a fireplace extends its use into October. Photo by John M. Hall 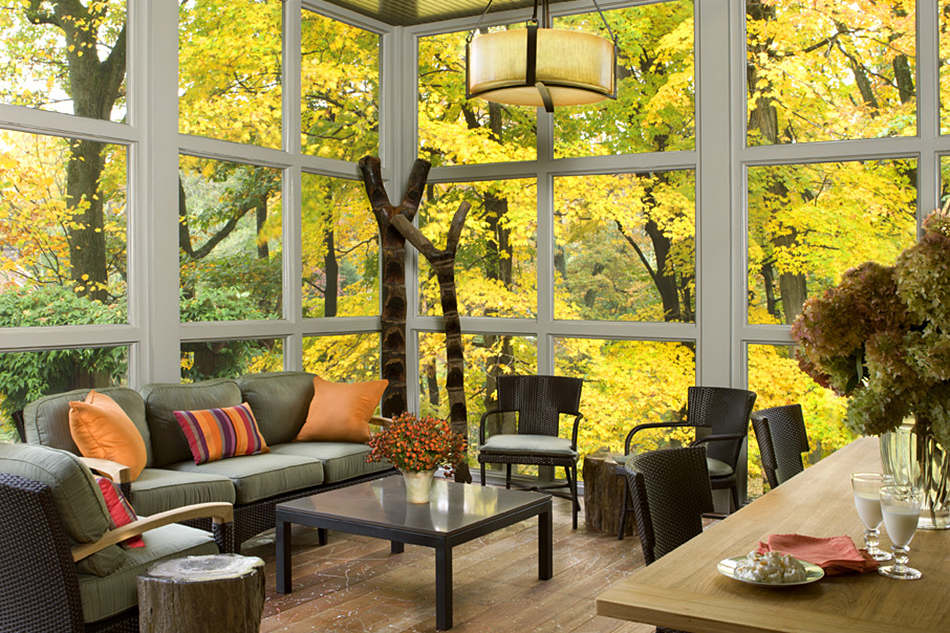 “Our client longed for an outdoor space where she could enjoy the vistas without having to be concerned about airborne visitors drawn to the streams below,” says Arthur Dunnam, the New York firm’s design director, of this addition to a 1920s house. The designers kept the look “simple and modular” rather than copying the house’s chateau-style architecture and, per the client’s request, added the same “Jackson Pollock” floor treatment they used at Twin Farms, an inn in Vermont. Photo by Nick Johnson 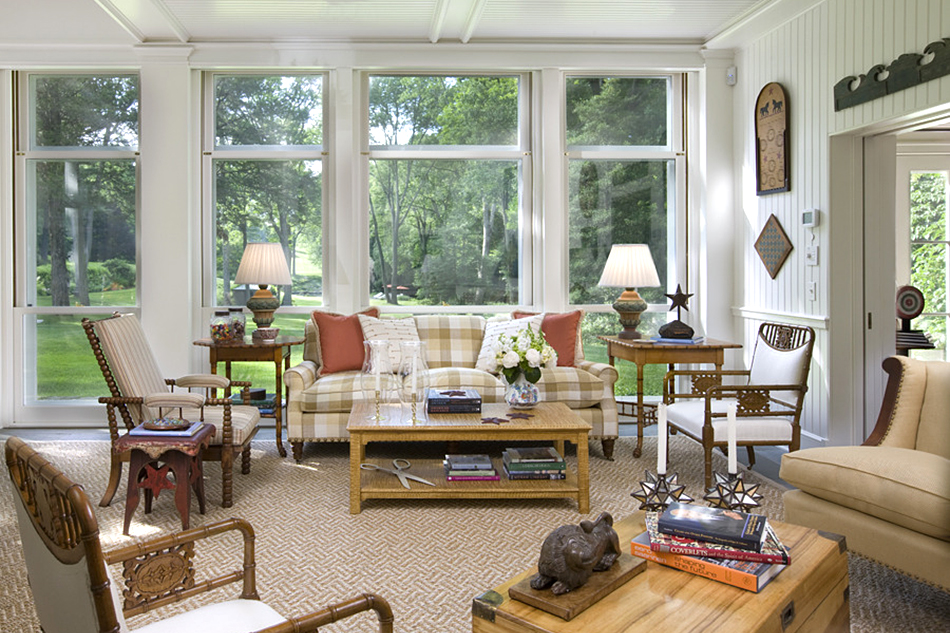 “This screened porch is actually a year-round room,” says Cullman of New York’s Cullman & Kravis about the porch adjoining her John Murray–designed home. In the summer, triple-hung windows disappear into a parapet, exposing full floor-to-ceiling screens. “This way, furniture and decorative objects don’t have to be removed and reinstalled with the seasons.” Photo by Eric Piaseki 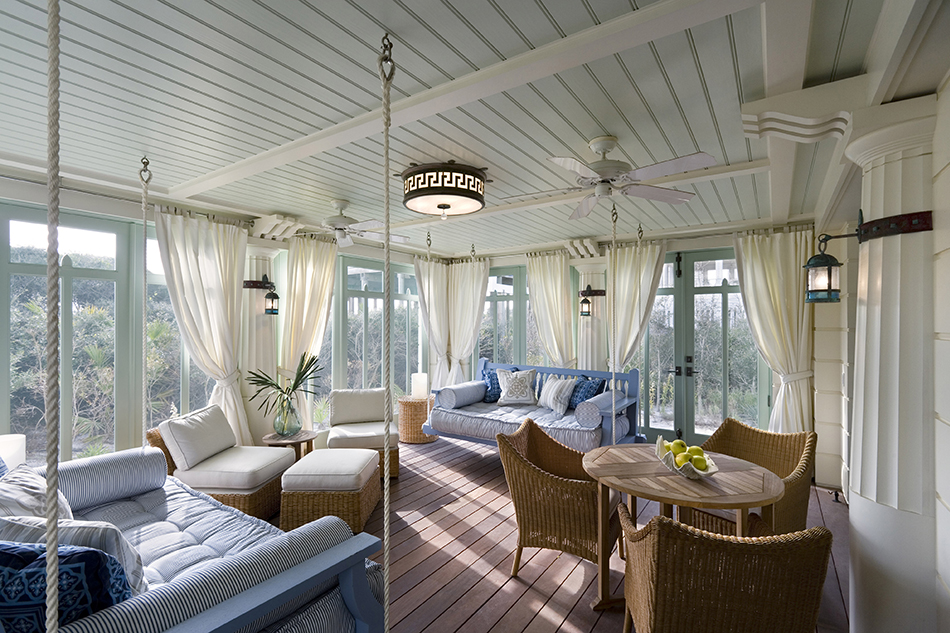 Gary Brewer acted as the lead architect on this house, creating it for what he called “an architecturally adventurous” family in the well-known New Urbanism community of Seaside. The ground-floor suite, featuring Doric columns, custom-made hanging daybeds and a subtly gradated paint scheme, connects to the bedroom of the family’s two girls and opens onto the beach dunes. Photo by Peter Aaron/Otto

“Screened porches are the most brilliant bit of Yankee ingenuity,” says Garmey, a British-born, New York– and Connecticut-based garden writer (and a frequent Introspective contributor). “There are no such things in England.” Garmey’s own porch, which appears in Annie Kelly’s Litchfield Style, is her favorite spot for summer entertaining. “It offers all the delights of a picnic without the horrors — no ants, no bees, no mosquitoes.” Photo by Tim Street-Porter 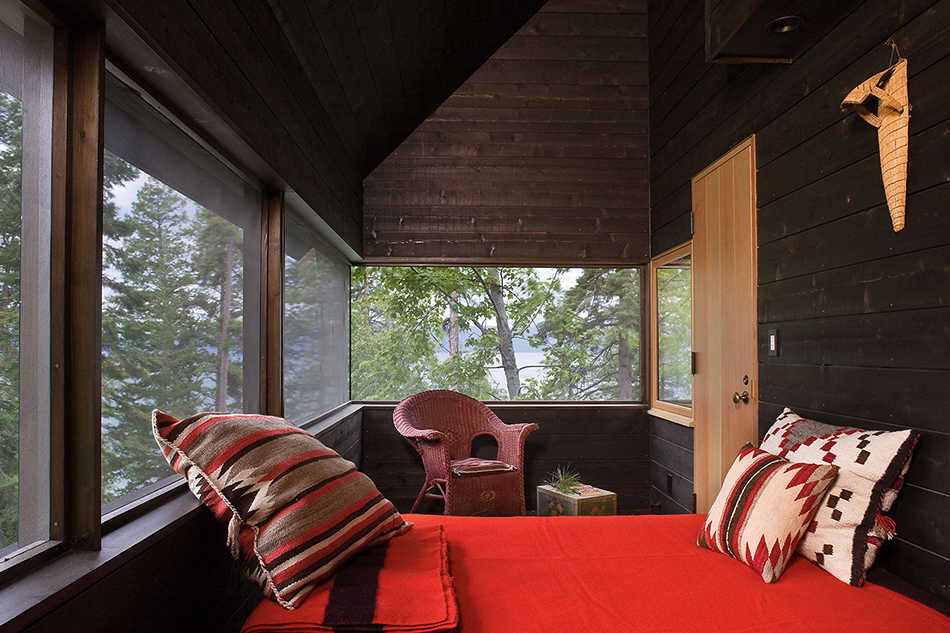 By simultaneously offering protection from and interaction with nature, “screened porches allow us to connect with our elemental selves,” says Arthur Andersson, one half of an Austin, Texas, architecture firm Andersson-Wise, which is known for creating homes that blend with their natural environments. At this rural getaway overlooking Flathead Lake, all the bedrooms are screened in, including the master suite shown here. Photo by Art Gray