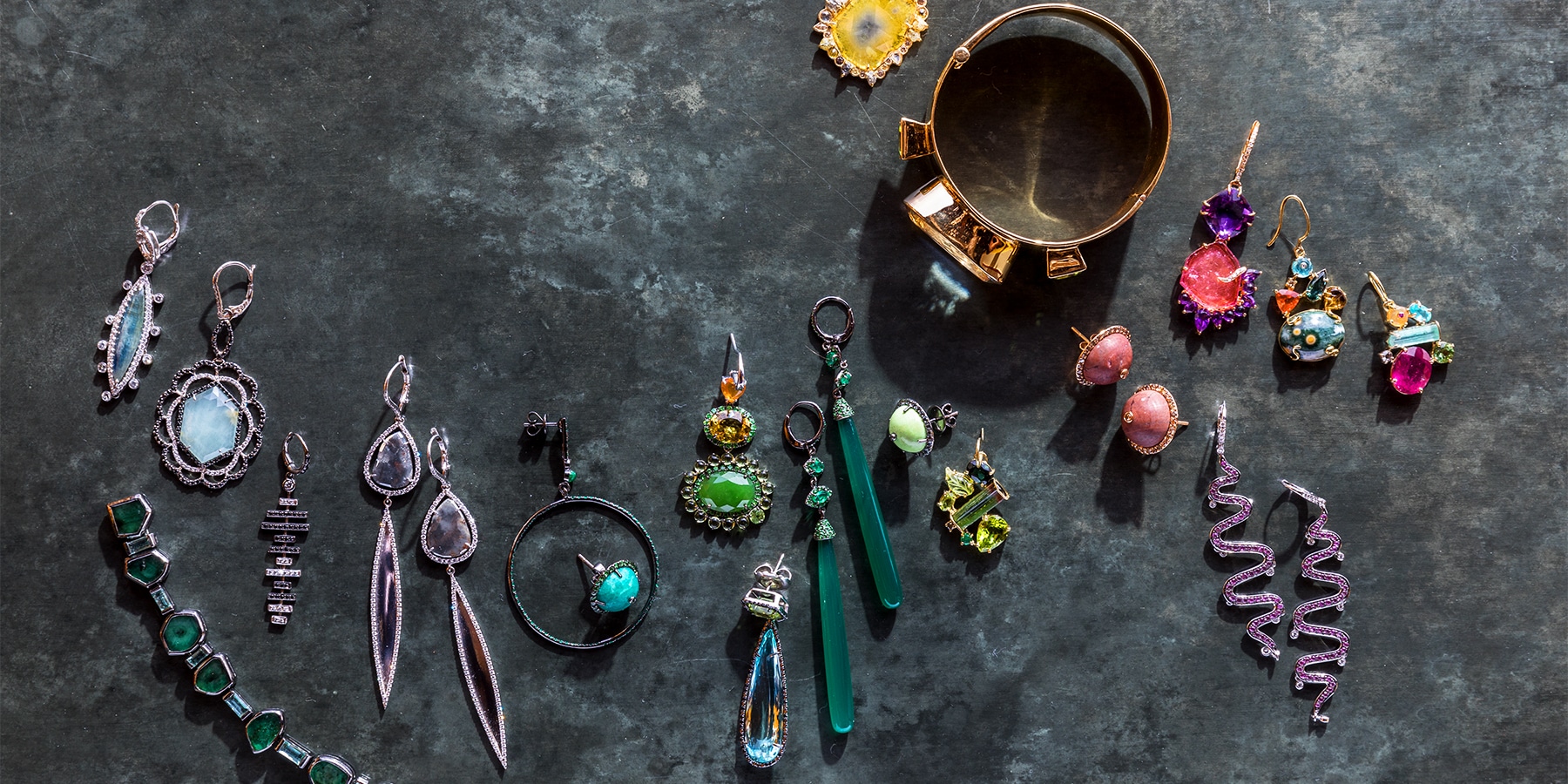 The jewelery designer's studio is filled with every gemstone imaginable.

Step inside Sharon Khazzam’s studio, in a quiet community just outside New York City on Long Island, and you see immediately that gemstones are the backbone of her practice. Bits of emerald and amethyst and aquamarine turn up in the most unlikely places: in the seams of the wooden floors, wedged into the creases of a custom-built table and stowed in the compartments of a decorative dish given to her by a client. 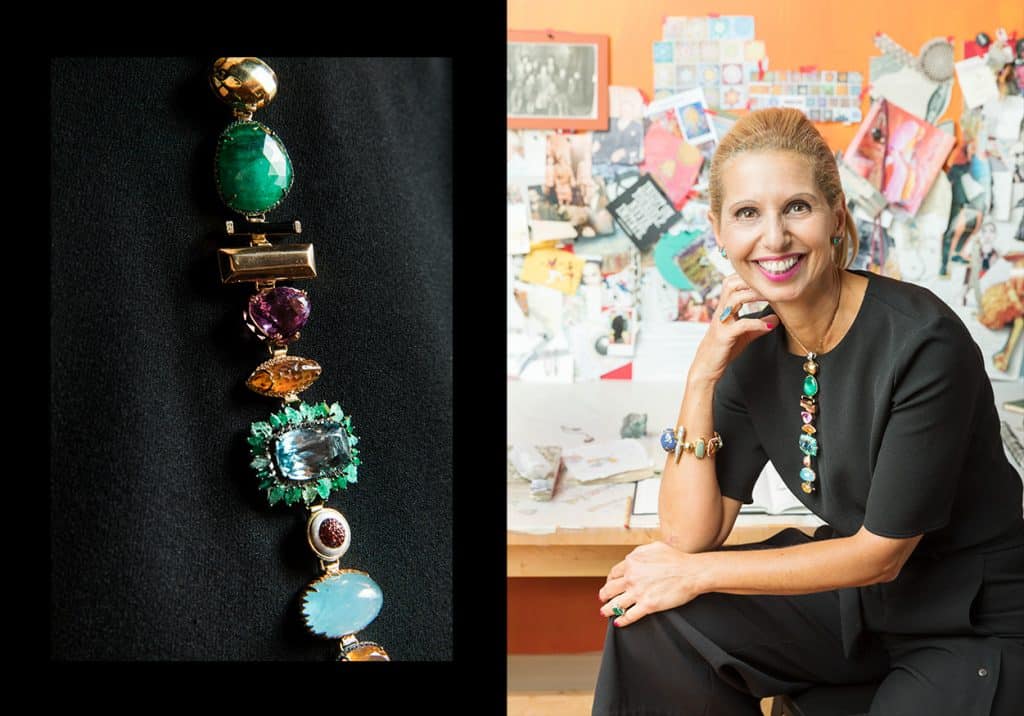 Sought-after jewelry designer Sharon Khazzam creates only one-of-a-kind, often custom pieces for a select clientele that values artistry over carat size. Many of her pieces are convertible, like the Bauble necklace she wears here (detail shown at left), which can also be worn as a bracelet. The piece comprises 11 motifs and includes gems like green tourmaline, kunzite, Baltic amber, blue topaz and emeralds. Top: This selection of Khazzam’s pieces includes, from left, her emerald Manza bracelet, aquamarine and diamond Nastasia earrings, brown jasper and diamond Martha stud earrings and multicolored-gemstone and diamond Penny eardrops. Story styled by Sarah Cave

Known for entirely one-of-a-kind — often bespoke — designs that take from a few months to over a year to produce, Khazzam has secured a place on a short list of contemporary jewelry designers who possess both technical fluency and authentic artistry. Her vibrantly colorful pieces are playful but crafted to exceptionally rigorous standards. And the sketches and paintings she produces in the course of her creative process are nearly as coveted as the fine jewelry she makes. 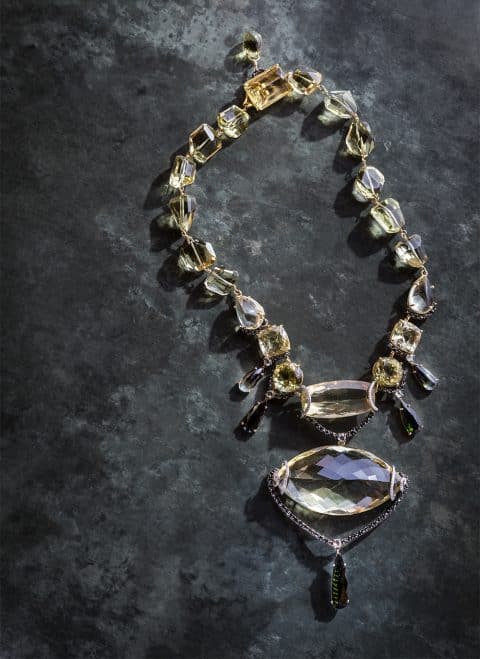 The lemon quartz, green tourmaline and diamond Melanie necklace comprises more than 500 carats of gemstones. The clasp is hidden behind an emerald-cut piece of lemon quartz trimmed with black diamonds and with a lemon quartz briolette dangling from it.

Her love of gems comes naturally. It’s a legacy she inherited from both her grandmothers, who treasured their jewelry and were never seen unadorned. “At first, I wanted to be a fashion designer, but I realized I couldn’t sew,” says Khazzam. “So, when I enrolled at FIT” — that’s the Fashion Institute of Technology in New York — “I studied jewelry. I’ve never regretted it.”

Her first professional gig after school was a far cry from her current intimate, ultra-exclusive operation. Khazzam spent three years as a designer in the New York City offices of jewelry retailer Zales. The company’s massive commercial operations were an education in themselves. “There was a huge diamond room, a wax model room, sorting facilities — all the buyers were there. And all I did all day long was draw. It was like jewelry school,” Khazzam recalls. 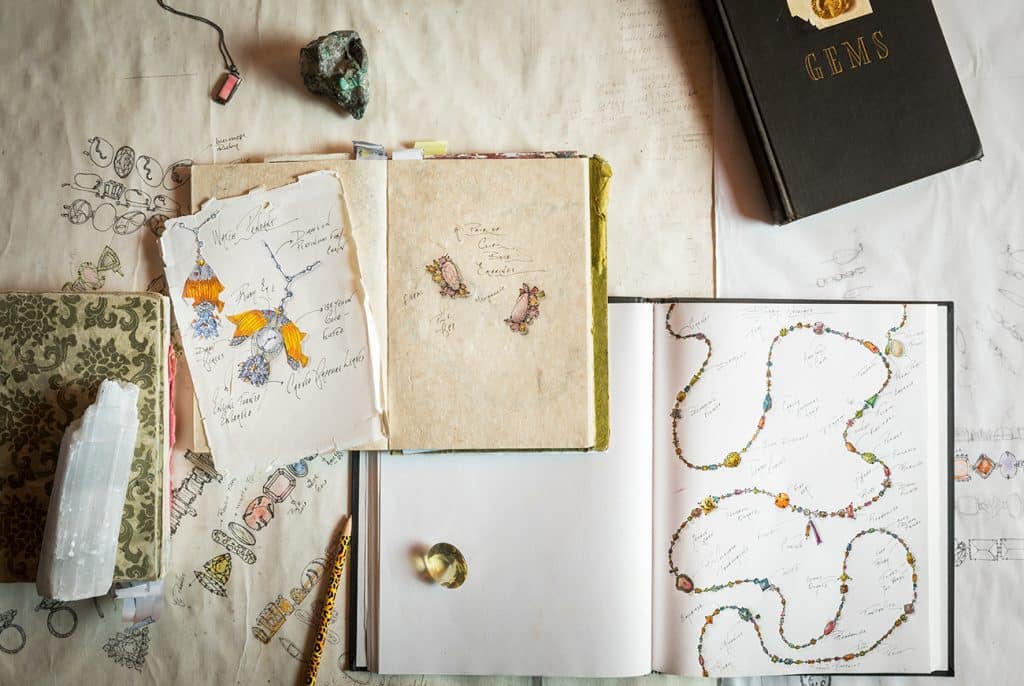 For each piece she creates, Khazzam makes precise to-scale drawings. The fish-shaped Angel pendant opens to reveal a watch.

From Zales, she moved to English heritage jeweler Asprey. Recognizing her talent (and desire for additional training) the house’s then-president, Robin Raw, dispatched her to apprentice at renowned jewelry manufacturing firm Carvin French. There, she worked alongside master jeweler André Chervin. “Nothing was ever good enough for him,” she recalls. “He taught me so much.” After a year, she returned to Asprey to design a collection each season. The position was ideal for a fresh talent with lots of imagination. “They liked that I was young and hadn’t been molded. I once did a necklace that was all frogs,” she says with a laugh.

When her first child was born, in 1993, Khazzam went out on her own, launching her namesake line. Asprey was an early booster of her work. The house’s New York boutique sold her debut collection, Stitch, including a gold ring with diamond-studded thread snaking around its perimeter. Before long, Barneys New York came calling. The luxury retailer stocked her work as she developed her signature style of jewelry with a relaxed attitude and unexpected, often asymmetrical combinations of diamonds and gemstones. 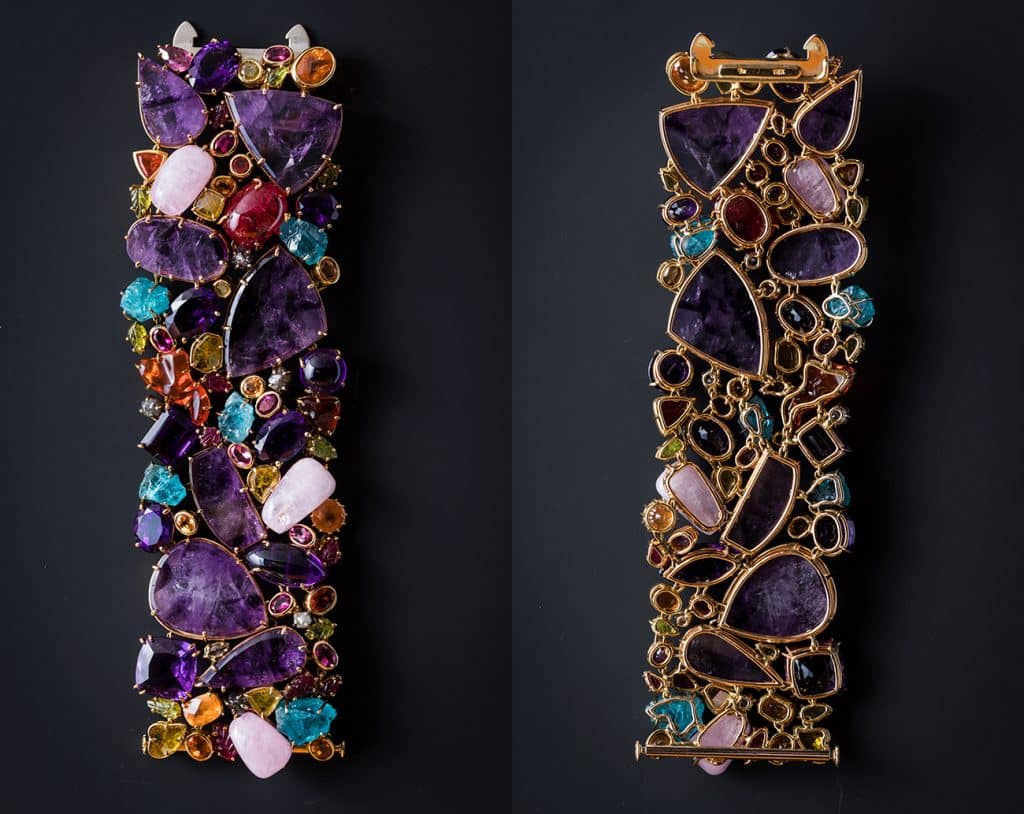 The Pandora bracelet, shown front and back, is composed of an array of gems, including large slices of amethyst, as well as blue apatites, rubies, peridos, fire opals, sapphires and more.

Khazzam has a decidedly un-snobbish approach to the stones she uses. Rather than sort them based on value, she’s guided by aesthetic concerns. “I group my stones according to color. It’s almost like a paint palette,” she explains. That palette is a sight to behold. Endless compartments of gems in every size, cut and color occupy a room of her atelier. A tray of yellow-toned stones contains sunstones and spessartites, faceted sapphires and citrine cabochons; elsewhere, “serious” Burmese rubies sit next to tourmalines and druzy. Similar variety exists for every hue. Khazzam has personally chosen each stone over the past two decades. “I have hundreds of thousands,” she says. “And if I picked one, it’s because I love it.” 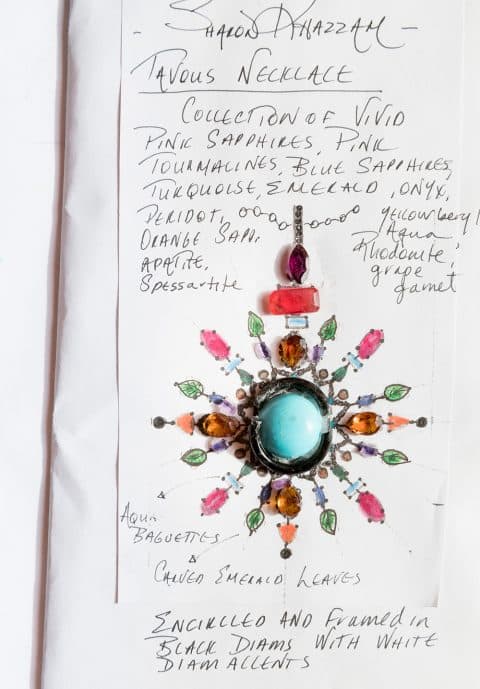 When Khazzam is designing a piece, like this necklace, she sketches it to scale and affixes gems to the drawing with wax.

She has a soft spot for unique gems, both those that are exceptionally fine — like an exceedingly rare star ruby that she currently cherishes — and less precious ones that will simply “never be seen again.”

“Some of the materials I work with aren’t expensive, but that’s not the point,” says Khazzam, who’s just as likely to rave about a pleasing sliver of jasper or limestone as a Colombian emerald. “I put certain stones together just because they work together. I don’t give myself limits. That’s how to create something — because you think it’s beautiful.”

Vivid color is another of Khazzam’s passions. “I love it. It’s about happiness,” she says, adding, “I’m not very good with a neutral palette.” When she does work with diamonds, she takes a nontraditional approach and is drawn to imperfect ones, as in a ring she crafted with an unusual kite-shaped solitaire as its centerpiece. More than a decade ago, she was in the vanguard of designing jewelry with diamond slices, formerly neglected because of their obvious inclusions and offbeat shapes. 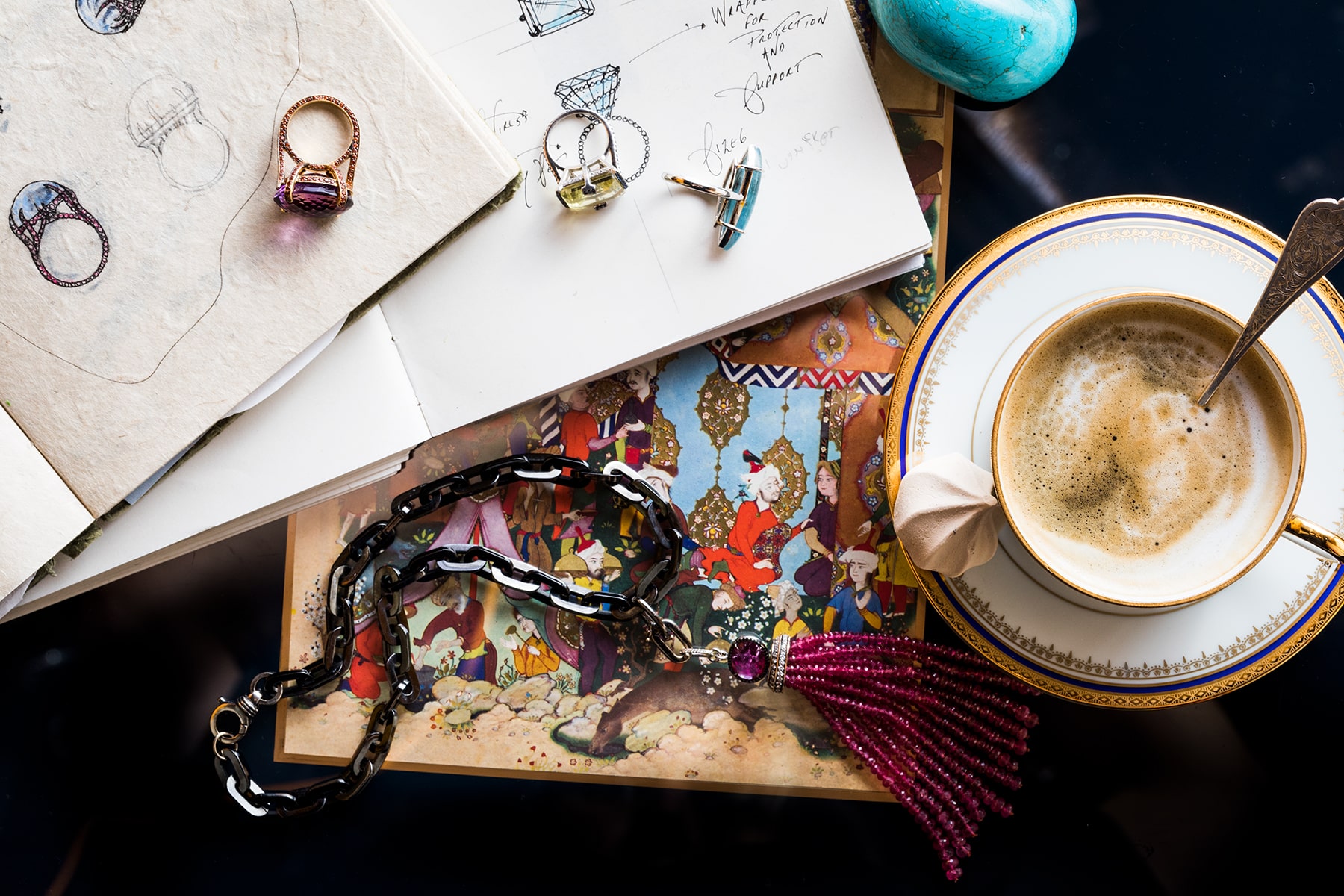 “My design philosophy has a common thread — versatile and wearable jewels, with a dash of whimsy, very often portrayed in movement,” Khazzam says. This array of jewels includes a ring with a 25-carat oval amethyst and a shank set with orange sapphires and a lemon quartz and blue sapphire ring.

Her vast array of stones isn’t merely the product of an acquisitive nature. Khazzam prefers to have materials at the ready so that she can immediately apply them to a design when the right client materializes. “I have to have stones to do my work, otherwise I would spend far too much time looking for them,” she explains. Her pieces seem engineered to generate joy. She’s fashioned an angelfish-shaped pendant concealing a watch, with a spray of carved emeralds for a tail; audaciously sized drop earrings set with a rainbow of gemstones; and bracelets that mix jewels of different shapes, cuts and colors with abandon. In addition to delectable gems, movement is a signal characteristic of her pieces, as in her playful Shimmee collection, which features fringes of stones that dance and shake in their mobile mountings. 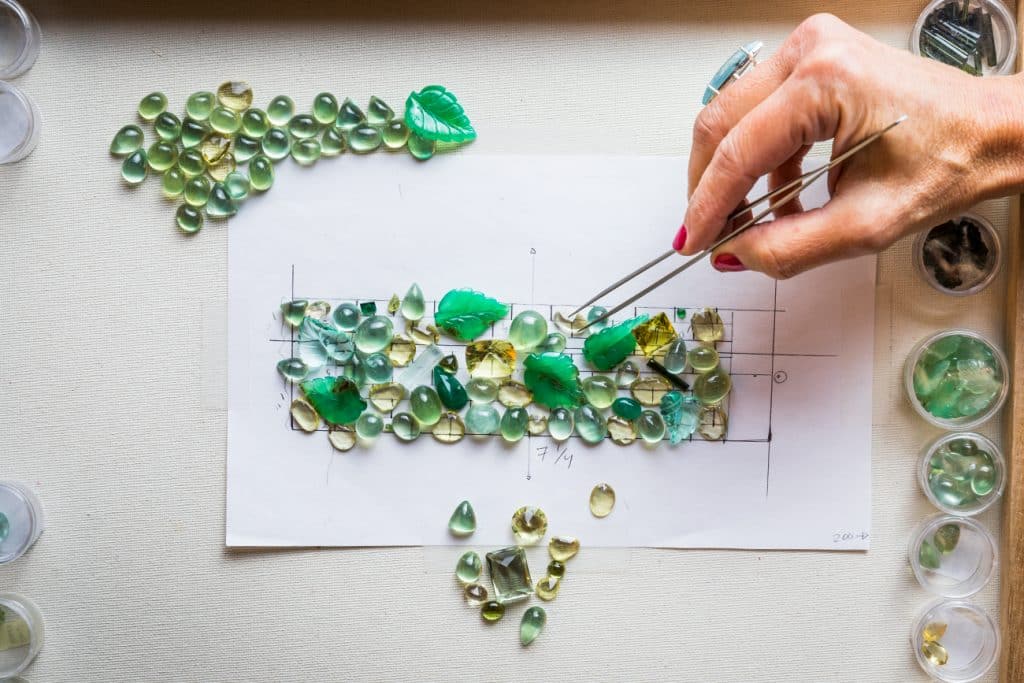 Here, Khazzam designs a bracelet, experimenting with different stones and placements until the piece feels right.

Khazzam’s clients aren’t interested in flaunting their status with jewelry. “No one asks me about how many carats a stone has. That’s not my client,” she says. “They’re not trying to show off their net worth to anyone.” She cites her signature Baby necklace, a multicolored length of precious stones in assorted shapes, as a case in point. “It’s an under-the-radar approach. It might be as expensive as a diamond rivière, but you can wear it to the drugstore. I don’t want anyone to just keep jewelry in the safe. Wear it every day and enjoy it.” 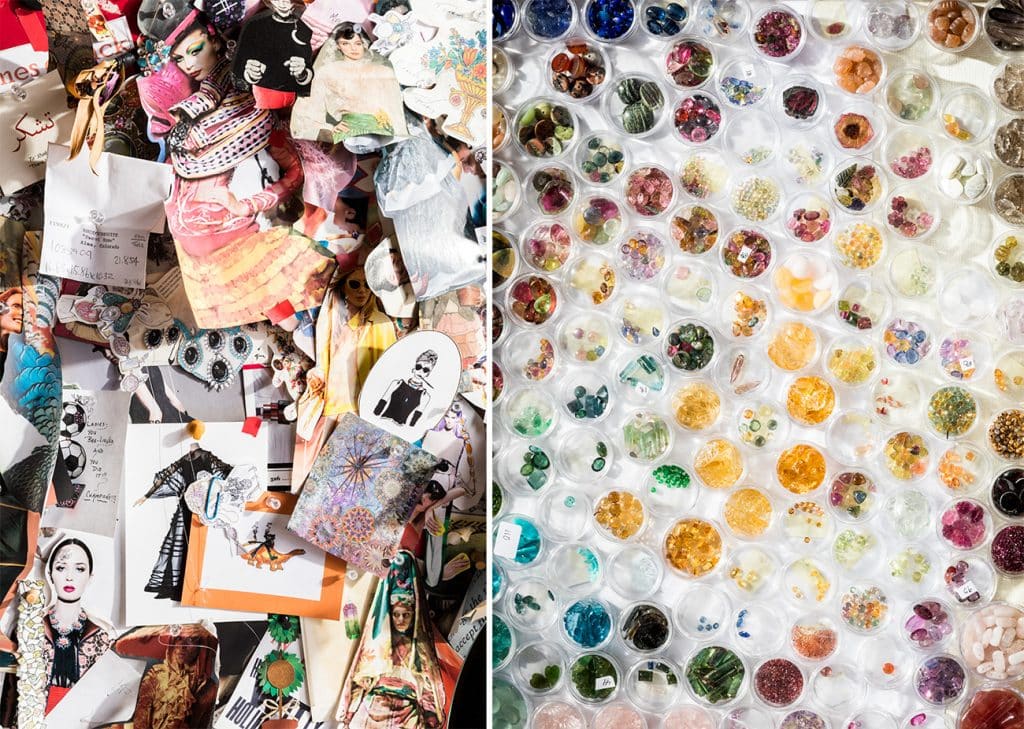 Left: Khazzam’s office features a colorful inspiration board filled with photos, patterns and sketches. Right: Her impressive collection of gems ensures that she’ll have the right one on hand when she needs it.

Another beauty of her design is that her pieces often transform in a multitude of ways. The drop of an earring might slide onto a gold-wire necklace. Or a bracelet might do double duty as a pendant with secret compartments that open and close. Khazzam credits a network of artisans — nearly all based in New York City — with executing her designs. “Having a jeweler make your piece is like a marriage. You have to insure that everything is communicated.” 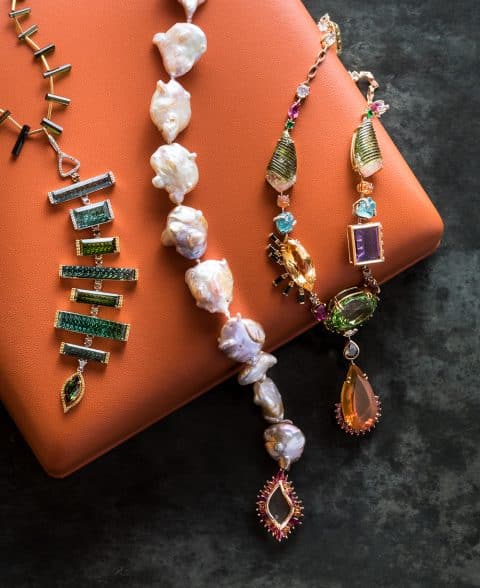 By making just one example if each design, Khazzam has the freedom to experiment. If a client likes a particular piece that has sold or is no longer available, she’ll create something for them inspired by the original. The Tori necklace, at right, features a 24.45-carat peridot from which is suspended a pear-shaped fire opal.

That’s where those meticulously drafted drawings come in. Every aspect of a design is accounted for in her sketches. She is constantly filling pocket-sized volumes with scribblings that serve as creative outlets and early blueprints for pieces that may one day make it to production. These compilations serve as informal working archives in ink where she records all her simmering design impulses and potential uses for stones that have captured her imagination. As a design makes its way to real-world jewel, Khazzam refines her preliminary drawings, designating places for every stone. She details the front, back and sides to exact specifications. Even the smallest deviations are not allowed. The finished piece should fit seamlessly within the outlines of the final drawing. The ultimate artistic treatment is reserved for her most exceptional pieces. Sitting at an easel in a corner of her studio, she renders them in gouache, a process that sometimes takes weeks. A handful of buyers who commission designs receive the completed images.

Khazzam’s attention to the minutiae of her work stems from her vision for its future. “A piece of jewelry is art that’s wearable. It’s going to outlive us all,” she says. “I want to be sure mine is something to be proud of.” 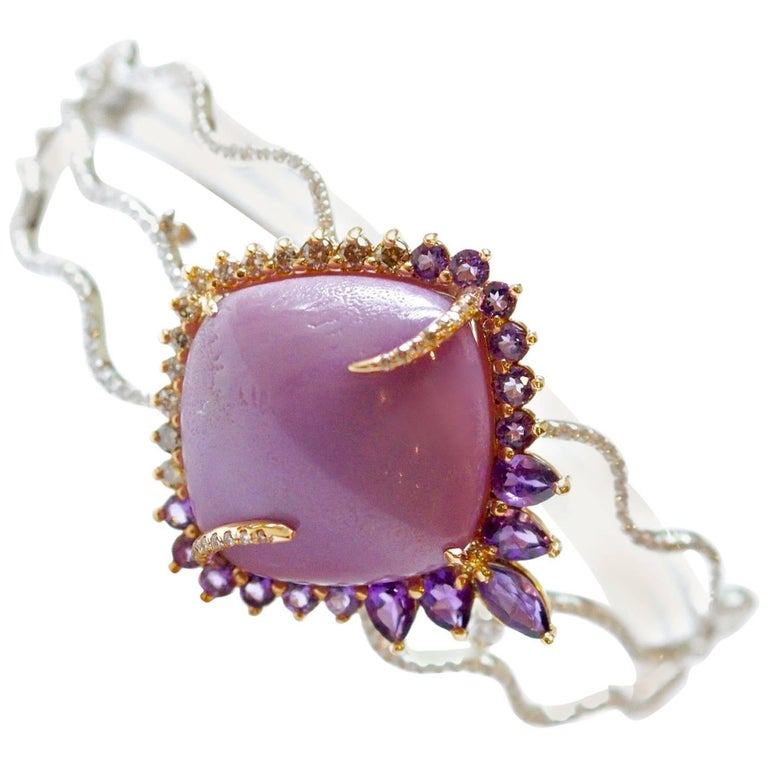 “It’s all about movement — shimmying diamonds on the waves of a diamond cuff with a removable top. The motif can slide off.” 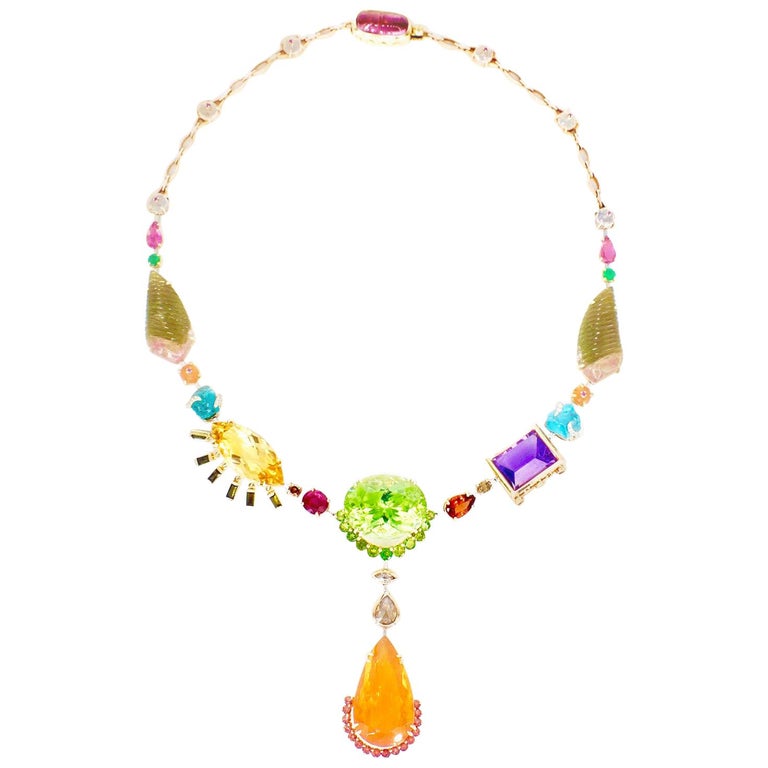 “It’s meant to be for a younger queen, with Victoria in mind, and Tori is a take-off on that name.” 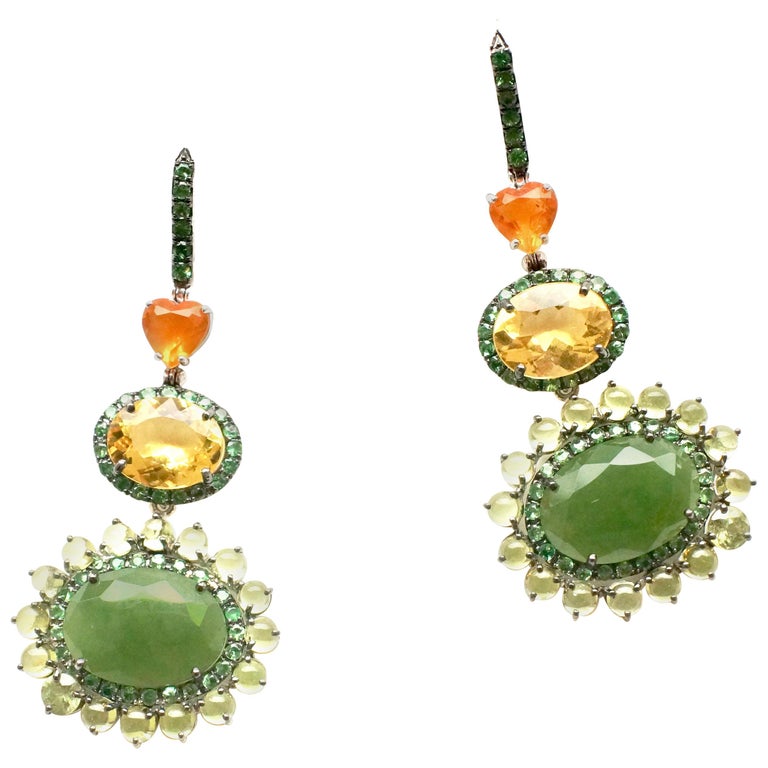 “These earring are a celebration of spring, depicted in the variation of colors, especially in the greens. They’re versatile; the bottom motif can be removed.”