Meet the Force behind an Architectural — and Philanthropic — Mecca 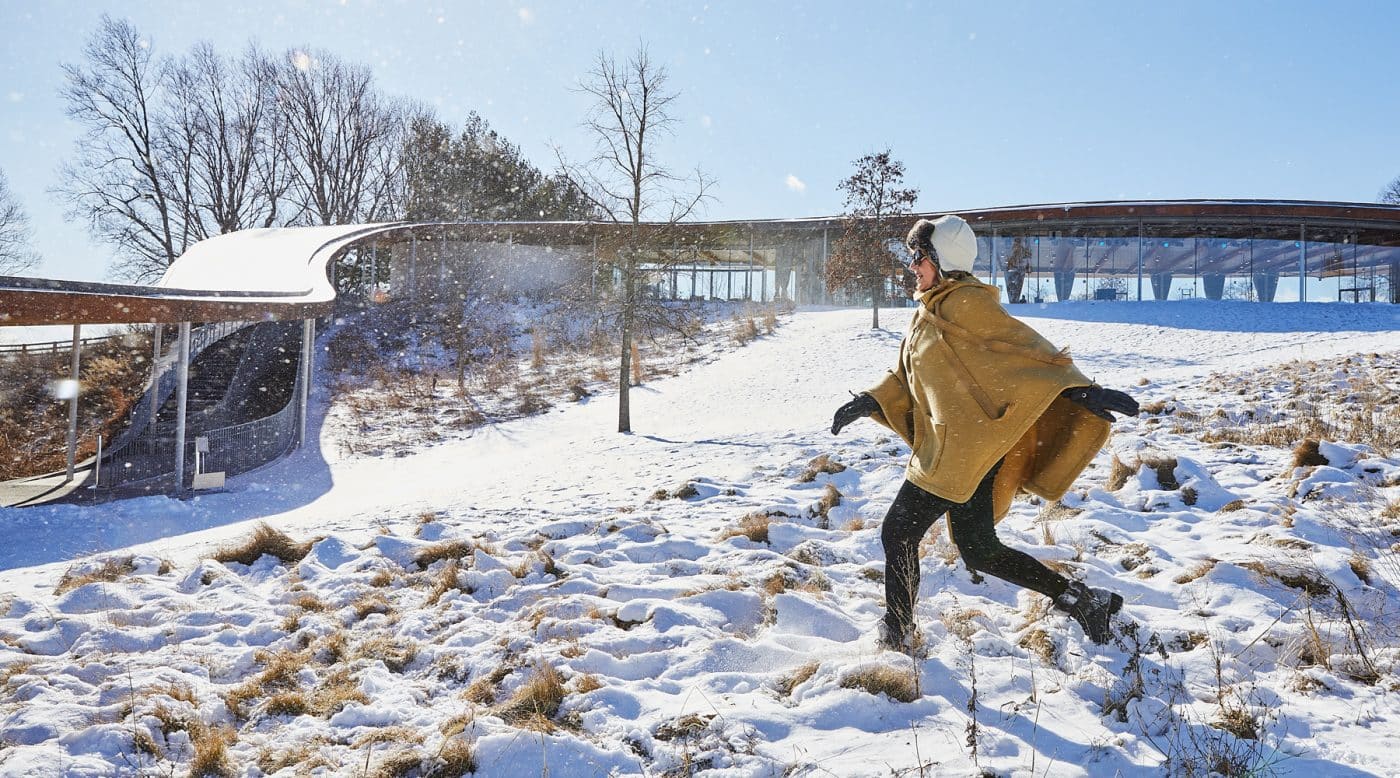 Sharon Prince leads the multiarmed nonprofit Grace Farms, based on a Connecticut campus designed by Pritzker Prize–winning studio SANAA, on missions devoted to nature, the arts, justice, community and faith.

March 20, 2022Sharon Prince has concrete plans like other people have stray thoughts.

Prince, best known as the founder and CEO of Grace Farms — the multivalent nonprofit that is also a New Canaan, Connecticut, destination for the public — ranks as one of today’s most innovative and dynamic philanthropists.

Armed with bullet points, Prince is happy to discuss the wide-ranging mission of Grace Farms, which opened in 2015. “Our five core initiatives are nature, the arts, justice, community and faith,” she says on a Zoom call, with the sun setting over Grace Farms’ sylvan 80-acre campus as a backdrop.

This venue has got to be the only place that stages cutting-edge dance performances and pastoral bird-watching events while at the same time hosting public programming that exposes violence against women in Africa. There’s a serene ecumenical chapel too.

To have tackled just one piece of the Grace Farms portfolio would have been a challenge, but Prince — who is married to the Bridgewater Associates hedge-fund executive Bob Prince — was after something far greater: a holistic, synergistic do-gooding operation that is a unique combination of the aesthetic and the moral.

As its mission statement states, “Our stake in the ground is to end modern slavery and gender-based violence, and create more grace and peace in our local and global communities.”

For much of the pandemic, the campus was not officially open, converted instead into a center for distributing both food and PPE — examples of community-oriented activities that are in keeping with its founding principles. (It fully reopened in September.)

The many functions of Grace Farms are performed from a campus designed by the Pritzker Prize–winning Japanese architecture firm SANAA. The segmented main building, called the River, is a memorably designed structure of glass and Douglas fir that curves sinuously down a hill, with a covered walkway connecting each of its component parts.

Prince, who has an MBA from the University of Tulsa, doesn’t believe in sacrificing style on the altar of progress.

“The elegance you associate with Grace Farms is very true to who Sharon is as a person,” says Yale School of Architecture dean Deborah Berke, a friend and colleague, who consulted on the interior design of Prince’s home and has collaborated with her on some key social justice initiatives.

Indeed, the people Prince chooses to work with are evidence of her forward-minded thinking — representing a commitment to collaboration that is perhaps not as impactful as her work to reduce global human trafficking but still aligns with her core belief that good deeds start at home.

SANAA is run by a woman, Kazuyo Sejima (who cofounded the firm with Ryue Nishizawa) — a fact that Prince points out as particularly pertinent now, since March is Women’s History Month. Her office chair is a special metal version of SAANA’s Rabbit Ear seat that was given to her by the architects.

“We wouldn’t have Grace Farms if we did not have women leading, and working, at the highest level of their craft,” she says, noting that women make up more than 60 percent of the Grace Farms leadership team, including “roles that are typically held by men, like our chief operating officer.”

It’s all part of her larger philosophy: that anything Grace Farms can do to move the world toward what she calls “equity and equality” is worth the effort.

And, of course, the most important role performed by a woman is that of founder, fulfilled by Prince herself. When reminded of that, she says simply, “Well, the good news is I can set the table any way I want.”

The table-setting metaphor is particularly apt since it implies — correctly — that Prince is inviting others to join her in the mission. She is, indeed, a prolific creator of partnerships.

“She’s picked brilliant people to collaborate with, and she lets them do their thing,” says artist Teresita Fernandez, whose work is featured both at Grace Farms and in Prince’s personal collection. “She trusts them.”

Site-specific works by women on the Grace Farms campus include Alyson Shotz’s circular metal sculpture Temporal Shift, Beatriz Milhazes’s colorful wall painting Moon Love Dreaming and Fernandez’s Double Glass River, which is installed in the Commons, the part of the River designated for dining and gathering.

The Fernandez piece is composed of 10,000 tiny glass cubes that reflect people and the landscape in a shimmering mosaic, and Prince sees it as embodying a fundamental insight: “The individual cube within the ten thousand other ones — it shows that we’re all connected. That’s why we do what we do.”

Prince has enlisted Berke to help with her latest project. DESIGN FOR FREEDOM, launched in 2020, seeks to eliminate modern slavery’s imprint on the built environment by removing forced labor from the building materials supply chain and construction industry.

Some of the statistics may surprise people. The Geneva-based International Labour Office, which publishes GLOBAL ESTIMATES ON MODERN SLAVERY, reports that 25 million people around the world are held in forced labor conditions, and the website of Design for Freedom notes that 75 percent of construction firms don’t have a payroll, meaning there’s opacity when it comes to workers’ status and compensation — or lack thereof.

For Prince, it’s a matter of enabling and popularizing clean sourcing in architecture and design, and she sees a promising parallel in the culinary and fashion worlds.

“Think about it. First it was food,” she says, referring to the decades-long push for local, sustainable and ethical eating, as well as reliable sourcing and labeling. “Then came clothing. I’m proposing that shelter will be next.”

One of Design for Freedom’s first initiatives was to generate a sort of sourcebook of ethical makers and vendors, focusing on those that don’t use child and forced labor. “We had to create that list,” she says, explaining that it includes “common building materials that run through every project: timber, stone, brick, steel and more.”

The organization is currently a partner on four pilot projects — including a Serpentine Pavilion in London designed by Theaster Gates and David Adjaye — that will serve as models of transparent sourcing by using materials unsullied by problematic labor practices.

On March 31, Prince will hold the first-ever Design for Freedom summit at Grace Farms — “not a conference, because conferences are just for talking,” she says, always favoring action over mere words.

The daylong event will feature panels with top designers, construction company executives, academics and government officials. The Design for Freedom Tool Kit, being released for the summit, contains resources to help people make decisions about who they hire and what they buy.

Prince is actively using philanthropy to insert the topic into academia too. “At Yale, Sharon provided initial support for a new joint course between the architecture school and the law school that traces the role of forced labor in the building supply chain and seeks to eradicate it from the architectural design process,” Berke explains, emphasizing, “Sharon is shaping future leaders in the field.”

If you ask Prince what she does for fun, she is briefly taken aback.

“That’s very funny, because I’m not known to relax,” she says, noting that all manner of outdoorsy activities, from ATV riding to hiking and marathoning, are part of how she enjoys life — hence the nature-center aspect of Grace Farms, which includes a variety of walking trails.

It makes perfect sense that her previous venture was bringing the Icelandic outerwear company 66 Degrees North to the United States. (She later divested from it.) “I’ve had an entrepreneurial ethos from the beginning,” she notes.

When it comes to fashion and jewelry, Prince remains true to her principles, favoring sustainability oriented designers like Loro Piana and Monique Péan. She also patronizes the outerwear company Patagonia, known for its commitment to supply-chain transparency.

The Princes live close by Grace Farms, on a property that includes a modern farmhouse-style home and a late-18th-century barn, allowing them to keep horses and donkeys.

But Prince’s attention to detail and thoughtfulness will always be most focused on the larger missions of Grace Farms, which require a steady effort that she is more than willing to apply.

As she puts it, “Our velocity for good has been established day by day.”

Browse Works by Creators Featured in This Story