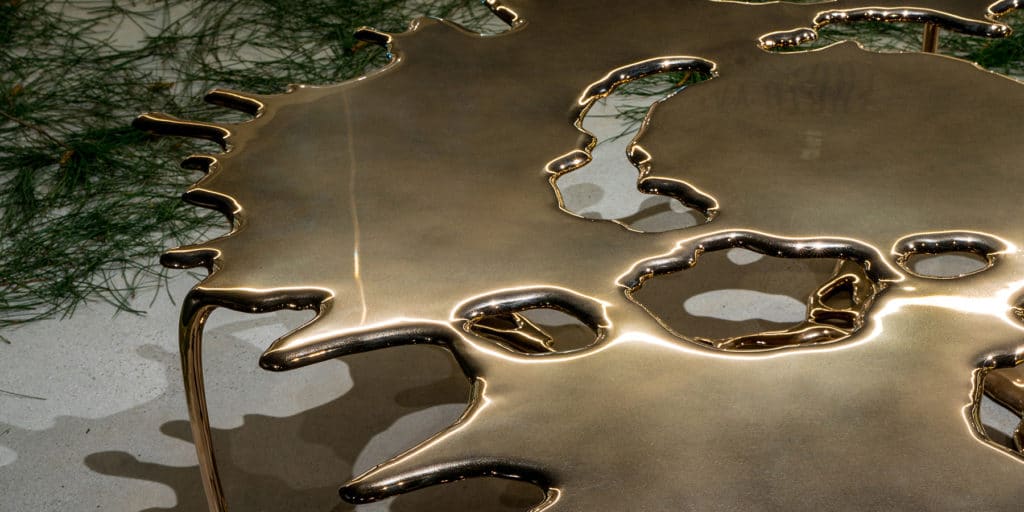 If the Angeleno’s undulating furniture and sculptures resemble dream creations, that’s because they are — and they're now on view at L.A.'s Furth Yashar &. 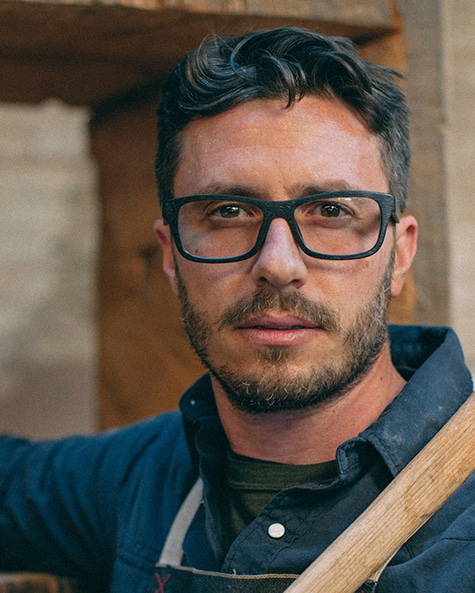 May 8, 2017Los Angeles artist Stefan Bishop is the subject of Furth Yashar &‘s inaugural show, held at the Pacific Design Center. The roving gallery was recently founded by interior designer Oliver M. Furth and his partner, Sean Yashar, a decorative arts brand consultant and manager. Devoted to displaying contemporary works that sit at the intersection of fine and decorative art, it will have different locations for future shows. Top: Bishop’s Magnum Opus table, 2015. Photos courtesy of Stefan Bishop, unless otherwise noted

Running your hands over a Monterey pine coffee table by Los Angeles artist Stefan Bishop, you feel an immediate connection to the wood’s history, its ridges marking the passage of time. In the case of his skyscraper-like “monolith” sculptures, the Douglas fir he uses is sometimes more than 400 years old; Bishop crafts the pieces from beams recovered from a Portland warehouse built in 1901, centuries after the trees sprouted from the ground.

Those monoliths, along with tables made from elm, pine, walnut and bronze, are on view now through May 12 in a solo show mounted by Furth Yashar &, in West Hollywood. Solely dedicated to collectible 21st-century design, the roving gallery is the new passion project of interior designer Oliver M. Furth and his life partner, Sean Yashar, founder of the Culture Creative, a decorative-arts-focused brand consultancy and management agency. Fixtures of the L.A. design community, they say the ampersand at the end of their gallery’s name is a call for collaboration. In this, their inaugural show, held at a space in the Pacific Design Center, their collaborator is Cristina Grajales, the New York design powerhouse who represents Bishop.

“Stefan’s work is beautiful no matter where it is,” says Yashar, who planned the show to coincide with this year’s Legends of La Cienega, an annual event celebrating the dealers and galleries of L.A.’s La Cienega Design Quarter and the creators they exhibit and represent. “If it’s in a showroom mixed with vintage pieces or in a residence, it is still going to shine. But in a space like this, he gets to tell his story, to be given the same respect that is given to contemporary fine art.”

Furth and Yashar conceived the gallery, which doesn’t have a standing collection nor a permanent roster, to present designers in the same way other spaces host painters and sculptors. There is no showroom floor, no mix of contemporary and vintage pieces, no California eclecticism. The focus is on artists who bridge the gap between fine and decorative art, with Bishop the gallery’s debut example of this chasm-spanning group. 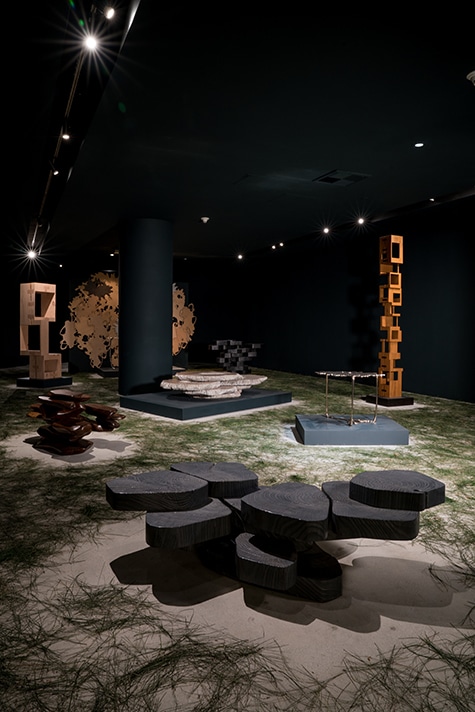 Titled “Powerful Tenderness,” the show is on view through May 12 at Furth Yashar &’s current space, in the Pacific Design Center. Photo by by Minh T.

Bishop made his initial monolith at California College of the Arts during his one year of university education, in the mid-1990s. He found some blocks of fir outside the wood shop and hid them behind a dumpster, later hacking away at them with a hammer and chisel.

“I really don’t know where that first one came from,” he says, although it probably had something to do with his childhood in the Oregon countryside, growing up in an idyllic setting with hippie parents. His father was a lumberjack, complete with bushy beard and suspenders, who also fought forest fires. The family lived on a good chunk of acreage with goats, chickens and bees.

“I was basically naked in the woods all day long,” he says. “My parents would make me put on sandals.”

Bishop started school late, after his family moved to Eugene, Oregon, which they soon left for Boulder, and he describes the transition from country life as traumatic. To this day, he has recurring dreams in which he’s navigating complex industrial spaces. He’s not running or searching, just finding his way through them, trying to figure out their unnerving topography.

After leaving school, Bishop apprenticed with furniture makers in Berkeley, California, and Chicago. From there he moved to L.A. and got a job in the engineering department of a big furniture manufacturer. He had decided he wasn’t a creative, so he left behind the wood shop and stuck to CAD drawing.

A few years later, having made some money selling his house in Montecito Heights, he got into real estate and embarked on the typical cycle for a property investor in the early 2000s: boom, boom, boom, bust. In the course of one year, Bishop went from owning several gorgeous homes to living in a studio apartment, all while dealing with a divorce. “It was an epic midlife-crisis crash,” he says. “I lost everything.”

“I was basically naked in the woods all day long,” artist Stefan Bishop says of his idyllic Oregon childhood. “My parents would make me put on sandals.” 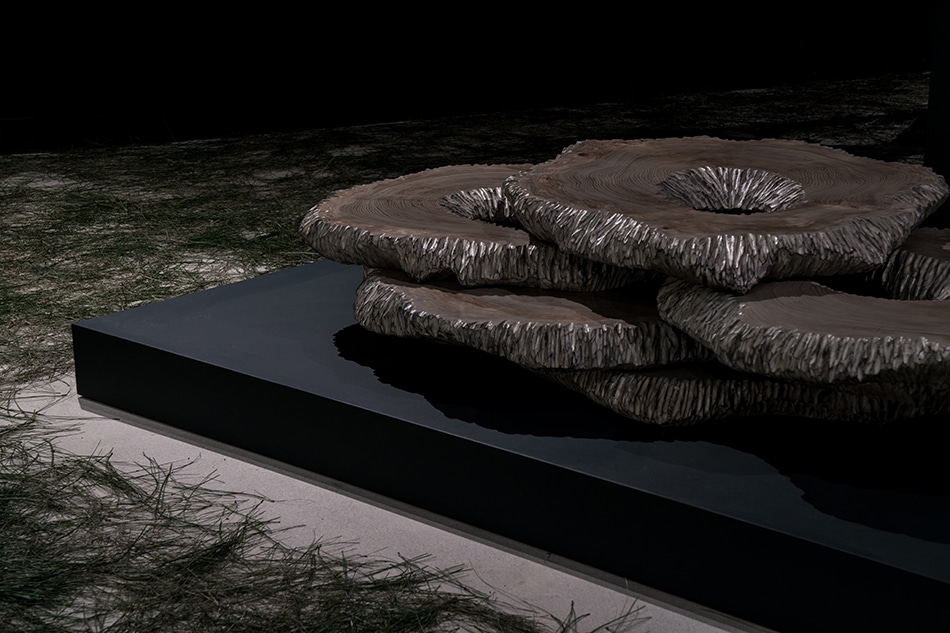 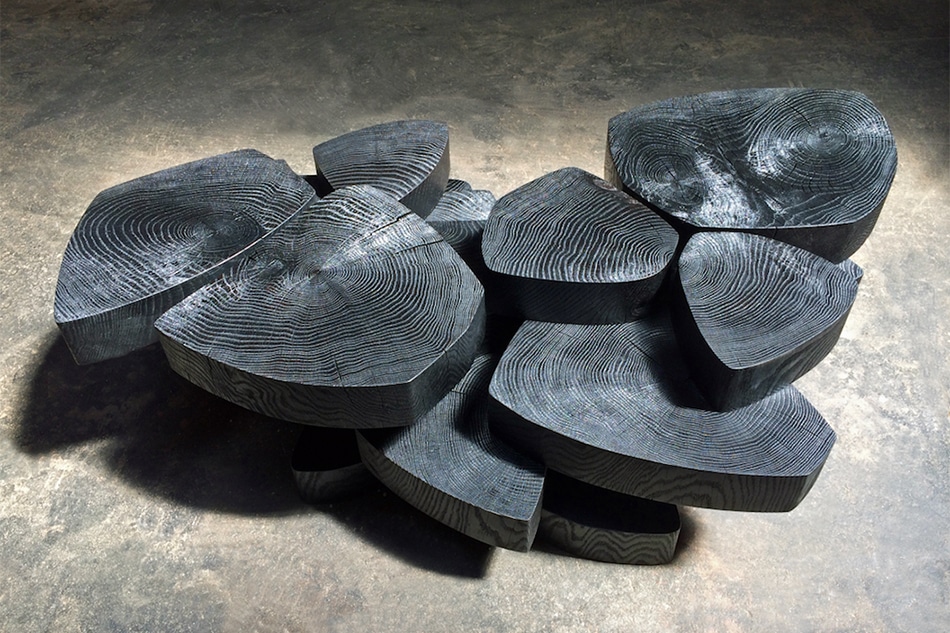 The textured surface of the Monterrey pine composing the Ring coffee table, 2016, reveals the age of the wood Bishop used to make it. 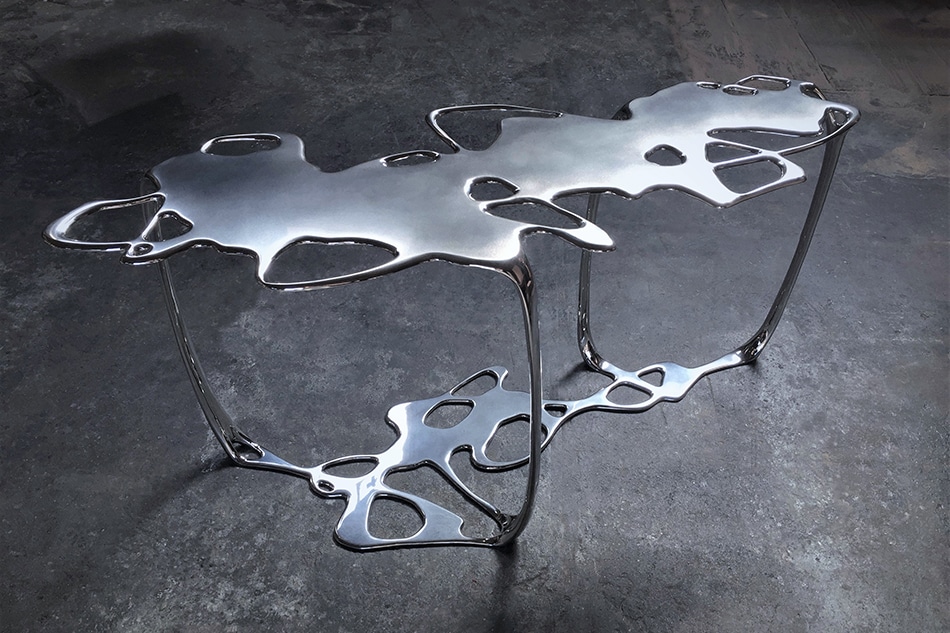 Available in an edition of six, the Splash console, 2016, is made of stainless steal. 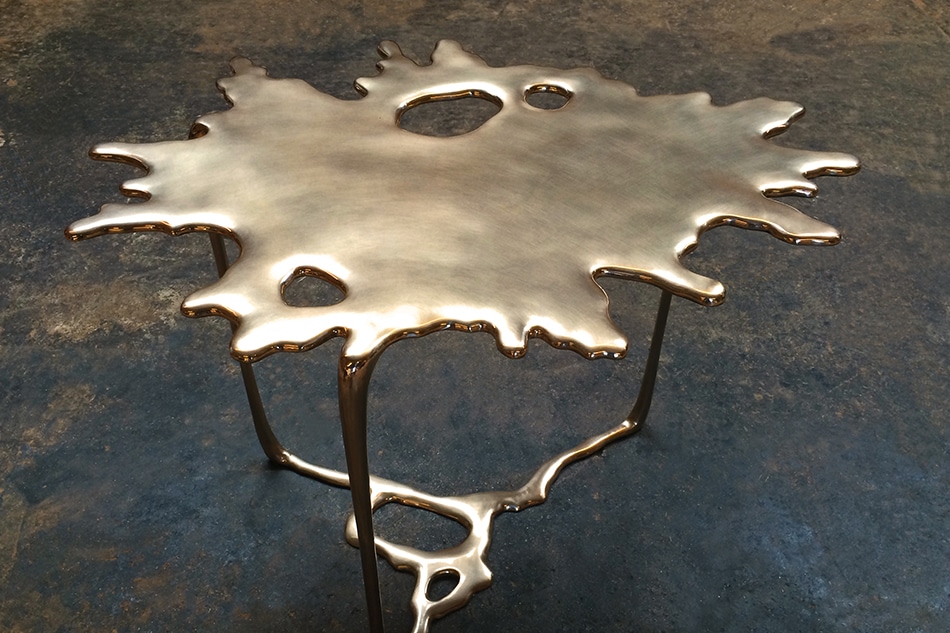 Part of a series of bronze pieces that came to Bishop in a dream, the Puddle side table, 2015, mimics the fluid shapes formed by ink the designer spilled on the floor of his studio. 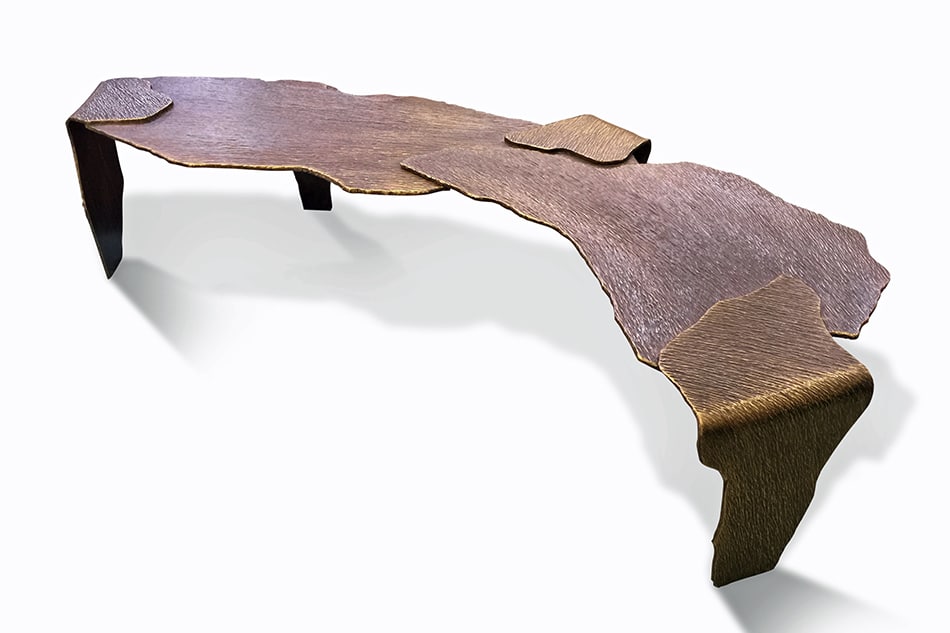 Bishop made only one hand-textured Mantle bench, 2017. 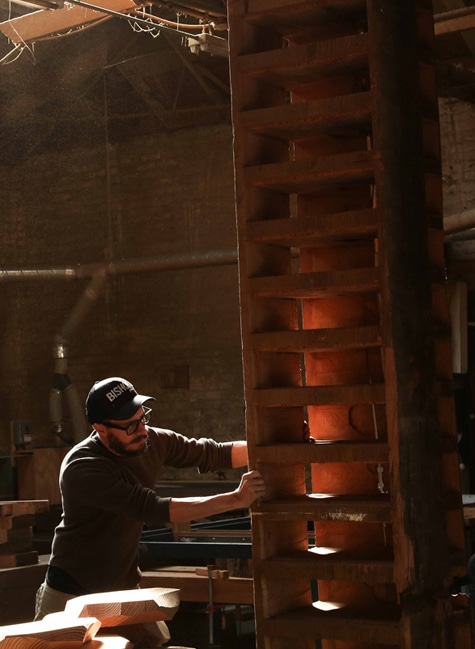 Bishop works out of a warehouse-like studio next to an auto shop in L.A.’s Glassell Park neighborhood.

Bishop drifted, working odd jobs. Eventually, he moved into a place with the woman he describes as the love of his life. One evening when she was out of town, he was overcome with images and felt his brain firing as it hadn’t in years. He stayed up all night drawing and drawing. “When I have ideas,” he says, “those moments are like sex.”

Three months later, he rented a studio next to an auto shop in Glassell Park and got to work. That was five years ago, long after he’d abandoned the idea of becoming an artist.

Today, the back of that studio holds a half-dozen monoliths bathed in natural light. The arrangement makes for a surreal cityscape, a scale model of the urban topography of his recurring dreams. Elsewhere in the studio are tables crafted from sections he’s removed from salvaged beams, the wood’s concentric rings offering an alluring metaphor that even a child could understand.

“The wood Stefan finds really dictates what he creates. He’s a very deep, profound person, and you can feel the hand behind the work,” says Grajales, who first met Bishop a few years ago and immediately realized he’d be a natural fit for her roster of artists. “From the minute we saw his pieces, we were totally in love with him,” she continues.

Bishop’s shiniest pieces are his Puddle tables: bronze sculptures cast from molds made of wood. These creations also came from a dream, when a long night in the studio ended in a nap on a workbench. He awoke with the image of a puddle seared into his brain, and he poured ink all over the floor of his studio, watching the way the dust helped the liquid pool together. He took hundreds of pictures of the beautiful mess and made an equal quantity of drawings before figuring out the shapes he wanted for his plywood prototypes.

“This is a labor of some kind of love,” he says. “It’s not easy labor either. It’s all really tricky, sometimes with wood chunks flying in your face.”

Even with all the work and all the love he puts into each of these pieces, it’s still the wood that takes the lead in determining his designs, the richly grooved pine and elm transformed into otherworldly objects that remain true to the earth from which they grew.