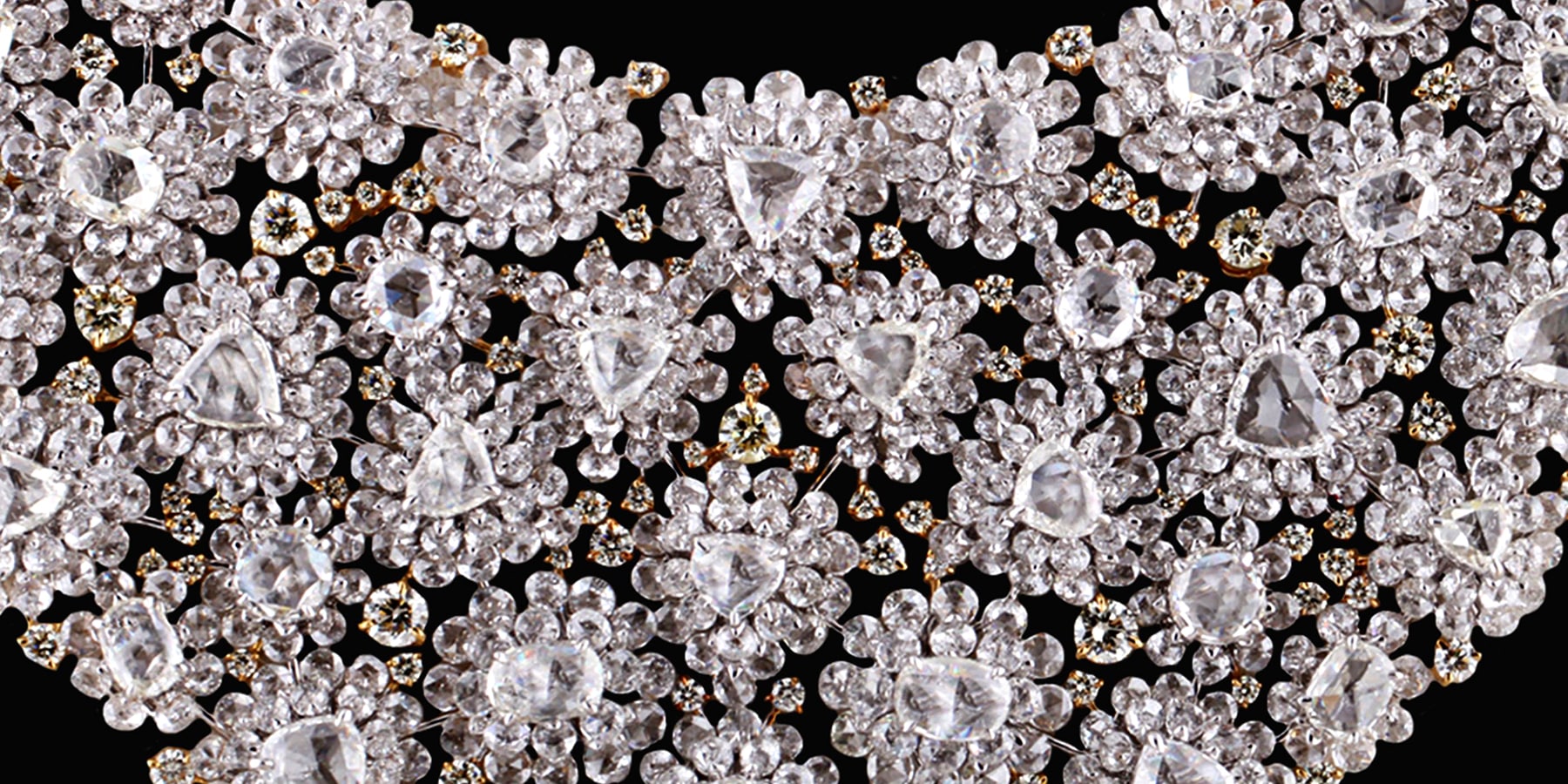 For Dheeraj, Niraj and Anuj Menda, of Studio Rêves, working with rare, precious gems is a family tradition.

One might expect a company with the name Studio Rêves (the French word for “dreams”) to be an upstart couture operation located somewhere on Paris’s Right Bank. But although its handiwork is very haute, Studio Rêves is not French, nor does it produce runway fashion. Rather, it is a Mumbai-based jewelry brand founded by a trio of brothers: Dheeraj, Niraj and Anuj Menda.

The Menda brothers are as susceptible as anyone to the charm of a Gallic turn of phrase, and when the moniker was suggested by their first customer — a family friend who studied French and is now Niraj’s wife — they realized that it encapsulated their mission nicely. “Studio Rêves was a dream for the three of us,” says Niraj. “We want to make jewelry dreams come true for our clients.”

The Menda family has been involved in the jewelry business for generations. The brothers’ grandparents were gem traders in Jaipur and subsequently traded diamonds in Mumbai. And the two elder Menda brothers, Dheeraj and Niraj, learned the ropes of the family business. “We received full training in everything from rough assortment to polishing to the final sale of the stones,” says Niraj.

The three brothers, however, were less intrigued by trading diamonds than by the possibilities of creating jewelry with them. “We’ve always had a creative inclination,” Niraj says. So in 1998, they formally joined forces under the Studio Rêves name.

Small commissions from their social circle — engagement rings, personal gifts — constituted the bulk of their early projects. The brothers’ design skills developed in tandem with a talent for technically challenging manufacturing. Before long, they had begun creating jewels for other companies as well as their own, with a roster of clients in India and beyond, including New York and Dubai.

What started as a staff of four (the three brothers and their mother, Renu) working out of Niraj’s bedroom is now a team of 200. Each brother has a defined role: Dheeraj, the eldest, is CEO; middle brother Niraj, the creative director; and the youngest, Anuj, CFO.

Studio Rêves’ standout talent is “bringing out the best of each stone,” says Niraj, who takes the lead in selecting gems for the studio’s signature collection. Diamonds are his prime focus, and standard shapes and cuts are of little interest to him. “We want diamonds that are not regularly cut. That’s where we can create magic.” It helps to have family connections providing access to a steady diamond supply. “We’re lucky,” he says. “We get our pick of the special things we’re looking for.”

Niraj finds the rose cut, which originated in the 16th century and is characterized by triangular facets and a flat bottom, especially captivating. A stone with this shape exhibits a “natural luster and light that is the pure diamond,” he says, pointing to the relatively small number of facets of a rose-cut stone compared with a contemporary brilliant-cut one. “You’re able to see the essence of a natural diamond.”

Endowed with this collection of unique diamonds, Studio Rêves focuses on creating one-of-a-kind designs that best highlight each one. The process sounds almost mystical. “I have to connect to a stone,” Niraj says. “That leads the way to a design. Without that, any design will feel cookie-cutter and formulaic.”

Although Niraj has the title of creative director, he doesn’t monopolize design duties. The studio’s approach is ego-free and collaborative. “We believe only in teamwork,” he says. “Studio Rêves isn’t a single person — it’s a collective where people come together to practice their art.” Niraj shares with his team the chord he wants to strike with each stone. From the preliminary sketch to the final product, artisans refine the work to realize his vision.

The collaborative effort leads to an enchanting diversity among Studio Rêves offerings. These range from elaborate, oversize stud earrings in an eight-pointed-star formation reminiscent of Mughal design to a contemporary halo engagement ring with a yellow marquise diamond at its center to modern rose-cut diamond hoops with a coiling, organic shape. Every piece, regardless of its destined use or price point, receives the same level of painstaking attention in the workshop, whether it’s a pair of office-appropriate diamond drops or a diamond bib necklace for a formal wedding. No aesthetic dominates. Instead, the brand is single-mindedly committed to optimizing the potential of its materials.

One creation that exemplifies Studio Rêves’ technical virtuosity and skill at showcasing specific stones is a serpent-shaped diamond collar stewarded by Dheeraj. Nearly 2,000 marquise-cut white diamonds (weighing almost 69 carats in total) were individually prong-set in white gold to form a mesh that was then affixed to a springy white gold “skeleton.” The show-stopping finished product is a lifelike snake — albeit with an electric sparkle emitted by its jeweled skin — that drapes casually around its wearer’s neck.

Niraj is unworried about the hundreds of hours and the astronomical resources required to perfect each design. “We make our jewelry to express an emotion and challenge ourselves with new innovations,” he says. “The budget will be what it will be.” 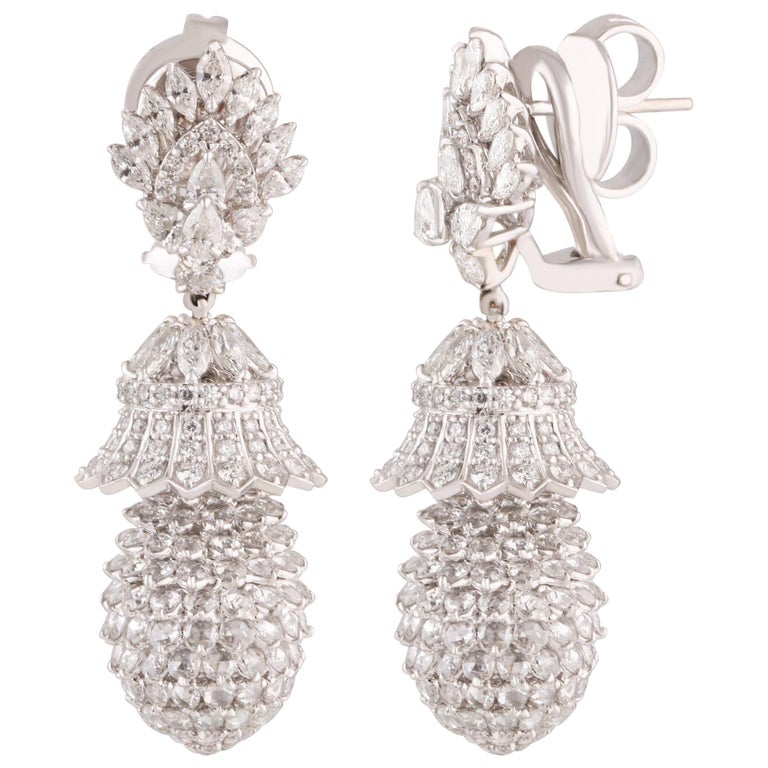 “Dazzling and shining, these pineapple-shaped earrings are making a statement in eighteen-karat white gold, featuring 9.82 carats of round rose-cut diamonds, brilliant-cut rounds, pears and marquise diamonds in prong settings. This pair is a standout-charming addition, executed by a unique diamond setting.” 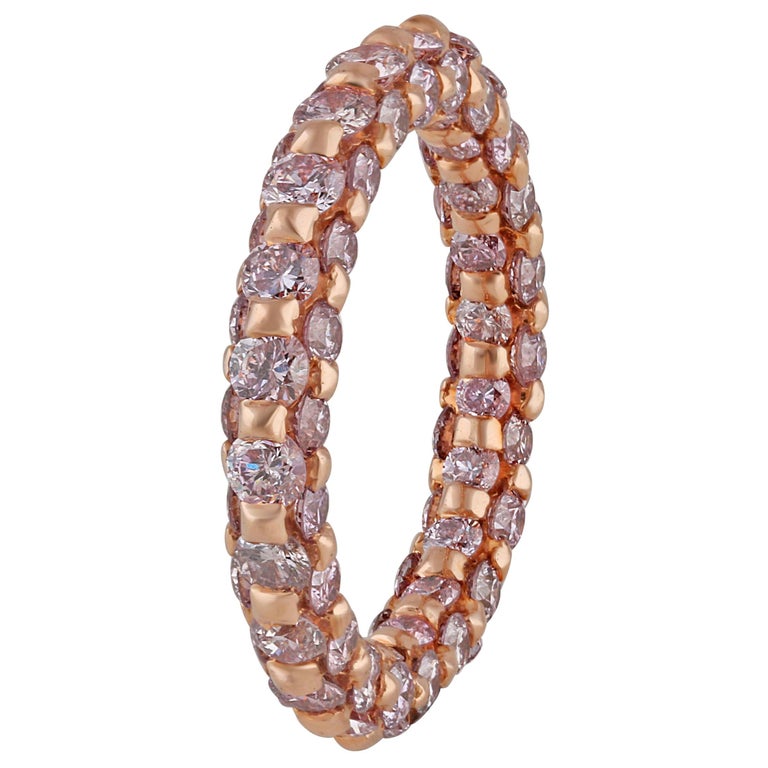 “This luxurious band is fabricated in 18-karat rose gold, featuring 4.03 carats of pink diamonds. What is unique about it is that diamonds encircle the band 360 degrees, so it is studded with stones all over.” 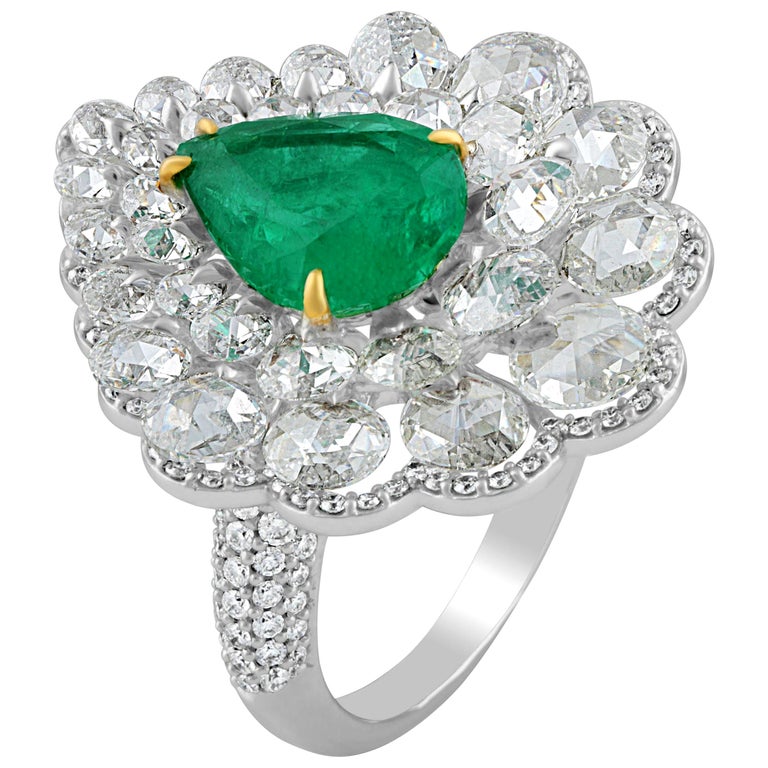 “In this piece featuring brilliant-cut diamonds in an 18-karat white gold base, we take the classic emerald and diamond combination and spruce it up with an unconventional design sensibility.” 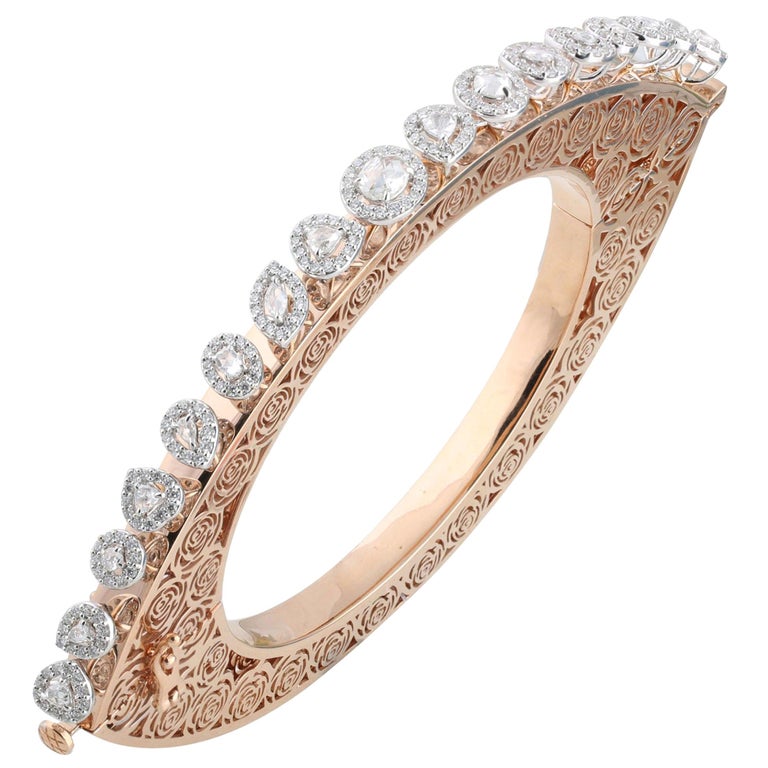 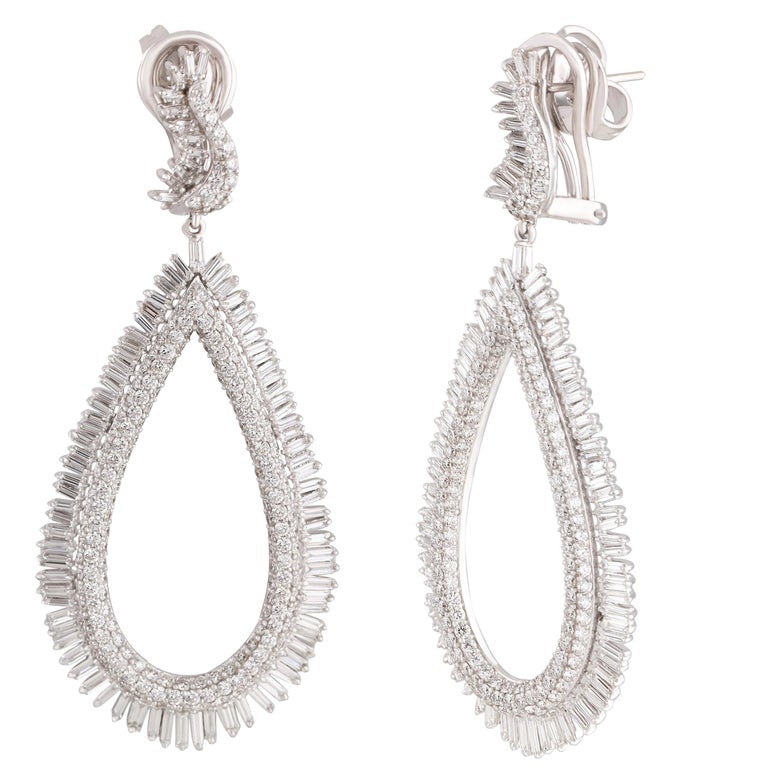 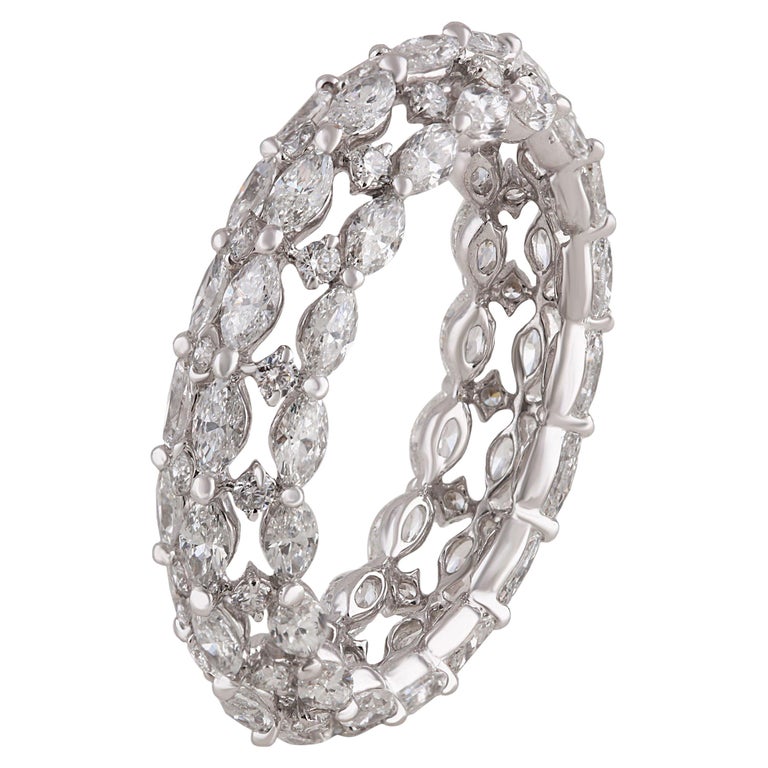 “Some forms are best defined with gaps.”