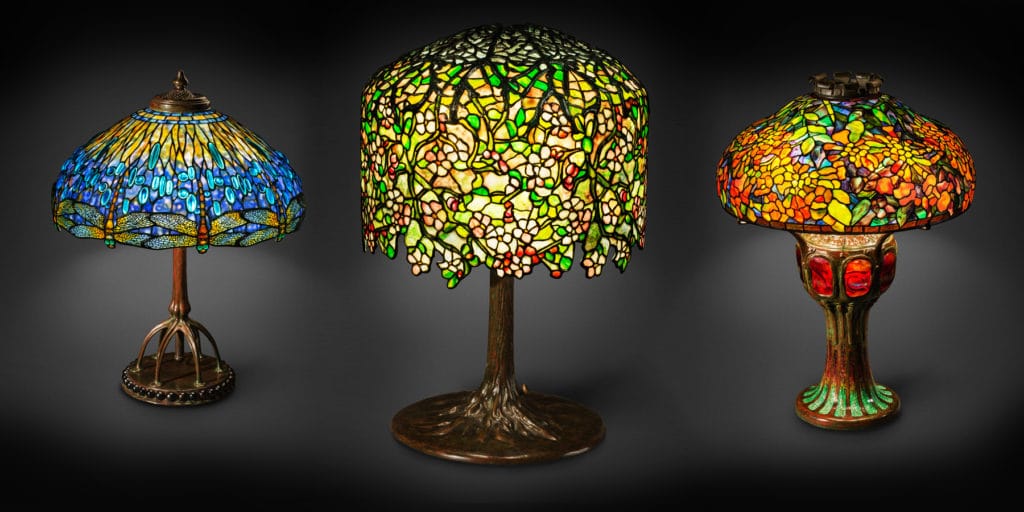 The backstories have backstories in the mesmerizing mix of aesthetics, politics and technology that is the new permanent gallery of Tiffany lamps on the Upper West Side. 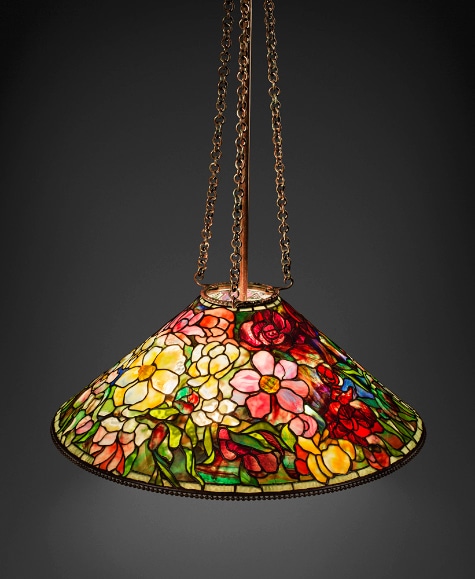 Thanks are due Dr. Egon Neustadt, an Austrian-born orthodontist, and his wife, Hildegard, a pair of Depression-era newlyweds looking to furnish their Queens, New York, apartment on a budget. Were it not for them, the New-York Historical Society’s encyclopedic new 4,800-square-foot gallery, which showcases 100 shimmering leaded-glass lamps made by Tiffany Studios in the first decade of the 20th century, would not exist.

In 1935, the young couple spotted what they called a “strange, old-fashioned” lamp with a daffodil motif in a Greenwich Village second hand shop and bought it for $12.50. By then, such lamps had fallen far out of fashion, and Tiffany Studios had been shuttered just two years earlier. But that find sent the Neustadts on a quest to amass as many as they could of the hand-crafted kerosene and early electric lamps, which now rank among the world’s most coveted decorative objects.

Just before his death in 1984, Egon bequeathed the entire collection of 132 lamps to the NYHS, which for decades displayed parts of the collection on a rotating basis. Now, as part of a $35 million transformation of the society’s fourth-floor galleries, which opened to the public earlier this spring, the renowned London-based Czech architect Eva Jiričná has created a softly glowing, bi-level Tiffany-lamp wonderland. Impressively engineered with a floating glass staircase, it contains curvilinear wall cases and freestanding vitrines offering 360-degree views of the opalescent lamps in both iconic and rare iterations. Here, you can see in one place a Dragonfly (originally designed in 1899) with bronze filigree wings and gleaming glass eyes, Wisterias (designed in 1901) in several different colorways, a rare Dogwood floor lamp (circa 1900-06), an elaborate cobweb shade on a Narcissus mosaic base (circa 1902) and scores of other examples. The cumulative effect is spellbinding. 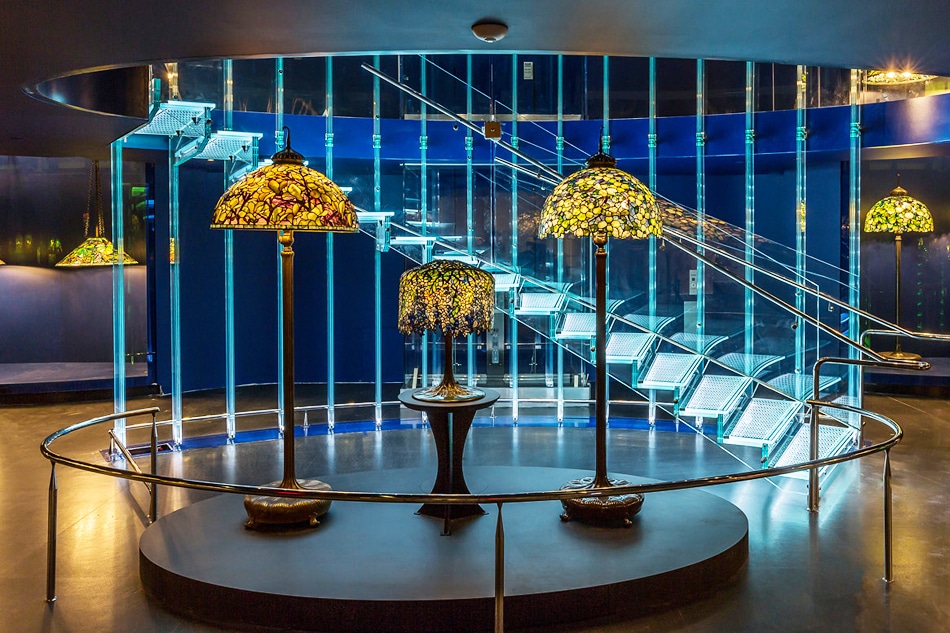 Architect Eva Jiričná, who is known for her iconic glass staircases, designed the Gallery of Tiffany Lamps, her first New York museum project. Photos in this slideshow by Corrado Serra 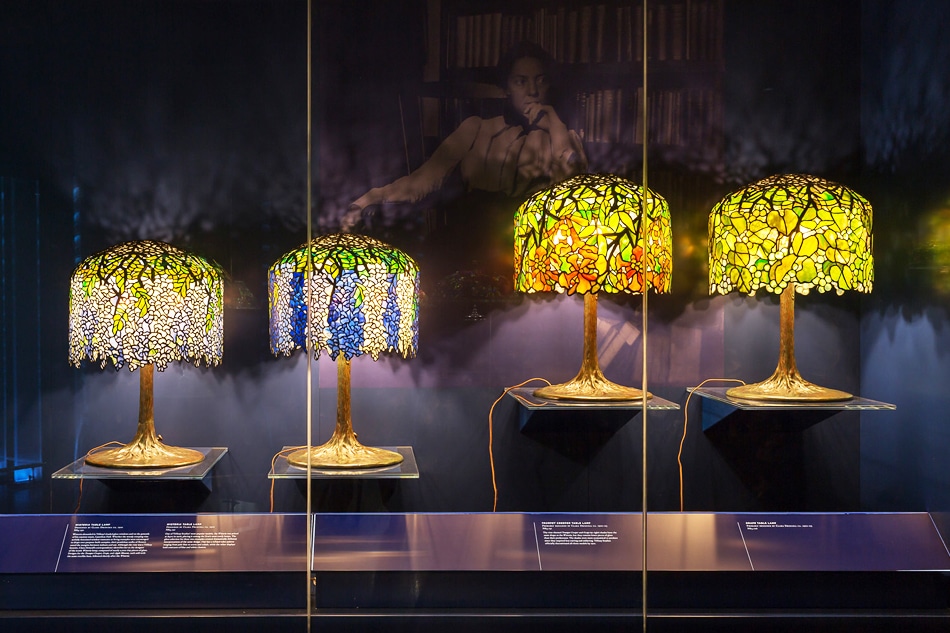 In 2005, two Tiffany scholars discovered Clara Driscoll’s correspondence, which helped them uncover the previously unknown role of Driscoll and her Women’s Glass Cutting Department in designing and creating Tiffany lampshades. 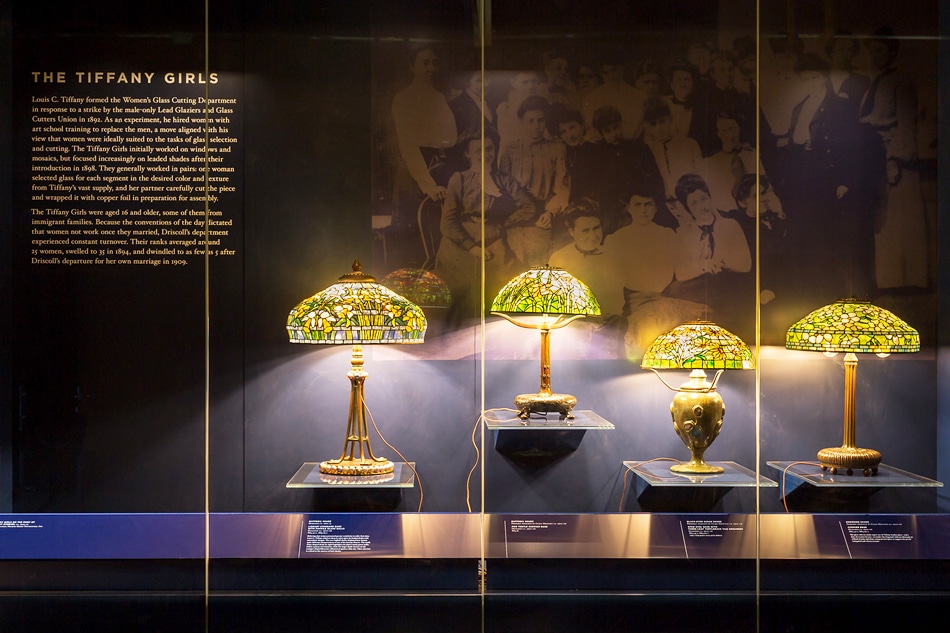 The exhibition acknowledges Driscoll and her team of “Tiffany Girls.” 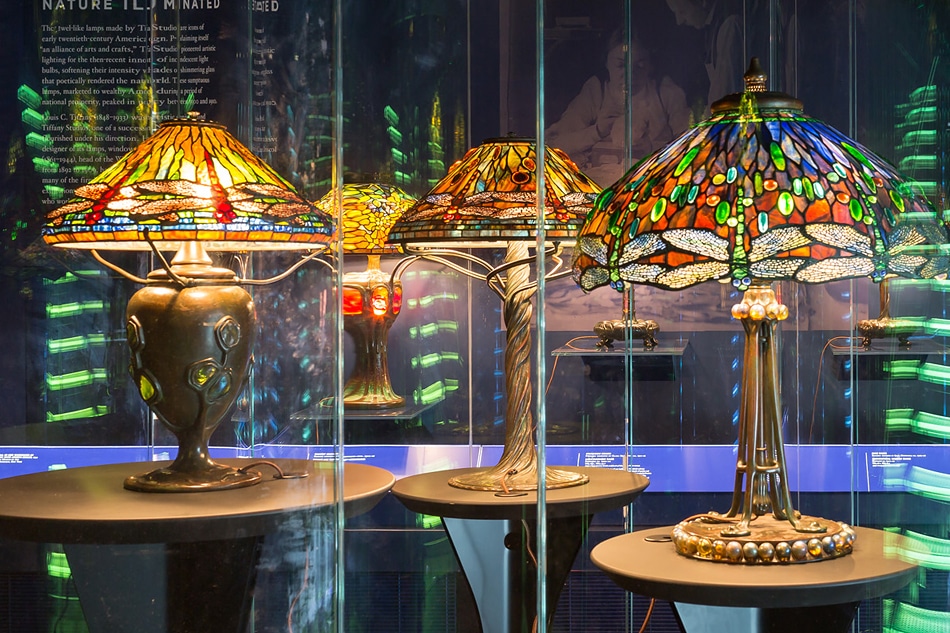 Several versions of the Dragonfly shade are on display in the exhibition. 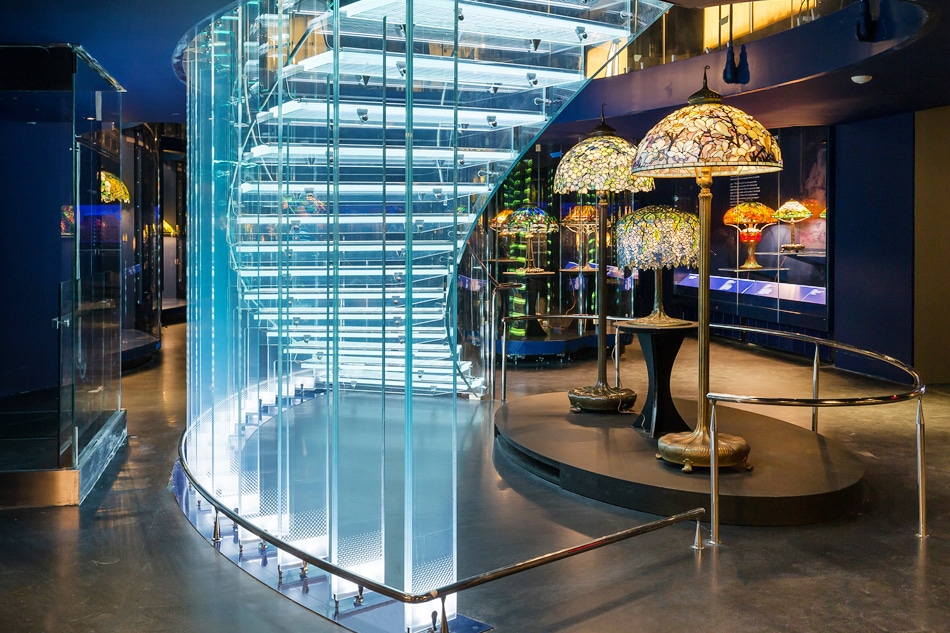 The glass staircase is made of laminated low-iron glass components with minimal polished stainless-steel connectors and internal lighting. 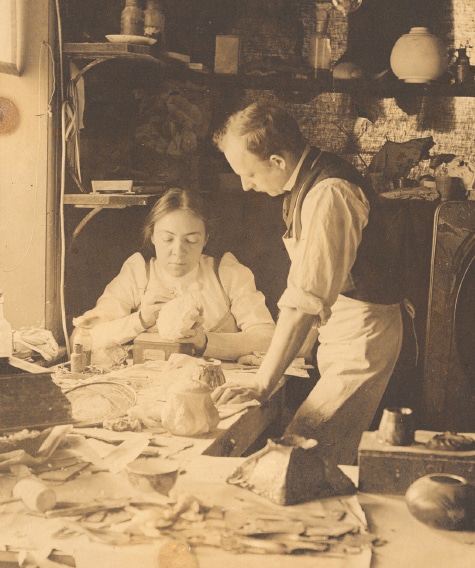 Clara Driscoll in her workroom at Tiffany Studios with fellow craftsperson Joseph Briggs in 1901. Photo courtesy of the Department of American Decorative Arts, the Metropolitan Museum of Art

Is it the world’s premiere collection of Tiffany lamps? “It probably is, but to be safe, we say ‘one of the largest,’ ” states NYHS vice president and museum director Margaret Hofer. The underlying approach is the same as that of other new galleries on the museum’s fourth floor. Here, items from the permanent collection, from a firefighter’s helmet scorched in the Great Fire of 1835 to a 1990s parking meter, have been newly installed, accompanied by touch screens on which visitors can dig down for further context and information. “Objects tell stories,” says Hofer. “We now have a series of narratives that let the objects talk.”

The stories they tell in the Tiffany gallery are juicy ones, celebrating the anonymous women behind the Tiffany lamp. The lion’s share of credit has gone to Louis Comfort Tiffany — scion of the jewelry and silver retailing family, interior decorator and maker of the glorious stained-glass windows that graced churches and other buildings from the late 1870s on. However, it was actually Clara Driscoll (1861–1944), an Ohio native and head of the Women’s Glass Cutting Department for 17 years, who was the genius behind the Tiffany lamps that are most avidly sought by today’s collectors.

Her hiring came about as the result of a labor dispute. The all-male Lead Glaziers and Glass Cutters’ Union went on strike in 1892, so L.C. hired women — the numbers varied over the years from just a few to nearly three dozen, as convention dictated that they leave the job when they married — to select and cut glass. “Clara Driscoll designed almost all the naturalistic shades,” Hofer says. “We’re not saying he stole her work. They had a close working relationship, shared an artistic vision, and he had final approval on all designs.” But, she adds, it was Driscoll and the self-styled “Tiffany girls” who created the floral-inspired shades that are currently so popular: “They essentially painted these lamps through glass selection. It was done with great precision, so that each individual piece, which had many variations in color, flowed into the next and created a seamless design. Effects like dappled sun and textured flower centers were achieved through the women’s judicious and creative glass selection.” 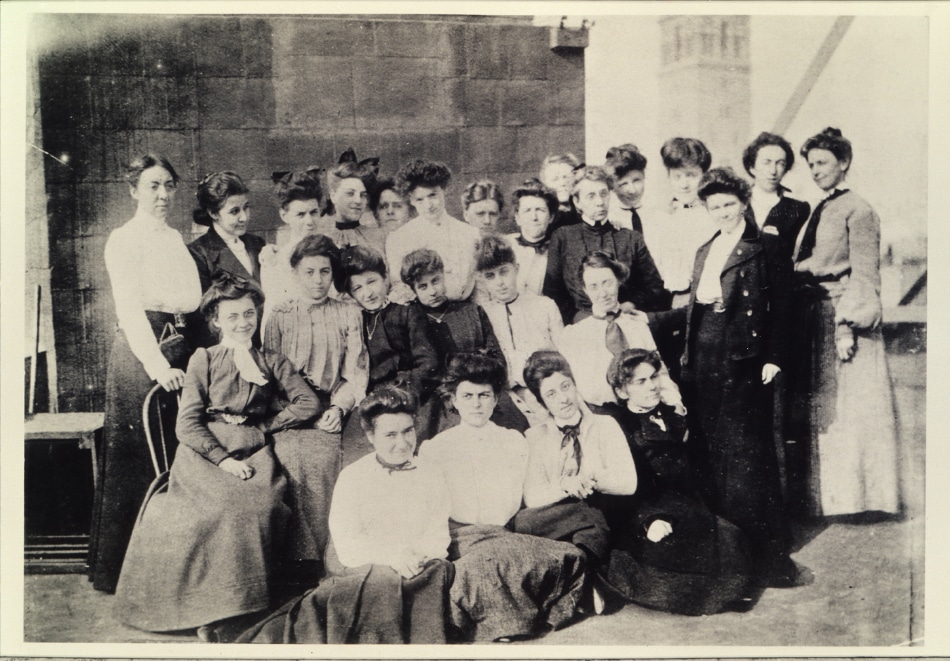 The “Tiffany Girls” on the roof of Tiffany Studios, 1904–05. Photo courtesy of the Charles Hosmer Morse Museum of American Art

“Objects tell stories. We now have a series of narratives that let the objects talk.” 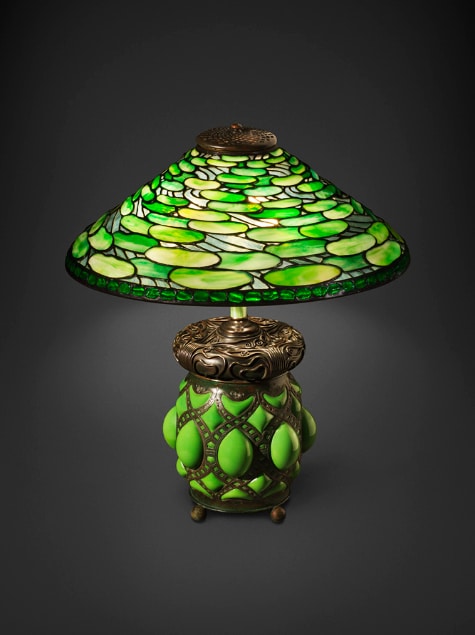 “Early on, Driscoll designed shades with integral bases, such as her Dragonfly lamp with a mosaic base,” Hofer says. “By 1904, due to pressures from the firm’s business managers to focus on more affordable and more easily produced products, she was concentrating on shades only.” (At this point, cast-bronze bases replaced costlier mosaic ones.)

Driscoll was paid $35 a week, a handsome salary that caused tension between the men and the women. “Tiffany paid women on the same scale, and the men were resentful,” Hofer explains. Perhaps fortunately, they mostly worked in different locations — the women in midtown Manhattan and the men in Corona, Queens, where they cast the bronze bases. “We believe men were responsible for the design of the bronze bases, but no documentation has been uncovered,” Hofer says. The men also designed “geometric” shades that, instead of irregularly shaped pieces of glass, used square and rectangular ones, for which Tiffany thought they were better suited. But, points out Hofer, “it’s the nature-themed shades designed by the women that brought the firm great acclaim and that collectors clamor for today.”

Most of this backstory was discovered in 2005, when two Tiffany scholars happened upon Driscoll’s correspondence at the library of Kent State University, in Ohio, and at the Queens Historical Society. Excerpts of her letters, dramatically recorded for the new gallery by the actress Lois Chiles, reveal Driscoll’s pride in her designs. “The whole story is laid out in Clara’s letters,” says Hofer. Prior to their discovery 12 years ago, “it was completely unknown.”

Up the illuminated glass staircase, on the gallery’s top level, more about the company’s history and process of manufacture is revealed in displays of tools, design drawings and templates acquired by the NYHS in 2007 from a woman whose father-in-law worked at Tiffany Studios when it went bankrupt in 1932. There’s a “connoisseurship case” where visitors can learn to spot a fake Tiffany lamp and an interactive display made up of hundreds of computerized lights where one can fiddle with knobs and swipe across surfaces to create one’s own multihued Tiffany lamp design.

It’s a happy ending for the Neustadts’ world-class collection, to be sure. The magnificent lamps have a home, and the women who created them a voice.