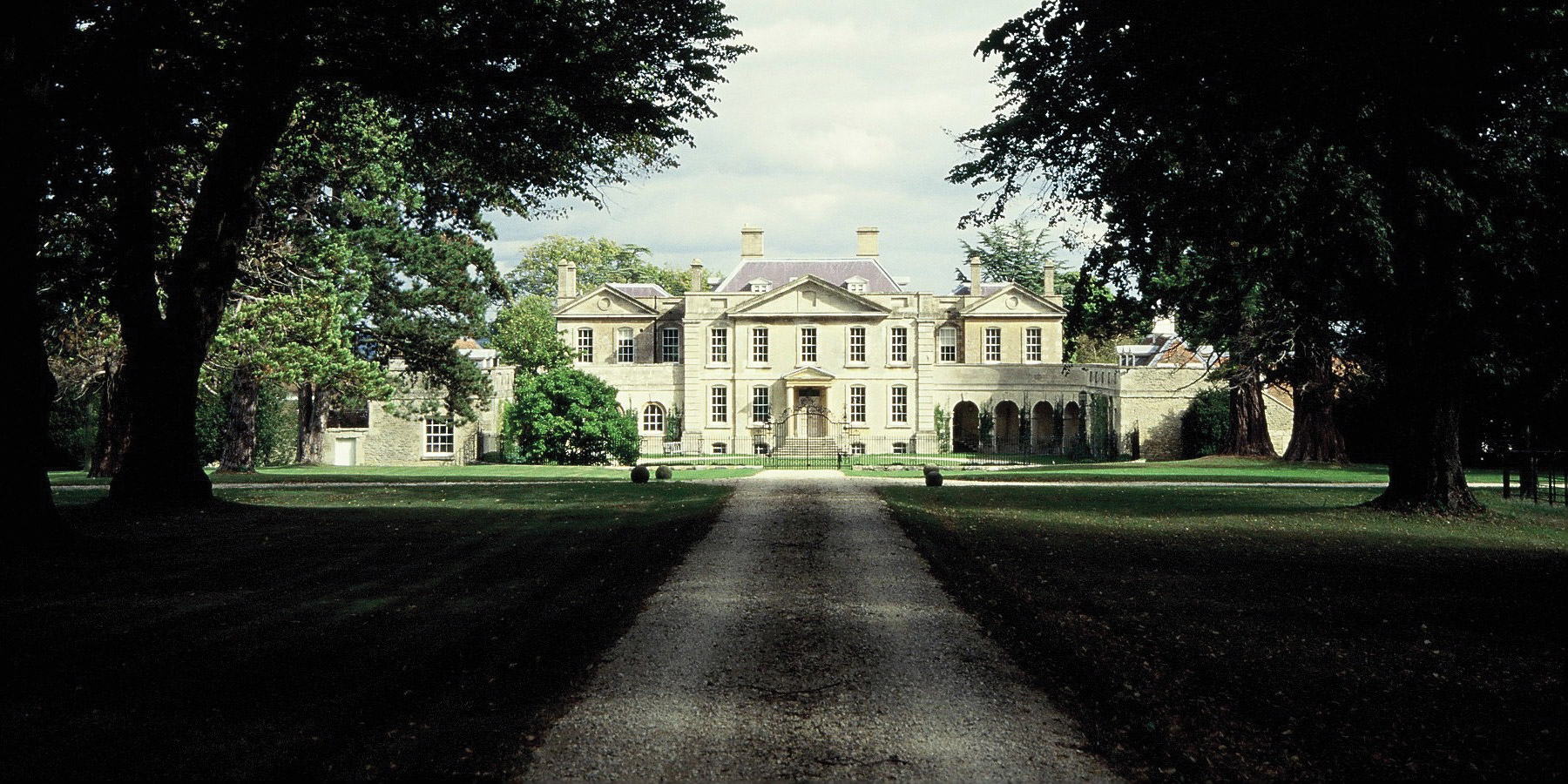 Veere Grenney has cultivated an elite roster of clients who come to him for the harmonious, comfortable and beautiful spaces he creates. 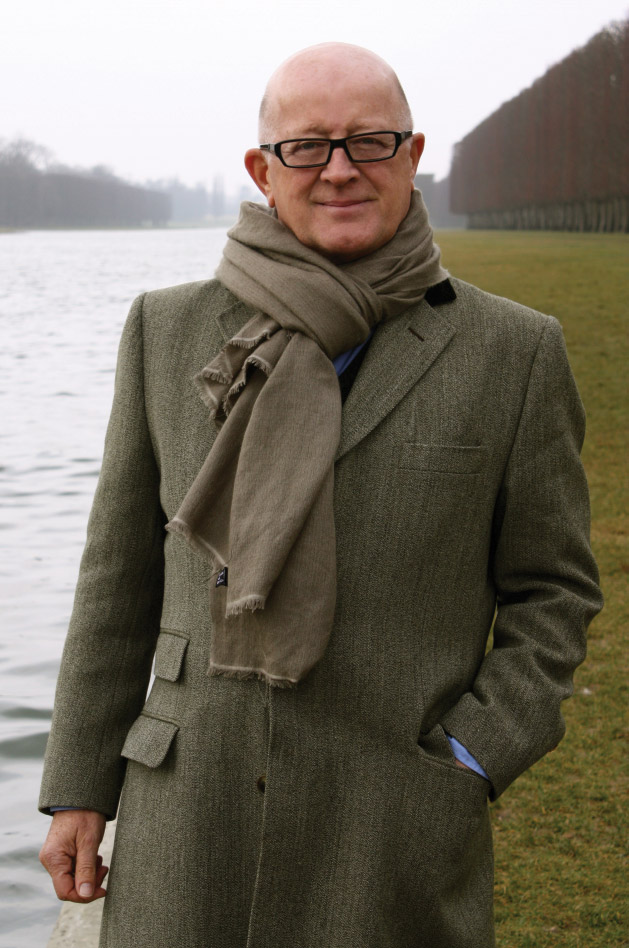 July 2014Veere Greeney on a recent visit to Versailles. Photo by David Oliver. All images courtesy of Veere Greeney Associates

Meeting Veere Grenney, one may find it difficult to believe that the designer grew up 11,000 miles away from London, in New Zealand. That’s because Grenney has become such a key figure in English decorating, it’s hard to imagine his boyhood in 1960s Auckland. He admits that his life’s journey has been rather remarkable. “At that time in New Zealand, there was really no such thing as an interior designer,” he says. “There were just people in shops who sold bolts of fabric.” His mother, however, came from an artistic family and was fond of redecorating houses and fixing up gardens. “She would let me rearrange all the furniture on my school holidays, which I thought was wonderful,” says Grenney. Unaware that the profession of interior designer existed, Grenney studied architecture, but his antipathy to mathematics presented a roadblock. At age 22, he left New Zealand to backpack around Asia and ultimately wound up in England. He spent evenings waiting tables and soon took a stall on London’s legendary Portobello Road, where he sold furniture, porcelain and decorative objects — often to top interior designers.

“London was full of style gurus then,” Grenney says of the late 1970s, “and I met many of them: Christopher Gibbs, Geoffrey Bennison, George Sherlock. Selling to them, I felt I was on the right track.” His stock then included black-lacquered Aesthetic Movement furniture, Arts and Crafts items and solid Georgian pieces, and he remains eclectic. “If you look and you study, you will find things you love whether they cost ten pounds or a thousand.” 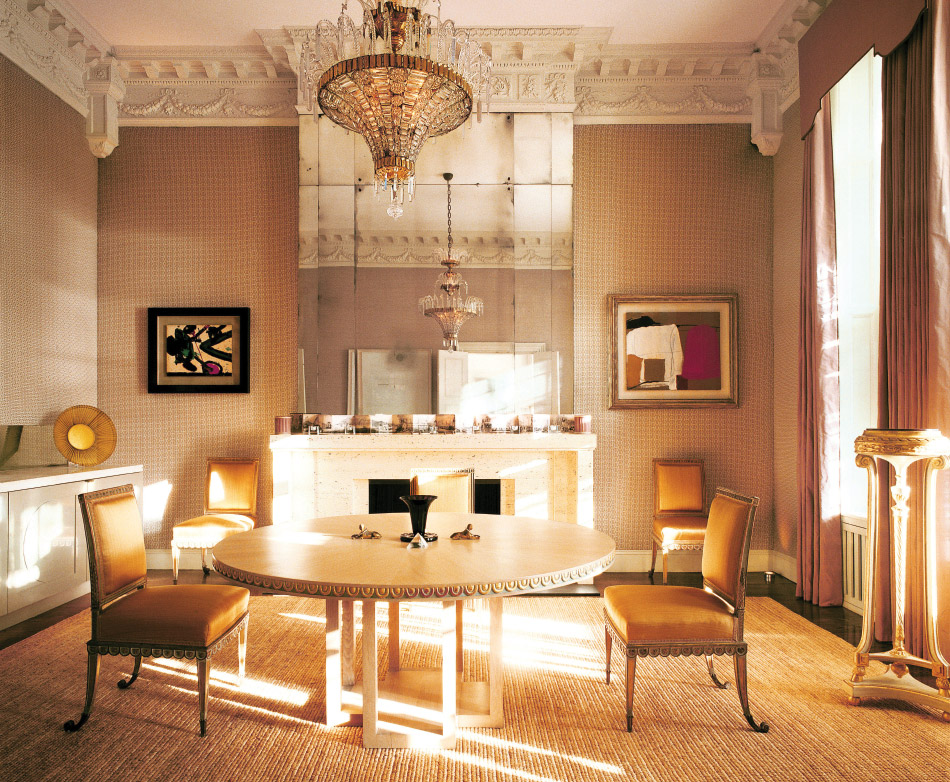 In a London dining room, 18th-century Swedish chairs and a 1930s Maison Jansen chandelier blend seamlessly with a fireplace, dining table and sideboard
designed by Grenney’s firm. Photo courtesy of World of Interiors 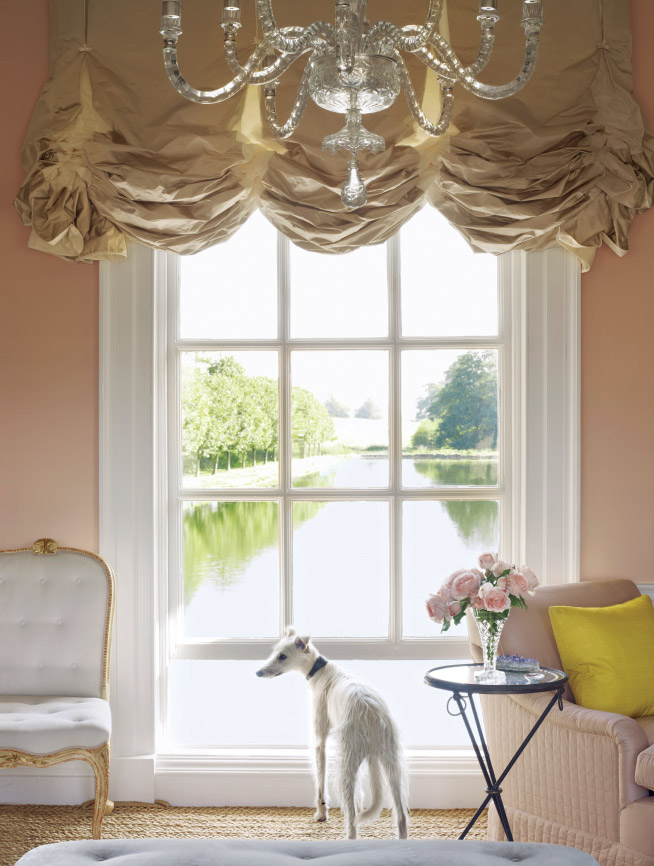 At Grenney’s country house (which once belonged to David Hicks), in Suffolk, England, the London designer’s dog, Rio, enjoys the view. Photo courtesy of Veranda

His big break came at age 30, when renowned designer Mary Fox Linton — then partnered with David Hicks — gave him an apprenticeship. Three decades later, he still can’t believe his luck. “Mary was, and is, extraordinary, a marvelous teacher,” he says. “And I regarded Hicks, as a sort of god. Having them as mentors was the best education imaginable.”

Grenney stayed with Fox Linton for nearly four years, until the late ’80s, assisting her on design and running her Fulham Road showroom, which he describes as “revolutionary” in the way it championed contemporary furniture designers, including a young David Linley. Hers was a lasting influence. “Mary’s color palette was very clean and serene: pale lilacs, grays and pinks, often complemented by a Berber brown. That’s not dissimilar to what I do today. I haven’t copied her fabrics in my own collection, but I would say there are echoes.” Grenney left Fox Linton to become a director of Sibyl Colefax and John Fowler, the interior-design arm of Colefax and Fowler. Synonymous with the English country-house look, the studio proved a far cry from the modernism of Fox Linton and Hicks. “It was very establishment,” says Grenney, “but it enabled me to polish every facet of the diamond in terms of decorating styles. Colefax and Fowler was obsessed with quality, whether furniture, fabrics or architecture.”

In 1997, he left the firm to set up his own studio. Focused primarily on residential projects, he has cultivated a roster of elite clients, many of whom return to him again and again. No matter how grand the home (or the homeowner), he never loses sight of what he considers his aesthetic goal. “John Fowler described it as ‘sensibility,’ ” he says, “and that is important because it is not about living grandly or modestly but about achieving harmony, comfort, proportion and a sense of beauty that is right for that person and that place.”

“It is not about living grandly or modestly but about achieving harmony, comfort, proportion and a sense of beauty that is right for that person and that place.” 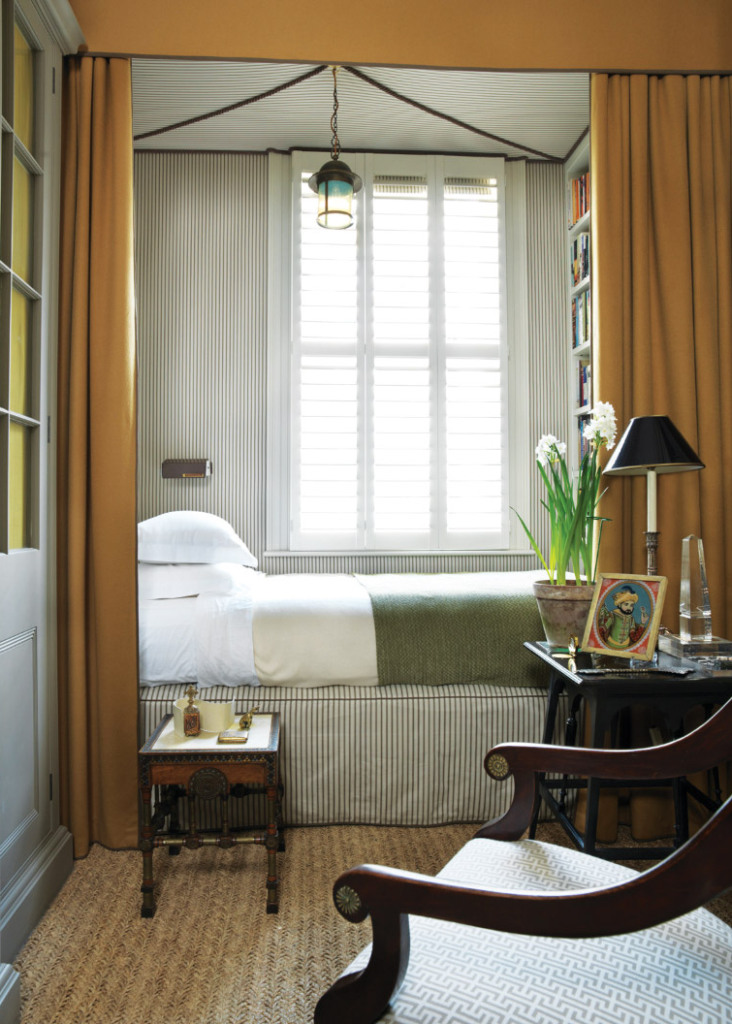 The designer modeled this tucked-away sleeping space in a London residence after a Napoleonic campaign room. Photo by David Oliver

He goes on to say: “I see so many young designers who are very talented but addicted to fashion. I think it’s nice at the top end to express more than just the beige box.” Grenney is as elegant and charming as his formidable reputation would suggest. His studio, Veere Grenney Associates, is not large, however; there are no more than 12 staffers at any one time, which is just the way he likes it. “Everyone I admire in this business goes for a similarly sized studio,” he explains. “Anything larger and I wouldn’t be able to keep personal contact with all our projects.”

Grenney has never been all that tempted by commercial projects, although one of his first solo ventures was a pair of glamorous new-build suites at the top of Claridge’s. Today about half of his projects are based in the U.K., with the others spread around the world, mainly in New York, the Caribbean and Europe. He doesn’t promote one look, believing elegance, simplicity and comfort can be applied to any style, whether classic or contemporary. “The glorious thing about interior decoration is that it is about art and architecture, cut and tailoring, climate and culture, how people live and how they eat — and every one of those is a life’s study in its own right,” he says. Currently, he is reviving a 1930s-era house on a Swedish island that references 18th-century Gustavian style. Then there’s a town house on East 81st Street in New York, which he is injecting with an Arts and Crafts feeling; the refurbishment of a classic John Nash house in London’s Regent’s Park; an Oliver Messel–style beach house on Mustique; and a mansion in Jackson Hole, Wyoming, designed by Paul Bertelli. 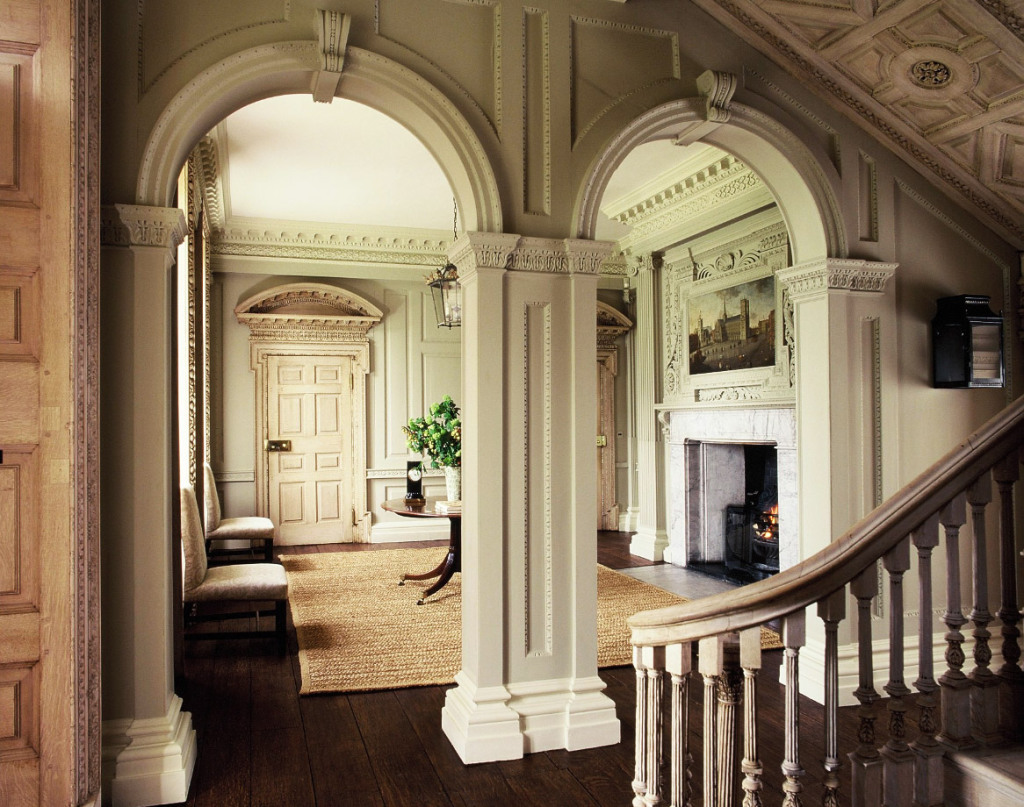 Grenney brightened the interior of an Oxfordshire country house by stripping back the woodwork to a pale bleached oak. Photo by James Mortimer 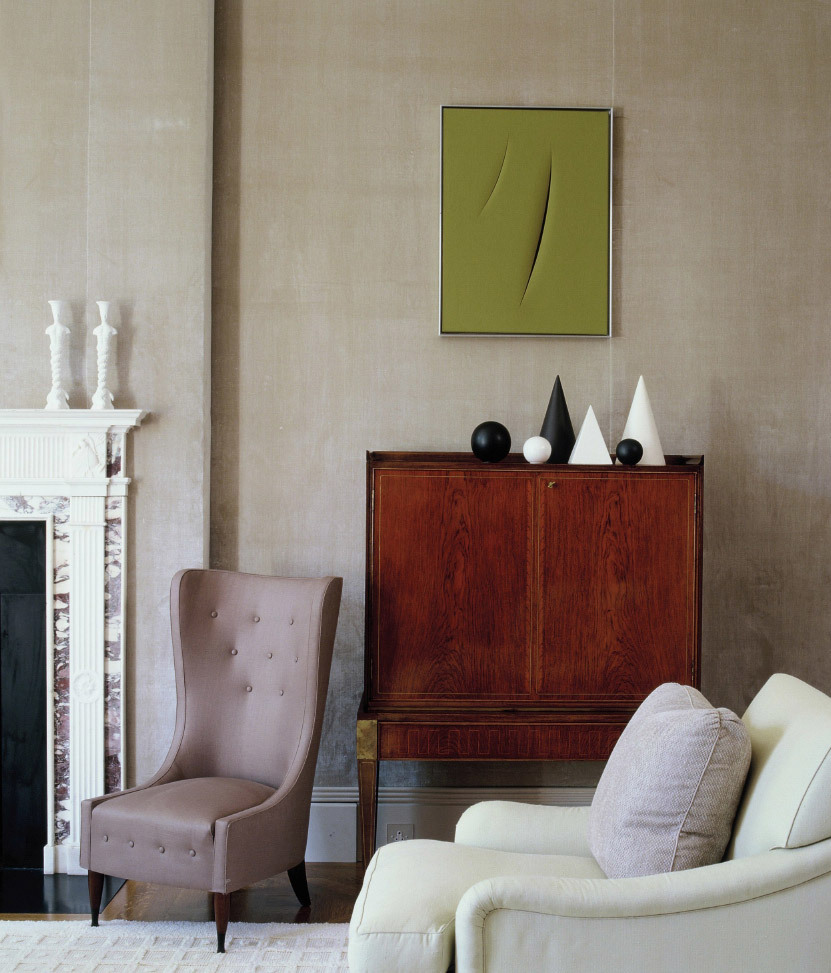 Elsewhere in the London townhouse, a Temple chair by Veere Grenney Associates keeps company with a Lucio Fontana painting and sculptural objects by Giò Ponti. Photo by Simon Upton

The Jackson project is a rare collaboration. For Grenney, architectural proportion is key to the success of any scheme, so he rarely undertakes a joint project. “Where possible, we build from the ground up,” he says, “because I can’t design a room unless I know it will work architecturally, which is why I employ three architects in the studio.” A case in point is a house on New York’s Long Island. Featuring local stone and timber, the home offers an incredible sense of vertical space. It’s also very contemporary in feel — a far cry from his magnificent heritage houses in the English countryside.

Grenney himself has three homes he shares with his partner, David Oliver, founder of the Paint Library, which specializes in paint for both period and contemporary homes. They have a Georgian town house close to London’s Marble Arch; a place they’re building in Tangier, Morocco; and a Sir Robert Taylor–designed 1750 Palladian folly in Suffolk, which he’s owned for 30 years. “It used to belong to David Hicks,” Grenney says, “and it is my absolute passion. I can’t live without the English countryside.”

But life in London keeps him busy: He continues to add to his collection of hand-blocked, primarily geometric upholstery and drapery linens, all produced in England, with a range of floral designs coming soon. And he also has a small furniture collection, mainly comprising designs he originally created for key projects.

He says today that if someone had told him how his life would turn out when he was a boy back in New Zealand, he would never have believed it. “Drive is the important thing,” he explains. “I always turned up on time and was dedicated to doing my best. Drive is what gives you the chance to show what you can do.”