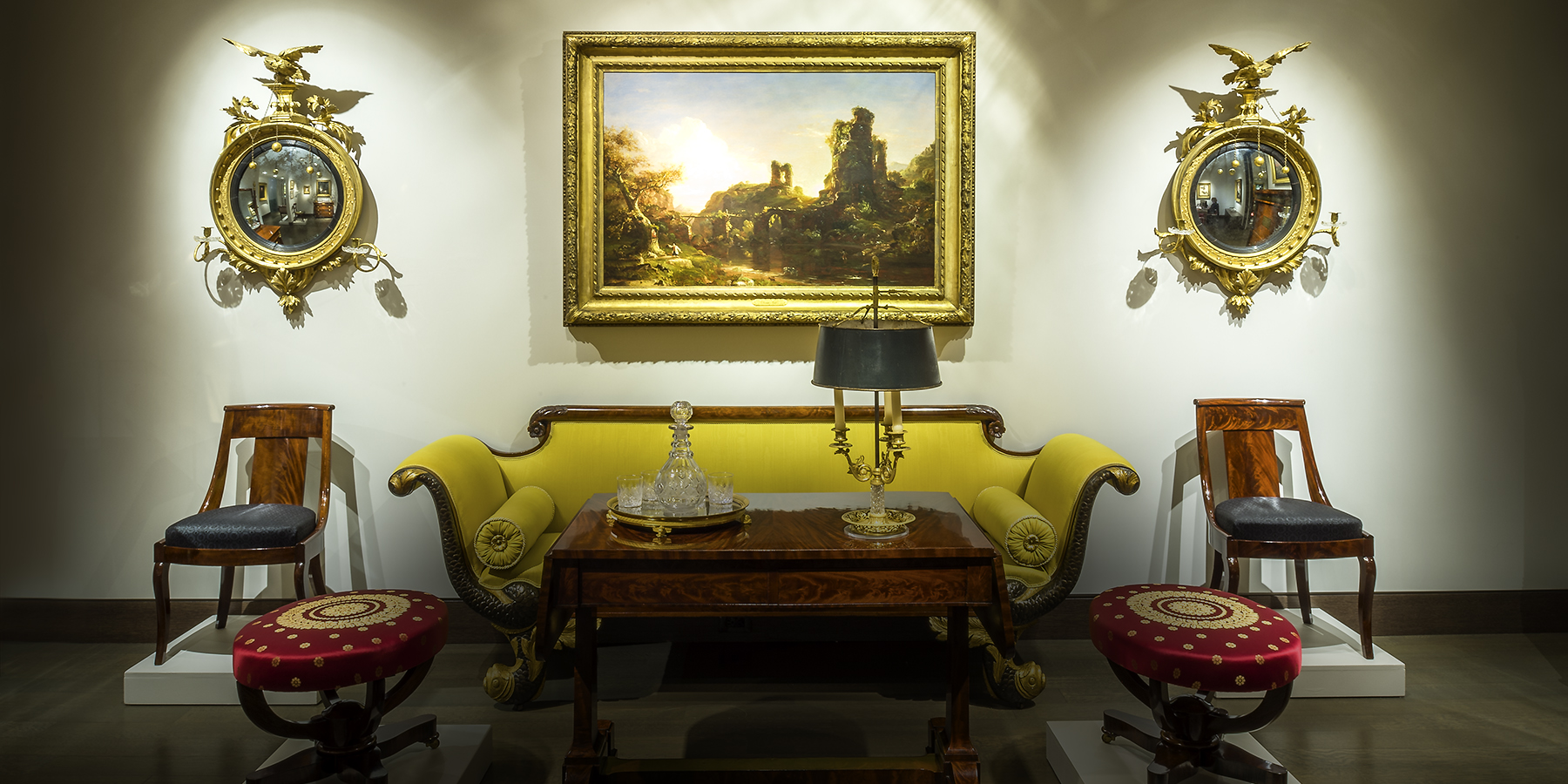 A must-see show at New York's Hirschl & Adler Galleries gathers together some of the finest examples of early-19th-century Neoclassical American furniture ever produced. 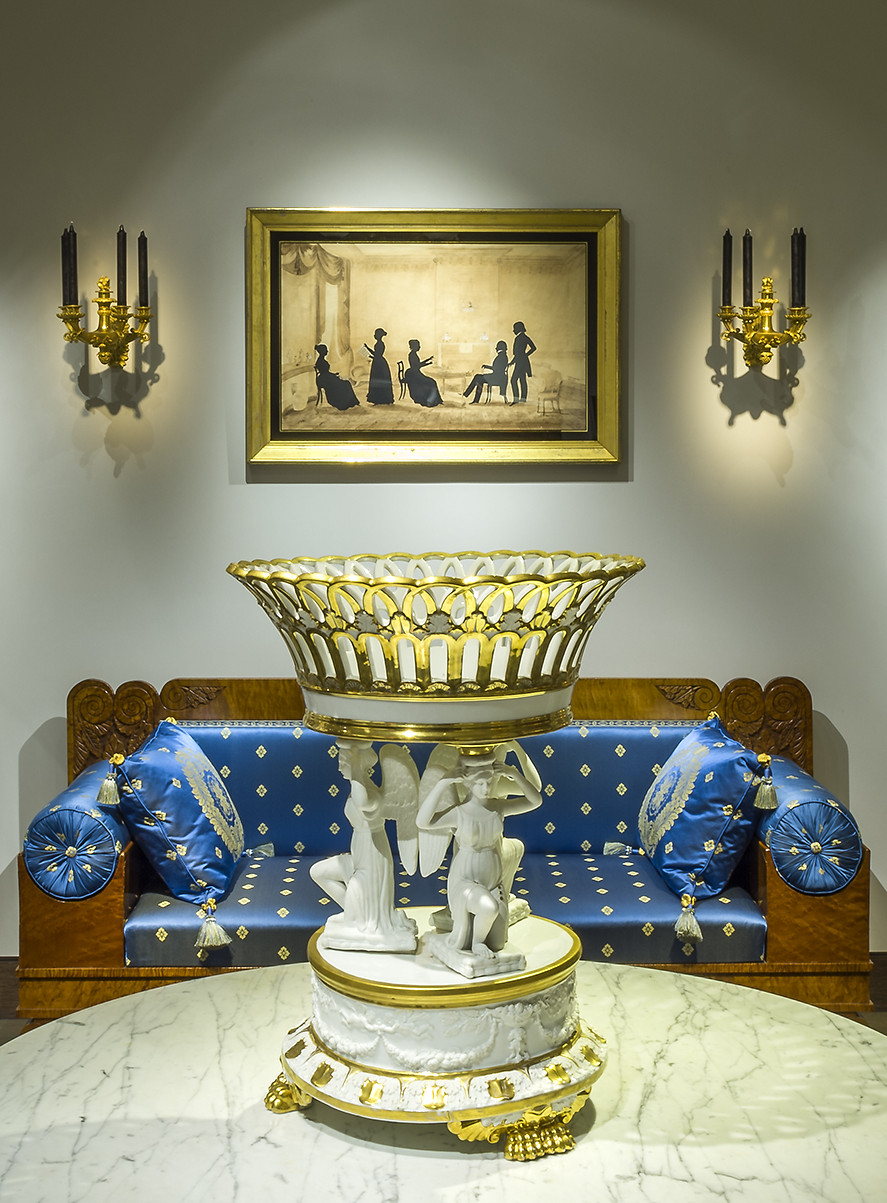 January 26, 2015A Martin Van Buren ”Old Paris” porcelain centerpiece, ca. 1820–25, and a curly maple sofa made in Philadelphia around 1825, are among the highlights of “Very Rich and Handsome,” now on view at Manhattan’s Hirschl & Adler Galleries. Top: a sofa featuring dolphin feet, one of 14 recorded examples of this form, is flanked by two Duncan Phyfe chairs (of a set of 16) once owned by the Stephen Van Renssalaer family. Photos by Eric W. Baumgartner

I feel persuaded the sofas will please you,” enthuses Abby Breese Salisbury, of Boston, in a letter written in 1820 to her aunt and uncle, Elizabeth and Stephen Salisbury, of Worcester, Massachusetts. The Salisburys had tapped their niece to oversee the commission of a set of furniture from the fashionable Boston cabinetmaking firm Isaac Vose & Son. “Vose is very much pleased with his own success in the side table and card tables,” Abby continues brightly. “He says they are greatly admired. We think they are very rich and handsome and the sofas being of the same style of work…will correspond equally well.”

As it turns out, “Very Rich and Handsome” is also the perfect moniker for the knockout survey show of American Neoclassical furniture and decorative arts (including what may be one of the Salisburys’ sofas) that’s now on view through February 13, at New York’s Hirschl & Adler Galleries. “We’ve placed pieces from each of the furniture hubs — Baltimore, Boston, Philadelphia and New York — near one another to create a visual dialogue that reveals some of the newest research in the field,” explains the gallery’s managing director, Elizabeth Feld, during a recent visit to Hirschl & Adler’s sprawling Midtown headquarters. (This week, the gallery also has a formidable presence at the Winter Antiques Show at the Park Avenue Armory.)

In the last few years, a deepening understanding of the design preferences of individual cabinetmakers and their shops and the unearthing of paperwork and receipts linking objects to both their makers and their owners has helped flesh out the story of American furniture production at the turn of the 19th century. Many of these discoveries are explored in the deftly researched catalog that accompanies the exhibition, which was curated by Feld and her father, Stuart P. Feld, the gallery’s president and director. “We also want to show that the rise of classical design in America is a global story,” Elizabeth Feld says. 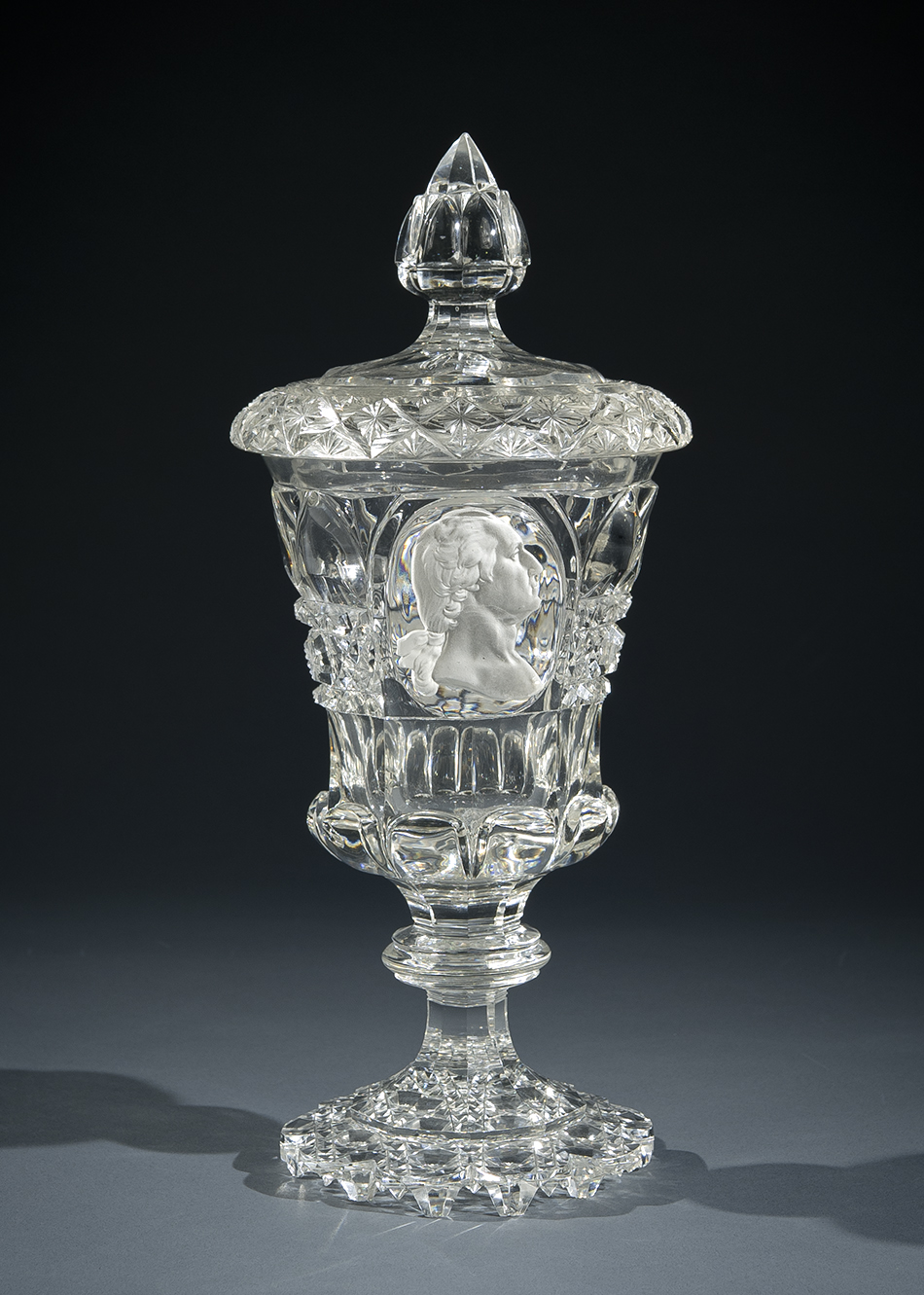 This covered urn, ca. 1825, with its portrait of George Washington, is part of a grouping of French glass pieces featuring the faces of America’s Founding Fathers.

It’s a story, in fact, of how a new republican awareness took hold of the American psyche soon after the Revolution and just as excavations at Herculaneum and Pompeii were spawning a renewed appreciation for the measured cadences of classical design. Furniture made during this period (roughly 1800–40) typically featured neatly proportioned, geometric massing; antiquities-inspired carving; gilded-brass furniture mounts; and decorative inlays and flourishes.

It’s during this time that, say, a large-scale wine cooler, whose form closely resembles a sarcophagus, seemed an appropriate choice for an upscale New England dining room. An exceptionally large example on display at Hirschl & Adler is attributed to one of the icons of American furniture, Boston cabinetmaker Thomas Seymour. It features an inlayed Greek key pattern just below the lid and gleaming dolphin-head toe caps and casters. Early-19th-century rooms showcased a range of furnishings that sported classical design motifs meant to convey the patriotic leanings of the young nation’s wealthiest consumers.

Such patterning often shouts the loudest from the smallest objects on display. Take, for example, a grouping of French-made glassware adorned with the faces of such American luminaries as George Washington, Thomas Jefferson and James Madison; or the helmet-shaped Chinese Export porcelain creamer emblazoned with the Seal of the United States and the motto “Don’t Give Up The Ship.” Gesturing to a French ormolu clock sitting upon a side table — it features a full-length figure of Washington and an eagle perched on a block that reads, “E Pluribus Unum” — Feld points out, “A French clock celebrating America’s first president; I don’t think the Parisians were buying these.”

One of a pair of bow-front mahogany chests, attributed to Philadelphia’s Joseph B. Barry & Son, includes such graceful details as carved, herm-type corner columns topped by Egyptian heads.

In another gallery, a rare pair of figural carved, bow-front, mahogany chests stands in conversation with a long side table. The chests, attributed to Joseph B. Barry & Son, a London-trained, Philadelphia furniture maker, and made for the Lisle family of Philadelphia around 1815, display gracefully carved, herm-type corner columns with Egyptian heads and human feet; they also still carry their original Sheffield silver-over-copper drawer pulls. The side table, whose four front legs feature stern-faced, bearded and mustachioed men wearing distinctly Middle Eastern headgear, clearly relates to the Barry piece, but thanks to recent research by Alexandra Alevizatos Kirtley, a curator at the Philadelphia Museum of Art, its maker is now thought to be Edward Priestley of Baltimore. “Even though they are exploring similar design impulses,” says Feld, “when you place these objects together it becomes abundantly clear that they are not at all by the same cabinetmaker or even from the same region.”

Another highlight of the show is a pair of Baltimore painted card tables, made around 1825 and attributed to the Irish émigré brothers John and Hugh Finlay. “When people see something stenciled or painted, they often ask me whether it was done to cut costs — mounts and inlays were expensive — or as a decorative flourish,” Feld explains. “But when you see such well-preserved pieces as these, with both gilding and decorative mounts, you understand the original intention: The Finlays want to show what they are capable of. I love these tables: they have all the bells and whistles as far as Baltimore painted furniture is concerned. And they look so modern.”

But perhaps the greatest of Hirschl & Adler’s jewels is the splashy mahogany sofa quite possibly made for the Salisbury family. It came out of the Vose workshop with carvings attributed to Thomas Wightman. The sofa has four dramatically carved feet in the form of eagle heads with mouths agape and stylized wings streaming from behind. In fact, every element of this sofa’s design embodies the vigor of American Neoclassical design: The dramatic S-curves of the arms are accentuated by arcs of foliate carving embedded in every turn; the pronounced hook of each eagle’s beak on the corners of the crest rail lends a sort of eerie wisdom to the heads; the rigorous reeding that runs along the crest and support rails adds a visual rhythm to the entire surface. Just as Abby Salisbury said, the sofa — like so many of the offerings at this tour-de-force show — is “very rich and handsome,” indeed.