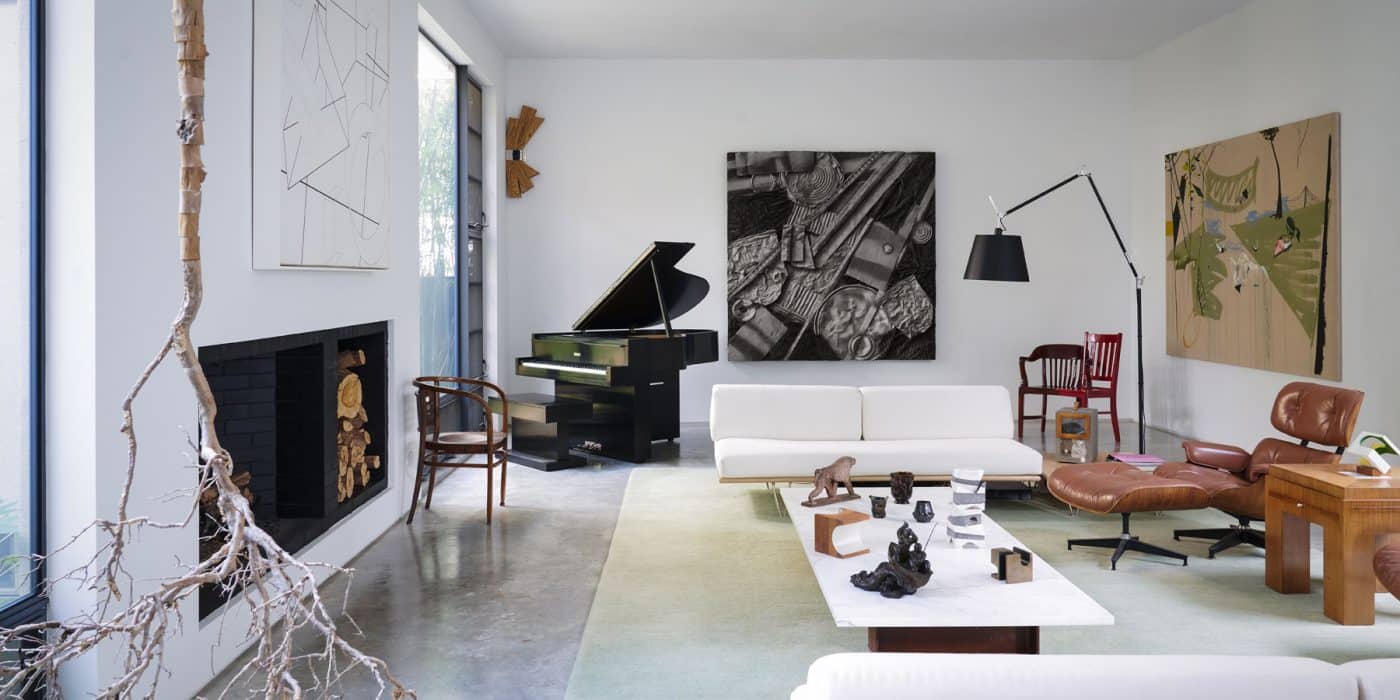 The New Orleans–based artist possesses the increasingly rare skills of a highly trained artisan and the eye of an experienced scavenger, as is evident in a new museum exhibition and in his own Crescent City home. 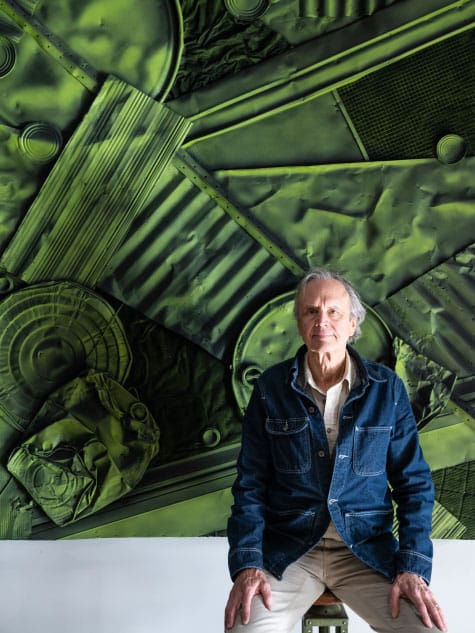 January 27, 2019William Monaghan, in the studio with an untitled piece from 2016. Top: In the living room of his New Orleans home, his Untitled, 2018, hangs behind a Case Study House daybed. Other works include a wall sculpture by Richard Artschwager, an Eames chair and footrest, a French Art Deco side table, a Steinway piano, designed in the 1930s by Walter Dorwin Teague, and a marble coffee table made by Monaghan. Photos by Paul Costello

William Monaghan spends a lot of his time picking through trash. Working with detritus found in the junkyards of his hometown of New Orleans, the artist reshapes corrugated steel, crushed aluminum cans and other industrial materials, which have fascinated him since childhood, into art that reflects the whole of his life: his training in the Bauhaus tradition at Yale in the 1960s, his obsession with the challenges of manipulating light and dimensionality, his insatiable appetite for collecting, his political ideals and his own experiences of disaster and loss.

“I’ve always been fascinated with objects and finding things,” he says, speaking by phone from his bright modernist home in New Orleans’ Uptown district. “I troll around in ditches and junkyards and find all of these interesting objects.” The geometry of the scrap pile is what most intrigues him. “I find it so dramatic,” he says.

The resulting body of work resists neat categorization — are these paintings, collages or sculpture? — and is at once lyrical, minimalist, formalist and nostalgic.

A cross-section of his output is currently on view at the Contemporary Arts Center in New Orleans in  “William Monaghan: I — Object,” part of a museum-wide focus on art that explores the history and politics of labor in America. Curated by Andrea Andersson, the exhibition juxtaposes Monaghan’s early efforts from the 1970s and ’80s with more recent projects. While nature has a hand in the early pieces, oxidizing and bending metal elements to yield art that has essentially made itself, the new works distinctly show the intervening hand of the artist as laborer, as worker, as a maker of things — a figure increasingly rare in the contemporary American landscape. 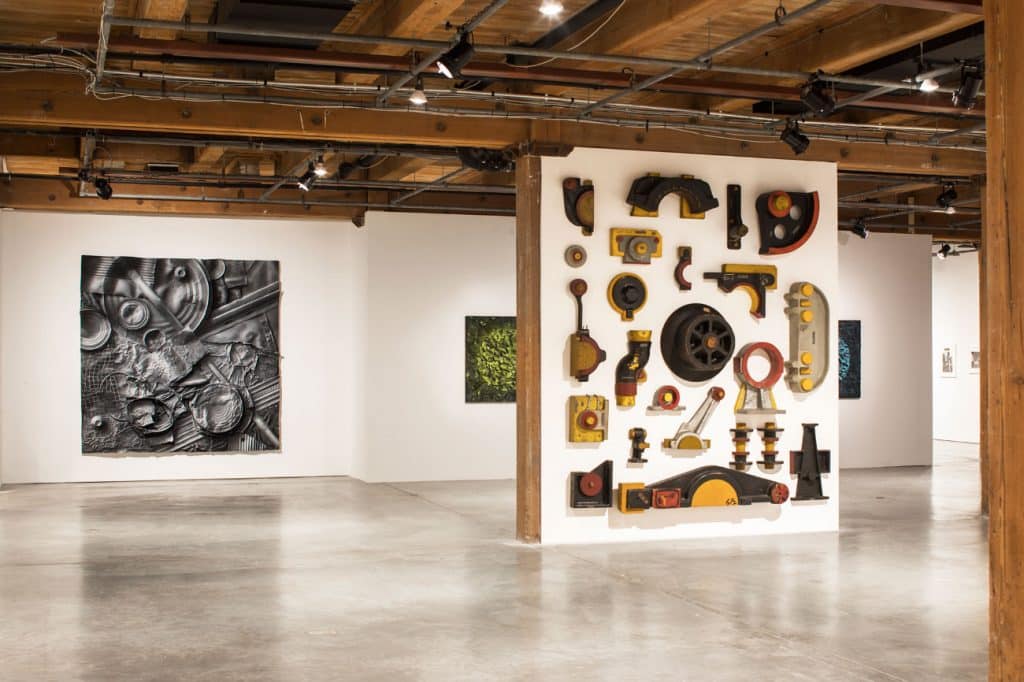 A selection of Monaghan’s work is now on view in “William Monaghan: I — Object,” at the Contemporary Arts Center in New Orleans. The display in the foreground is composed of foundry patterns Monaghan scavenged from abandoned factories in the 1970s. The colors represent a kind of code, explains the exhibition’s curator, Andrea Andersson: “They say you do this in this form and that in this other form. It’s a different way of thinking of color — not in the context of art history, like how your eye makes sense of it, but as a command to an employee.” Photo by Alex Marks 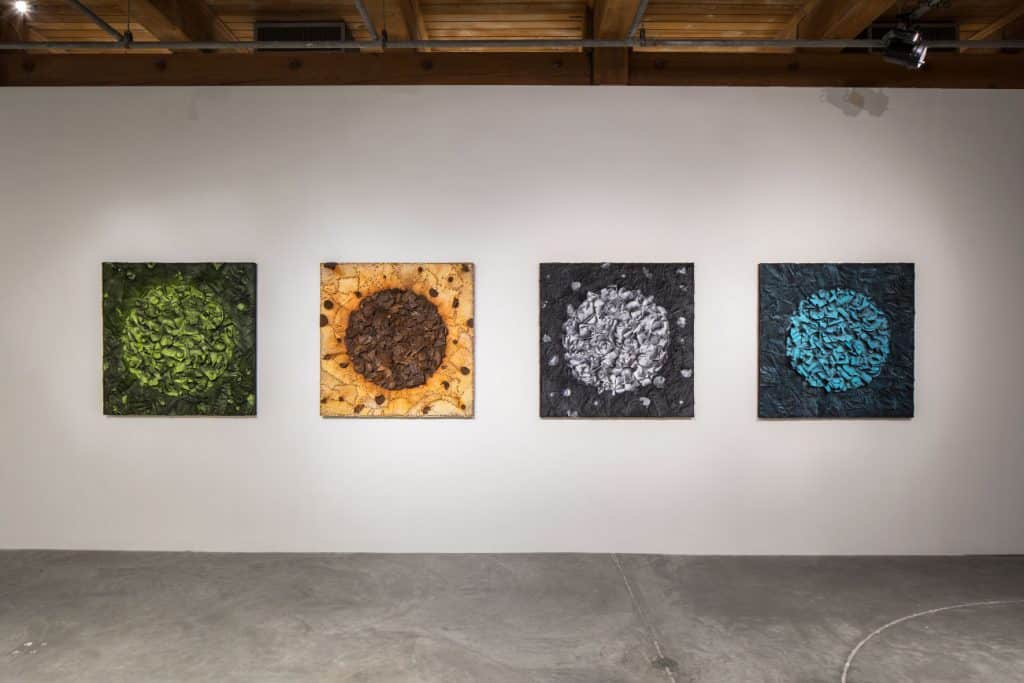 The show juxtaposes Monaghan’s early efforts, from the 1970s and ’80s, with newer works, like these untitled ones from 2015 and 2016. Photo by Alex Marks 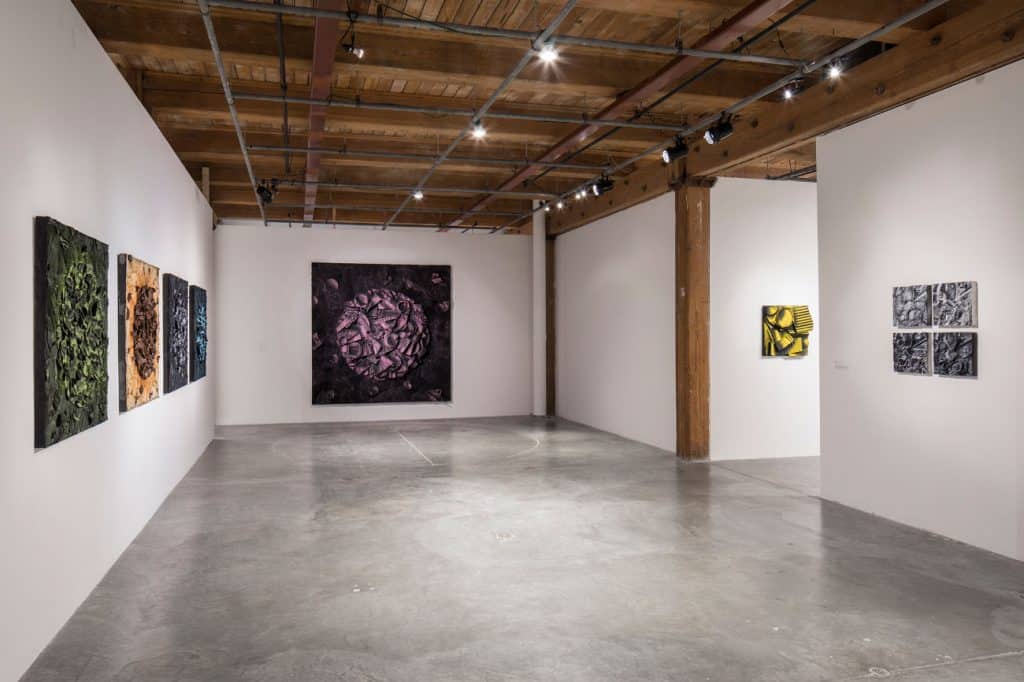 Although Monaghan, who is represented by Octavia Art Gallery, composed the early pieces from metal objects and rust-streaked canvas or wood — “repurposing and aestheticizing” found materials from abandoned industrial spaces, as Andersson puts it — his inspiration for the recent works derives from the postindustrial ravages of Hurricane Katrina and the very human effort of rebuilding. Throughout, Andersson observes, Monaghan’s art explores “what has gone missing and what survives only as relic — made useful and meaningful again.” 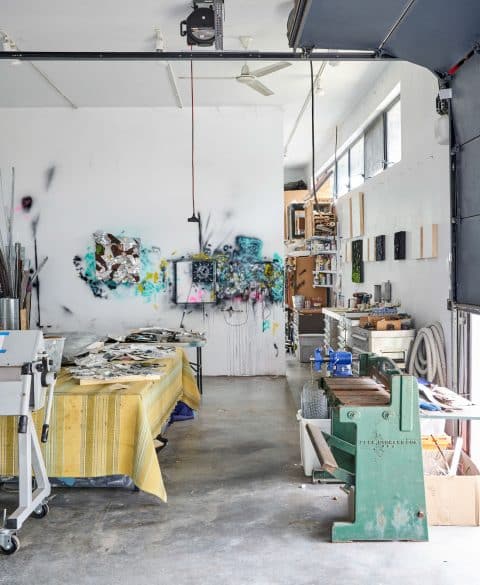 In his home studio, the artist experiments with the discarded objects he collects, creating small-scale studies. He then fabricates the forms on a larger scale. Photo by Paul Costello

Born in Philadelphia and raised in Metairie, a suburb of New Orleans, Monaghan developed an early interest in industrial materials and environments while following his father, a vice president at the Reily Foods Company, around the plant. At Yale, Monaghan studied under architect Paul Rudolph and absorbed the lingering influence of abstract painter and former Bauhaus master Josef Albers, erstwhile chair of the university’s design department. He went on to earn a master’s in architecture from Harvard and spent a year as a rigger for architect and theorist Buckminster Fuller. Through his construction work on Fuller’s geodesic domes and his later training at the Portland Sheet Metal Shop (where he also established a studio) in the Boston area, he quickly discovered the attraction of steel, industrial fabrication and form as a means to articulate his artistic vision.

That vision is a complex hybrid of politics, aesthetics and art history that, Andersson notes, asks an essential question for our time: “What do we do with all this stuff that no longer has value in our utility-based marketplace and so can only exist in an aesthetic dialogue?” 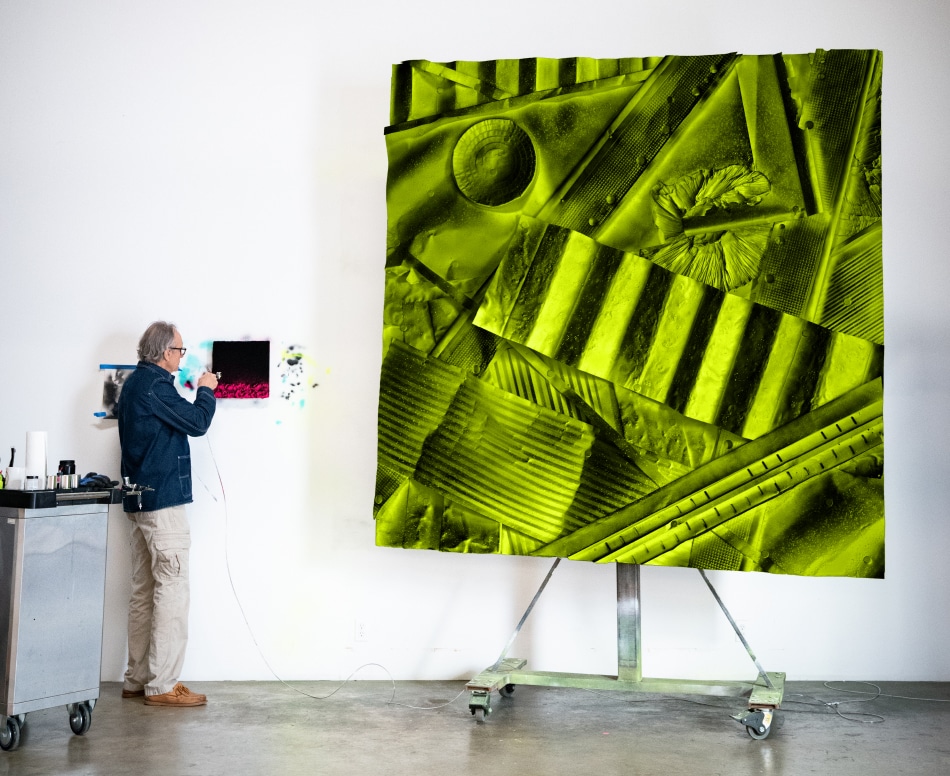 Monaghan focuses on a study in the studio. The large-scale piece at right is an untitled work from 2018. Photo by Paul Costello

But if material has shaped Monaghan’s work, so too has history. Having moved to New York in 1977, he was living near the World Trade Center when the planes hit on September 11, 2001. He visited Chennai, in India, immediately after the 2004 tsunami. And he rushed to New Orleans after Hurricane Katrina struck in 2005, joining the relief effort and living “with people surrounded by ruins,” he says. His artistic endeavor is also an attempt to make sense of this devastation and of his experience.

Eames and Stokke Tripp Trapp chairs surround the Alvar Aalto 81b table in the kitchen. A Louis Poulsen PH5 pendant lamp hangs overhead, while an untitled 2017 piece by Monaghan hangs over a 1930s sofa. Among the artworks on the wall at right are pieces by Sarah Moon, Jim Marshall, and Robert Polidori, Monaghan’s collection of Clarice Cliff Bizarre pottery sits on the shelf above it all. Photo by Paul Costello

Monaghan’s studio is filled with the junk he collects; starting an artwork involves simply arranging it. “I’ll pull things off and put things on, and then I’ll start painting it,” he explains, “and that will reveal more of what those shapes are. And then, eventually, they resolve themselves into some sort of order or disorder.”

In painting the final composition, Monaghan nods to still lifes and the ways the Old Masters toyed with light and perceptions of space. He may paint three-dimensional objects to appear flat, for instance, or add black shading to make flat ones look more voluminous. The idea, he says, is to create a challenging dialogue, forcing viewers to rethink what it is they’re seeing.

The newer works also use unexpected, even lurid, colors that Andersson sees as Pop influenced. “I think Pop art did a lot for the recognition that color tells many different stories,” Monaghan acknowledges. “I like the stories that colors tell.” 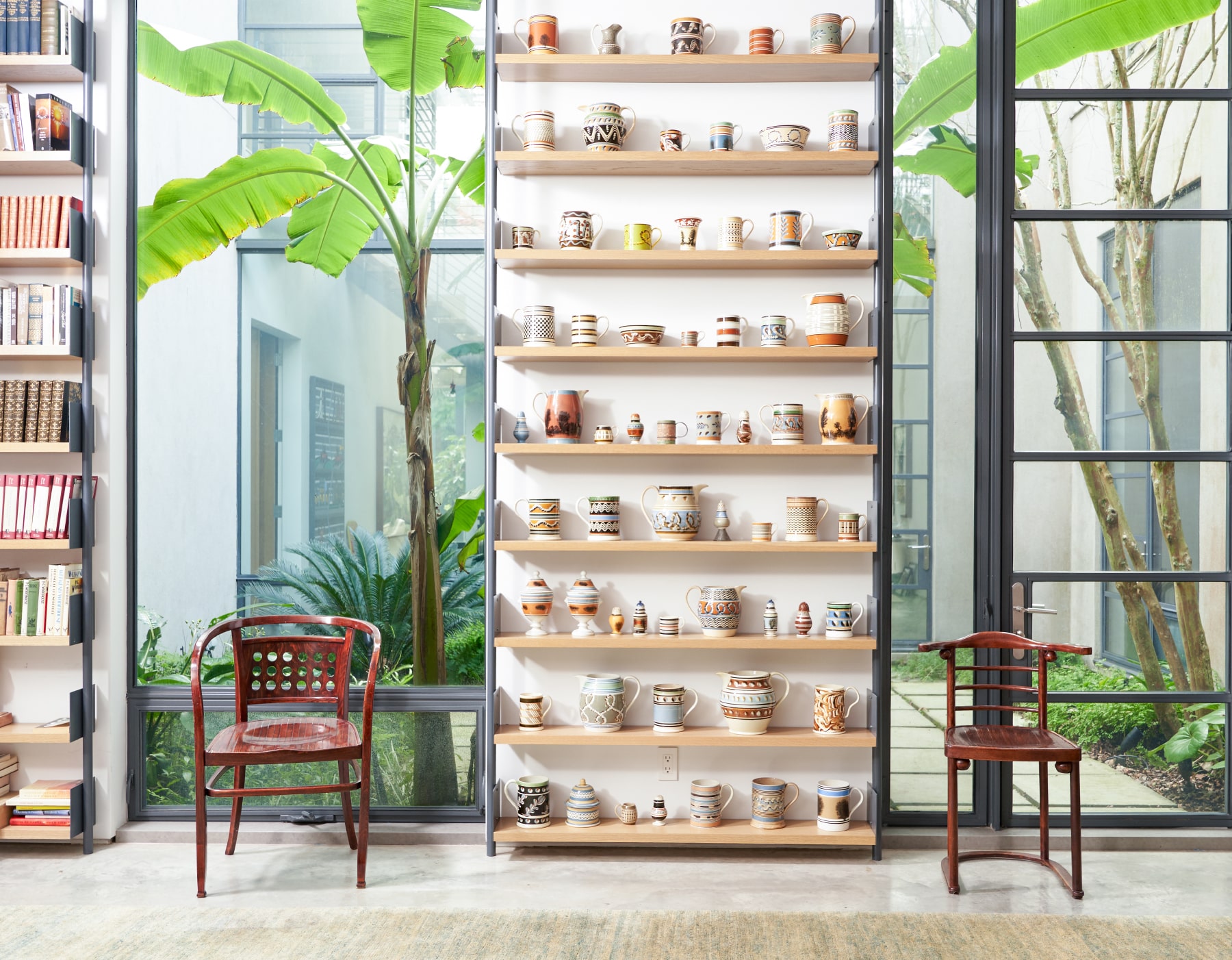 The scavenging and collecting that informs Monaghan’s art does not stop at the studio door. A passionate collector of contemporary art, he is also fond of mid-century design. The walls of his expansive home, which he designed himself, display paintings by Al Held, Carroll Dunham, Mel Kendrick, Richard Artschwager and Ellsworth Kelly, while furnishings by Eero Saarinen and Marcel Breuer, as well as post–World War II Case Study House pieces, fill the sunlit rooms. Over the years, he has also built, and occasionally deaccessioned, collections of signs (“All the great colors and all the great shapes!”), Clarice Cliff pottery and Native American textiles, which he admires for “the ways design and pattern in the weaving are built into the object.” He also collects and fabricates model trains and railroads, a hobby that, in turn, he says, has enhanced his art by improving his airbrushing ability. 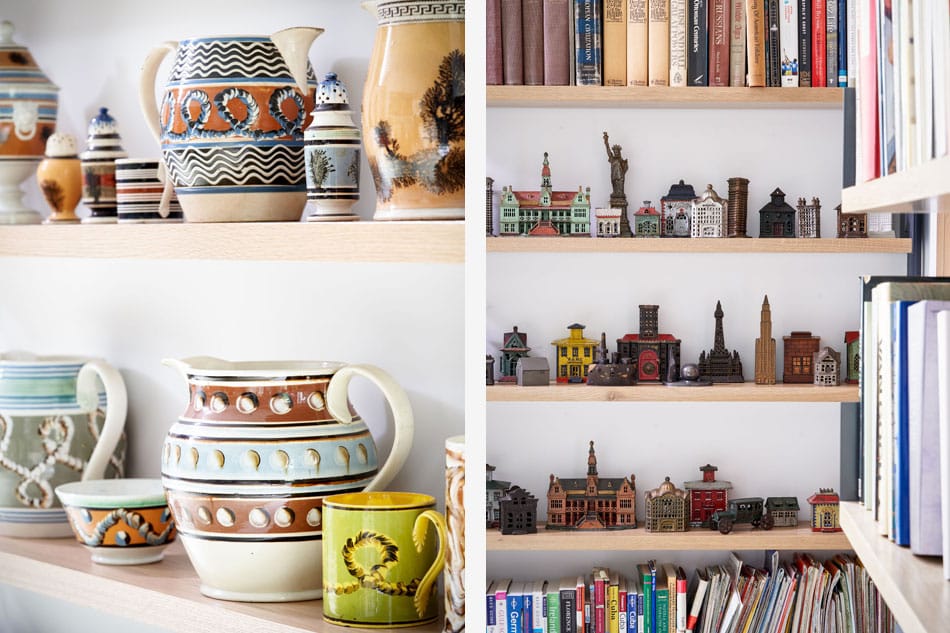 Monaghan’s many collections include glassware, Native American textiles, model trains and pottery. Mochaware, pictured at left, was popular in the 18th and 19th centuries. Shelves in the study also display an assortment of late-19th- and early-20th-century cast-iron still banks, which he’s been amassing for 25 years. Photos by Paul Costello

But if Monaghan’s constructions form something of a self-portrait, embodying his own life and loss, they are primarily a portrait of America. Andersson describes them as an elegy for “a kind of America that is no longer.” More than that, they are a celebration of an America we still treasure, remade and immortalized in art.