William Waldron Has an Eye for Beauty 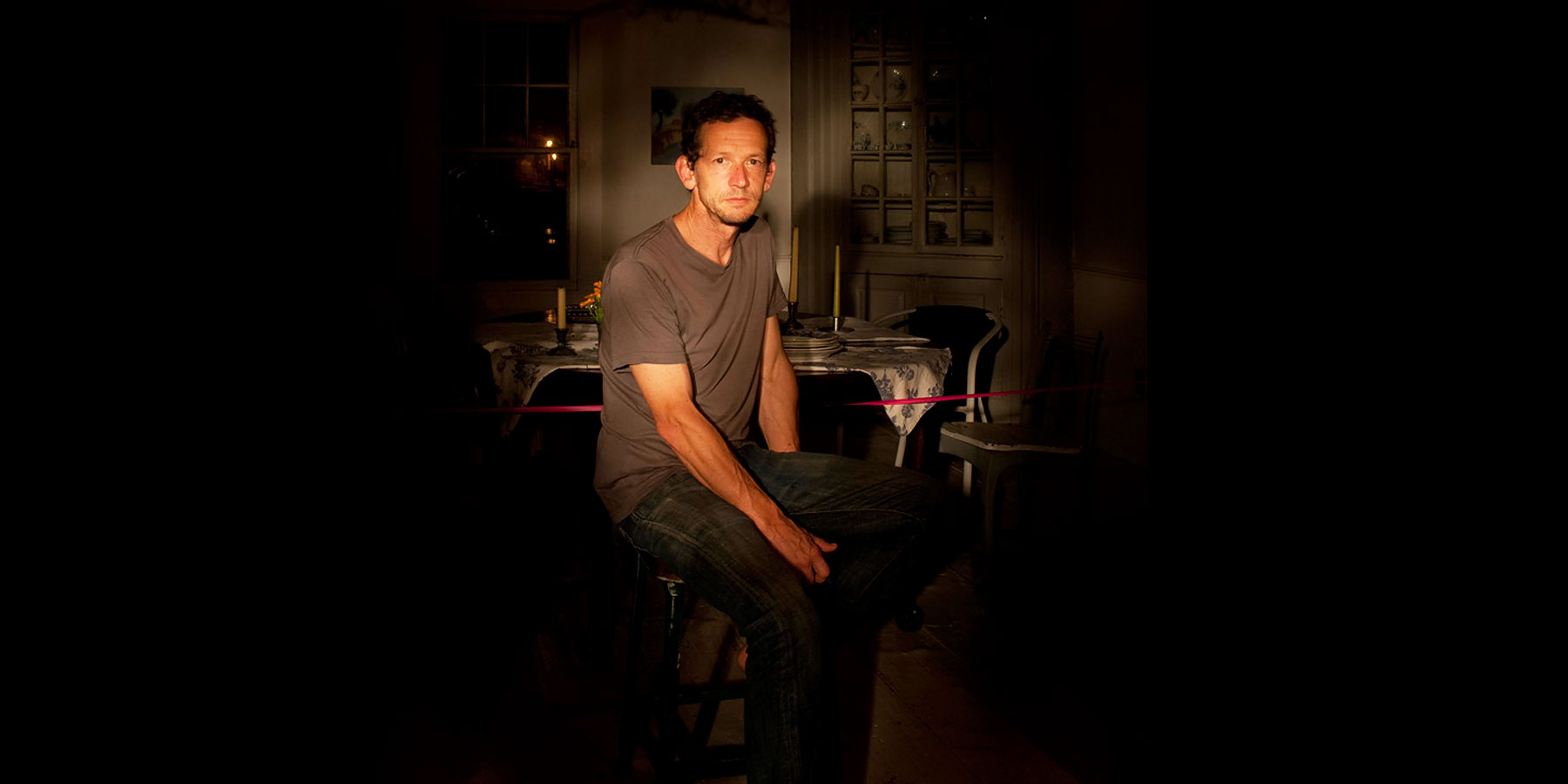 His genius for making every interior look “more beautiful than it has ever been” has made him one of the world’s most sought-after photographers. 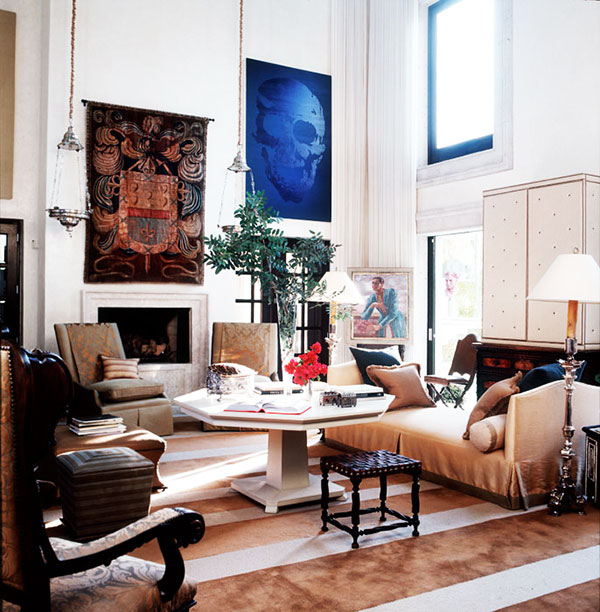 November 14, 2012A house designed by Ray Booth in Mexico’s San Miguel de Allende, which appeared in Elle Decor in 2009, is just one of the memorable interiors
William Waldron has photographed during his distinguished career.

Whether it’s shooting Reese Witherspoon’s Ojai, California, weekend digs (complete with pigs and goats) or the 12-foot-wide Greenwich Village townhouse of Marc Jacobs president Robert Duffy, William Waldron loves to rise to the challenge of delivering the visual goods. “It’s thrilling to portray a room as more beautiful than it has ever been,” says the New York–based photographer.

After a Minnesota childhood spent taking photographs, Waldron was educated at the University of Minnesota and the Brooks Institute of Photography in Santa Barbara, California, where he says he was “taught a very strict foundation in photography.” In 1981, he moved to New York City, hoping to parlay his passion into a career. Fast-forward three decades and his résumé encompasses every magazine worth shooting for, including Elle Decor, Vogue, InStyle, Harpers Bazaar, Vanity Fair, Interview and Architectural Digest, as well as such corporate clients as Mercedes Benz, Gap, Coach, Sony and Target. Adept at photographing a wide array of subject matters, from lush travel spreads to still lifes, Waldron often returns to the subject of interior spaces.

Waldron and his wife, Malene, their two sons, ages 15 and 17, and two dogs split their time between Manhattan and an upstate New York farmhouse on 77 acres that dates from 1760. (The Waldrons’ careful restoration of the house was chronicled in the December 2007 issue of Elle Decor.) There, Waldron has a darkroom where he prints personal work. “For me, so much of photography is about translation,” he says. “A photograph of an interior attempts to distill the essence of a space in two dimensions.” 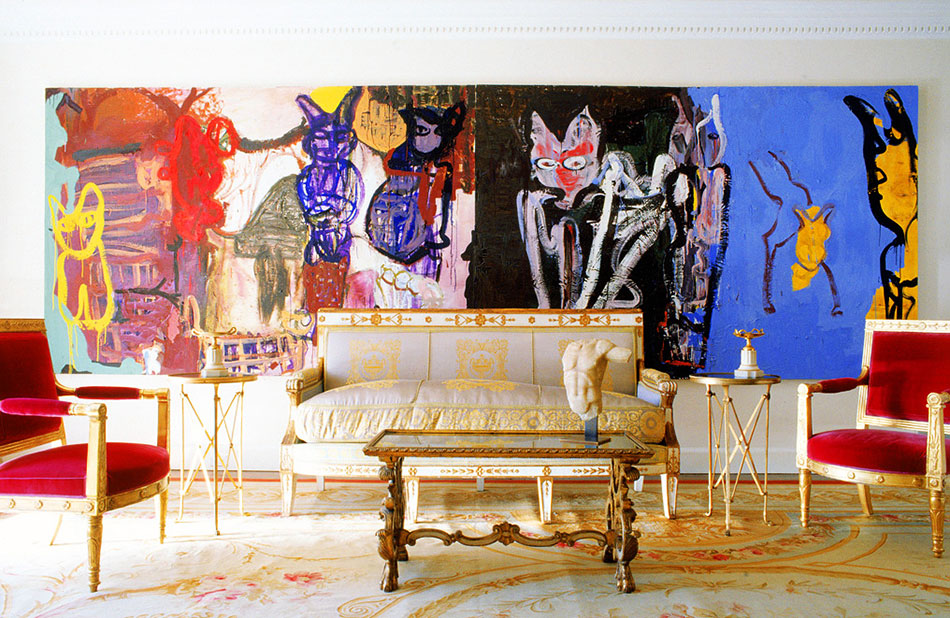 “It’s thrilling to portray a room as more beautiful than it has ever been,” says Waldron, who shot this New York living room for House & Garden. 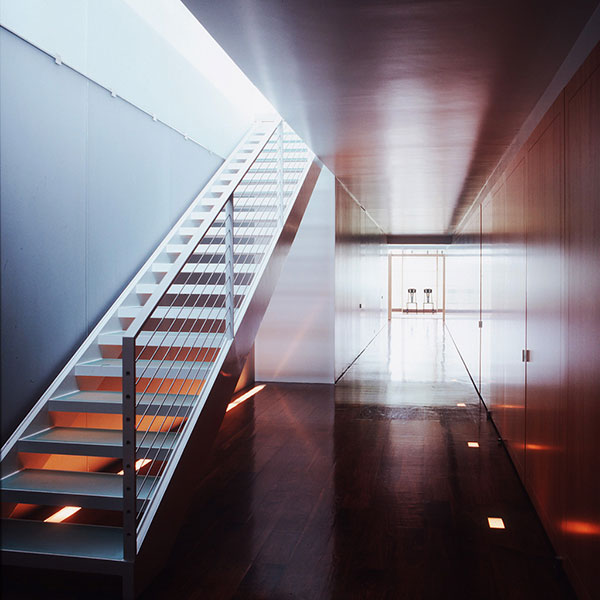 This sleek hallway is from an upstate New York house designed by Thomas Phifer. “A photograph of an interior attempts to distill the essence of a space in two dimensions,” Waldron explains.

SS: TELL US ABOUT YOUR FIRST BIG BREAK AND HOW YOU TRANSITIONED INTO A CAREER AS A PHOTOGRAPHER.

WW: In 1987 I just decided to go for it. I literally went to every magazine I could find in New York, on my bicycle. Back then you could make an appointment with the art director. I would go to Vogue and Sports Illustrated on the same day. As far as I was concerned, it was all photography and that’s all I cared about. I carried a carousel of Kodachrome slides, a projector and black-and-white prints in a backpack. I met lots of people and heard very flattering things about my pictures, but I didn’t get lots of work. One day I went to House & Garden to see Lloyd Ziff, the creative director. I showed him the pictures and he called in the art director, Karen Lee Grant, who a few days later asked me to take portraits of the stonecutters at the Cathedral of St. John the Divine, which has been under construction since 1892. Months later, Grant was sending me to photograph a house in Millbrook, New York, for a feature story.

IS THERE A PHOTOGRAPHER WHO INSPIRED YOU IN YOUR EARLY DAYS?

I came to New York right out of school in 1981, to work for the fashion and music photographer Art Kane, who was my idol. I admired how he took everything from the great early-20th-century American photographers and married it with the modern European fashion of edgy masters like Guy Bourdin.

HOW DID THIS AFFECT YOUR WORK AT THE TIME?

At the Brooks Institute I mimicked the metaphor, poetry and pure beauty of Art Kane’s pictures until I realized that painting, photography, literature and music transport you and inspire you in such a way that you no longer need to copy your idols. 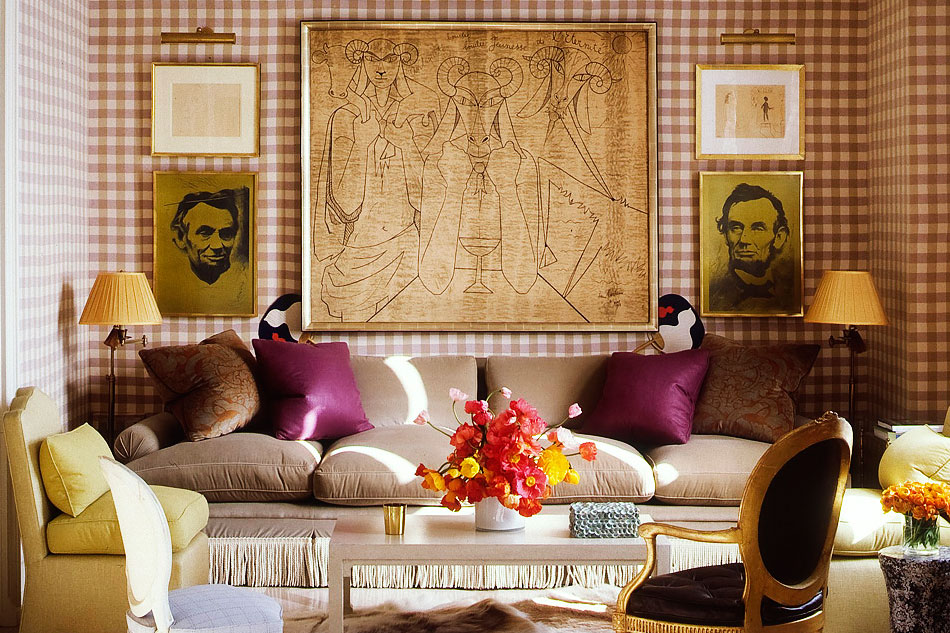 For Elle Decor, Waldron shot the home of Jeffrey Bilhuber, whom he describes as “one of the most fearless decorators I know.” 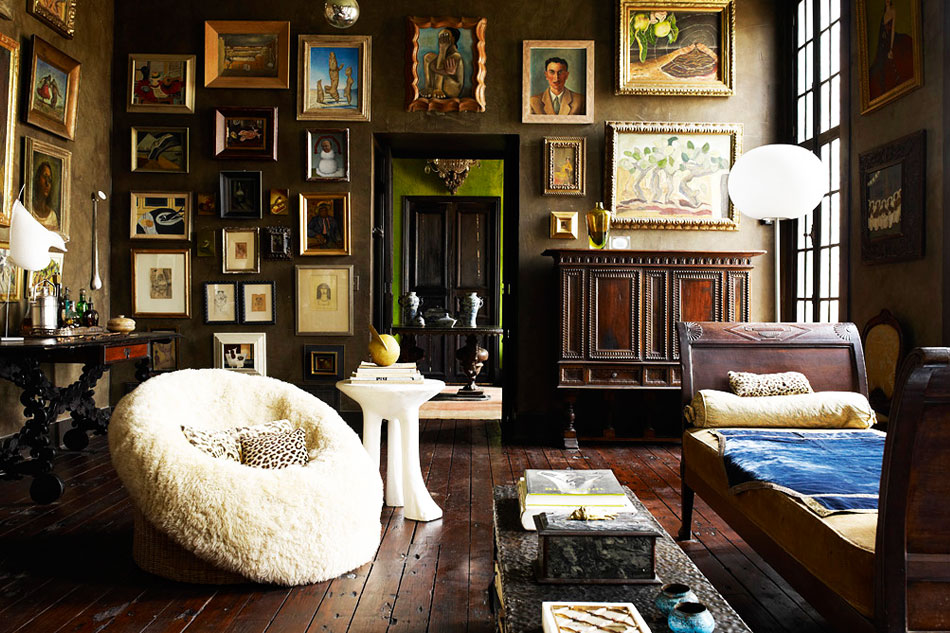 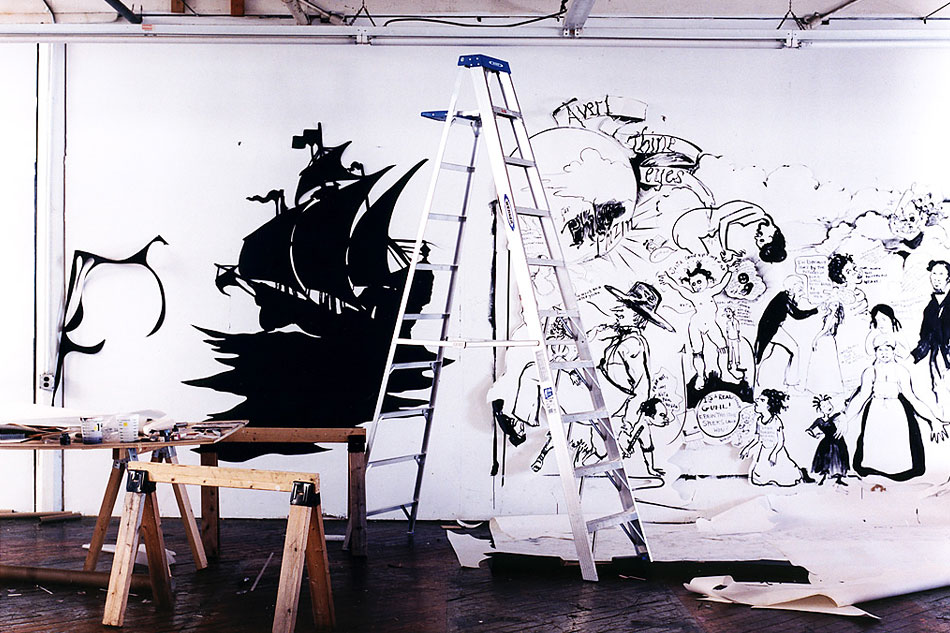 “Kara Walker nursed me through a one-hundred-and-three-degree fever during this shoot for German Vogue,” Waldron recalls of his visit to the artist’s Rhode Island studio.

TELL US ABOUT ONE OF YOUR MOST UNUSUAL SHOOTS.

In the mid-1990s I was doing a series of stories for German Vogue on artists such as Ross Bleckner, Dorothea Tanning and Alex Katz. One January, I was sent to Providence, Rhode Island, to the studio of the newly sensational Kara Walker. I woke that morning with a fever of 103 degrees, but I had to go shoot the story. So I wrapped myself in a wool blanket and lay down in the back of a minivan while my assistant drove us from New York City to Providence. I climbed the stairs and stumbled pale as a sheet into Kara’s beautiful, airy studio and was met by the most lovely, funny, warm and calm (not to mention gorgeous) woman. Kara made tea and suggested that we just sit for a while and only work when I felt like I could. I took about 20 pictures that day, several that I still love. 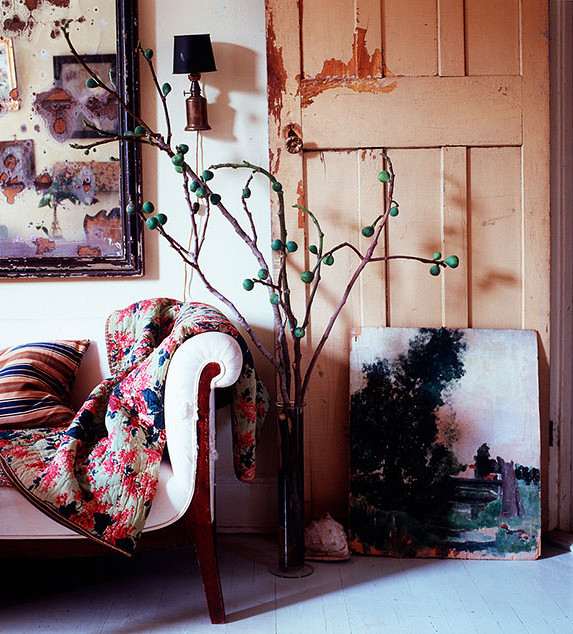 OF THE HUNDREDS OF HOUSES YOU’VE SHOT OVER THE YEARS, IS THERE A PARTICULARLY MEMORABLE ONE?

I loved artist and designer John Derian’s tiny tenement apartment on the Lower East Side of New York, which I shot with Anita Sarsidi for Elle Decor back in 2008. It is such a refreshingly personal, genuine and historical home of an artist.

WHAT ARE SOME OF YOUR FAVORITE PLACES TO TRAVEL AND SHOOT?

I’m always down for a trip to New Orleans, the city in the U.S. with the truest sense of place, extraordinary architecture and food.

WHAT KIND OF CAMERA DID YOU USE WHEN YOU FIRST STARTED OUT AND WHAT DO YOU SHOOT WITH NOW?

I’ve been a photographer since I was five, so I guess I started with the cartridge film camera called an “Instamatic.” My parents bought me a 35mm rangefinder when I was eight and I was off. As a photographer I have shot almost exclusively with a Hasselblad, now of course with a digital back on it. 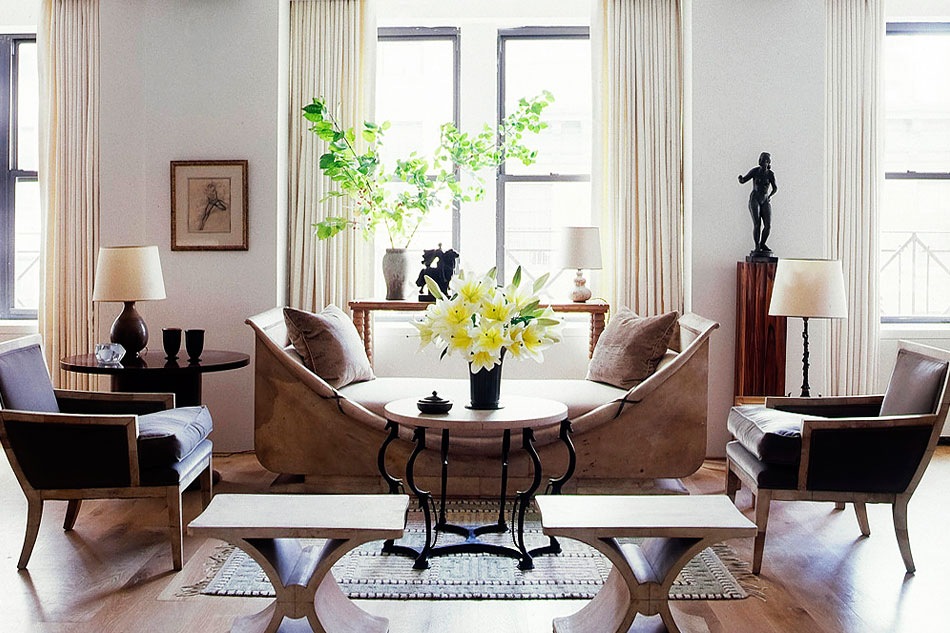 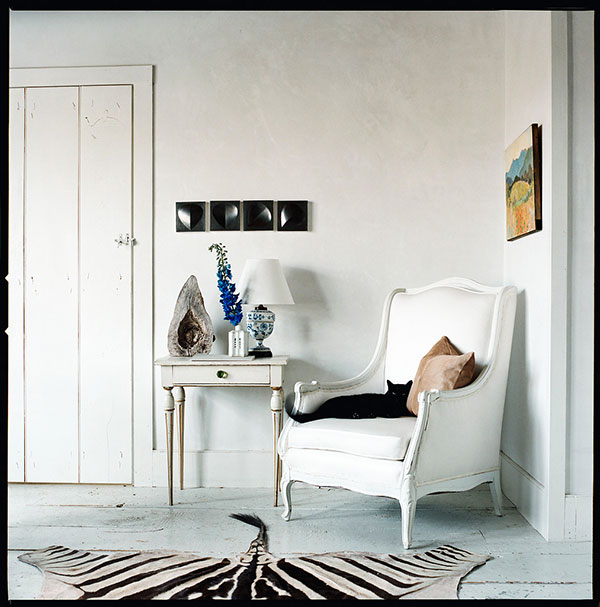 IF YOU HADN’T BECOME A PHOTOGRAPHER…?

Believe it or not, I’ve always kind of wanted to be on the radio. I love how expressive a man can be with only his voice. I think it’s similar to photography in a funny way — how much one can express between the lines.

HOW HAS TECHNOLOGY IMPACTED YOUR ART?

Almost not at all until two years ago, when I was suddenly shooting almost everything digitally. It’s actually much more work to capture and deliver digital files that are to my liking. A raw file is an incredibly malleable thing, a lot like taking a negative into the darkroom and printing it.

TELL ME ABOUT ANY FUN PROJECTS IN THE WORKS.

Motion! Everything now has to be considered for the iPad or the web. I’m interested in how to make moving content without making a movie — in other words, how are we able to make an interesting segment that doesn’t necessarily require a narrative, such as taking readers through a house without it feeling like a tour.