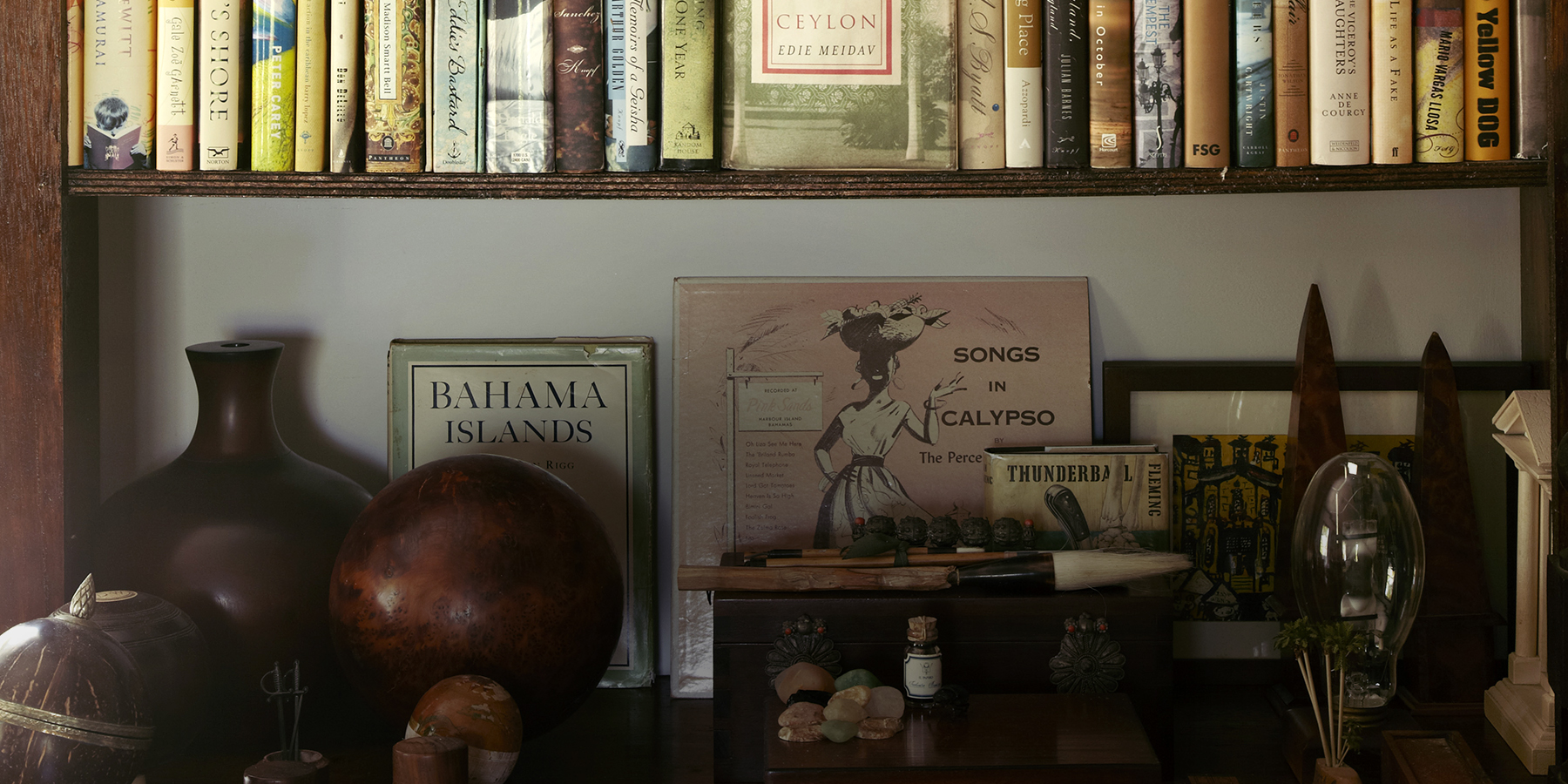 In their latest books, a trio of renowned women designers—Anouska Hempel, Penny Drue Baird and India Hicks — expound on three distinct approaches to design that affirm their places at the forefront of the industry.

Anouska Hempel, Penny Drue Baird and India Hicks: three powerhouse names in design, and for good reason. Over the course of their years in the industry, they have distilled their experiences into distinctly individual styles, and their respective outputs offer three unique perspectives on the idea of “home.” Their tastes and motivations could hardly be more different — Hempel’s high-concept London look is psychic universes away from Hicks’s barefoot-and-sun-baked Bahamian idyll. And that, indeed, is the point. Any designer’s mature style, no matter what it is, broadcasts the courage of her convictions. These women know precisely who they are and the nature of the visions they want to convey. And, after perusing projects from their new books, you will too. 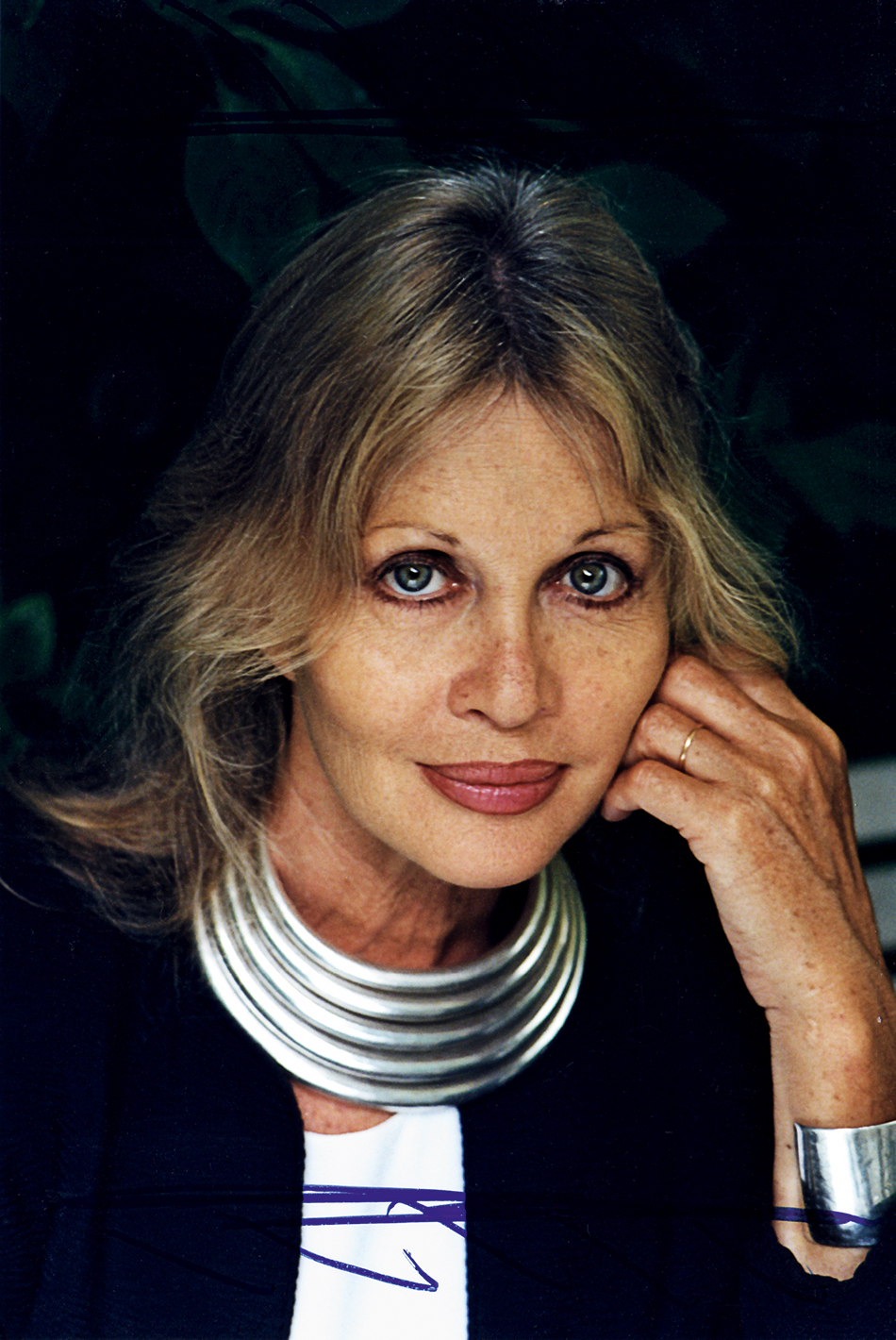 Designer Anouska Hempel can be “both a princess and a trooper,” writes Marcus Binney, the co-author of her new monograph. Top: A bookish vignette featured in India Hicks’s Island Home. Photo by Peter Simpkin, courtesy of Rizzoli

For the New Zealand–born, London-based Anouska Hempel, interiors are about narrative and mystery. She makes this abundantly clear in her latest tome from Rizzoli, which she co-wrote with Marcus Binney. The intent of this designer’s show-stopping environments, no matter their genre, is to transport. When working commercially, Hempel’s style is decidedly distinctive — be it The Hempel hotel (spare, white and cool) or Blakes (replete, red and worldly), both in London. Residential projects given the Hempel treatment are equally singular, emerging, perhaps, as a minimalist glass box in Salzburg or exuding the gilded, Belle Epoque-style elegance of a pavillon de plaisance in Vaduz, Lichtenstein.

“It’s the layering of one’s imaginative life on a decorative level,” Hempel tells journalist Belinda Harley in an excellent essay featured in the book. “You have to add to it every month or two, or year or two… The client needs to understand that this doesn’t just happen out of the blue, finished…Don’t just think ‘I have done that.’ Never, never stop.”

Such decorating diligence can be glimpsed in every inch of the ravishing Cole Park, the country home in southwestern England Hempel shares with her financier husband, Sir Mark Weinberg. There, the details of every nook and stair landing offer a visual journey to another geography or a taste of other cultures, and it is Hempel’s capacity for seamlessly integrating an astonishingly varied array of objects and effects that defines her as a great designer. As is common with greatness, Hempel’s talent is often accompanied by a bit of imperiousness, as acknowledged in Binney’s introduction. “She can be both a princess and a trooper,” he writes, “with the vocabulary to match.” Even her exercises in Zen simplicity, such as her newest London hotel, La Suite West, exude a sort of aggressive rigor. Hempel, now 73, was always a force of nature — and, as this publication proves, she still is. 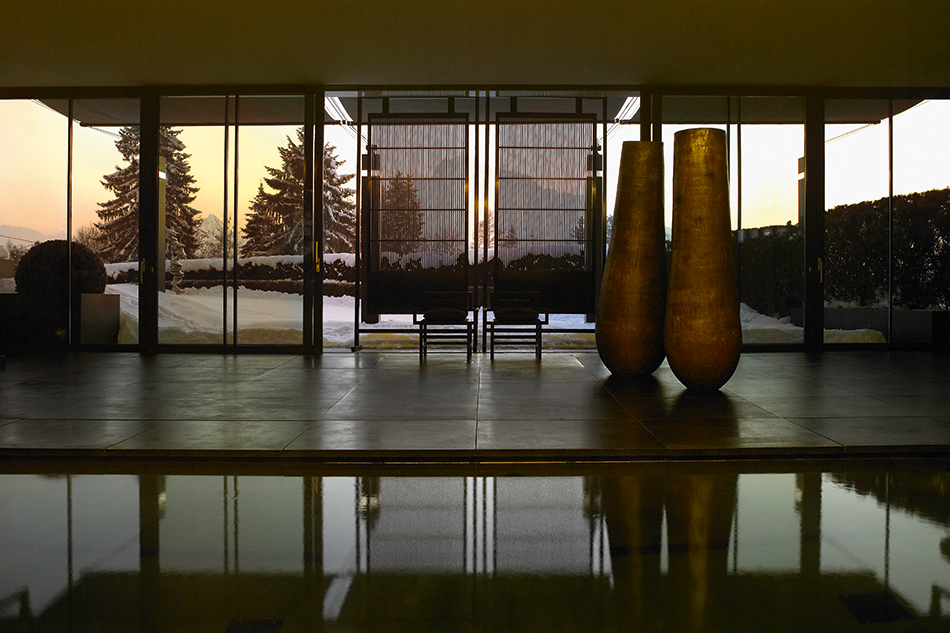 “If a choice has to be made between style and comfort,” writes Binney of Hempel, “style wins every time.” Here, the spare, sleek interior of a house she designed in Salzburg, Austria, is touched by the day’s first rays of sunrise. Photo by Marina Faust, all photos courtesy of Rizzoli 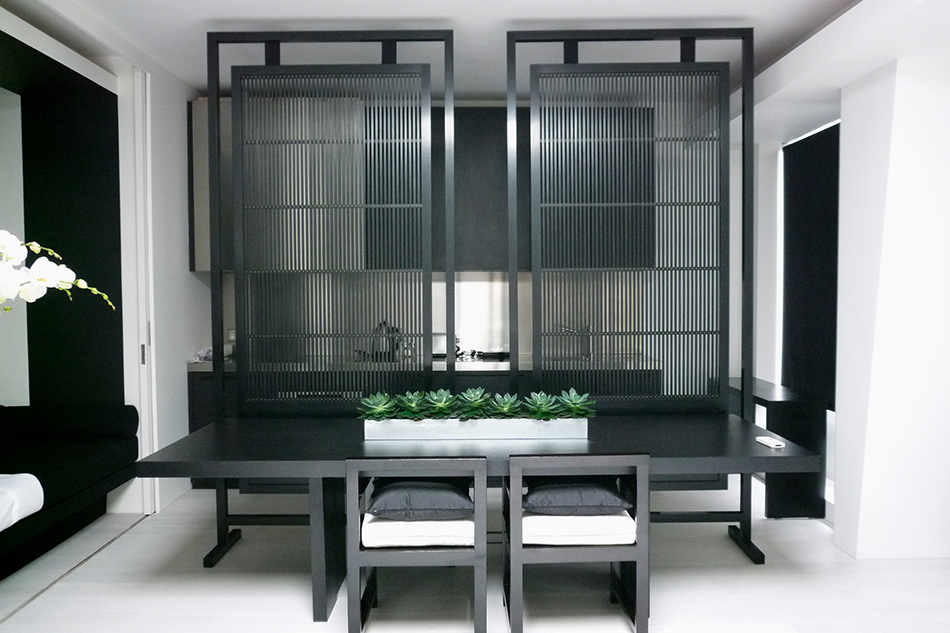 La Suite West, Hempel’s newest London hotel, is an exercise in Zen simplicity; in this guest room, she deploys a favorite tactic, lattice screens, to imbue the space with a sense of mystery, partially obscuring the kitchen in a way that sparks our curiosity to look behind them. Photo by Lady Weinberg 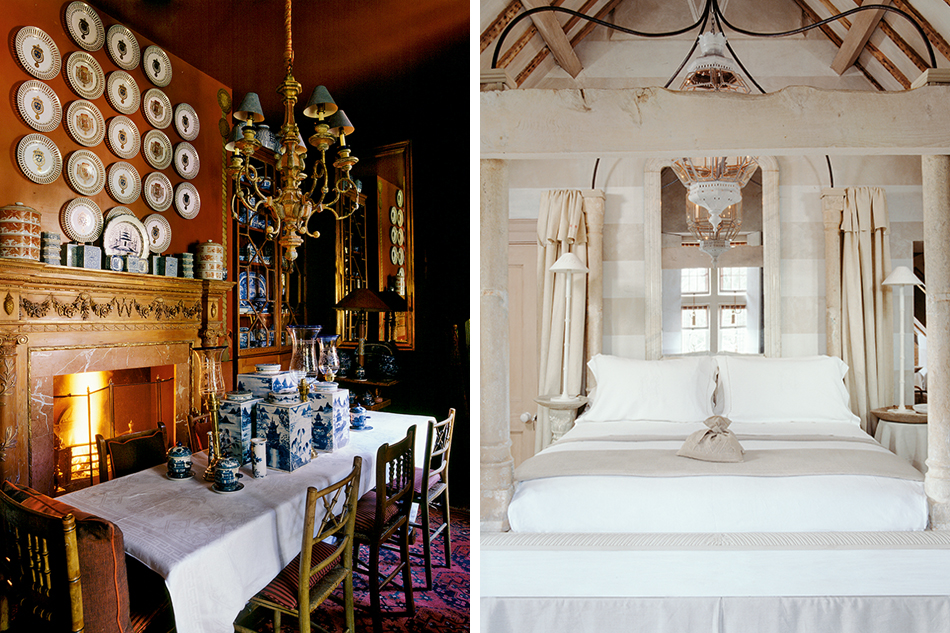 Left: As evident in the breakfast room of Cole Park, the designer’s country residence in southwestern England, porcelain displays are a constant feature of a Hempel interior (photo by Fritz von der Schulenberg). Right: In this attic bedroom at Cole Park, tall candlestick lamps and the reflection of a stone mullion window give the impression of a crucifix on an altar (photo by Adrian Houston). 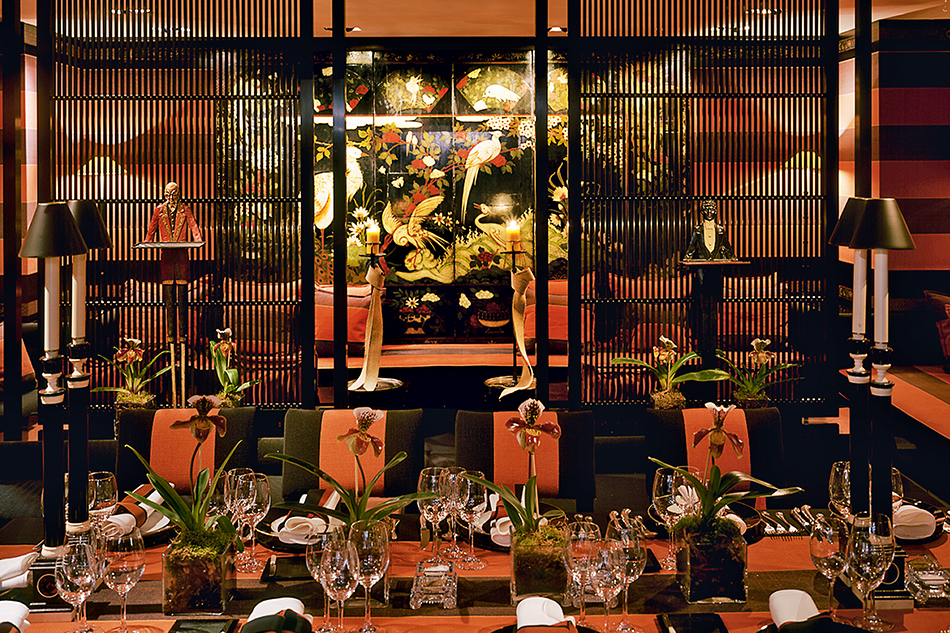 Often described as the first boutique hotel, Blakes opened in London’s South Kensington district in 1978 with variously themed rooms that are consistently decadent; the basement lounge, called the Chinese Room, is richly decorated in red and black and sometimes referred to as the “Opium Den.” Photo by Adrian Houston 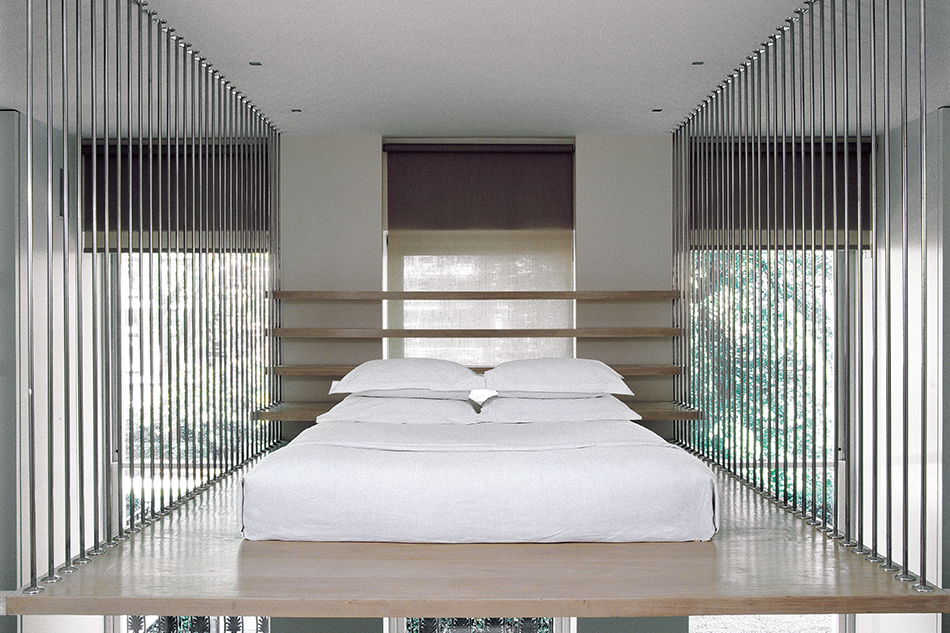 Simple, open spaces in white and gray and cool minimalist forms define The Hempel, which opened in London’s Hyde Park in 1997: The hotel’s 180-degree difference from the sumptuous opulence of Blakes demonstrates the designer’s range and versatility. Photo by Kim Zwarts 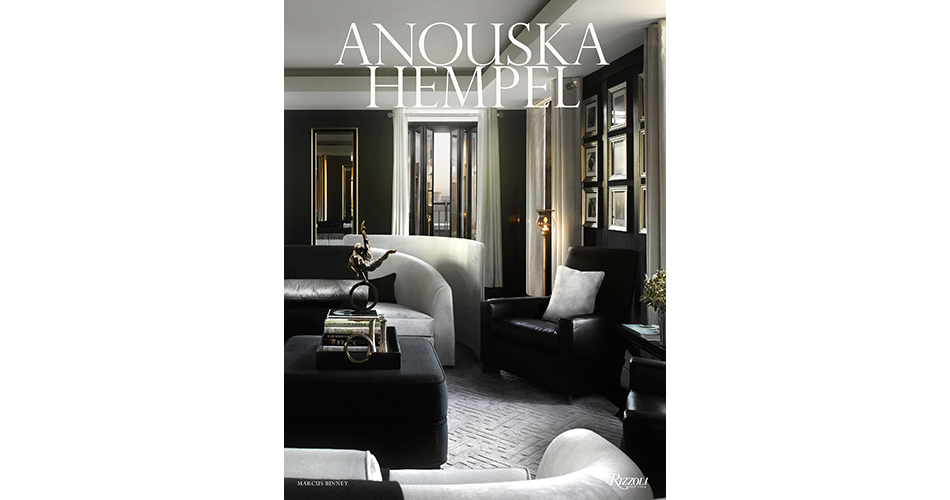 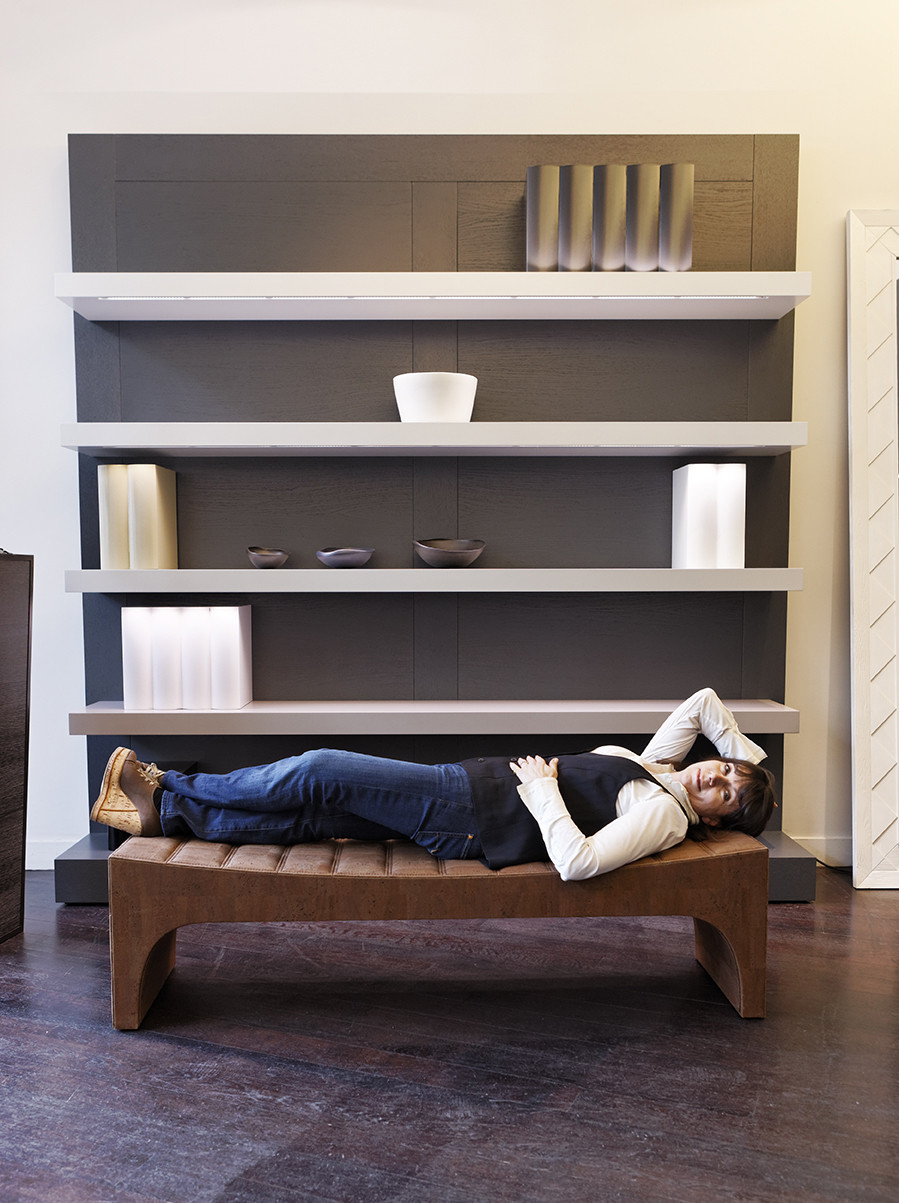 Although based in New York, designer Penny Drue Baird has a passion for all things French. Her interiors, however, perfectly fuse that culture’s tendency toward high style with a modern-day — and particularly American — sense of durability, practicality and comfort. Photo by Francis Hammond, courtesy of The Monacelli Press

The 50-something New York–based designer Penny Drue Baird has committed her career to extolling the virtues of the French look, as her previous books, Bringing Paris Home and The New French Interior, attest. Yet the pages of this latest volume, penned by Baird herself, suggest that her particular (and considerable) contribution to design actually lies in her ability to frame Gallic styles through an American lens.

To be sure, her work often incorporates salon- and château-like details drawn directly from France — not to mention plenty of finds from the Marché Biron and Marché aux Puces, in Paris. Take, for example, a velvet-tufted niche housing a Jules Leleu buffet in an apartment in a grand, Rosario Candela–designed Upper East Side building; a library with tooled-leather walls in a Mediterranean-style Palm Beach home; or bistro chairs in the kitchen and breakfast room of a brick manor house in Farmington, Connecticut. Baird even gives a quintessentially American barn in Bucks County, Pennsylvania, the French treatment, transforming it into a guesthouse with French country tables and carriage lights. But her rooms are also suffused with a distinctly American tendency toward casual comfort — often filled with soft, upholstered furniture — and many accommodate children in a way that is decidedly un-French. “We’ve all been to ice-cold homes and wondered, ‘They’re raising children here?’ ” she writes in her introduction. And, whereas Hempel imposes a disciplined “all or nothing at all” attitude on her interiors, Baird is happy to compromise, creating rooms that embrace various eras and techniques and remain anchored in the present even as they hark back to other eras. “The trick is creating a real-life setting to feel perfectly at home in and being practical at the same time,” Baird writes. As she proves in Dreamhouse, elegance and practicality are not mutually exclusive. 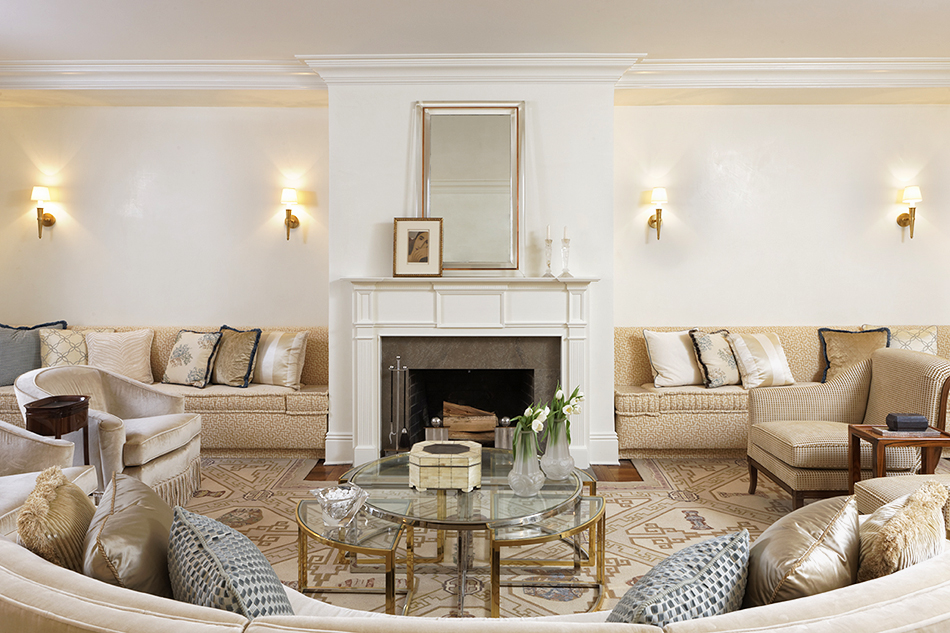 Baird met the challenge set by this apartment — creating what she calls a “grown-up” entertaining environment for a couple with children — by mixing sophisticated elements like Art Deco–inspired alabaster chandeliers and mother-of-pearl wall insets with practical ones, such as darker fabrics and patterned carpets. Photo by Francis Hammond, all photos courtesy of The Monacelli Press 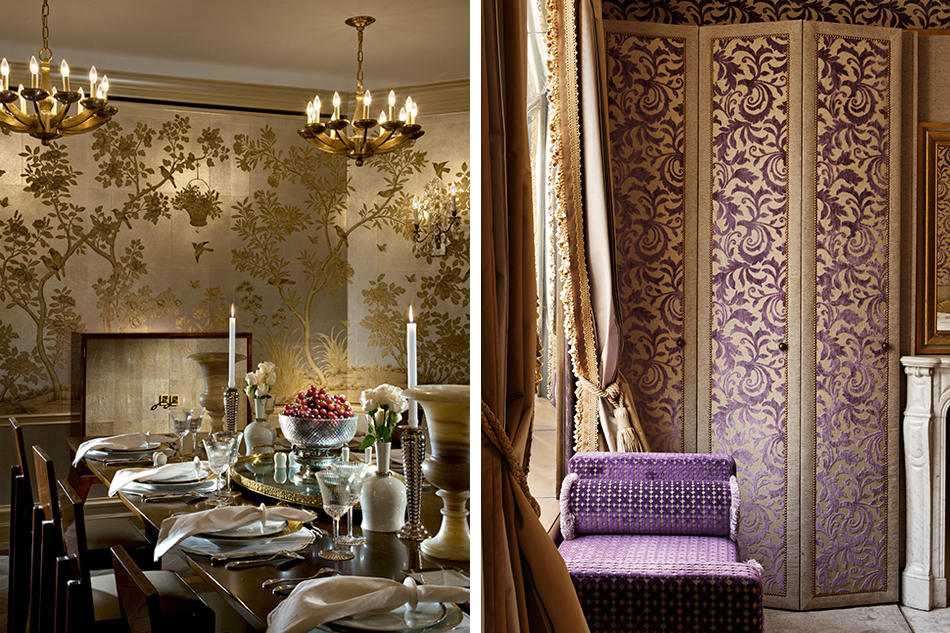 Left: Baird mixed Art Deco chandeliers from Carlos de la Puente with historic Gracie wallpaper in this New York City apartment (photo by Durston Saylor). Right: A residence in the first arrondissement of Paris, meanwhile, which she designed for a savvy Manhattan couple, demonstrates a French salon–style use of sumptuous fabrics and details (photo by Francis Hammond). 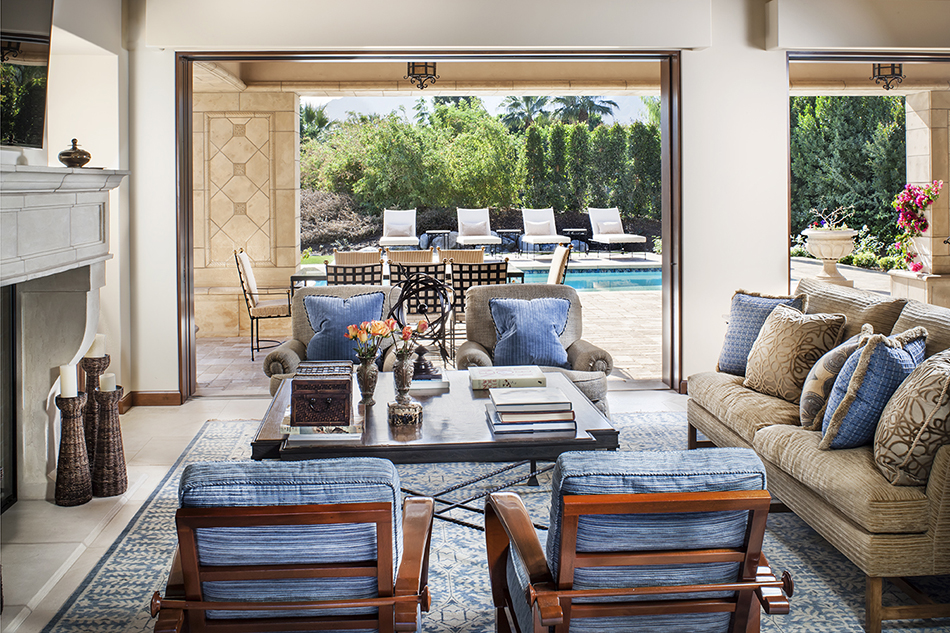 For this Palm Springs vacation home, a stone-and-stucco nod to the aesthetic of Tuscany, the designer complemented the natural elements of Mediterranean architecture with accent notes of French blue, taken from an heirloom rug in one of the house’s main entertaining spaces. Photo by Grey Crawford 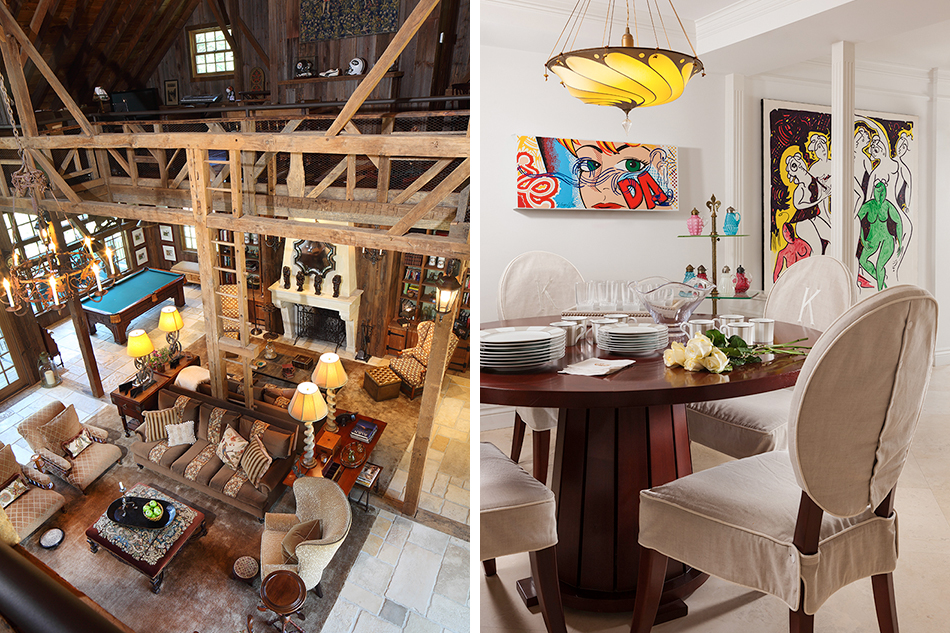 Baird regularly embraces compromise and variation, softening the old wooden frame of a farmhouse with lush communal seating areas (left, photo by Matt Wargo), or brightening a clean, neutral palette with a vibrant accent — as with the contemporary art hung around the dining table at this seaside pied à terre (right, photo by Nick Sargent). 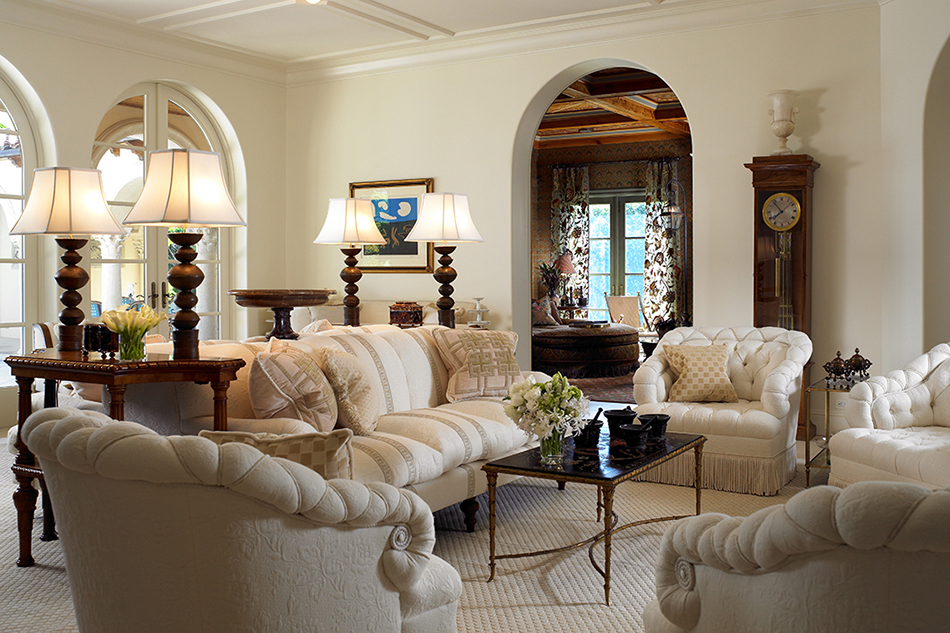 In a Spanish-inspired Palm Beach residence, the designer took advantage of the living room’s stately columns and stunning views by bringing in a back-to-back sofa — one side facing the water, the other facing the music area — and chairs copied from a 17th-century French salon, trimmed with passementerie. Photo by Kim Sargent 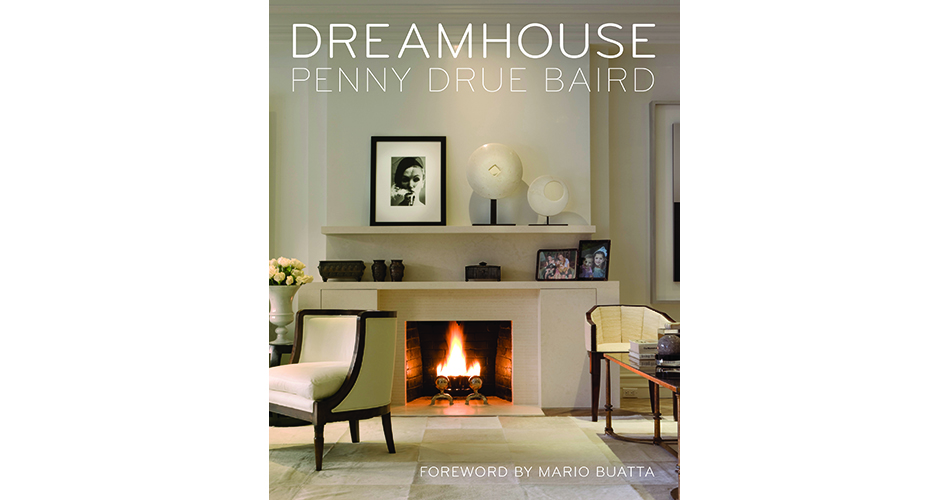 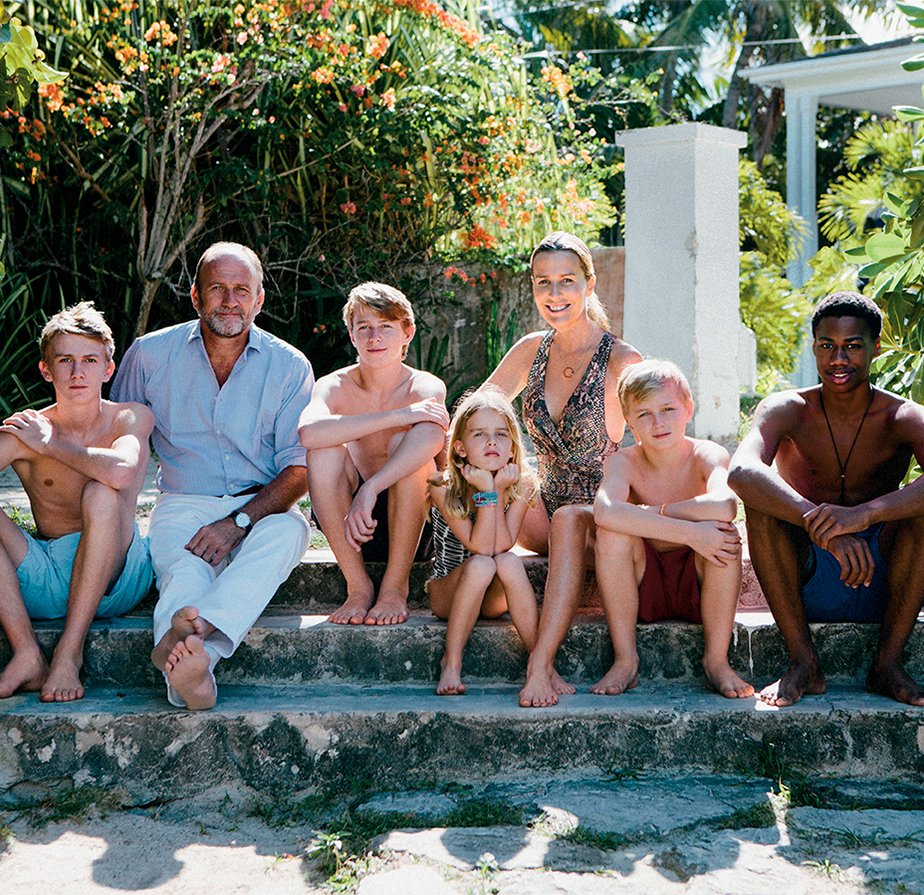 India Hicks, who left England for the Bahamas nearly two decades ago, sits with her brood on the garden steps of Hibiscus Hill, the island home she shares with her partner, fellow designer David Flint Wood. Photo by Brittan Goetz, courtesy of Rizzoli

“It took many years before I dared to call myself a designer,” admits 47-year-old India Hicks in her latest volume about island living. (Island Life and Island Beauty precede this one.) Her father, the legendary interior designer David Hicks, cast a long shadow, and it was India’s brother Ashley who followed immediately in his professional footsteps. India, after modeling for a time, ran off to the Bahamas, fell in love with innkeeper-entrepreneur and serial house-renovator David Flint Wood, had four children and fostered a fifth (whom the couple later adopted). But she ended up working in a vein similar to that of her father after all, founding a company that designs bedding, accessories, jewelry and beauty products.

This book focuses specifically on the decoration of Hibiscus Hill, Hicks’s first home with Flint Wood, which they bought on the Bahamas’ Harbour Island when she was pregnant, and is also touched upon in Island Life. “Tory Burch came for a drink one evening,” Hicks writes. “She looked around our sitting room and said how nice it was to see a home so ‘under-decorated,’ ” a comment that led Hicks to muse on her personal aesthetic for interiors. The result of that introspection is this book, a volume that is full of practical advice on, among other subjects, keeping color “to just the odd pop,” displaying collections of everything from baseball caps to paintings, recycling a duvet as seating upholstery and creating themed children’s parties. But it is really also a charming memoir that delivers its decorating tips amid poignant anecdotes, from recollections of her privileged upbringing (her grandfather was Louis Mountbatten, 1st Earl Mountbatten of Burma, and her godfather is Prince Charles, who wrote the book’s forward) to the infrequency of Bahamian mail, her love of Pinterest and experiences with a local cultural celebration called the festival of Junkanoo. More than a monograph, Island Style is a breezy account of Hicks’s cultivated life in the Bahamas — and because of this, it’s an utter pleasure to read. 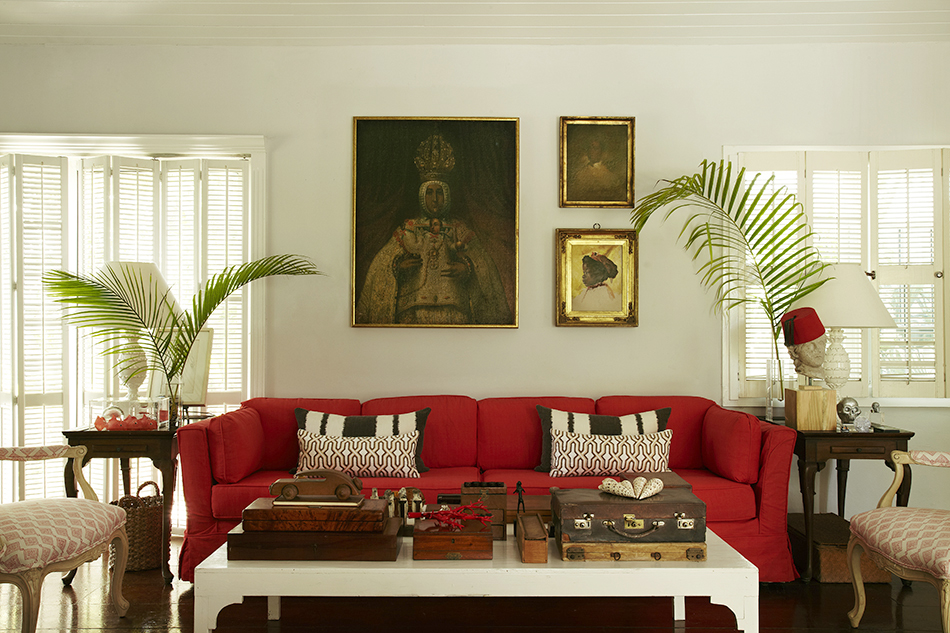 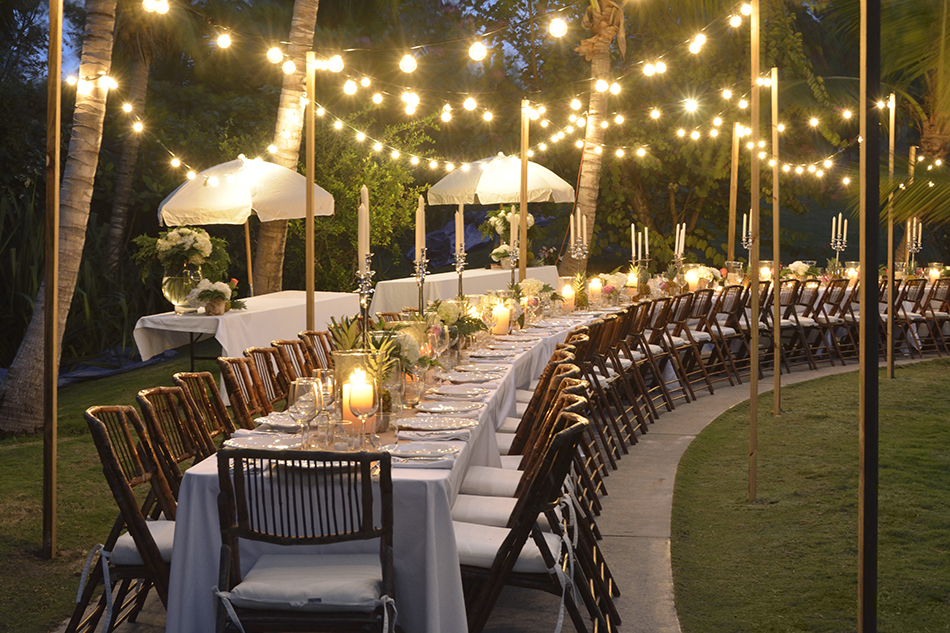 To celebrate having spent 18 New Years together, Hicks and Flint Wood planned a party for 25. At the actual event, however, they ended up hosting 70, accommodating the evening’s guests at a long table set up on their curving driveway — and begging, borrowing and stealing chairs from all over the island. Photo by Vince Klassen 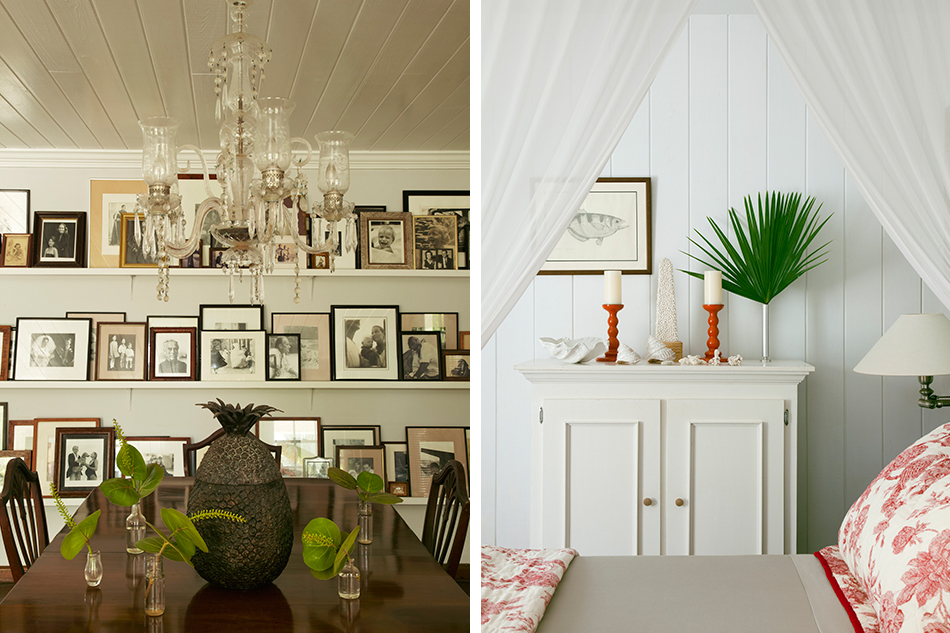 Hicks’s decorating style is whimsical and eclectic, often incorporating found objects or regionally sourced materials: She discovered her dining table and chairs (left) in New Orleans long ago, and the four-poster bed in this guest room (right) was designed by Flint Wood and handmade by a local carpenter. Photos by Miguel Flores Vianna 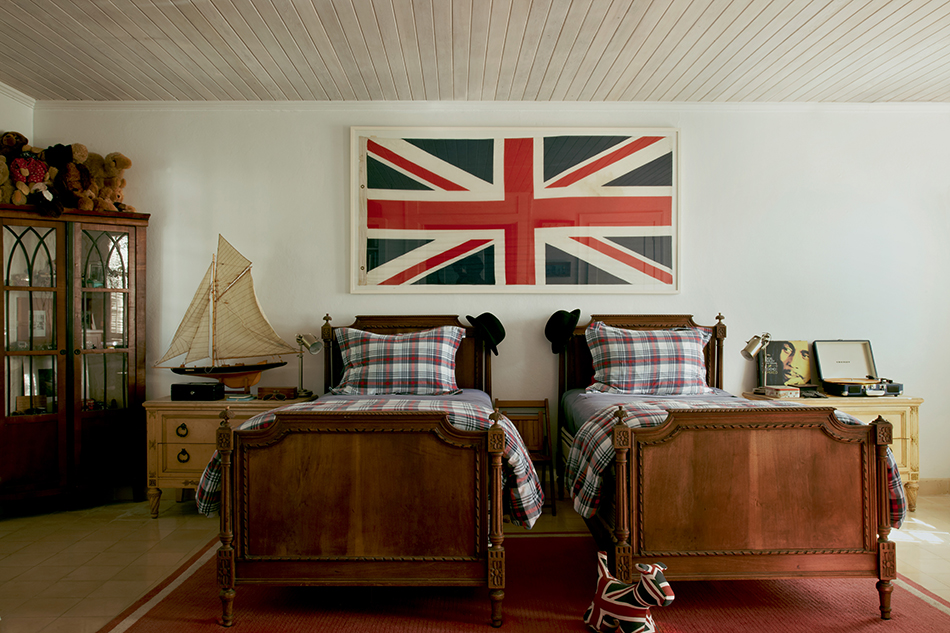 Despite the abundance of Bahamian island-themed motifs, textures and materials throughout Hibiscus Hill — including these palm-tree beds — Hicks and Flint Wood made sure the children wouldn’t forget the other island of their heritage: Britain. Photo by Miguel Flores Vianna 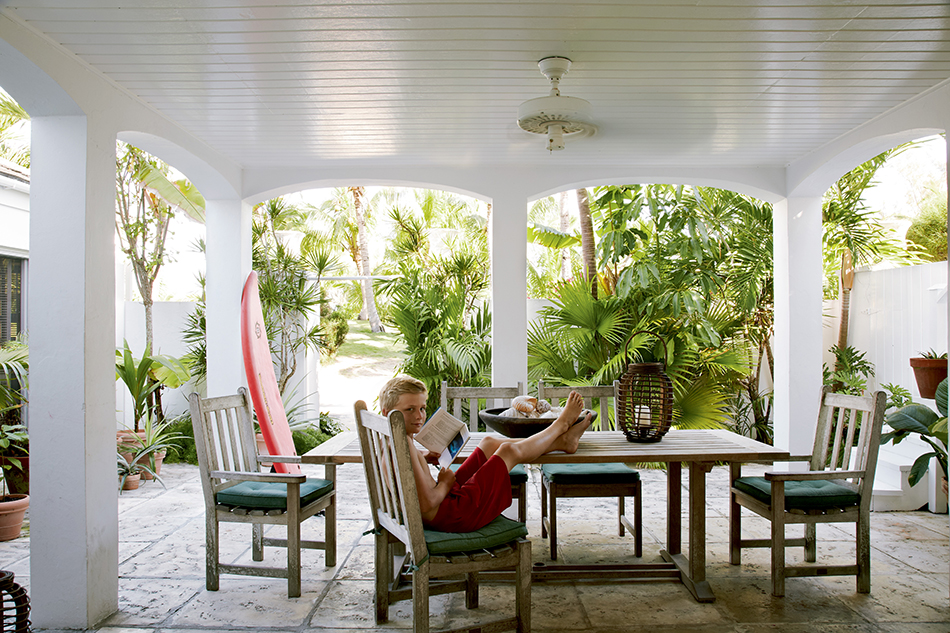 Site of many a family supper, this walled terrace — here enjoyed by the designer’s son Conrad — witnesses its fair share of arguments, says the designer, as both parents and children “jostle” around the table. Photo by Miguel Flores Vianna 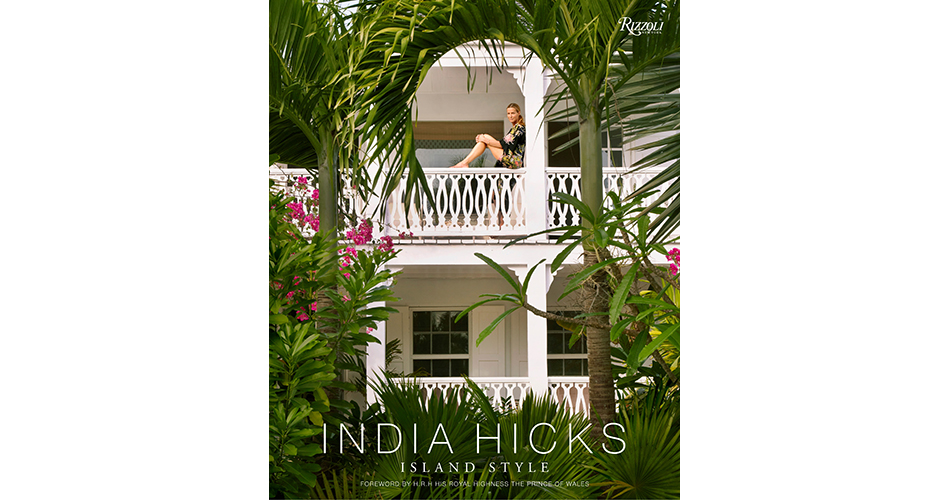