Let there be no doubt about it, suave as he was, with his bespoke suits, slicked-back hair and patrician good looks, David Nightingale Hicks (1929–98) was a committed revolutionary. Composing rooms of arresting opulence through his magisterial orchestration of cacophonous colors and patterns, Italian modern mixed with Louis XV furnishings and counterintuitive plays of scale, he forever rocked the stately world of interior design.

As a zealot of style, he took no prisoners. “Dedication to design means ruthless criticism and losing friends,” he once declared. He was not exaggerating. His wife claimed that he conceived his signature high-gloss brown walls as a result of her throwing glasses of Coca-Cola at him during their alarmingly frequent marital spats.

By the time he was 25, Hicks, who had attended London’s Central School of Art and Design and endured a couple of arid years in the art department of the advertising agency J. Walter Thompson, had the crème de la crème of London society as clients — and he was being entertained by them! Within a few years, he was courting Lady Pamela Mountbatten, the daughter of Lord Mountbatten, the last British viceroy of India, and the uncle of Prince Phillip, Queen Elizabeth’s husband. They married in 1960 and acquired Britwell, a Georgian pile in Oxfordshire, which became the family seat, design lab and showplace.

The first truly modern interior Hicks ever designed was Lord John Cholmondeley’s penthouse overlooking Hyde Park, in 1967. The graphic boldness of the scheme — brightly colored walls outlined in dark hues and dynamic geometric-patterned carpets — echoed the energy and attitude of the hard-edge painting that was then at the fore. Here, as in all his interiors, he included what he called “tablescapes,” vignettes of artfully arranged objects and artworks that added interest and life to the room. They were soon widely copied. Another landmark interior came in the early 1970s, when he revived Baronscourt, a grand neoclassical house in Northern Ireland, by giving it an entirely contemporary decor.

In addition to his immense creative talent, Hicks had a keen entrepreneurial acumen and vision. While he could have made a fine business simply designing grand homes for the wealthy and titled, he expanded his studio to include offices, boutiques, restaurants, hotels and nightclubs. He had showrooms all over the world, and he embarked on licensing agreements for ranges of vividly hued, geometric-patterned sheets and towels, clothes, umbrellas and bags.

The British designer was as daring as he was debonair, deploying a brazen mix of colors and patterns that came to define the groovy-glamorous interiors of the Swinging Sixties. 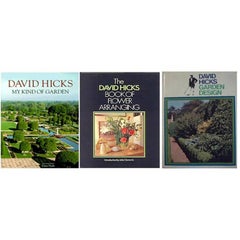 1960s VINTAGE TABLE IN BRASS SCULPTURE DESIGN DAVID HICKS
By David Hicks
Located in None, IT
Coffee table with gilded brass structure and glass top, design David Hicks, 1960s. CONDITIONS: In good condition, it may show signs of wear due to age, the glass has a small defect ...
Category

H 17.75 in. W 62.5 in. D 20.5 in.
Organic Coffee Table by Sam Forrest
By Sam Forrest
Located in St.Petersburg, FL
A fantastic, one-off coffee table by master studio craftsman Sam Forrest, circa 1969. Solid mahogany. Signed underneath and authenticated by the arist as one of his earliest, importa...
Category

H 18 in. W 42 in. D 27.5 in.
Snail Coffee Table
Located in St.Petersburg, FL
An unusual snail shaped coffee table, in the style of Selig, circa 1960s. Walnut with original glass.
Category

H 17.75 in. W 36 in. D 18 in.
Unusual Modernist Coffee Table Dunbar, 1970's
By Roger Sprunger
Located in St.Petersburg, FL
An unusual and most likely custom coffee table designed by Roger Sprunger and made by Dunbar, ca' 1970's. From an estate of a Indiana builder who purchased directly from Dunbar in th...
Category

H 44 in. W 29 in. L 44 in.
David Hicks Regency Armchair Black and White
By David Hicks
Located in Valladolid, ES
Amazing Regency armchair from Damien Hicks , it was giving as a present to the last property whose we purchased. Its a realy piece of collection !!!!!!!! Born in England in the coun...
Category

H 12.25 in. W 9.5 in. D 1 in.
David Hicks Living with Design Coffee Table Book
By David Hicks
Located in Lambertville, NJ
A very nice clean copy of David Hicks now out of print coffee table book, "Living With Color". Known as one of the most influential interior designer/decorators of the 20th century, ...
Category

Furniture by David Hicks are available for sale on 1stDibs. These unique items are often made from Paper, and are designed with extraordinary care. In our David Hicks collection, there are many options to choose from, although gray editions of this piece are particularly popular. There are 7 vintage versions of these items in stock, while there is 0 modern edition to choose from as well. During the 20th century, many of David Hicks' original furniture was created in the mid-century modern style in Europe. If you’re looking for additional options, many customers also consider furniture by Burton, Tri-Ang Toys and Allen Jones. David Hicks furniture prices can vary depending on size, time period and other attributes. The price for these items starts at $185 and tops out at $4,800, while pieces like these can sell for $350 on average.