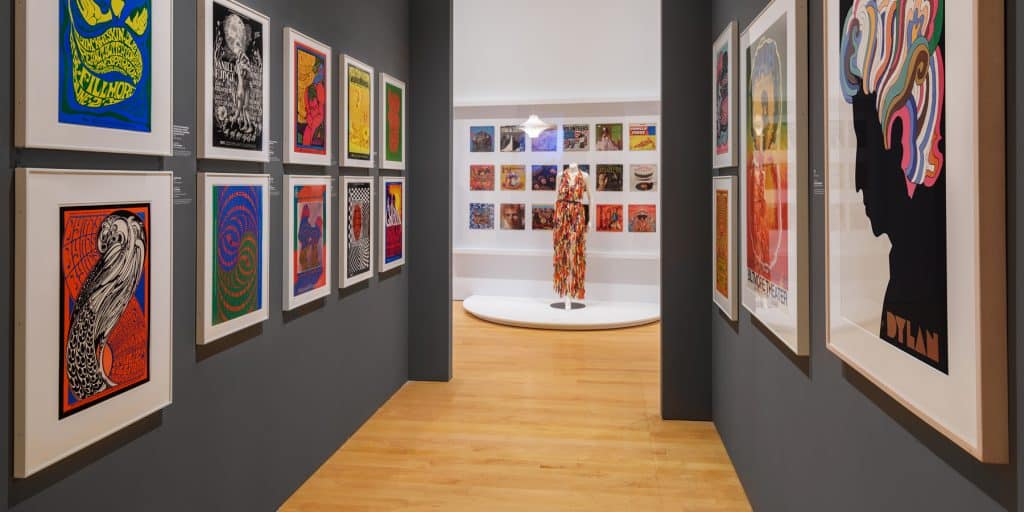 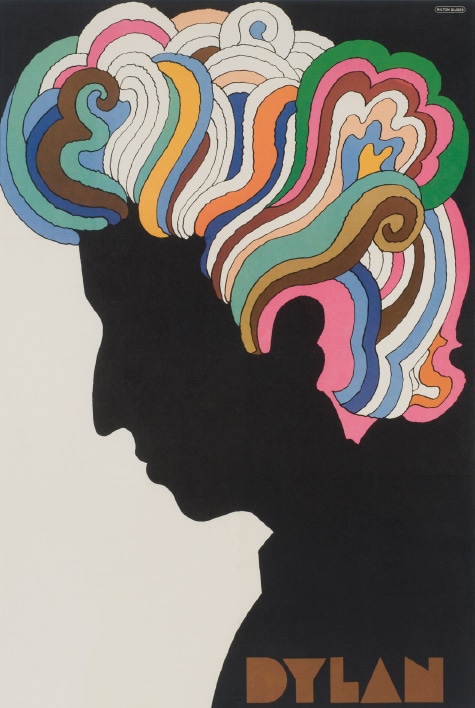 March 19, 2018Designed by Milton Glaser, “Bob Dylan” poster. Offset lithograph from an ink drawing with a Cello-Tak overlay. Designed 1966. Top: Installation view of the exhibition “Design in Revolution: A 1960s Odyssey.” Photo courtesy of Philadelphia Museum of Art, 2018. Photo by Tim Tiebout. All images courtesy of the Philadelphia Museum of Art

Anyone who thinks the 1960s are forgotten should get to Philadelphia to see “Design in Revolution: A 1960s Odyssey,” the Philadelphia Museum of Art’s lively new survey (through September 9) of what was probably the last century’s most volatile decade  — and one of the most influential in terms of design. The title, recalling both Stanley Kubrick’s seminal film “2001: A Space Odyssey” and Lesley Jackson’s erudite book The Sixties: Decade of Design Revolution, aptly describes an overview of highlights from the museum’s holdings that encompasses paintings, photographs, prints, drawings, fashion, architecture and design and suggests that more than a half-century after the decade’s passing, ’60s style continues to inform contemporary culture.

The Philadelphia exhibition captures the spirit of the time in themed sections, showing the influence of Op and Pop art in objects like tableware by Roy Lichtenstein, Robert Indiana’s Love Cross print and the Sacco beanbag chair. The Jet Age and futuristic living are highlighted in images of Eero Saarinen’s TWA Flight Center, Sue Palmer’s Space Walk fabric and Olivier Mourgue’s Djinn sofa. Political turbulence is recalled in photographs and video imagery of Woodstock and antiwar protests, and psychedelic record album covers evoke the mood of music by David Bowie, the Rolling Stones and others.

The exhibition doesn’t suggest a universal theme, or a simple story. Unlike most historic periods, the 1960s can’t be summed up in one descriptive phrase, or even in a series of museum galleries. The decade was too diverse, encompassing highs and lows, strengths and weaknesses, achievements and failures. How can we label a period that included such landmark events as the moon landing and the rise of the Berlin Wall, historical developments like the counterculture and the civil rights movement and cultural touchstones like rock ’n’ roll and miniskirts? Although they disrupted everyday life, the many, varied events and influences produced a burst of energy and experimentation in both fine and decorative art. The results were lively, provocative and, notwithstanding occasional missteps like lava lamps and shag carpets, generally worth keeping. The functionalism of the 1950s transitioned to a new, optimistic style of design that looked forward to a happy future.

Unlike most historic periods, the 1960s can’t be summed up in one descriptive phrase, or even in a series of museum galleries. 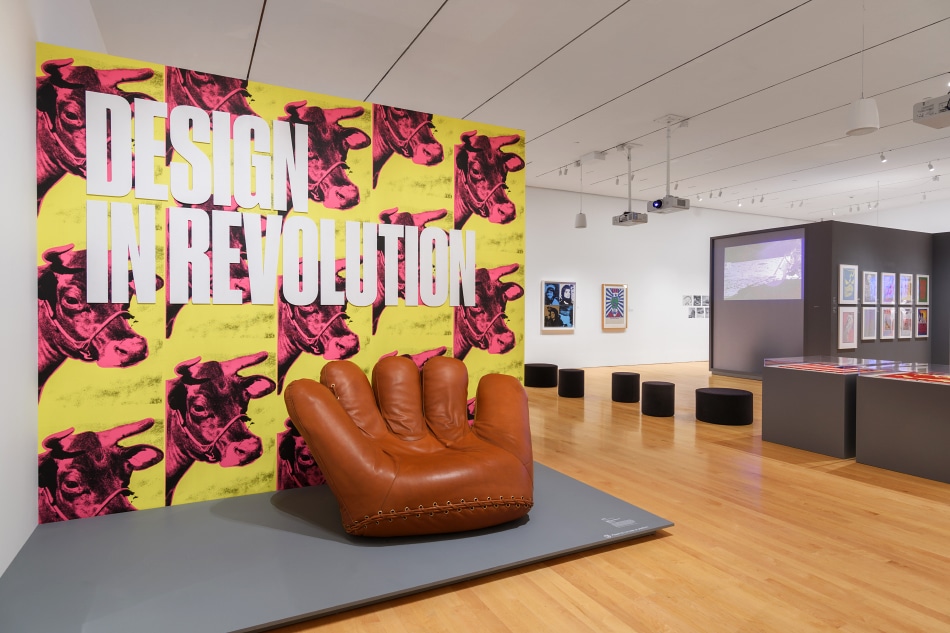 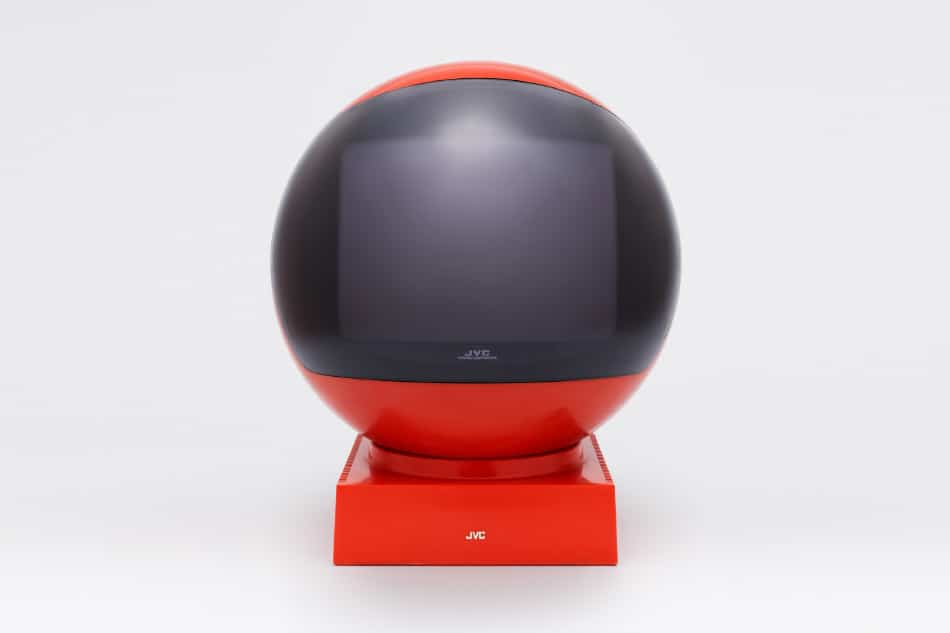 This videosphere television, designed in 1970, was made for the Victor Company of Japan, Ltd. 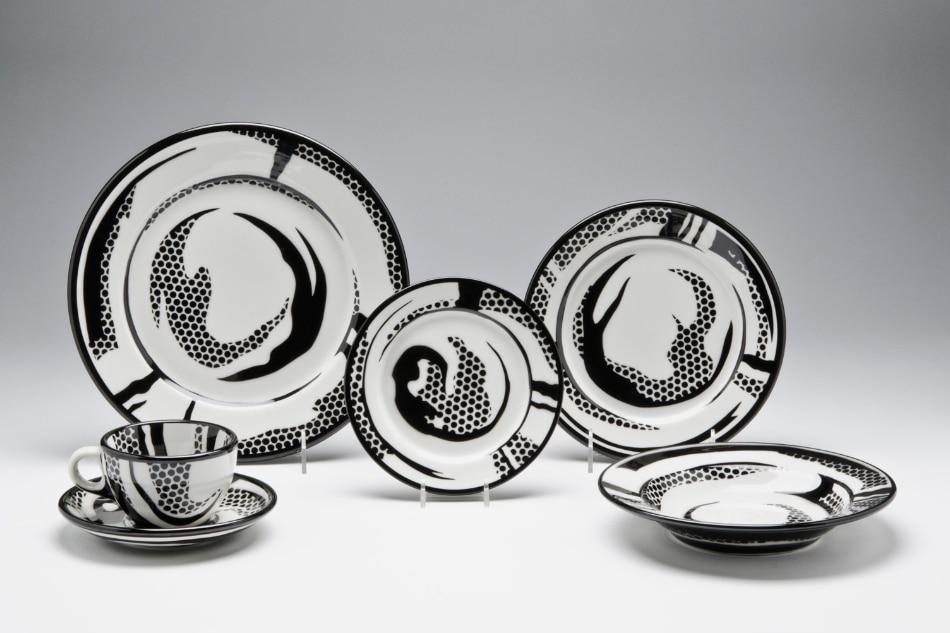 Roy Lichtenstein designed this dinner service, made from earthenware with enamel decoration, in 1966. 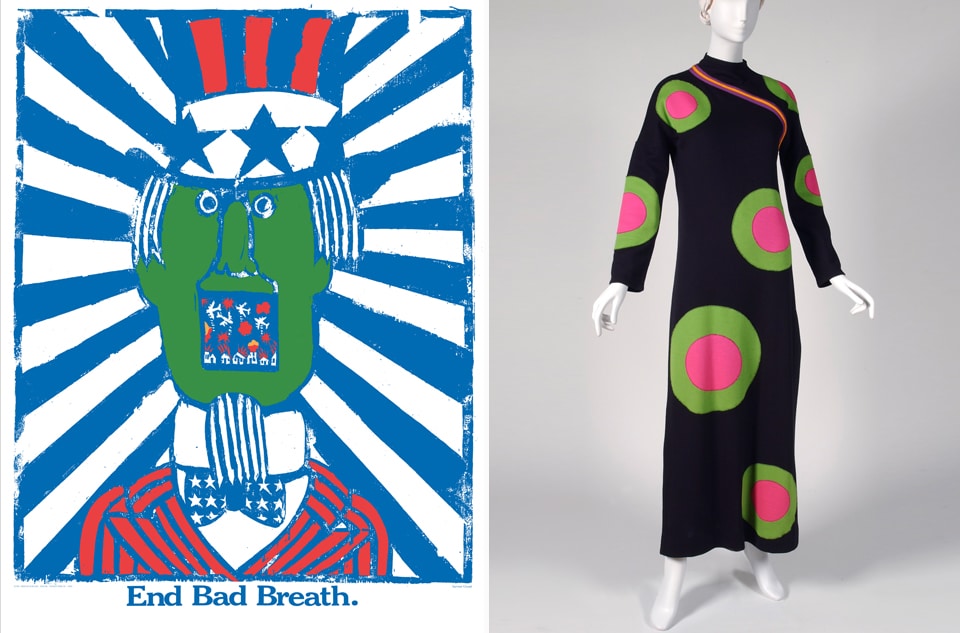 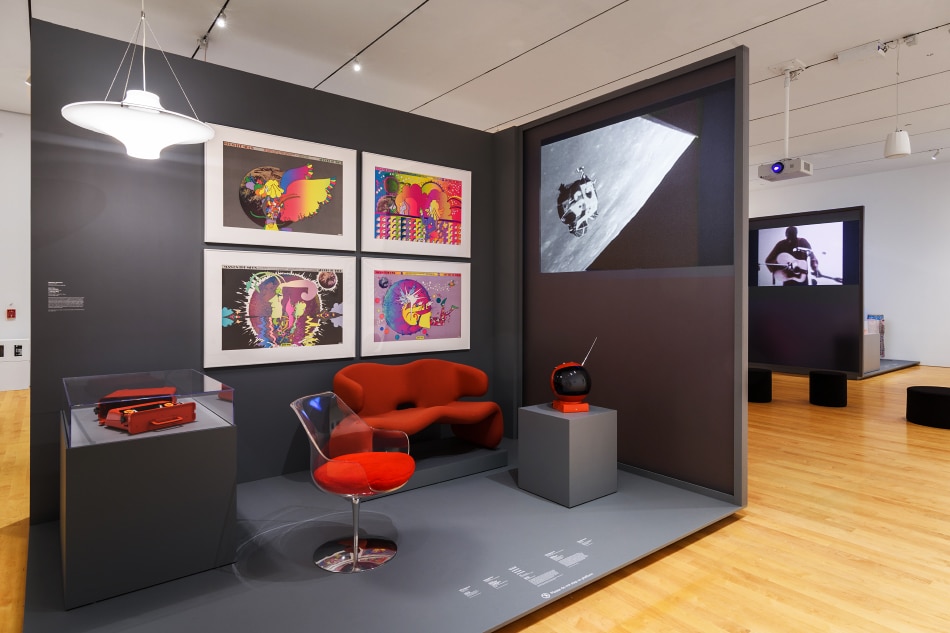 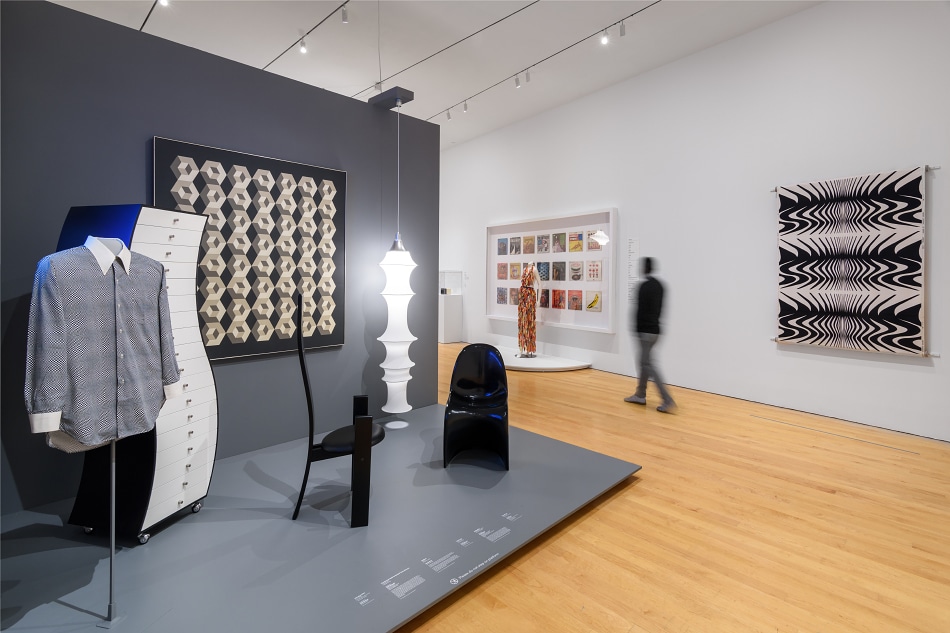 Hot Blocks, 1966-67, by Edna Andrade is displayed in the installation, along John Stephen’s Op Art shirt, ca. 1965, and Shiro Kuramata’s “Furniture in Irregular Forms: Side 2” chest of drawers, 1970. Photo courtesy of Philadelphia Museum of Art, 2018. Photo by Tim Tiebout 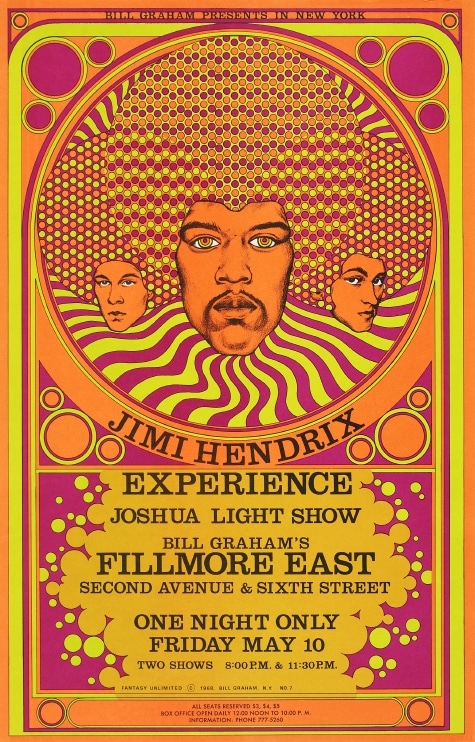 From 2007 to 2015, Americans were seduced by 1960s style in 92 episodes of “Mad Men,” and the aftereffects are still being felt in the marketplace. Today’s interiors and furniture build upon the obsession with mid-century modern that marked the first years of the current century. Interior designers and collectors are increasingly looking at furniture of the period from Italy and France. Such pieces as Joe Colombo’s Tube chair and puzzle-like 4801 plywood lounge chair, Achille Castiglioni’s Arco lamp and Pierre Paulin’s Ribbon chair have become icons of 1960s design that played with form and color. The decade saw the proliferation of plastics in blow-up chairs, injection-molded seating and space-age seats wrapped in fiberglass, like Eero Aarnio’s Ball chair. These and others are showing up in galleries and auction houses, as well as in fashionable interiors.

With assistance from Op and Pop art and psychedelia, design came into its own in the 1960s as a topic of public interest, making news and influencing popular culture. Fashion and interior design followed similar trajectories: David Hicks splashed his rooms with bold graphic patterns, Marimekko adapted Op art imagery to fabrics and dresses, and Rudi Gernreich made women’s clothing — and bathing suits — into extroverted conversation pieces. In graphic design, pieces like Milton Glaser’s psychedelic Bob Dylan poster became archetypal images of the period and respected works of art.

The most prominent American interior designers of the decade included Bloomingdale’s-based Barbara D’Arcy, whose model rooms were must-see showcases; Billy Baldwin; Angelo Donghia; and the flamboyant partnerships of Zajac and Callahan and Denning and Fourcade, which took more eclectic approaches to decorating spaces, mixing patterns and periods. Altogether, there were fewer rules to follow and a less straightforward path to the perfect room. Curved walls and conversation pits coexisted with mirrored screens and patterned wallpaper, breaking the barriers erected by International Style purists.

Although most 1960s interiors have been redecorated and the vintage design market may move in other directions, some important architectural landmarks are very much in fashion. The TWA Terminal at John F. Kennedy Airport is being converted to house a destination hotel, and Moshe Safdie’s Habitat, built for the 1967 Expo in Montreal and still fully occupied, is the inspiration for modern capsule-apartment buildings — evidence that, after all these years, the ’60s revolution remains a source of good design ideas.